Pinsk has long been the unofficial capital of Polesie. It is second only to Grodno in size and the degree of preservation of the historic center. In this city you can see many monuments of architecture that reflect its rich history, which began in the XI century. 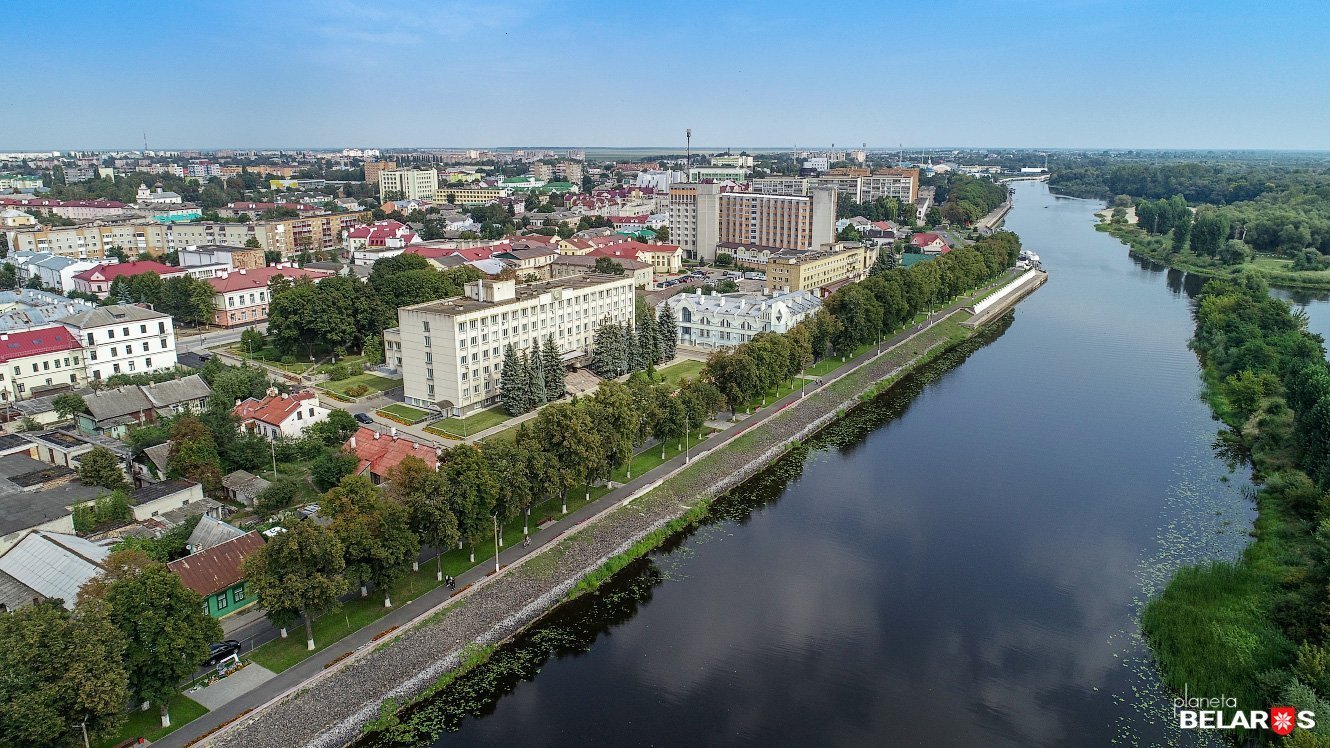 The city is located on the banks of Pina. It is located in the place where two channels at once flow into it: Oginsky and Dneprovsko-Bugsky. Nearby there is the highway M10 (Gomel-Kobrin). The population of Pinsk is almost 138 thousand people.

The Old Town of Pinsk can without exaggeration be called a real encyclopedia of architecture. It is decorated with temples, palaces and other buildings, representing almost all architectural styles that have ever been spread in Belarus. You can enjoy one of the most beautiful panoramas of the city from the walking ship "Polesie", cruising on Strumeny and Pina.

Founded in the XVII century, it was one of the oldest and most prestigious educational institutions on Belarusian soil. Together with the Church of St. Stanislav the Jesuit College was the main decoration of the city. To this day this imposing building, which houses the Museum of Belarusian Polesie, is a kind of business card of Pinsk and its unofficial symbol. 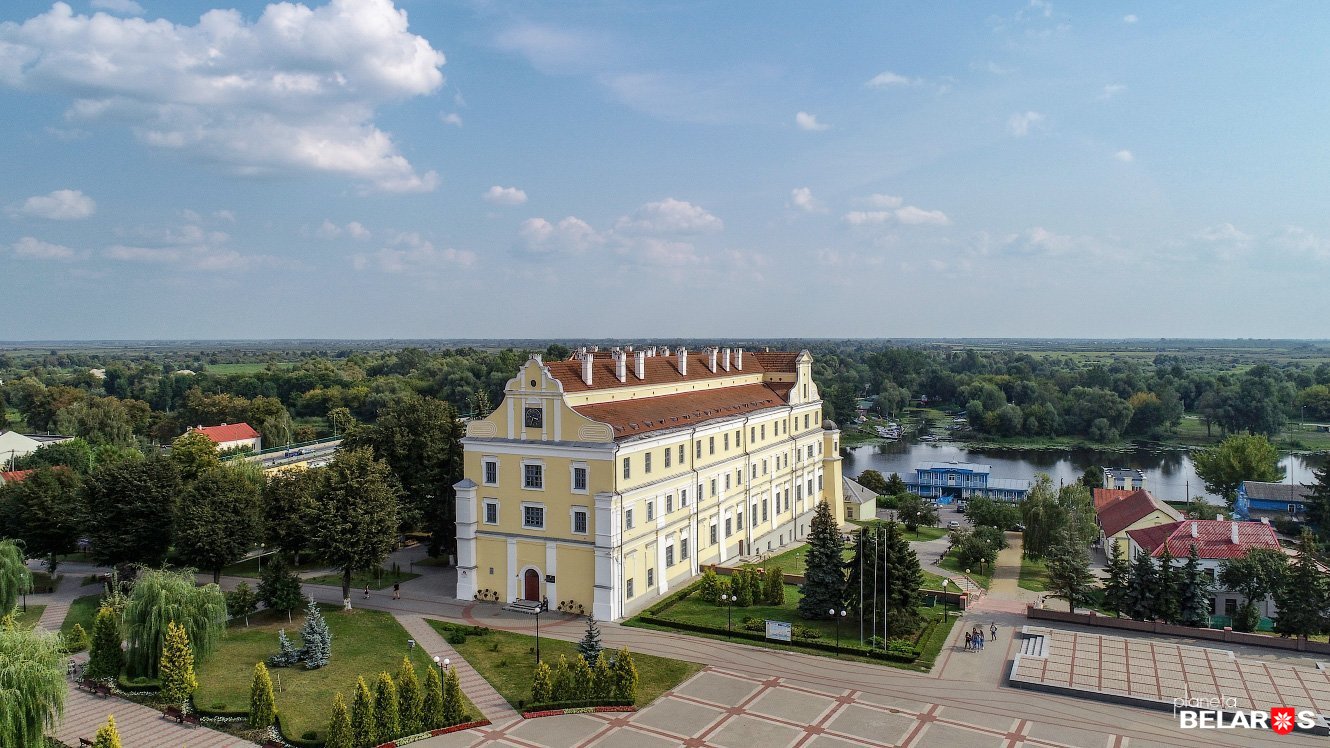 3. Listen to the organ in the Church of the Virgin Mary Ascension.

This temple, which used to be part of the Franciscan monastery, was built in the first third of the XVIII century and has the status of one of the three small basilicas located in Belarus. 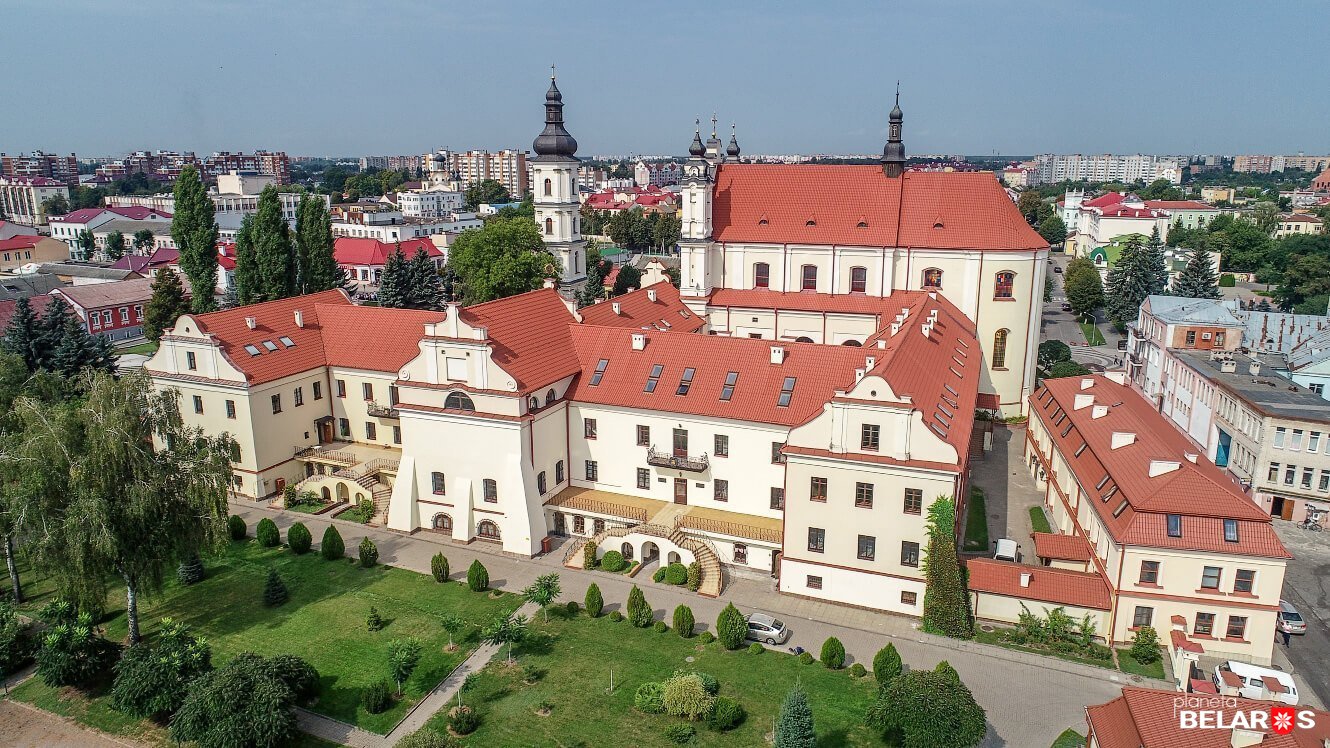 It is famous not only for its lush facade, but also for the interior, which is decorated with bright wall paintings, carved altars and, of course, the organ, which is over 100 years old. This instrument is used not only during divine services, but also for concerts.

4. Feel the spirit of antiquity

For centuries Pinsk was the economic and cultural center of Polesie. Numerous sights remind about those times: palaces, churches and churches. No one will be left indifferent to ordinary buildings, consisting of two- and three-storey houses, erected even before the revolution. They perfectly convey the atmosphere of a busy county town.

Since the city lies on the banks of the Pina river, which is in turn a tributary of the Pripyat, it is convenient to use it as a starting point to travel along this river, nicknamed for the beauty and pristine nature of the Belarusian Amazon. 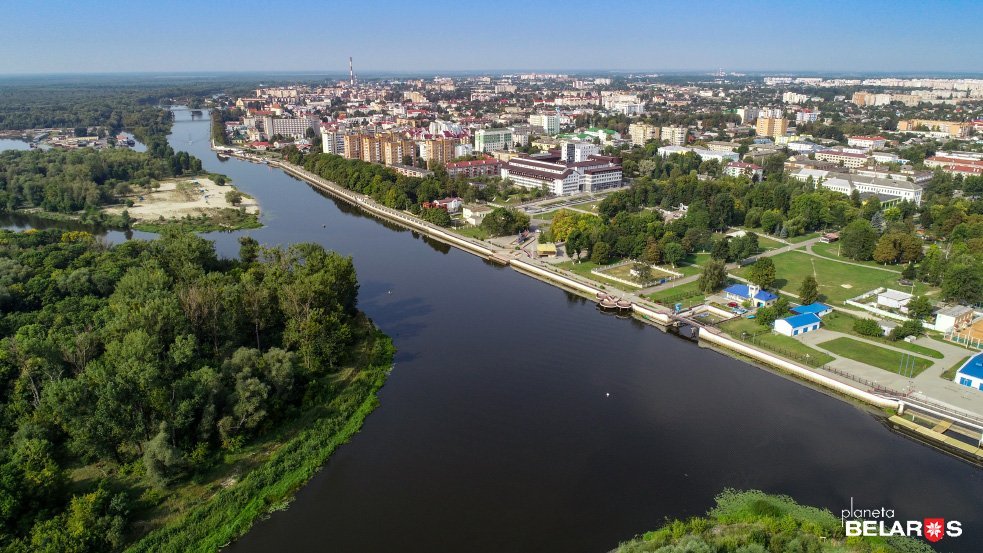 This is the best way to see floodplain oaks, ancient lakes and other landscapes. Or you can head in the other direction, along the Dnieper-Bug (former Royal) Canal - a unique hydraulic structure of the late XVIII century, which connected the basins of the Black and Baltic Seas to see the ancient locks and picturesque shores.

Some researchers calculate the history of Pinsk from the VIII century. It was then that one of the oldest Slavic settlements found in Belarus was founded near the village of Gorodishche. It is often considered to be the predecessor of the modern city, which for unknown reasons was moved to another place.

The first written mention of Pinsk dates back to 1097. At that time it was part of Kievan Rus and eventually became the capital of an independent princedom, which in the XIV century joined the Grand Duchy of Lithuania as a province. In 1521, when the last representative of the Pinsk princely dynasty died, the Polish king Gigimont I presented these lands to his wife Bona Sforza, who carried out reforms in Pinsk region, and also made the first attempts at melioration.

Numerous wars of the second half of the XVII and early XVIII centuries, of course, did not bypass this region. Many settlements were looted and destroyed. However, Pinsk, which according to the privilege of Stefan Batory in 1581 received the Magdeburg Law, remained the economic and cultural center of Polesie all this time, despite the hardships.

In 1793, after the second partition of the Polish-Lithuanian Commonwealth, the city, as well as the entire region, became part of the Russian Empire, becoming part of the Minsk Province (at that time it was also called the viceroyalty). Pinsk received the status of a county town and continued its successful development, taking advantage of the long period of relative peace.

It was violated by World War I. After a series of defeats suffered by the Russian army, the front line reached the Oginsky and Yaselda channels. Pinsk became a front-line city, and in September 1915 it was occupied by the Kaiser troops, which forced many local residents to become refugees.

The results of the Soviet-Polish war, which ended with the signing of the Riga Peace Treaty, were not in favor of the USSR. As a result, it was forced to cede significant territories, including Pinsk county, which was annexed to the Polesie voivodship and remained in its composition until September 1939, when the region was occupied by Soviet troops.

Already on December 4, 1939 was issued a decree of the Presidium of the Supreme Soviet of the USSR, according to which a separate region with a center in Pinsk was created. The fascist occupation that began in June 1941 lasted exactly three years. At that time, the underground workers were operating in the city. Many members of the local Jewish community died in ghettos or concentration camps.

Many industrial enterprises were built in the post-war years, which turned the city into one of the industrial centers of Belarus. In 1954 Pinsk region was abolished. And the city received the status of a district center in the Brest region.

The modern coat of arms of Pinsk, which was registered on June 21, 1996, in general reproduces the one that was given to him at the end of the XVI century. The image of a stretched bow indicates the border position of the city, which was ready at any moment to repel an enemy attack.

In addition to the Jesuit collegium and Franciscan monastery with the Church of the Assumption of the Virgin Mary, which is considered a Baroque gem, Pinsk adorns many other historical monuments. They are a clear proof of the importance that this city had in the Middle Ages and subsequent epochs.

Butrimovic's Palace, built at the end of the 18th century on the main street, embodies the transition from Baroque to Classicism. This also applies to the interior decoration, which combines the features of both styles. The small front courtyard facing the river has turned out to be cozy, especially against the background of a symmetrical facade devoid of bright ornaments. 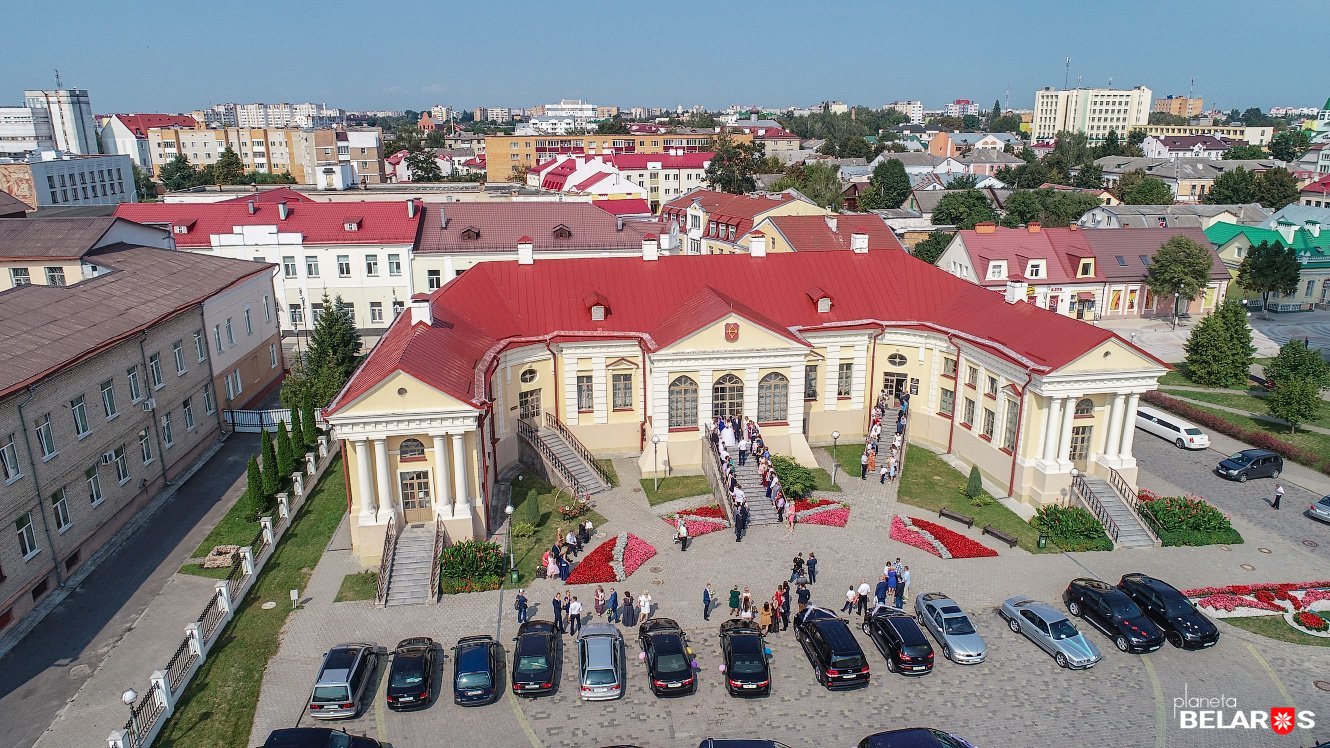 In the same transitional style, the Church of St. Baromey was also erected. This is not surprising, as both buildings date back to the same historical era. This temple is interesting because its typical Baroque elements, including the completion of the tower, are combined with elements that were inherent to the castle architecture. 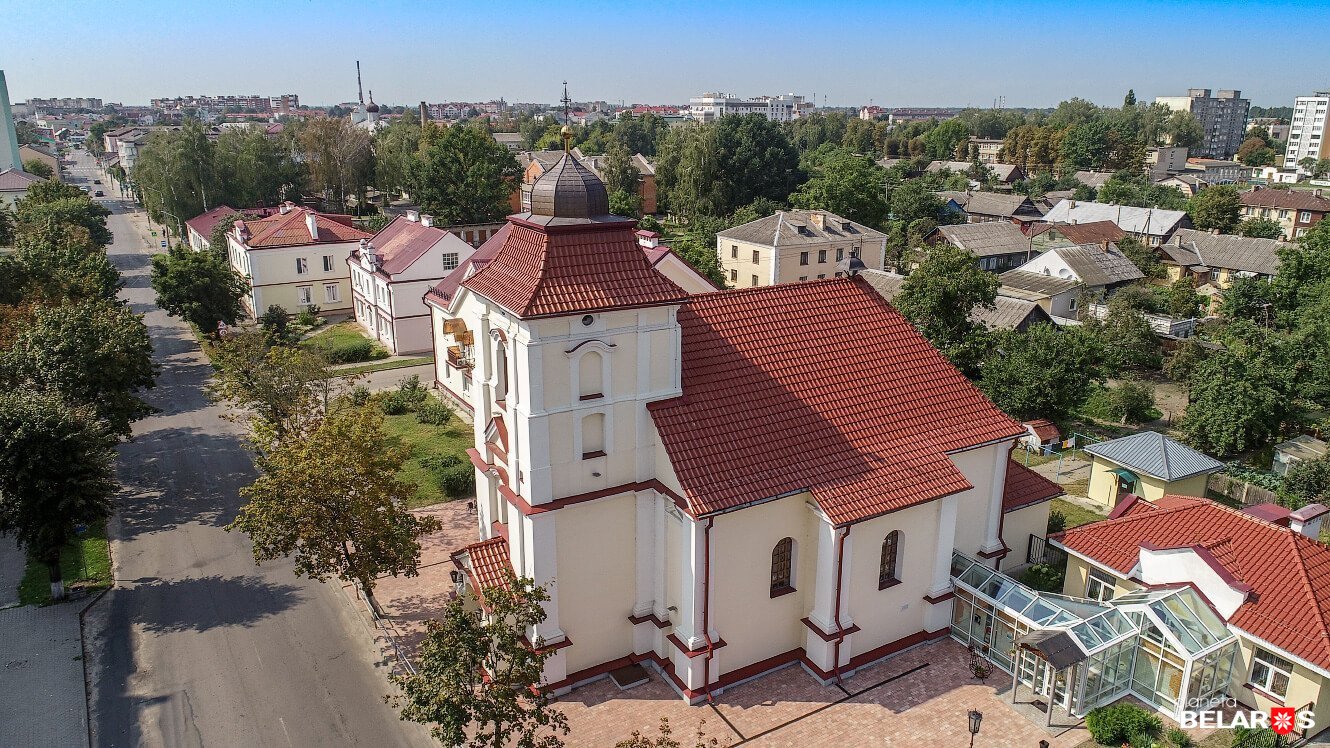 The former Bernardine monastery became Orthodox over time. Its main temple after minor reconstruction is now known as St. Varvara Cathedral. Much later, in the 1990s, the complex was supplemented with another cult building. We are talking about the Church of the Resurrection of the Slovakian, which combines features of Baroque and retrospective Russian style. 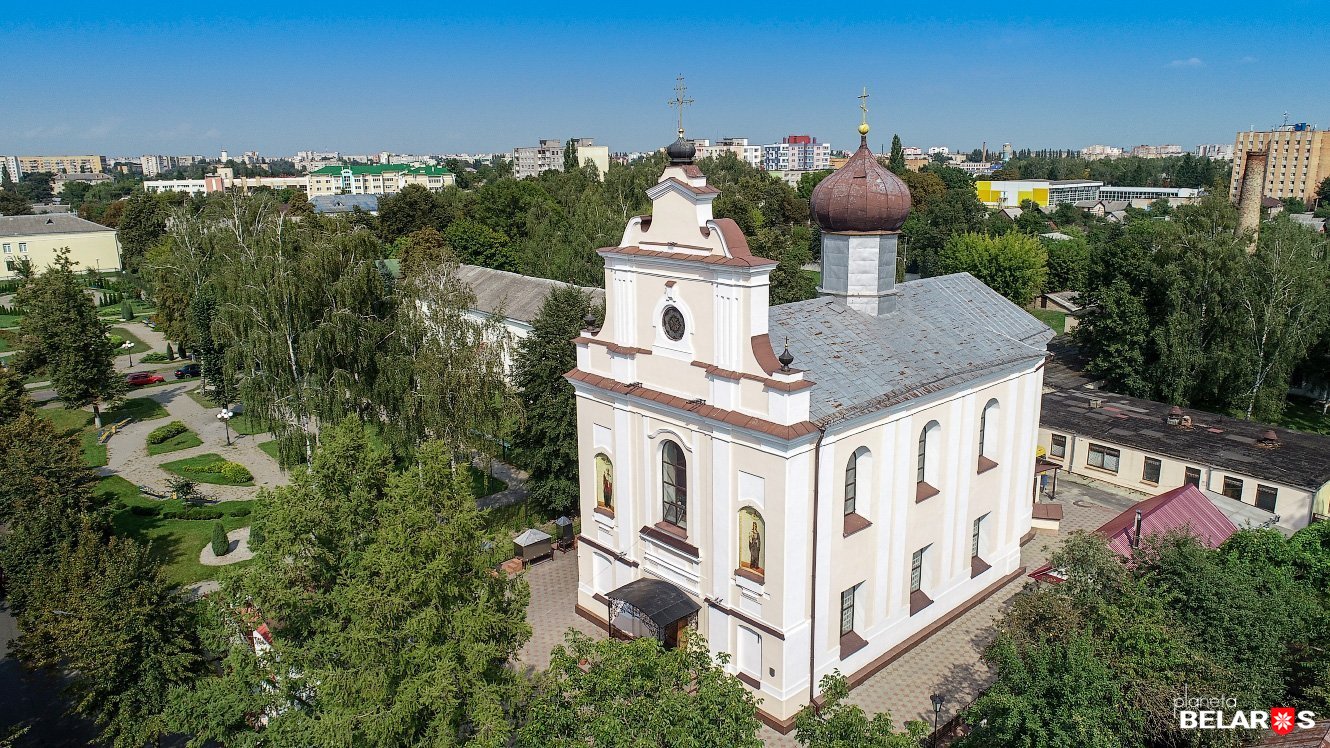 An important sight of the city is the shady Pina embankment. Walking along it you can reach the river station building, which was built of wood in the first half of the 20th century. Another decoration of the embankment is the warship "BK-92". It reminds about the landing of the Dnieper sailors, who liberated the city in June 1944. 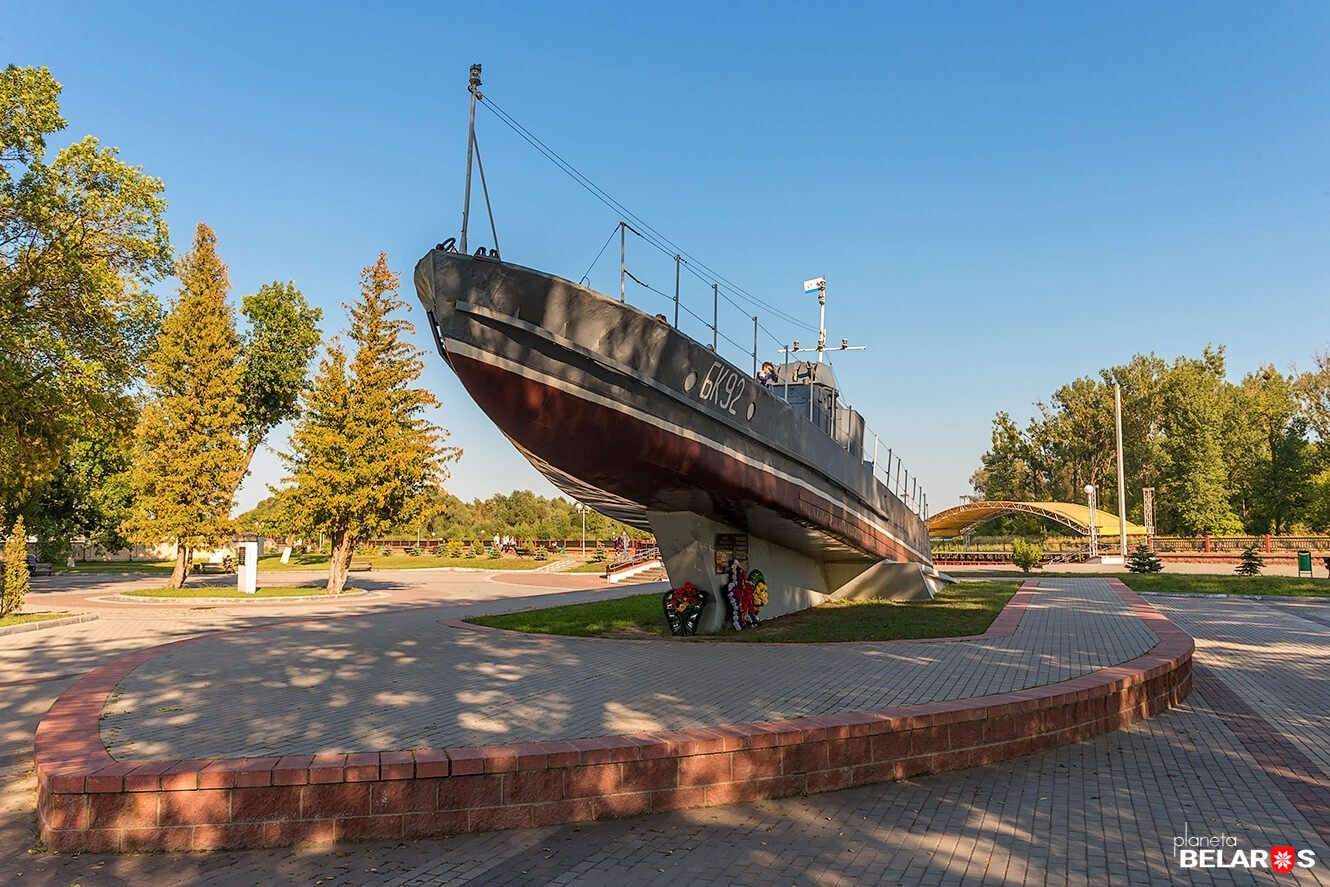 Among the interesting monuments are the memorial complex "Partisans Polesia" and a sign in honor of the construction of the road Pinsk-Brest. Of interest to tourists are the buildings of the Azov-Don, Agricultural and Credit Bank, built in the Art Nouveau style. A striking example of industrial architecture of the XIX century is the former Pinsk Match Factory.

Ryszard Kapustinski is known as the Polish journalist nicknamed "Reporting Emperor", his small homeland is Pinsk. As a correspondent for the Polish Press Agency, he has visited many countries around the world and collaborated with the Paris-based magazine Kultura. Ryszard Kapustinski's reports, published in separate collections, have been translated into many languages and have won literary awards more than once.

Also in Pinsk was born Simon Kuznets, who later became one of the most famous economists of the twentieth century and a Nobel Prize winner for 1971. It was largely thanks to him that economy turned from theory into an empirical scientific discipline. Simon Kuznets also contributed greatly to the development of such disciplines as statistics and demography.

The famous architect Ivan (Jan) Zholtovsky, who became one of the brightest representatives of the so-called "Stalinist architecture", was also born in this city. An important part of life of Golda Meir and Chaim Weizman, who played an important role in the establishment of Israel as a state, is also connected with Pinsk.

Every year Pinsk hosts the Zori Nad Pina Art Festival. In 2018, the Gorodische-Pinsk Festival of Local History was organized near the city for the first time. The Church of the Assumption of the Virgin Mary regularly hosts organ music concerts.

In Pinsk there is no shortage of traditional souvenirs with symbols of the city and the image of the most significant sights. One shouldn't forget that the nearby village Horodishche has an unofficial title of the tomato capital of Belarus, and in June Pinsk strawberries are sold at the city markets.

In the center of Pinsk you can easily find a variety of catering establishments: restaurant "Andre", cafe "Atmosfera" and others.

In Pinsk you will find the Aelita and Volna hotels and the Pripyat hotel and entertainment complex.

How to get there

Not far from Pinsk runs the M10 highway, which connects Brest with Gomel. The area has a developed road network. If necessary, you can also easily get here by bus or shuttle bus. Railway service connects Pinsk with Brest, Gomel, Minsk and Vitebsk, as well as with many other cities. 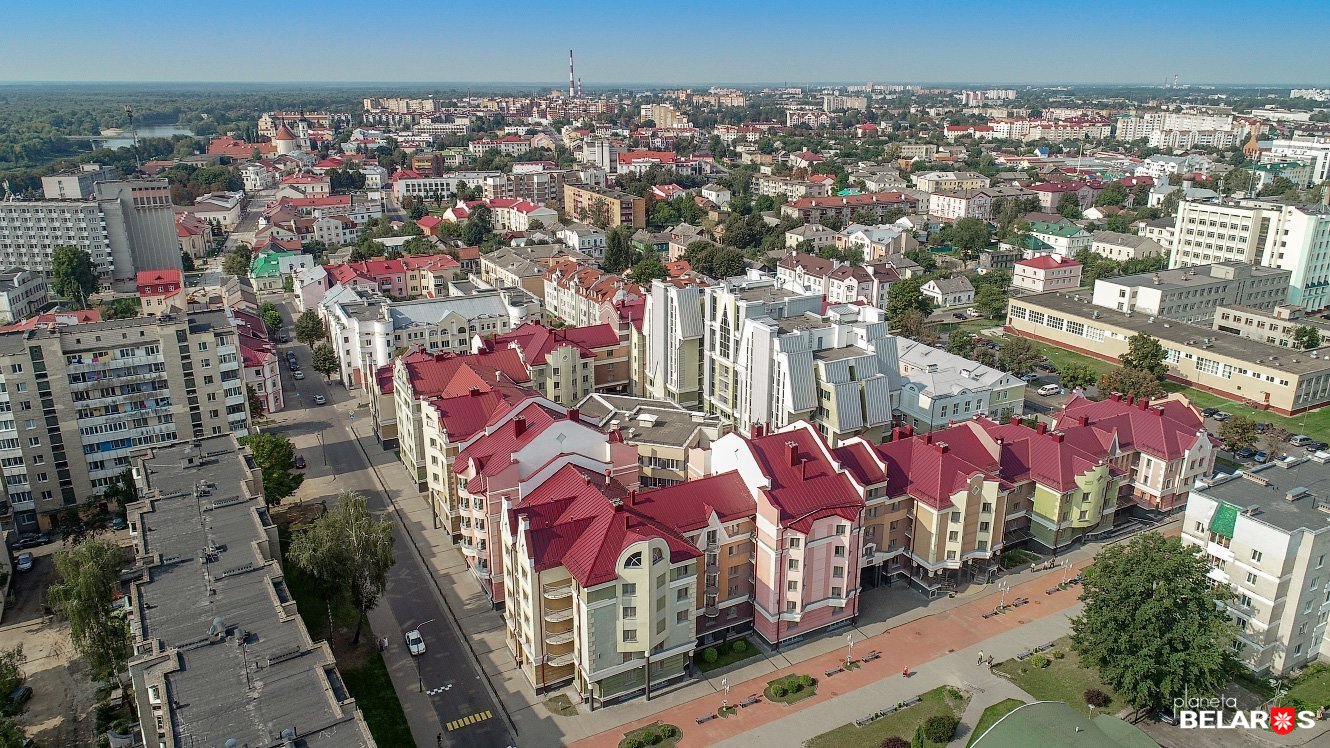