Last Thursday and Friday we decided to devote to the Vitebsk area. I wanted both to photograph the lekking Eurasian Capercaillie (Tetrao urogallus)  in the “Paozyorie” sanctuary, and to float the Drissa River between the frozen lakes in the “Sinsha” reserve. My friend Cyril who has an inflatable boat with a motor, liked the idea very much, and my wife Natalia supported it. Thus, we planned to leave Minsk at eight in the morning. 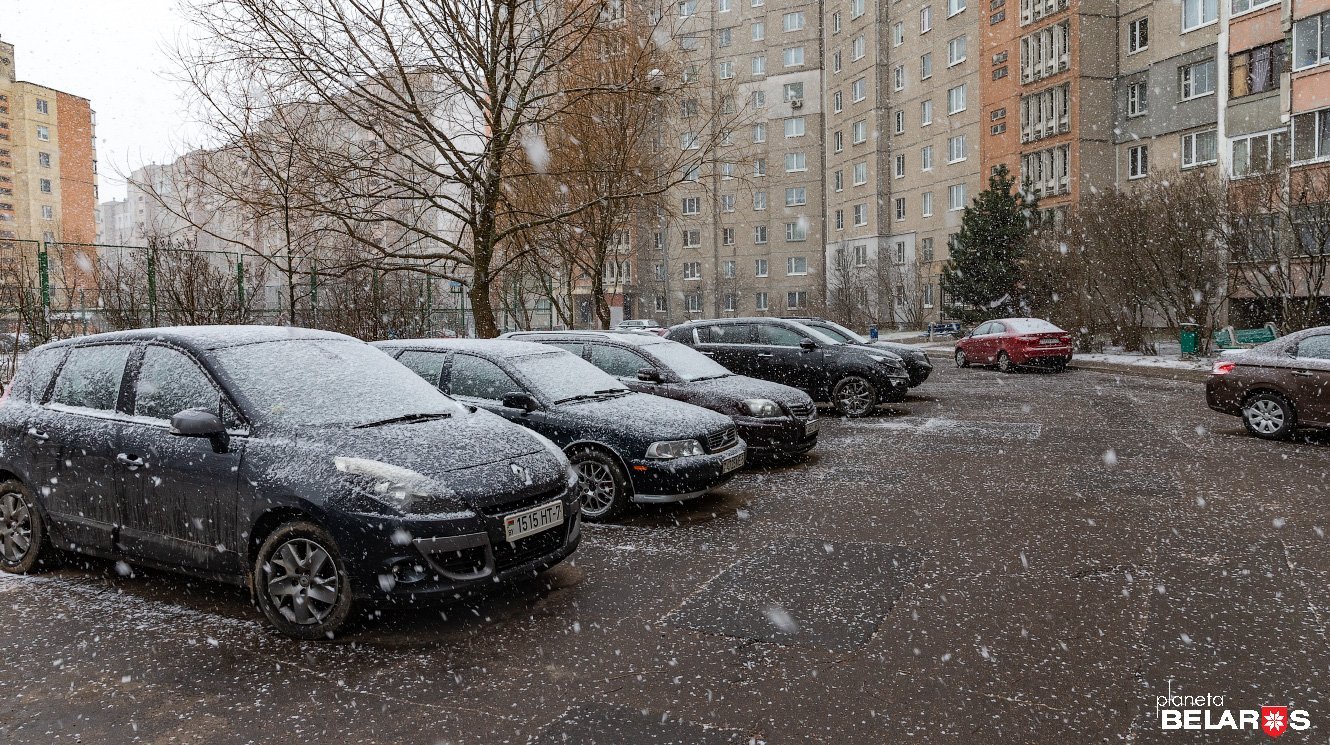 I got out about ten minutes in advance to pack my things in the car. And at that moment, the snow began to fall. 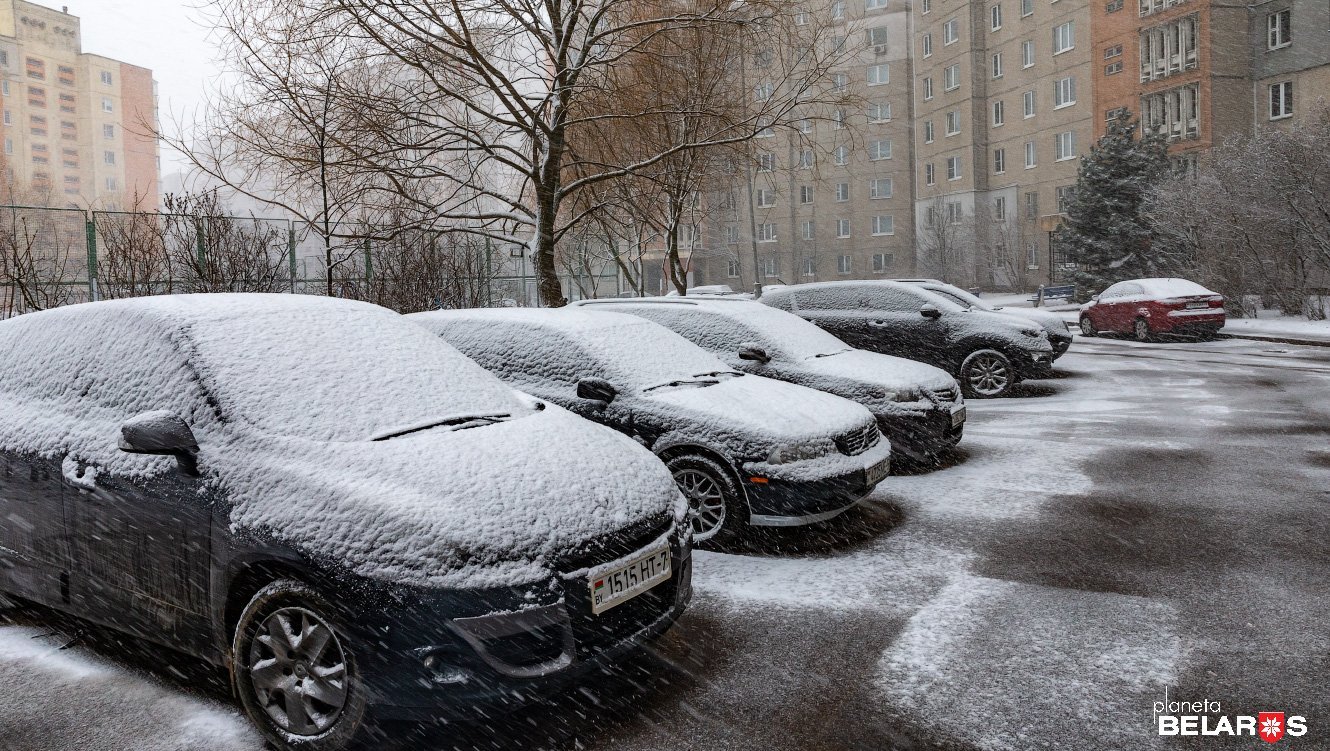 Right before our eyes, our yard began to change its appearance, cars started to get wrapped in snow coats. 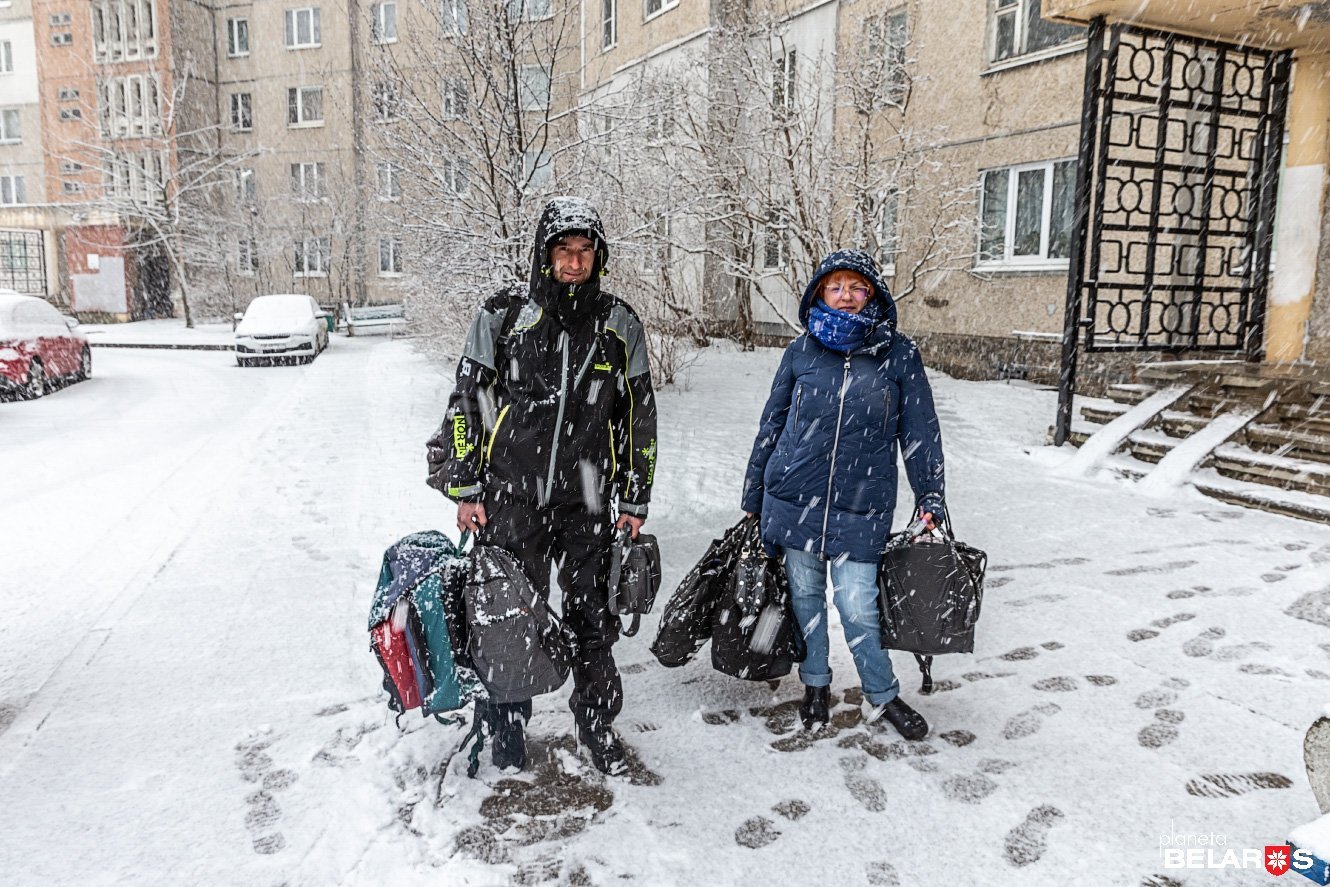 A pleasant setting for starting a boat trip, isn't it? 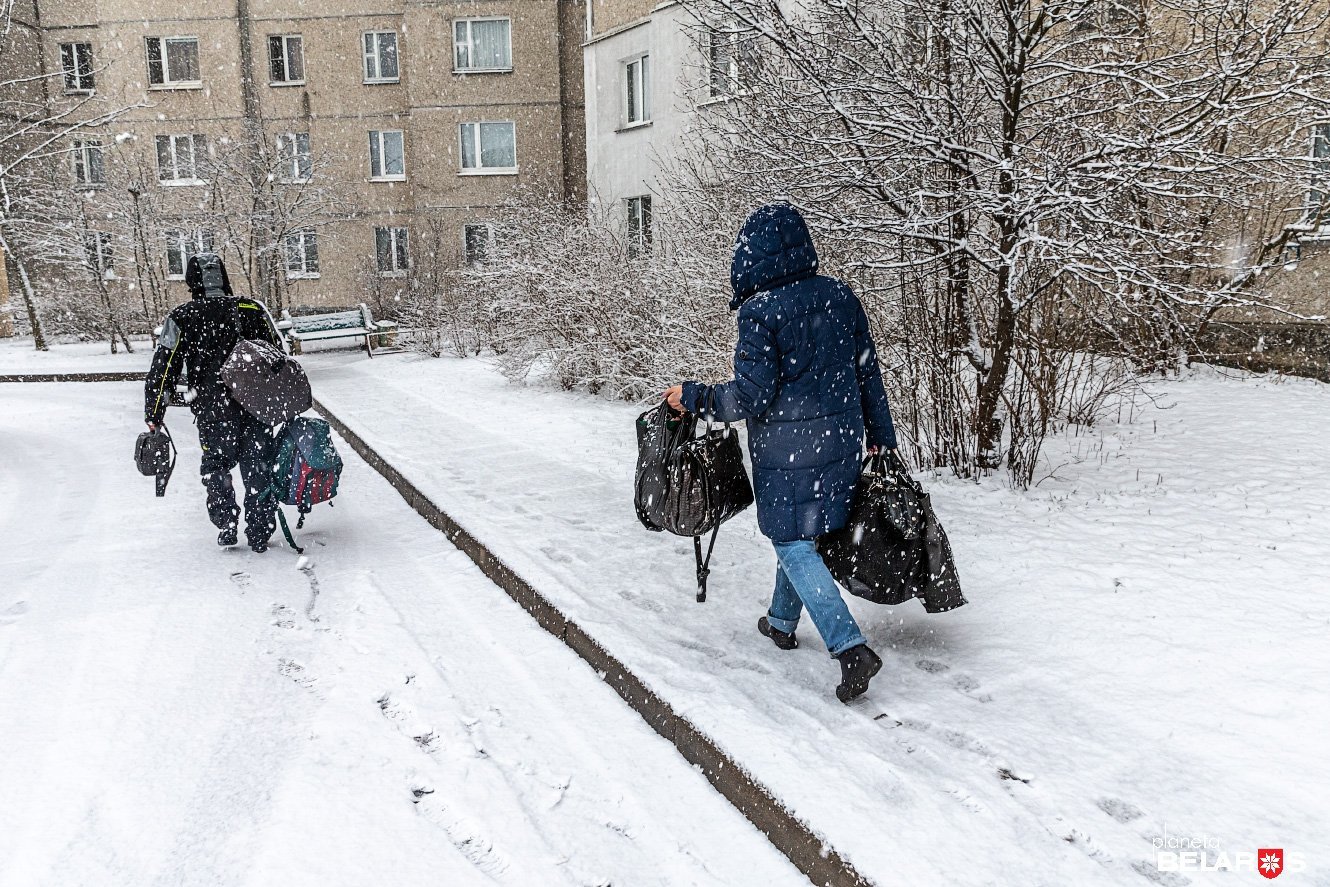 But we were carrying things and photographic equipment, since Cyril could not enter our yard on a car with a trailer. 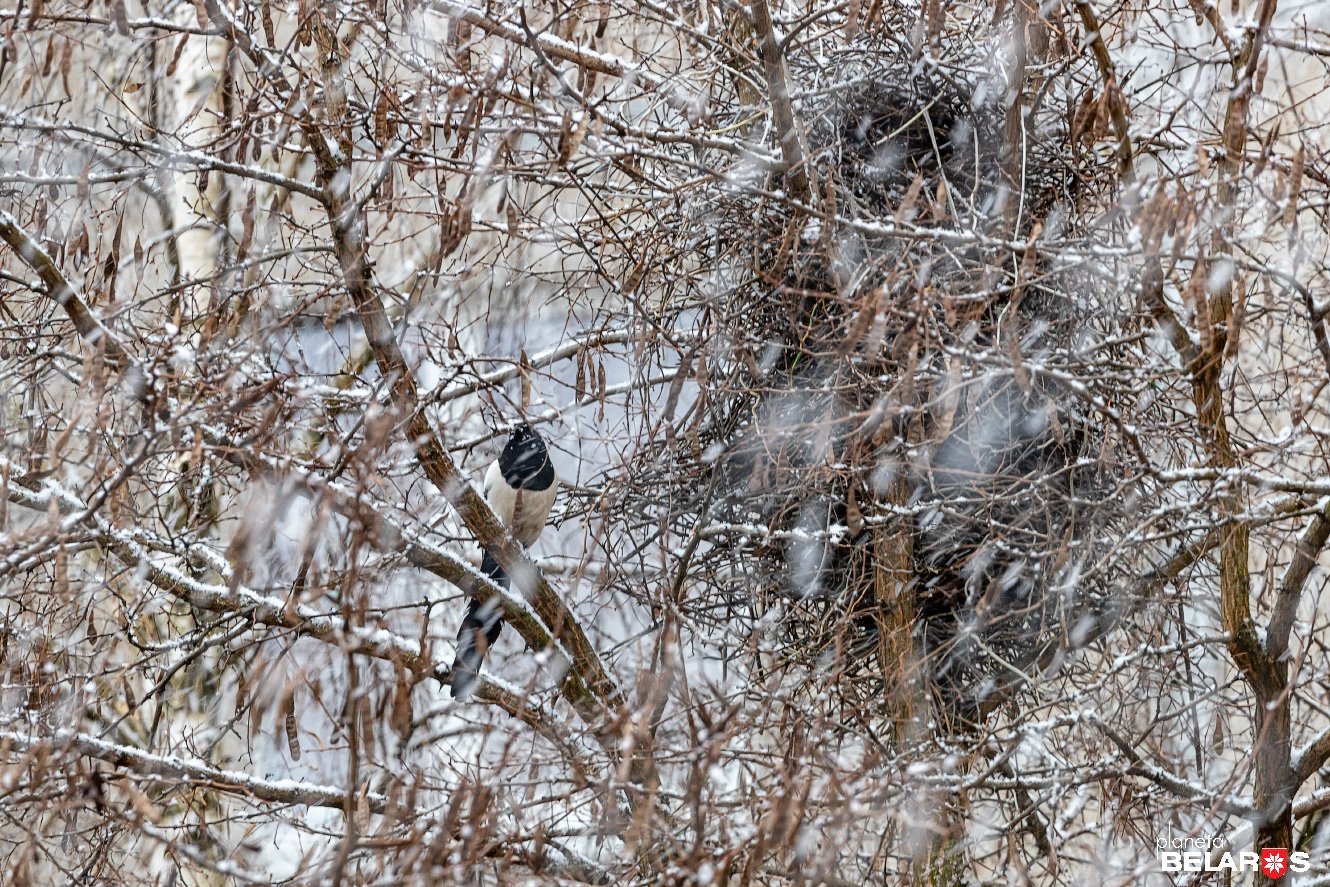 A magpie looks at us reproachfully from above; its question can be guessed: "Where are you, fools, going in such a heavy snowfall?» 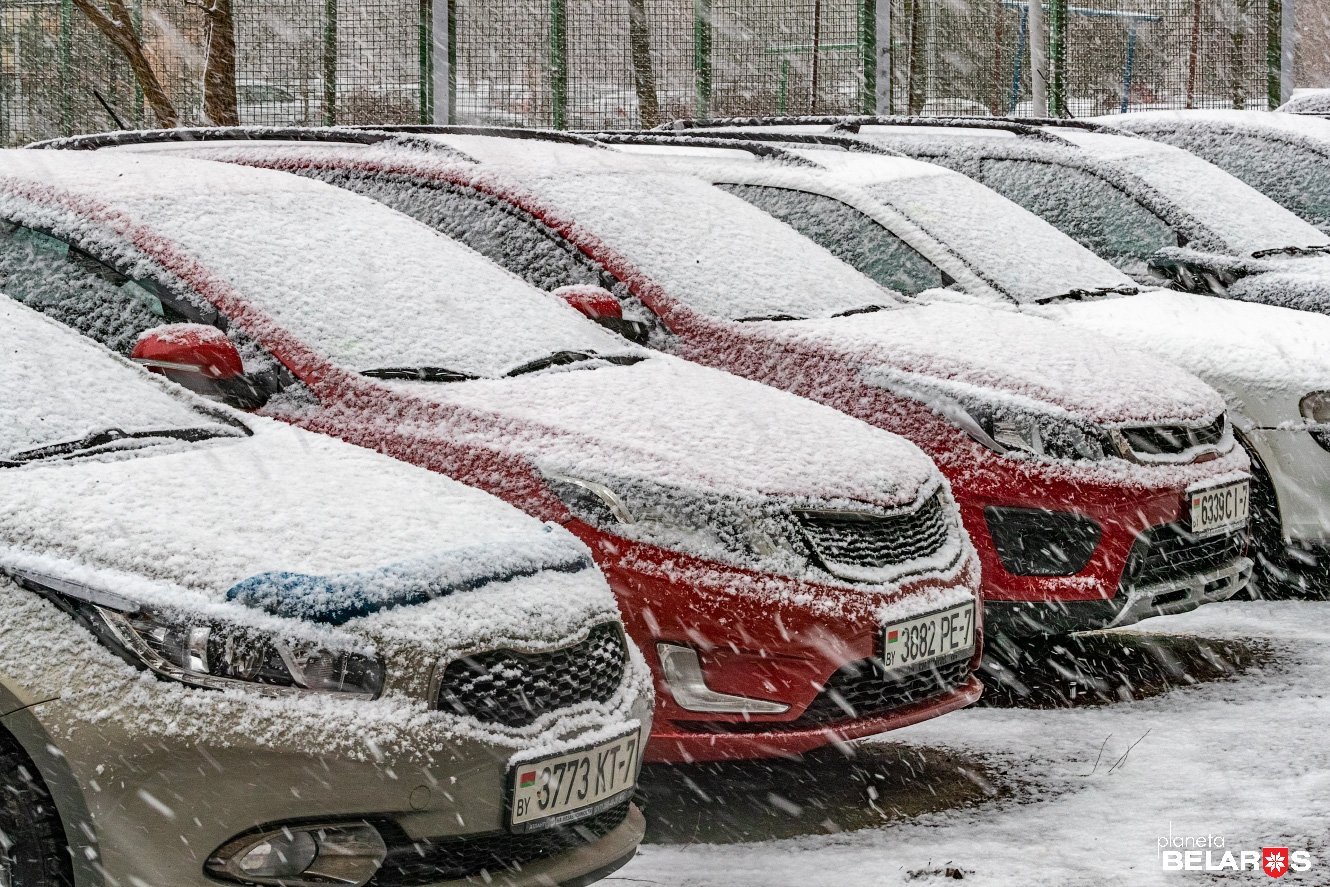 Yeah, our desire to go to the north of Belarus looked strange when this north itself came here! 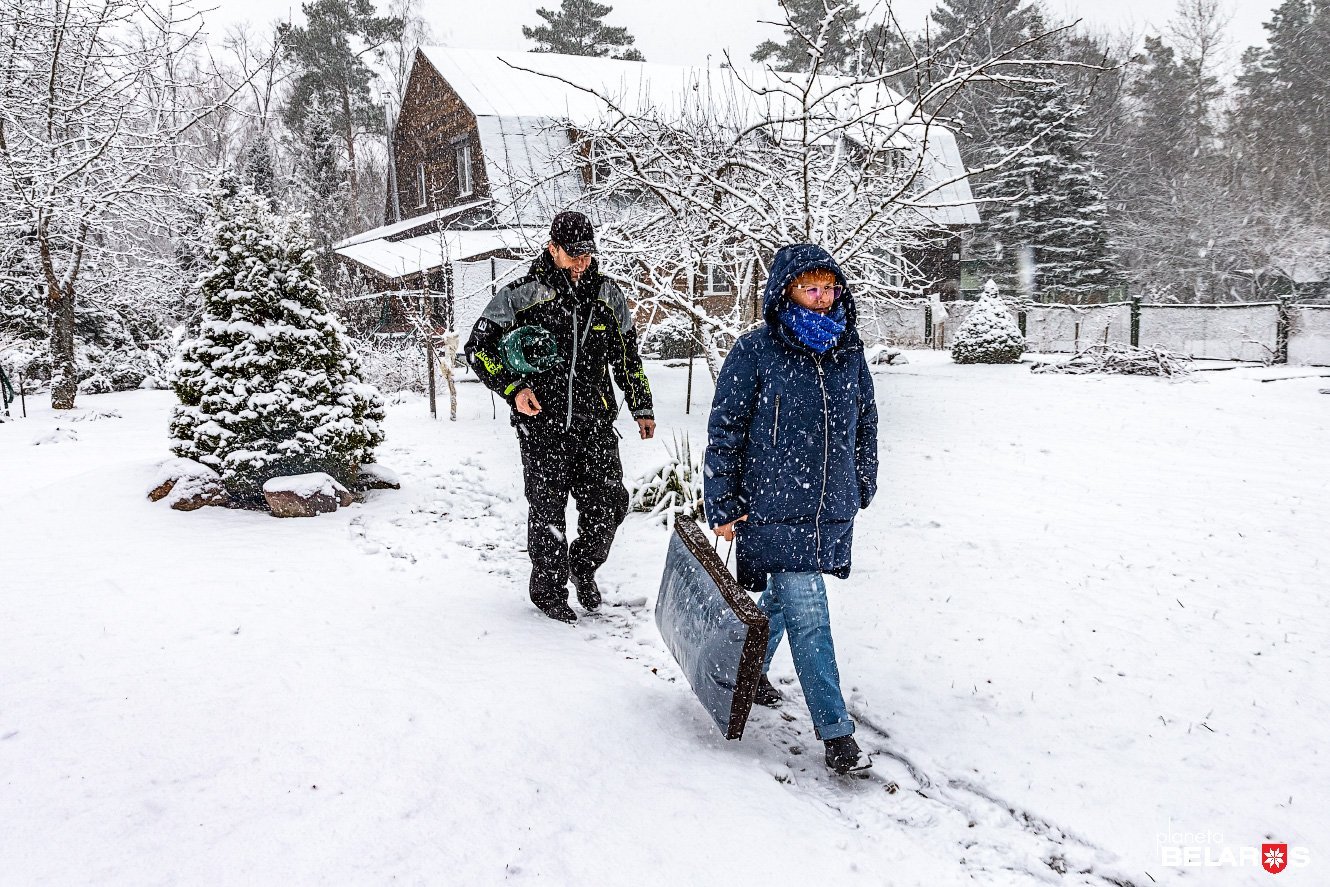 I decided to stop by on the way to our recreational house in the suburbs; I thought to photograph the first flowers under the snow. It didn't work – the snow layer was too thick.

Snow continued to fall all the way to the Berezinsky National Park. We drove and imagined what the Drissa River’s banks would look like from the water, but before the town of Lepel, everything suddenly changed. 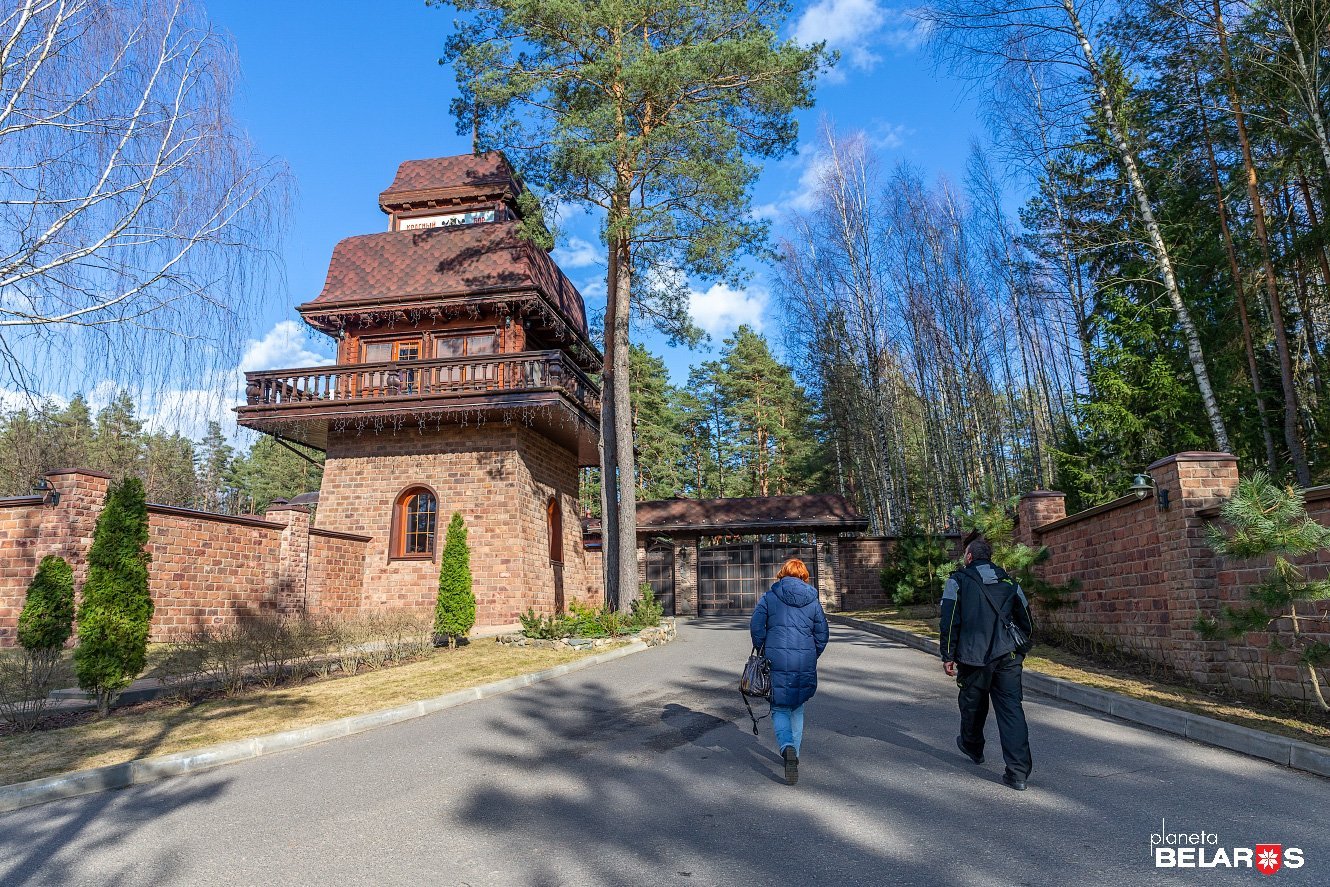 And "Krasny Bor" generally met in the spring-sunny entourage. 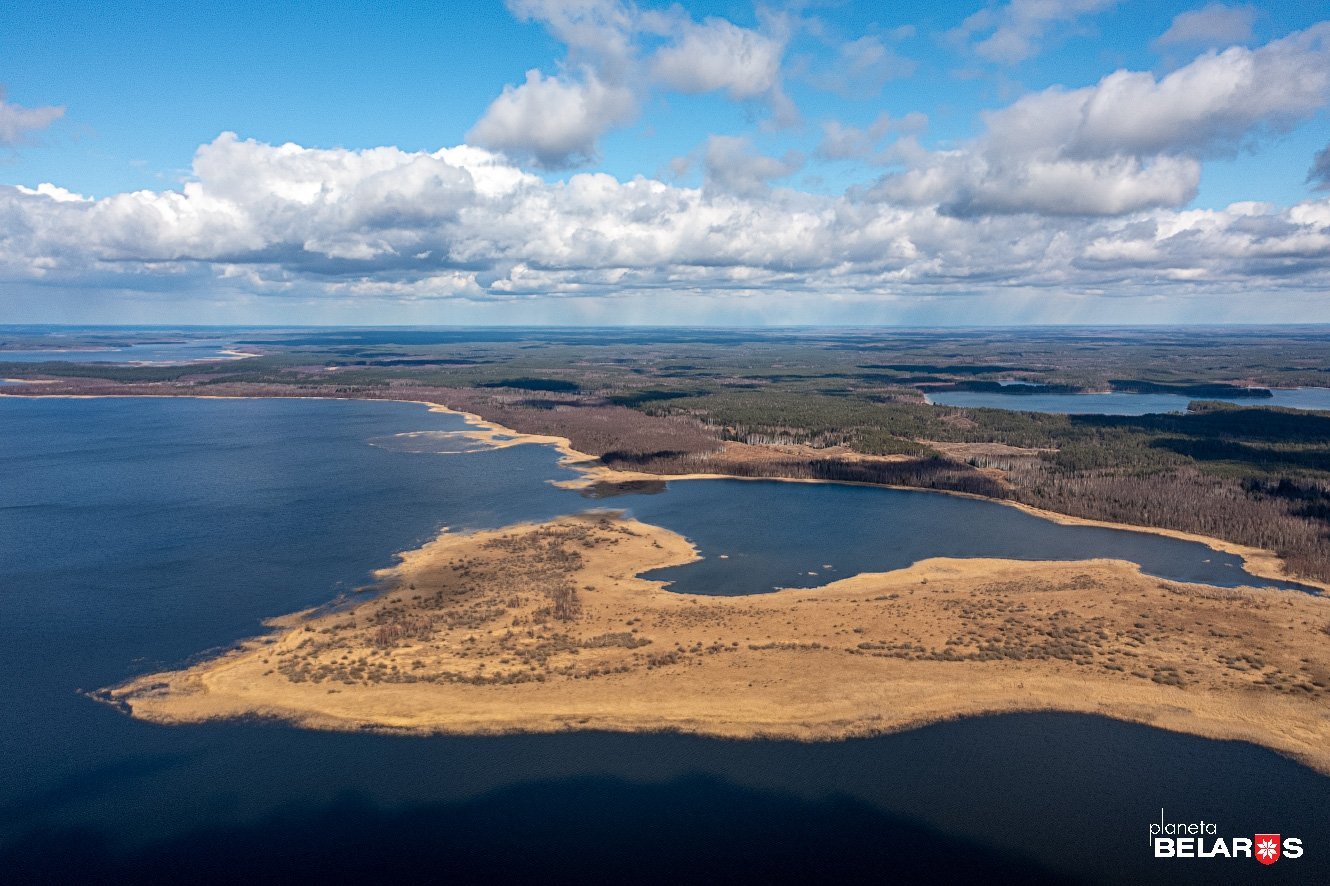 There is no ice left on Lisno Lake. 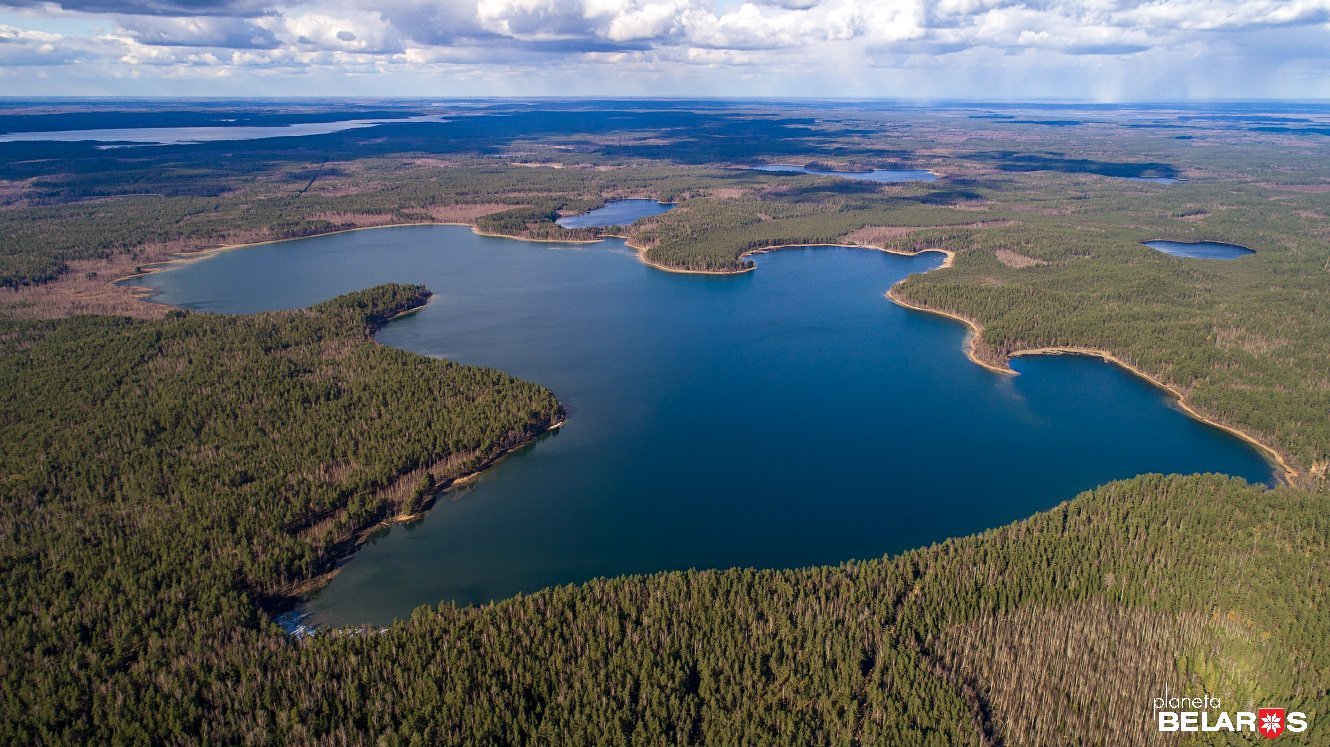 Beloe-Yukhovskoe Lake also turned out to be without ice. My planned frames were getting impossible, but that wasn’t a reason to give up. 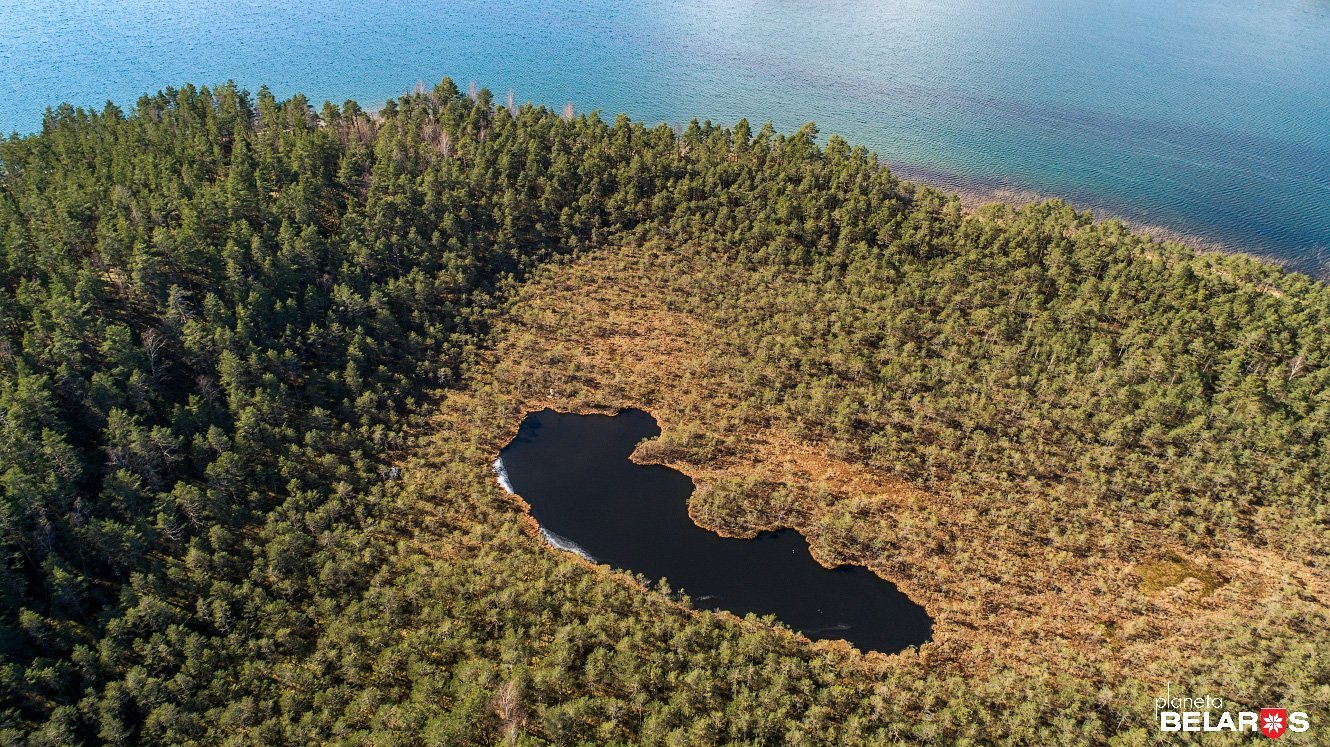 Near Bely-Yukhovskoe Lake I pictured a small lake that looked like an embryo. The next time if  there is a fog or a game of yellow birches and pines, I will try come up with some ideas of new photos. 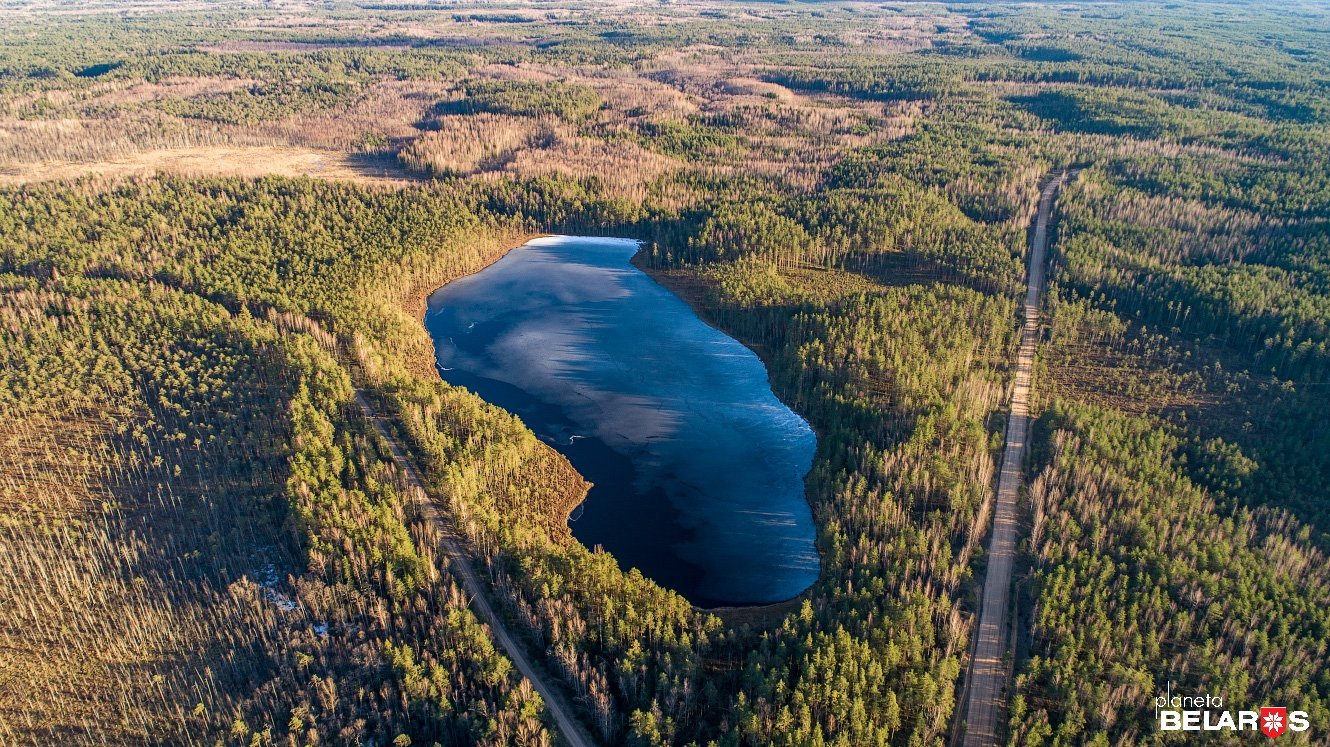 In the evening, we rush to the capercaillie lek. We pass by Aksenov Lake, there are still remnants of ice on it.

Cyril is for the first time in the “Krasny Bor” (a part of the “Paozyorie” sanctuary), he is simply amazed by its beauty, he looks around admiringly, notes the hills, the swamps, the moss unusual for the central part of Belarus. I only think about the possibility of photographing capercaillies. When you do this many, many times, you constantly want to improve your result.

I take Cyril to a tent on a hill – there is a better view from it. Me myself choose to hide in an ambush on the swamp: it is more likely to make effective shots there, if the female capercaillie come. I understand perfectly well that it is unrealistic to achieve serious success on the lek without serious preparation. You should either be very lucky, or you need to know exactly where the center of the lekking area is. And you also need to get to the peak of the mating ritual, when the birds are most active.

We spend the night in the forest. Even in the evening, I realize that I was wrong: the capercaillies did not sit next to me, yet they were able to react to the behavior of females, so there were some minimal chances.

Alas, in the morning I was convinced that nothing good was going to happen to me that day. But again – this is not a reason to be upset. I rather had to be happy for my friend Cyril, who was the first time in his life seeing a capercaillie on a lek and hearing how the females clucked invitingly.

Isn't that enough before starting a water trip?

However, there are eighty kilometers of bad roads between the two reserves. But we had already covered three hundred miles, so that distance wasn’t a problem either.

In the village of Zaborye, an employee of the Sinsha nature reserve, Vasily Nikolaevich Vlasenko was waiting for us. He suggested how to organize a water trip in a better way, but he refused to float with us: it was too cold. 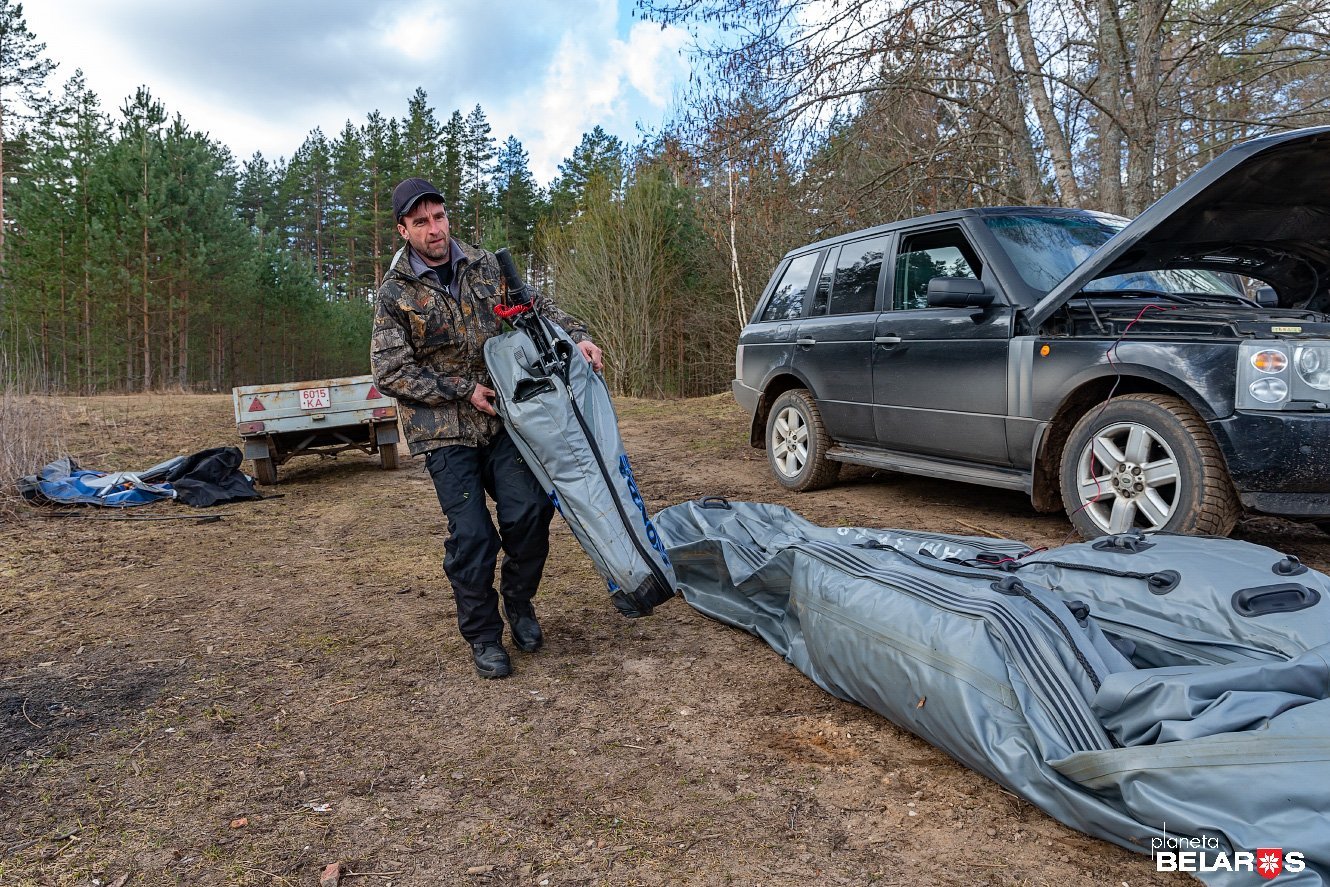 And we have no choice: from April 10 a ban on the use of boats on the rivers and lakes of the Vitebsk region starts. Today is the last day you can go out on the water without breaking the law. 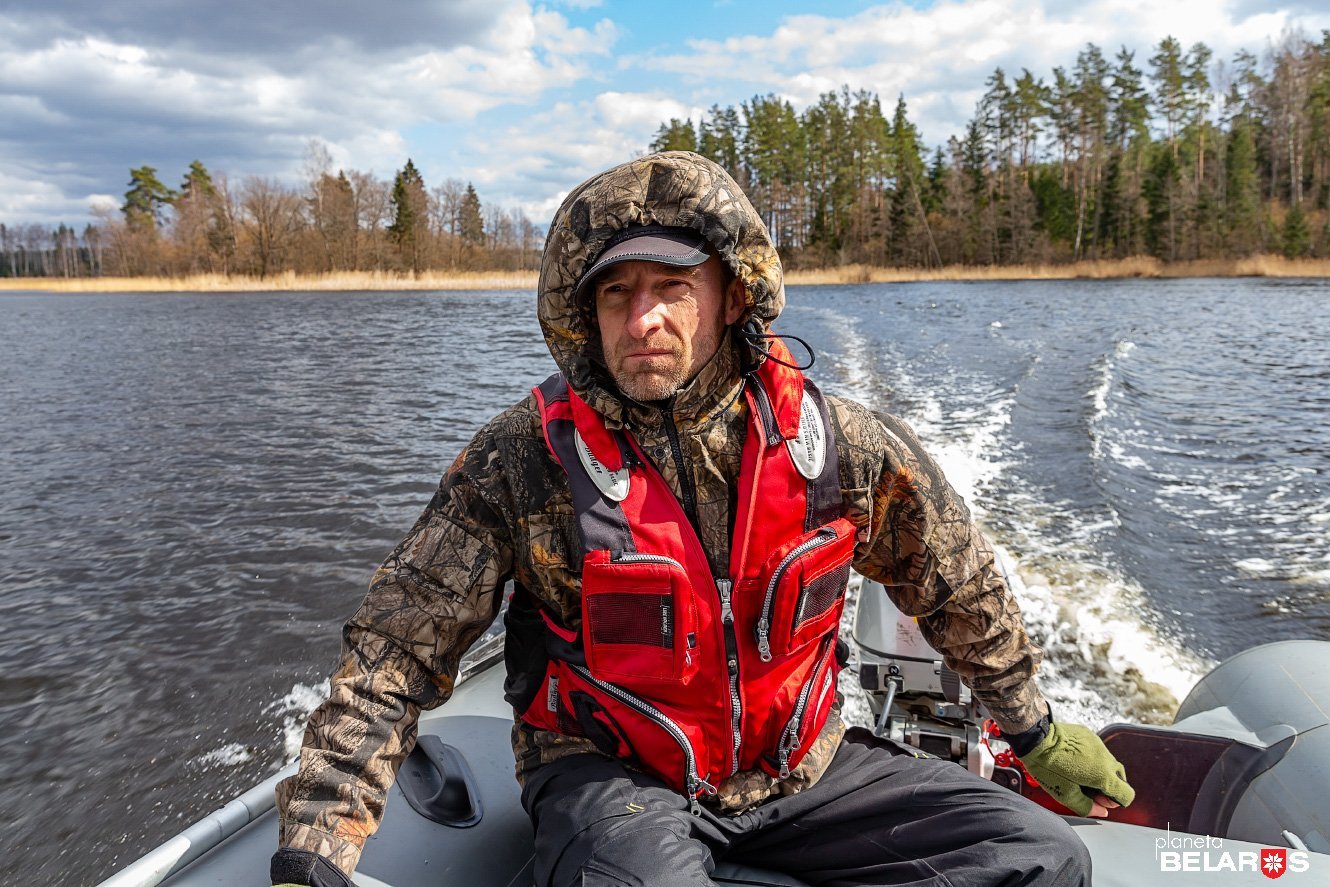 That's what we do. But it is really very cold on the water while the boat is moving. 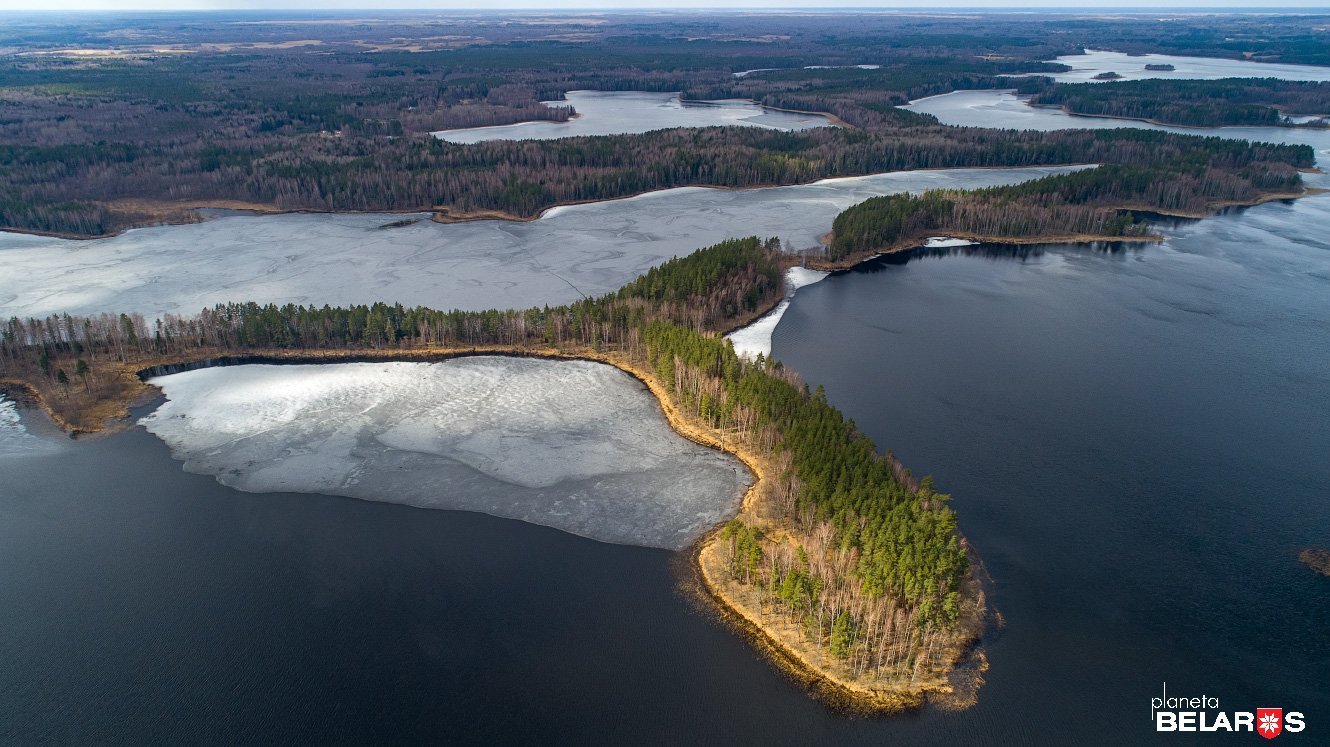 But there is an opportunity to make the planned shots!

It is the longest peninsula in Belarus. It is located on Sinsha Lake. 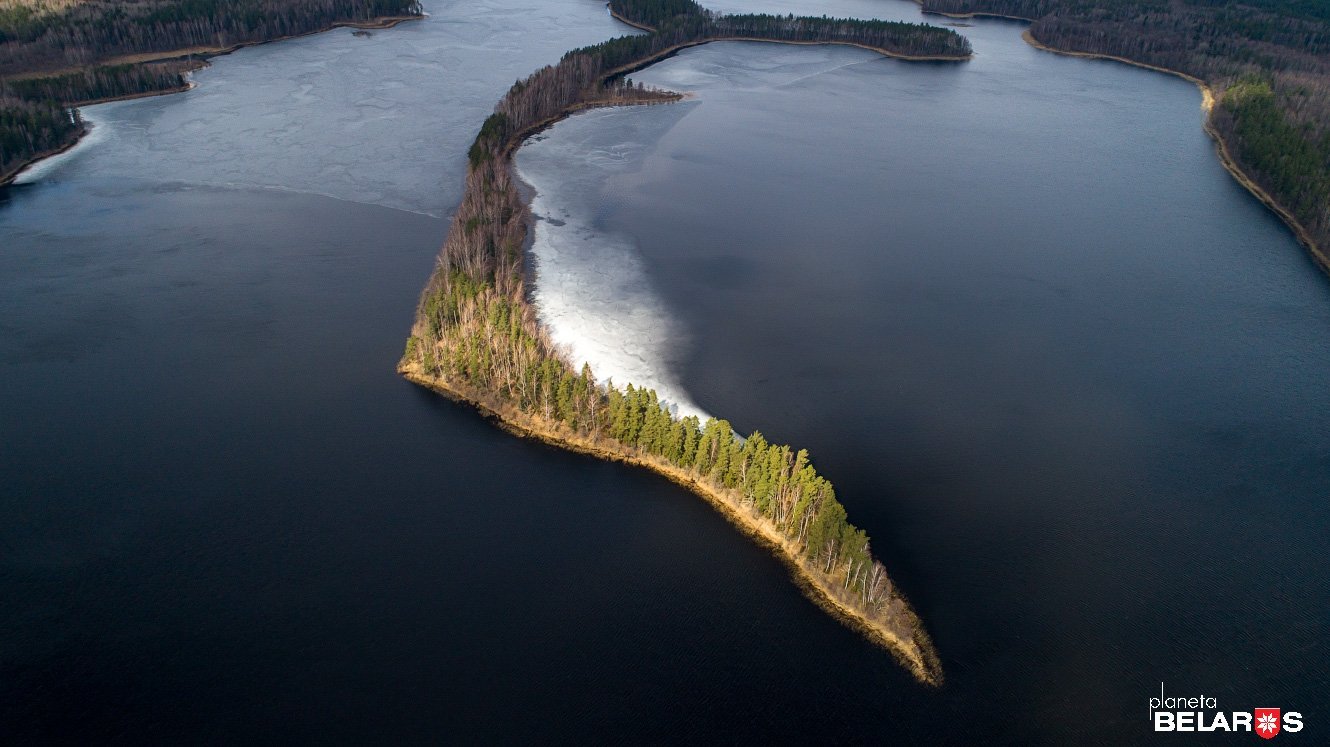 To my great regret, the weather begins to get worse, the sky is covered with clouds, an icy north wind blows, I have to catch the beams of sunlight. 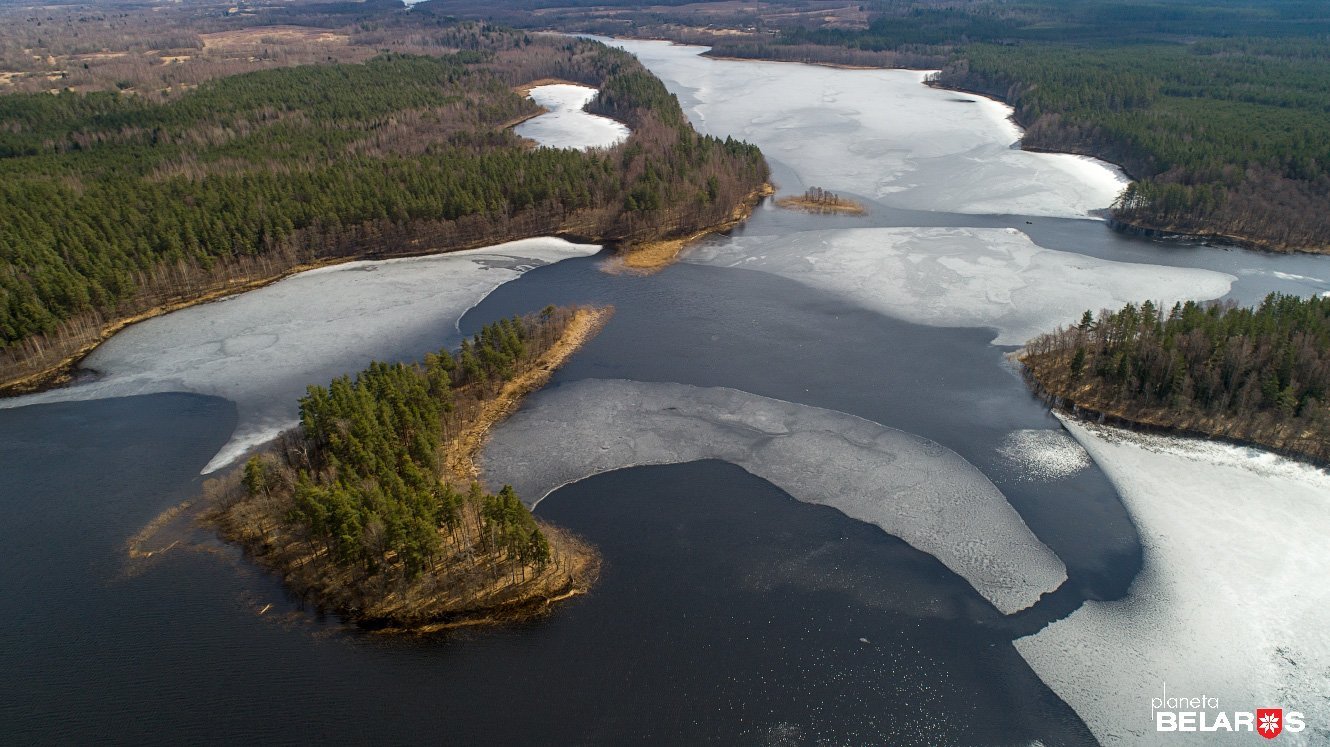 But what is most important is that the lakes are covered with ice! I have the opportunity to record the beginning of spring. 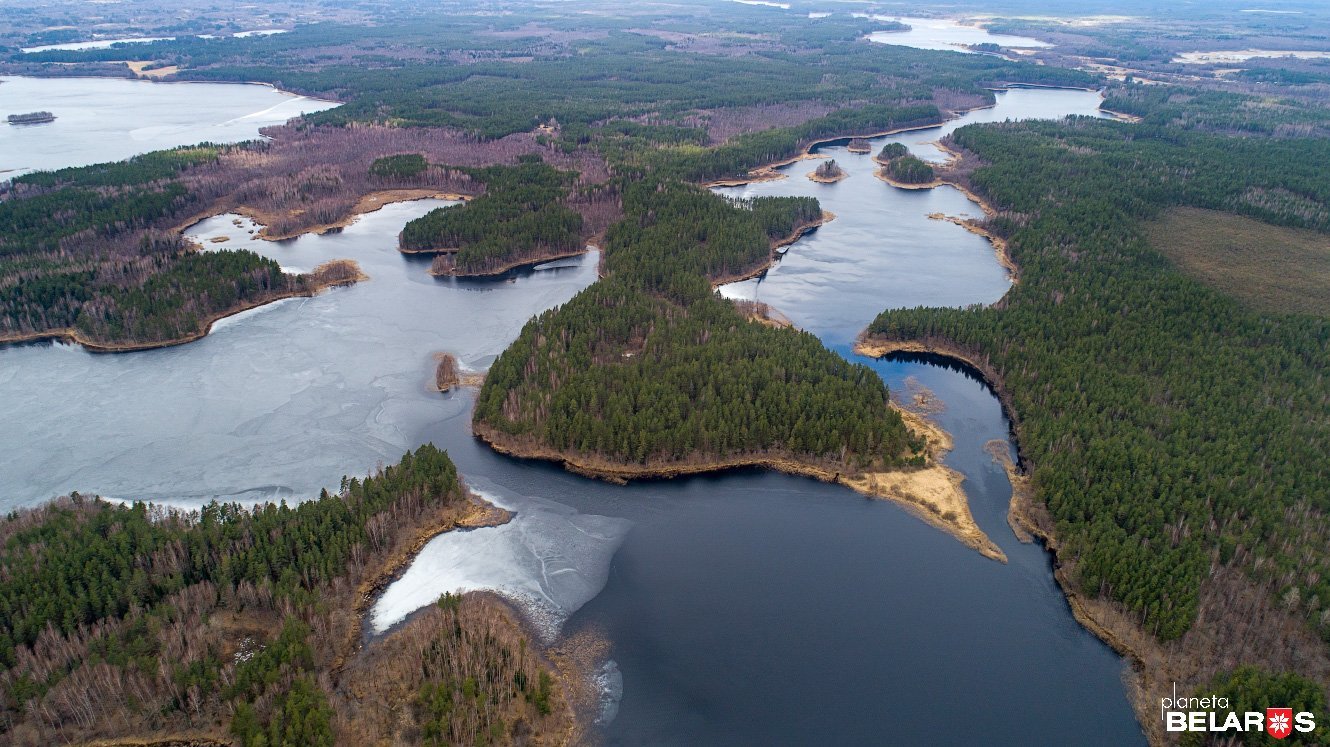 Drissa doesn't look like a river at all in this area. 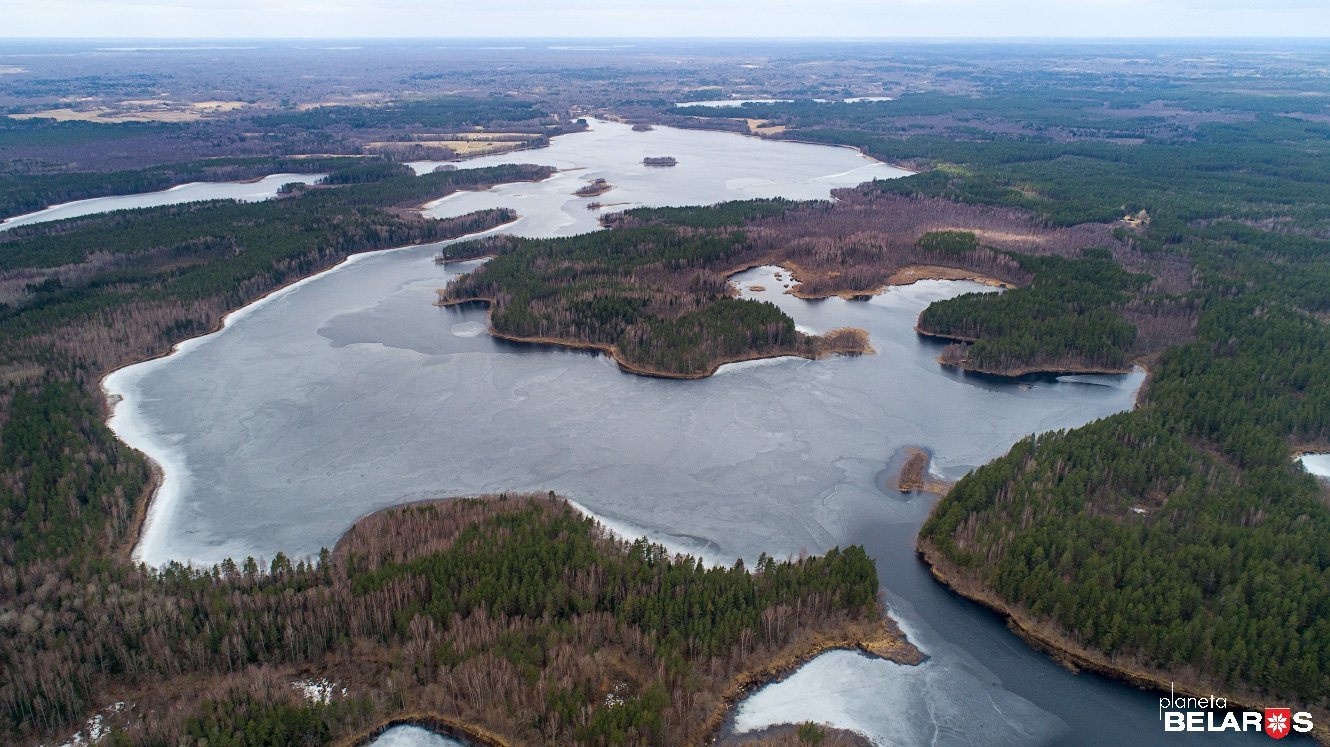 Voloba Lake appears in all its glory. 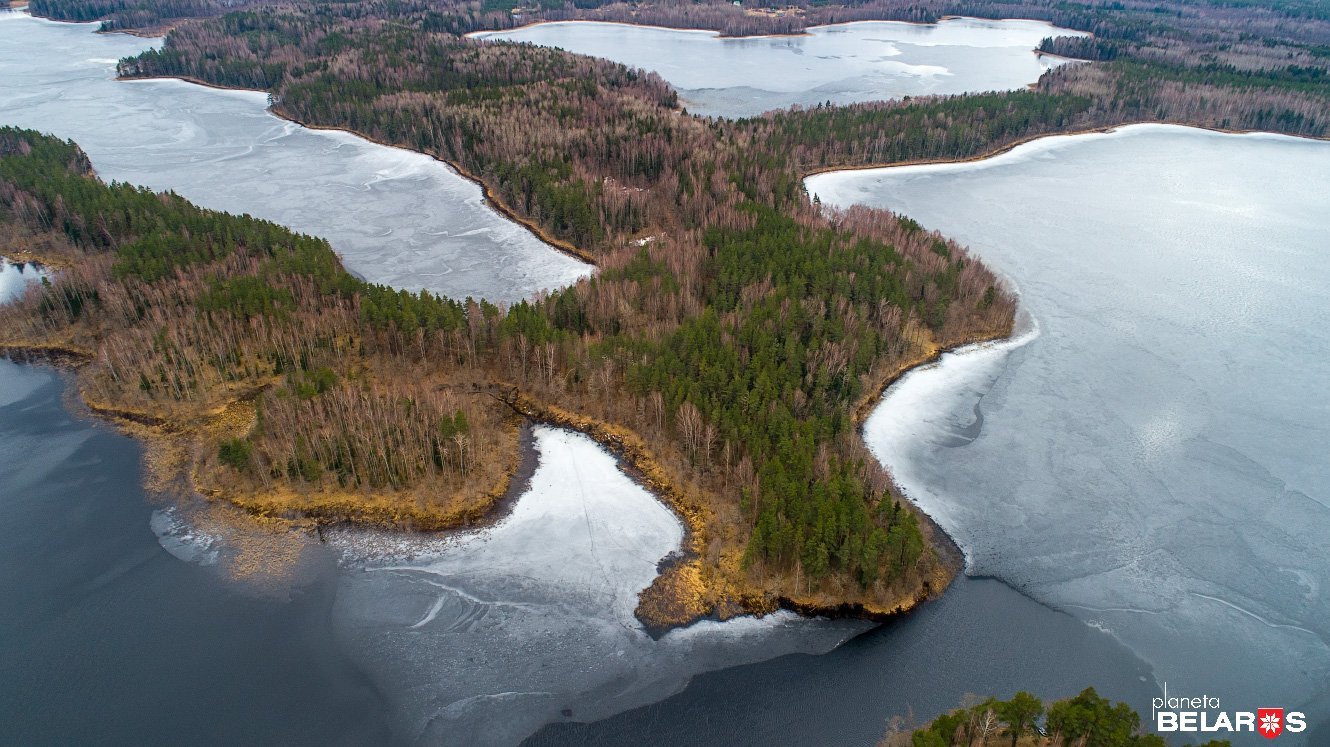 If you want, you can find some images. For example, here I see a tired knight falling face down on the ground…

We return to the village of Perevoz, go upstream to the lake Drysy. 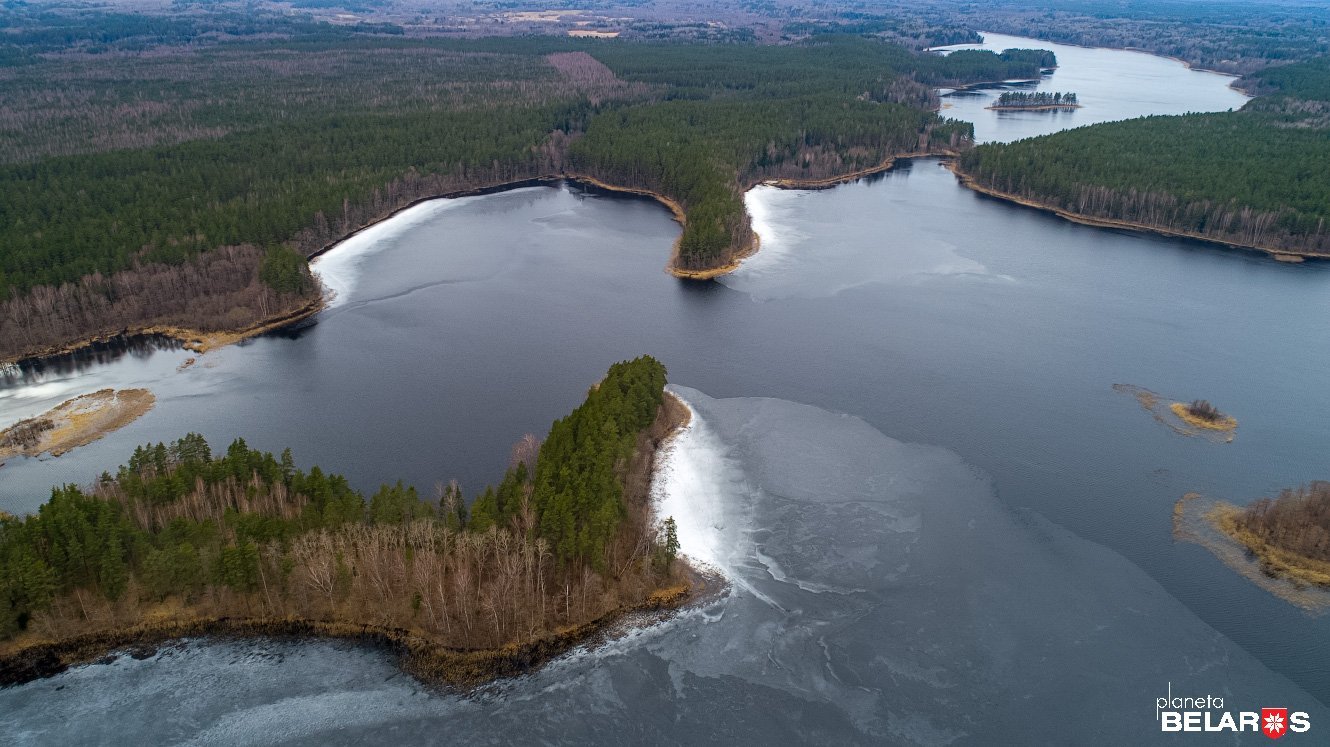 Alas, it is still impossible to go through it by boat: we haven’t got icebreaking equipment! 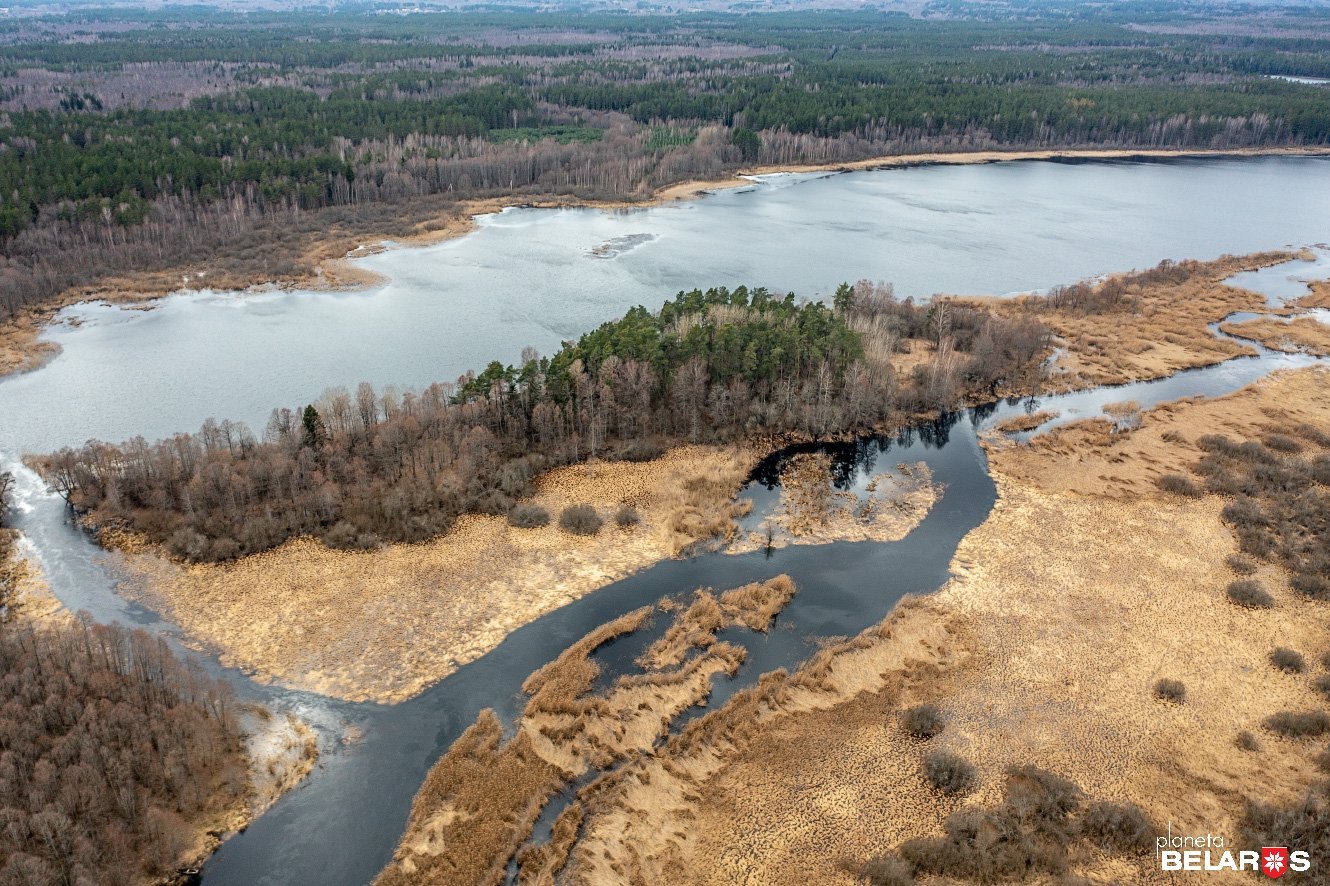 But we have the opportunity to photograph the mound of Rogneda. 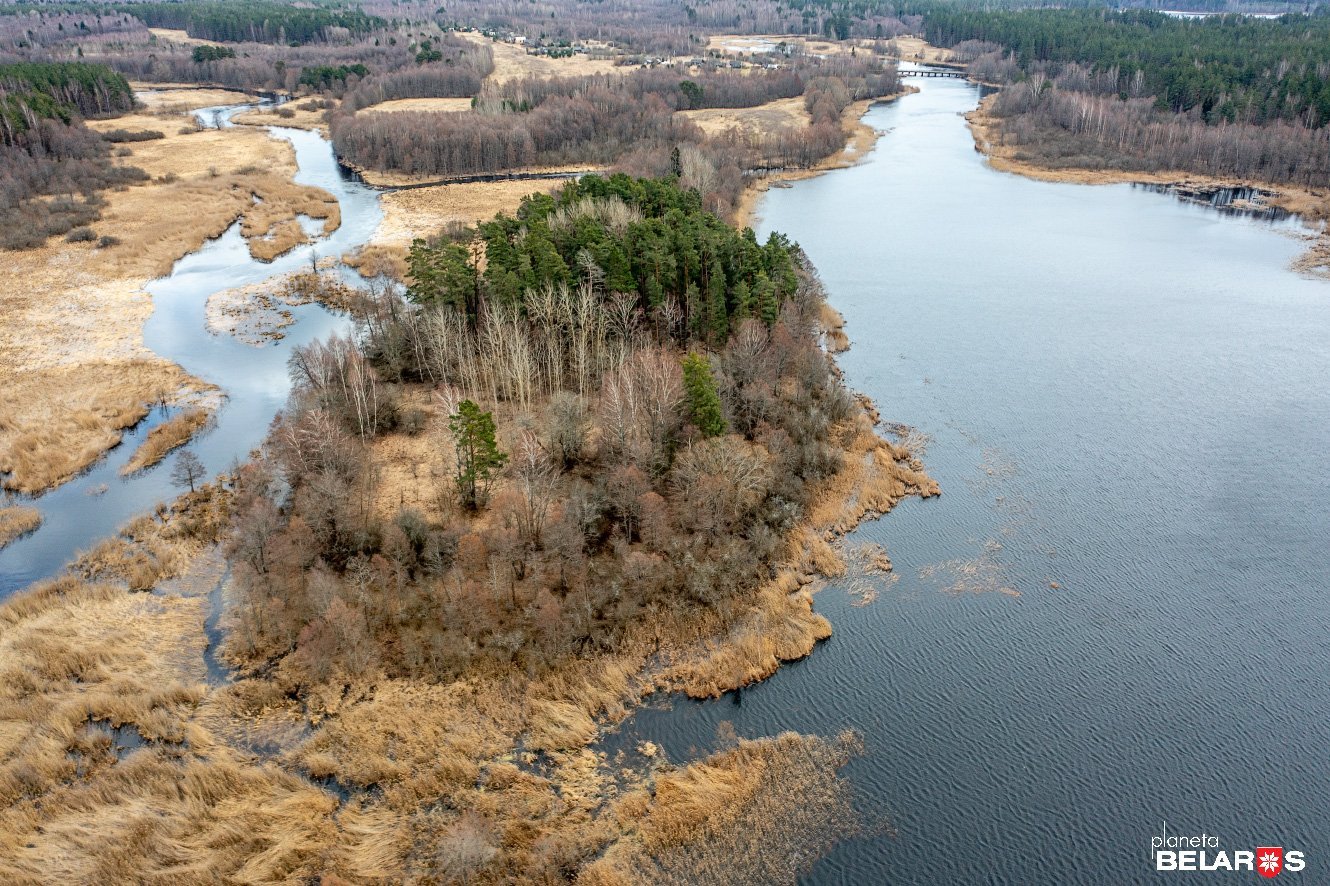 It is located at the confluence of the Russian river Usha with the Drissa.

By this time the sky is getting completely cloudy, but we have completed the minimum part of our plan. We need to go back to “Krasny Bor”. There we will have another night on the capercaillie lek.

Each of us has one more chance to see something unusual. 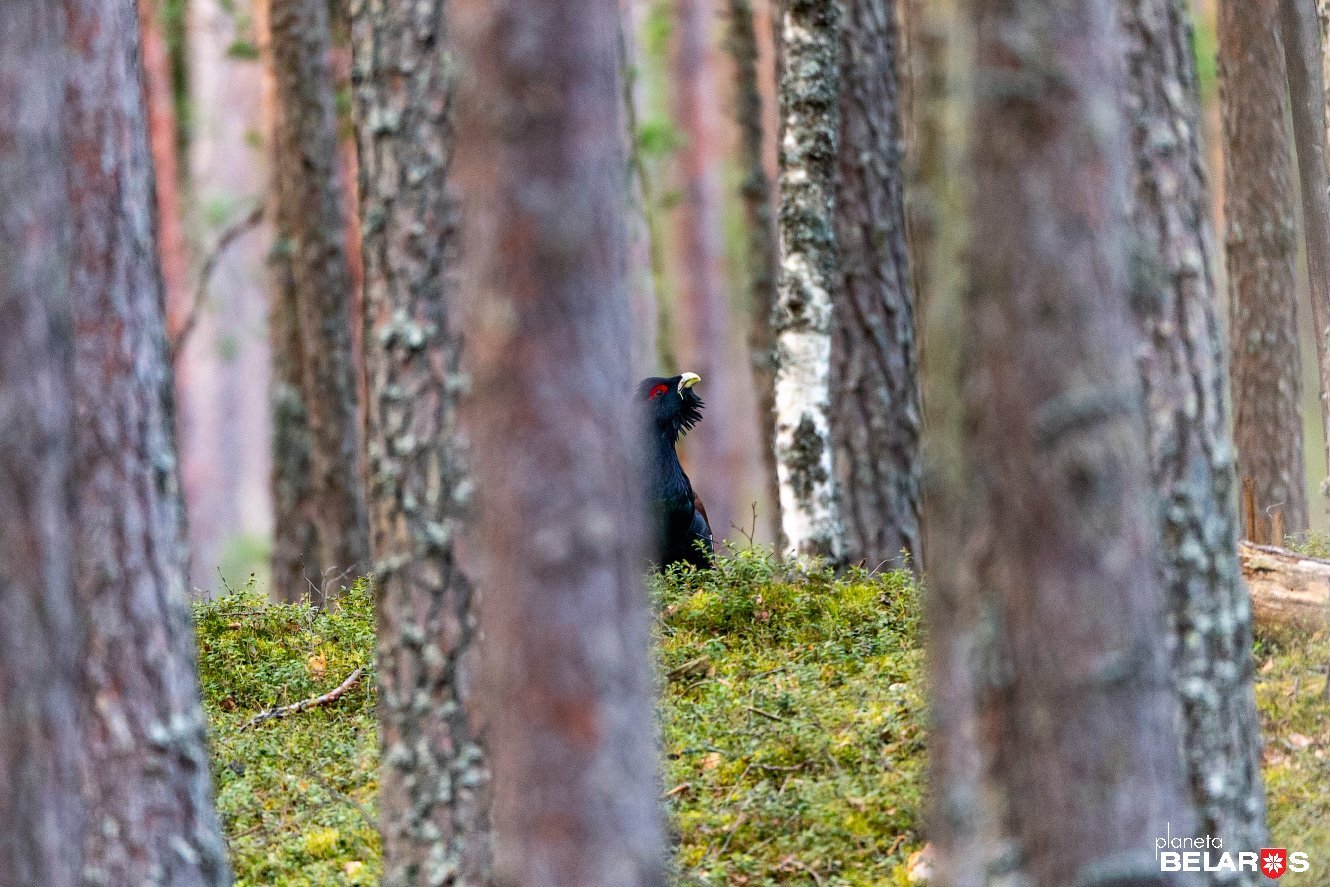 Alas, the morning is not happy. It’s too windy. Capercaillie practically do not lek when it’s so windy. Of course, they can go down to the ground, walk around their lekking section, but most likely there will be no fights and other exiting moments. 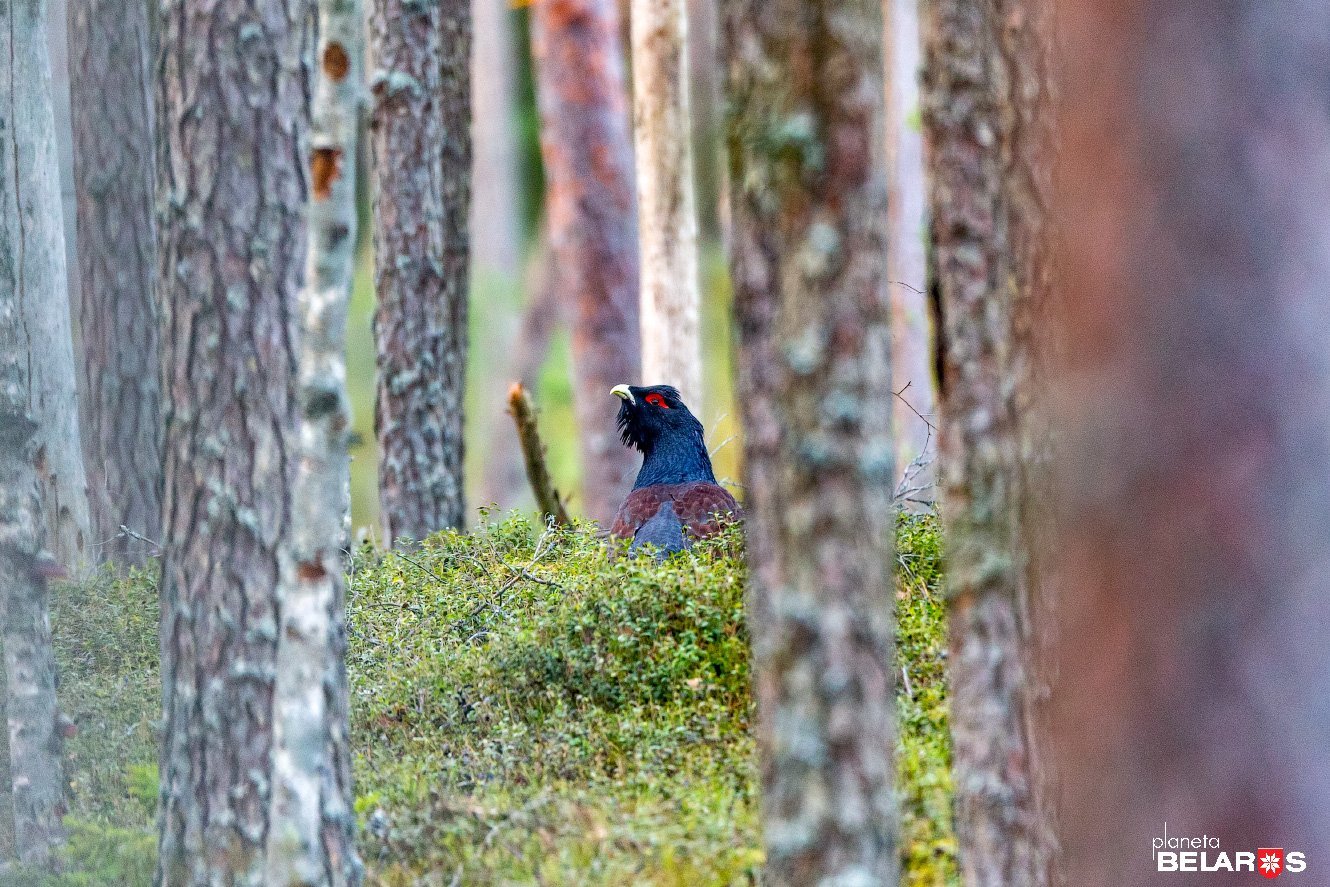 And so it happens. The nearest capercaillie was about a hundred meters away. And only a good lens allowed us to make these shots. But again – this is not a reason for frustration. The situation can be assessed from a completely different point of view. I was recalling the words of my Lithuanian friend, a wildlife photographer Kestutis Cepenas, who annually came to “Krasny Bor” for the capercaillie mating season. He said: "If I don't visit “Krasny Bor” in April, then the summer season hasn't started for me."

We've been there. And we also stopped at a unique plantation of the Pasque Flower (Anemone patens). 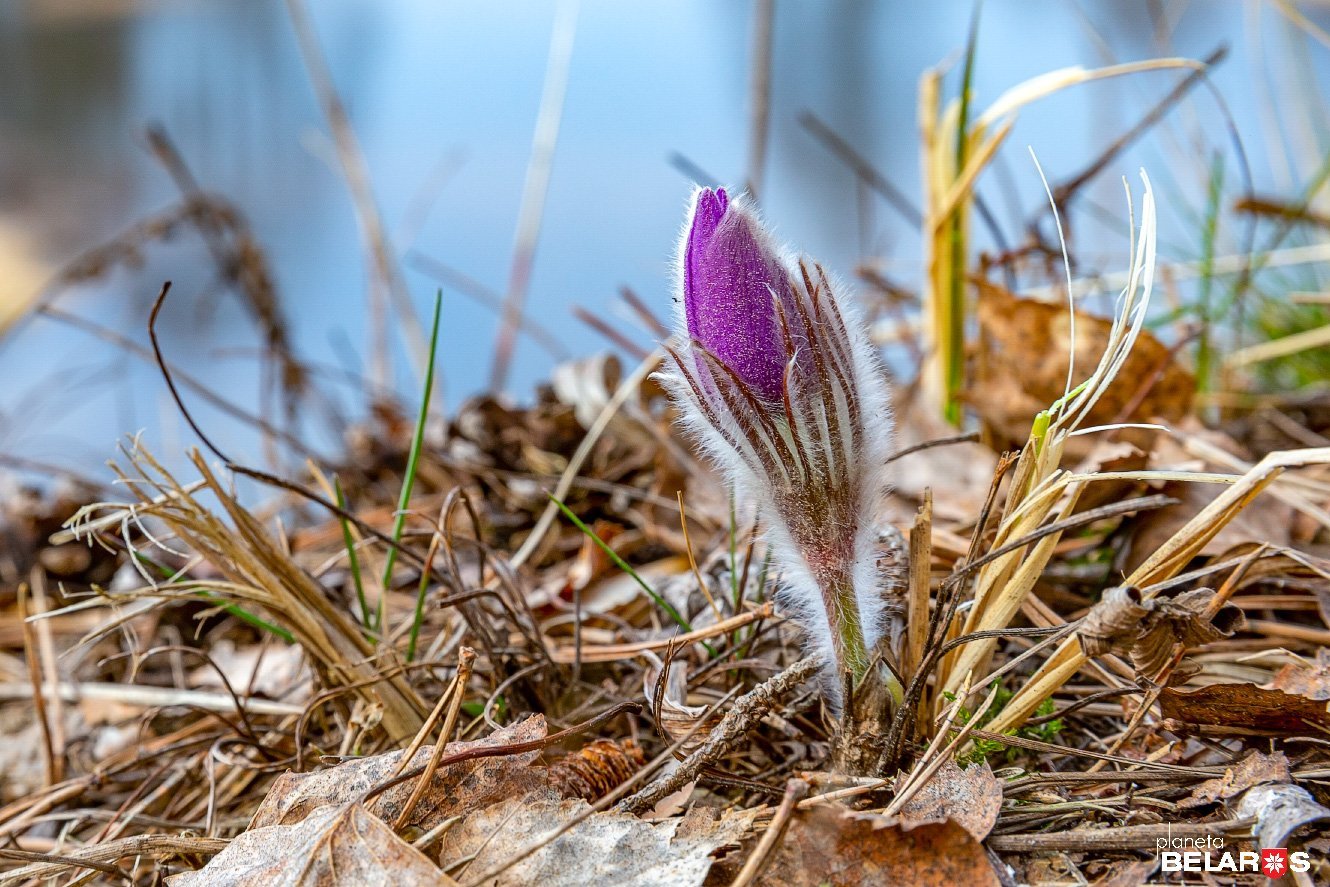 Only in “Krasny Bor” these flowers can be photographed against the background of water and the rising sun! Because they grow on the high bank of the Svolna River. However, even here, not everything turned out perfectly: the flowers of the Pasque Flower were still in their buds. But does that change the point?!

We plunged into the real wild nature! We received a boost of energy that will allow us to overcome any possible difficulties.