A few years ago a passion for wildlife photography made two Belarusian beauties to become friends. These ladies are so different at first glance: Irena Gudievskaya is impulsive, affective, and emotional; while Svetlana Karpeychik is dreamy, soft, and sympathetic. 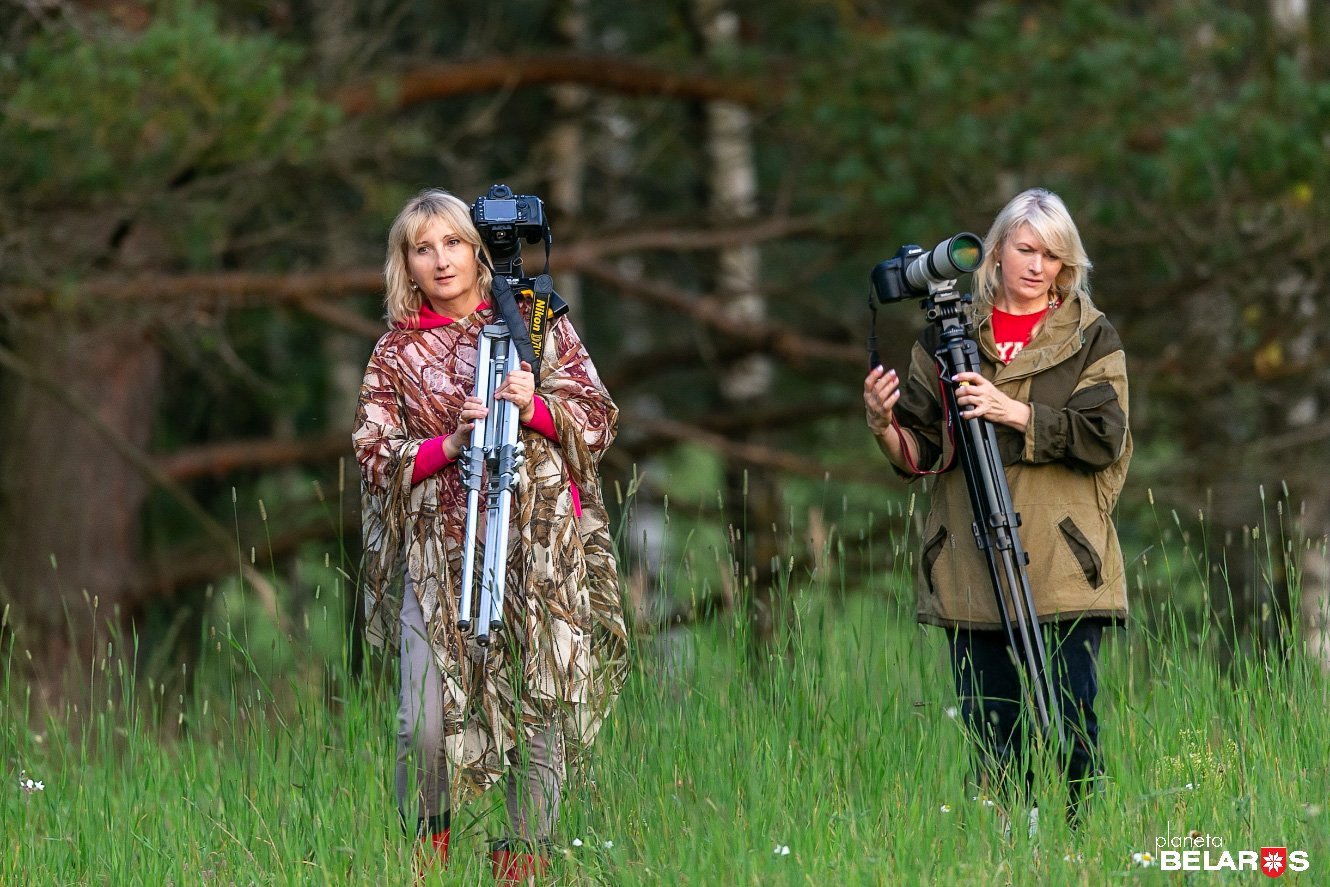 One day friends offered to Sveta a photo session at Irena's for her birthday: and she received not only a portrait from the photography expert as a gift, but also a sincere female friendship.

And ... quite unexpectedly she became interested in wildlife photography.


You may ask what it means… It means to wake up at the crack of dawn, go hike for long distances, to pass through swamps with a heavy load, to climb trees, to "feed mosquitoes", and to sit in camouflage tents without moving waiting for the object of the picture.

The girls went to Krasny Bor for a very specific purpose. Let's find out what happened in the end. 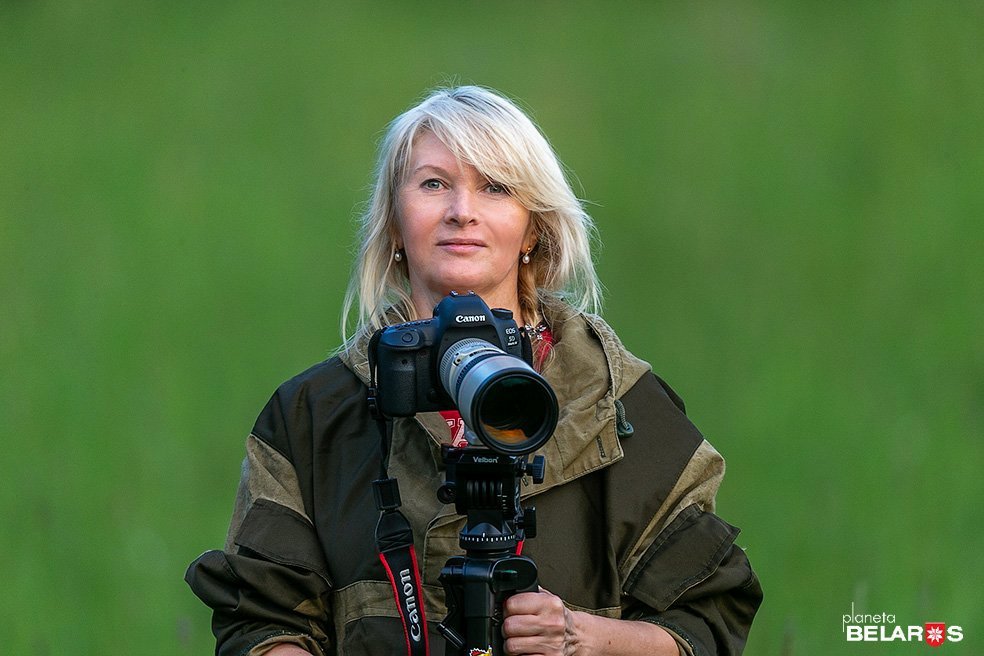 - We visit Krasny Bor for the rutting "roaring" deer for the second fall in a row, and this is becoming a good tradition for us. Once you've been here, you'll be attracted by Krasny Bor again and again! You’ll eager to see graceful animals, to feel unity with nature, to feel the taste of excitement.

This is a unique place where everything is harmonious, peaceful, inspired!

Animals here are at rest, but, nevertheless, they are very sensitive and wary. The fact that the staag “exposed” himself to us was just our luck! Can you imagine that?! He was grazing in a clearing and didn't even think to run away from us. Of course, according to the theory, we knew that the deer is a very cautious animal, which can run away from any rustle; to get scared by the slightest crackle of a twig. Before that the herd scattered immediately as soon as the car stopped.

But in this case, there was a completely neutral reaction. The stag saw us, but paid no attention at everything. He didn't run away! 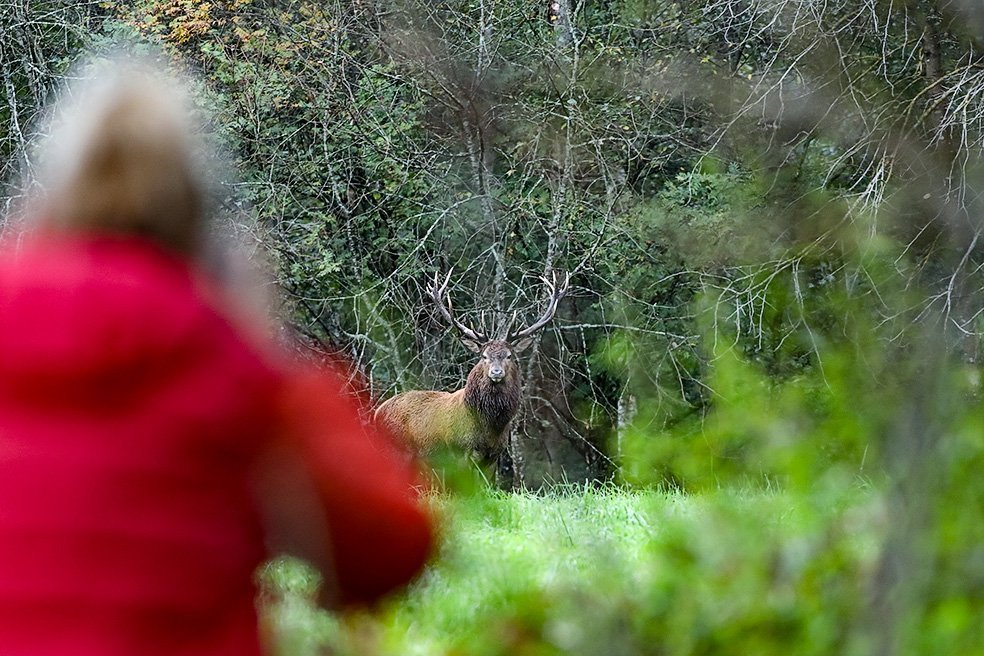 At first, we started getting closer, taking shots. The deer was grazing quietly, turning one side and then the other, and roaring from time to time… It looked like he was posing for us! Then he began to retreat into the woods. We followed him in small dashes. When he stopped, we lowered our tripods and took shots, and then it was all over again. It was like he was playing with us. At the same time, it seemed as he didn't know how to react to us. It was like he was a little angry, but he definitely didn't see us as a danger to himself. He looked at us with bewilderment: "What are you actually doing here, ladies? I have horns! I am the master here."

The stag roared at the camera, digging the ground with his hoof, then with his horns, butting trees. 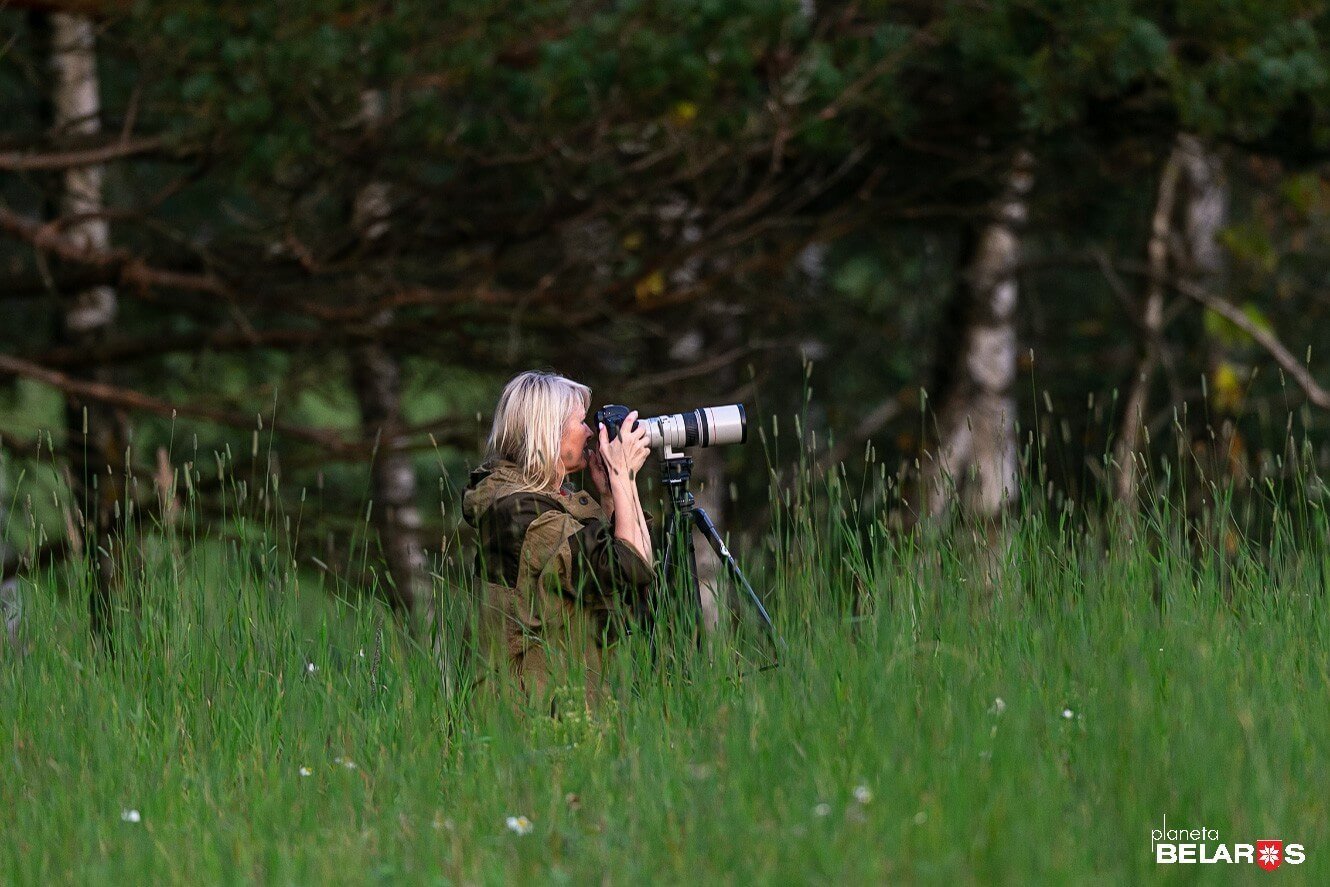 Then he went out on the road and turned around: we had time to make beautiful shots again. Then he approached his herd as if he wanted to demonstrate to us:  "This is all mine." He took off for the woods, and we got a picture of him running. 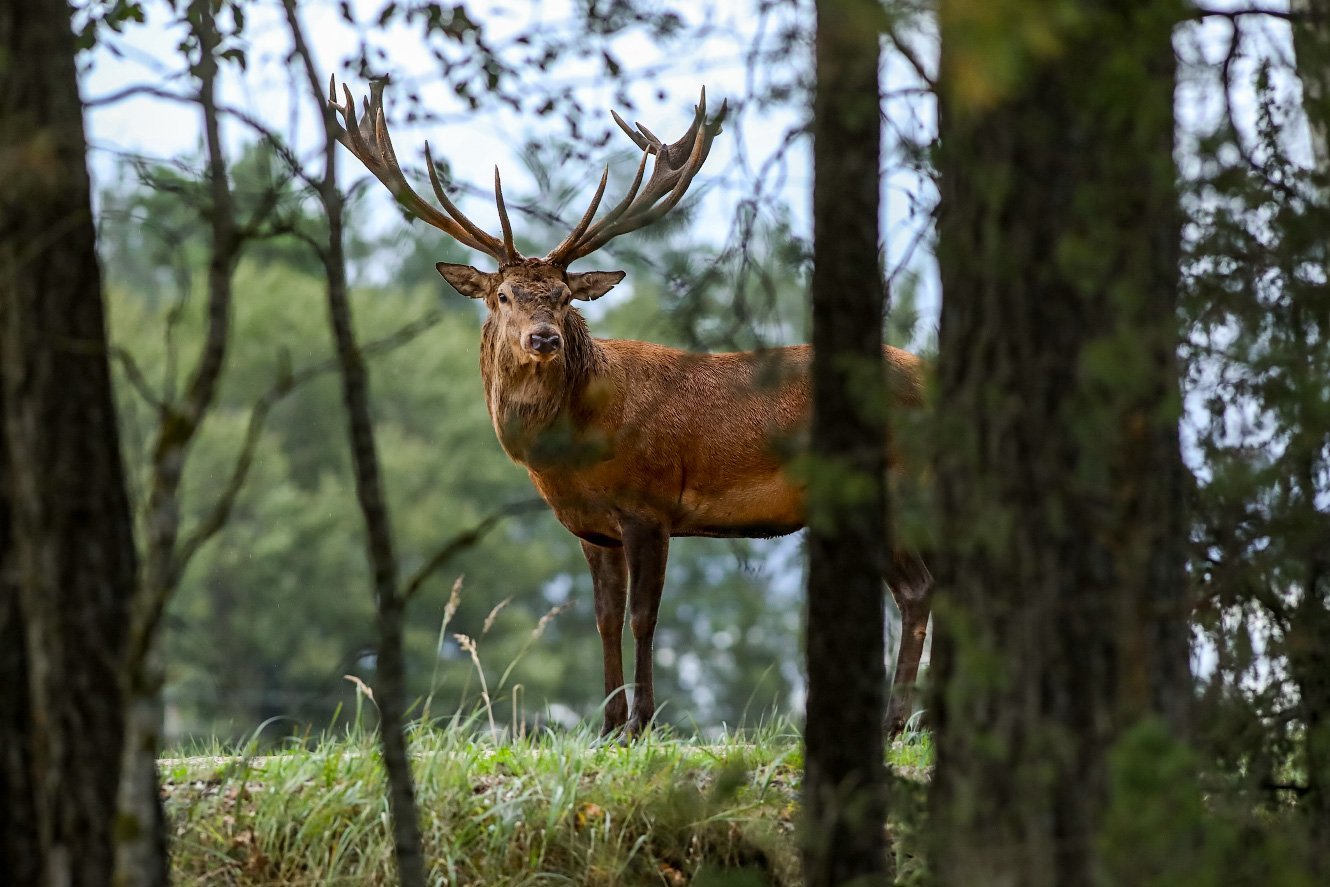 Then he went back to the road, stopped and looked at us: “Well, are you following me or not?!” He drank some water from the puddle, turned around, and stalked off into the woods. We followed slowly. 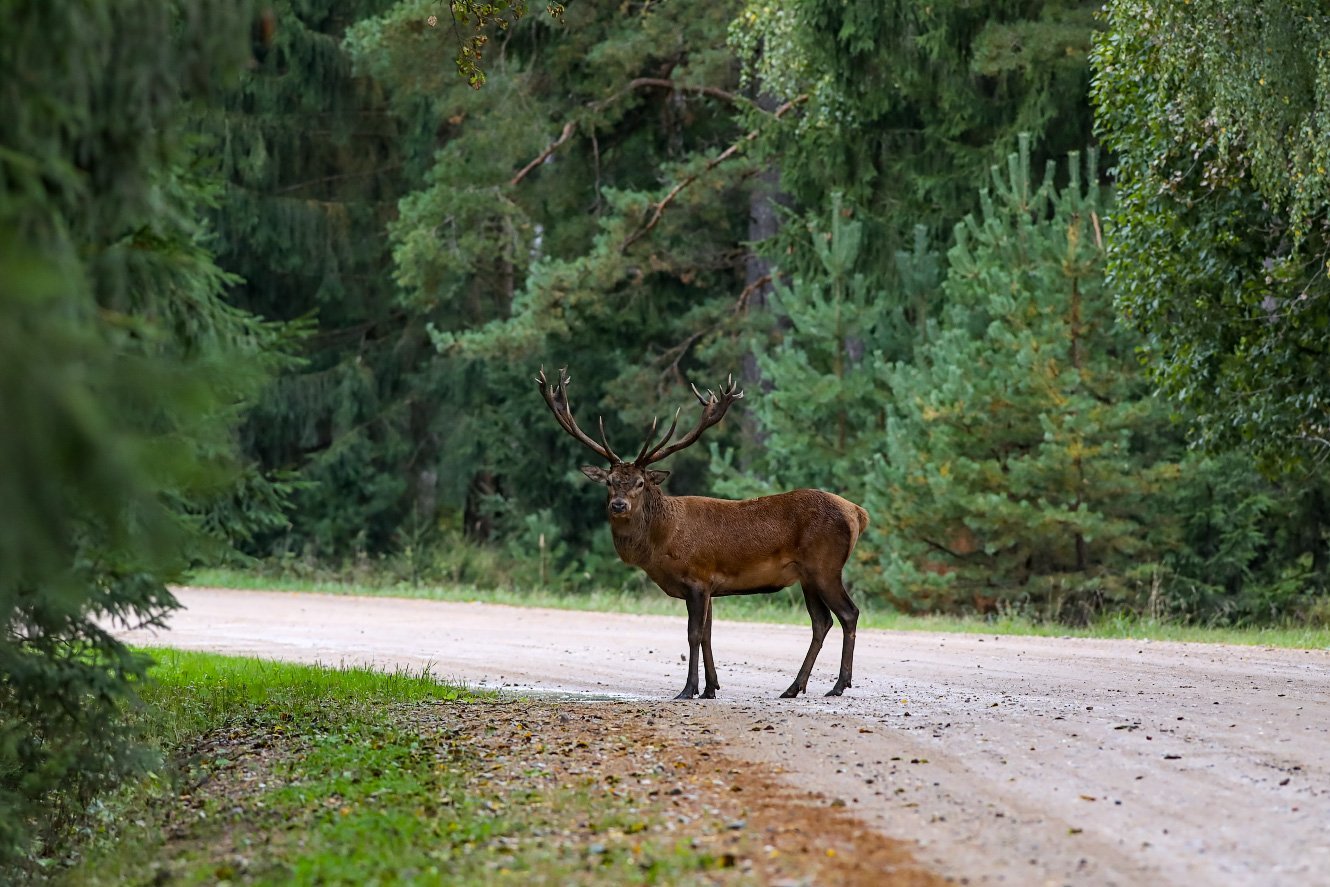 At the forest he checked again to see if we were following him, and in the forest, we also took a few more shots.

It turned out to be a kind of one-actor theater. Just an unbelievable show. Even if I hadn't shot it on camera, it would have made a lasting impression on me. It was a wonderfully close contact with such a beautiful and powerful animal! I lived through these minutes and got wonderful shots – and only then I started to realize the uniqueness of the situation. 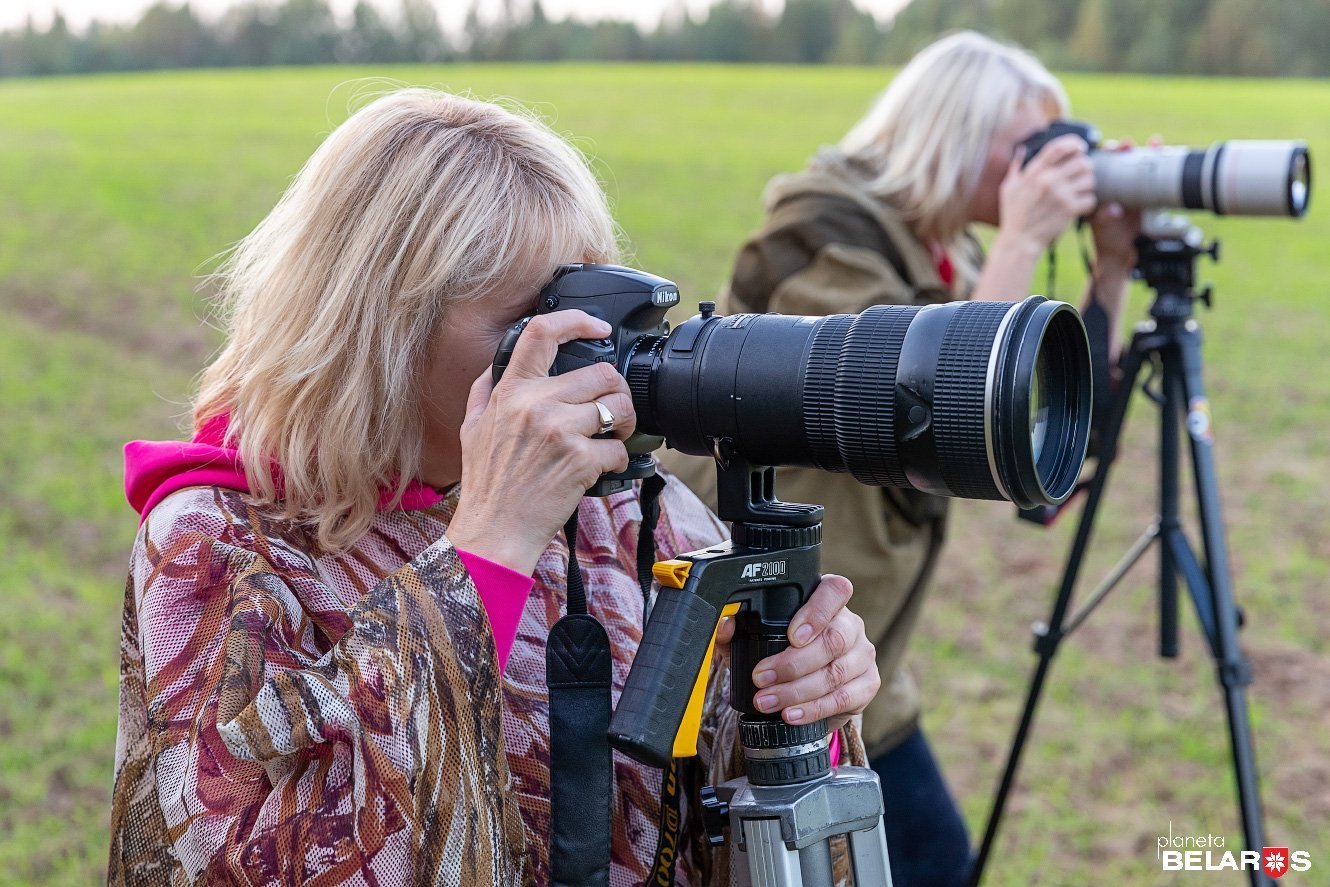 Being alone I might had been afraid to "chase" the stag, but together we did it bravely. Moreover, the huntsman Igor Bashkirov was watching us from the car chuckling! Irena and I were not afraid, we were euphoric. 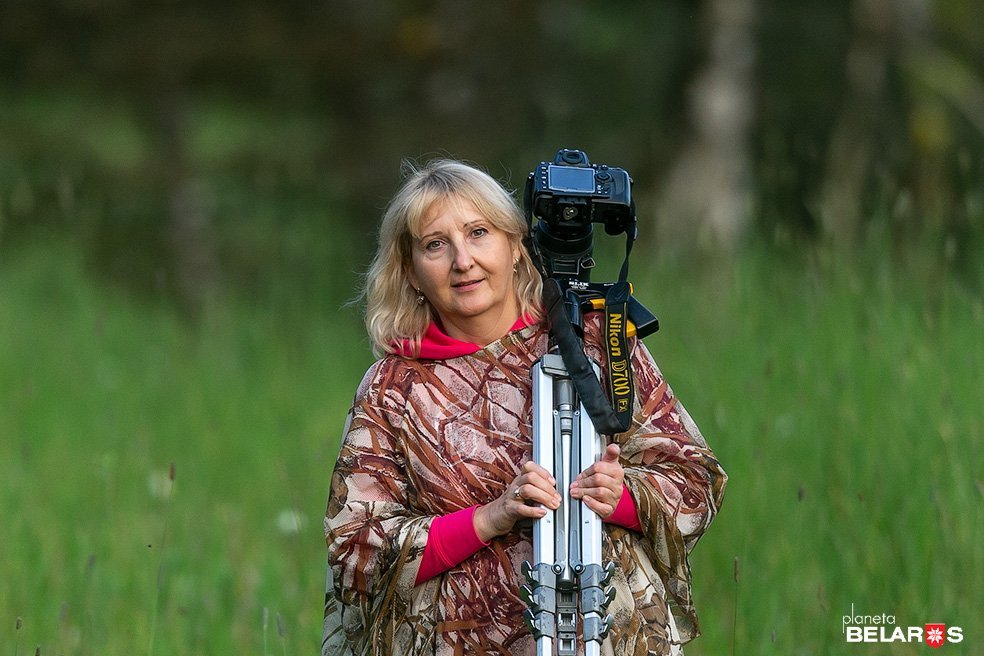 The photographer Irena Gudievskaya dreamed of getting into the "Krasny Bor" since last year championship in photo hunting. As Vladimir Karchevsky, the Director of the hunting area, puts it, Krasny Bor is a place where dreams come true!

– That’s true, I agree with him, - says Irena. – I discovered this unique area, because previously I only used to know the Belovezhskaya and Nalibokskaya forests, as well as Polesie. Without belittling their merits, I must say that from now on "Krasny Bor" for me is very special due to the unreal beauty of its forests and stunning lakes.

But the most important thing here is the opportunity to take a safari tour in the wild. This is a place where every photographer should strive to get. 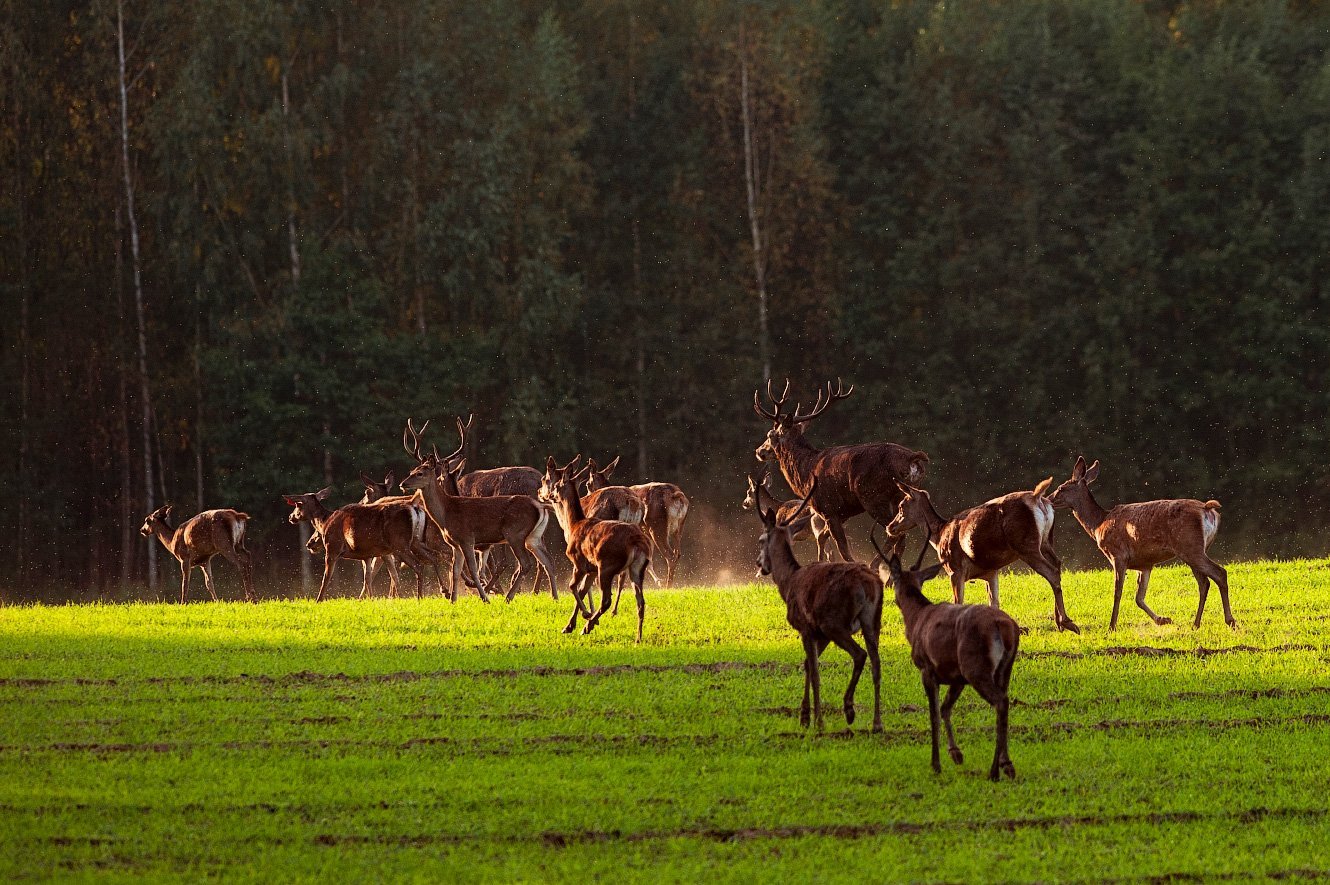 When you hear the roar of a rutting stag, and not just one, but a whole chorus at once; when you see them running through the fields - it's very beautiful and inspiring! 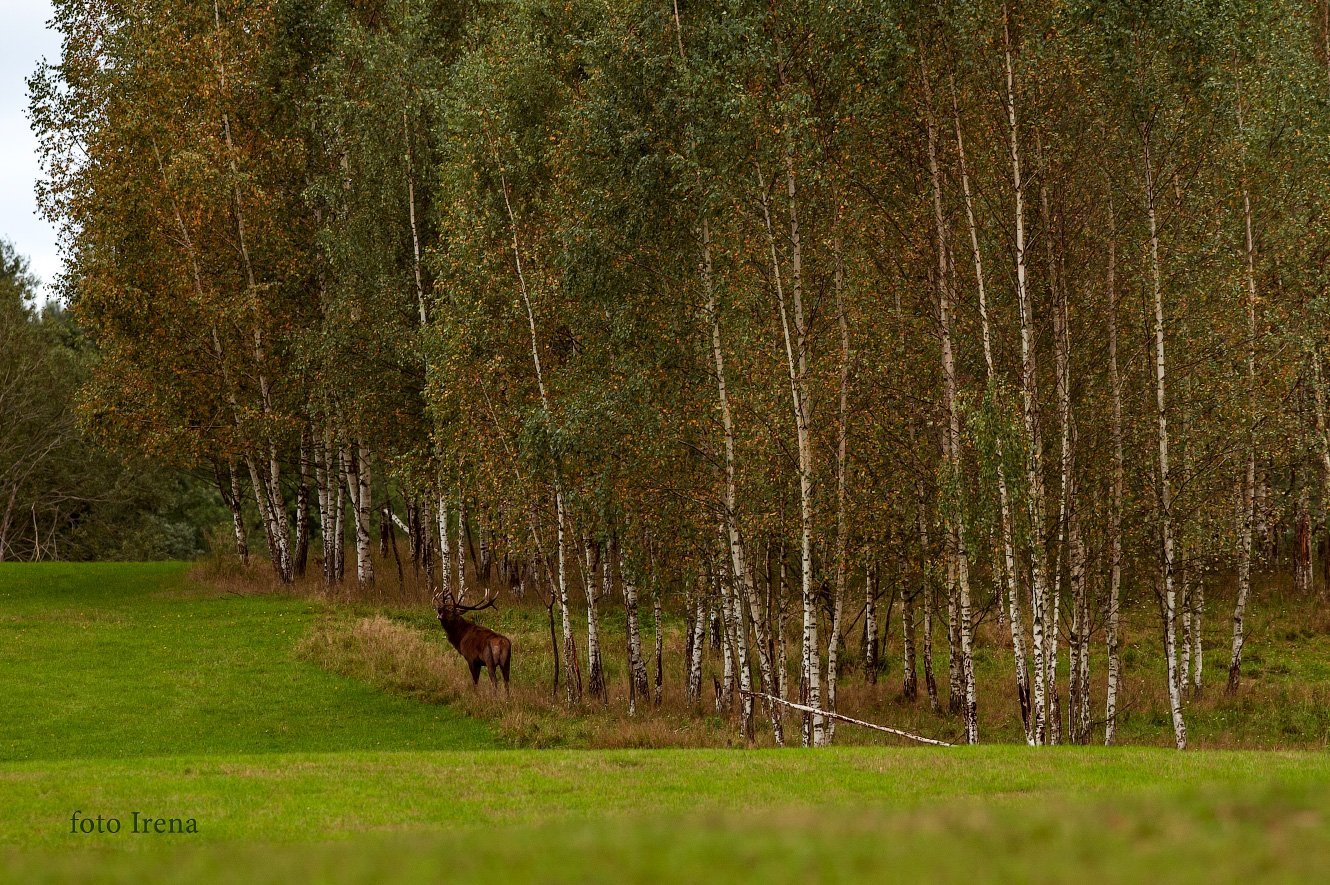 The roar of a stag causes deep feelings by itself: it awakens the spirit of the ancestors, returning you to the basics. It’s a very interesting experience, and it’s quite powerful emotionally.

We were able not only to see and to hear everything, but also to film it. I can say that I made a shot of my dream. It's not a roaring stag, because I’ve already had one. And not the moose, which is also in the frame.

This is a deer with a deer, as the bride and groom, mythical-fabulous Adam and Eve of the animal’s kingdom. They were not far from the Apple Tree. There also was a village in the background: everything was as I used to imagine! I had already built this song up in my head and went to Krasny Bor for it! I wanted to see something fabulous… And I saw it.

So, I will be returning here again and again. I want to shoot just forests, landscapes: here is an amazing terrain. The North of Belarus is fantastic! I had no idea there was such a magic place here.

In addition, people who work at Krasny Bor treat their places with such love that their feelings are involuntarily transmitted to customers! Employees of the hunting area are not indifferent to photographers, e.g. Igor Bashkirov, who accompanied us on this trip. Or the huntsman Vasily Ganebny, which was helping us last year during the championship photo hunt. They advise, empathize, and become your partners – this is very important. I think they are also happy to see the photographers here, because after meeting us, the Krasny Bor’s animals are still alive…  And the Director of the hunting area of "Krasny Bor" Vladimir Karchevsky also loves his work deeply.

There is an exceptional service here, including a wonderful cuisine, which is unusual and non-standard!

And what else was pleasantly surprising is that the historical memory is alive here! It is manifested in the monuments of the villages burnt during the WW II and in many other details. It is touching and very emotional when a properly standing monument suddenly appears in the middle of the forest. I admire the people who have done it! 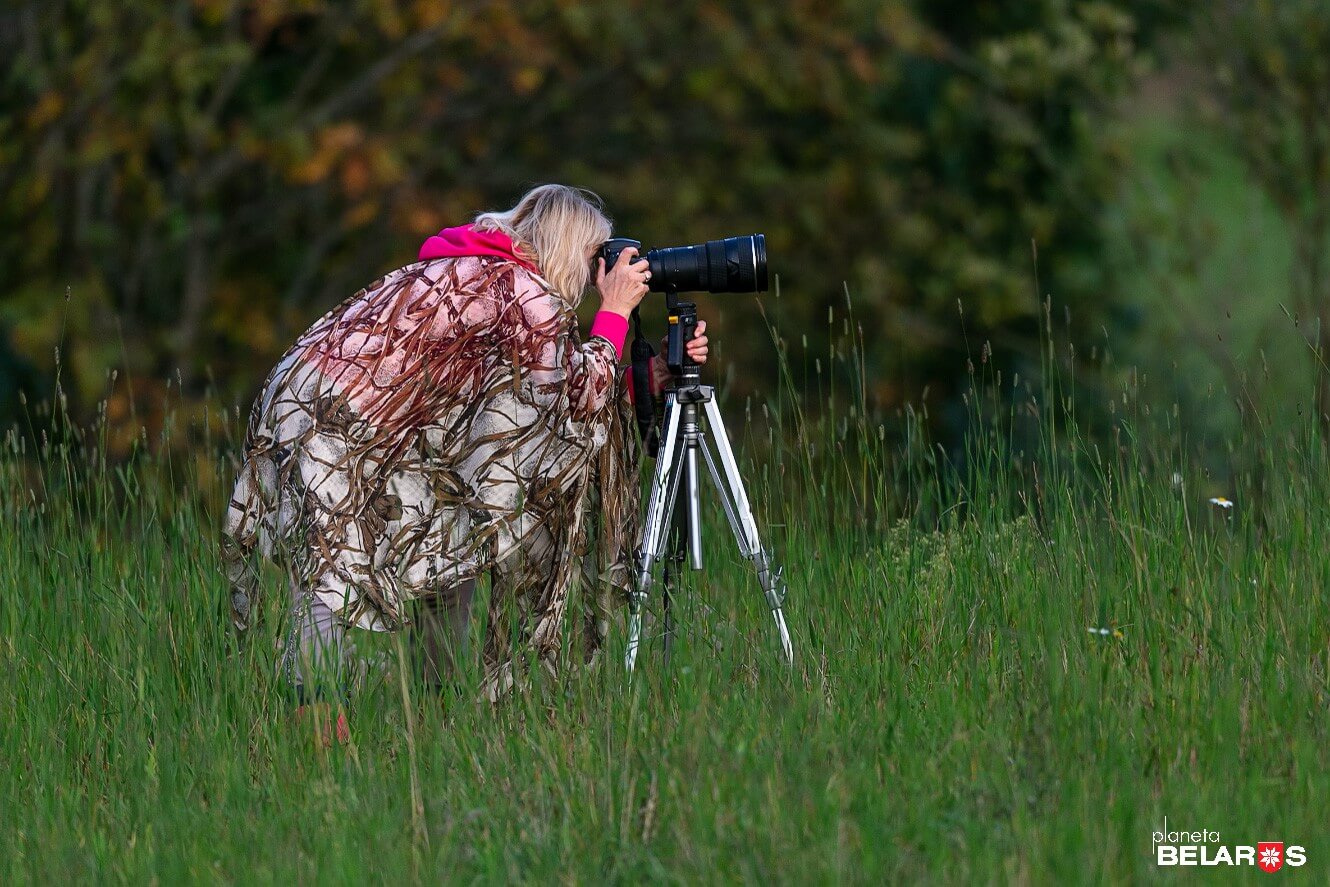 It is important for future generations to preserve this nature and its inhabitants.