Disasters happen not only to people. Sometimes, animals also find themselves in extreme situations.

Last Saturday, in the Miora district we participated in a seminar on promoting the tourism in this region. At noon, my friend Oleg Selyakh called me and told that beavers were sitting on a hut destroyed by a night storm on the Drivyaty Lake opposite the Braslav bus station. And it looks like there were beaver cubs there…

There were still two hours left before my presentation, so I decided to go to Braslav. 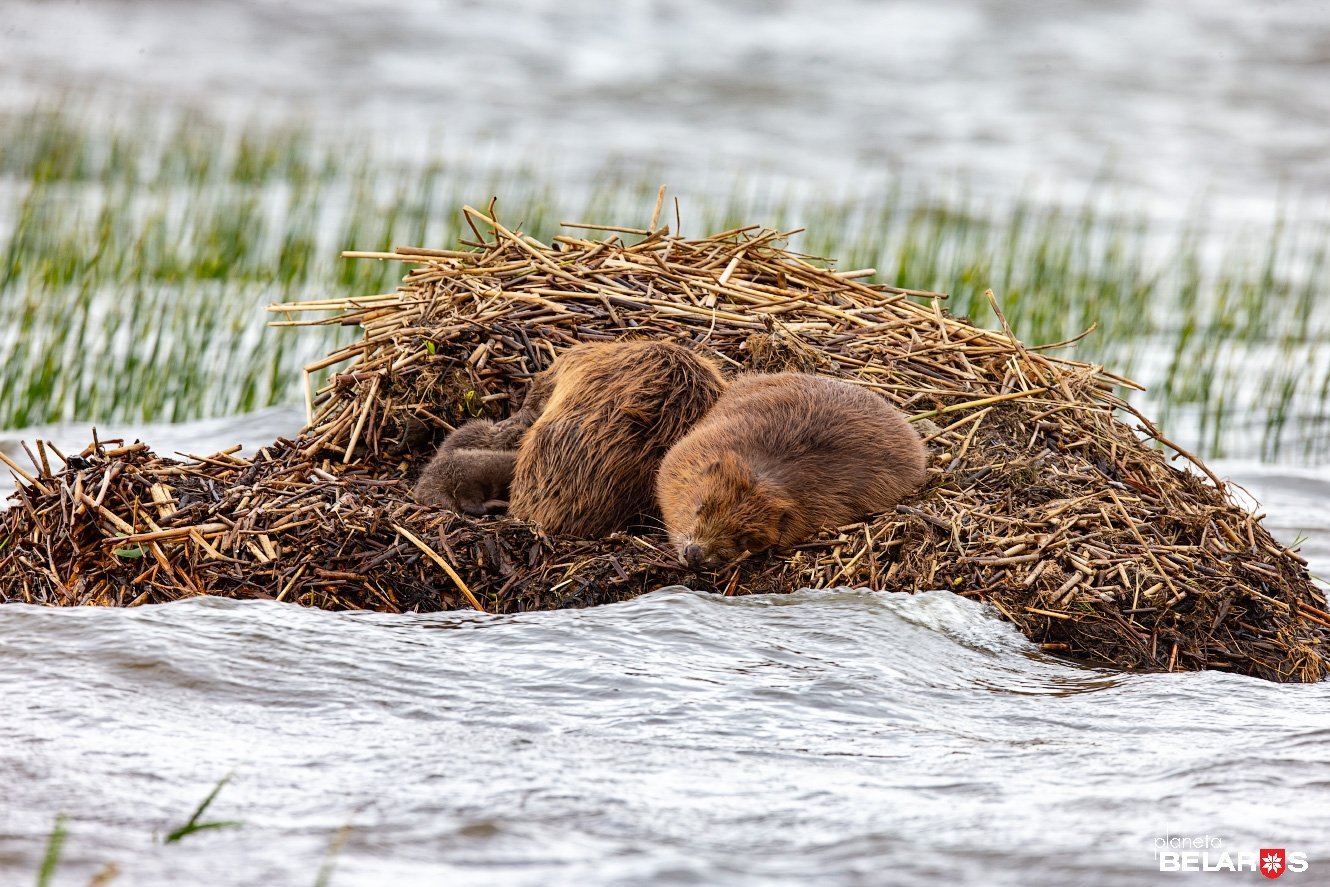 The beavers were really in the place where Oleg said. I parked the car on the beach, set up the equipment, and started to wait.

A family of beavers is sleeping on a destroyed hut

The animals were asleep. A strong wind was blowing, and the waves lapped the shore, but the remains of the hut were covered by a small thicket of reeds. I was thinking of the best way to photograph this weather-stricken family. Beavers are nocturnal animals. It was noon, so they could have slept until the evening, while I had to go back to the seminar. 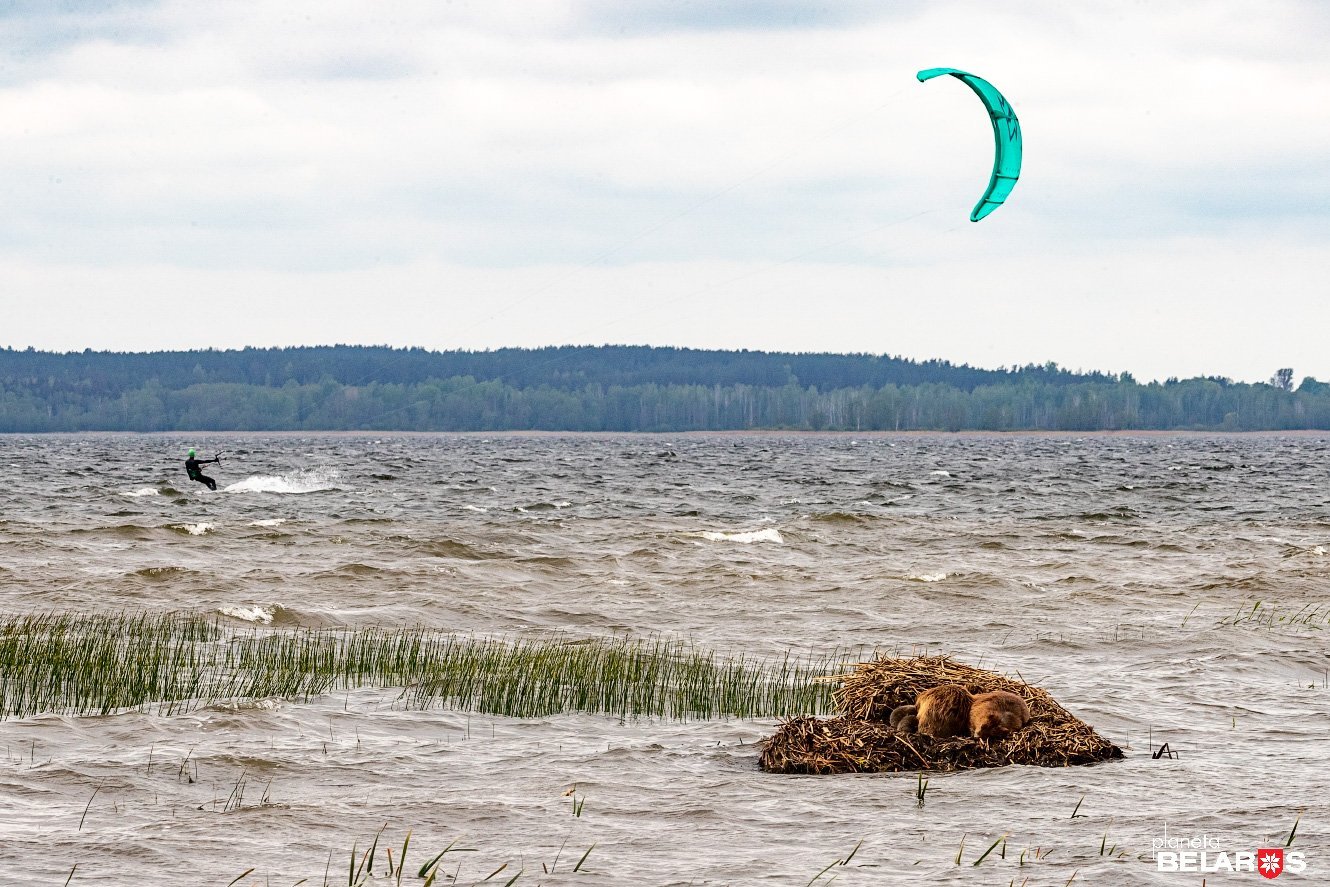 At that moment, a windsurfer appeared in the background. This was more interesting. Real Braslav exotics! 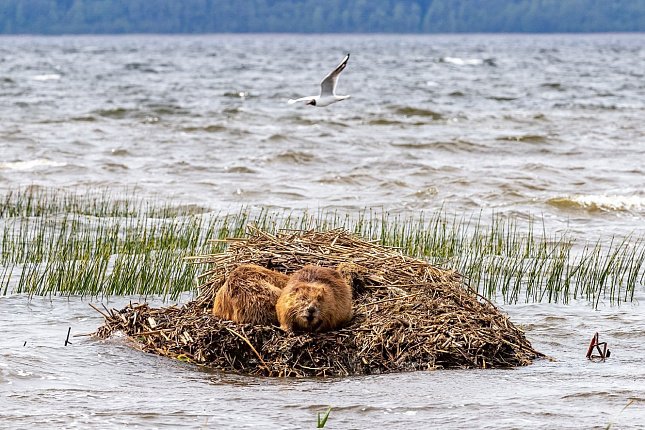 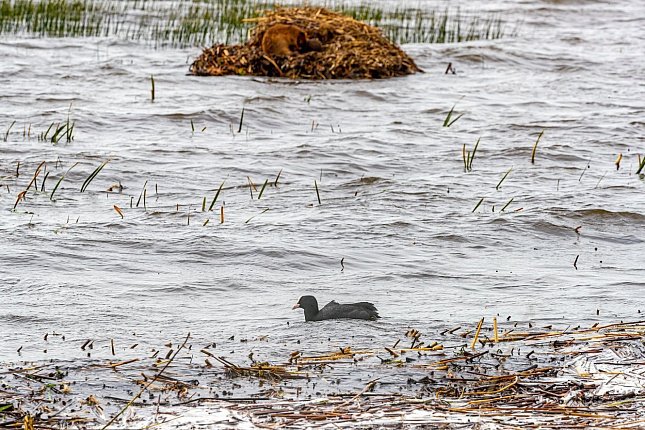 Eurasian coots (Fulica atra) were swimming by, and terns were flying over from time to time. Finally, the male beaver woke up! 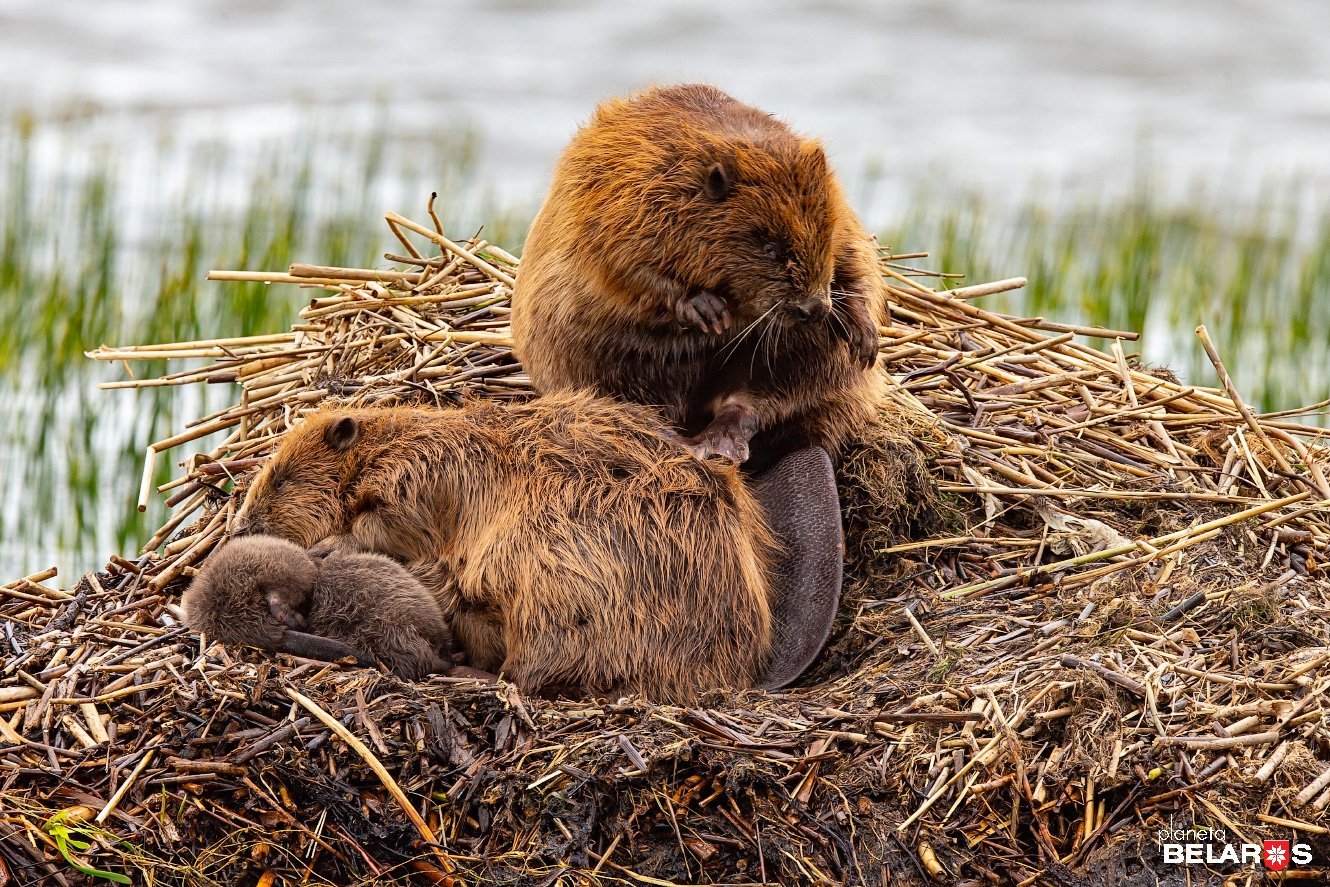 At first, he preened himself on the very top of the former hut. 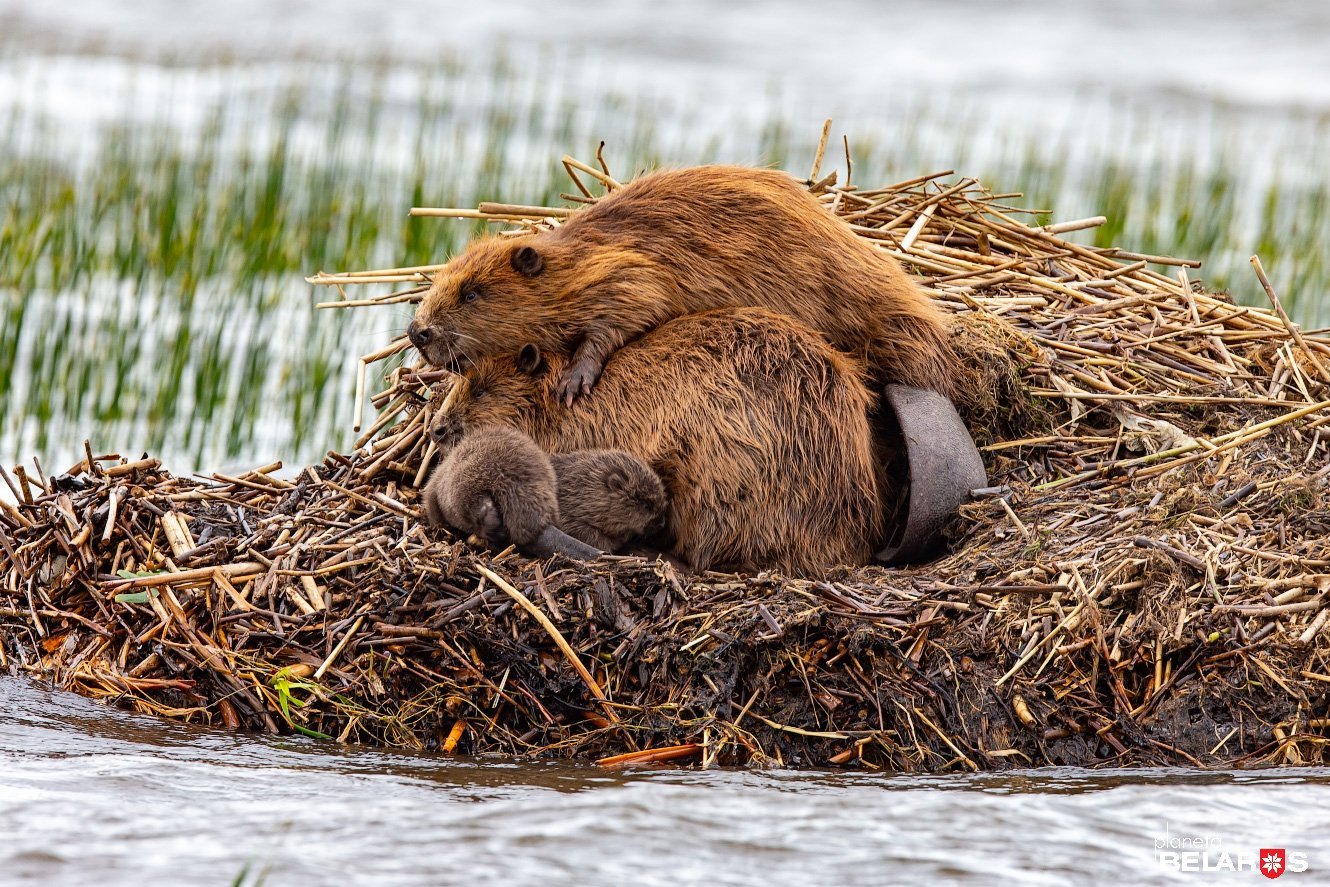 Then he rejoined his family. 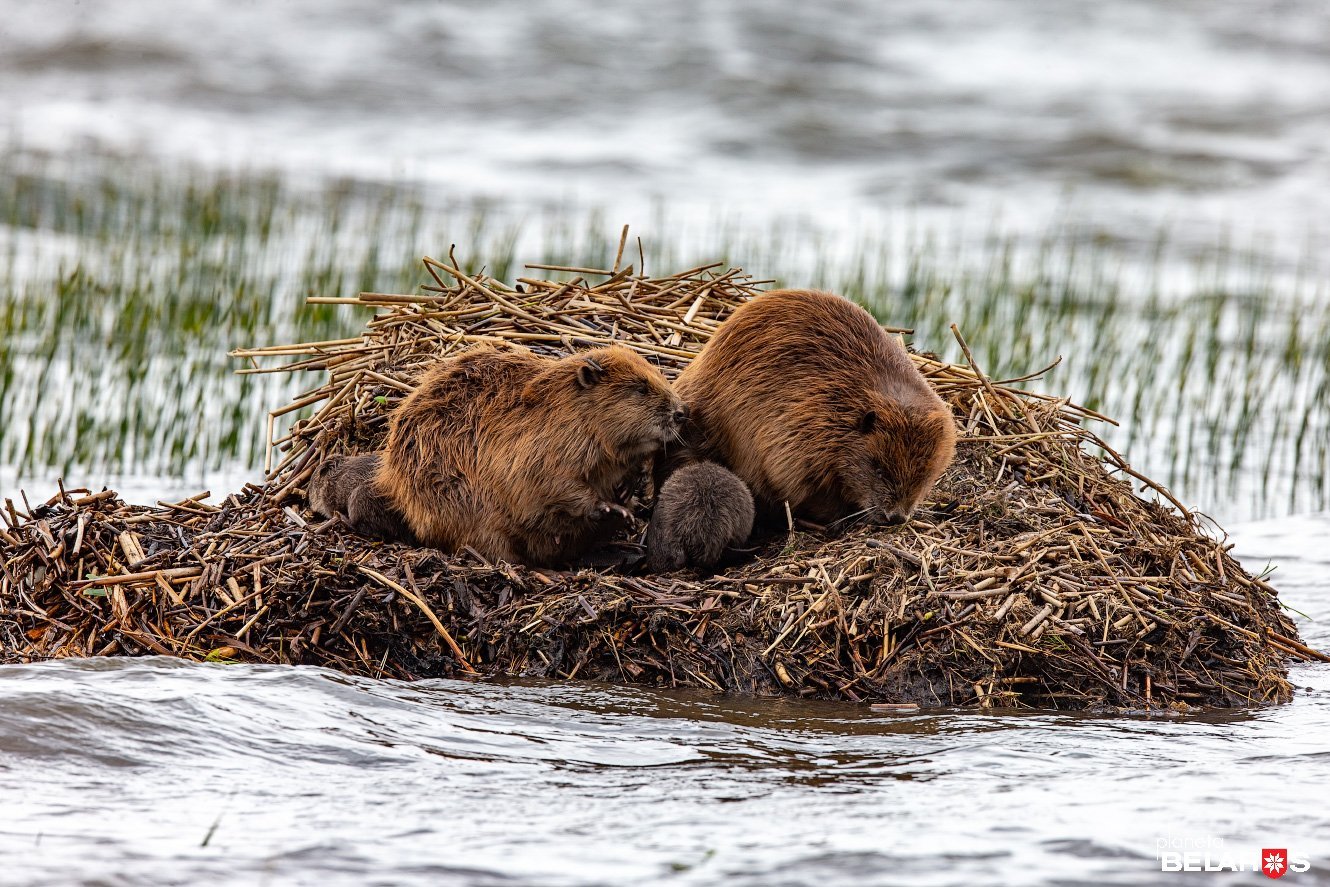 The cubs also woke up. Immediately they began to demand milk from their mother. Unfortunately, it was difficult to record the moment of feeding: the heads of the beavers were completely invisible.

Nearby, the life of the coots was bubbling. Looks like the night's storm didn't affect them in any way, so the family was sorting things out. 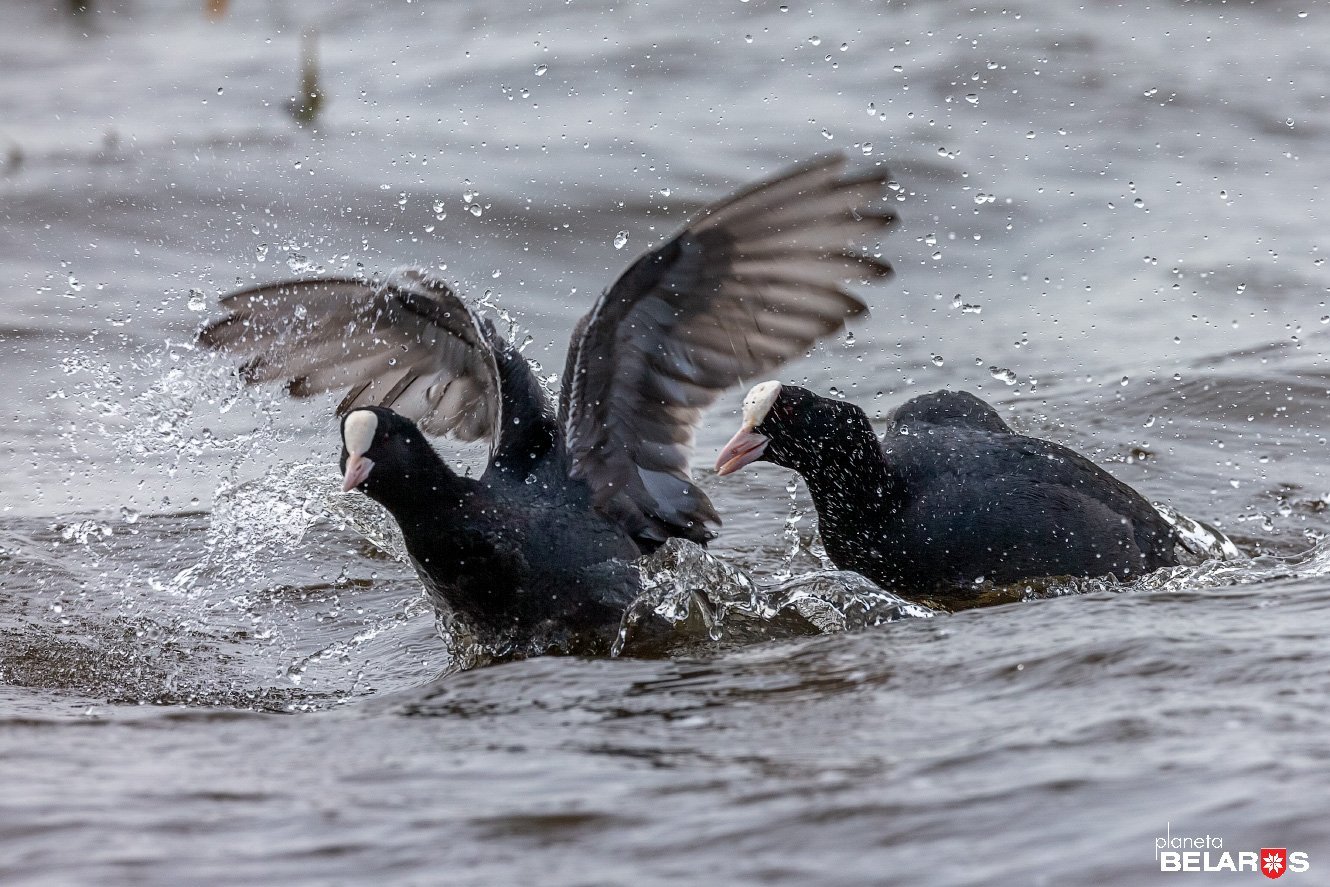 Sometimes the husband was trying to be sweet. 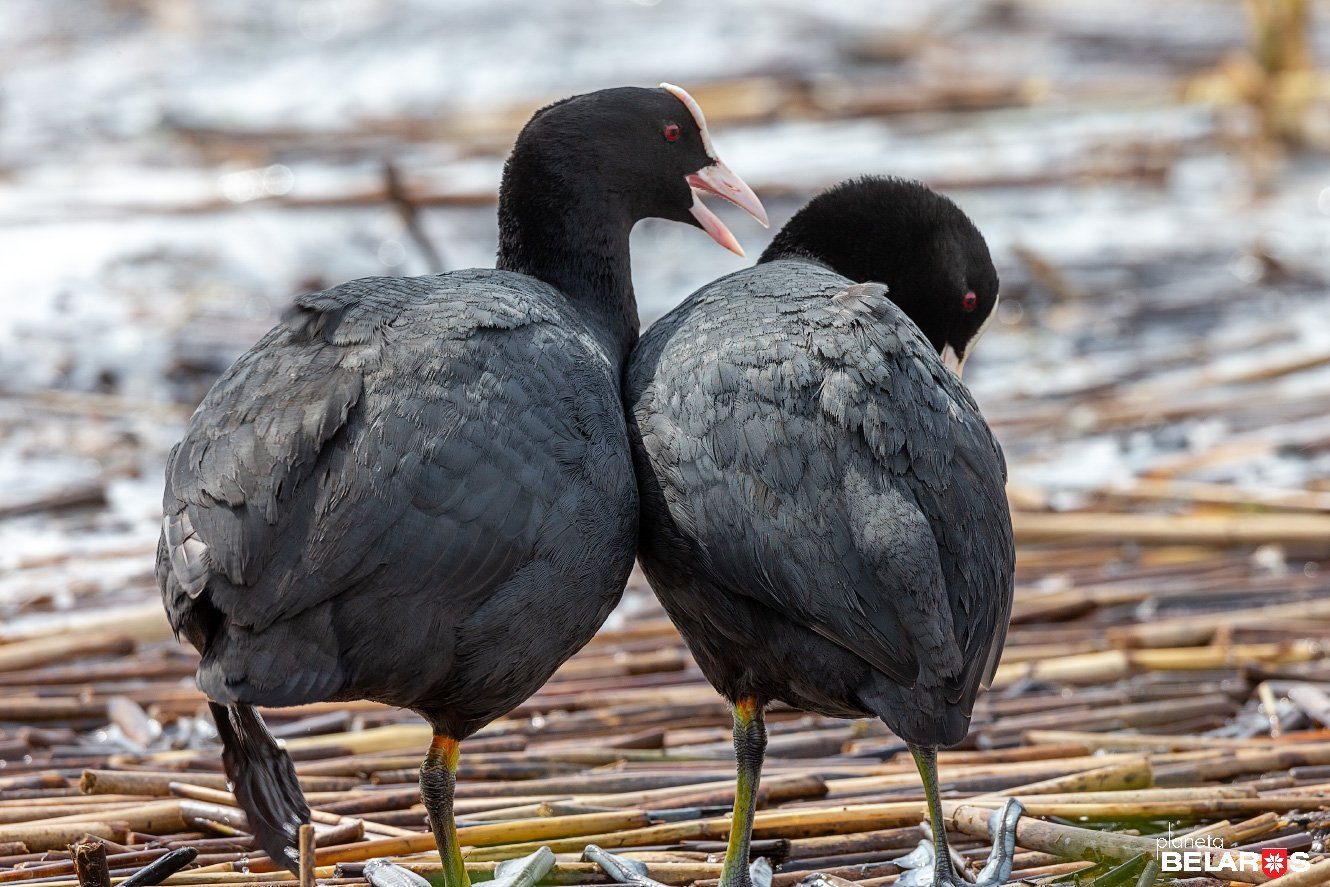 The wife was modestly turning away, probably, replying: "First you bring some food!» 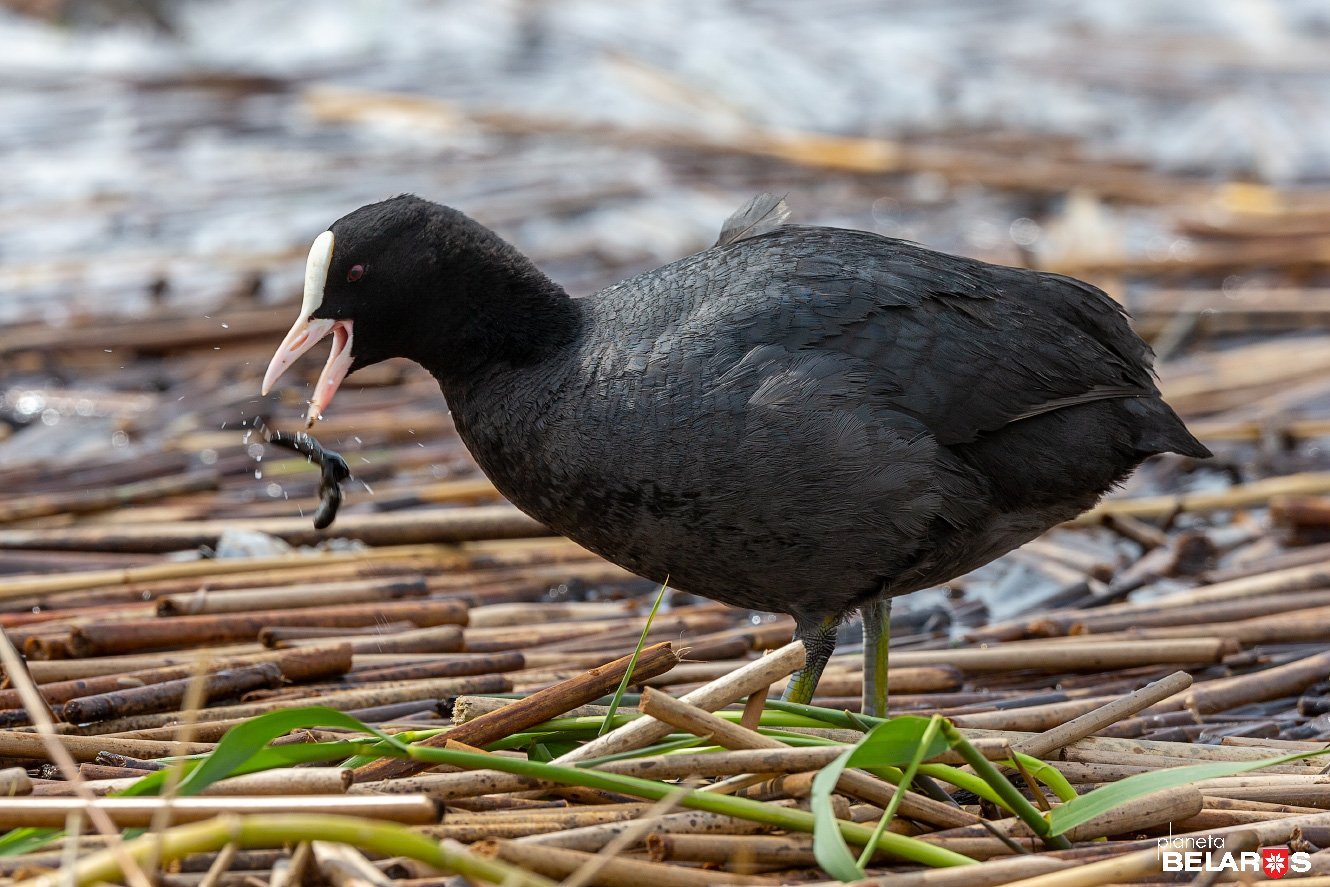 I had to go back to Perebrodye village. I decided to show how far from the coastal cafe the beavers were living. Thus, I put my fishing boots on and started to approach the former beaver hut. 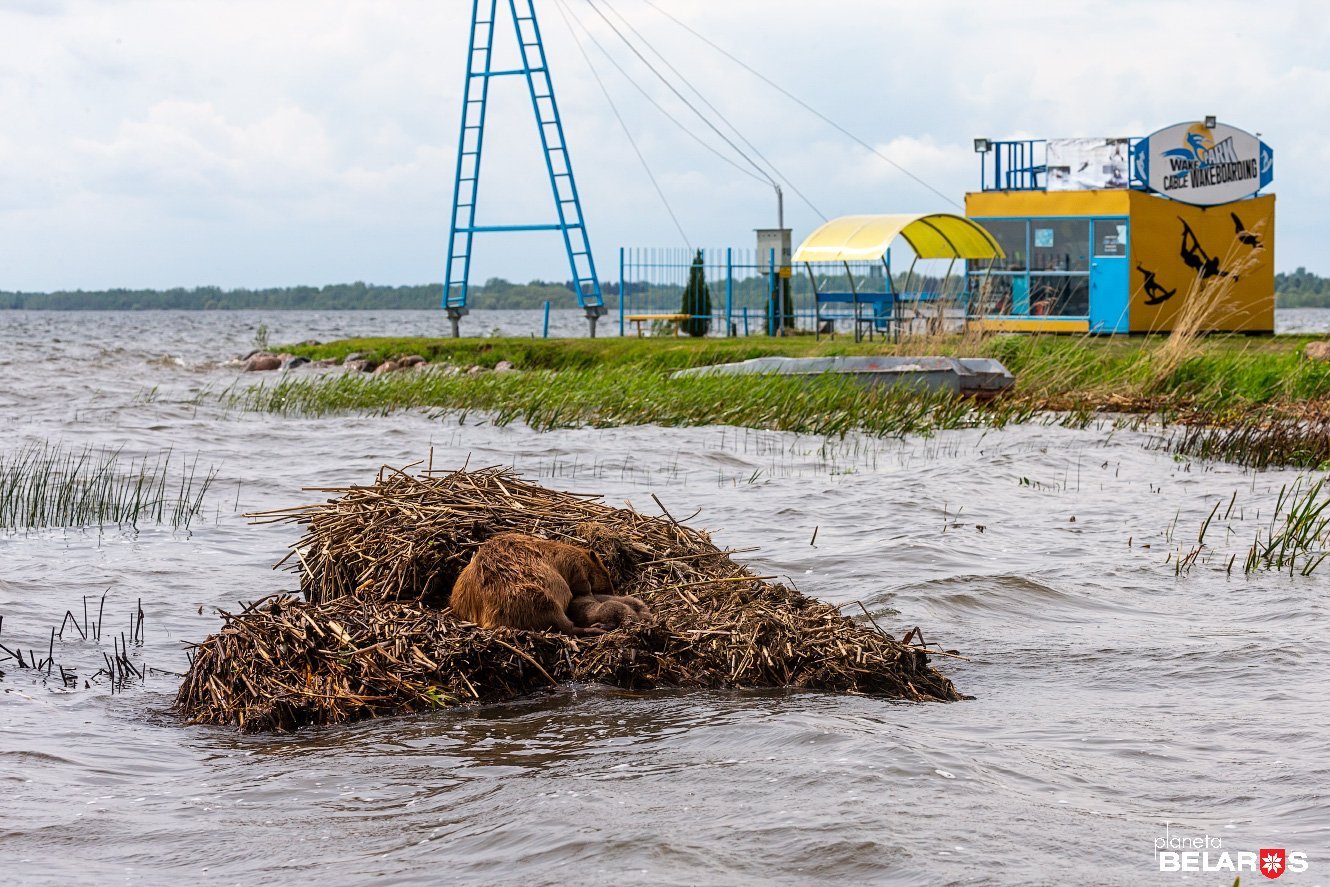 The male had already left the family by this time. 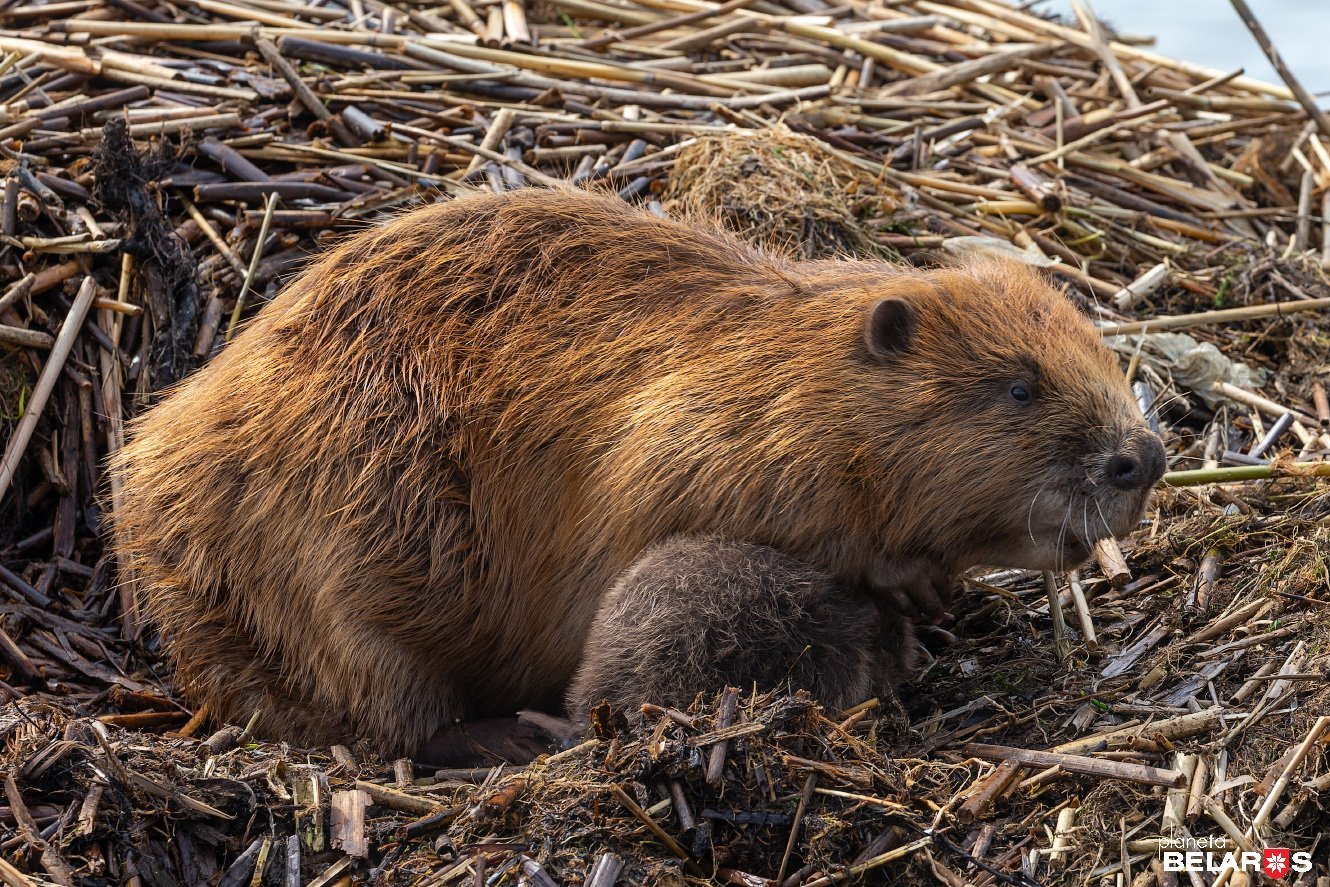 The animals are about seven meters away. 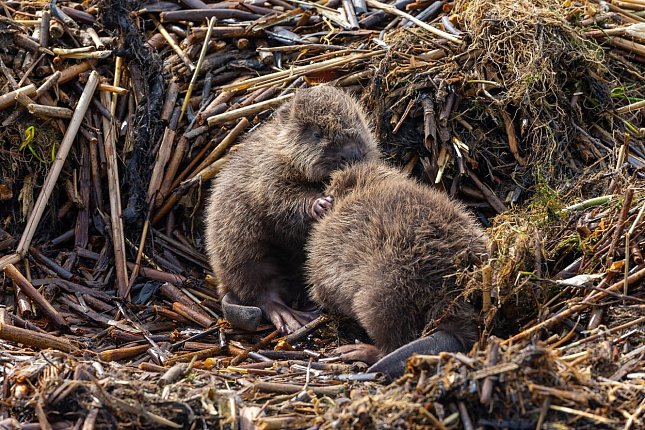 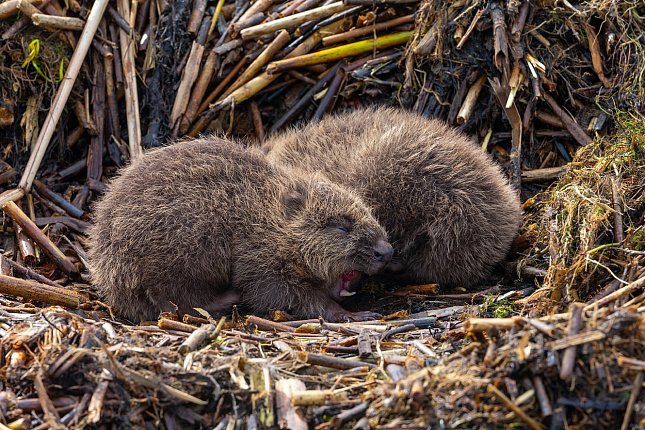 For the first time in thirty years of photo-hunting, I had the opportunity to photograph the beaver cubs like this! I took a few shots and walked back to the car. 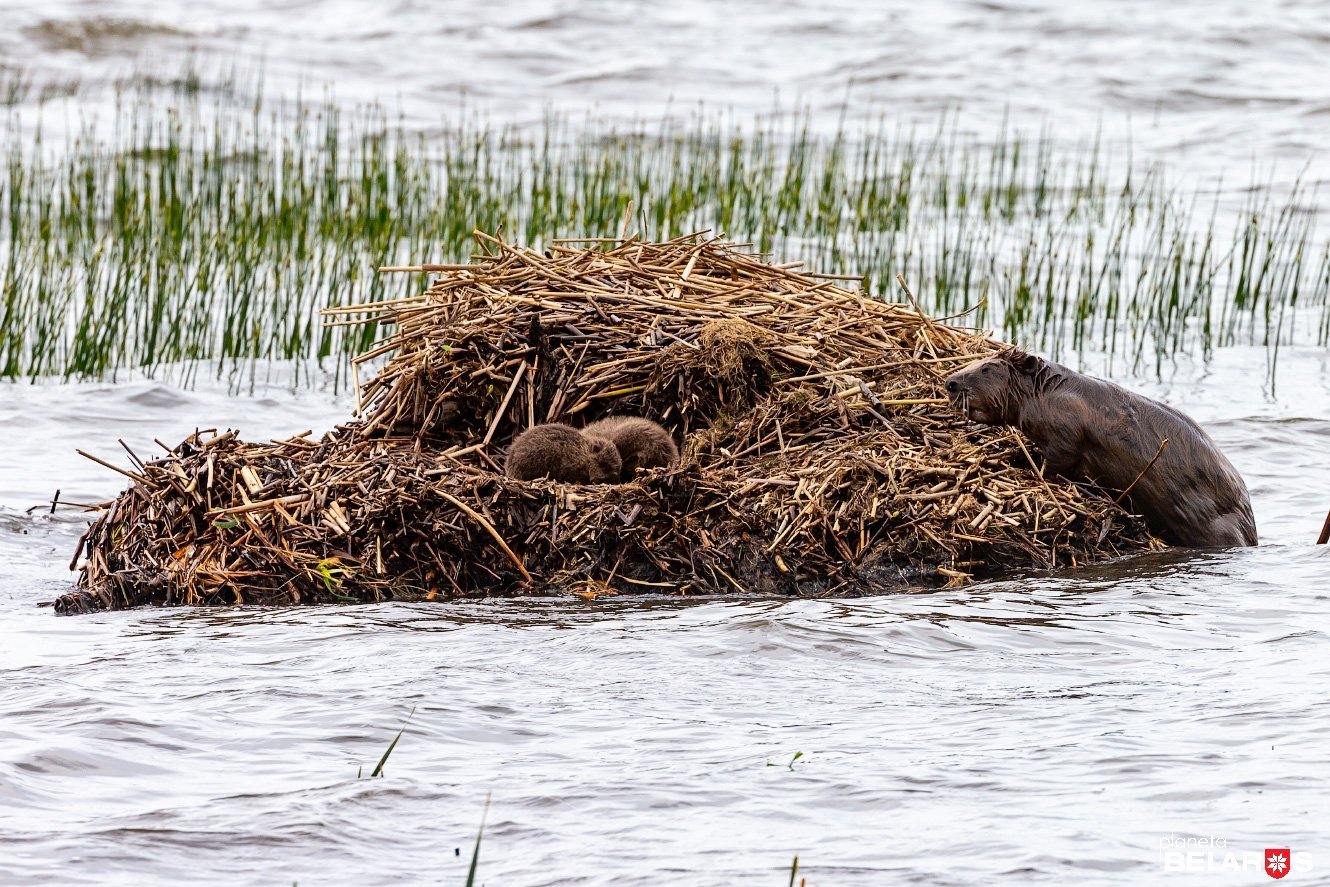 At that moment, a female appeared out of the water. 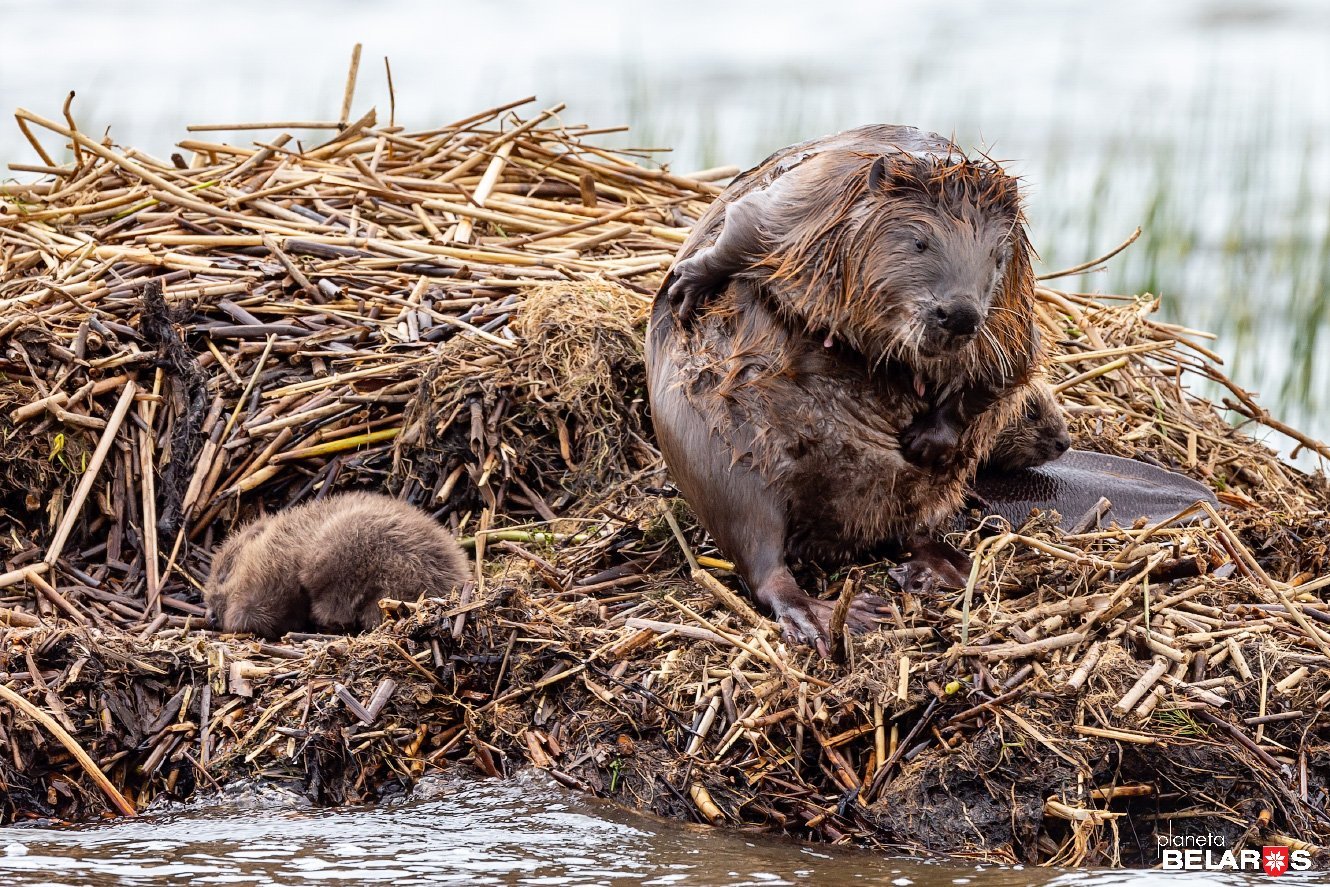 The female beaver began to preen herself vigorously, wiping her wet fur with her paws. 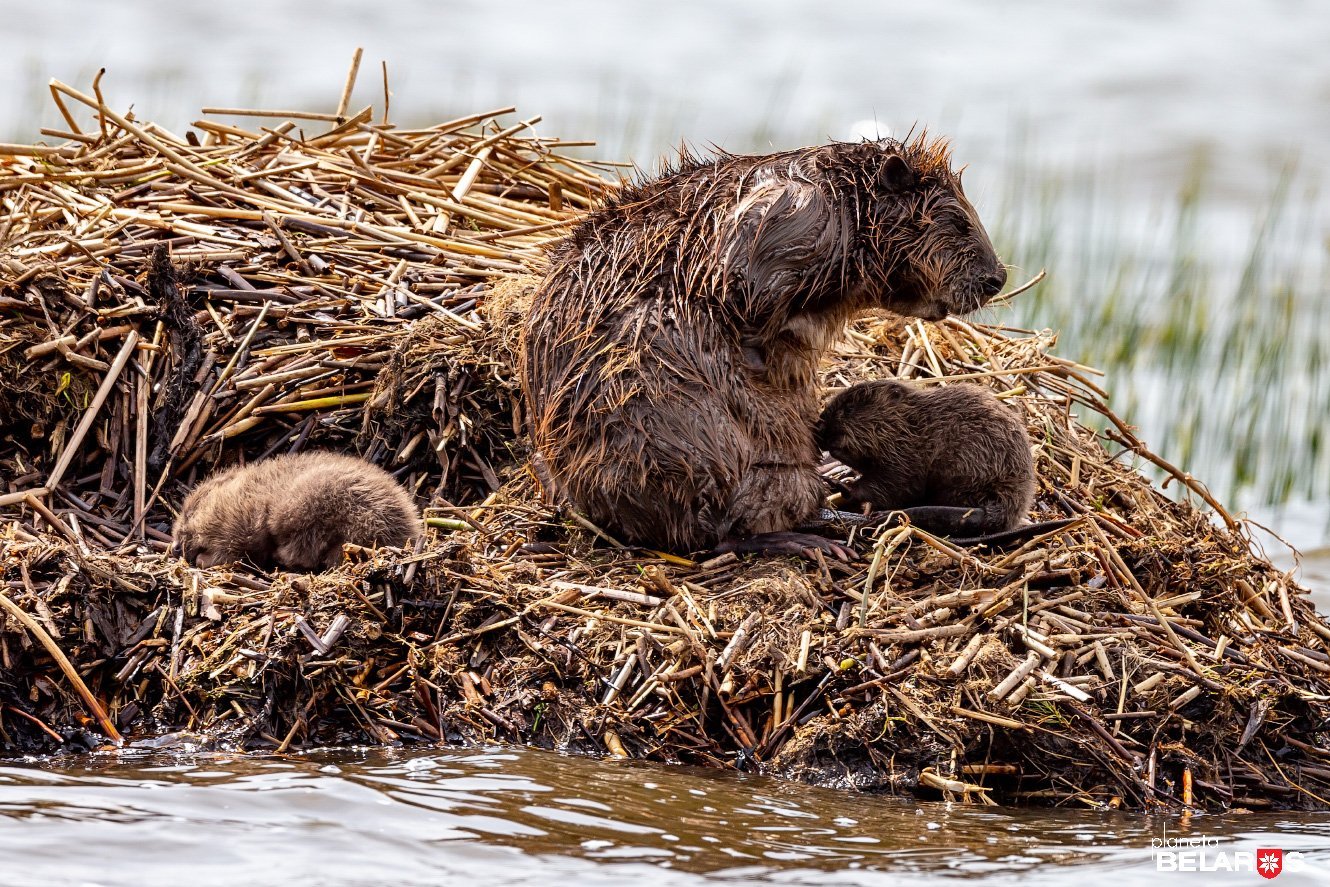 One cub woke up and immediately went to his mother's tit. 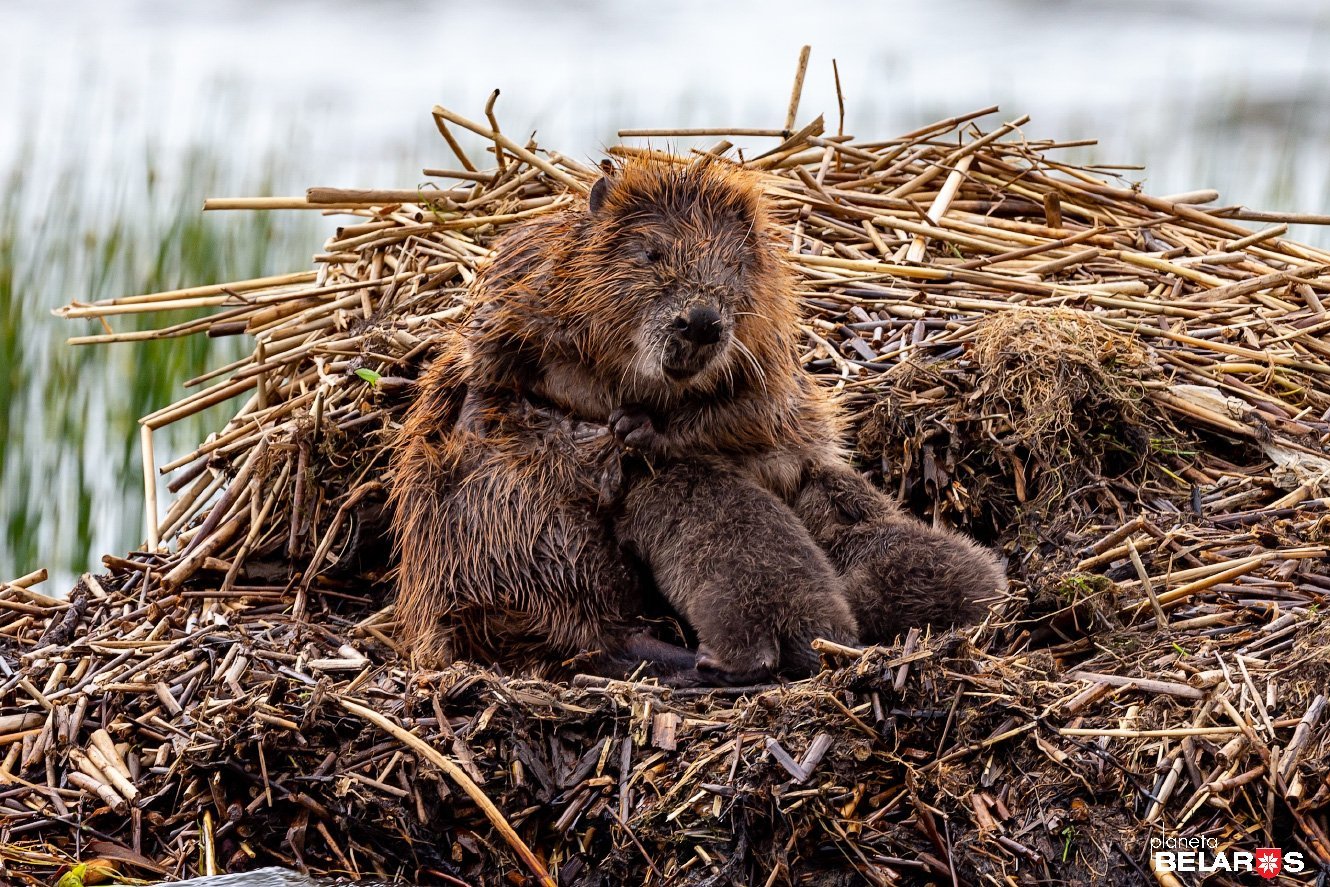 A minute later, both little beaver kids were having a breakfast.

But my time was over.

I decided to come here in the evening after the end of the event, and maybe even to shoot more next  morning. 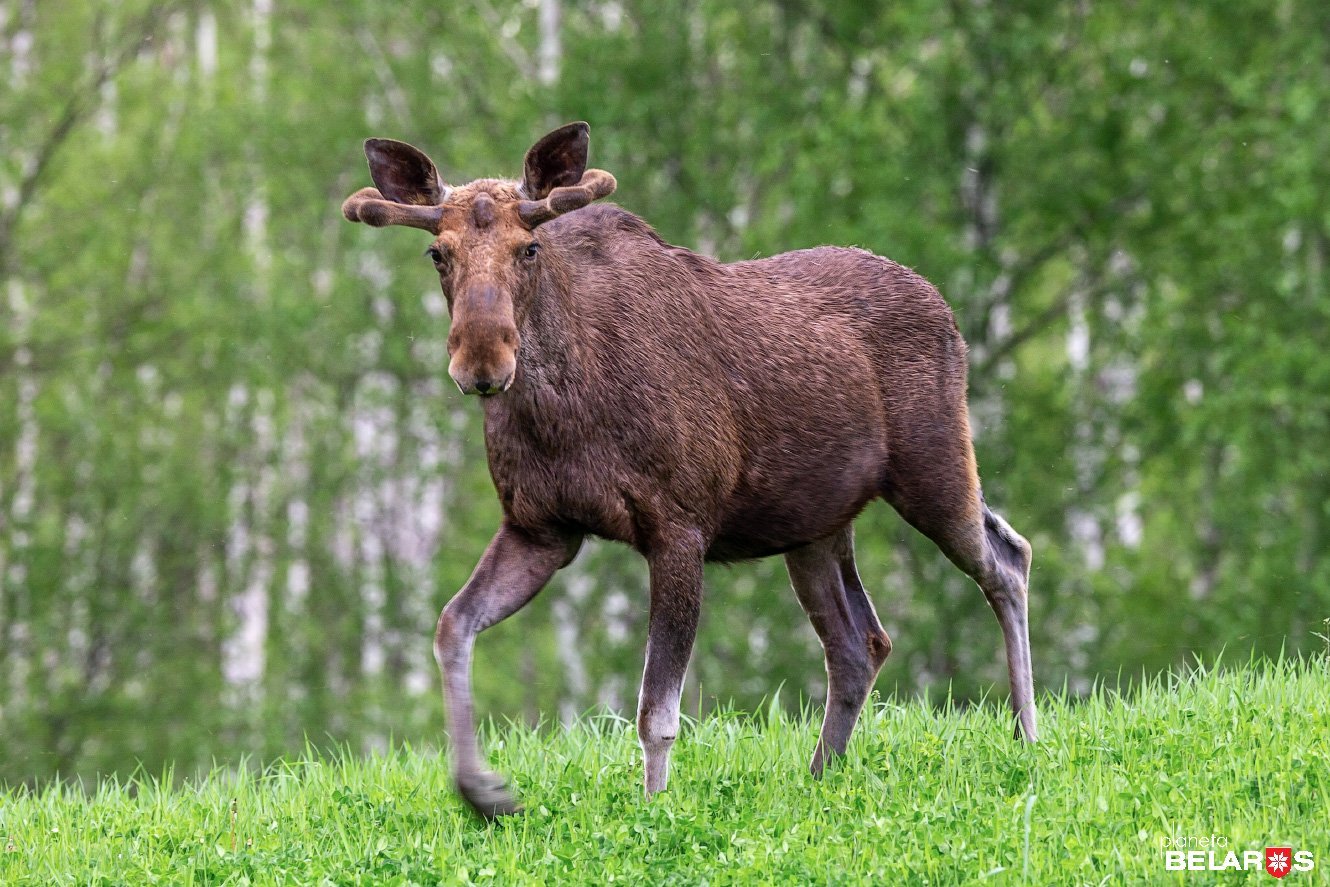 But in the evening, I was first busy with moose near the village of Ikazn, and then it started to rain. Suddenly it became too dark, so it was impossible to shoot. 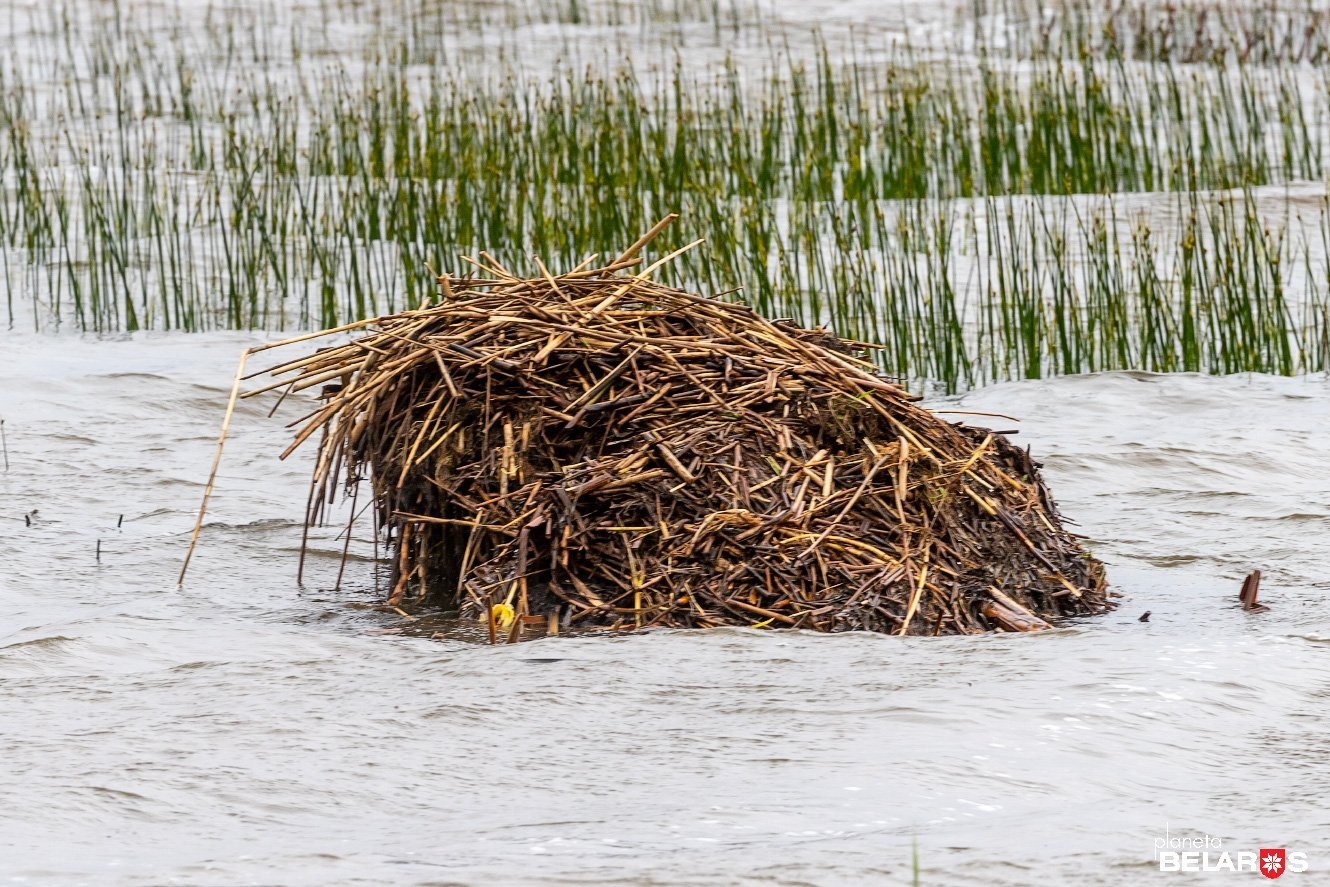 Next morning we were waiting for a complete disappointment: another half of the hut had been washed away during the night. The beavers didn't even have a place to sit.

Perhaps they will be lucky enough to find another nesting site and build a new home for themselves. But it seems to me that this was not too likely, since there are a lot of beavers around. All territories are divided. It’s not easy to start a new life with young children …

But, as always, it’s better to hope for the best and to wish good luck to this family!

The “dead zone” of Chernobyl: blossoming To shoot blooming gardens, which also had to emphasize the absurdity of the situation and the power of nature, which can correct human mistakes.