There are territories in Belarus that have a unique set of qualities that can’t be found in other. The Braslav land is also special in its own way. A visitor will see a “cocktail” of a huge number of lakes with small villages on their shores, rugged terrain, many wild animals and hospitable people who are used to tourists. All that creates a special aura in this part of Belarus.

Once in the Braslav district, I have somehow to combine the panoramic photography and photo hunting. Yes, you can achieve a good result in both, but also you want to get the most out of each trip. And it depends a lot on the season, day, and weather conditions…

Been in the Braslav district, I always wake up before dawn to see if there is a glow of the rising sun in the east, and only after that I finally decide on the route. 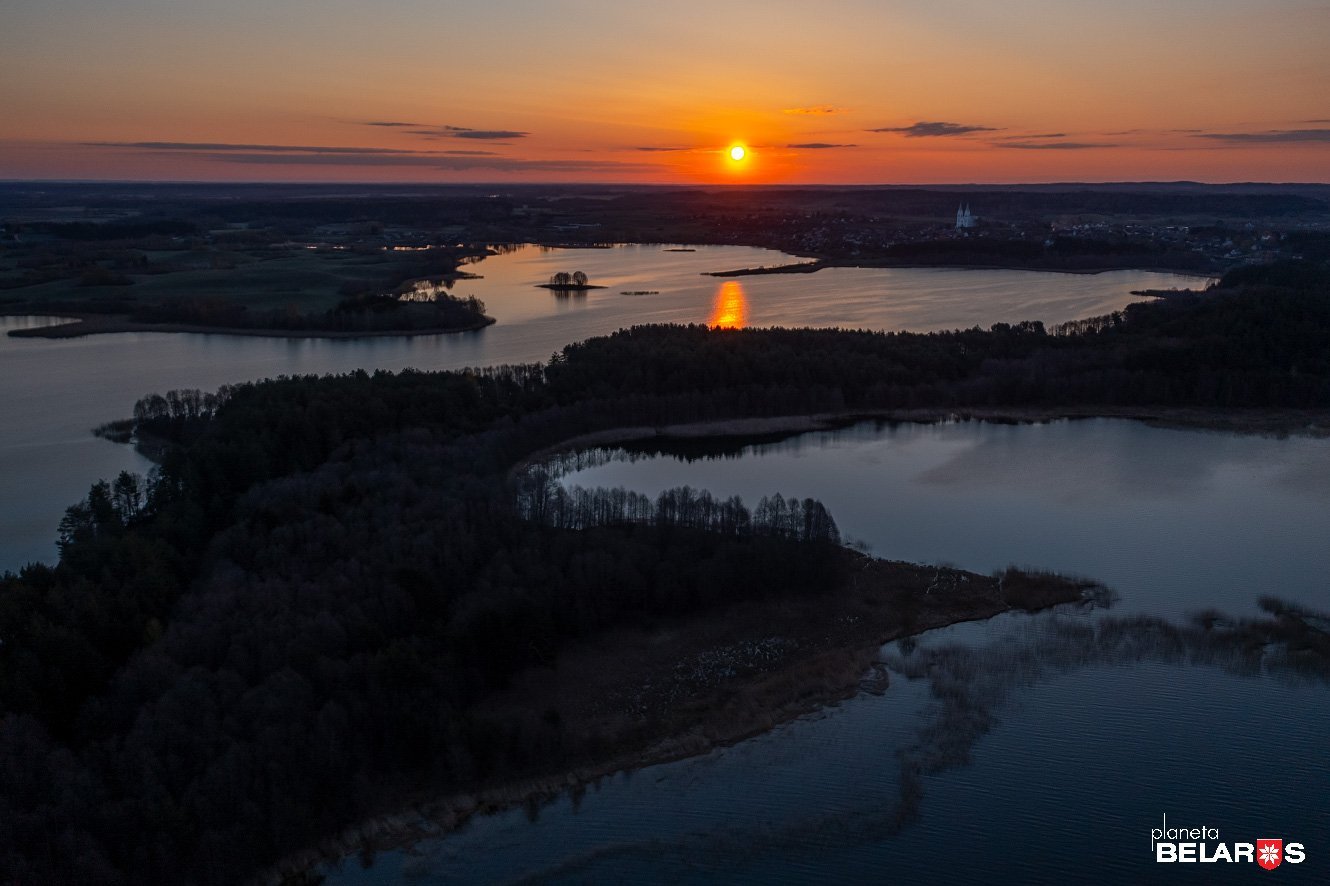 May 1, 2021. Slobodkovskaya eiscir ridge (an eiscir is a glacial landform made by linearly elongated, narrow hills). I decided to devote my time to the lakes. While driving, it turned out that the sky at dawn wasn’t too perfect, but the point of shooting cannot be changed now... 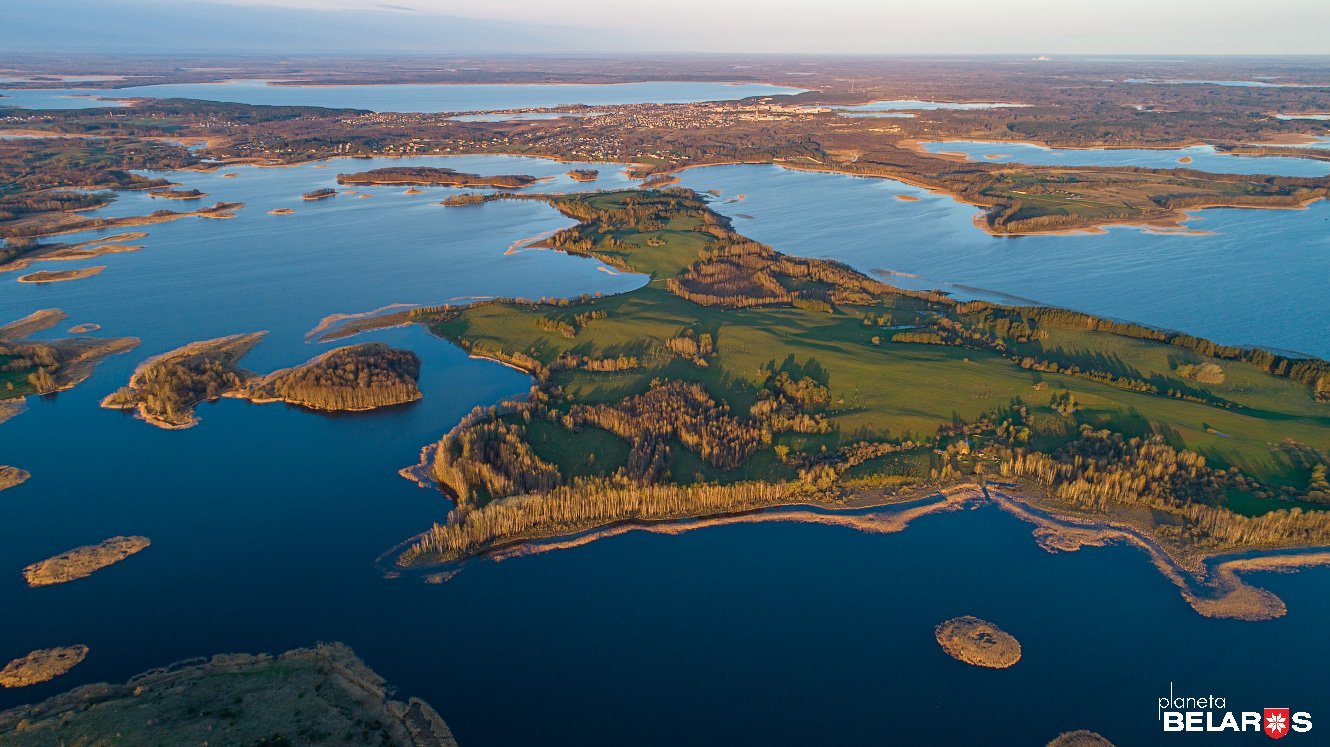 A huge peninsula between the lakes Nedrovo, Nespish, and Voiso. In the background there’s the town of Braslav and Drivyaty Lake. We decided to create a thematic resource on the Braslav district on the "Planet Belarus" and present all the interesting tracts. Once upon a time, people used to live on this peninsula; so, we will have to tell about these former villages and hamlets. 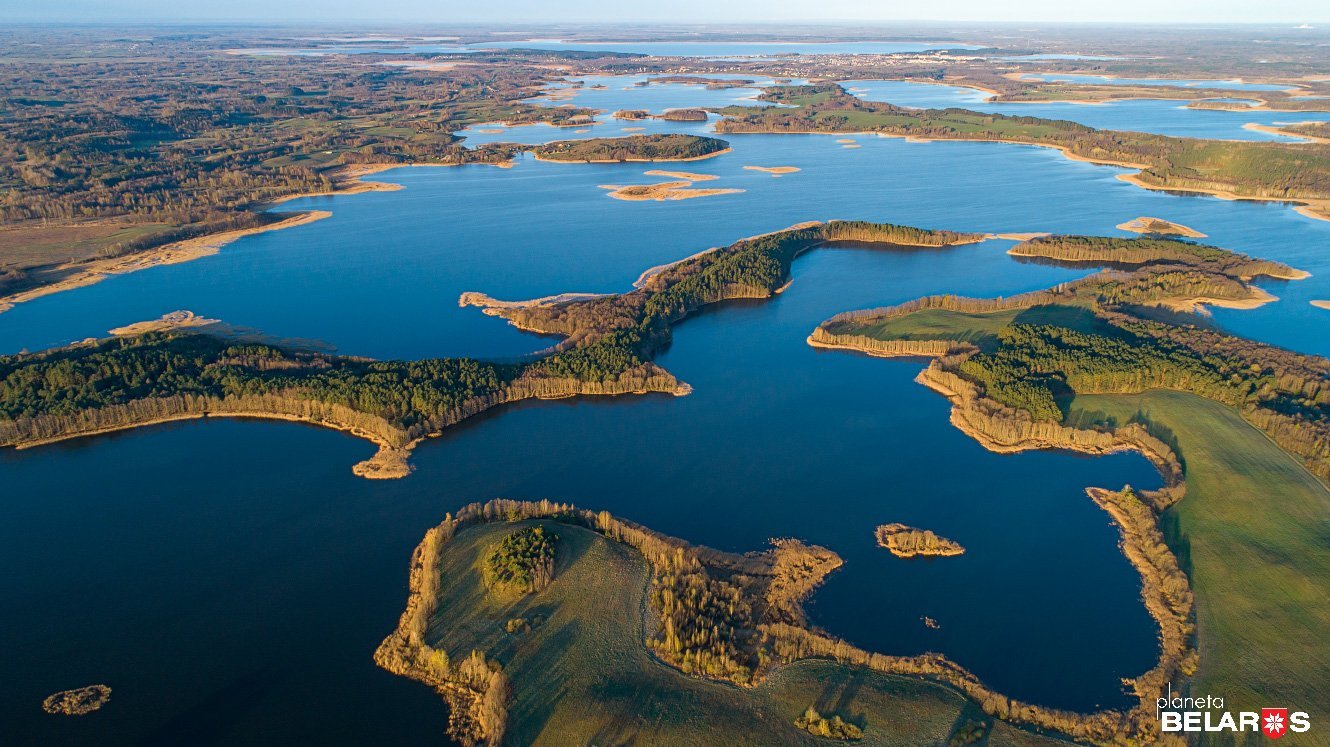 The eiscir ridge between the lakes Potsekh and Nedrovo pictured from the village of Slobodka. Curiously, the color of the water after winter is the same everywhere. By the end of each summer, the lake, which is closer to the village, turns green…

Islands on Snudy Lake. Long ago it was also populated by people: one can still see the preserved foundations of the houses…  However, now there is just a bird kingdom. 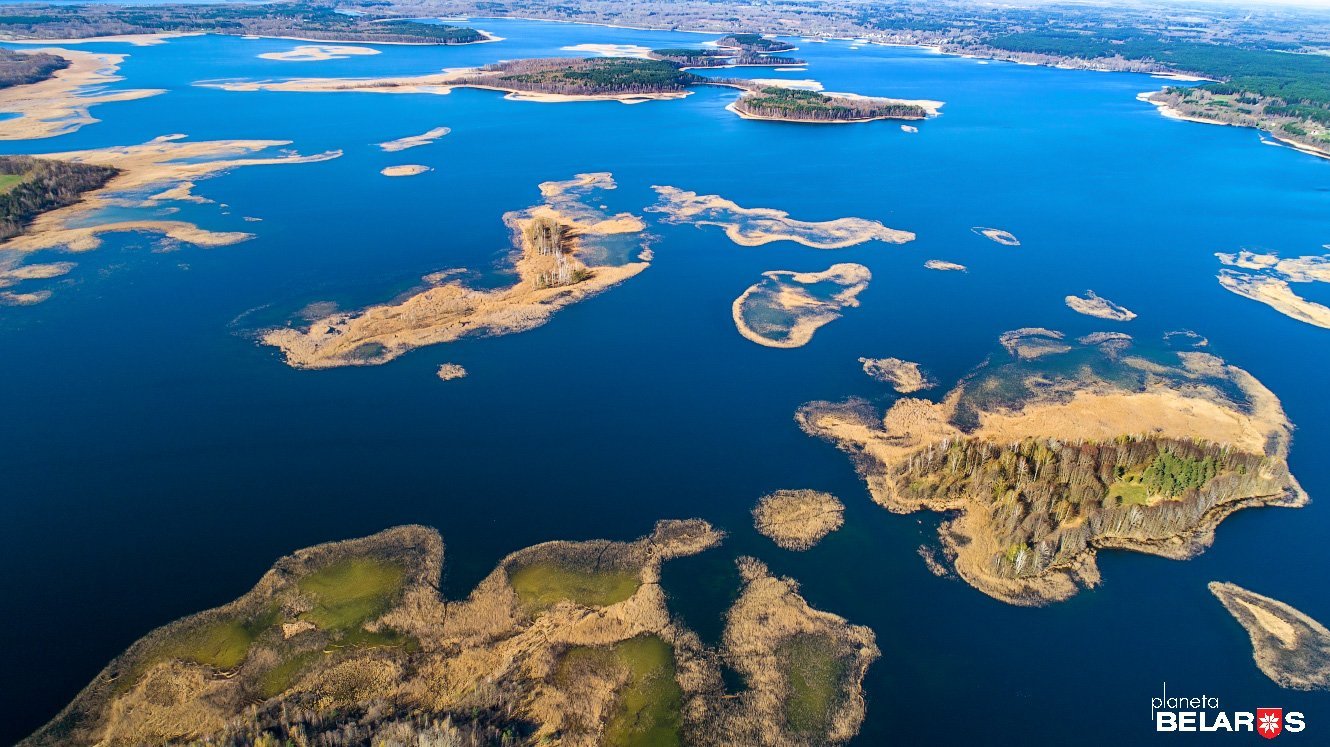 Lake Strusto also has many islands. The most interesting one is Chaichin. It has its own inner lake.

At the village of Krasnogorka, I notice a female moose near the road. I drive past, turn around, prepare my camera equipment, and return back slowly. 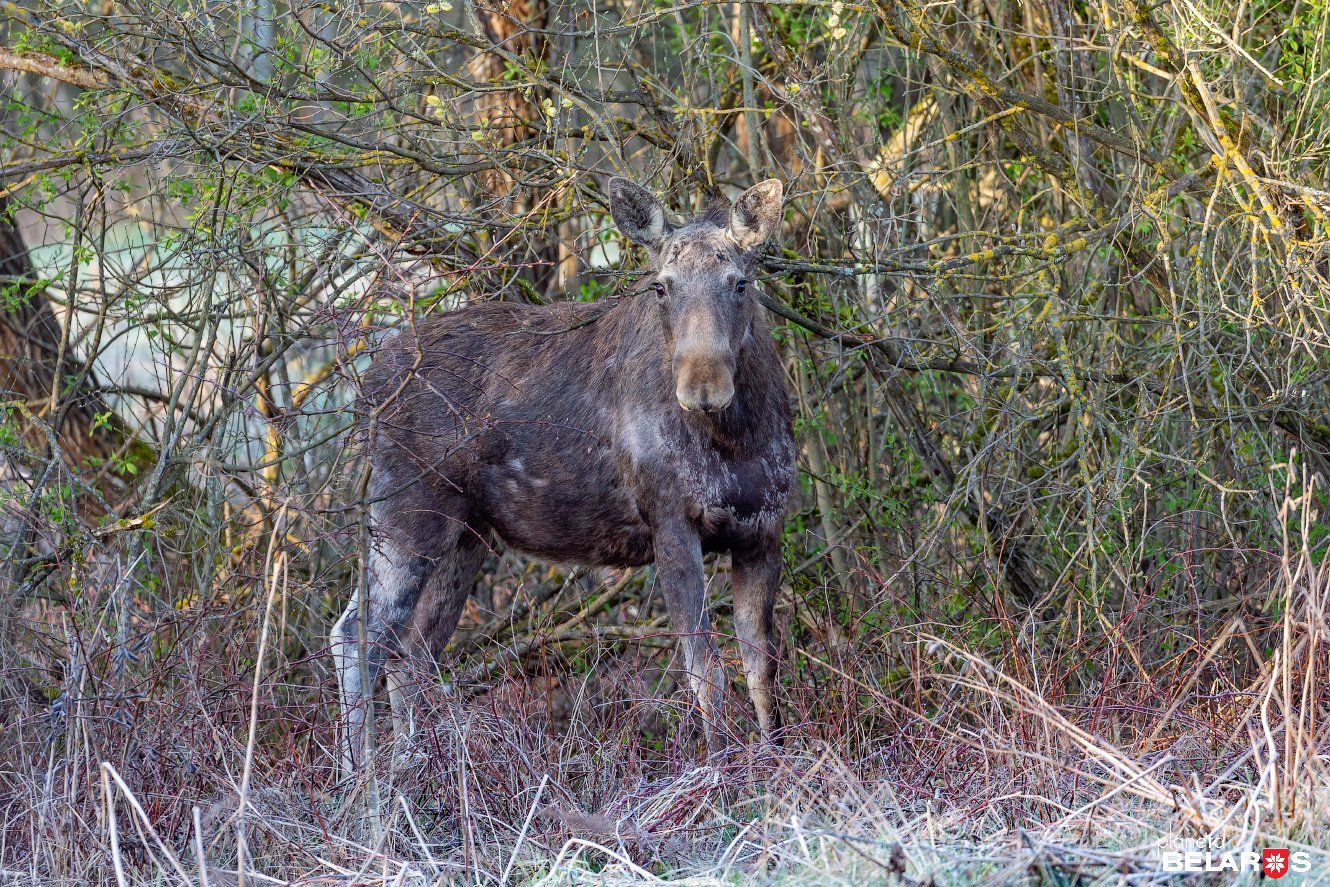 The moose warily looks in the direction of the car, but does not run away. I turn off the engine and wait. 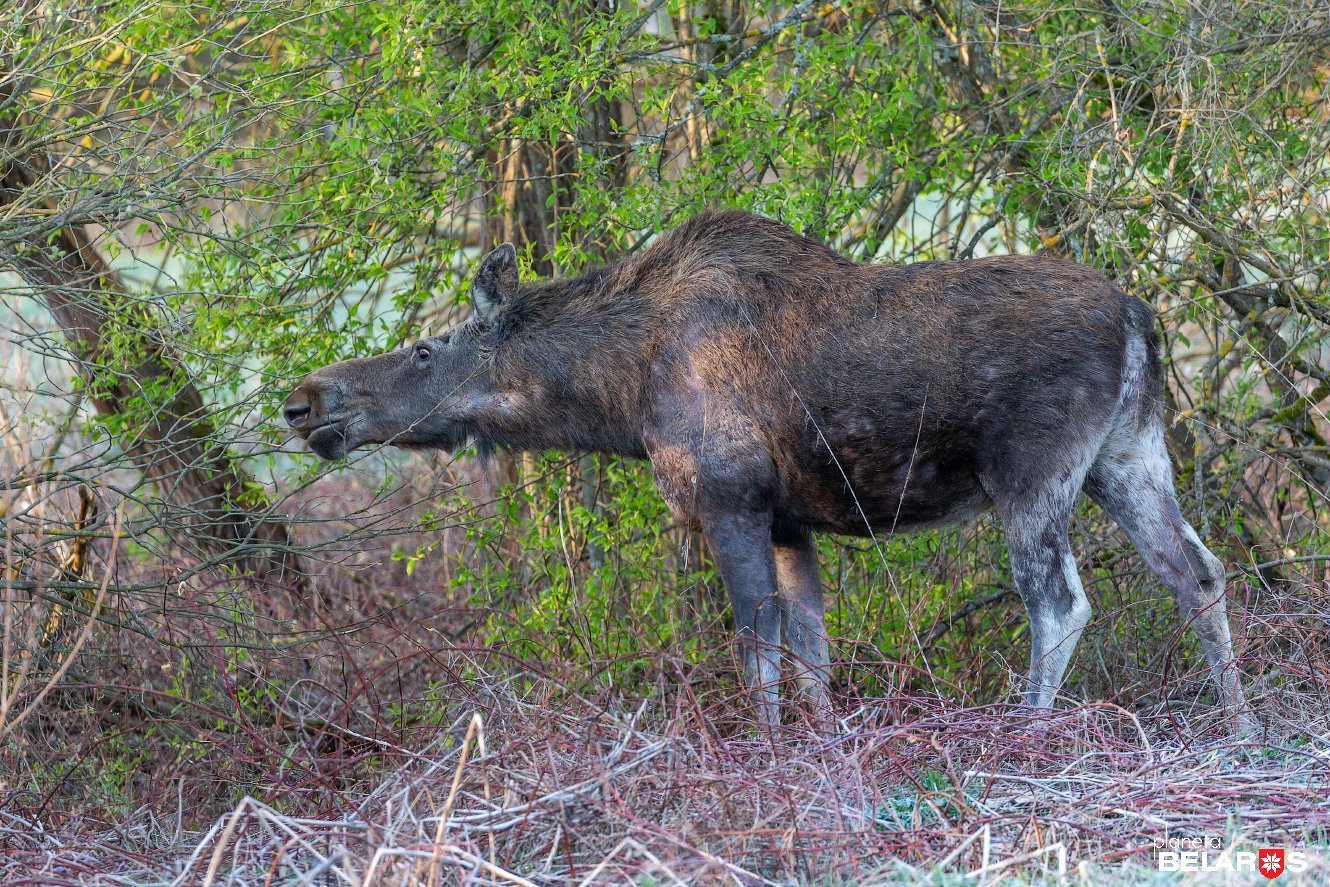 I want to make a frame not of a wary animal, but to record its normal life. 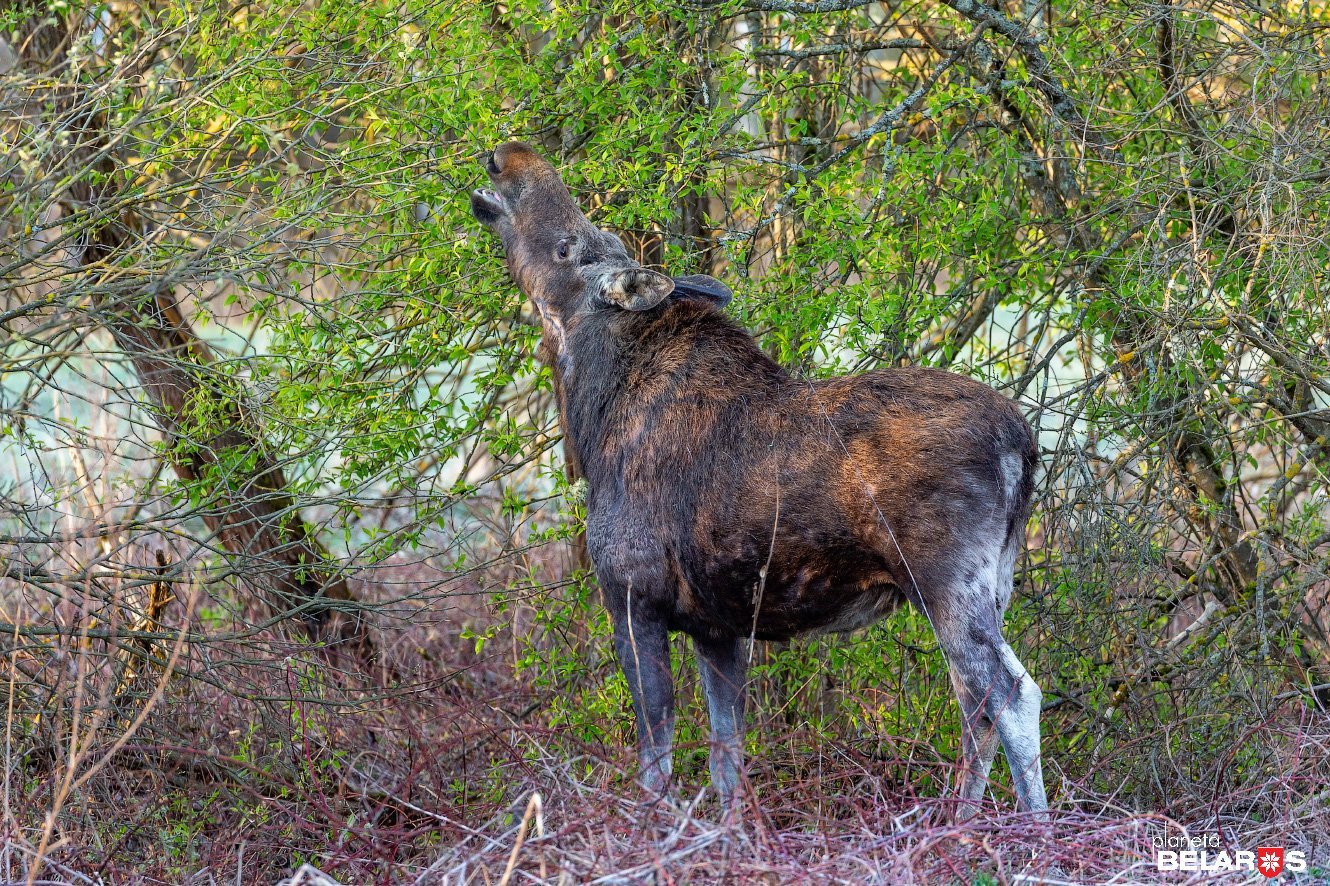 To some extend I succeed, the moose begins to eat fresh leaves of  bird cherry, but then still walks away. 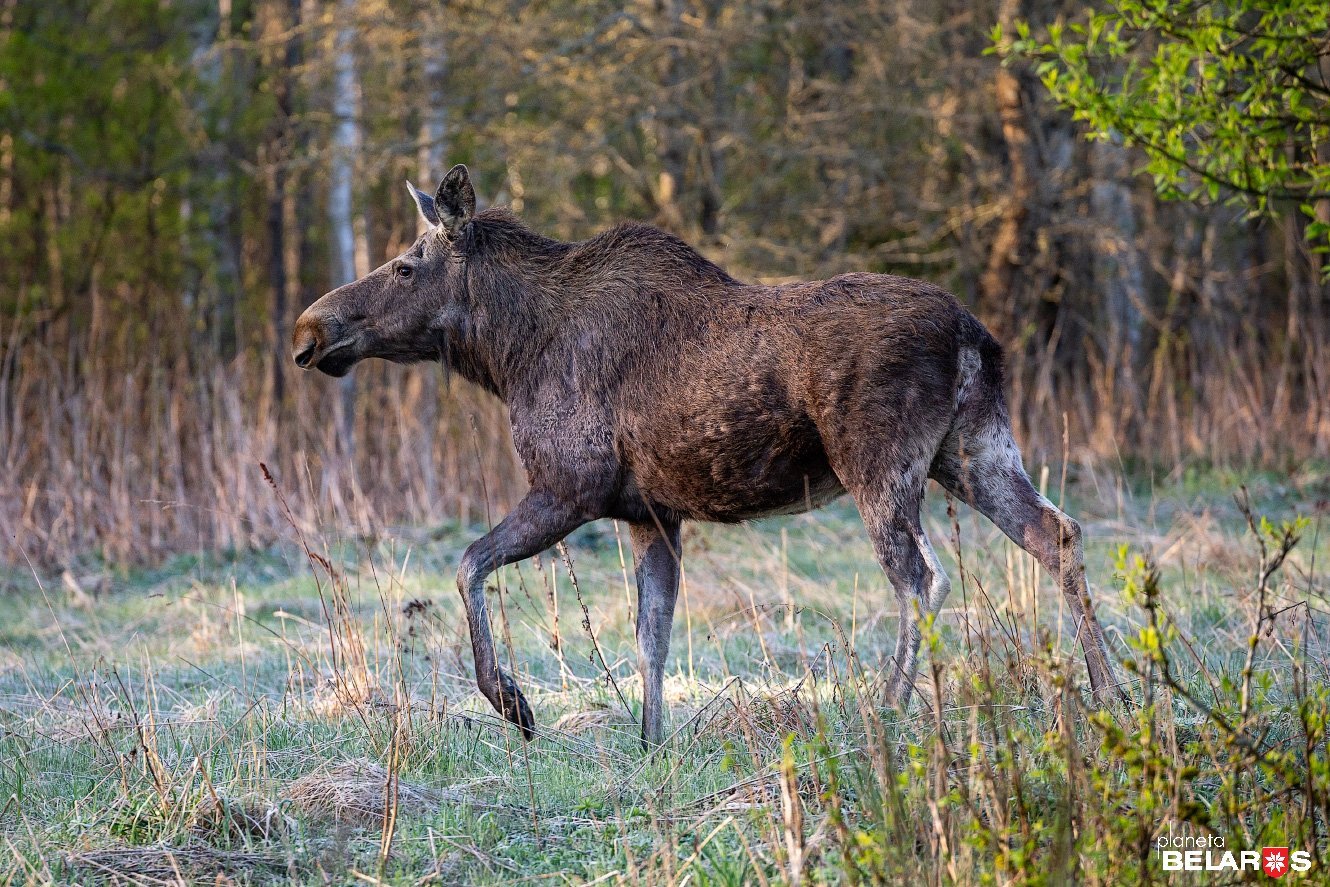 The calf, which I didn't notice at first, also runs away after her. 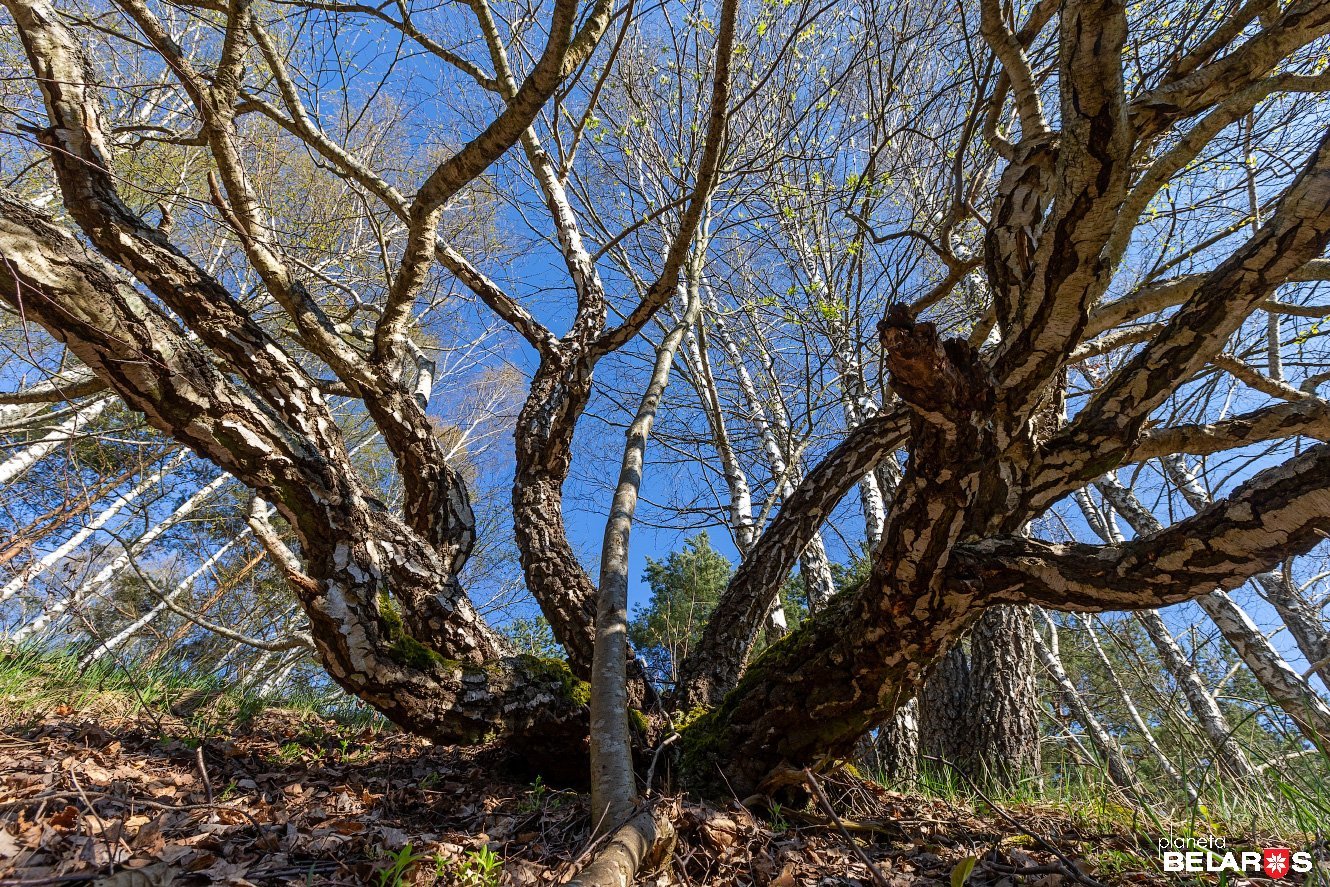 A curly birch (Betula pendula Carelica) on the steep shore of Lake Snudy. 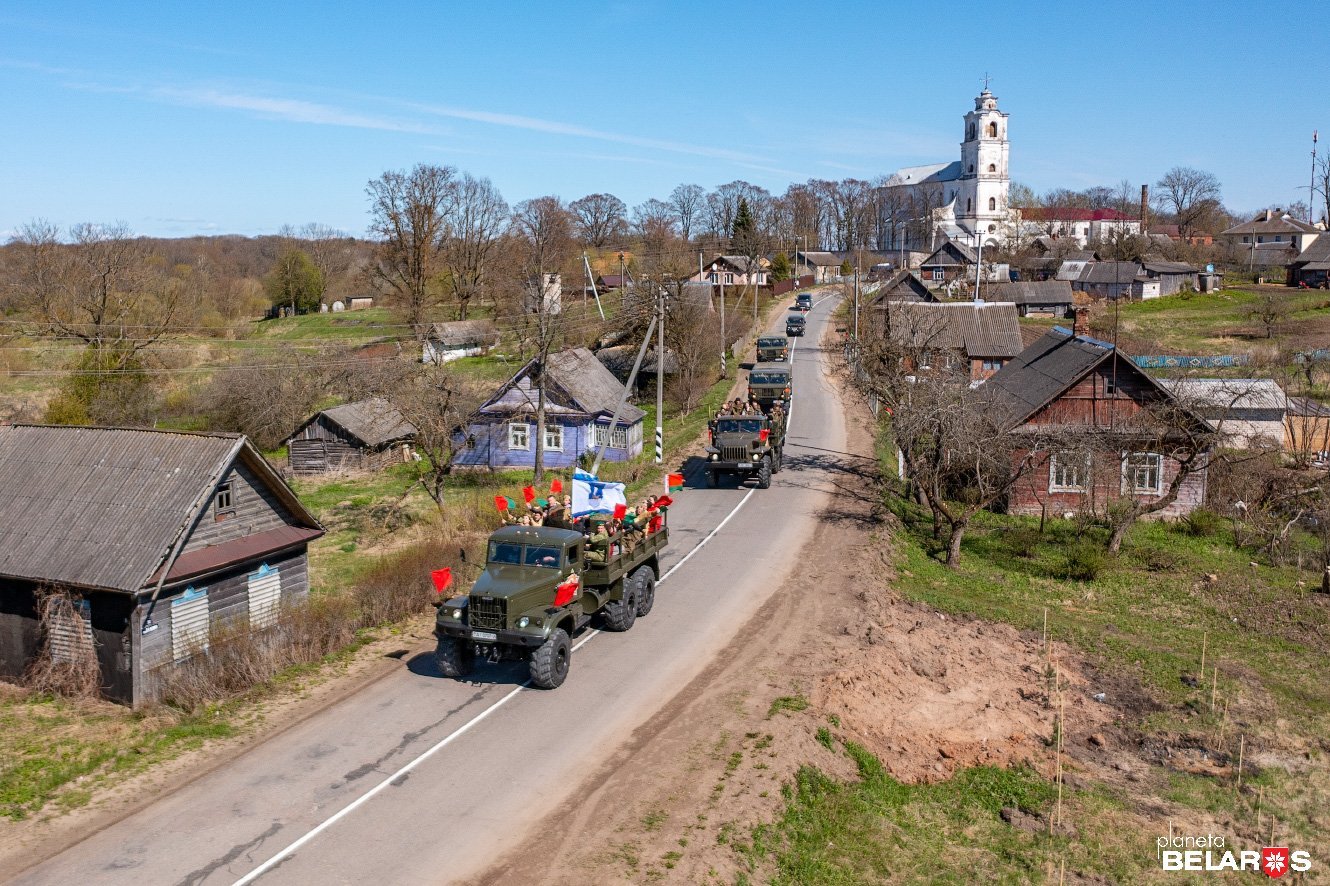 In fact, we came to the Braslav district to photograph the rally of "retro cars" (as we were promised). But since the event turned to be too political, we preferred to look for the real things that can attract tourists to these places. Together with the chairman of the Druyevsky village municipality, Mikhail Bakevich, we have developed a whole program to promote the town of Druya and attract travelers here. 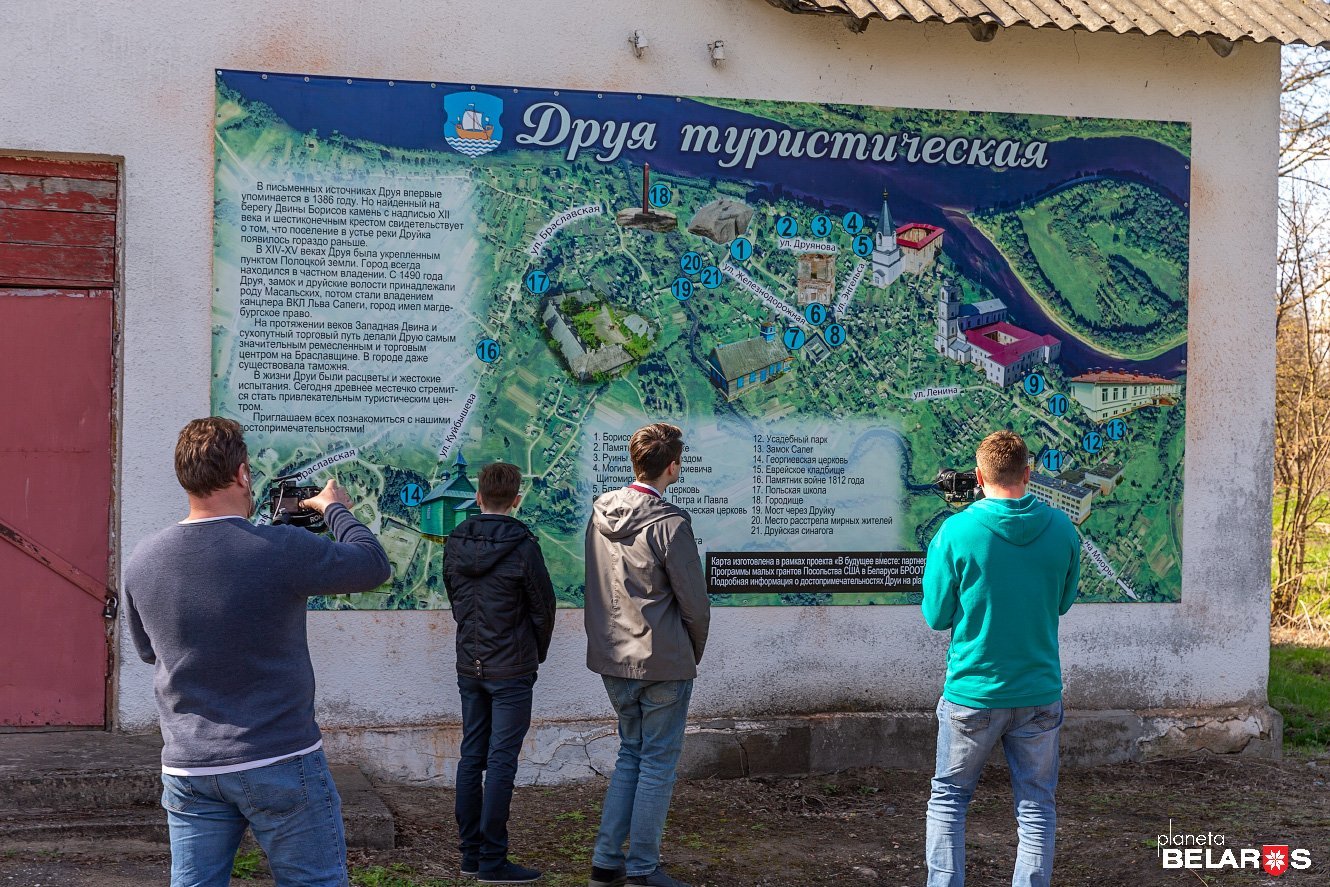 Not everything turns out as planned, but it's nice that our map of Druya attractions is in demand. 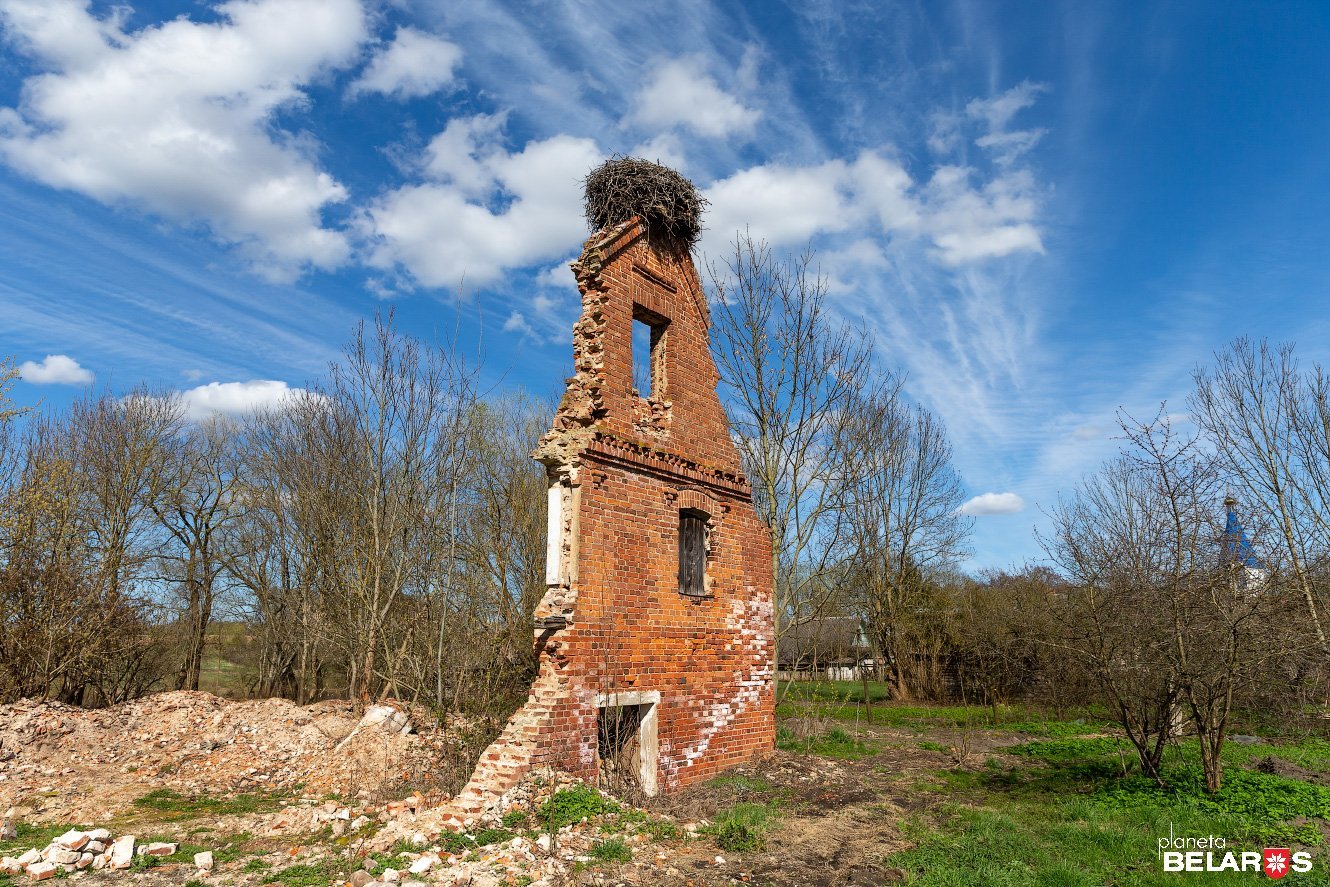 Empty village houses are being destroyed all over Belarus. And Mikhail Bakevich wants to preserve the aura of the former historical town. Thanks to the stork's nest, the facade of this house has also survived. If Bakevich succeeds in implementing his plans, we will turn several streets into a museum area, create a tourist information center, open a village museum and a photo gallery. It is quite possible that our descendants will find here not a wilderness, but a developed ethnic settlement. 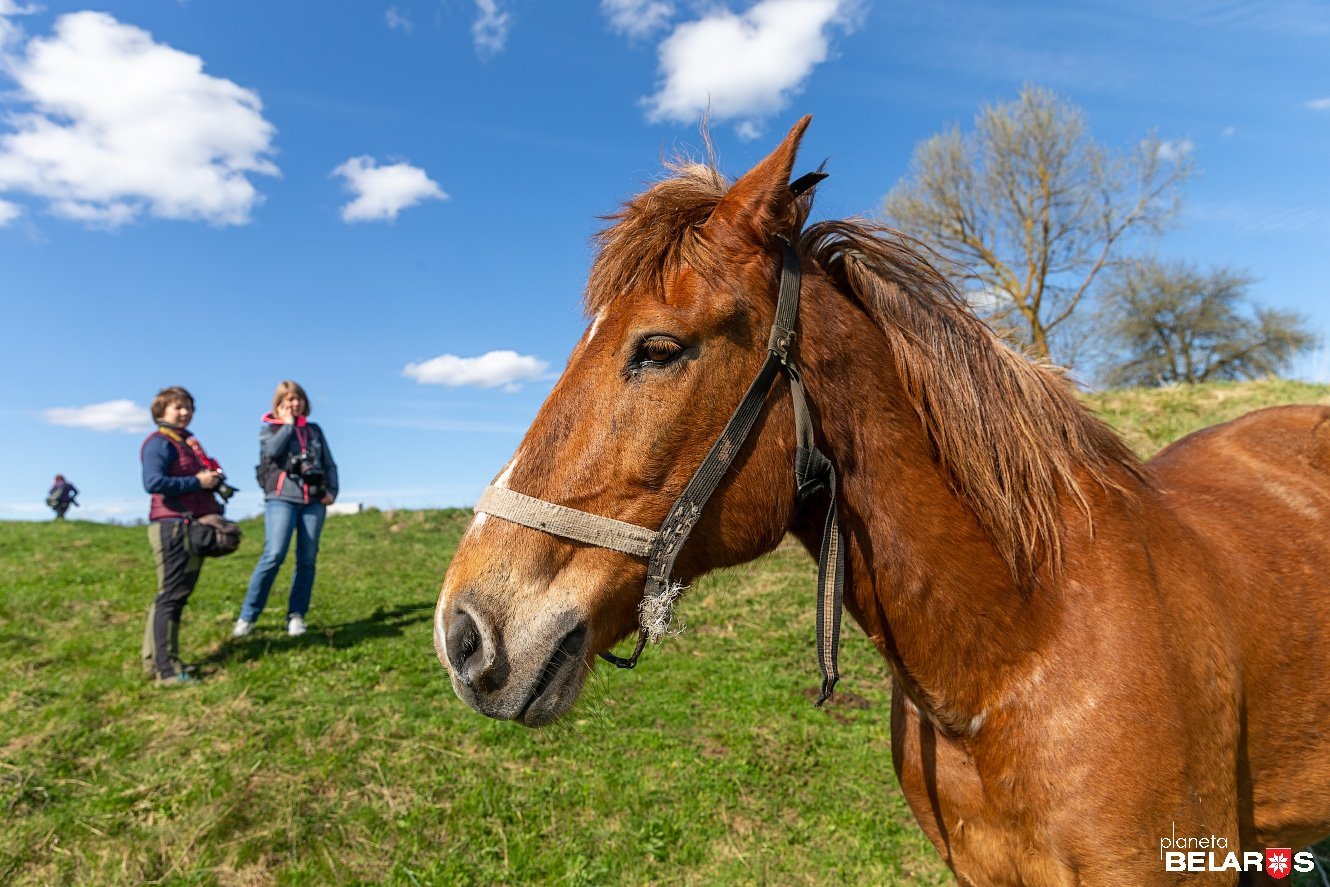 Photographers and a horse on an ancient hill fort. It offers a beautiful view of the Dvina and Druika rivers, the orthodox and catholic churches in the Latvian village of Piedruja. Here the canoeing route along the Druika River may end, and folk festivals may take place, buses with tourists should arrive here… 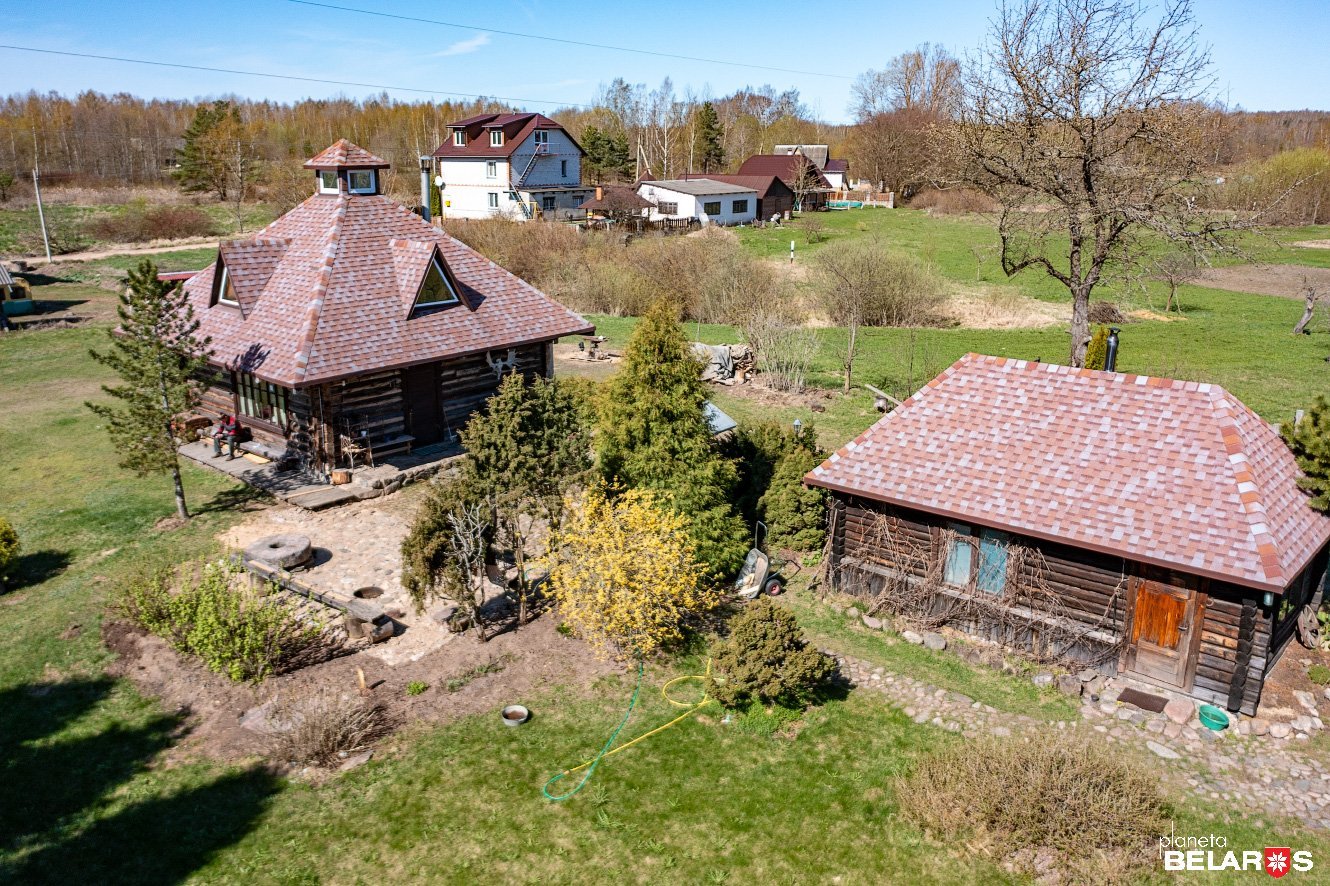 But all this will be in the future, and in the meantime, I'm testing new light filters, shooting the eco-barn "Nadberezhye" in different modes. The Saturday evening will be devoted to the moose. 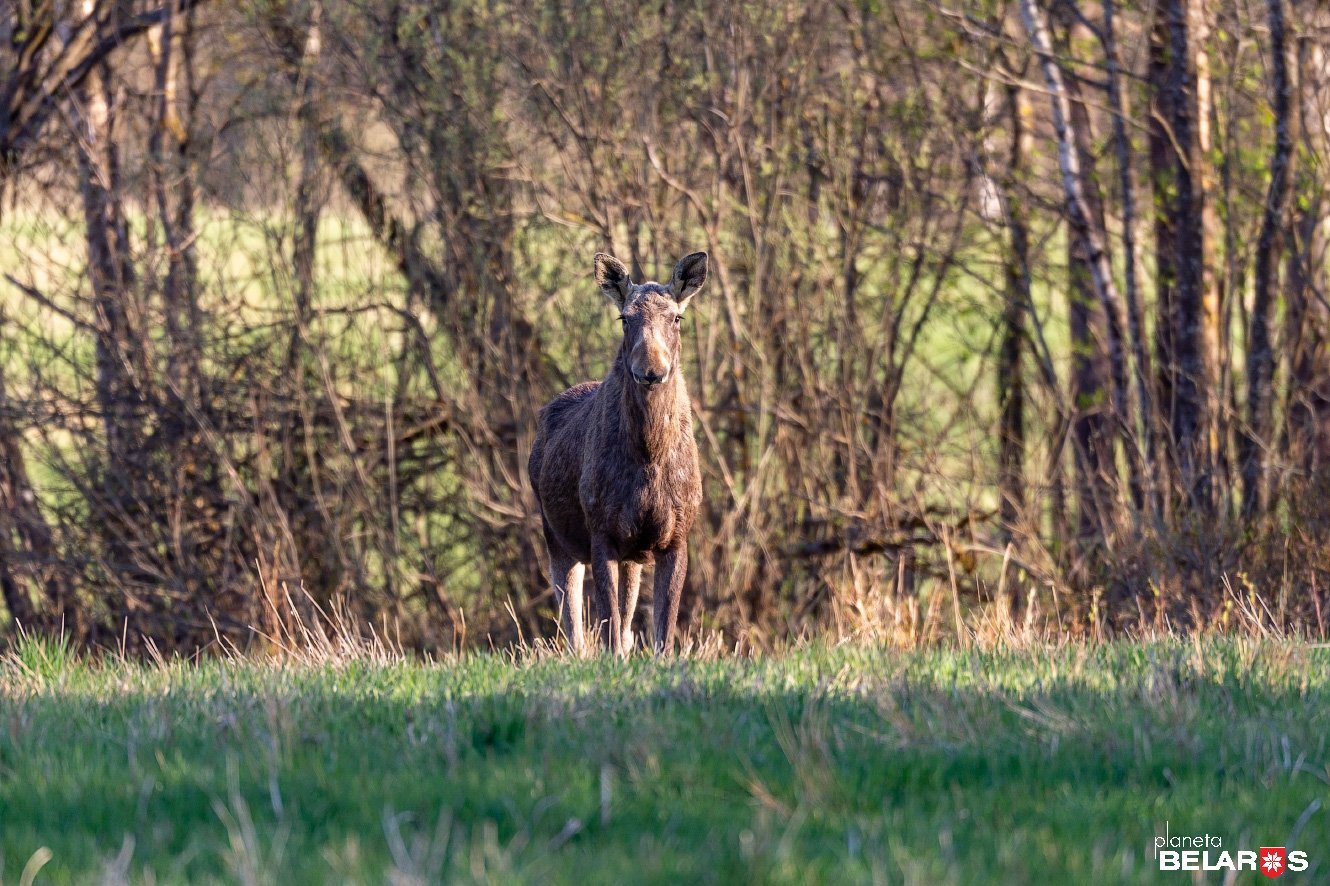 The Braslav – Vidzy asphalt road. The first photo trophy. Well, it's just a photo record. To get something more decent, you need to wait for the moose to start behaving naturally. Sometimes it’s necessary to  stand still for about twenty minutes. 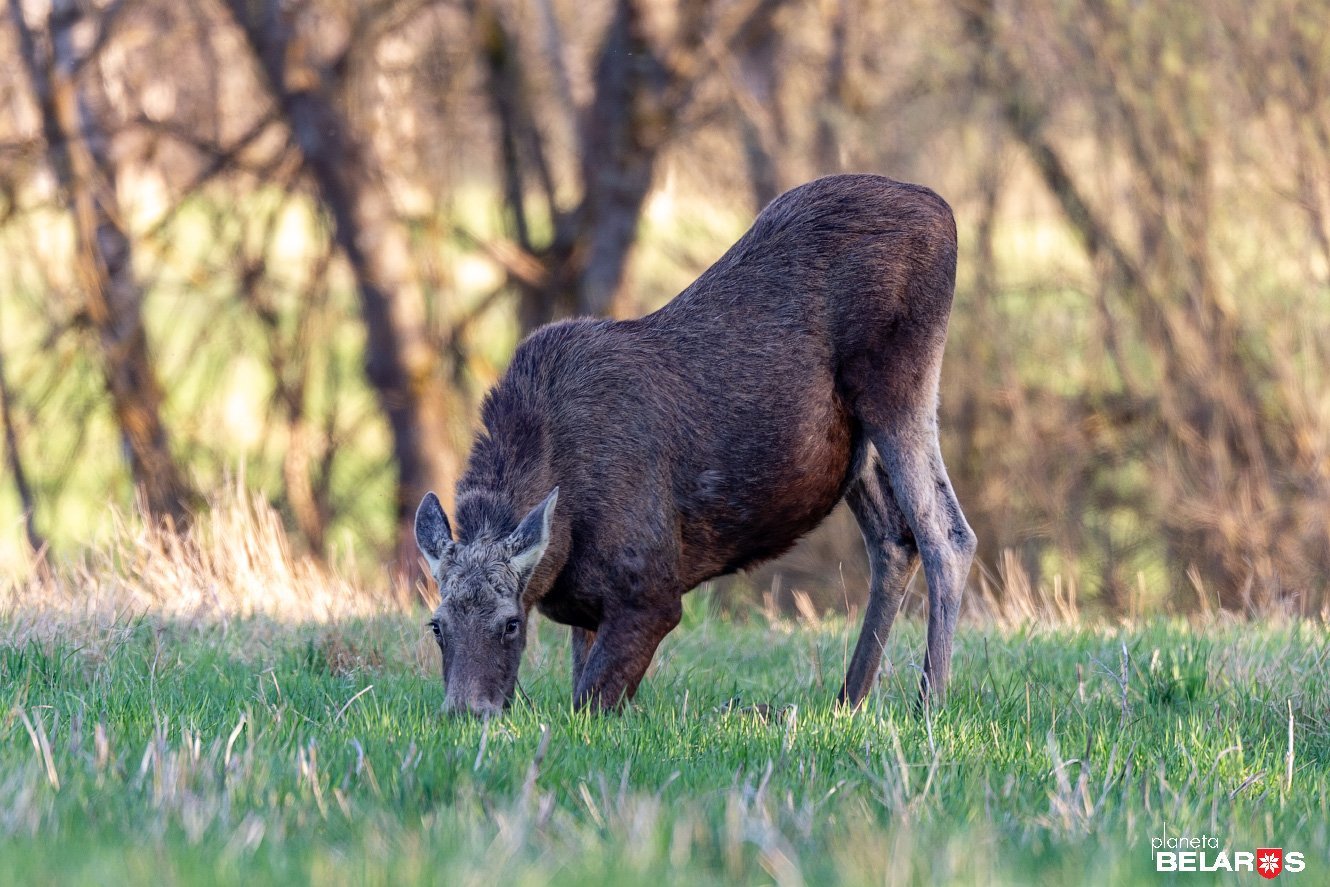 I'm lucky this time. The moose begins to feed. Have you seen how these animals behave at the dinner table?

Soon another moose appears. I wait until the animals are in the same frame. I see a wound above the front shoulder blade, but it seems that it does not really bother the moose anymore. 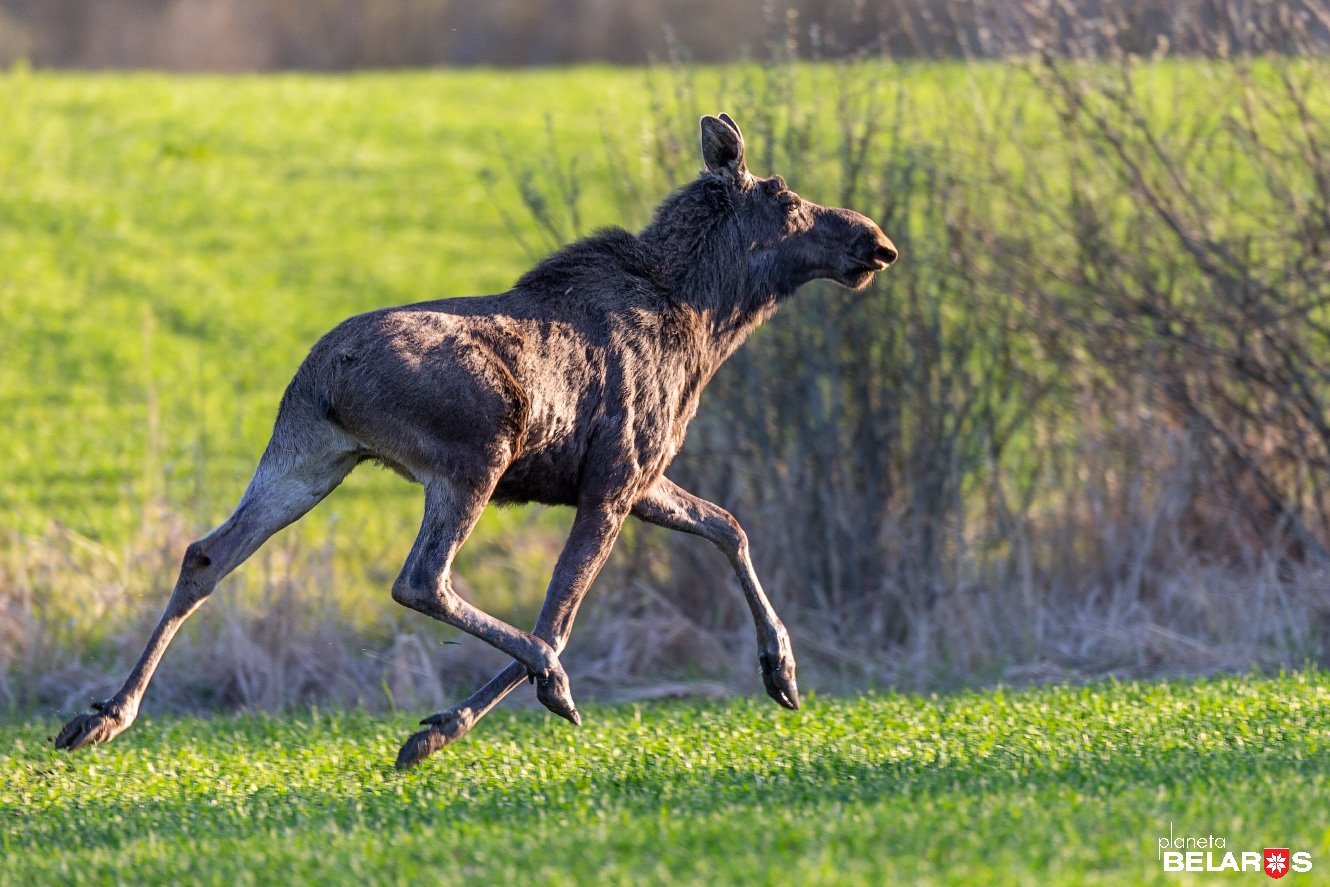 And this is another male. When he saw the car, he immediately ran, but in a very favorable way for me. It turned out to be a whole series of moose in motion.

I make a small circle on the country roads and return back to the Braslav-Vidzy highway. And I see a female moose right at the fringe of the forest. I stop the car, put the long-focus lens in a more comfortable position, and wait. Cars and trucks pass between us, but the moose-cow does not pay any attention to them. She is only looking in my direction. I'm sitting quietly in the car. 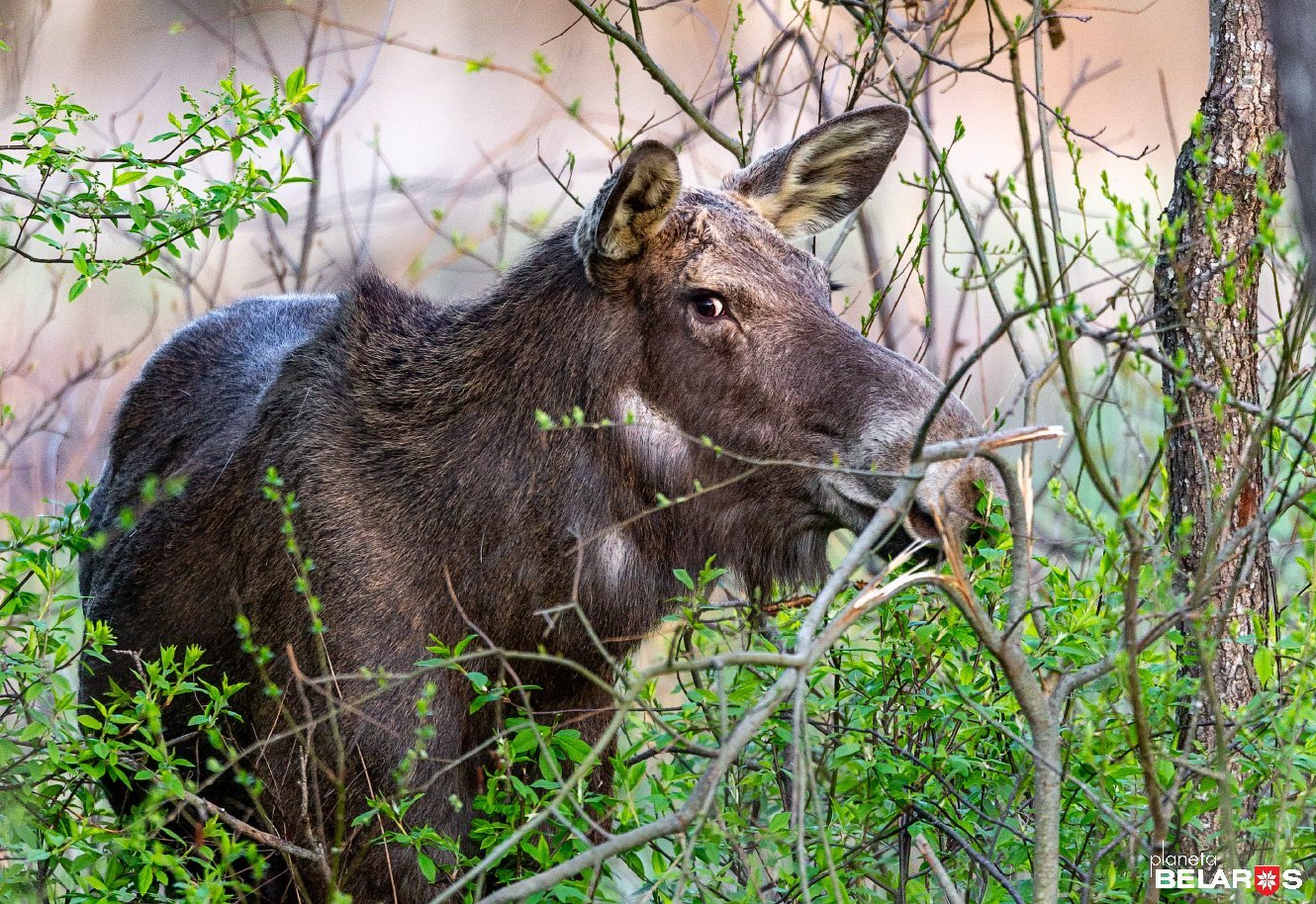 As a result, there is only this wary look with a broken branch in the foreground. The moose began to eat, but shifted half a meter to the side behind the nearest tree. It became impossible to shoot… 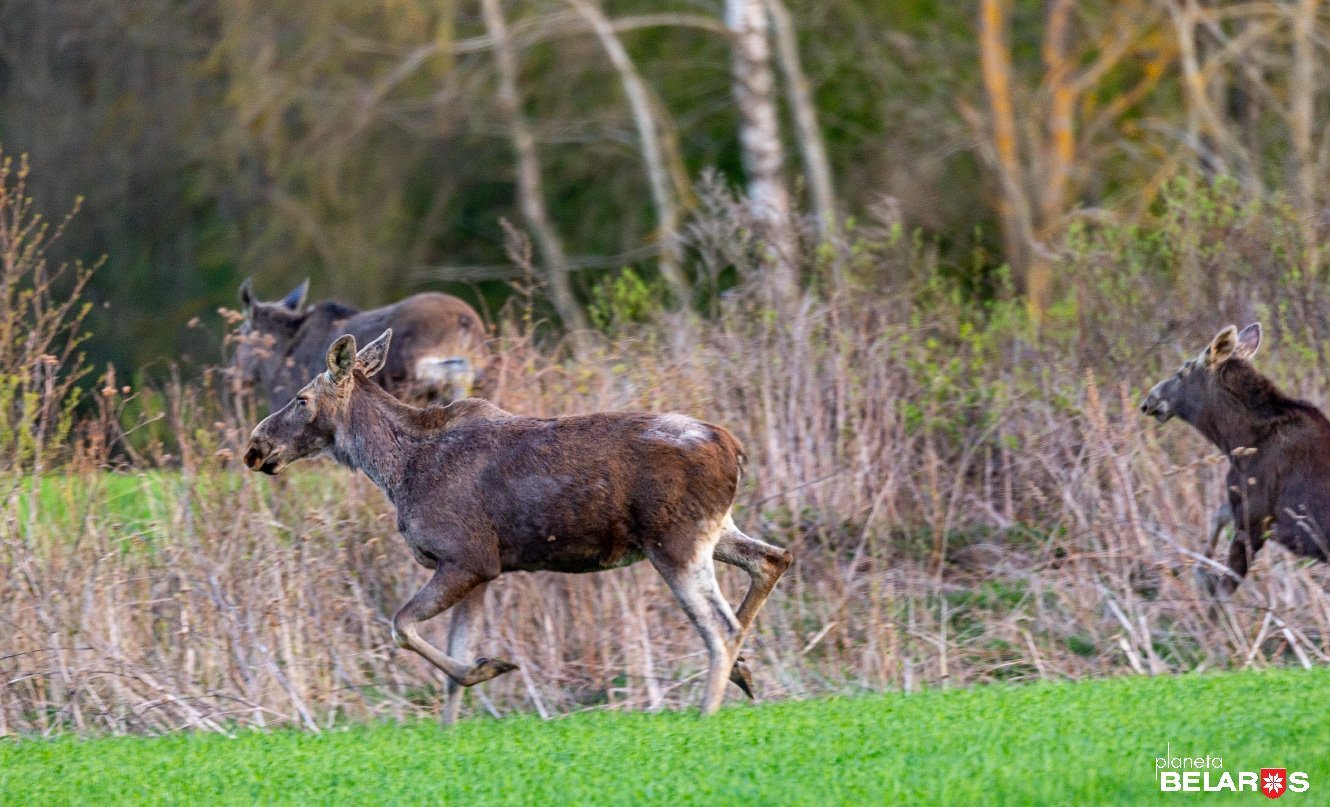 Three moose are on the field. I got closer and was about eighty meters away from them before they started running. 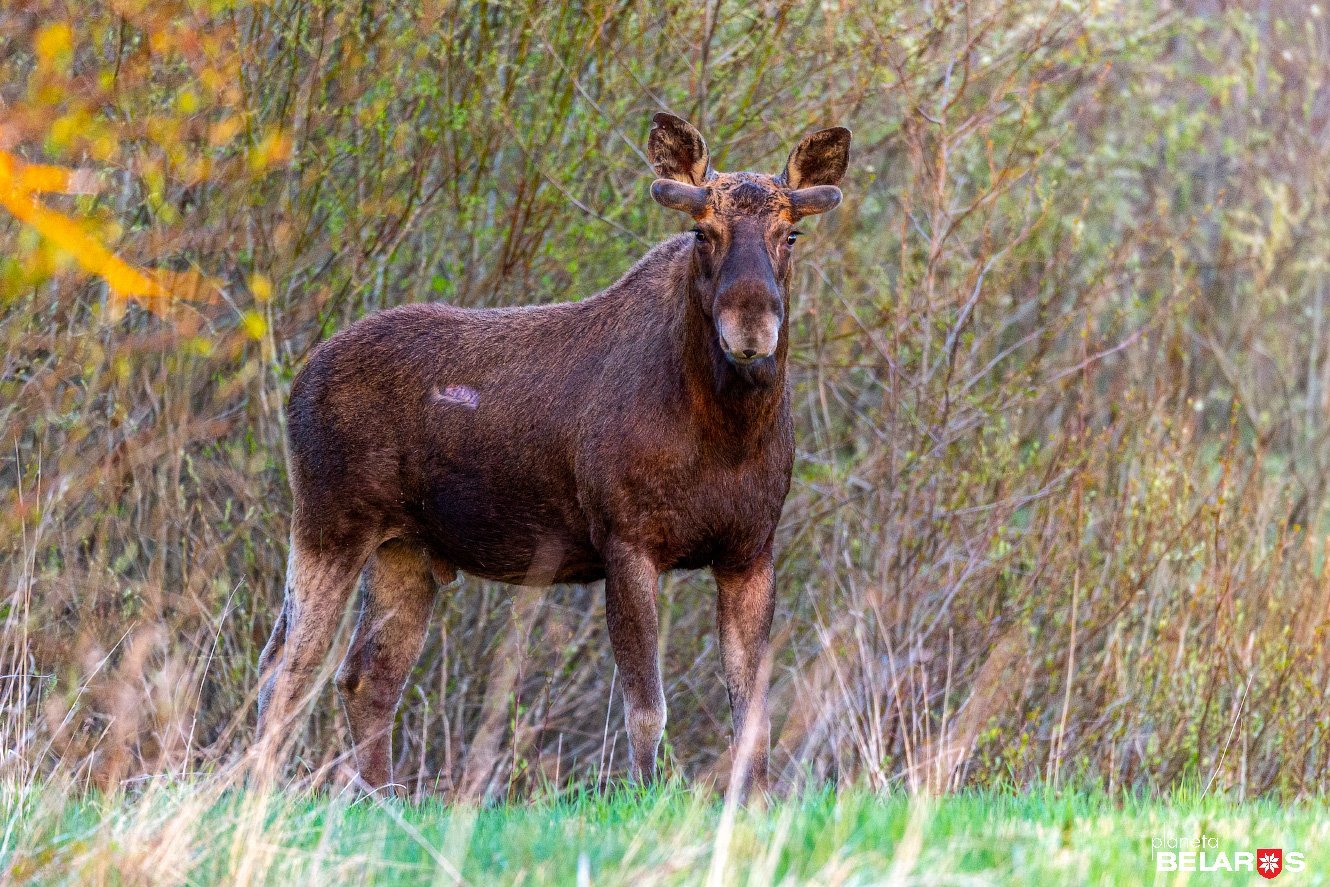 And this male was clearly not in the mood to give up his field to anyone. I was approaching him quietly, and he stood staring at me. 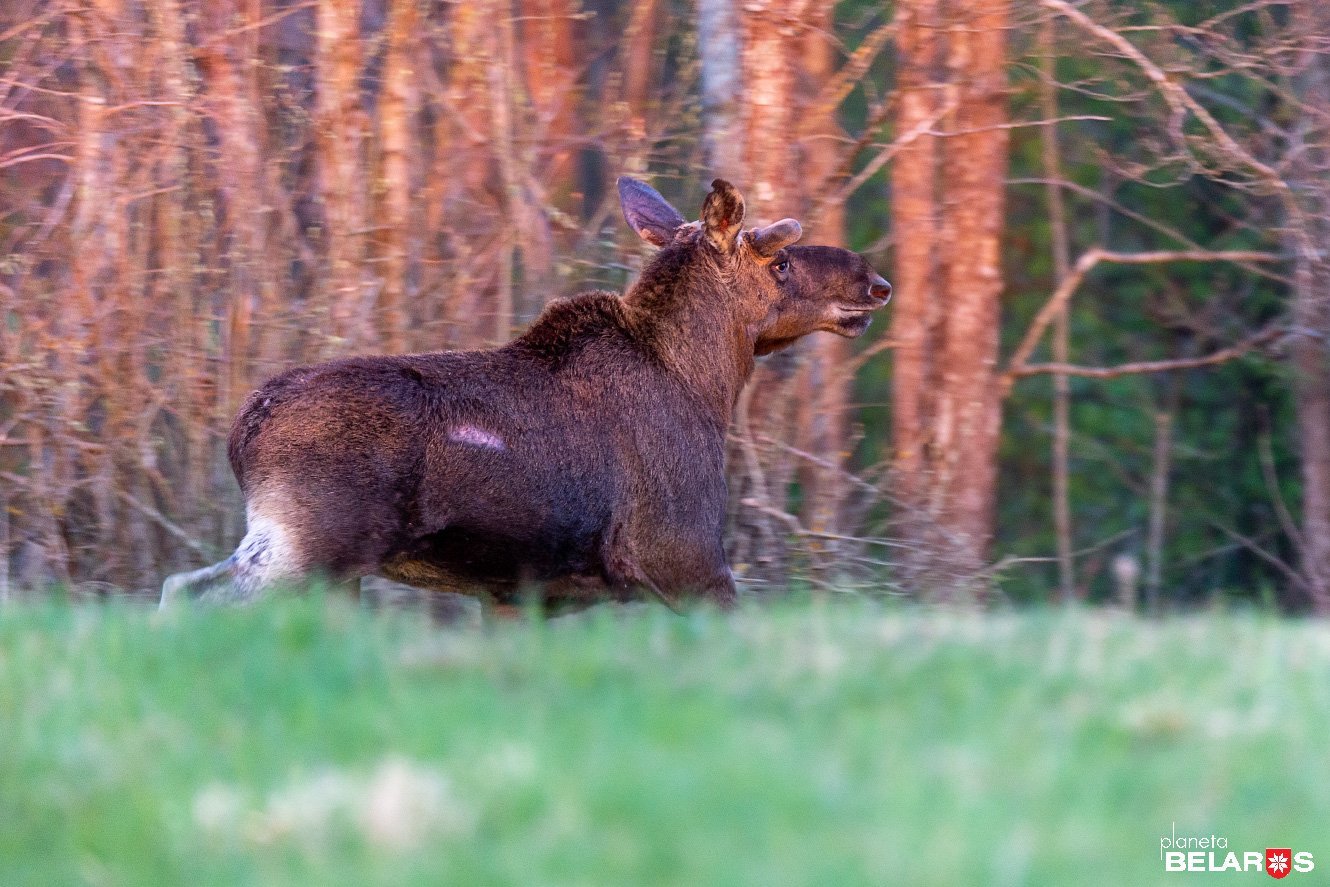 Then he ran back about fifty meters and stopped again. And not just stopped, but took a few steps in my direction, making very unhappy noises. To be honest, at that moment I thought that, probably, after all, it is not worth the risk. Of course, this is not the time for rut now, but who knows what ideas and emotions he has in his half-horned head? 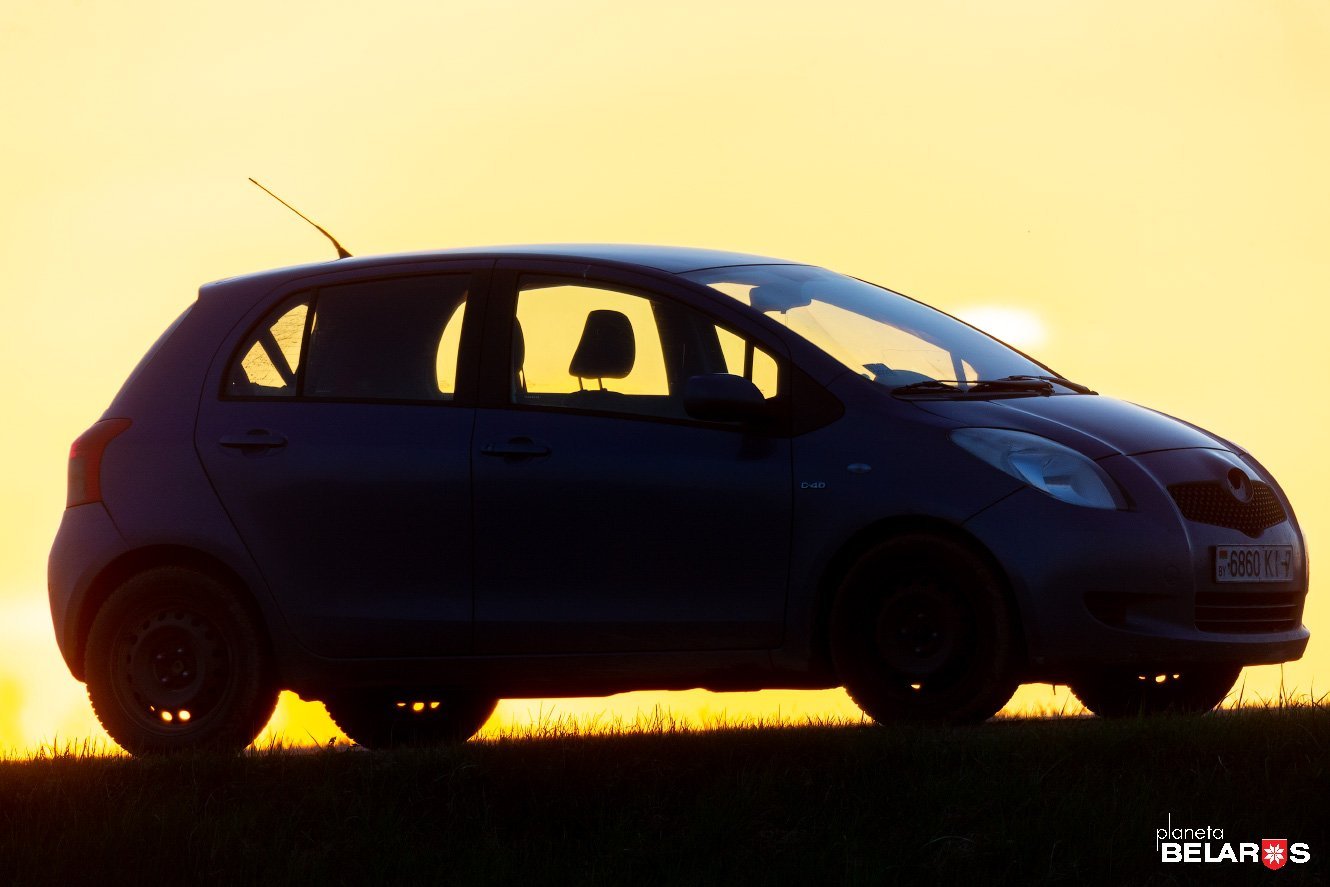 My wife's car was parked on the side of the road, the sun was setting, and my photo-hunting day was ending. Eighteen moose in two and a half hours is a good result even for the Braslav district.

The next day we plan a photo shooting trip to the north of the Polotsk district. On the way, I stopped by my old friend: the hedgehog and the dragon. 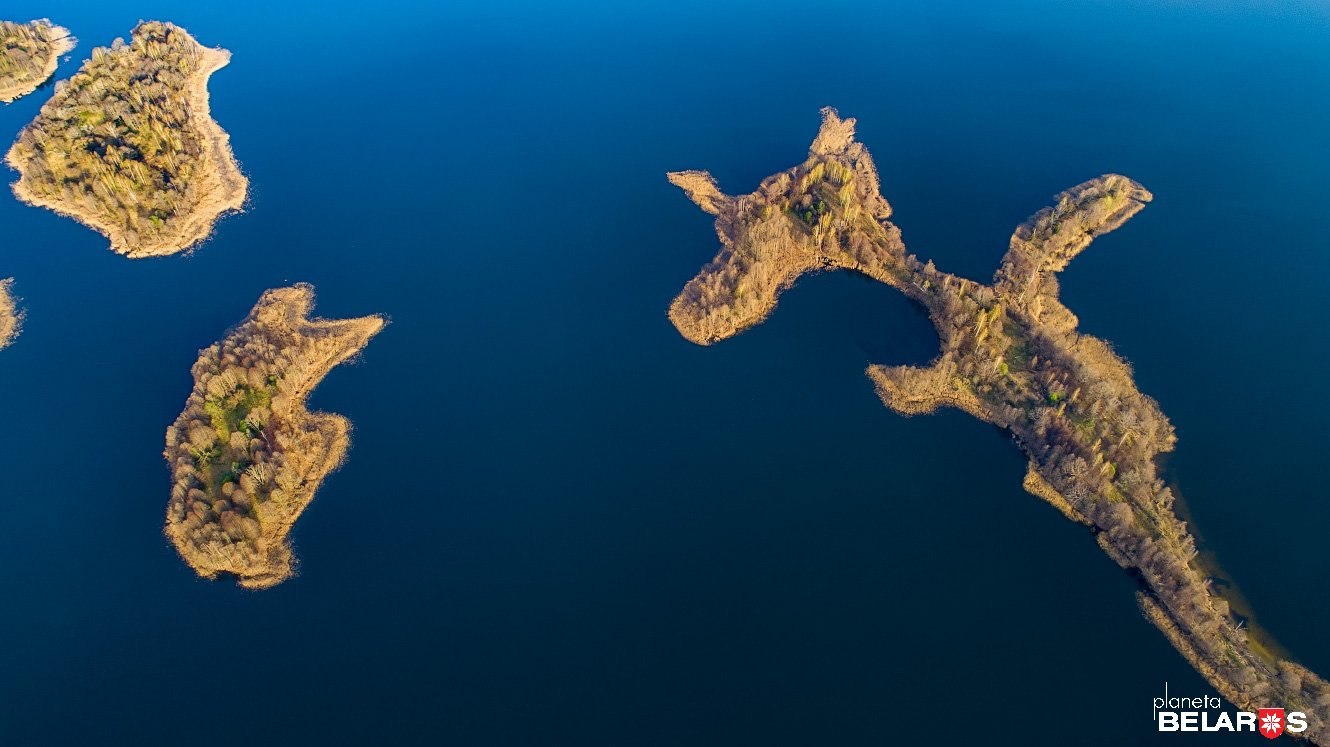 They were still having a nice discussion. Probably, they were talking about having all these problems ended up, and having foreign tourists visiting the Braslav district…