Thirty-four years have passed since the accident at the Chernobyl nuclear power plant. In Ukraine, Belarus, and Russia people have left vast territories. But nature keeps living its own special life there.

A couple of months ago I was shooting the today’s Belarusian villages in the Polesie Radiation Reserve. Now I’ve finally reached the archived photos taken on that trip, thus I decided to share pictures of the real Chernobyl wilds. 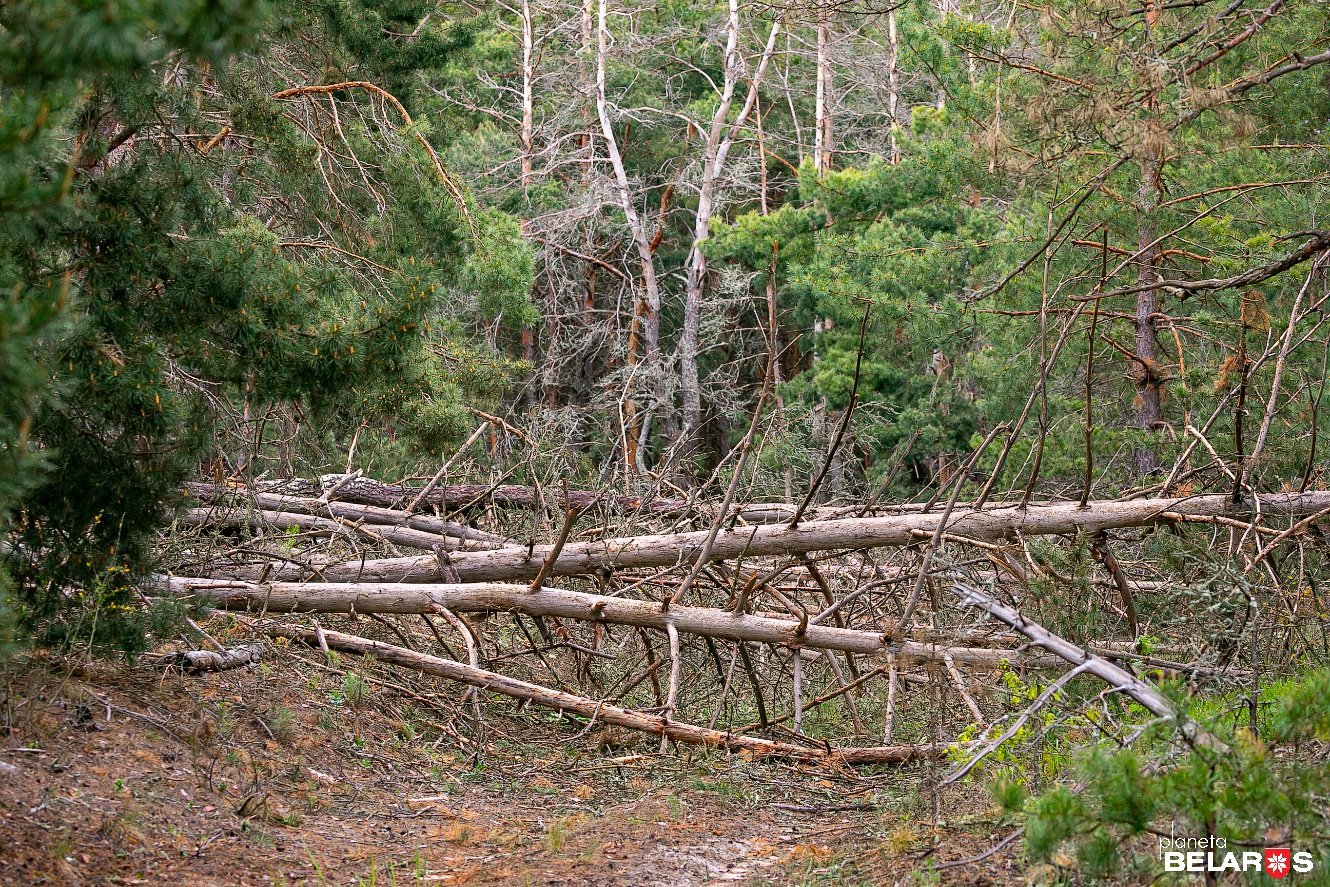 This is what some former forest roads look like.

There is no economic activity in the reserve. The reserve’s employees ' task is to protect the contaminated territory, to conduct scientific researches, and to take the fire prevention measures.

Therefore, old trees (by the way, they are not too numerous in the local forests) are just slowly dying…

This is a real find for a wildlife photographer. 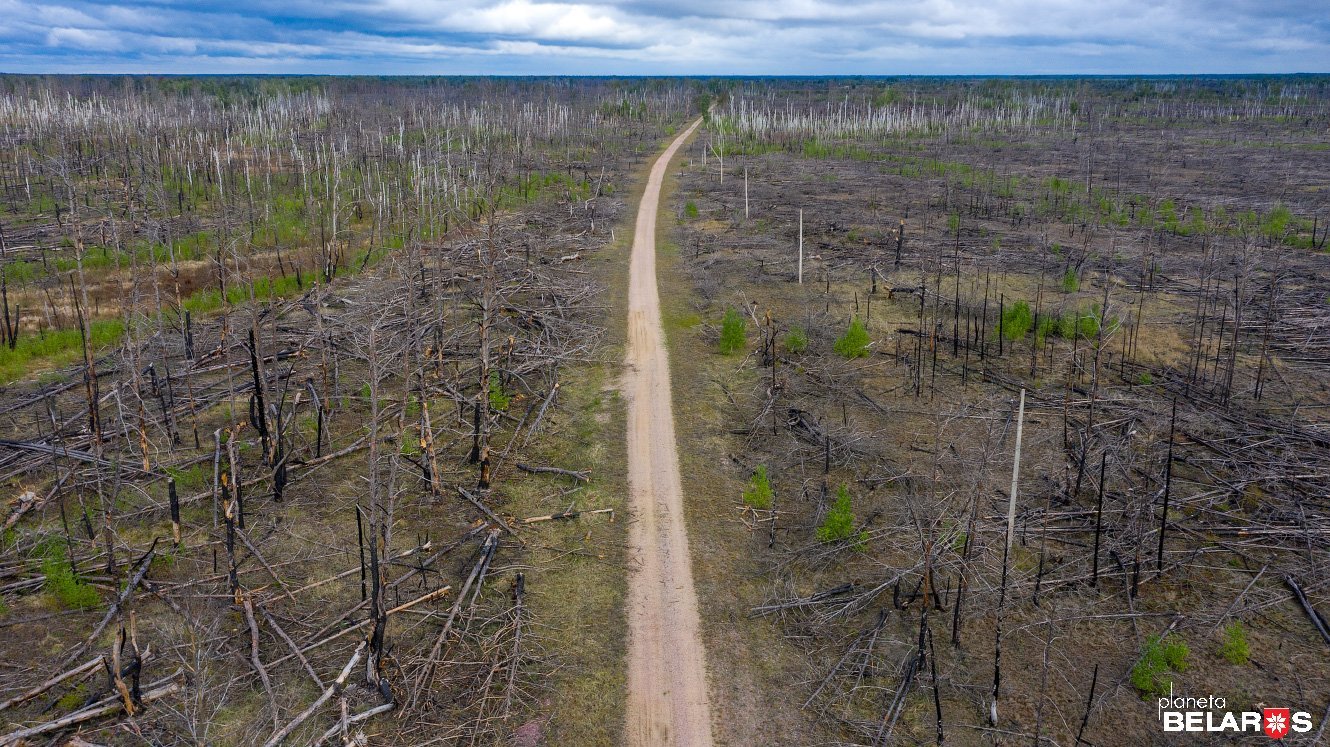 Unfortunately, despite all the efforts of the reserve's employees, it is not possible to avoid fires. That’s how the road from Dronky to Kozhushky looks like from height. Many villages aren’t mapped now on the Yandex and Google maps, but we're trying to preserve the memory of them, so "Planet of Belarus" will have the tracts where the resettled villages used to exist marked and described.

The remains of the village of Kozhushky. Over the course of thirty-four years it has been burned several times.

Former pine forest near the village after a crown fire. 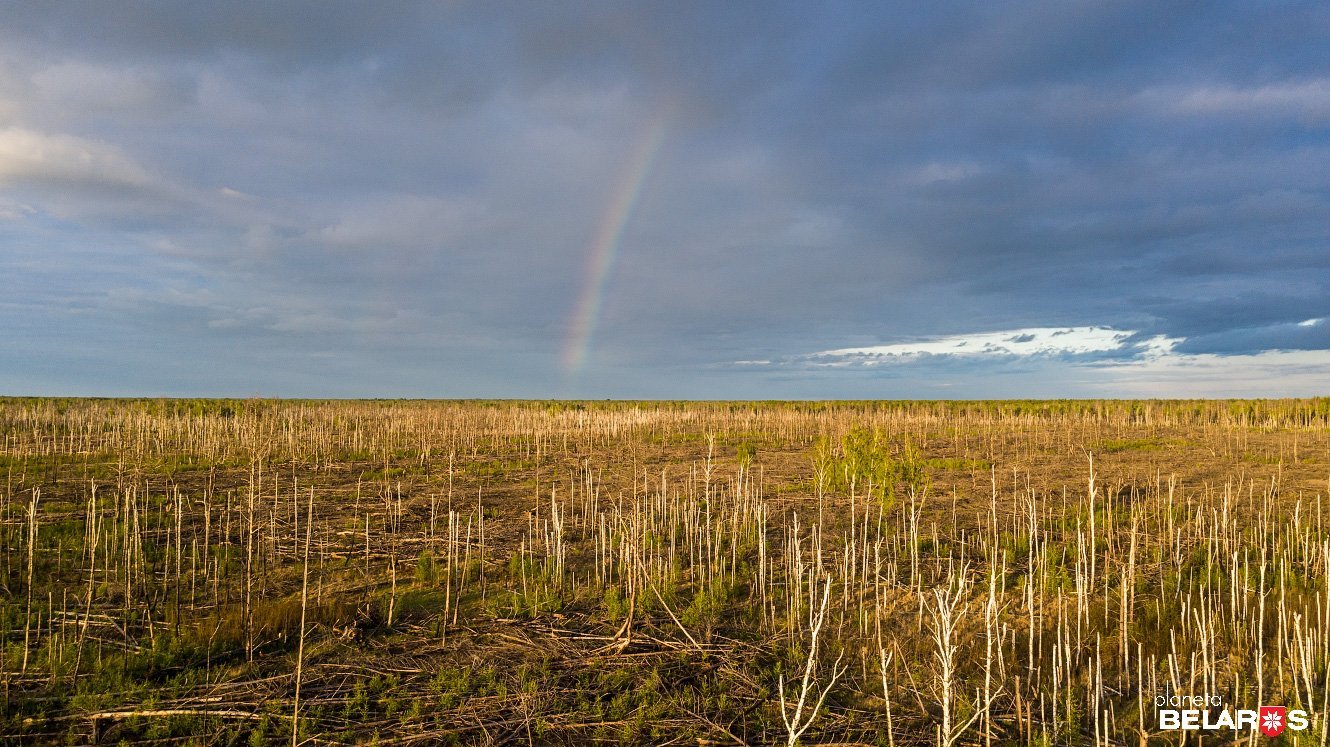 It had just rained and a rainbow appeared in the sky. The picture of the fallen forest became a little more joyful, did it?

This is also the result of a crown fire. For several years after that the trees were staying dry, then their roots began to rot, and the forest turned into an impenetrable windbreak under the influence of the wind. In Belarus you can only see this in the Chernobyl zone. In all other regions the forestry workers immediately sort out the forest debris after fires and windfalls.

The most interesting thing is that during the shooting I noticed a female deer, which, according to Valery Dombrovsky, a researcher at the reserve, had come here to calve. It's amazing, but she could jump somehow among these fallen trunks, unfortunately I was not in time to record this process. 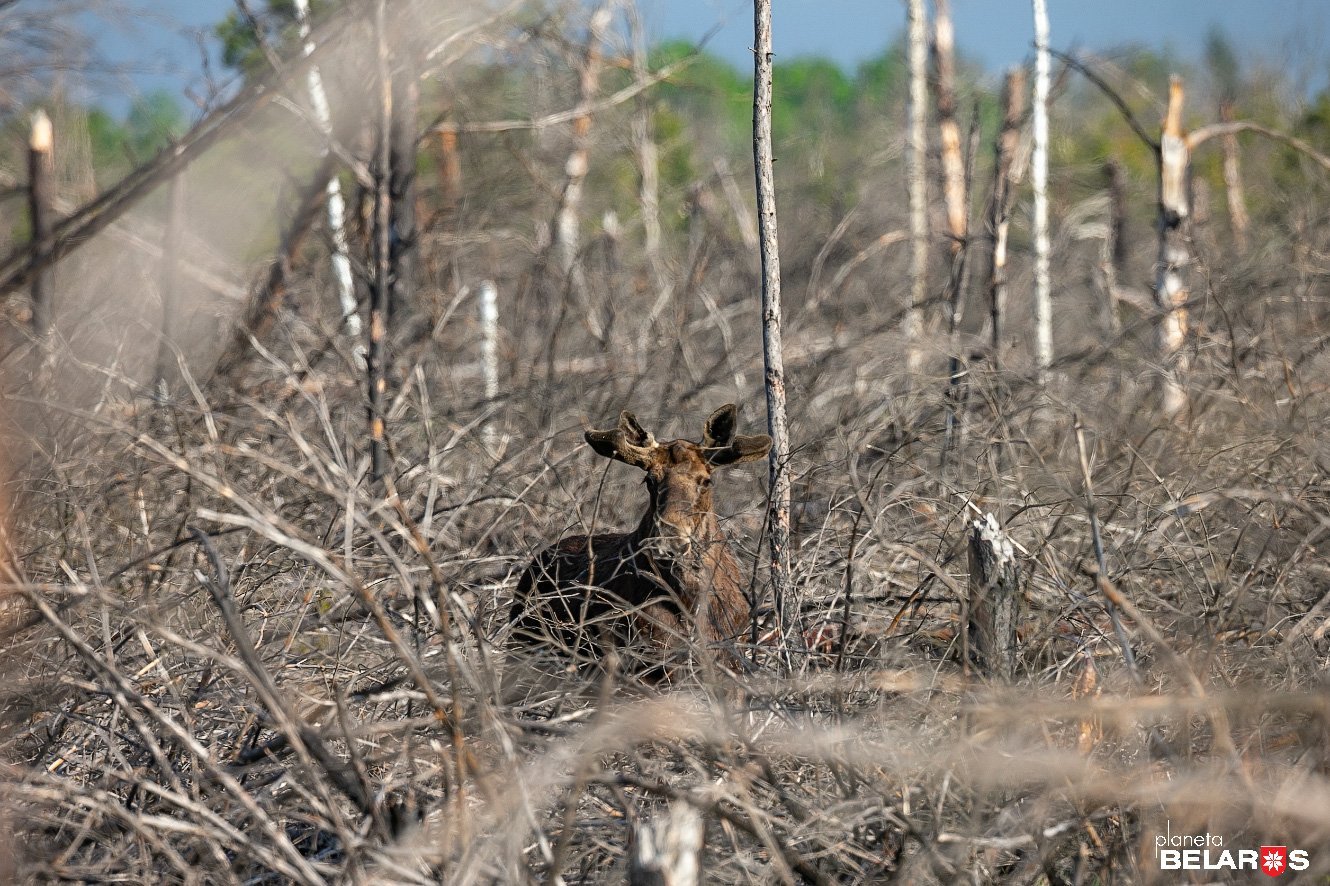 But on the other fire I managed to photograph a moose with the new horns. There were two of them, but the shooting was hindered by standing dry trees. I raised the quadcopter, but the moose began to run away, and I couldn't make a decent shot.

However, I was able to record how the burned forest is being restored. Birch trees are the first ones to occupy the territory – their seeds are the lightest, and can travel long distances.

Former villages are also becoming a part of the Chernobyl wilderness. 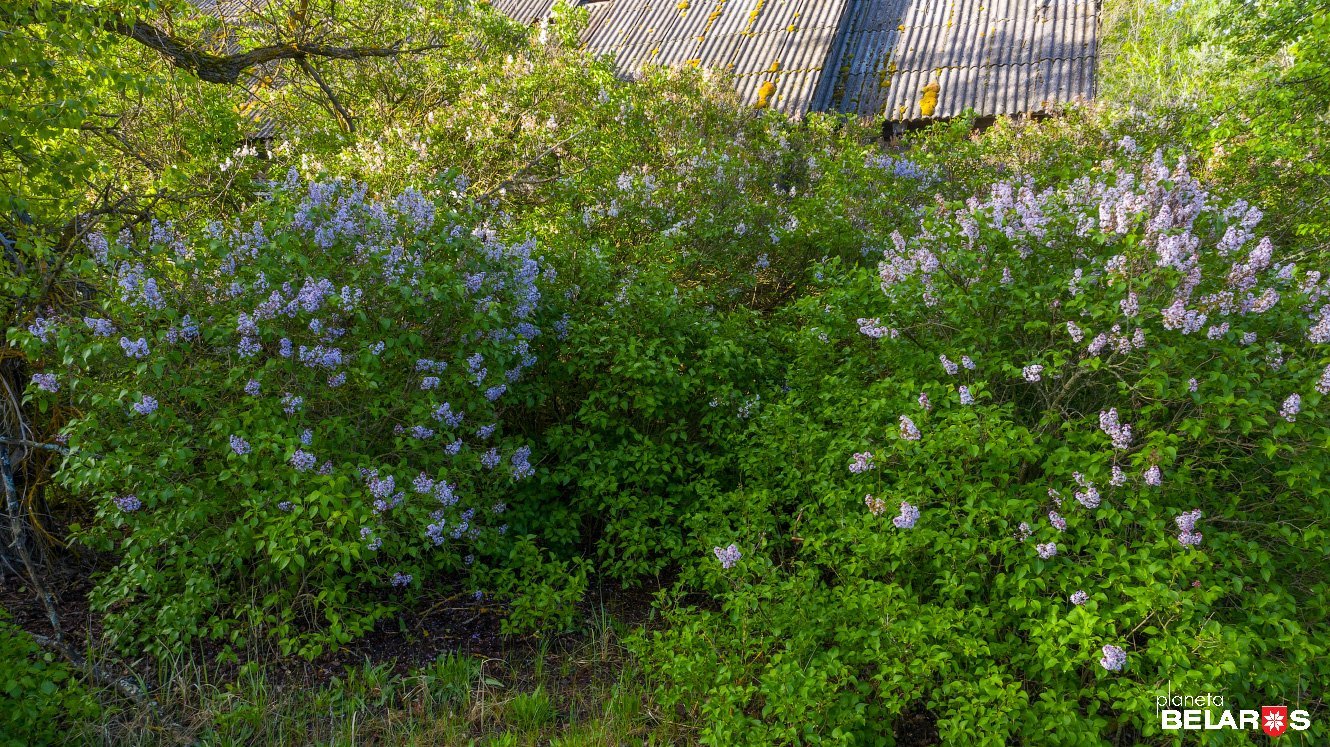 Is it exciting to see a forest of lilacs? 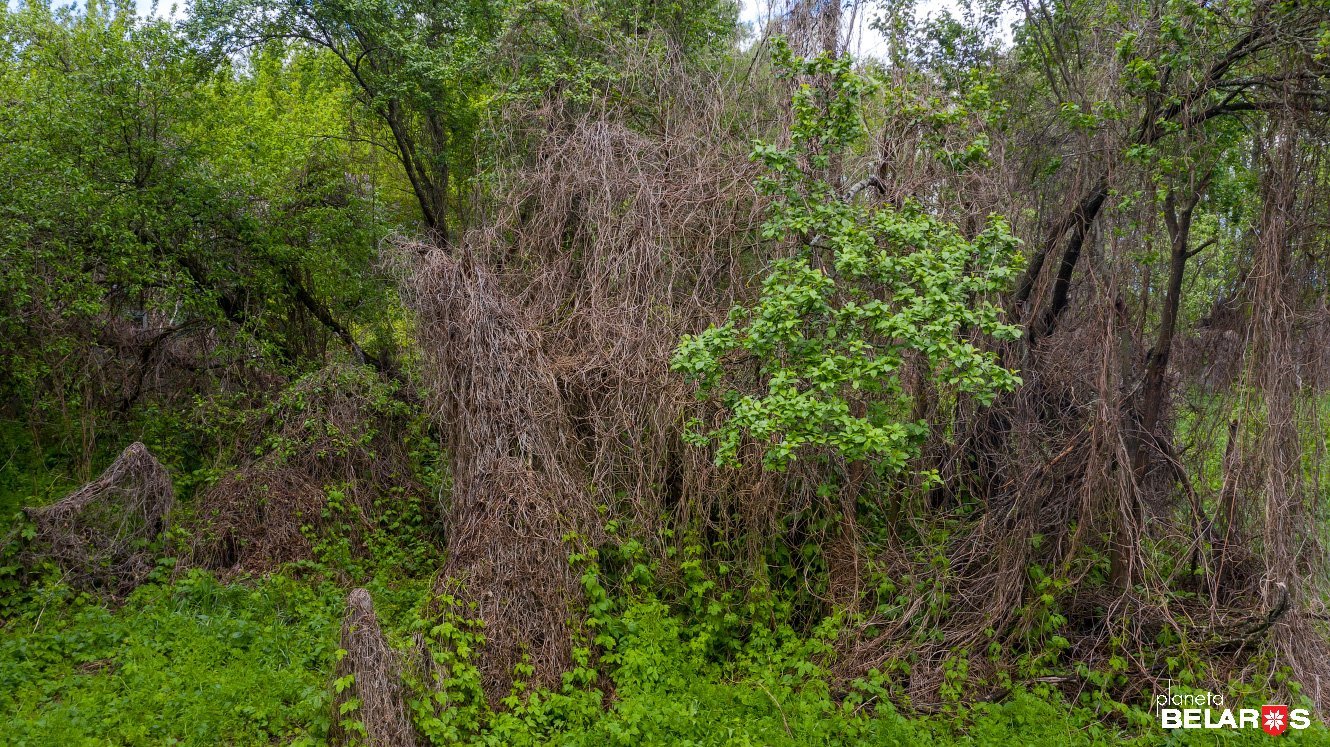 This is the Virginia Creeper (Parthenocíssus quinquefolia) that captured the garden trees. I hope to go to the reserve again in the autumn: that’s the time one can make real masterpieces of wildlife photography! 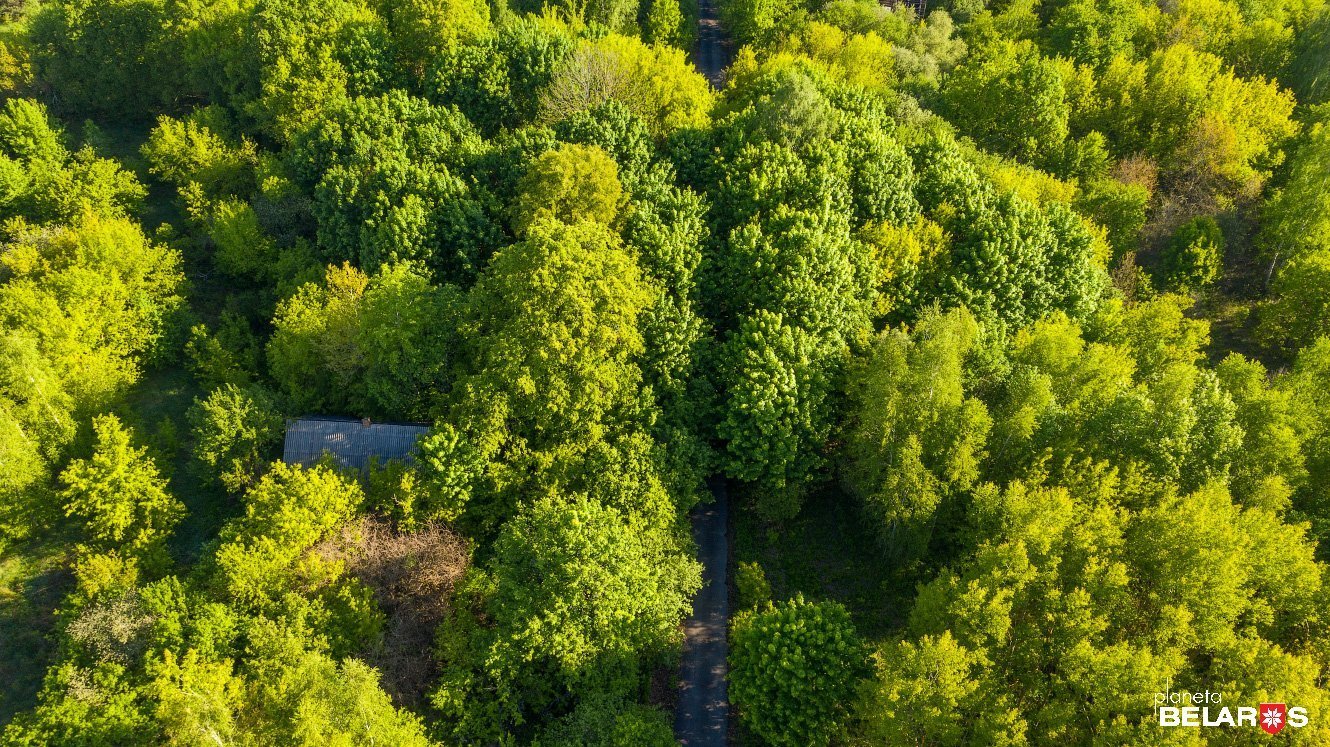 As a result, it is impossible to shoot houses from the ground, but one can only see pieces of roofs from the height. 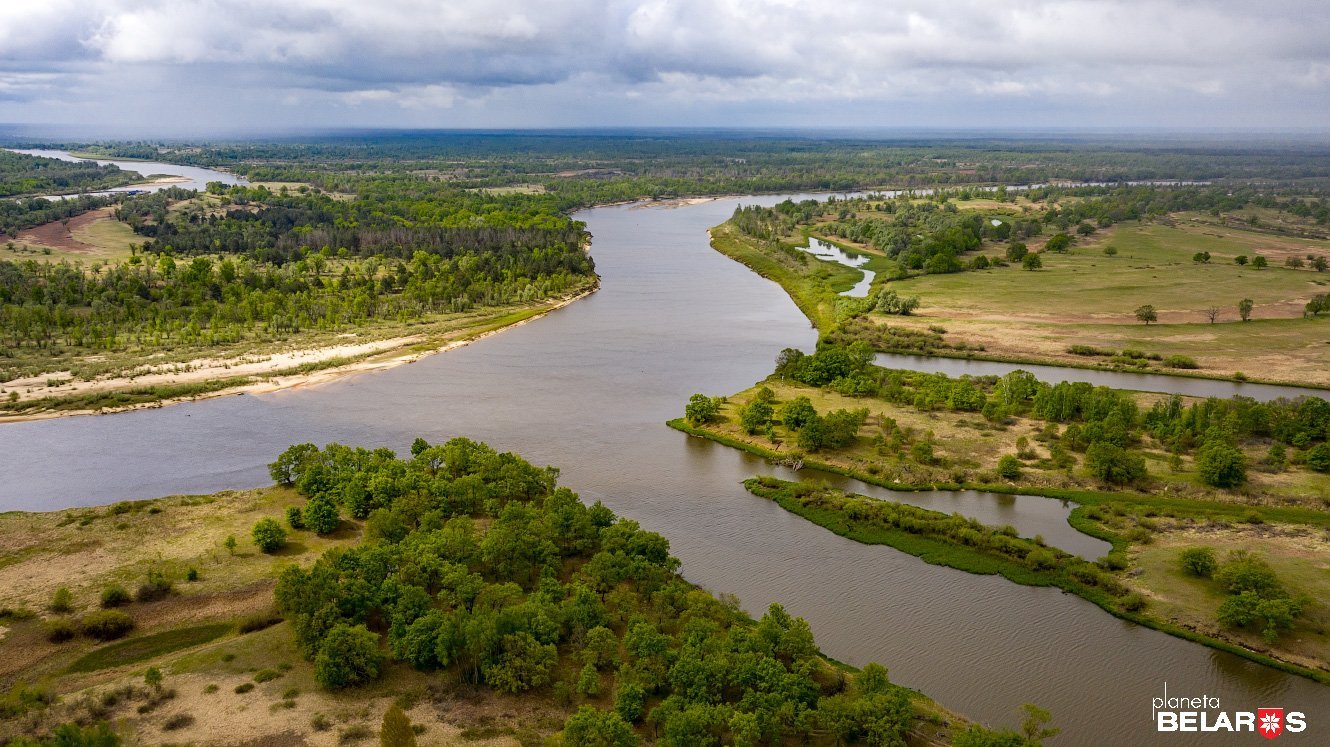 There are spots of the reserve that were not affected by the Chernobyl accident in any way, and they have preserved their original appearance. One of them is the Golden Horn (Zolotoy Rog) tract. This is a patch of floodplain oak trees on the bank of the Pripyat River and one of the old river beds. 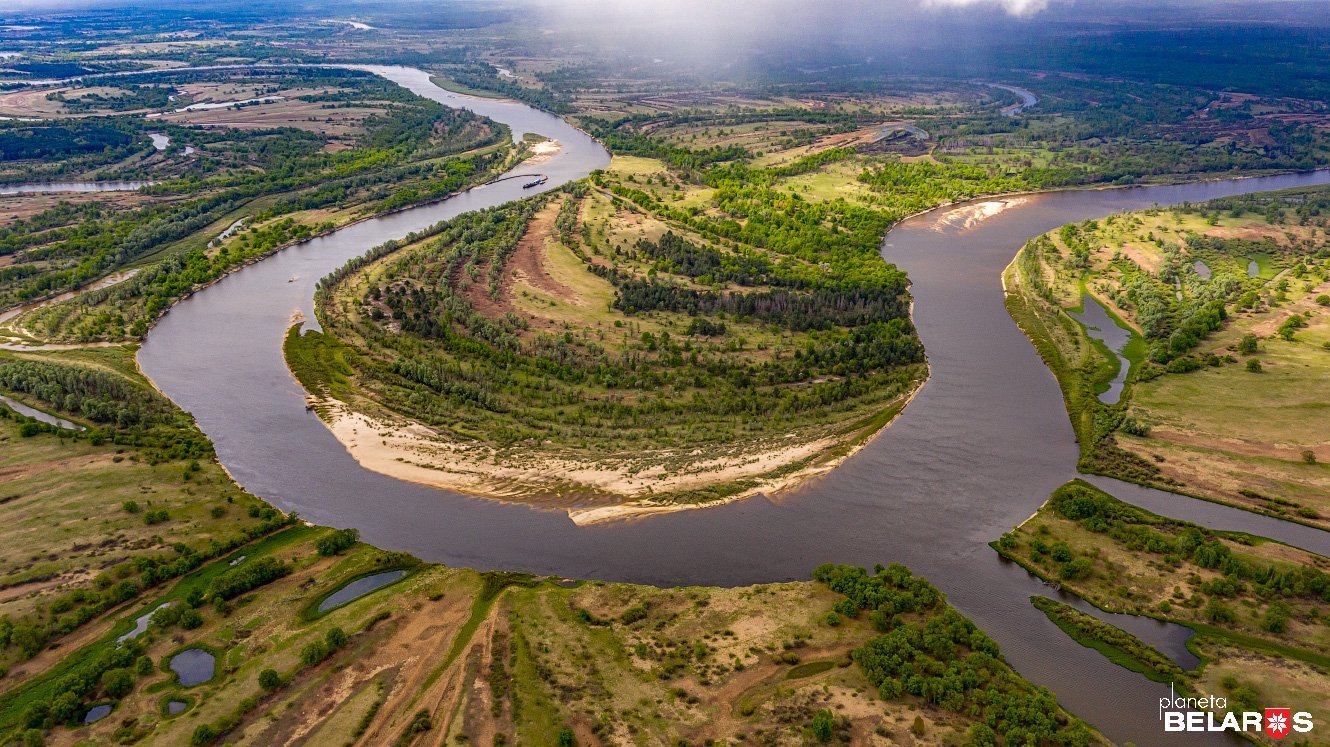 This is an amazing view of the Pripyat River in this place. The Golden Horn tract is in the lower right corner of the image.

It is famous not only for its unusual oaks, but also for a huge plantation of lilies of the valley.

If you try, you can make really unusual shots picturing the oaks and lilies-of-the-valley. 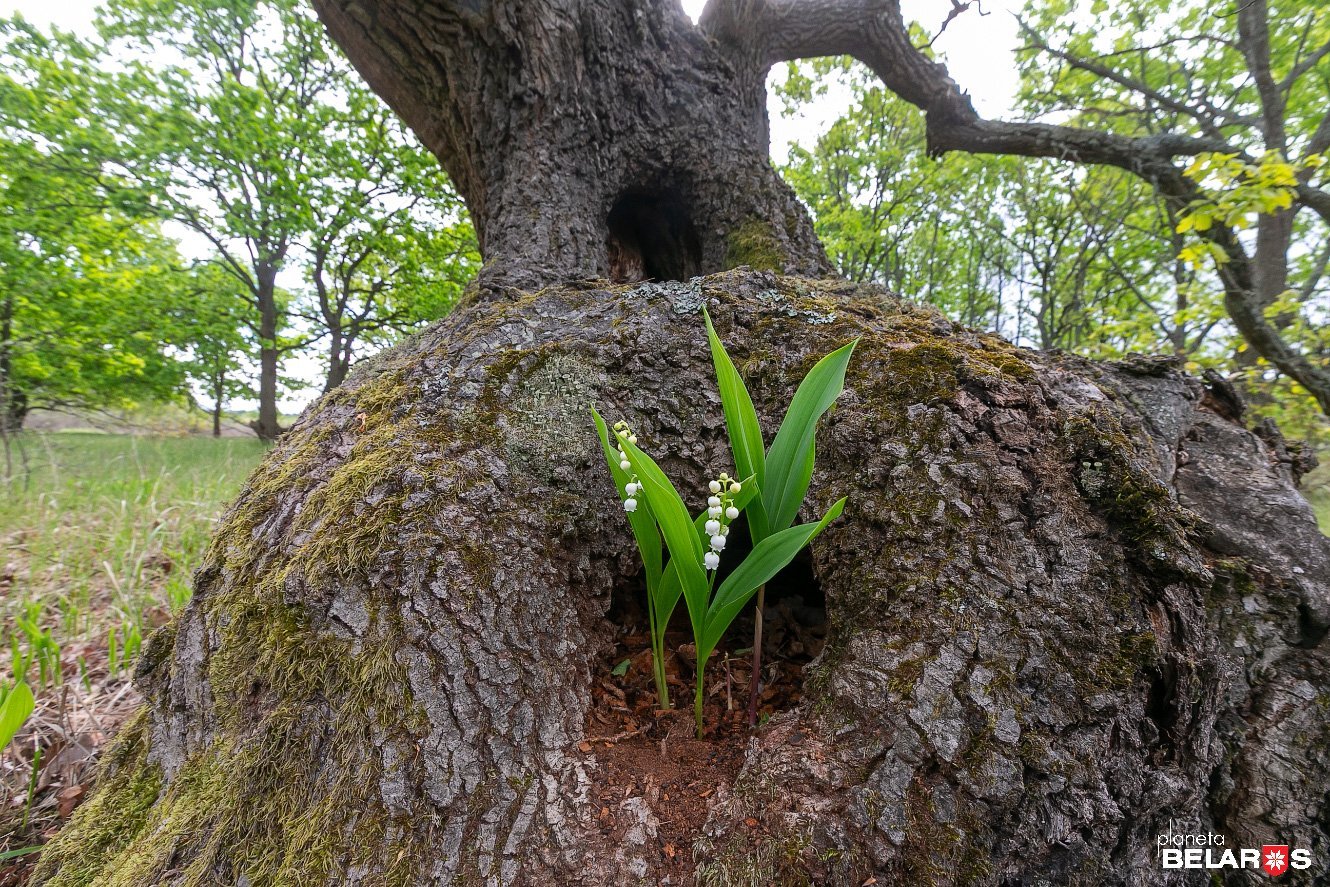 This one I called "Flowers of hope". We were lucky to be in the Golden Horn when lilies-of-the-valley were starting blooming. In the sunny places they were already rampant, but in the shade their white bells had not opened yet. These three flowers occurred to be lifted up into the hollow of an old crooked oak, that’s why they began to blossom together with the leaders. 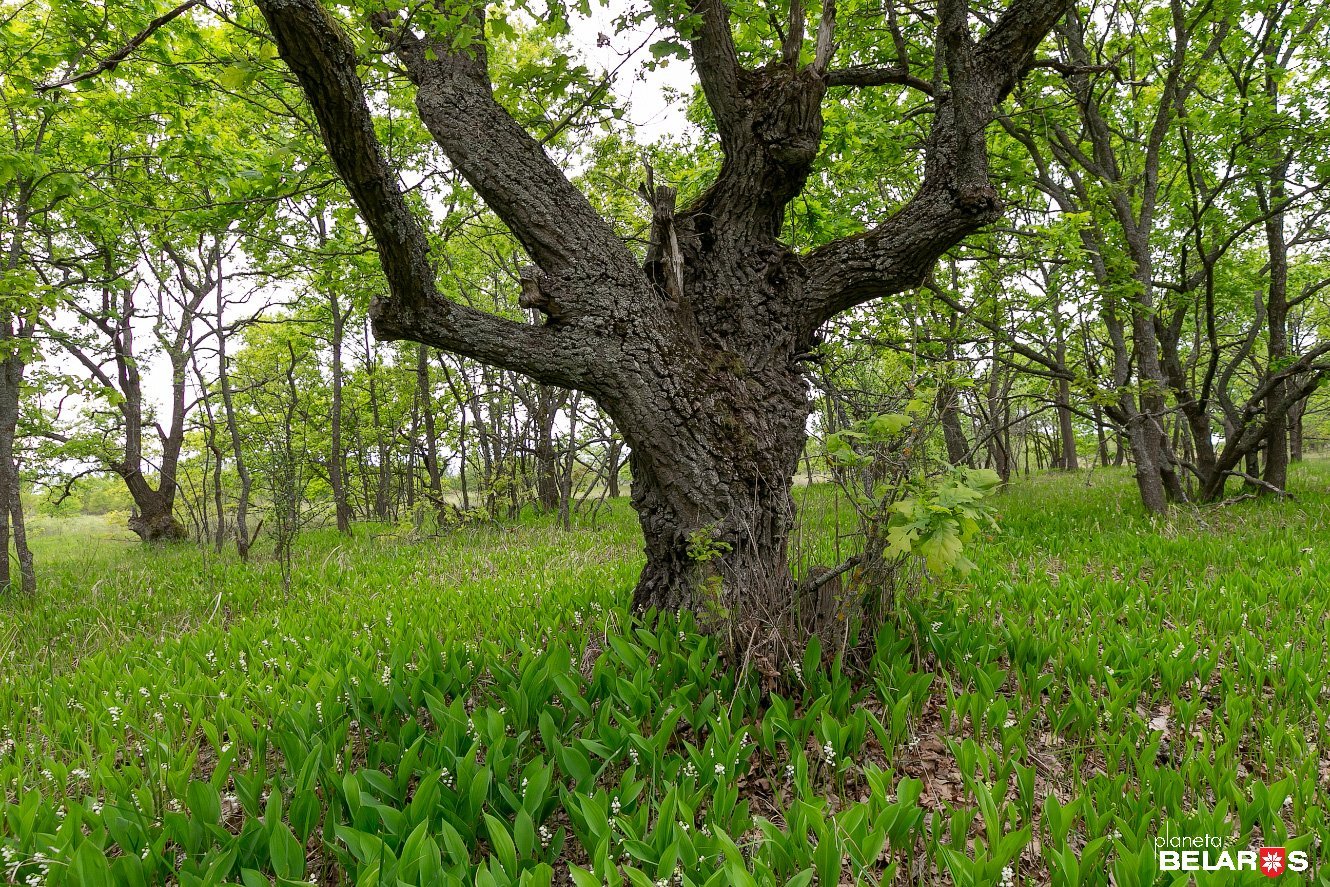 A “dragon oak” stood nearby with its arms and legs raised…

These shots show the direct consequences of the Chernobyl accident. This is what the former collective-farm fields look like. Once the largest harvests in Belarus were gathered here. After the accident all ditches and channels were blocked with dams to prevent radionuclides from being flushed into the Pripyat River. The territory turned back into a swamp. And that was a new expanse for waterfowl. 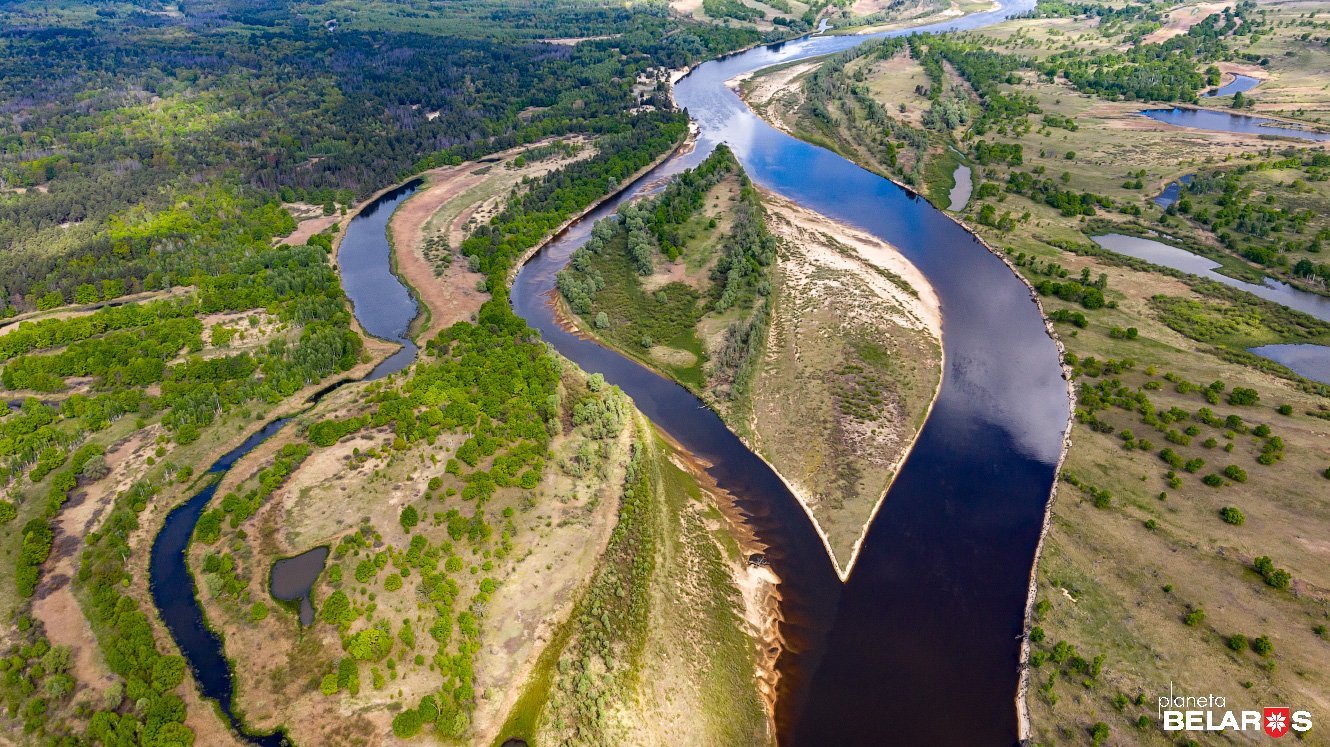 Speaking of the Chernobyl wilds, of course, we need to remember the floodplain of the Pripyat River itself. It is fantastically beautiful during a large flood. But it looks good during low water as well. 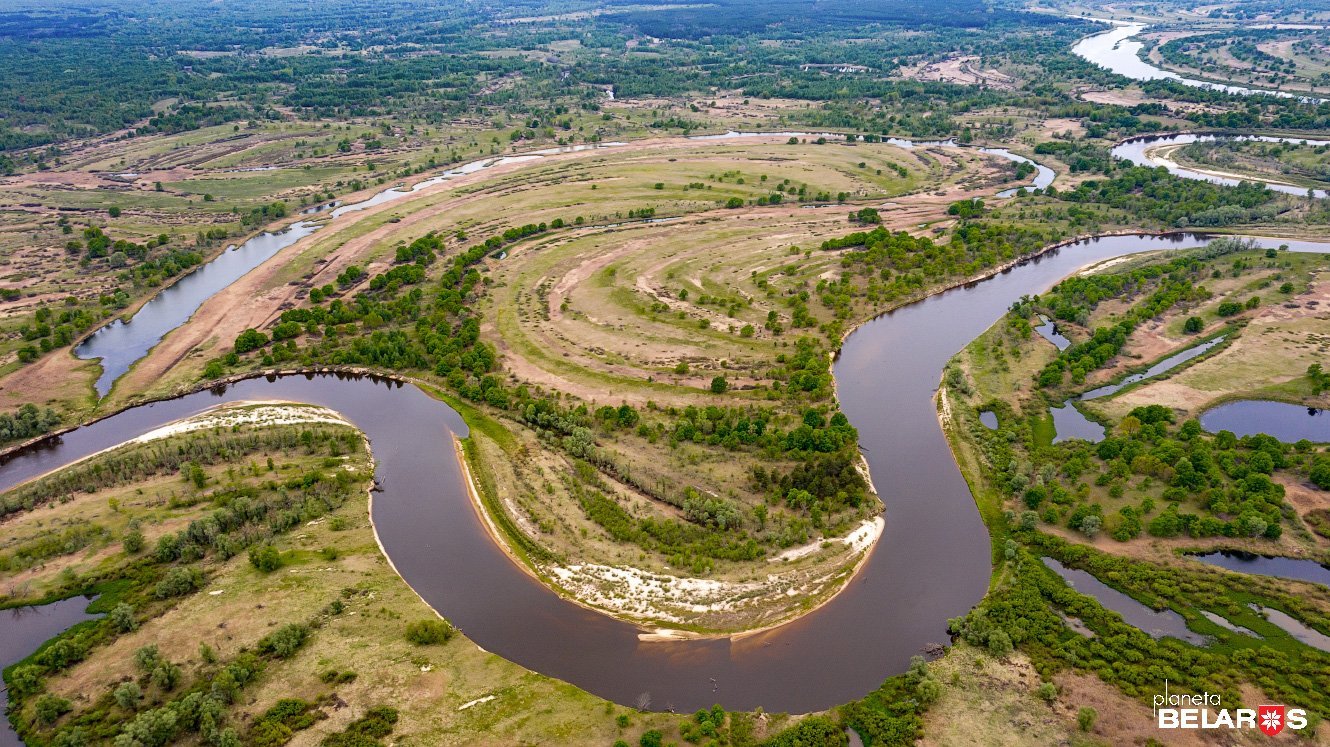 Animals and birds are attracted here not by beauty, but by the absence of man. 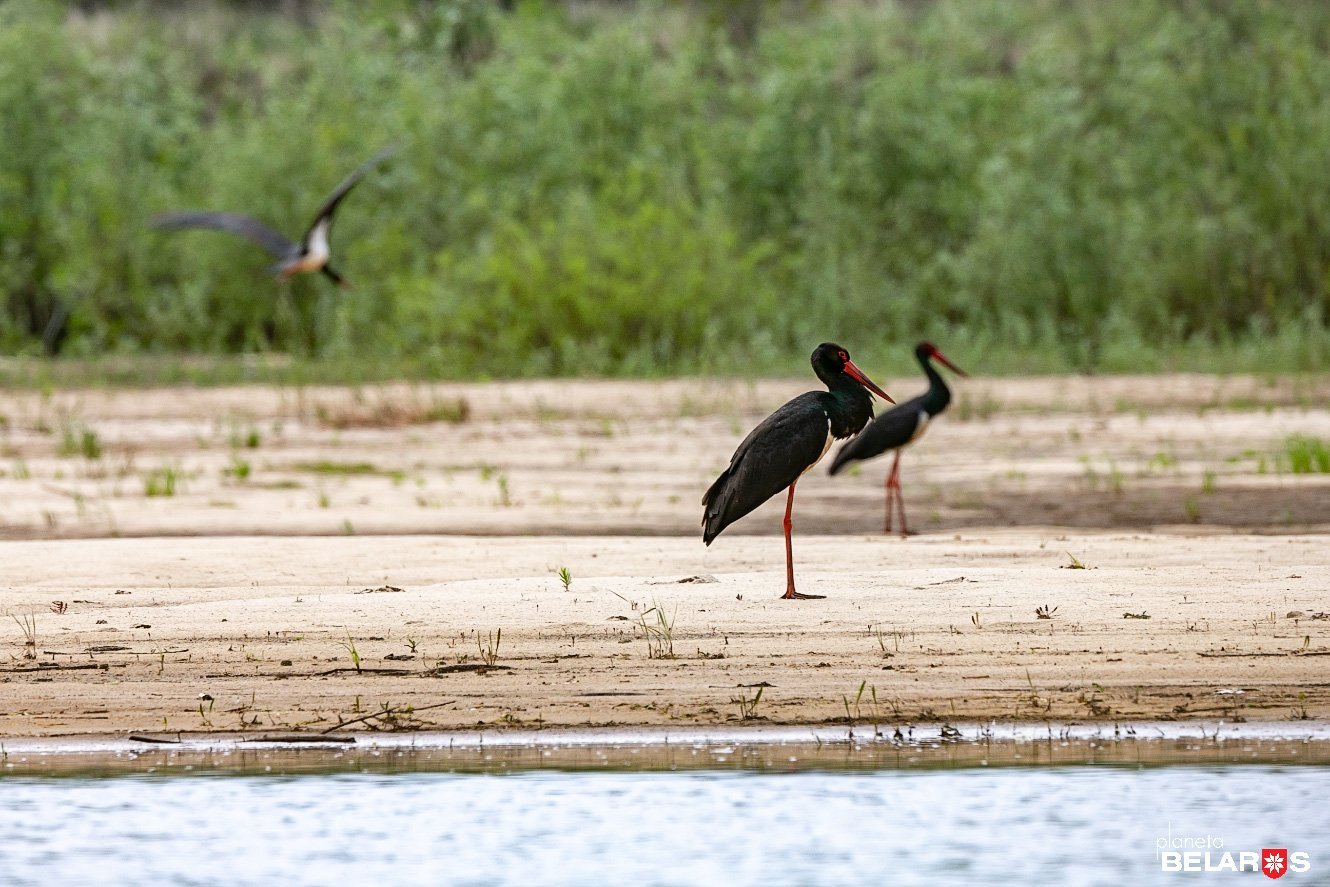 During only one boat trip I saw more black storks (Ciconia nigra) on the river banks than in a couple of previous years of shooting in all other regions of Belarus. 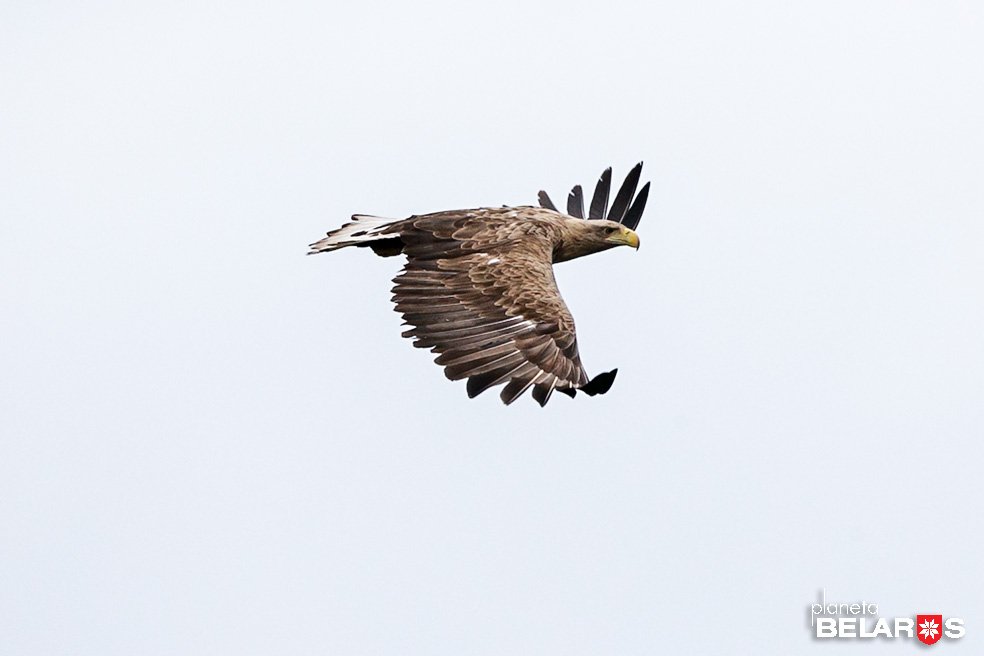 White-tailed eagles (Haliaeetus albicilla) circled above us almost all the way. 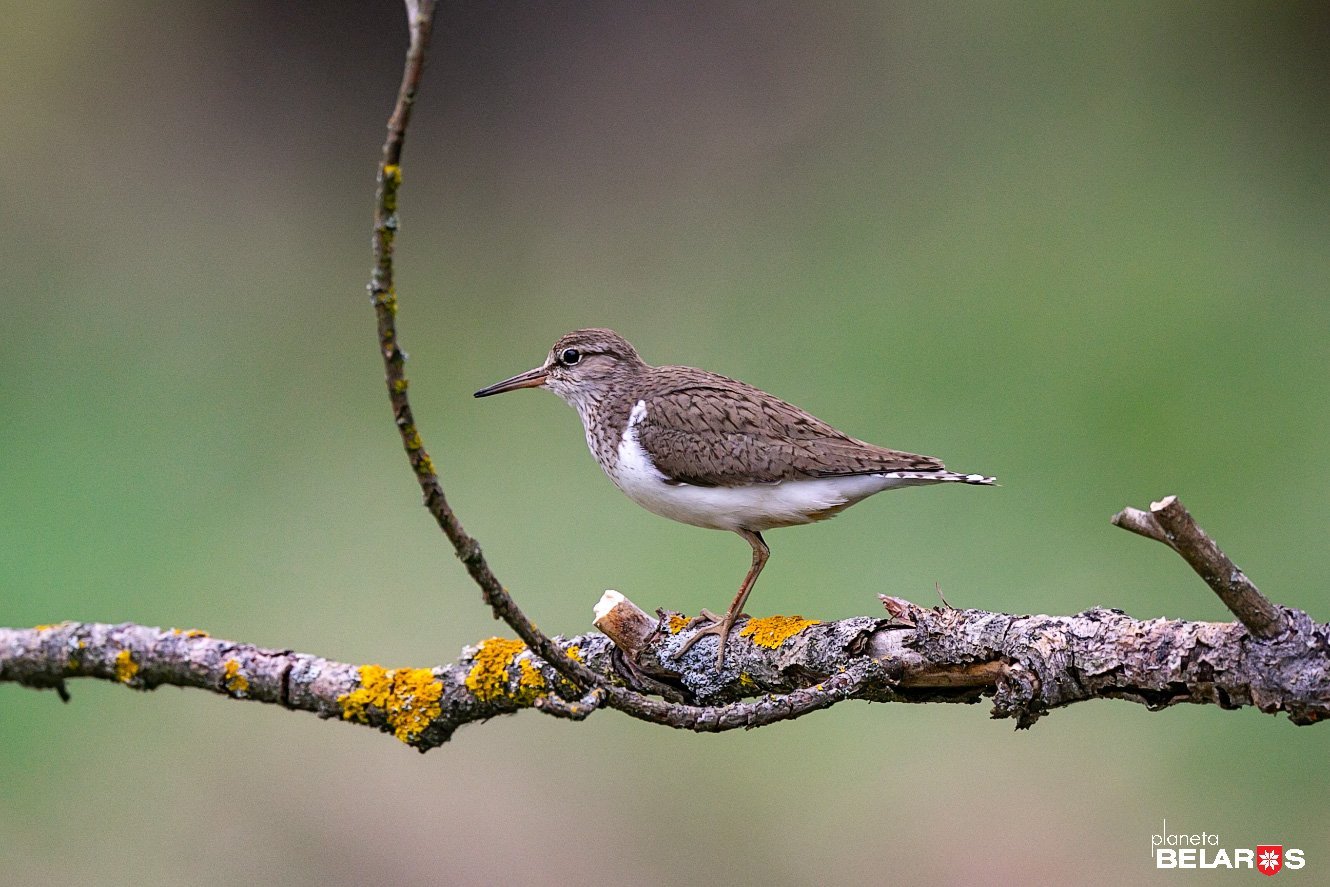 Various sandpipers were trying their best demonstrating their nesting sites. 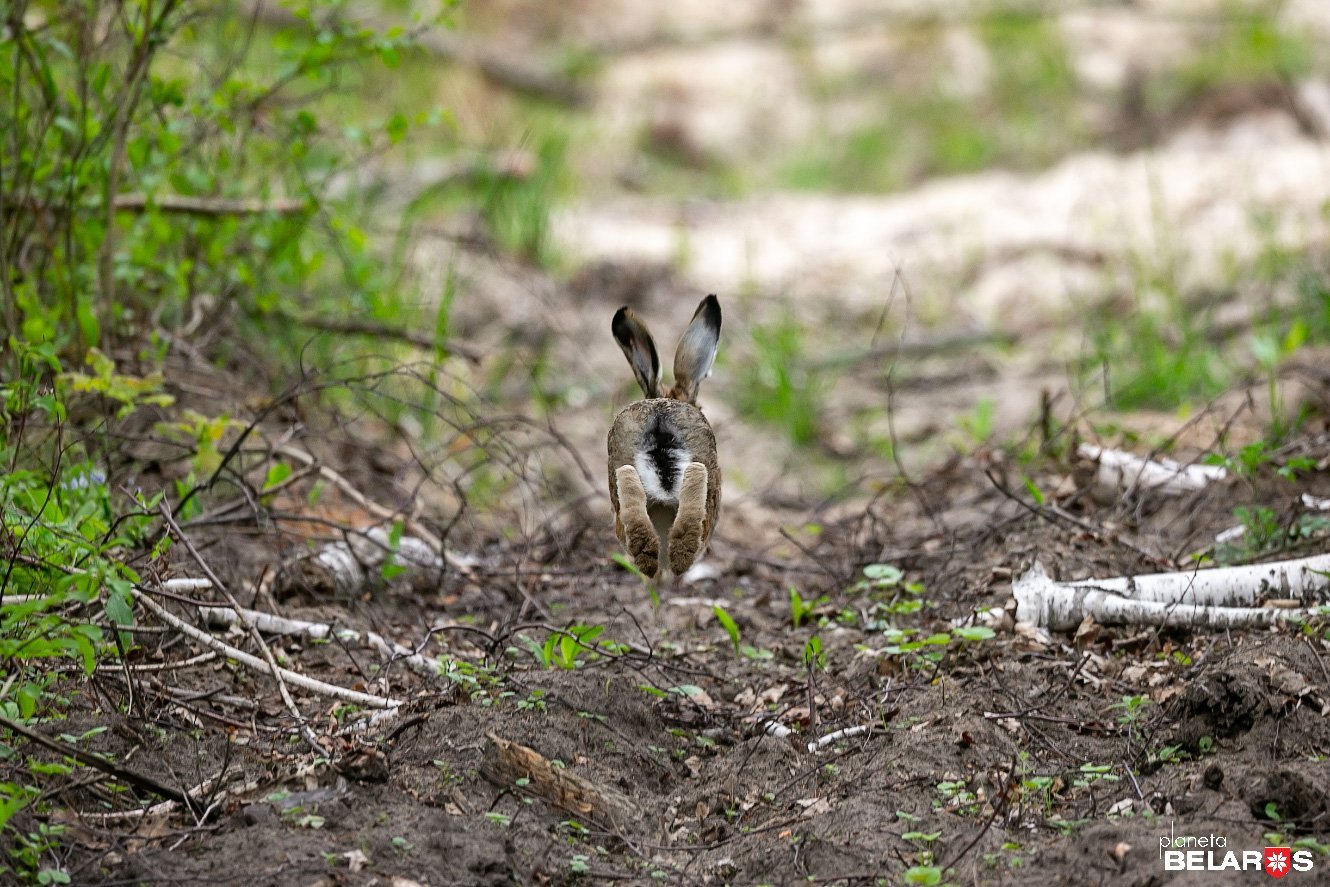 But we must mention that the birds and animals were still reacting at the presence of human in their usual way – like this hare, for example.

Even in May the water level in the river was very low. It is difficult to predict what will happen in August or in September. 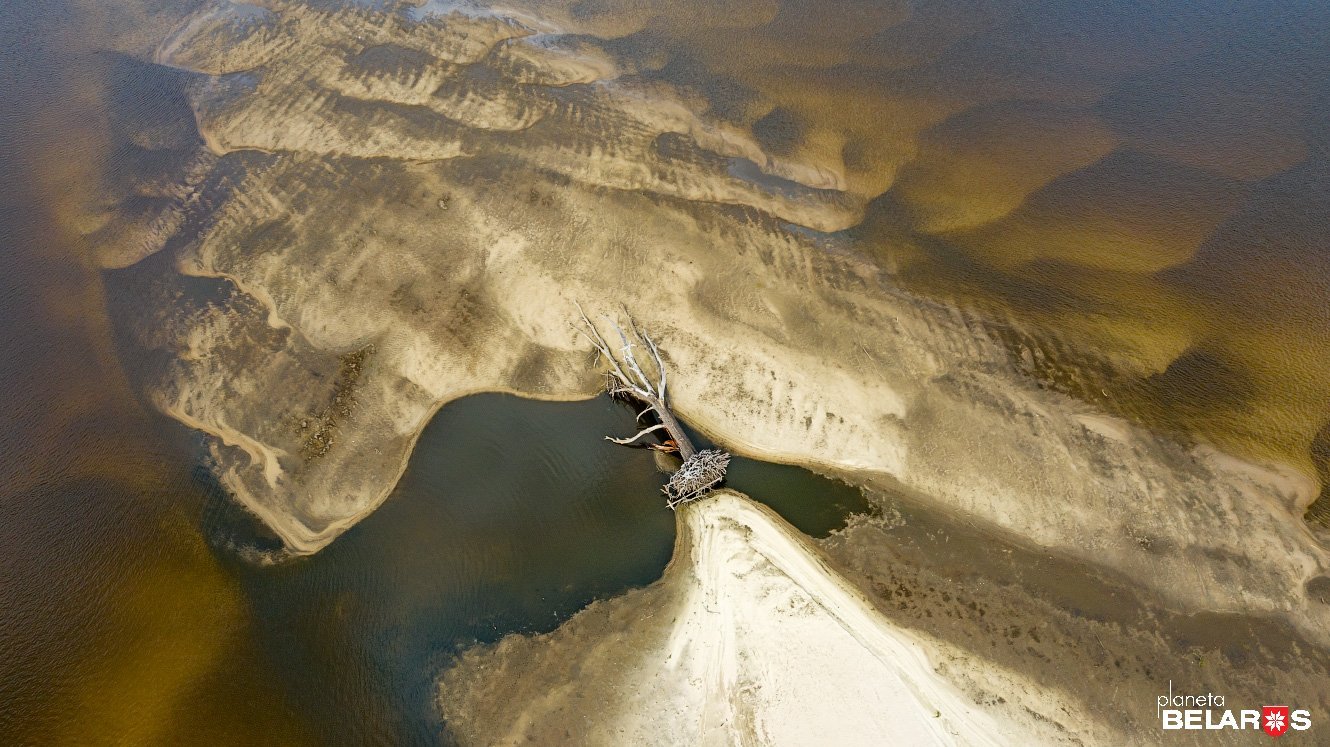 But I really don't want this shot of the dead oak tree to become a symbol of the Chernobyl zone. Neither the symbol of Belarus in general…