Galina Pavlovskaya: "I invite you to the village, to my grandmother!

The Matseikawa Village Estate is located in the village of Pierabroddzie of the Miorsky District of Vitebsk Region on the picturesque shore of Lake Nabisto, next to a forest rich in mushroom-berries. It opened in 2010 and over the course of a decade it has accumulated excellent luggage for our guests, which we were happy to share with them. 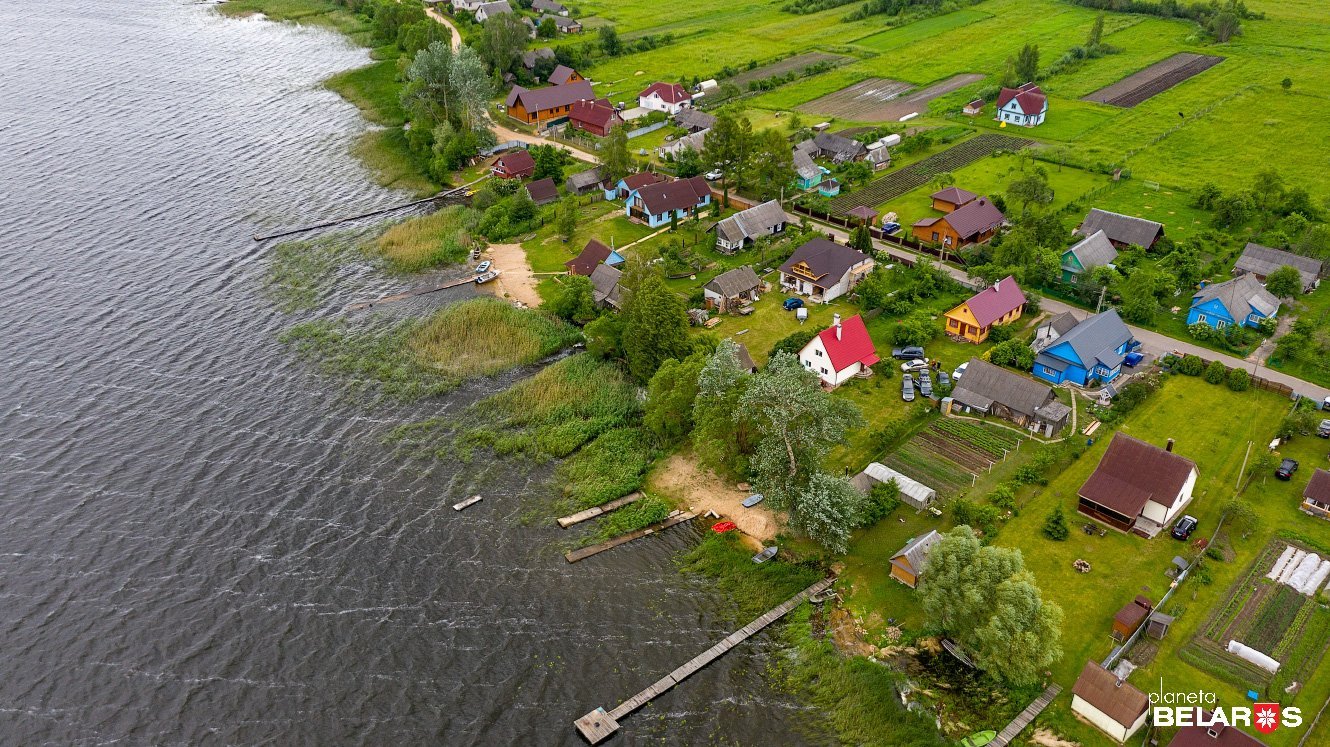 - Cyclists and kayakers, lovers of bright impressions and fascinating journeys like to visit us. There are 14 lakes around the fence. From our homestead, you can get through a duct system to the lakes of Obsterno, Vazha and Ukla and reach Braslav itself. Our places attract inveterate fishermen, there are bream, pike, crucian carp, roach, burbot, tench, perch, pike-perch and other fish.

The shores of Lakes Nabisto and Obsterno are low, sandy, with easy access to water. In summer, there is grace for families with children.

Our "green routes" are also interesting and fascinating: these are the Republican Landscape Reserve "Yelnya" and the hydrological reserve "Moss Swamp", where raider Kasya Kazachenok leads the willing, and Dedinskaya Krinitsa, and the Wolf Mountain, and the tracker stone.

The names associated with our sites attract historical researchers: in Zabolotye there is a family estate of a famous sculptor, rebel Heinrich Dmakhovsky, in Kamenpol - Svyatopolk-Mirsky, etc.

Feel the warmth of the earth...

As I myself am a child of the village of Perebrodye, I have always wondered how people live in the local villages during my study trips abroad. And I was very impressed by the idea of a potter's plenair in a Lithuanian agricultural farm: the owners gather potters, they communicate, make products, then organize exhibitions and take commemorative pictures. I did not manage to copy it in its entirety: in Perebrodye, we do not like pottery. But I remembered that my grandfather and auntie used to roll valenki. And our sheep were traditionally raised here. I realised that our creativity must be connected with wool. 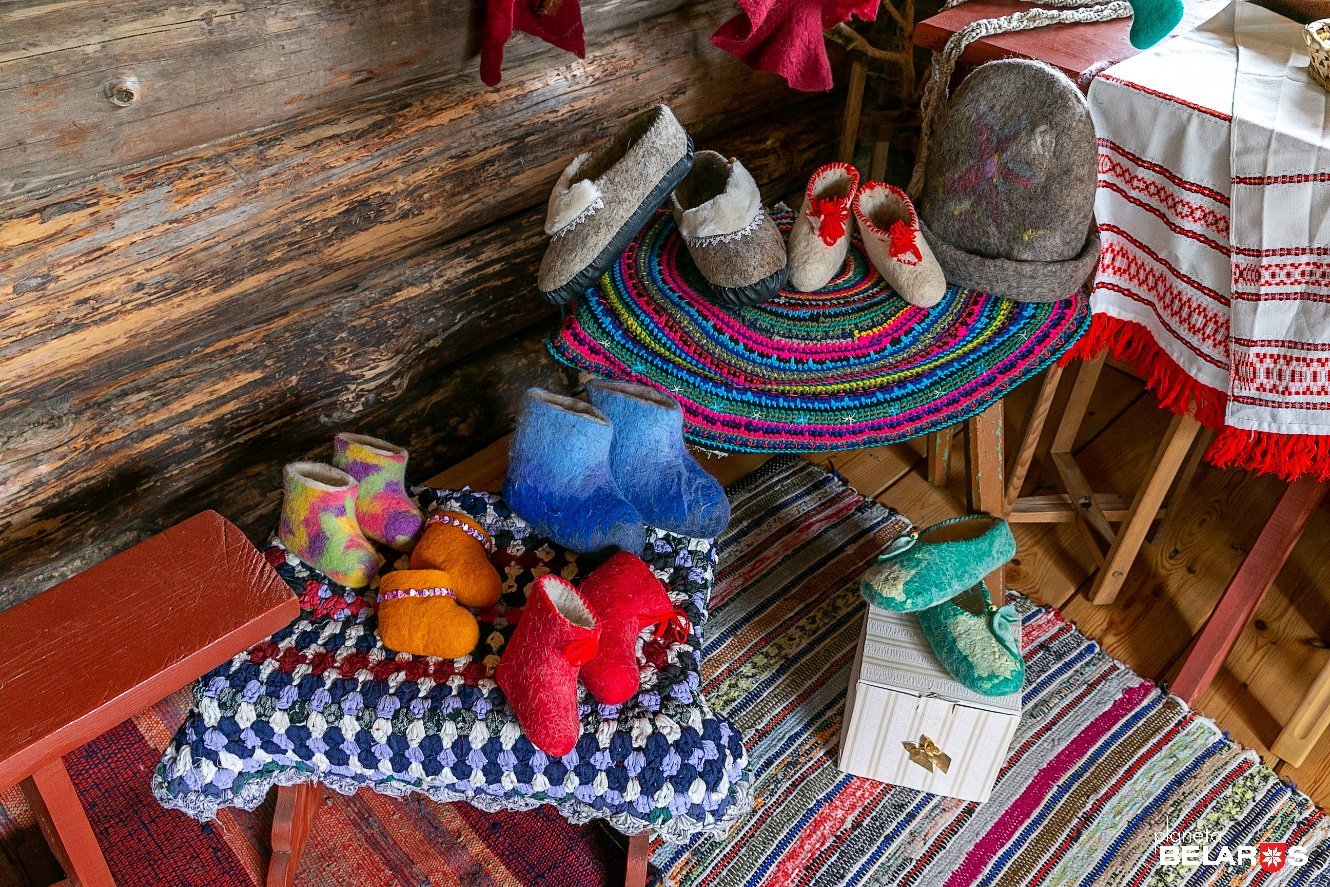 When she returned from her trip in April, she immediately applied for and received a grant - and in August 2010, she had already gathered the first participants for the "Warm Earth" sheep wool roasting pilot. For five years now, we have held such events annually. 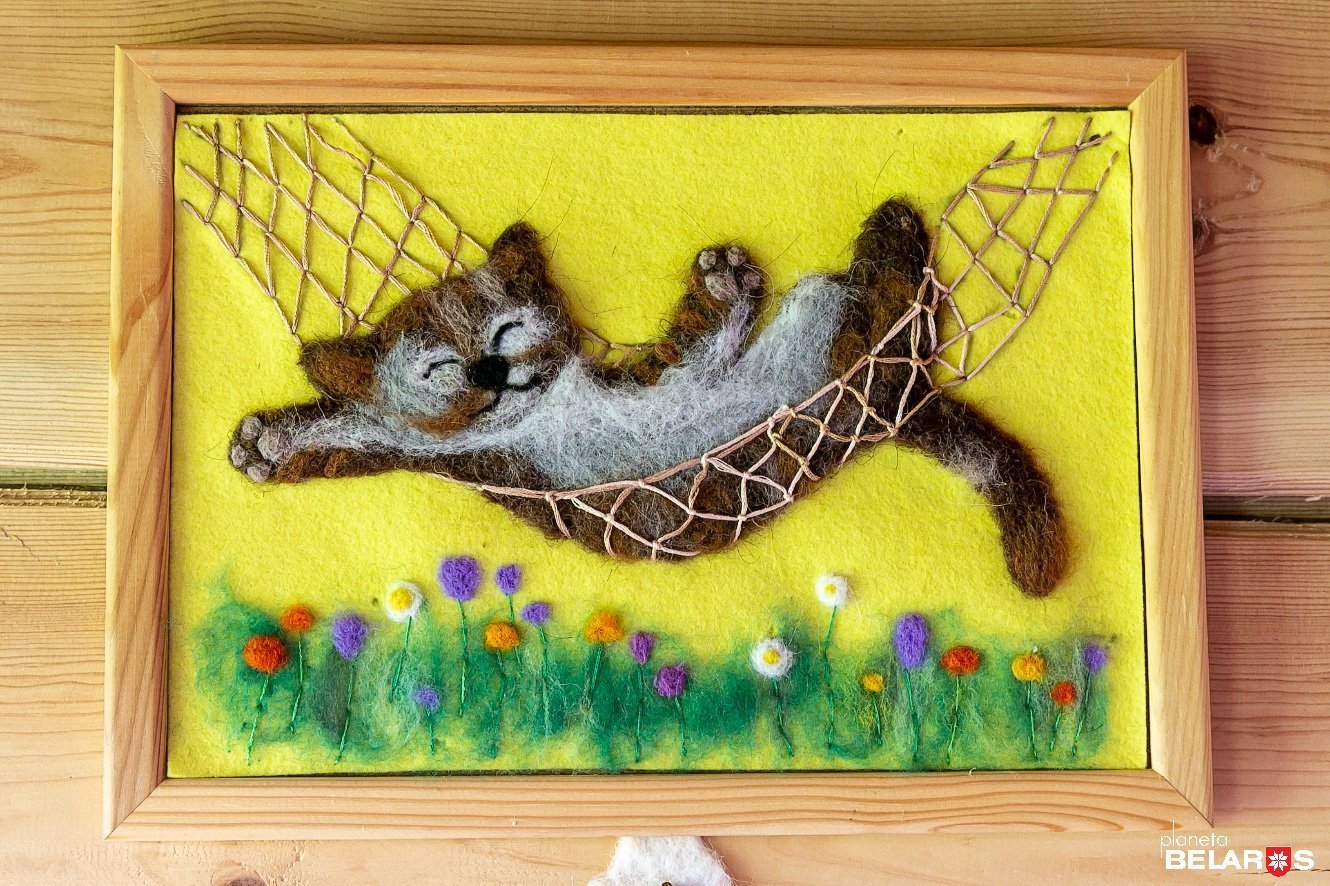 Over the years, there has been a backbone of participants: these are the mistresses of "Petukhovshchina", "Balsan" and other agricultural estates, and simply interested women. And in the "Orekhovo" estate of the Braslav district there was the "Flax Academy", where we were taught to work with flax. This was how the Miorsko-Braslavsky agro-tourist cluster came into being.

Later, our flyer grew into another form - a summer family camp called "We are together! My grandchildren are growing up and I see that many children cannot be taken away from gadgets. So the idea of distracting them from electronic toys, at least for a while, came up. This is the first one. And the second is to make sure that the family has at least some time together. So that the children, their grandparents and parents can unite and be inspired by joint activities and new ideas. We held the first family camp of this kind in 2015.

We offer our guests to learn many of the secrets and mysteries of village life, to test their dexterity in the rope town and at the Olympic Games, endurance - in the swamp, and luck - in the quest, to try their hand at macramé, felting and vytinanka, to discover talents & nbsp; and to fight with their creativity, fantasies, masterpieces and achievements. Admire swans, hear drinks, see beaver huts, enjoy nightingale singing, meet noble deer and much more.

What do we do? For example, handicrafts made of natural materials: we go into the forest, where we collect everything we meet on the way: moss, roots, twigs, cones. And based on this, we create our masterpieces.

We hold master classes in various folk crafts: work with wool, ottinanka, malovanka, work with straw, with dough. We have a museum of rural life in our manor, but I understand that it is difficult for children to endure a long excursion, so every new day I start for them with a 'jerky hvilinak'. We come to the museum for literally 15 minutes - and each time I reveal a separate topic, for example, about cows, bread, handicrafts and tools.

An interactive day "Where did the butter come from?" was very memorable to our little guests. In the morning we all went to the field where the cows were grazing, saw how they were milked, the hostess poured us milk, it settled down, we collected cream - and the whole team shot down the butter. One of the grandmothers made pancakes, the bread was covered with this butter... And at the end the children asked: "Why can't you buy this butter in a shop?"!

We organise various types of entertainment: intellectual (games "What, where, when?", mathematical quizzes), sports. We hold small Olympic Games, not spontaneously, but with preliminary training. You have no idea how exciting this is! The whole family is involved: grandmothers stand at the gates, grandparents are the head coach. And everyone is united by bright gambling emotions!

And when the school year starts, we actively invite families to come to us for the weekend. Such a tour was called "To the village to your grandmother! 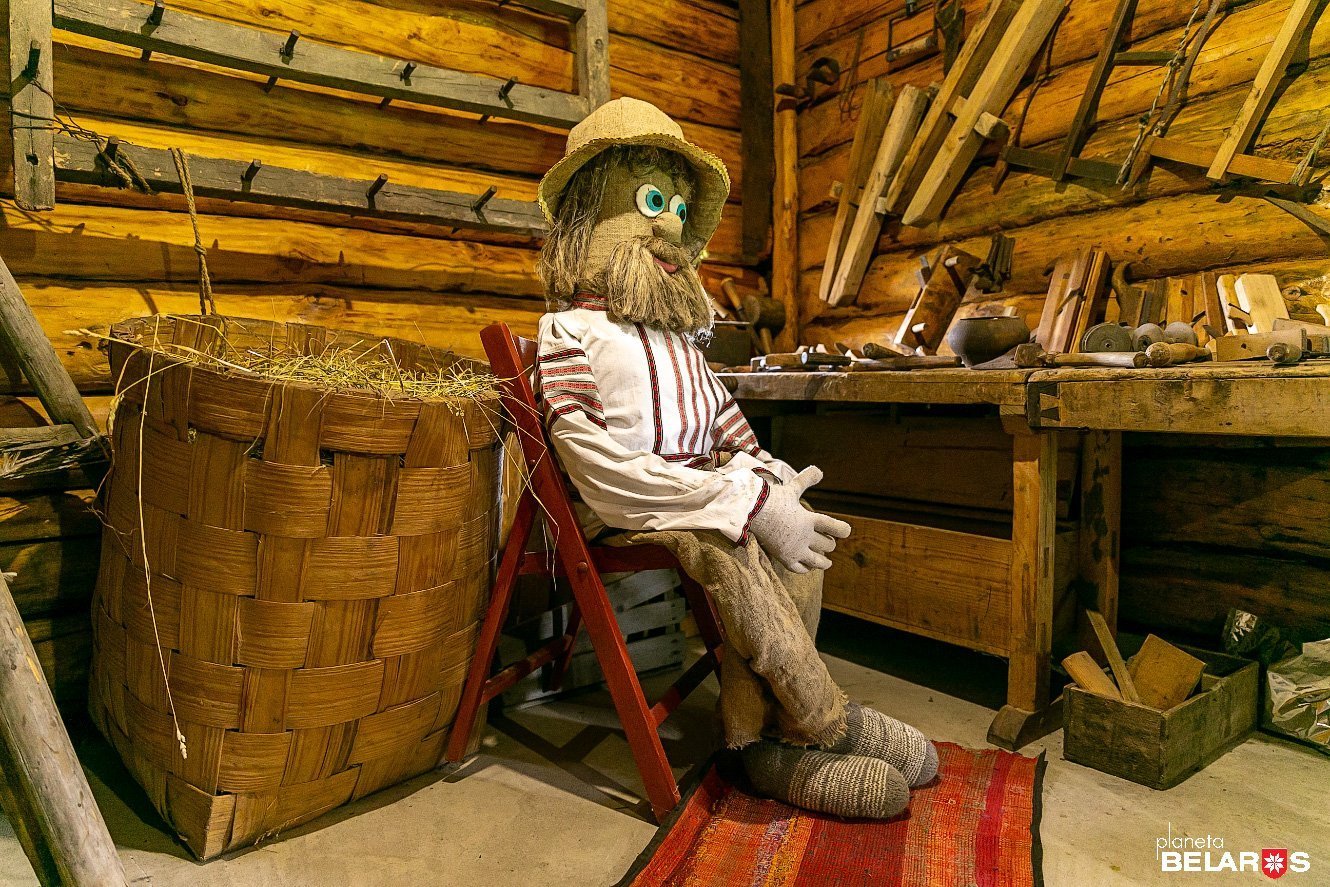 I also give master classes and excursions for adults. Last year, which at the state level was recognised as the Year of the Small Motherland, my husband and I opened a small museum called Matseikavy Ramestvy. Here every carnation, every plaque is warmed by my father's hands. He was a simple collective farmer who used to make something for the household every day at lunchtime, nailing at least one board. This was how he was brought up by his grandfather Matsei, who was born in 1872 and after whom the estate is named.

There were seven other family houses next to the house of Macieja - it turns out that our family made up a significant part of the village. My grandfather had golden hands, he could do anything. And in the museum, we collected things dear to the heart, each of them touched by my ancestors' hands. These are not just exhibits, they are living history! "Zugly, noisily, birulki, hamut" - only in a museum can you hear these names and see them.

We have a special story about bread!

...I remember my mother 'raschenya' bread, on natural leaven: the house was carefully cleaned, she dressed in everything clean, and my brother and I had to be quiet, because bread does not like noise, fuss and draughts.

There was a prayerful attitude to bread. With a cow, milk and such bread, a person could live normally - there is everything the body needs!

From a young age, the village was accustomed to work. There was an understanding that your child's ability is later your "bread card". When he was ten years old, the boy could already walk behind a plough. There were large families where crafts and traditions were transmitted.

And with such an abundance of work in the village, the women were also able to do handicrafts. They were guided by an eternal craving for beauty, and people wanted to decorate their lives. 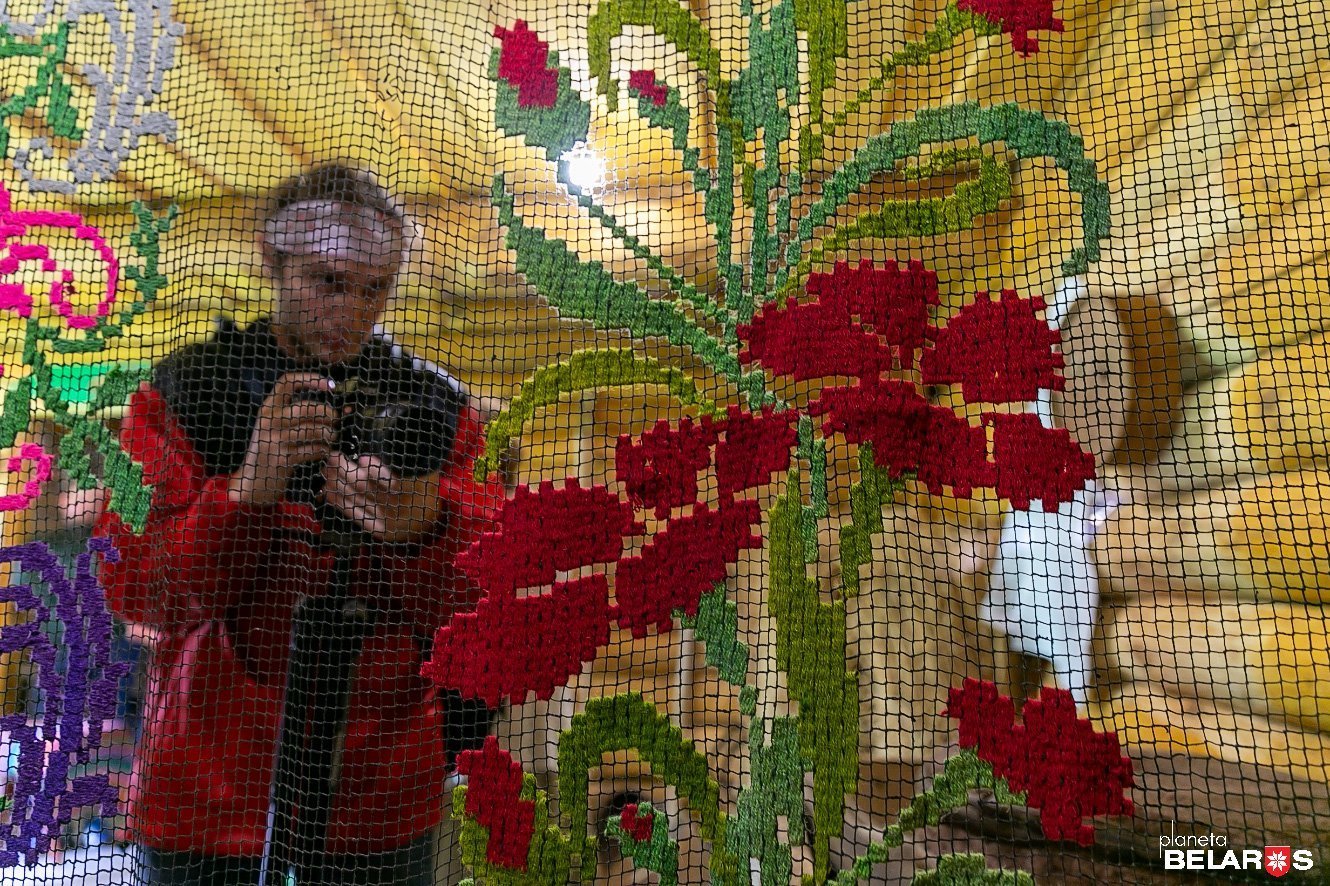 This tablecloth - mesh embroidery - decorated the table over woven white for the biggest holidays: Christmas, Easter. The work on it was long and painstaking. At first linen threads were spun, very thin - it was not an easy job! - then a fine mesh was knitted, which was embroidered with a coloured wool thread dyed with natural dyes.

I remember the white curtains hanging on our windows: grid embroidery. It was extraordinarily beautiful!

They wrote: "Fermented people are very lazy, even gardens are not planted, but the lake feeds them. There is some truth in this: we have little land, there is a lake edge around us. They caught fish, sold it, and lived with it. In Germany, there was a demand for fish "onions", which were used to make artificial pearls.

The fenugreek has its own flag and coat of arms. There was no serfdom, the people were always independent.

Magdeburg Law was in possession of the fenugreek.

Perebrodye is also a very "musical" village, and Vasily Yunevich and Mikhail Shumansky, soloists of Ryhora Shirma's choir, came out of here. I remember very well those times when every one of our houses used to play various instruments and sing. My father is a self-taught person; he played accordion, accordion, cymbals and could catch any melody. When he and his gurt were gathering at our house, there was such wonderful music that I was afraid to open my eyes: what if this was all a dream? By the way, do you know that wood for cymbals has been drying for two years to "sound"?

Our famous four-voiced Perebrody folk choir emerged from the church choir. Unfortunately, traditions go away with people, but we are trying to revive something... And for 15 years, the Perabrod Zorka folk festival has been taking place in Perebrod, where we sing, dance, recall folk rites and various games. 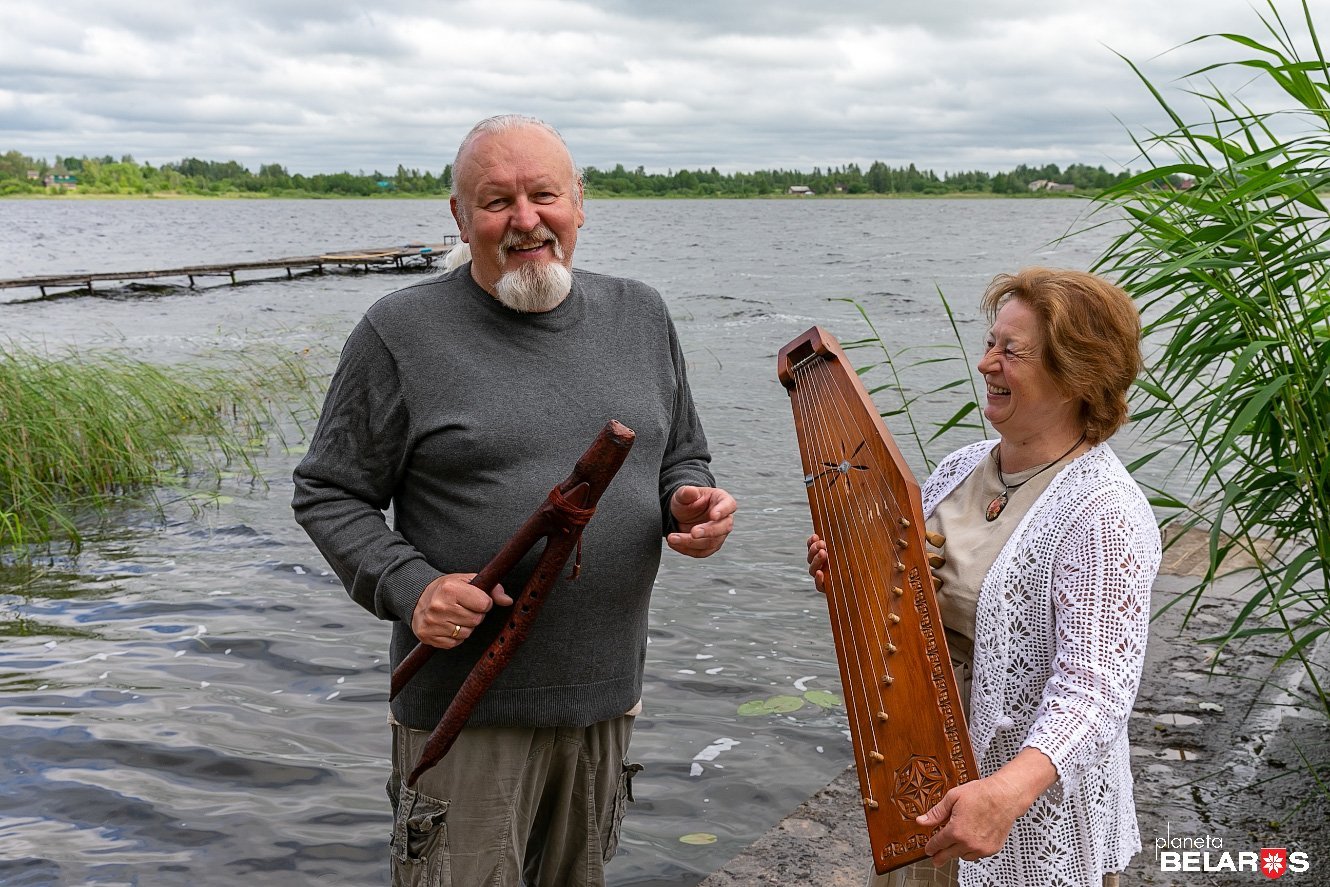 The grandfather was called Matzeika because he wasn't very tall. We were all "Matzeikawa" in the village.

He showed everyone that man is the smith of his happiness! He had little land, and none of our perebrody people wanted to marry him. Then he harnessed his horse and went to the neighbouring village from where he brought the beautiful Zuzanna, proving to everyone that it is not worth getting lost in any situation. She came with a chest of dowry to everything else! There used to be such a custom: when a bride was brought into the house, "kufar grazing" was carried in front of the young people. And today this kufar occupies an honourable place in our museum.

Their grandfather was lucky, and with his wife they gave birth and raised three worthy sons and two daughters.

I would like to see the traditions of Perebrody not interrupted, so that happy and "fit" people live here!