I dedicate this article to the memory of a great man and a wonderful wildlife photographer –
to my friend Vladimir Alexandrovich Pushkin. He was also loved Kozyany…

When running any environmental research, it is necessary to have several stations, which must have different combinations of natural conditions in the region. After all, everything can only be comprehended in comparison! But the researcher always has favorite stations.

I started studying birds of prey in the Northern Belarus back in 1972. And my first "long-distance" trip was a trip to the village of Kozyany of the Shumilinsky district. I arrived there with a note from the associate Professor of the Vitebsk state pedagogical Institute. S. M. Kirov Anatoly Maksimovich Dorofeev. That note was addressed to the teacher of biology, who worked in the rural school of Kozyany - to Gennady Borovikov, who became a friend of mine up to this day. Today there is neither school, nor post office, nor forestry in Kozyany – absolutely nothing. Not even a single cow in the entire village!.. But there are still wonderful bogs, the Krasomay Lake, the Obol and Svina rivers, and different types of forests. The more I studied the surroundings of Kozyany, the more I was getting attached to this unique territory, which became my favorite place for researches. 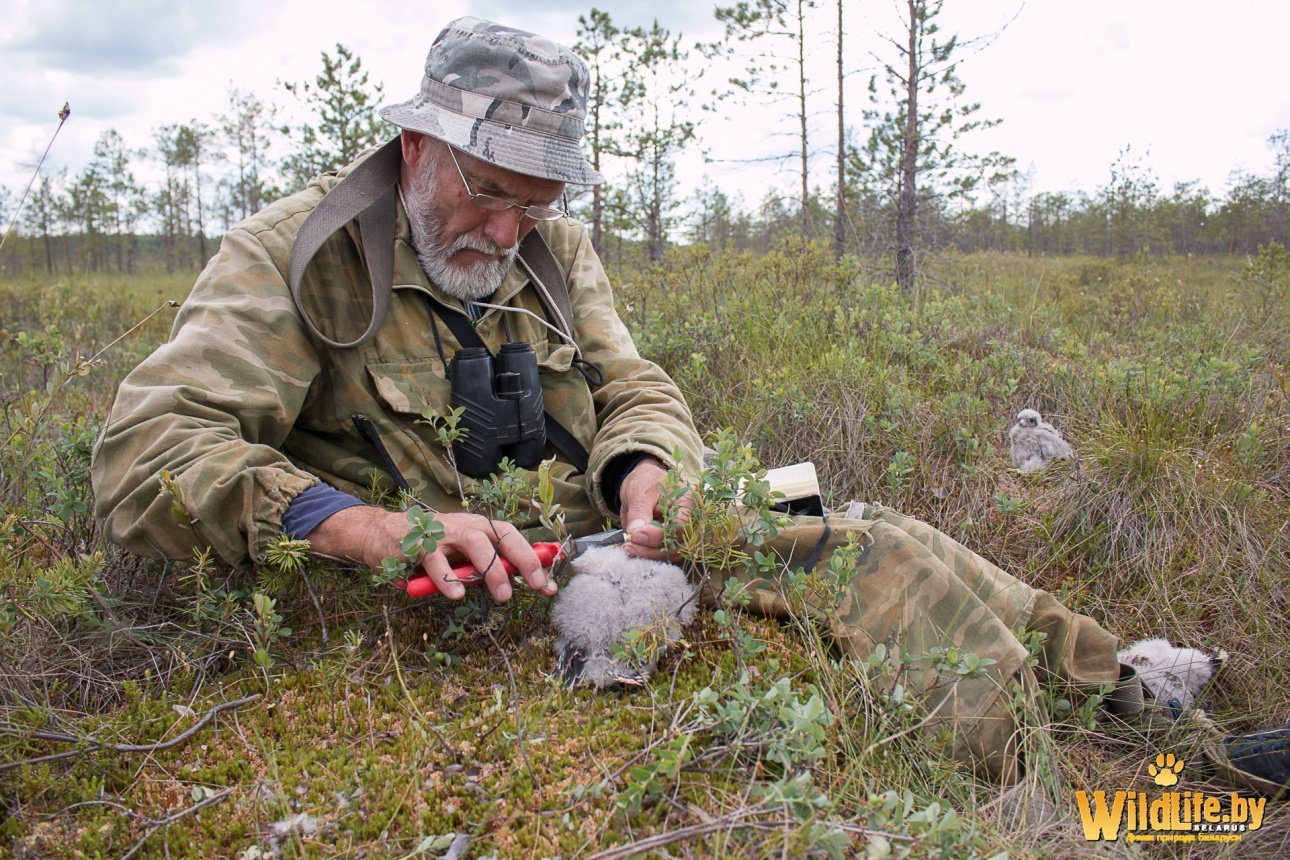 
All stations are differ from each other in the variety of birds that inhabit the area, including the feathered predators. It was here that I first found the nests of the Osprey (Pandion haliaetus), Short-toed Eagle (Circaetus gallicus), Merlin (Falco columbarius), Black Stork (Ciconia nigra), Ural Owl (Strix uralensis), Great Grey Owl (Strix nebulosa), and many other rare birds. The immutability of the environment, in particular that of the bogs, which have not yet been reached by civilization, stabilizes the nesting groups of predatory birds of this territory.

I have been observing many nesting sites of birds of prey for decades, which is reflected in hundreds of articles. Of course, the creatures in these areas are changing, because their age is short. But they are sometimes replaced by their descendants, as I will tell you later.

In addition to the favorite stations, every ornithologist has his/her favorite birds, which are always paid more attention to. One of these “special” species for me is the Merlin, the Pigeon Hawk, Falco columbarius, since, as I feel, we have a very similar "character" with this bird.

In this essay I will narrate about the history of a territory occupied by merlins of Kozyany. And there are at least five such spots in the immediate vicinity. 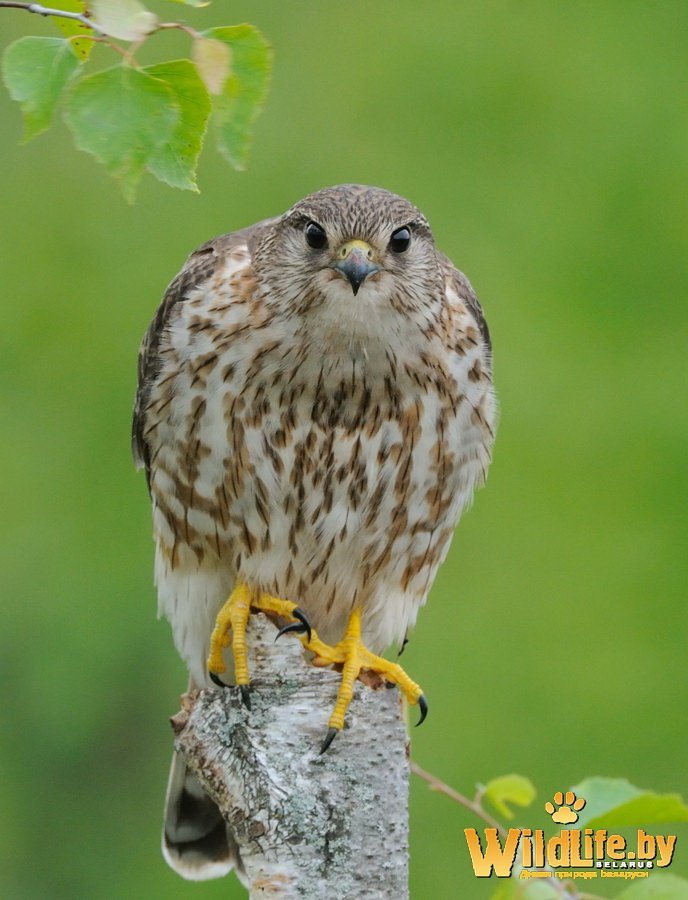 A female merlin near its nest. Photo by V.A. Pushkin

I think that this area has always been inhabited by pigeon hawks, but they were only nested directly on the moss, where it is extremely difficult to find their nest. In this case the falcons behave quietly and imperceptibly. But once they occupy someone else's old nest in a tree – they are no longer afraid of being noticed: when a person approaches, they start screaming for another fifty meters.

One day I saw a female merlin flying over this area, and decided to "raise" this pair to the pines. I built the first man-made nests from dense moss hummocks. They were cut with a hacksaw and fixed at a height of 2.5 to 4 m (8 – 13 ft.), and a couple of merlins started to occupy them annually. 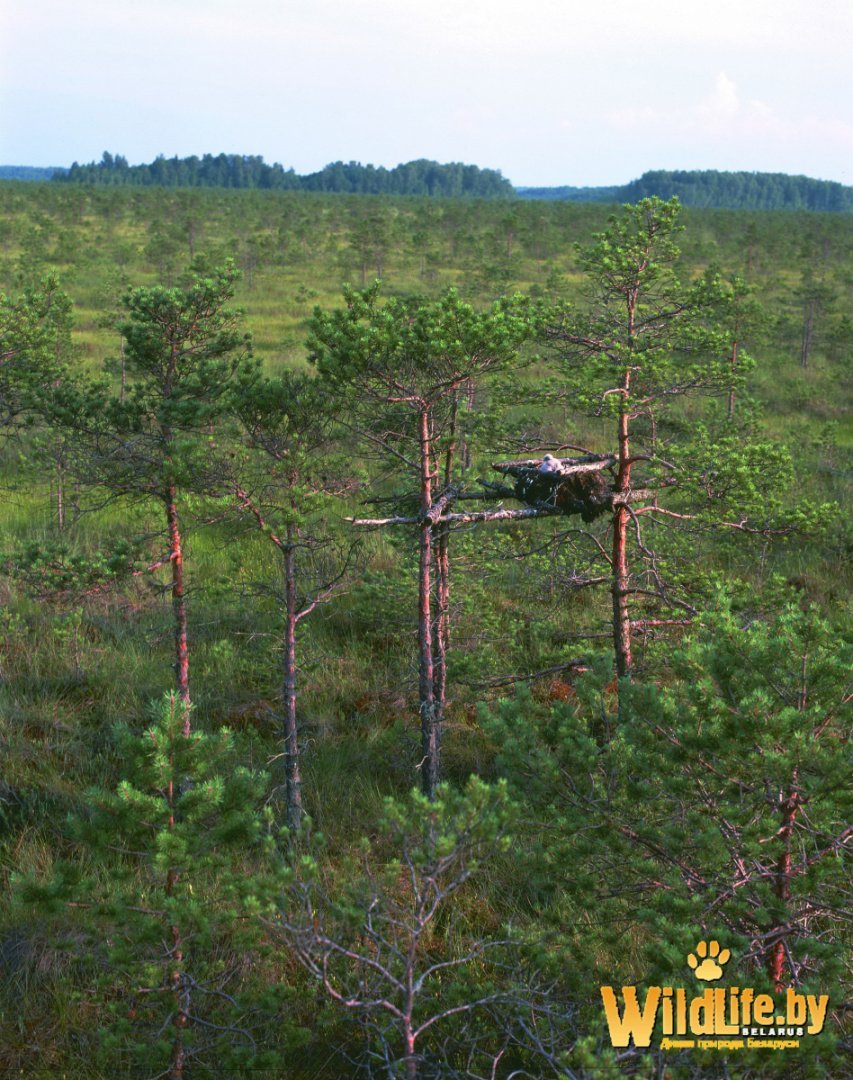 The artificial "hummock"-nest occupied by merlins. Photo by Sergey Plytkevich 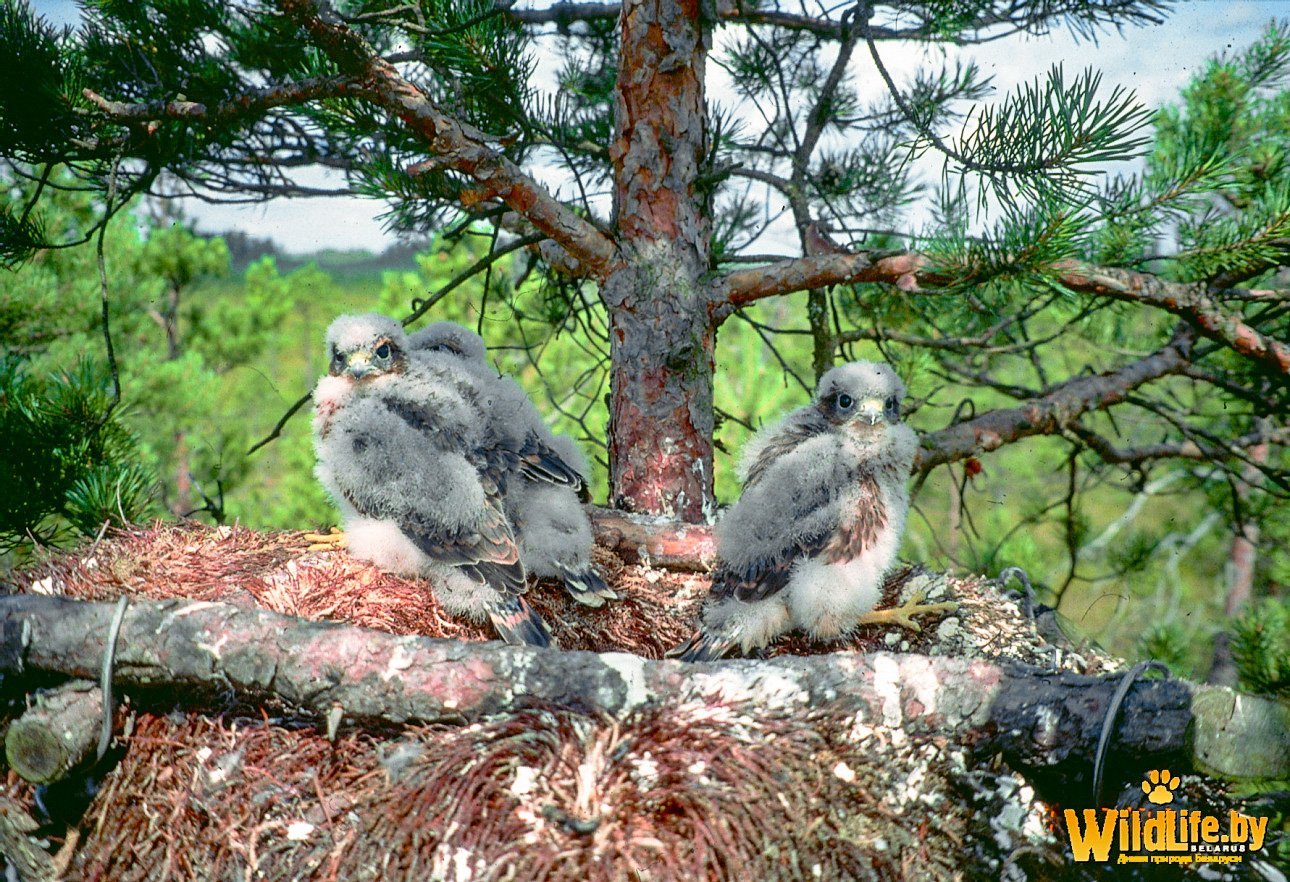 Merlins on the "hummock"-nest. Photo by V.V. Ivanovsky


One such habitable nest is shown in the film "Last eagles" by Igor Byshnev. The big drawback of such buildings was their shortness of life – I had to restore them almost every year, or to build new ones.

However, one of these "hummock"-nests resulted in a sensation. One day a well- known expert on birds of prey from Lithuania, Eugenius Drobialis with his friend, came to take pictures of feathered predators, and in particular those of merlins.

The guests were taking turns ambushing birds in a special camouflage cage, and finally they filmed and saw that the female was ringed! 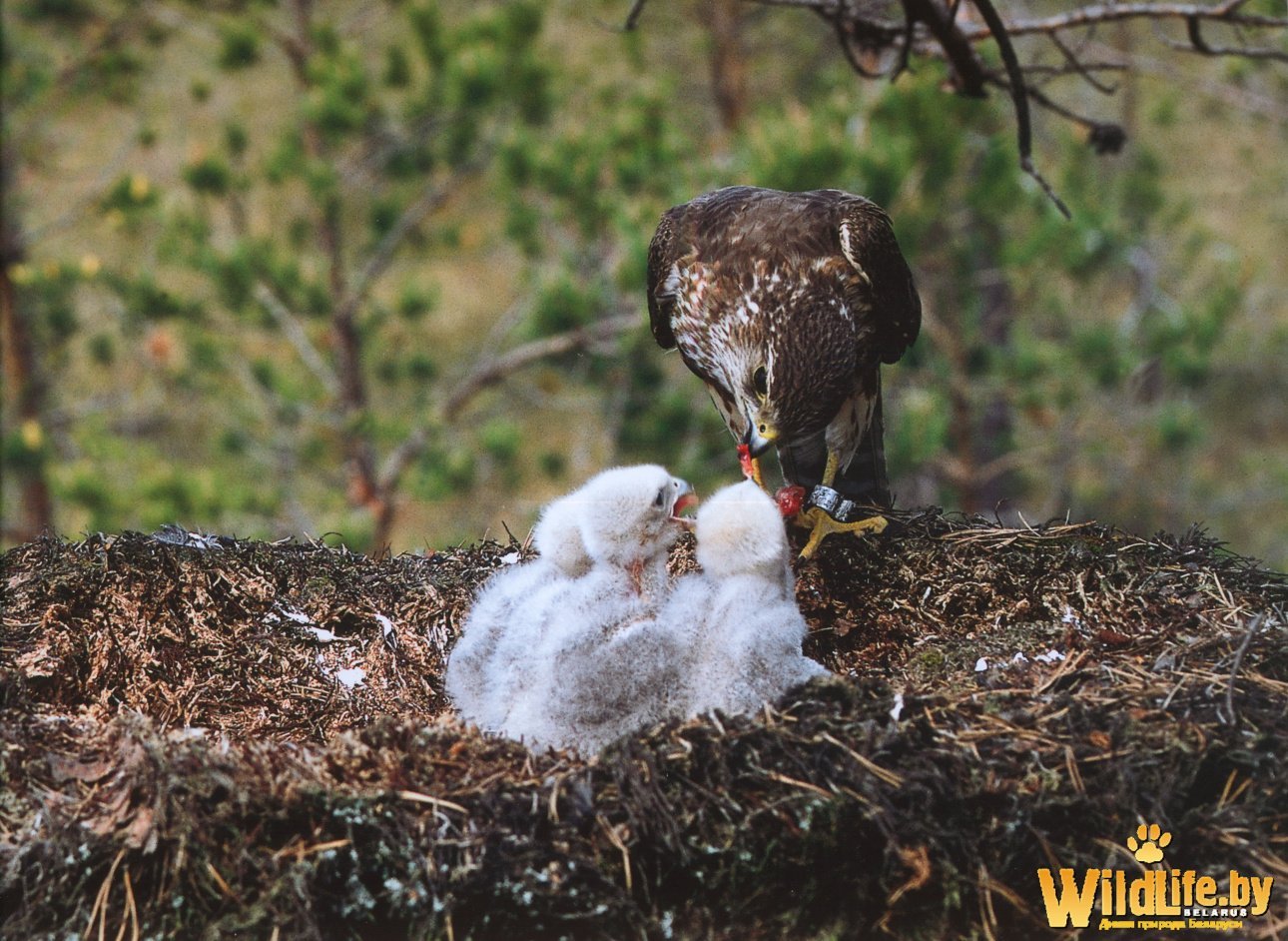 A female of marlin that has been ringed as a chick, is in the nest breeding her own offspring now. Photo by E. Drobelis


When the photographers had gone home, I caught the female. It turned out that she had been one of the chick ringed by me in this very nest two years ago!!! That's the secret of why for many years in a row this spot is constantly occupied by merlins. In this case the young female appears to have replaced her deceased mother. 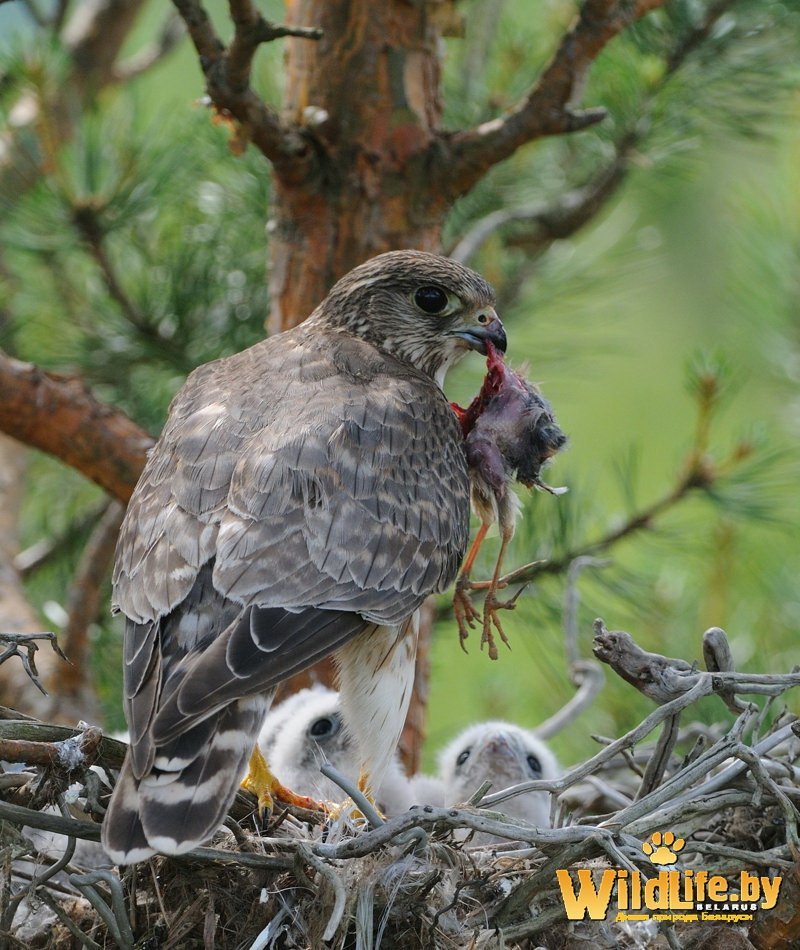 The female of merlin on the nest with a prey. Photo by V. A. Pushkin

Every year it was too time-consuming to update the artificial nests, so it was necessary to find a more durable material. One day coming out of the village sauna, I stumbled in the dark over a leaky bucket – and the same moment I got it: that was a ready-made semi-finished product for the nest! And behind every rural sauna one can always find a few leaky buckets, pots and basins.

Thus I fixed a few leaky buckets on the marsh pines, filling them with dense moss hummocks. The merlins based their nests there in the next season. And what is even most interesting, they first of all chose the most "high-altitude" nests. This passion, as I will tell you later, played a bad trick on the falcons… 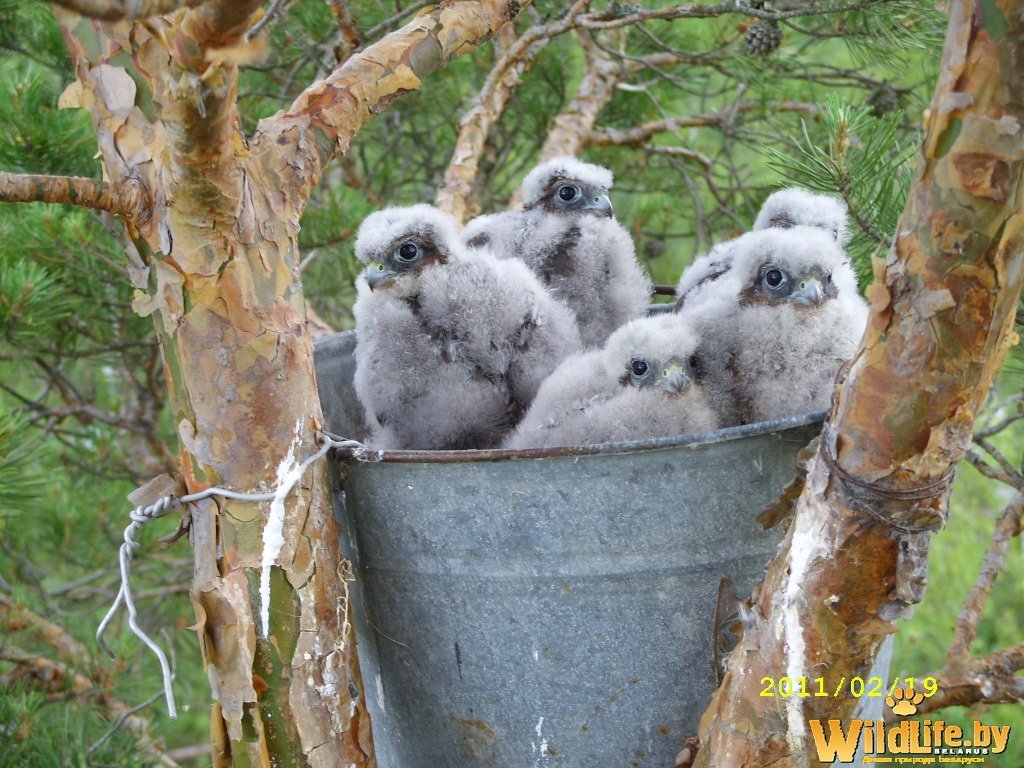 Merlins were nesting and actively guarding the immediate surroundings of their "bucket- apartments": they were attacking ospreys, short-toed eagles, and buzzards (Buteo Buteo) that dared to fly over the nest, or to built their homes nearby. They didn't touch only the woodpigeons (Columba palumbus) that were sometimes nesting in 10-15 meters away from them. Thus protecting their nests, the merlins were also protecting the nests of woodpigeons.

Our heroes have an interesting relationship with the predatory fish-eating bird osprey, a couple of which nested about 1.5 km (1 mi.) away. A large nest of ospreys crowned the highest dry pine like a cap. 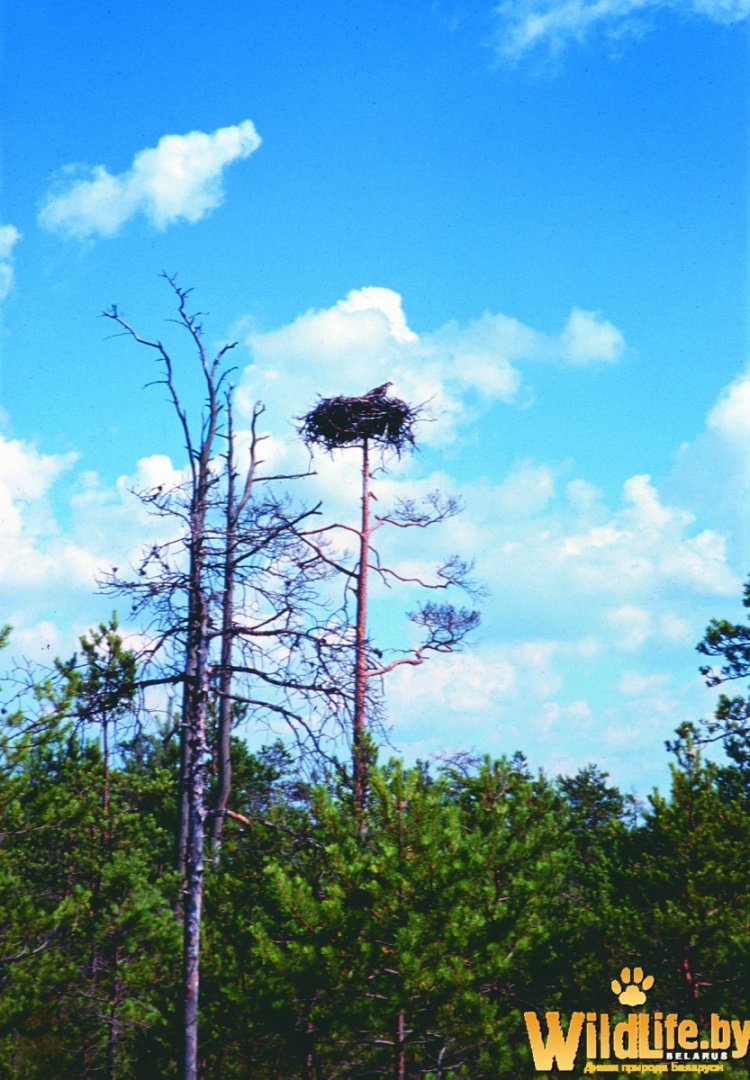 The nest of the osprey. Photo by V. V. Ivanovsky 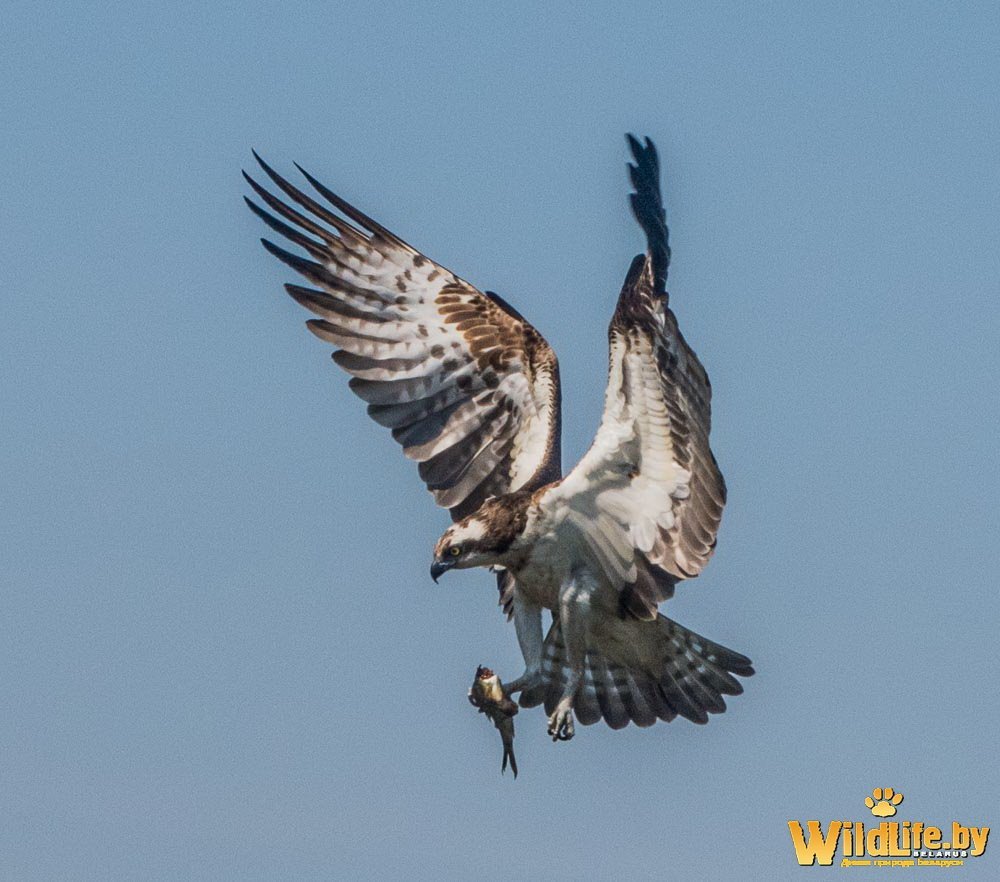 Osprey with its prey. Photo by V. Nikolaev

In one season the osprey's nest collapsed under its own weight. So in May 2002 I had to build urgently an artificial nest for ospreys on the top of a live pine tree about 300 m (1000 ft.) from the nests of merlins. I have known several examples of such neighborhood "merlin – osprey", when birds coexist normally and bringing up their offspring. 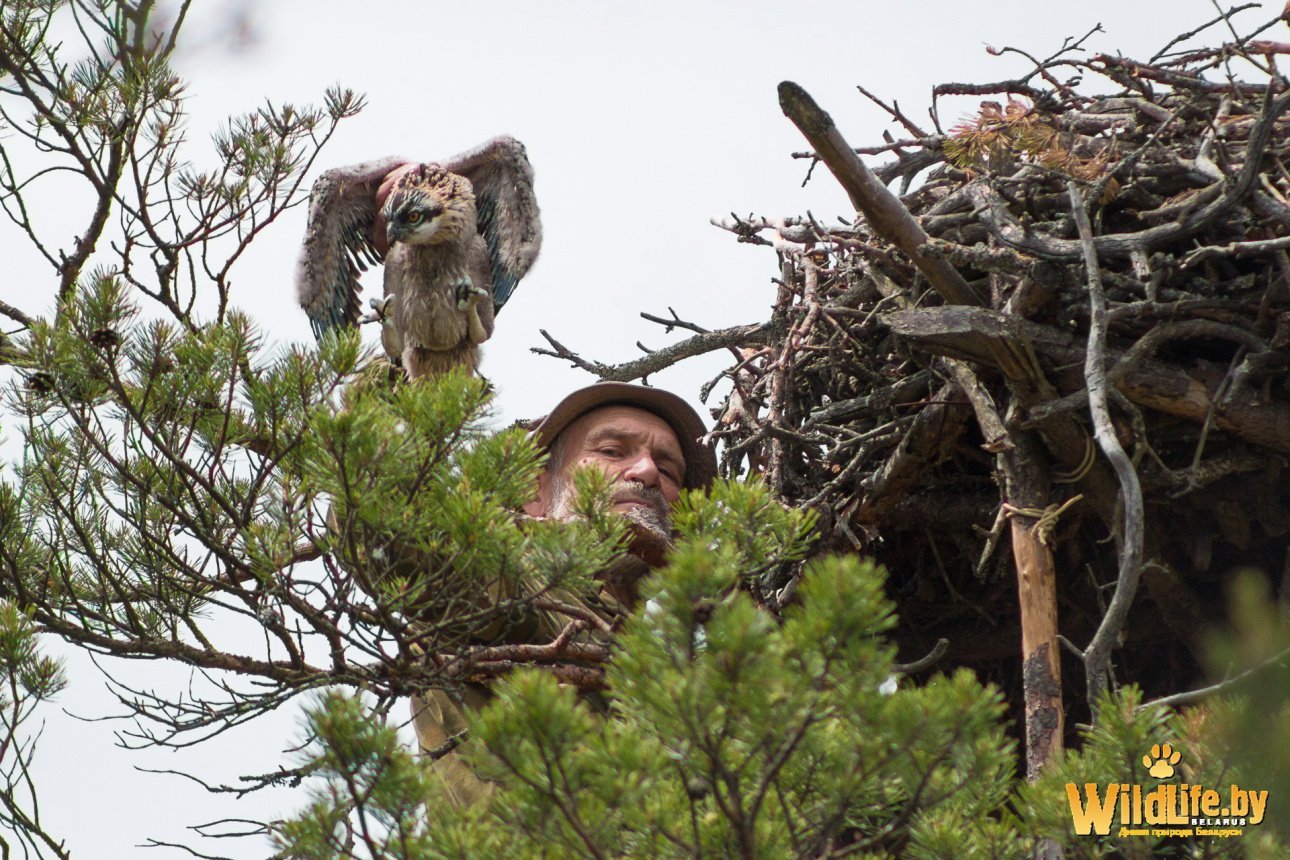 Ringing of an osprey. Photo by A. Andrianov

The ospreys found my nest and finished it, but for some reason they didn't nest. 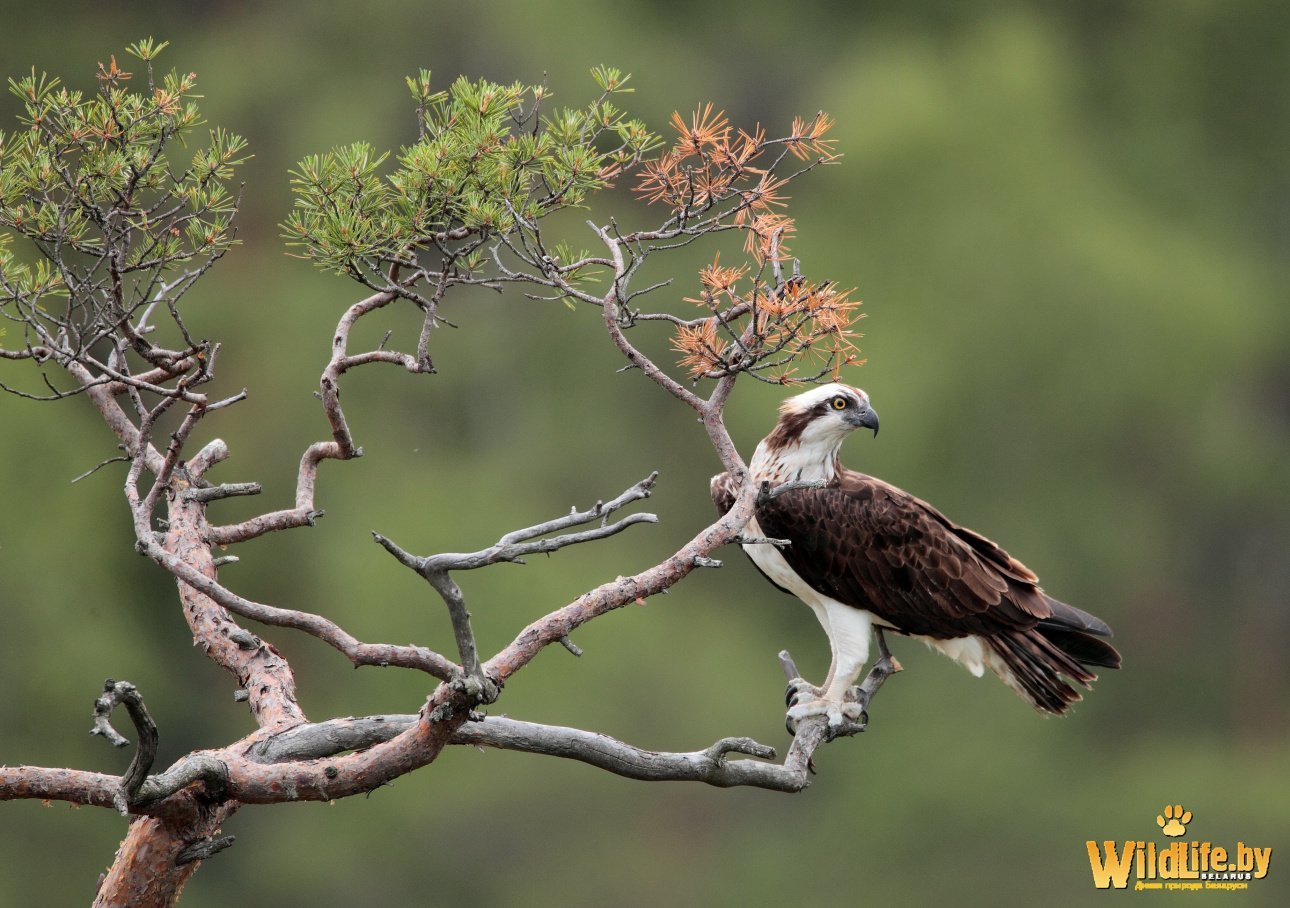 Osprey at the nest. Photo by V. A. Pushkin


In the spring of 2004, the nimble merlins occupied this high-rise nest that I had built for ospreys, and raised four young merlins there. The following year the merlins took the osprey’s nest again. 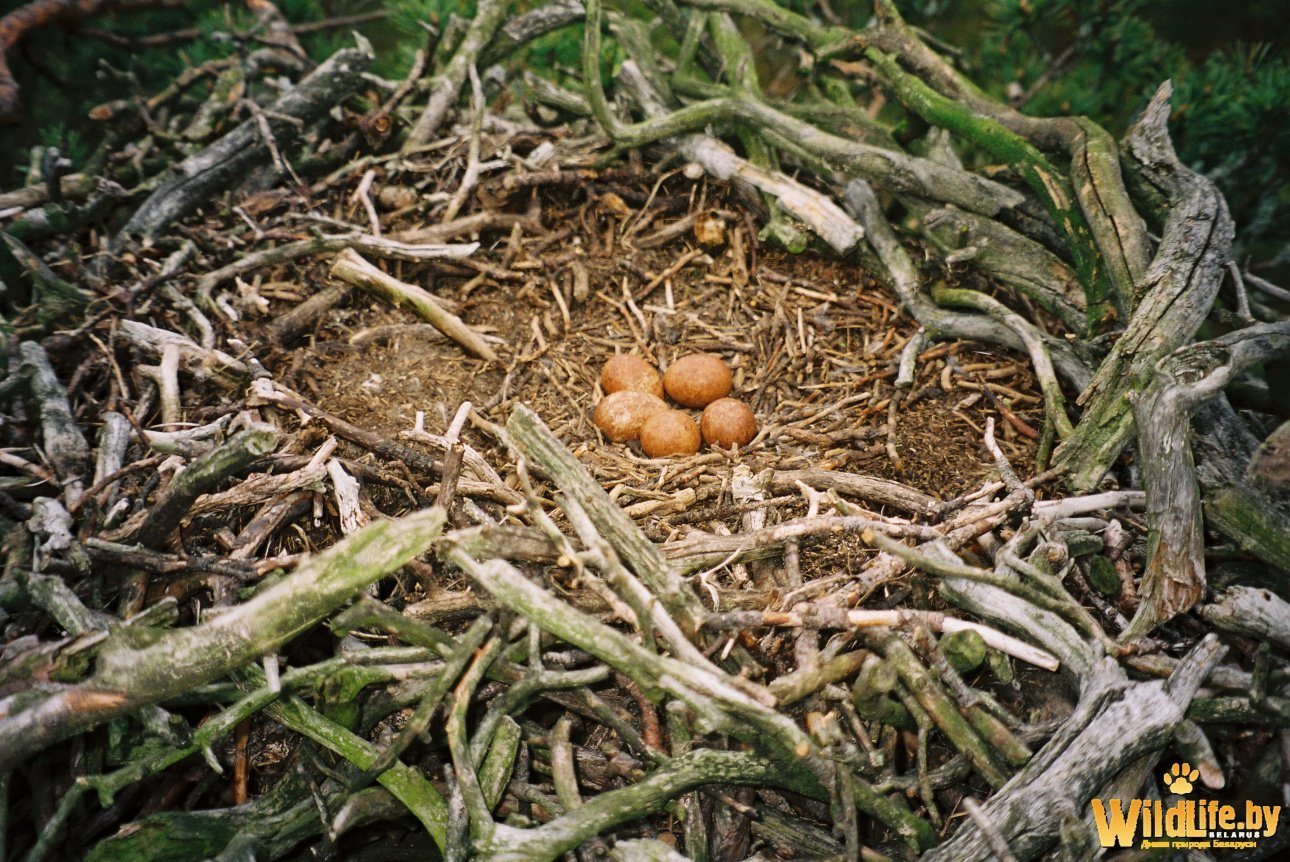 Laying of merlins in the osprey's nest. Photo by V. V. Ivanovsky


But when I came to ring the chicks, the nest that had again been built by ospreys, only contained the shell of the merlins’ eggs. The same way an attempt by merlins to use this nest was also unsuccessful in 2007.

To resolve this conflict, in 2009 another osprey nest was built 100 m (330 ft.) from the first one. Moreover, a white enameled basin was used for the base. And, as you may guess, in 2010, this fresh-built "apartment" was occupied by merlins, but only one chick was raised, though.

In 2011 the merlins occupied this nest again. But their eggs were destroyed, apparently, by a raven.

Merlin chicks in the nest of the osprey. Photo by V. V. Ivanovsky


But the next year the pine withered, and the merlins abandoned it.

Again I helped my fosterling: in 2015 I hung another "bucket-nest” for merlins away from the ospreys on the border of the forestless bog and sphagnum pines. Apparently this time I found the best option, both in height and the distance from the ospreys. The merlins were nesting there successfully in 2016, 2017, 2018, and 2019.

“What about ospreys?”, - the reader may ask. Well, in 2019 the benefit of ospreys finally came: they occupied an artificial “basin-nest” built by me. 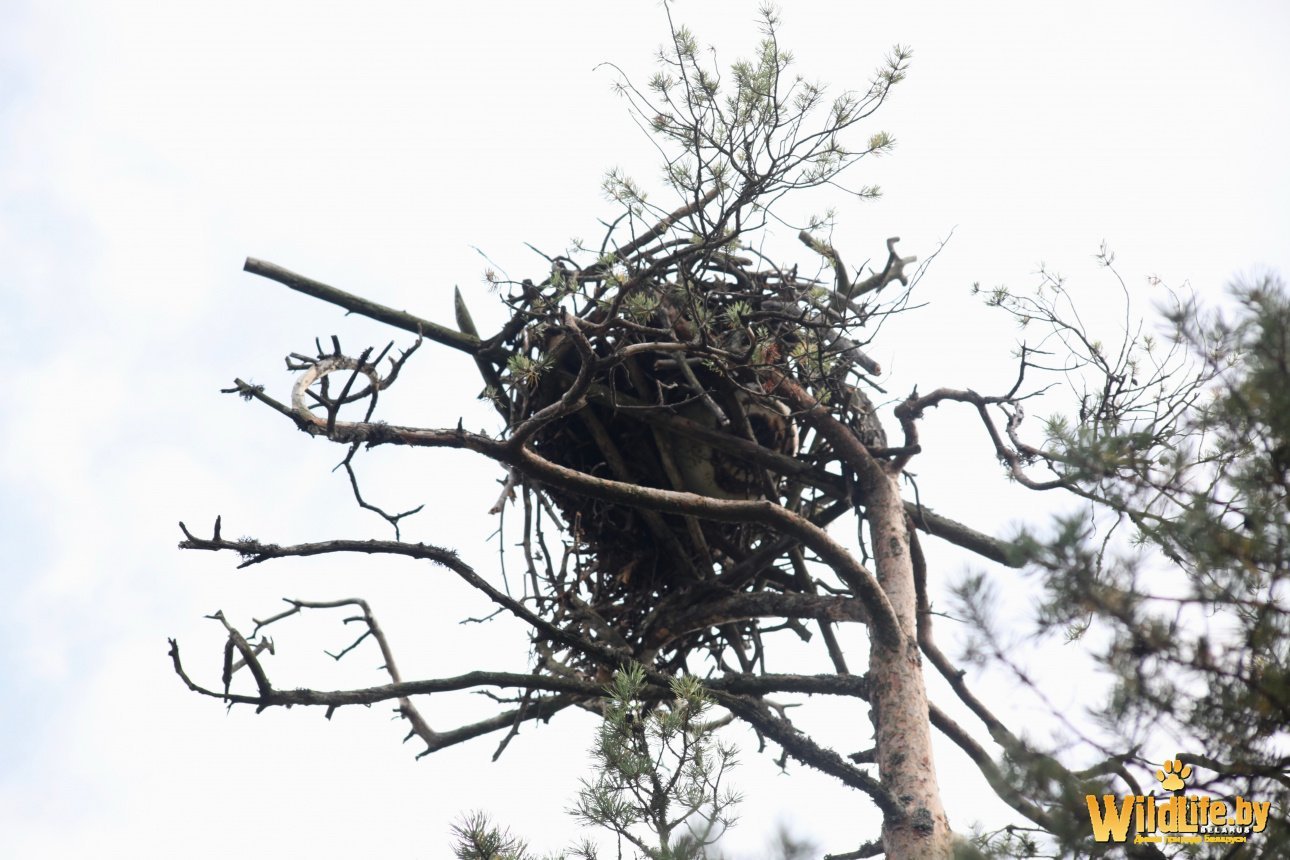 An artificial osprey nest built on the basis of the "basin". Photo by N. V. Saksonova


As I remember very well now, on September 6, 2019, the weather was fine. The merlins had departured long ago, and I’ve just collected the remains of their prey in the nest. From the nest of the merlins I walked to the nest of the ospreys. I saw that my "basin" was completely covered with large dry branches, there was a mass of white droppings under a pine tree, and two young ospreys were hovering in the sky above me. Peace, grace, and joy were in my soul! 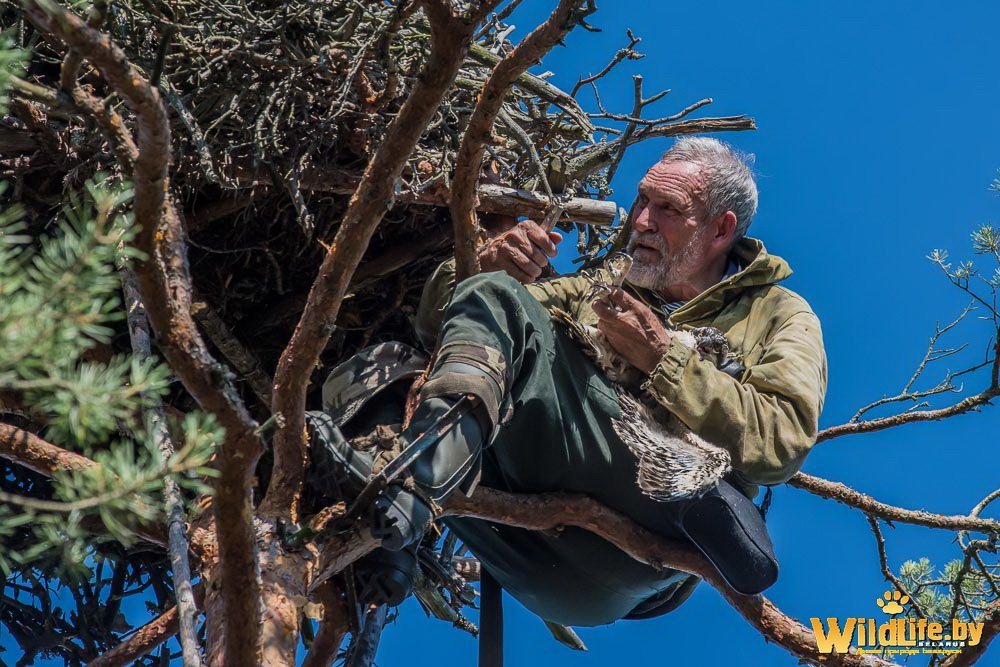