“Moose therapy” against the autumn melancholy

There are places in Belarus where you can escape into the wildlife and at least for a while forget about problems of any kinds. This is not a desertion from reality, but a simple session of psychotherapy, which gives strength and keeps the hope of overcoming all obstacles.

One of these places is Paozyorie wildlife reserve and its surroundings in the Vitebsk region. The one where there is a large population of moose and where you can watch beautiful scenes from their lives.

We went on a photo hunt with Oleg Selyakh before dawn. The chances were minimal: there was a strong wind blowing, sometimes it was raining. But you can't sit at home, if you find yourself on the outskirts of Belarus and have a mood to work!

The morning photo shoot, as expected, was not very effective. But we have found a worthy moose bull! However, he was about four hundred meters away, and there was no way to approach him in an open space. We decided to use hunting techniques: I took a position, Oleg had to go around the rapeseed field and go to the moose from the opposite side. But the bull disappeared behind the hill. I moved three hundred meters to the right and waited…

A female moose with two calves appeared all of sudden. 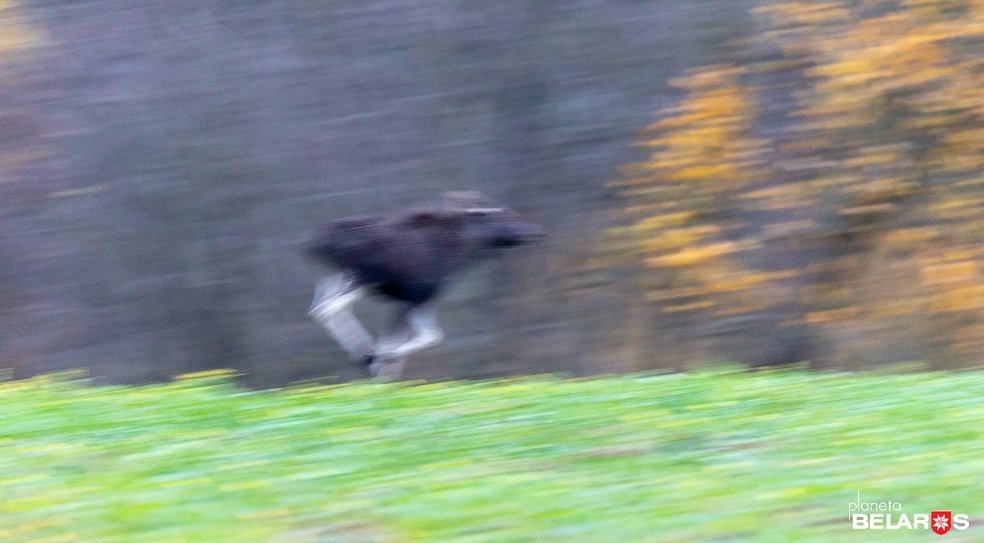 In motion, the shots turned out to be blurry, but interesting in their own way. 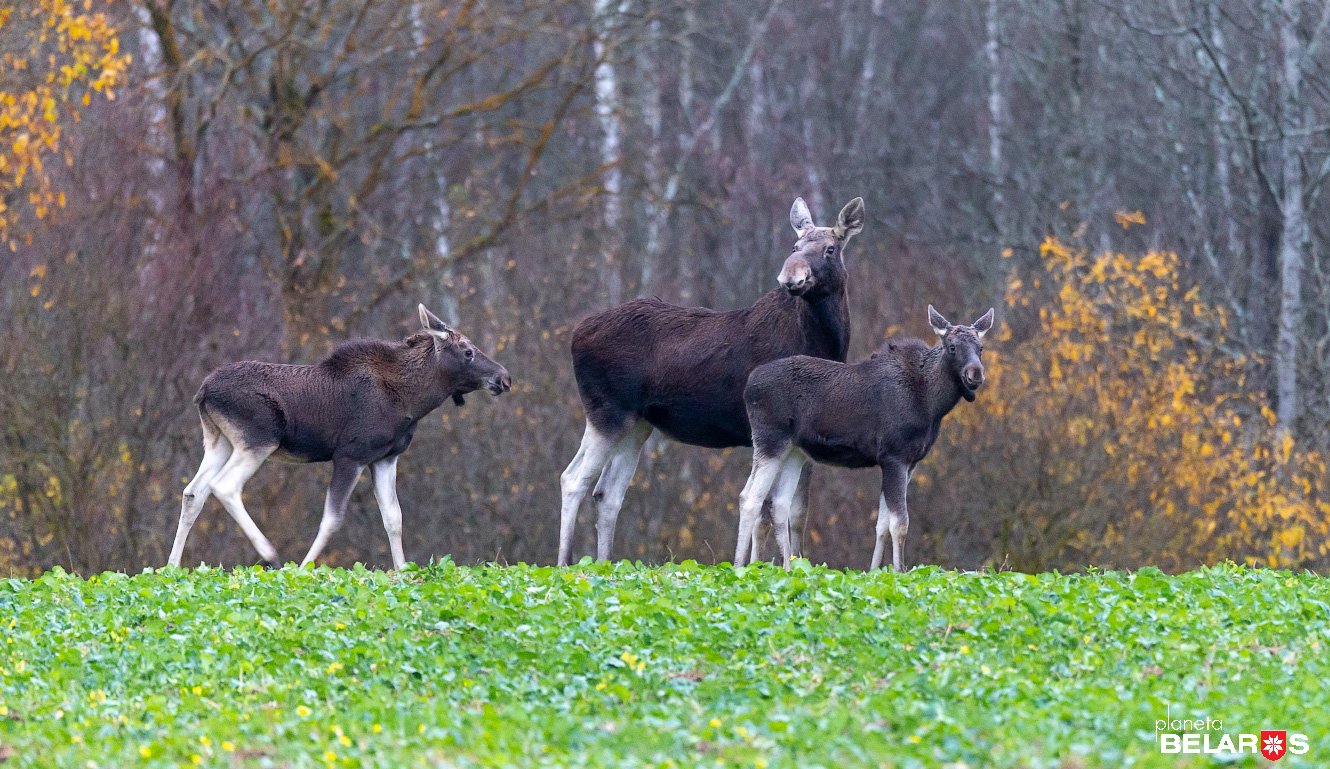 But when the animals stopped for a few seconds, it became possible to take their pictures against the background of not yet fallen leaves. There was a hope that a bull with antlers would also come out here, but this did not happen.

After lunch I already knew where to go. Oleg was busy, I had to rely only on my skills and luck.

I left the car and began to approach from the leeward side to the field, where a moose with big antlers was spotted in the morning. And my expectations were met! 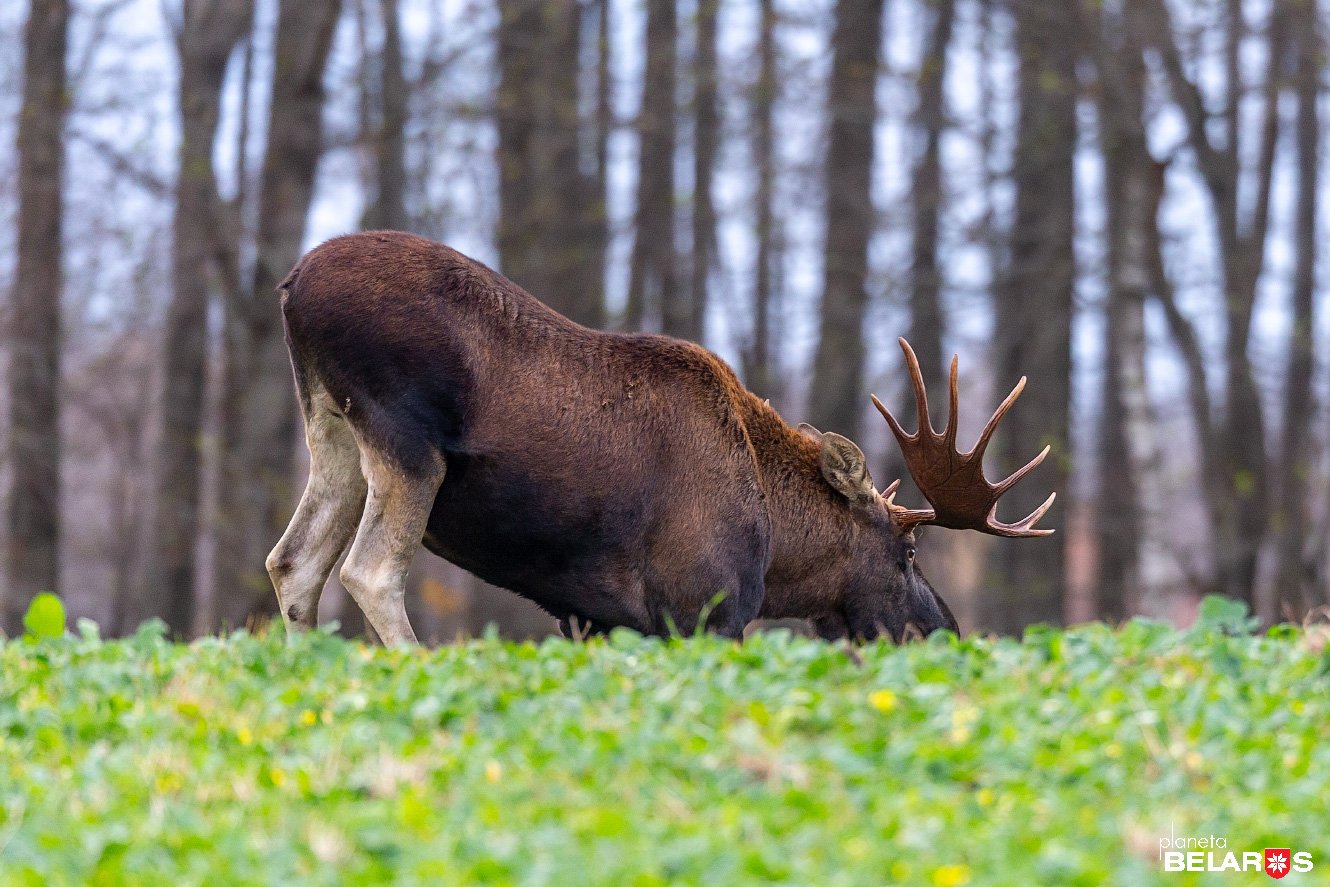 The moose was feeding almost in the same place. Gradually, he moved over the hill. At times, only the antlers stuck out from behind the hill. 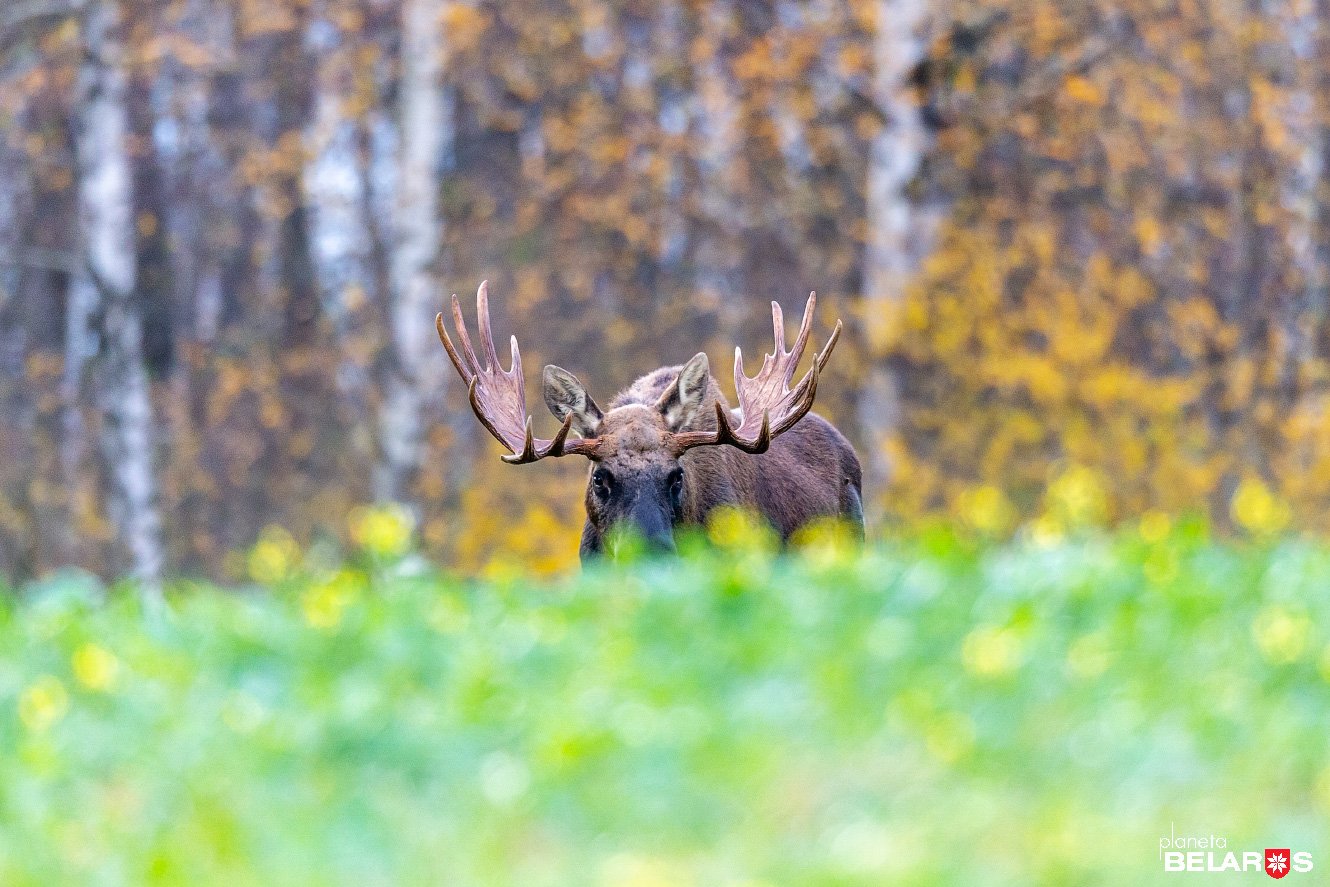 I decided to walk along the edge of the field, but I saw that there was also a female moose lying behind the hill. There was nothing to do but stand waiting…

This went on for about forty minutes. The bull was feeding. The female was resting. Finally, some motion started on the field – a female roe deer jumped out of the forest. And headed in the direction of my moose. 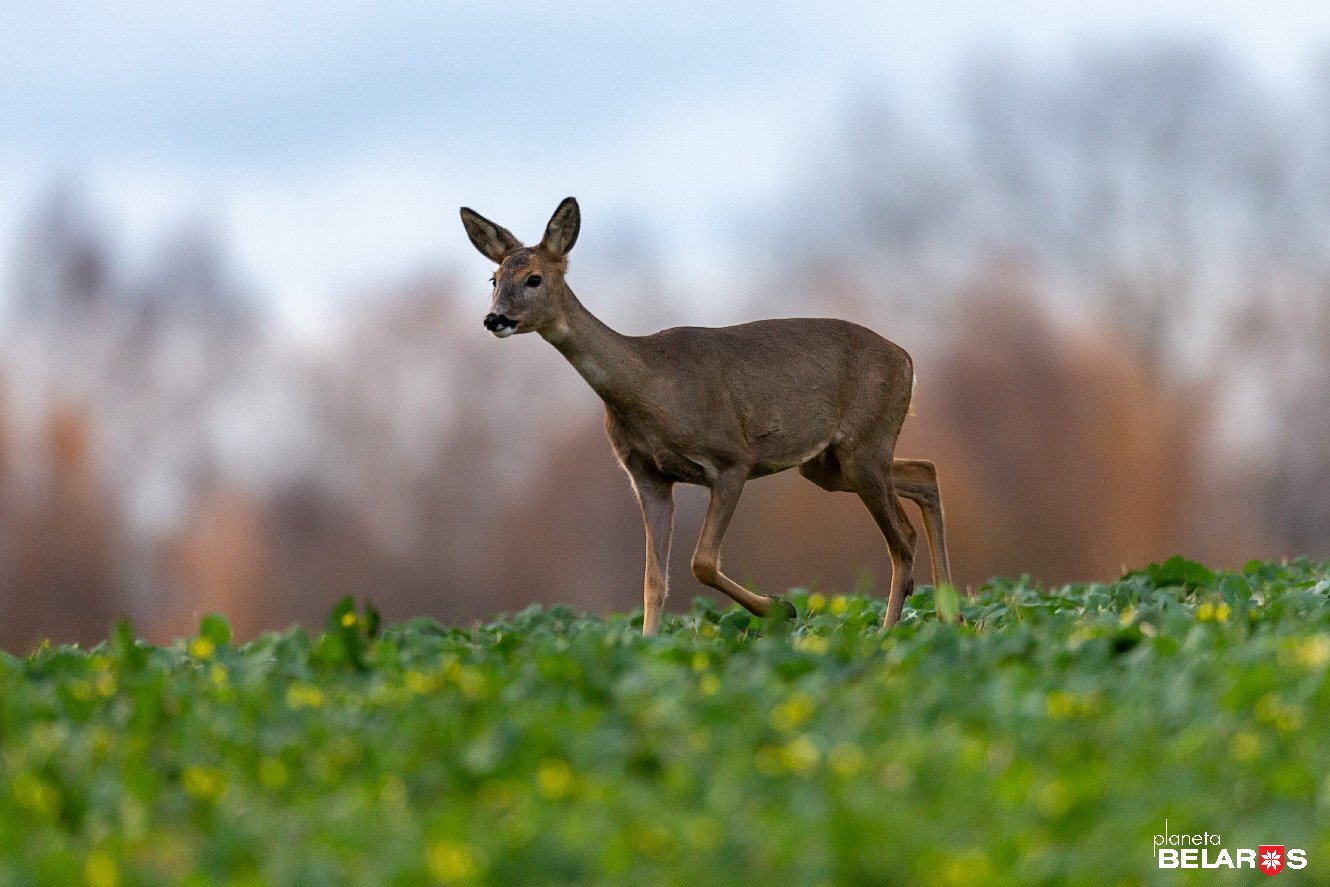 I was staying motionless, the camera was on a tripod, a long jacket hanging on the tripod was hiding my silhouette, the wind was blowing from the animals towards me... The conditions were perfect for making a good shot! But the bull didn’t seem to like my greenish spot, he didn't approach it in any way, while the female moose was just sleeping. 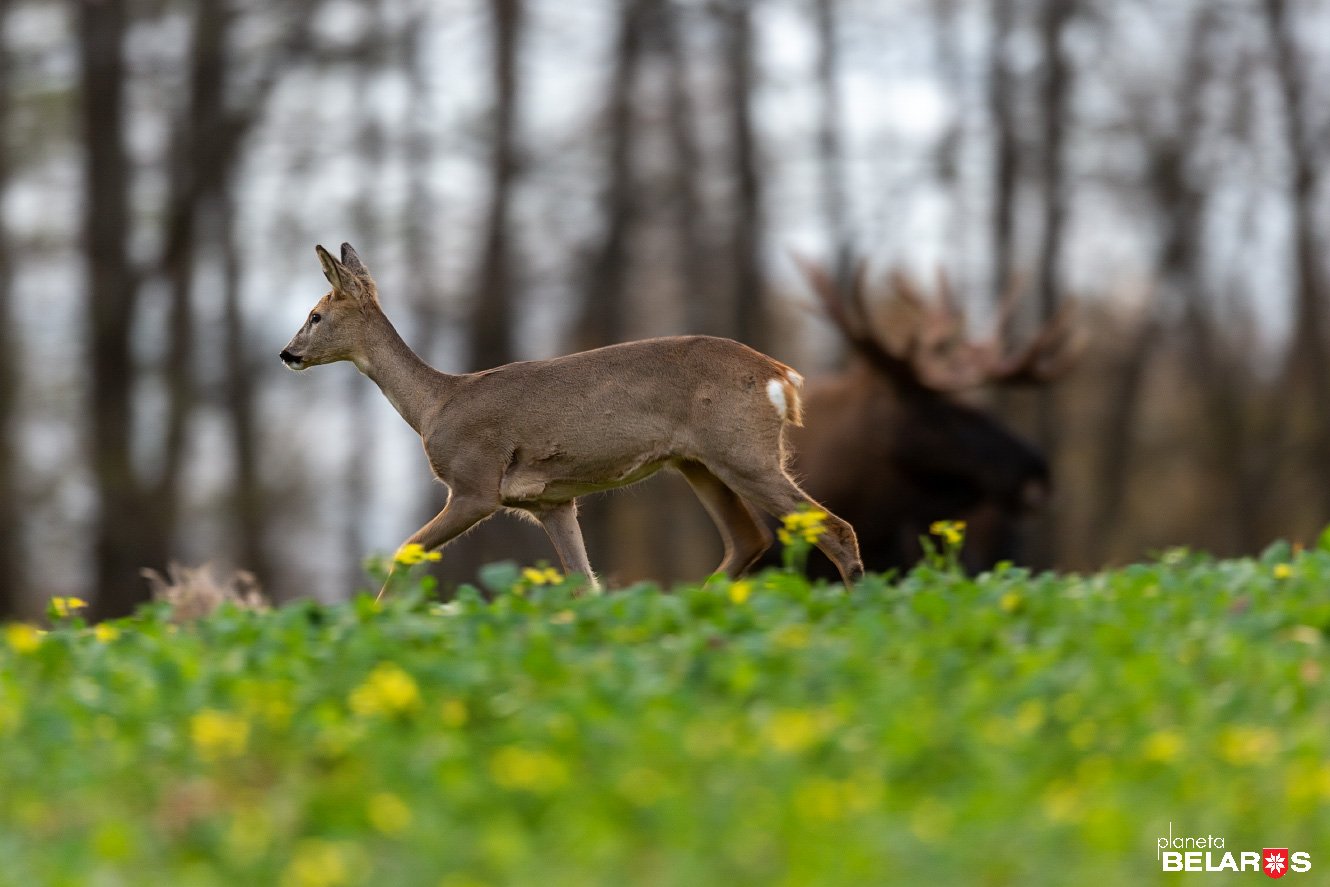 But the roe deer passes by the moose bull, and I photograph it against the background of massive antlers.

Then I resumed waiting for another thirty minutes. 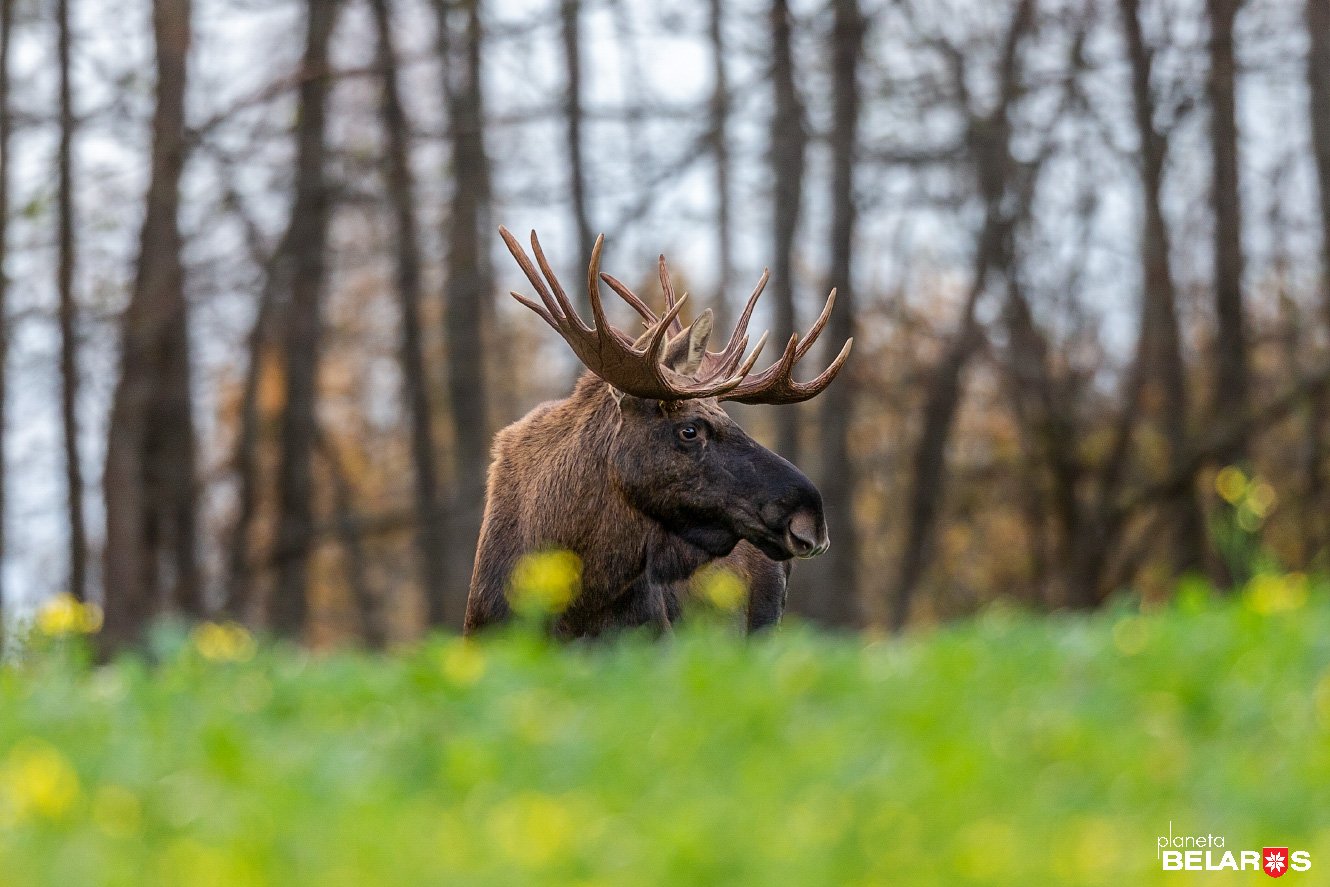 But I am determined for the result, I see the goal – and I am ready to stand here even until darkness. 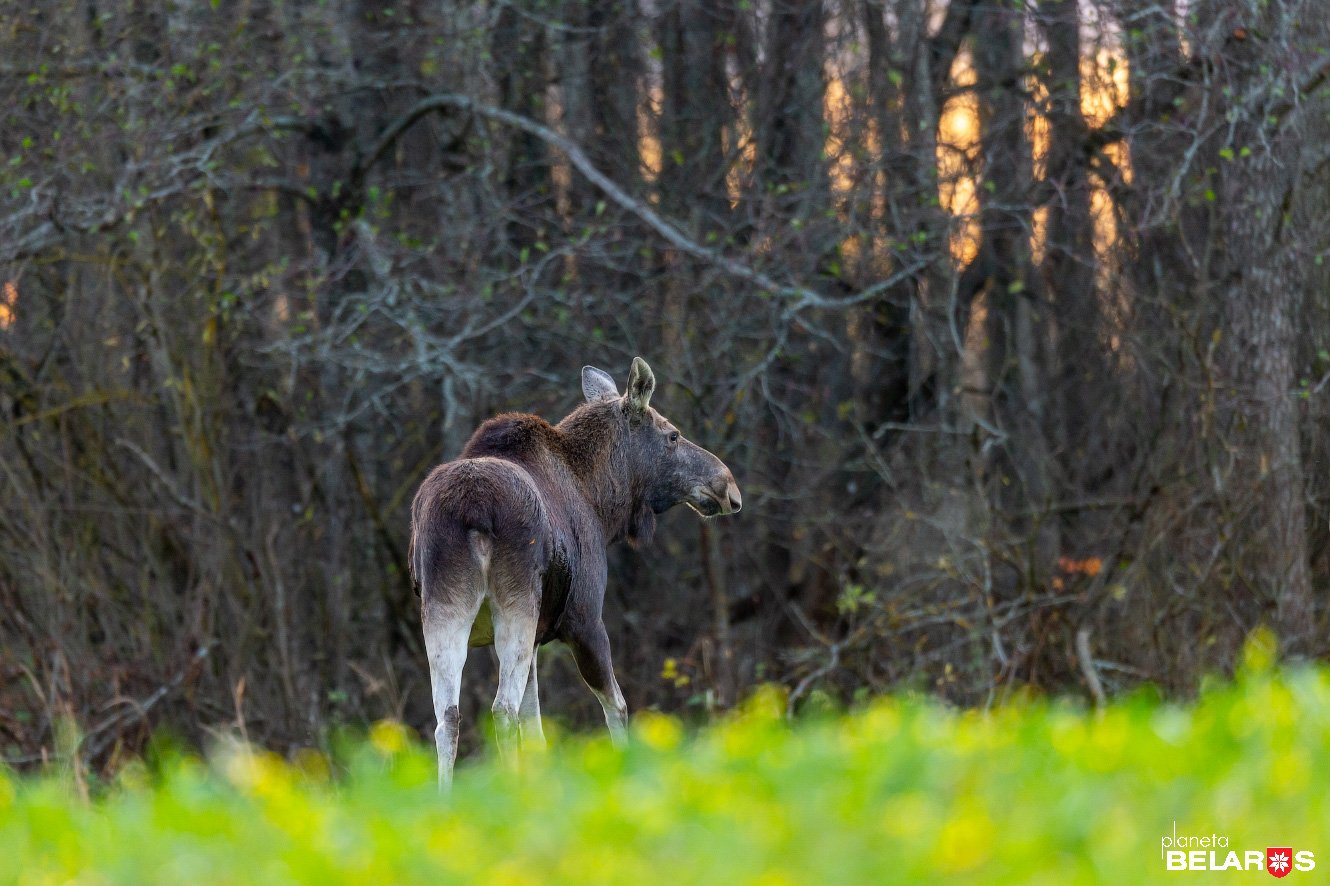 Finally, the female moose gets up and looks in the direction of the bull. 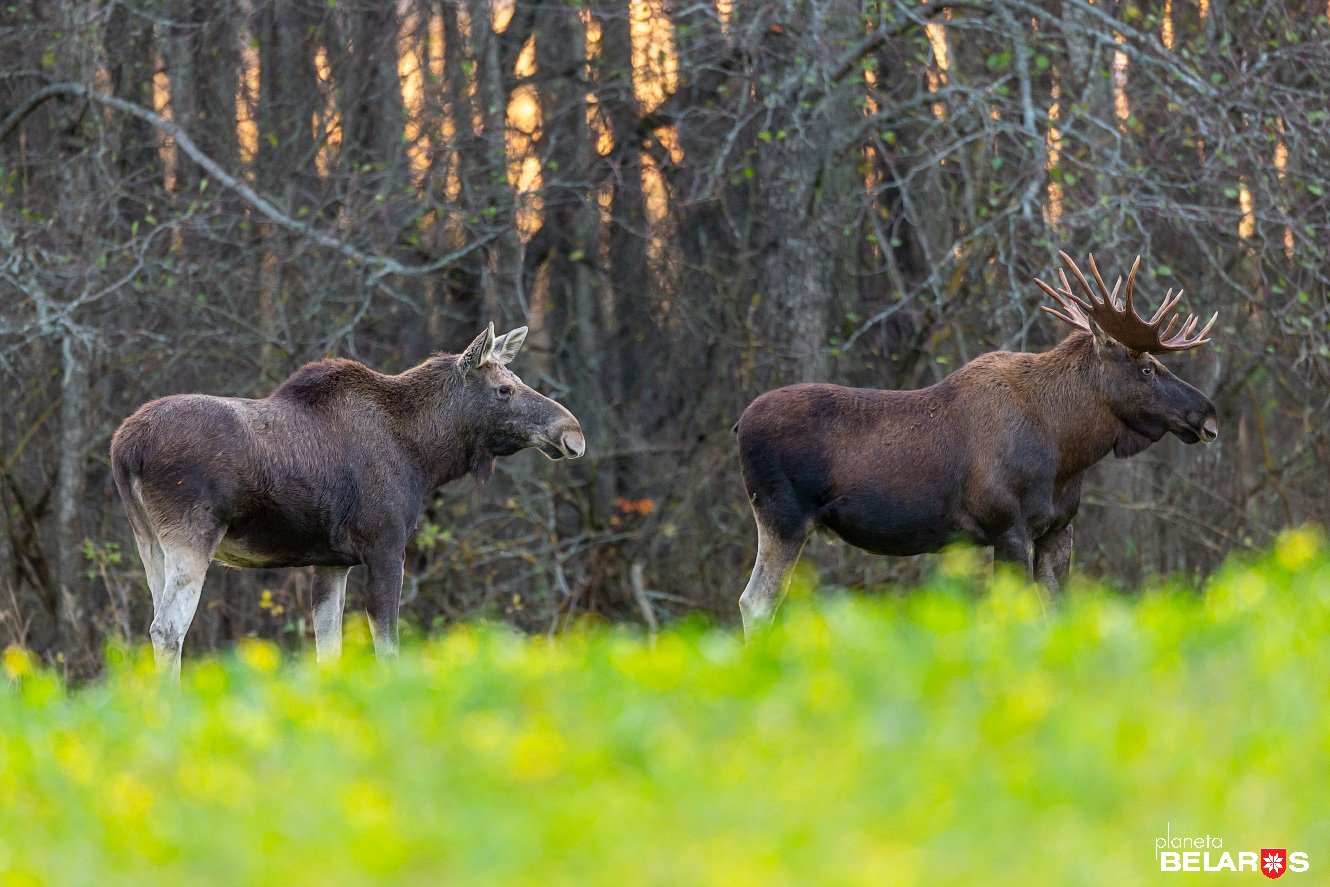 The bull approaches her, but again nothing happens: the animals are just looking in the same direction. 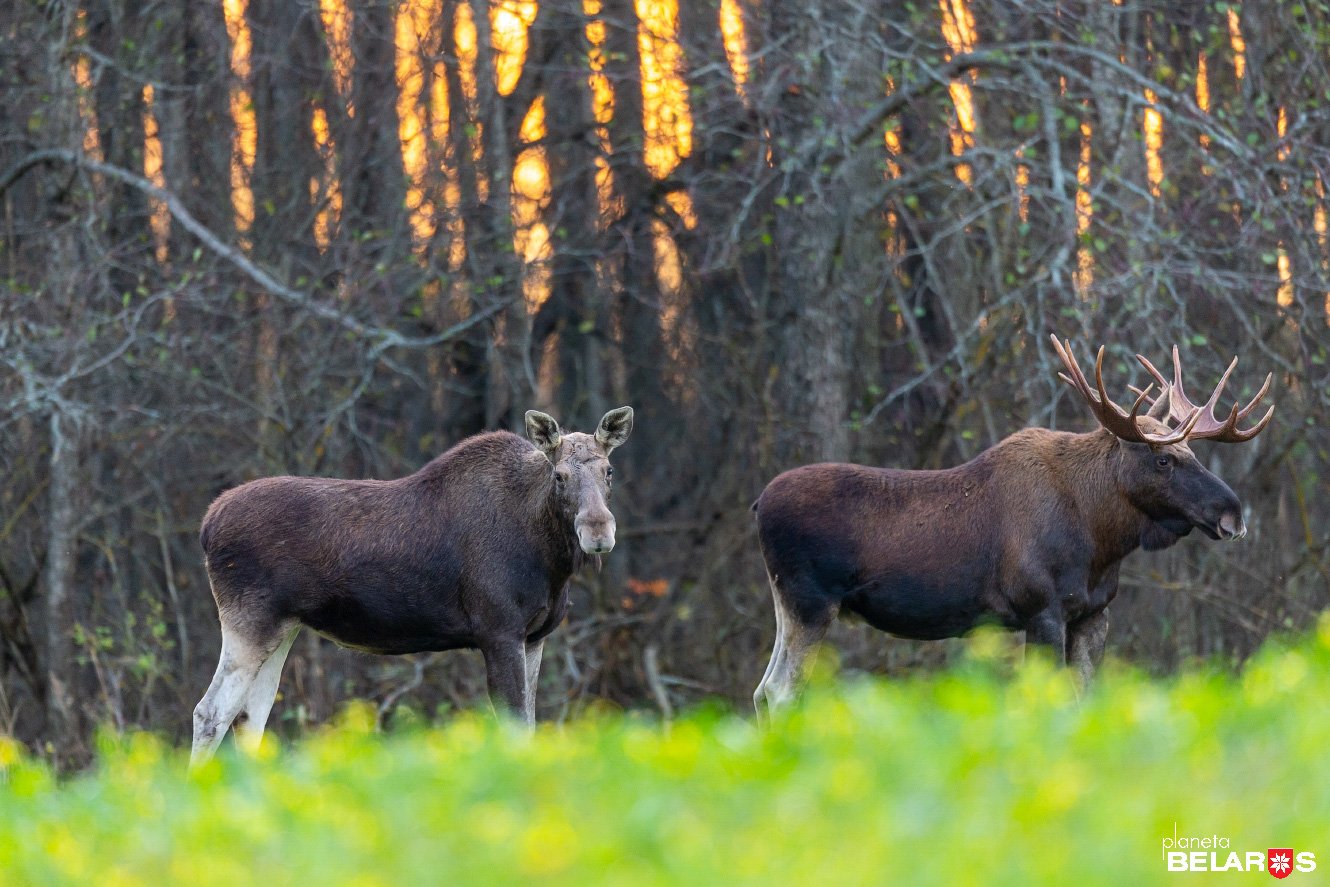 There are twelve minutes between these frames!

I understand that they don't like my presence. But during all this time I have not made a single sudden movement. And the wind is still favorable. And the sky in the west is turning pink. I would like to shift a little bit to pick up a more interesting background, but it is too risky in such a situation.

I am still waiting. And some interesting half-moment appears! 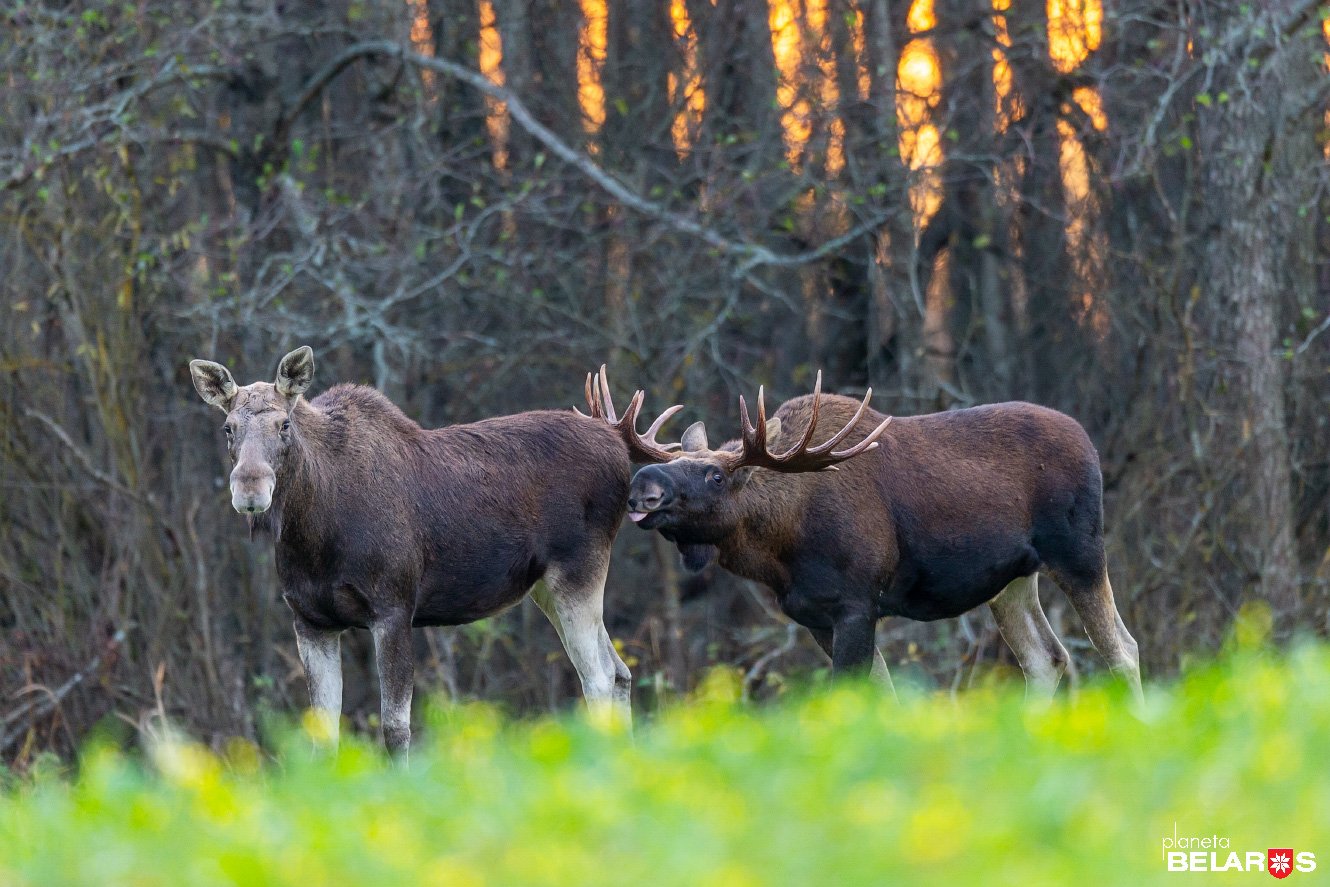 The bull is demonstrating interest in the female, while she is looking in my direction. 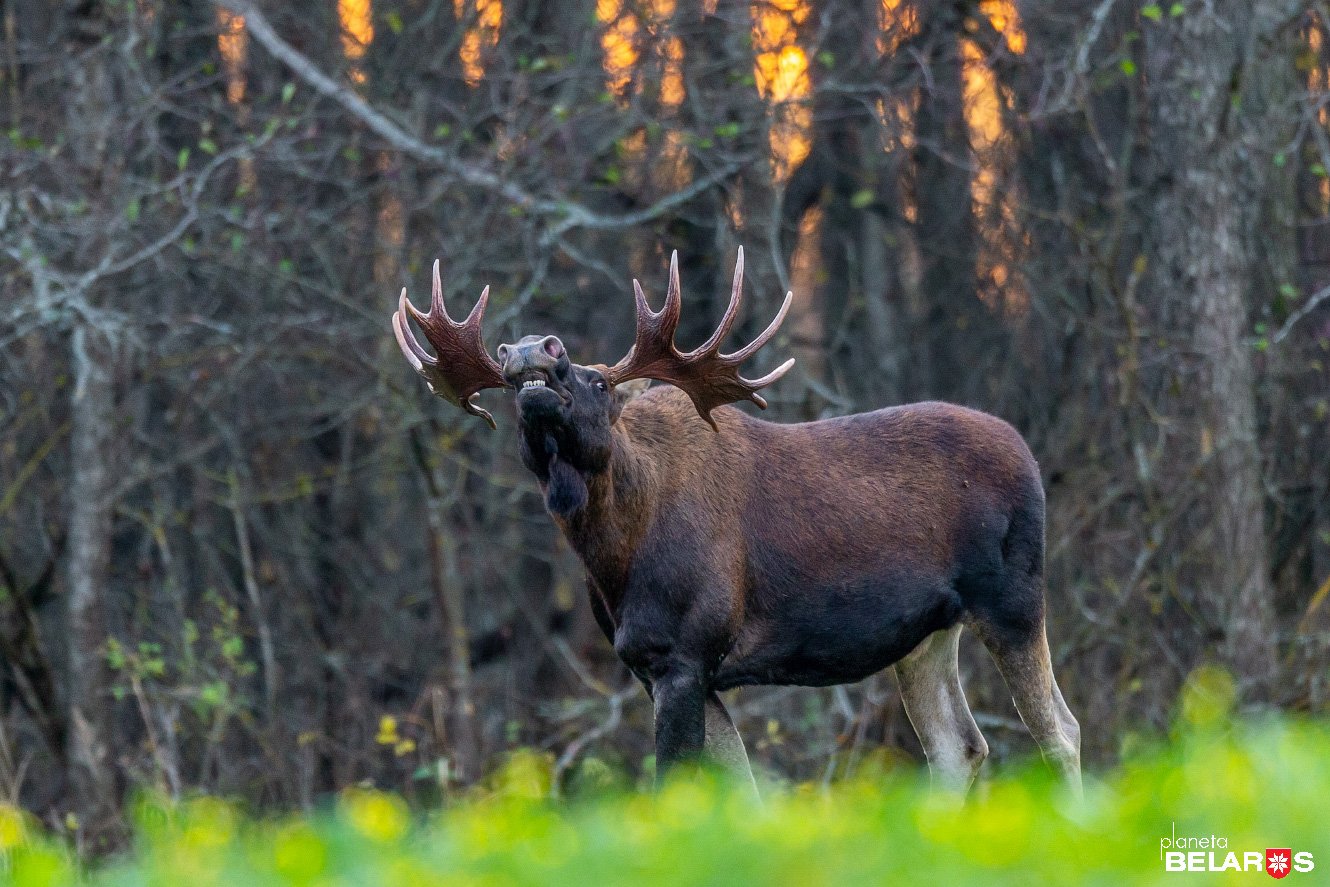 The bull moose is sniffing the air, and the shot turns out as if he is moaning. In general, this is a typical male pose for the mating period. The value of the image is also increased by the sunset sky breaking through the trees. 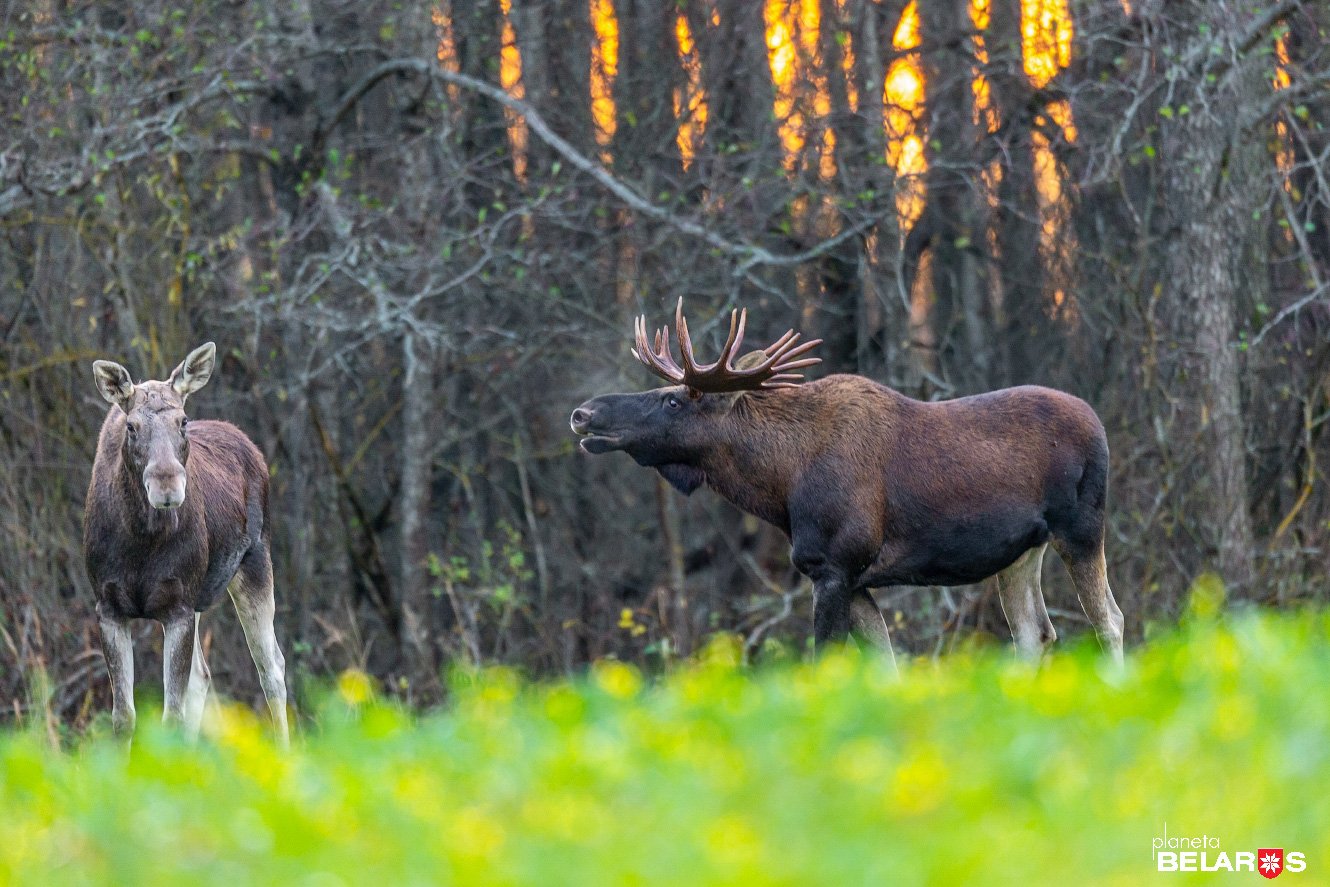 The bull approaches the female again, but her attention is still focused on me. If Oleg, who knows how to talk to animals, had been here, the shots would probably have turned out much more impulsive. But what we have what we have... 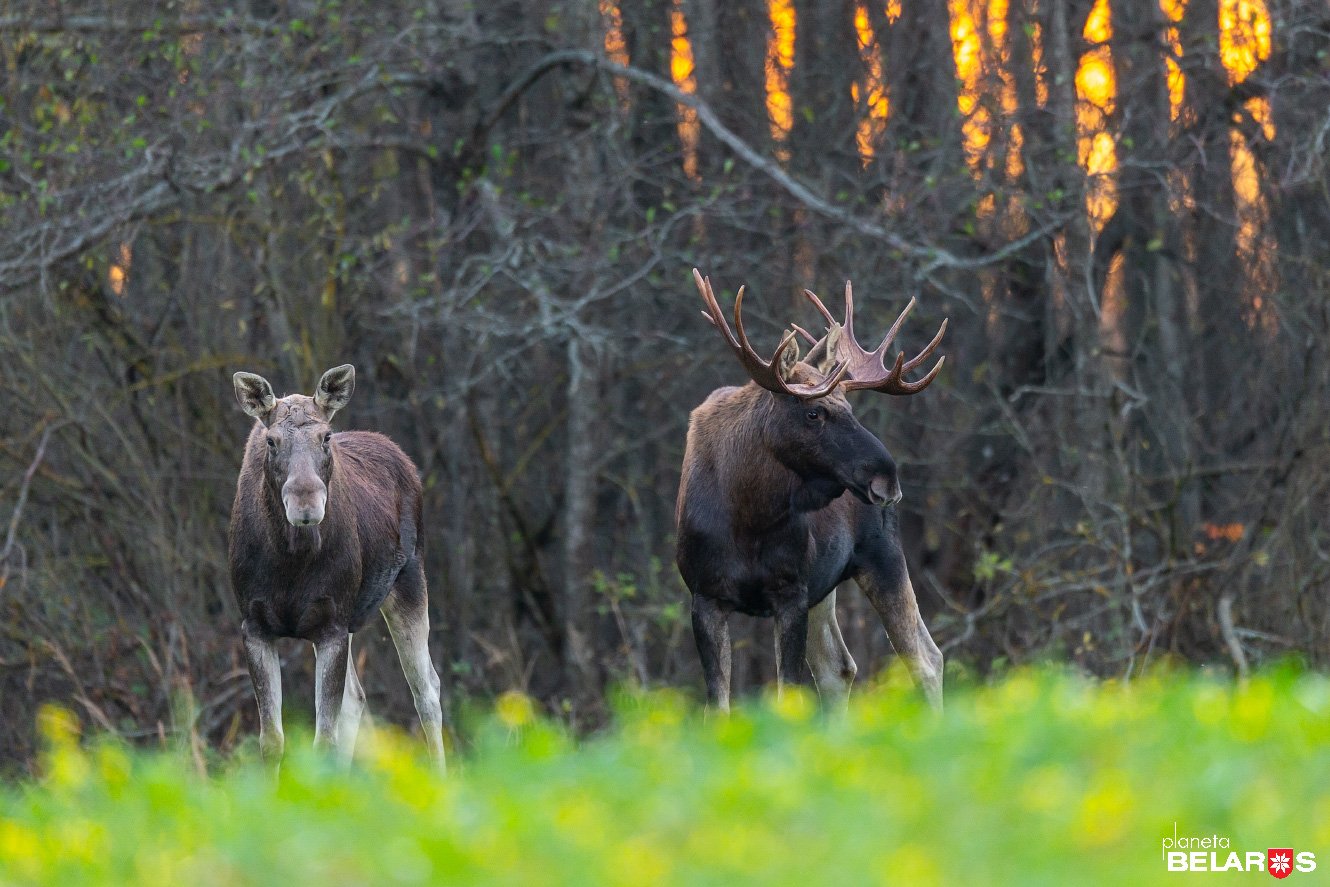 I watch the sky turning purple, but this beauty is a little aside. 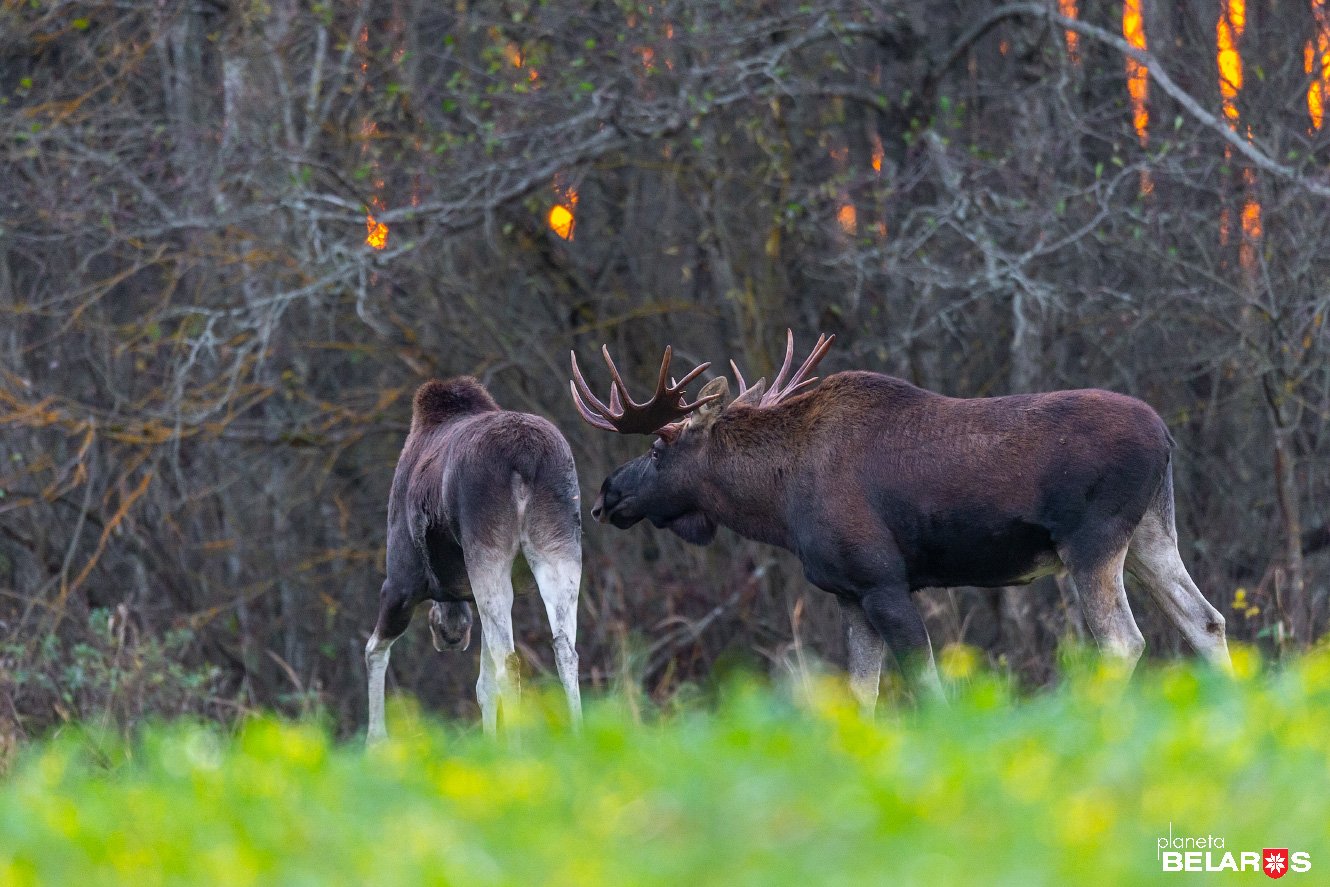 There are only small red spots between the trees behind my models. And the animals absolutely do not want to move anywhere. 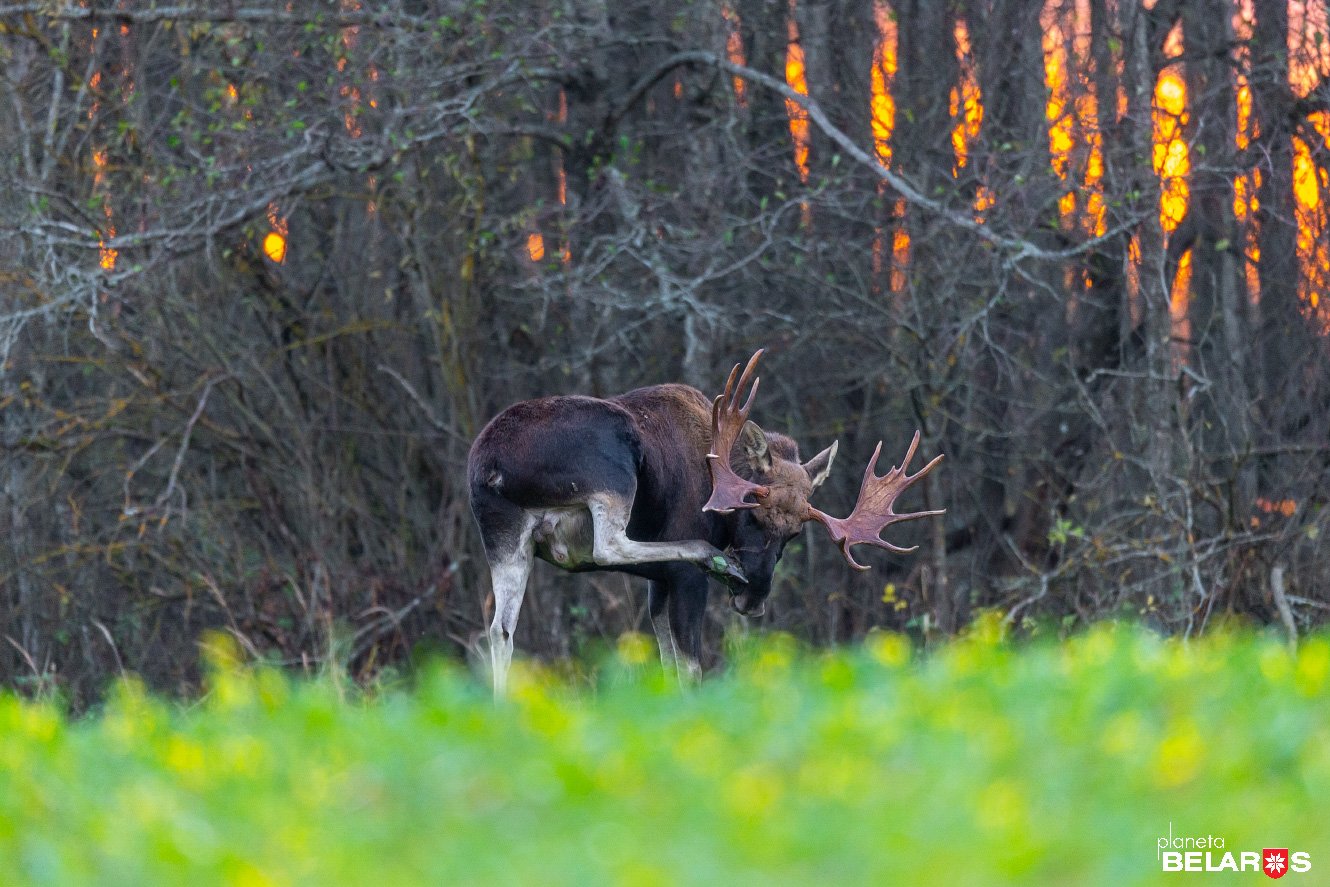 A couple of times the male scratched his nose with a hoof approaching his beauty. But it gets dark very quickly. 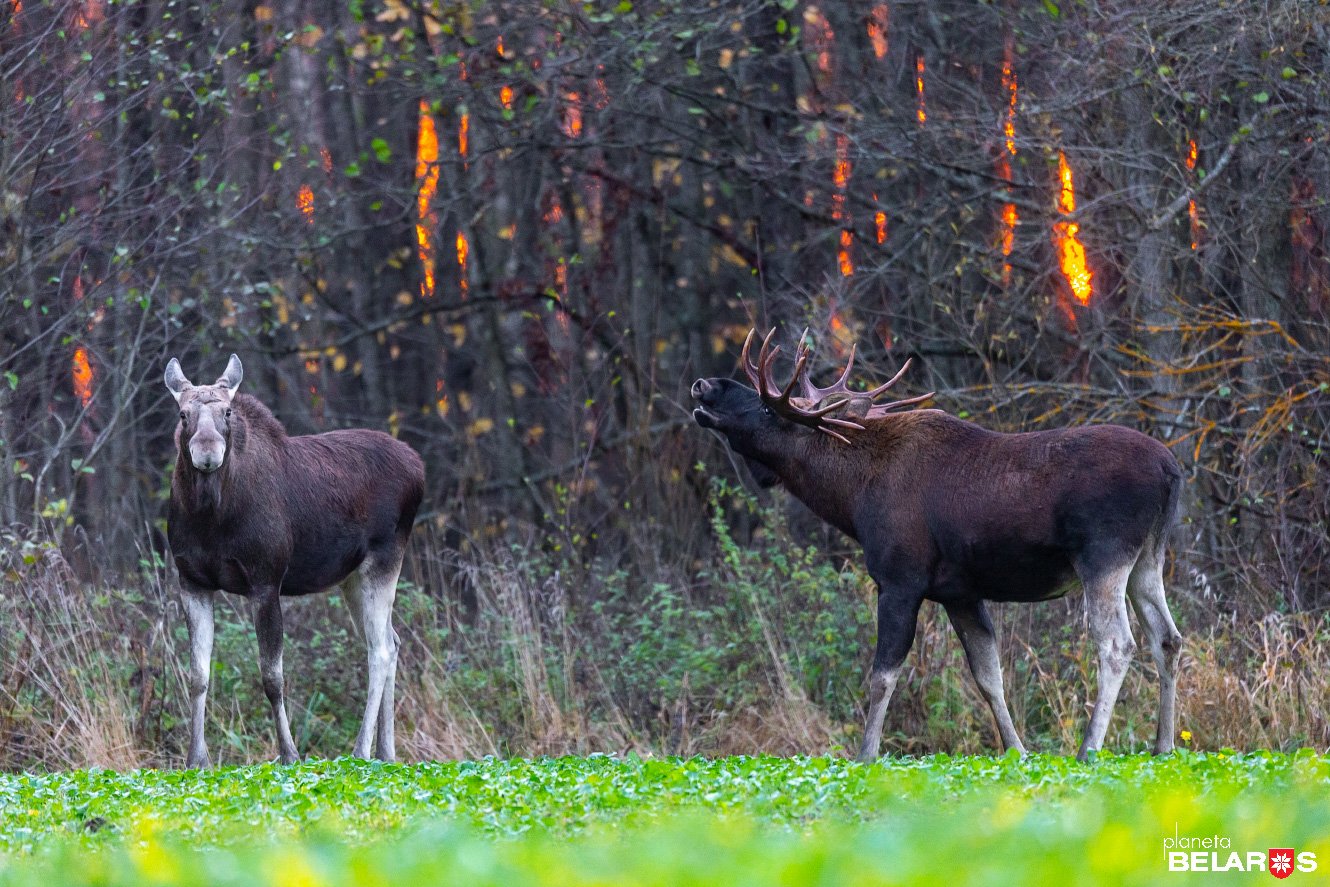 I take the last shot for today and slowly, slowly move away, holding a tripod with the camera and the jacket in my hands. I haven't scared the animals away. Tomorrow, perhaps, it will be possible to make the best shots…

On Sunday morning we are going together with Oleg. Now we know exactly where and how to take pictures. And the weather is great! The animals went out into the fields. To the left and right of the road we see moose – we stop, look at the quality of the horns and move on. We need the biggest male!

I have a sporting interest; I start counting the moose I saw. We skip twenty-five animals in search of the best plot!

We leave the car at yesterday's place and go to my field.

Alas, the familiar moose with big antlers is not there!

Another moose is seen in the distance, we go down to the edge of the field and walk around the hill. In theory, the moose should be somewhere nearby - so we keep moving, observing all precautions.

We cross a small swamp, go out to another field, but we see nothing. And the weather is perfect! The dawn sun illuminates the rapeseed field and the nearest yellow bushes, which could be a good background. If there was someone to take photos of…

We walked about a kilometer, I have two cameras with long-focus lenses and a tripod in my hands, the total weight is significant. So when we realize that the plan failed, I suggest Oleg go back to the car, while me myself walk to the nearest road.

Behind the road there is another field, from which three roe deer are running away. 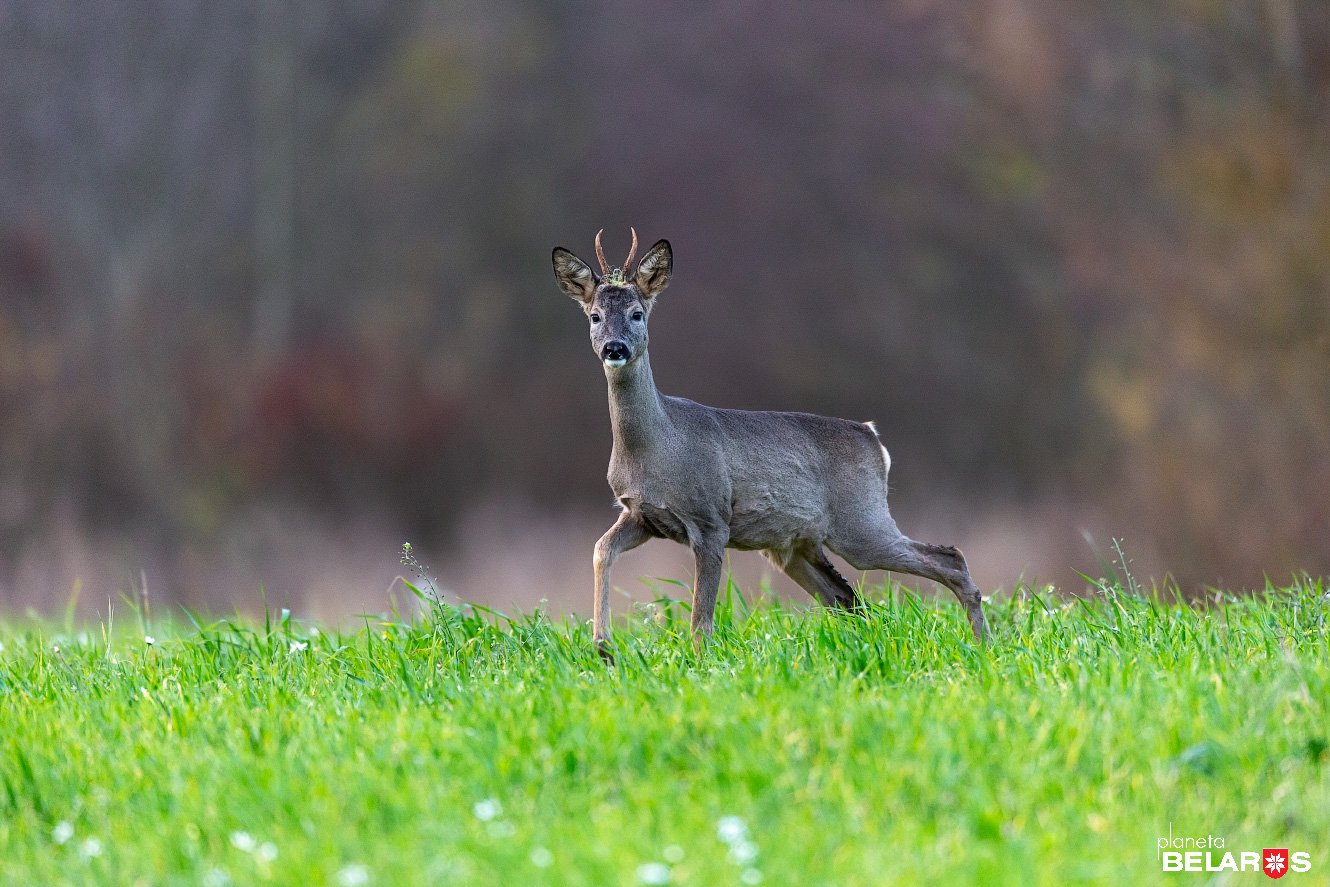 In the distance, a male roe deer appears from behind the bushes running in my direction.

Everything else is a matter of technique. I manage to put the camera on a tripod, wait for the male roe deer to approach, and start taking many photos: it turns out to be forty frames. I will delete most of them later leaving the best ones. 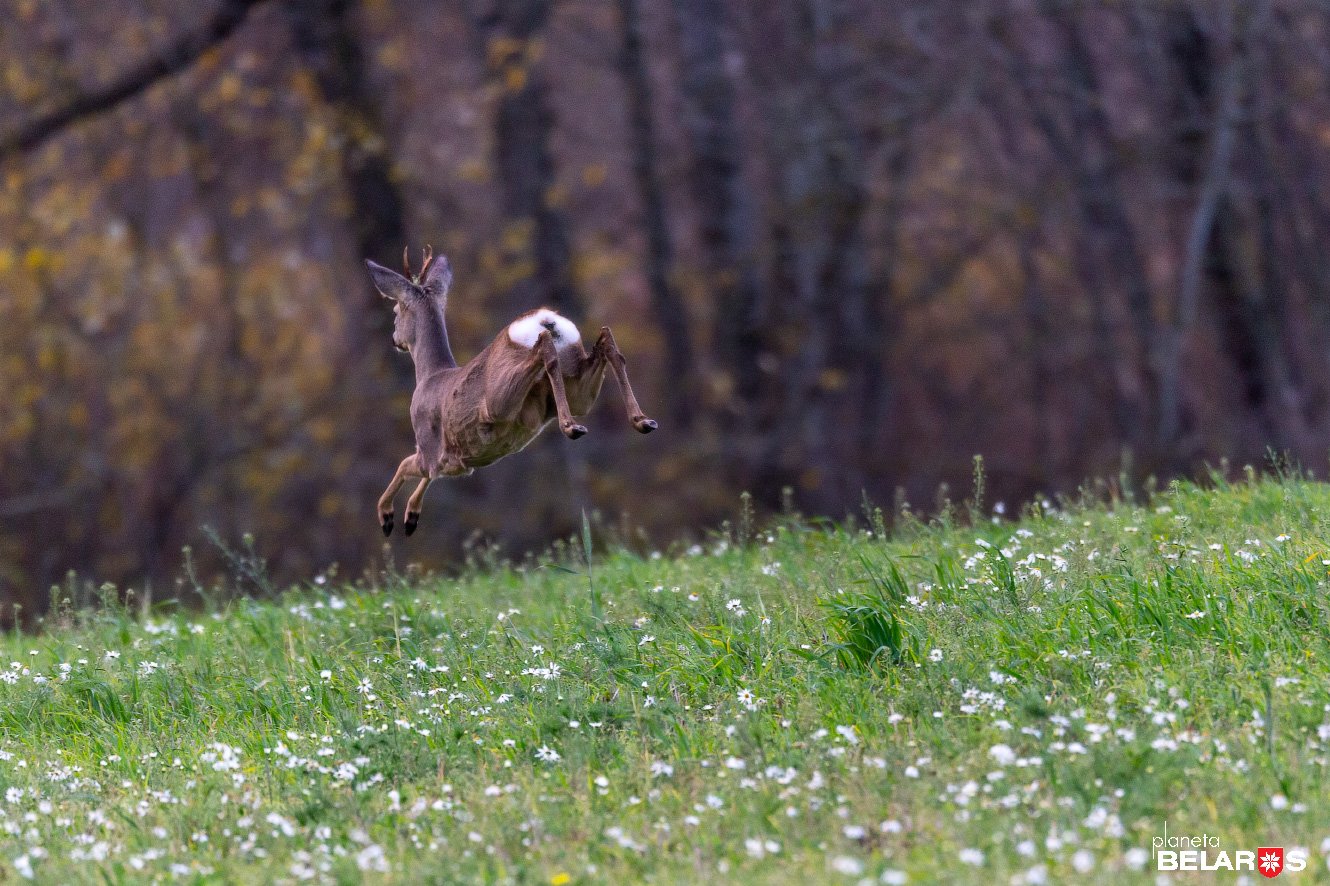 In fifteen minutes I hear the sound of a car, Oleg drives up, and we move to other fields. It's almost nine o'clock in the morning, so we choose the most remote areas. 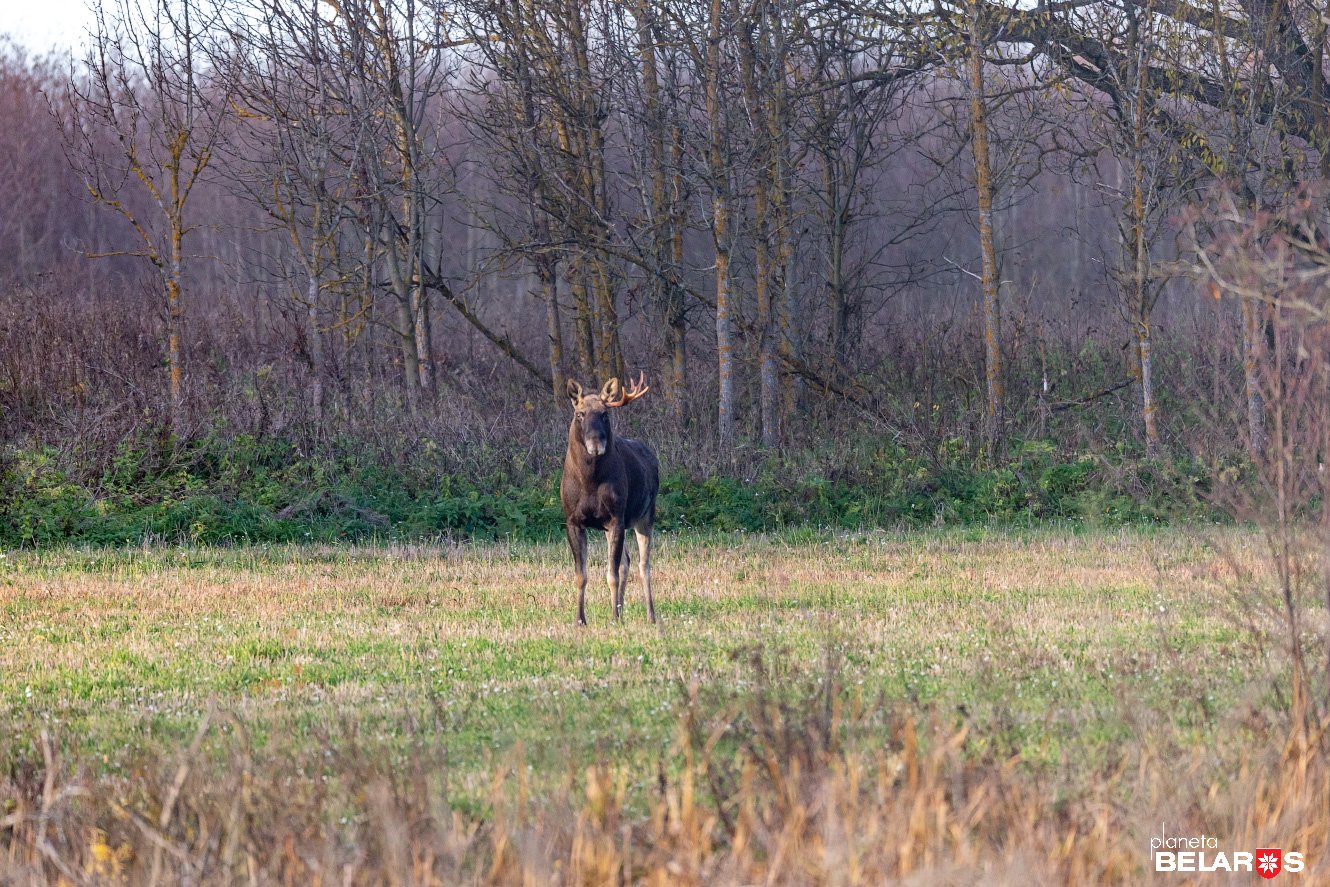 We find a one-antler male moose. But the problem is that he is lying on the field behind the swamp. You can't go right up to him. It is useless to go around to the right: the forest is nearby, so he will immediately rush there. The only option is to go around in a circle on the left and approach the moose from the forest.

So we do, but we stumble upon a female moose with a calf. 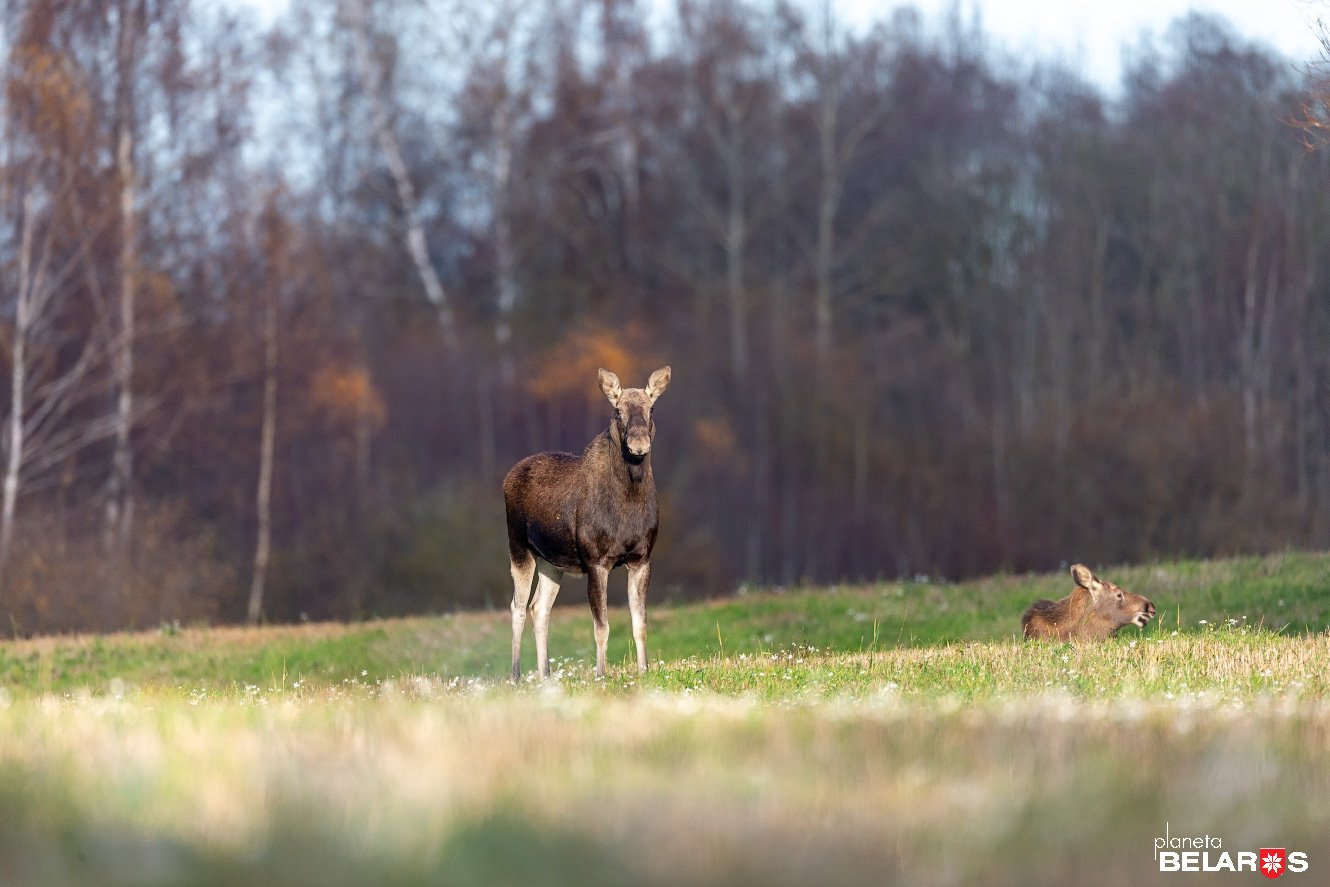 Now there are very few options left – just slowly to go around the animals, hoping that they are not too afraid of cars.

But the female moose does not want to pose and runs towards the forest. We are much more interested in the one-antlered moose. He is rushing into the swamp that was separating us about fifteen minutes ago. And two more bulls with antlers are behind him!

The animals stop in a small thicket. We need to solve a tactical problem again. Oleg is trying to imitate the mating call of moose, but animals don't react. We make a decision: I get out of the car, we don't turn off the engine, Oleg will be waiting until I install the camera on a tripod, and drive around the swamp on the left. Fortunately, there is such an opportunity.

Five minutes later Oleg finds himself on the opposite side of the swamp. I can hear the moose starting to knock the water with their hooves, but they can jump out into the open space anywhere. 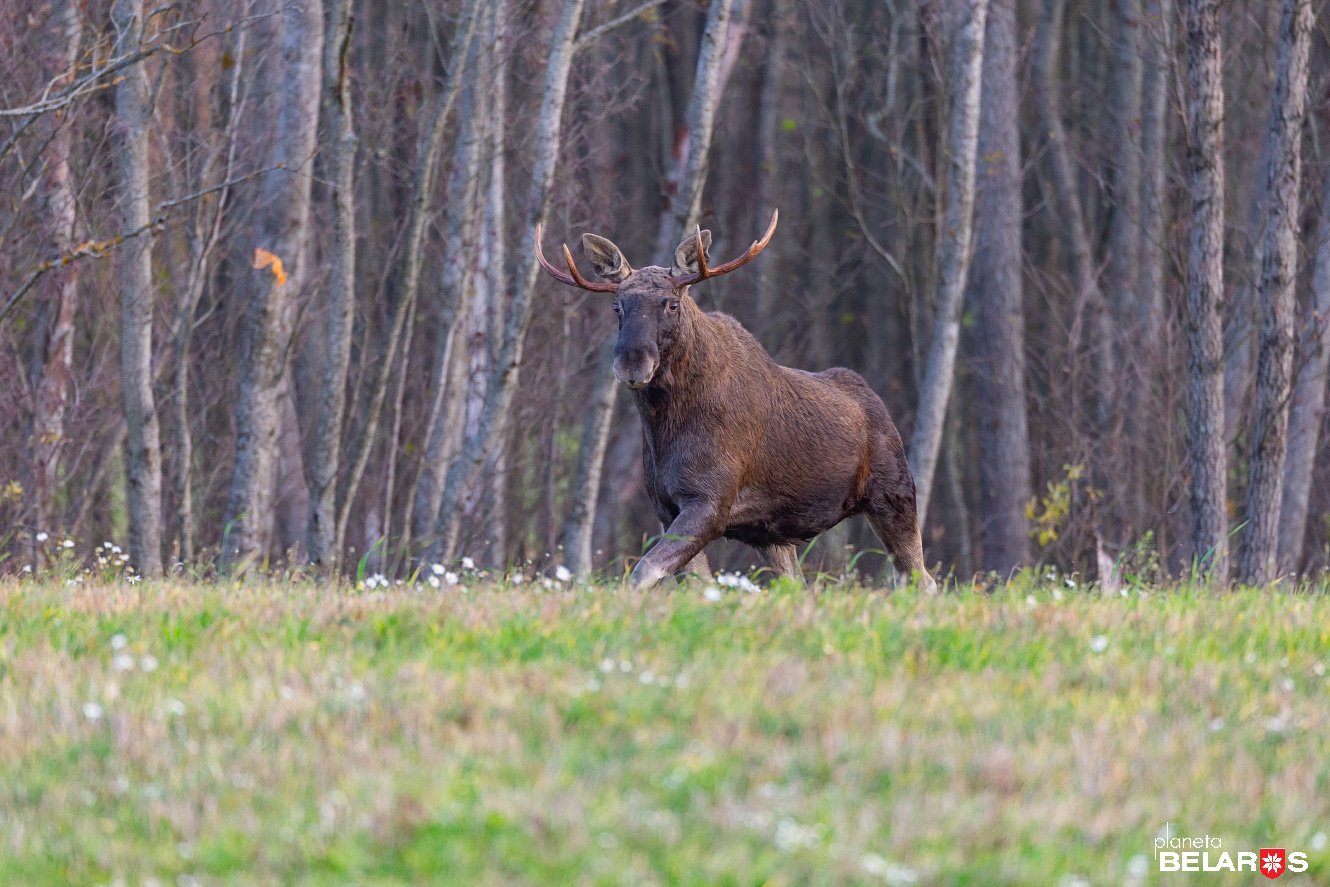 Our plan is working. I'm shooting the first bull. 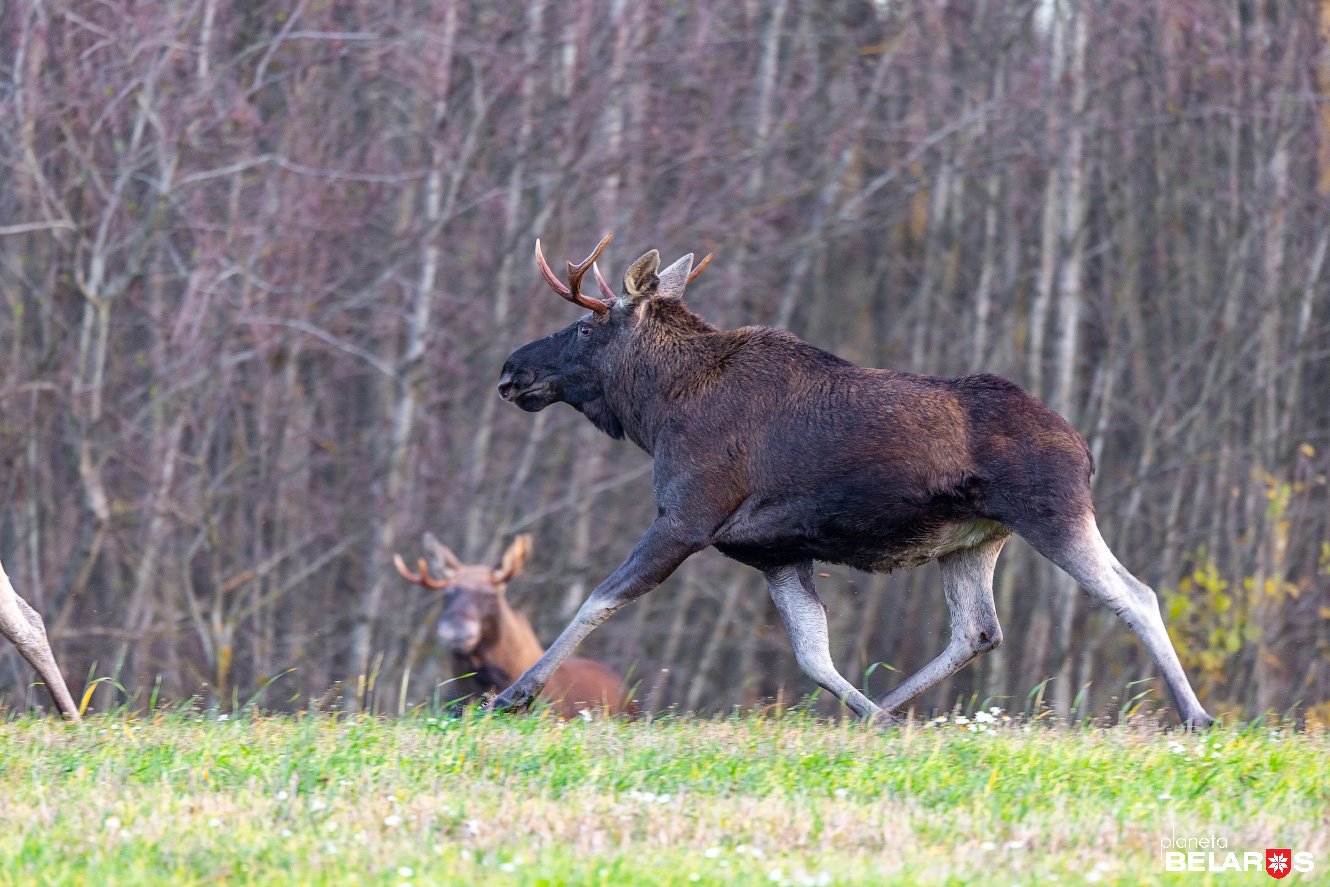 The second and the third ones appear behind him. 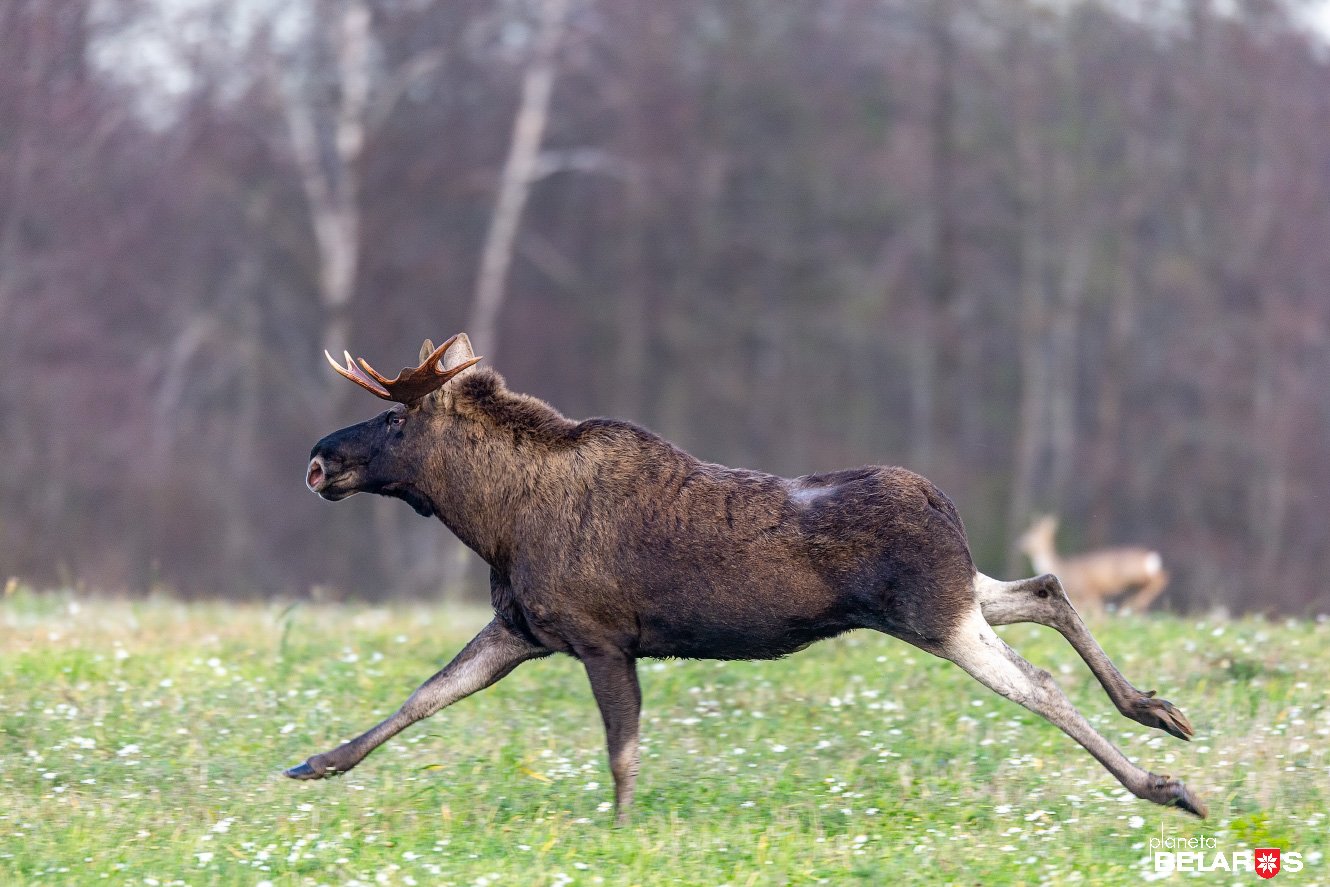 In the distance, a roe deer is running away from the swamp. 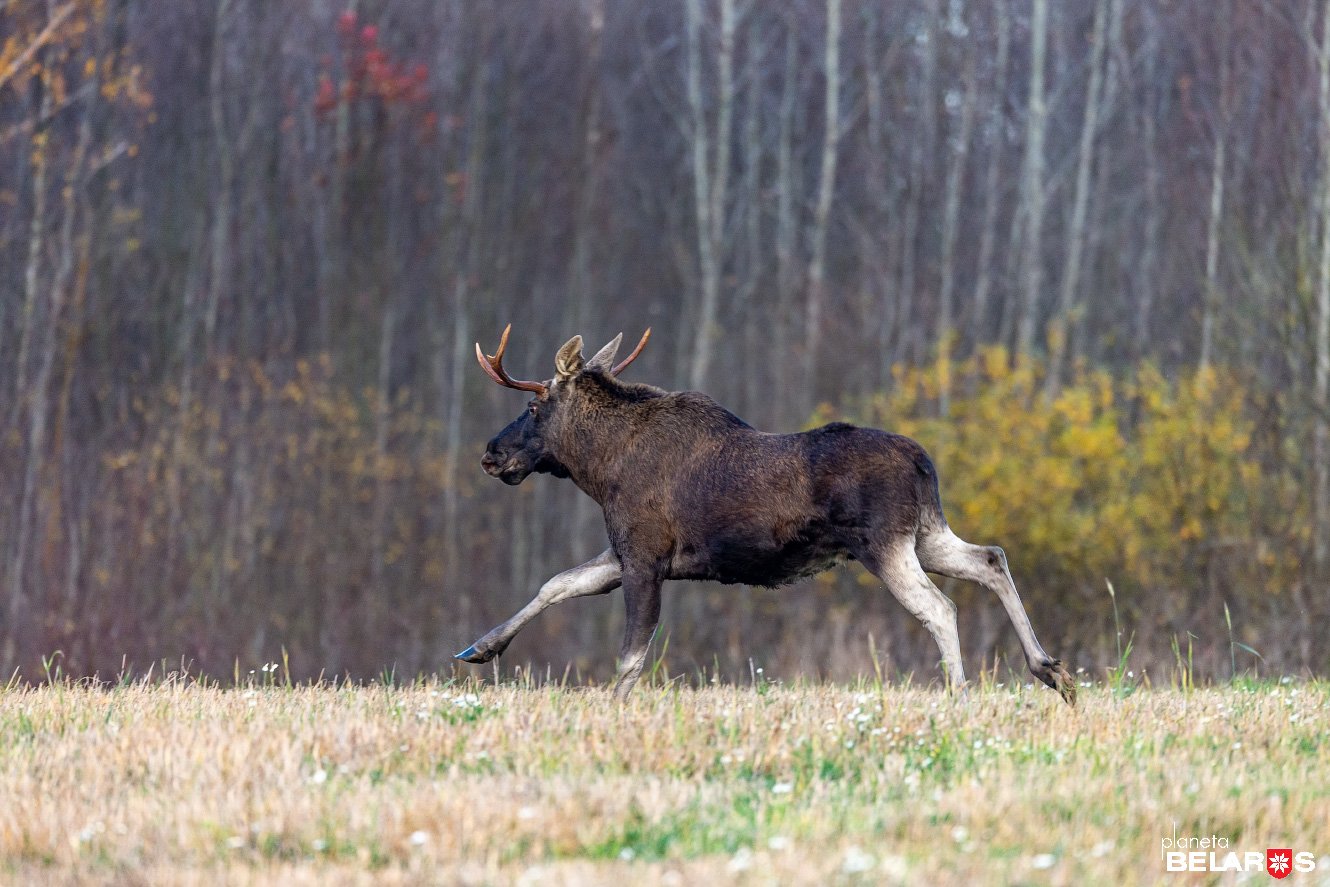 The animals cross the field at a great speed and hide in another swamp. Oleg returns saying that two moose, including a one-horned one, have also run in his direction. 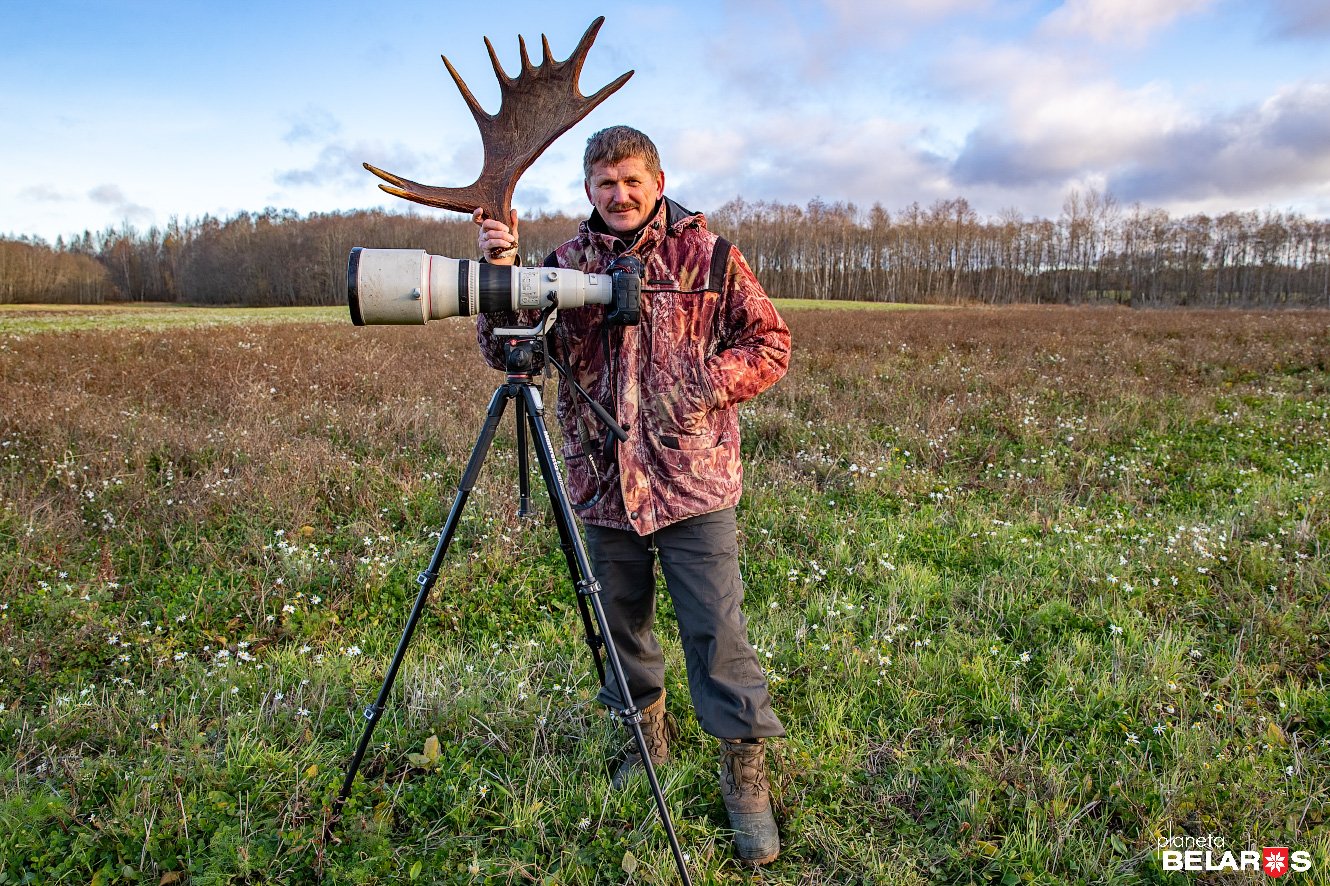 And at this moment I find the dropped antler with eight appendages.

A pleasant end to the morning photo hunt!