The miraculous Stviga River and the floodplain of Pripyat

We continue to explore the territory that the ancient Greek historian and philosopher Herodotus once called the sea. Although, the lowland of Poliesie has changed a lot for many centuries, even now it has preserved some absolutely wild spots. One of them is the floodplain of the Stviga River. 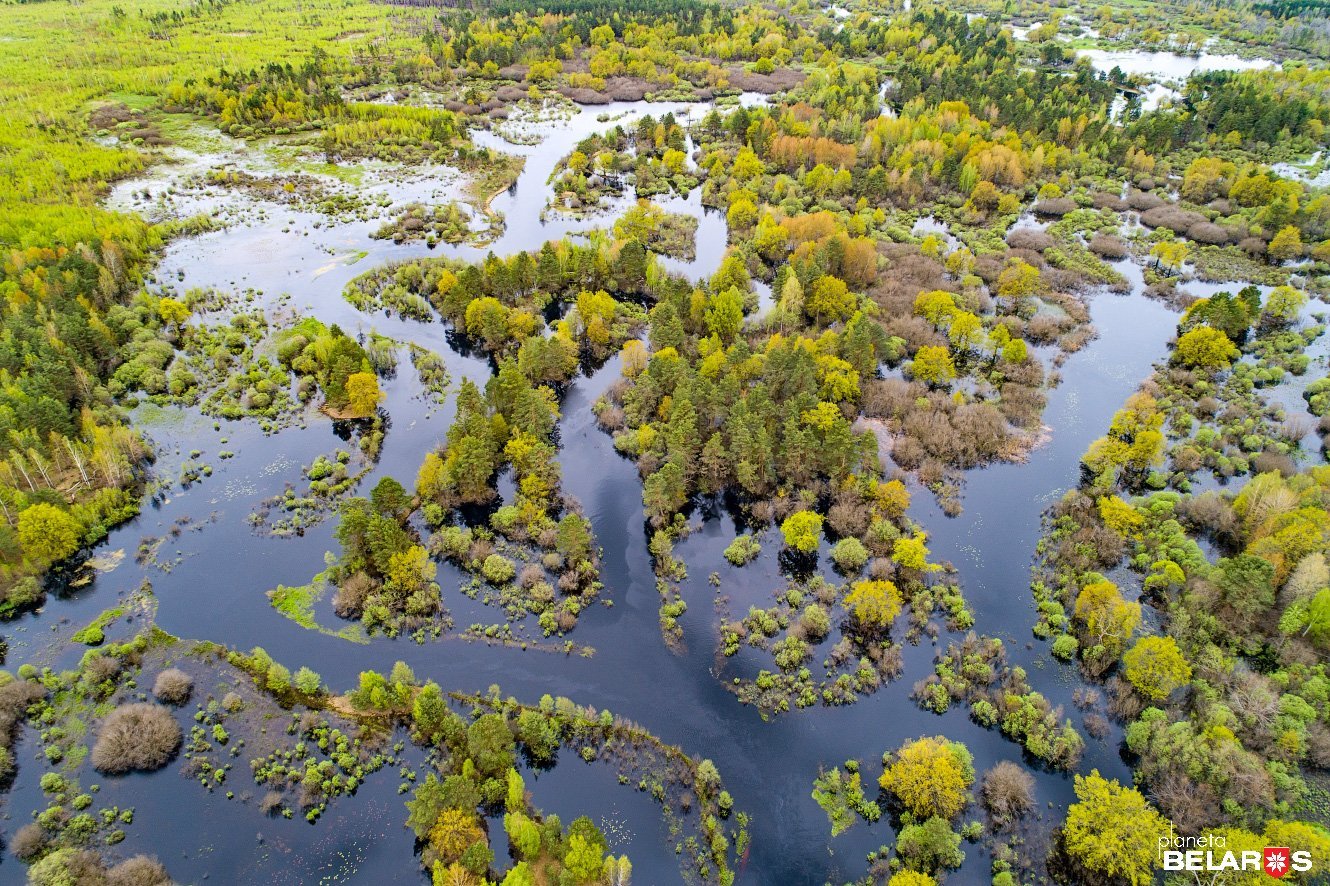 Stviga is one of the most inaccessible rivers in Belarus. It crosses the state border near the Ukrainian village of Poznan and flows initially through the Olmansky marshes. The nearest Belarusian locality is the village of Dzerzhinsk. There are no more villages downstream for almost seventy kilometers, and there is neither cellular communication here. Very close to the place where the water route begins, there is a border post. 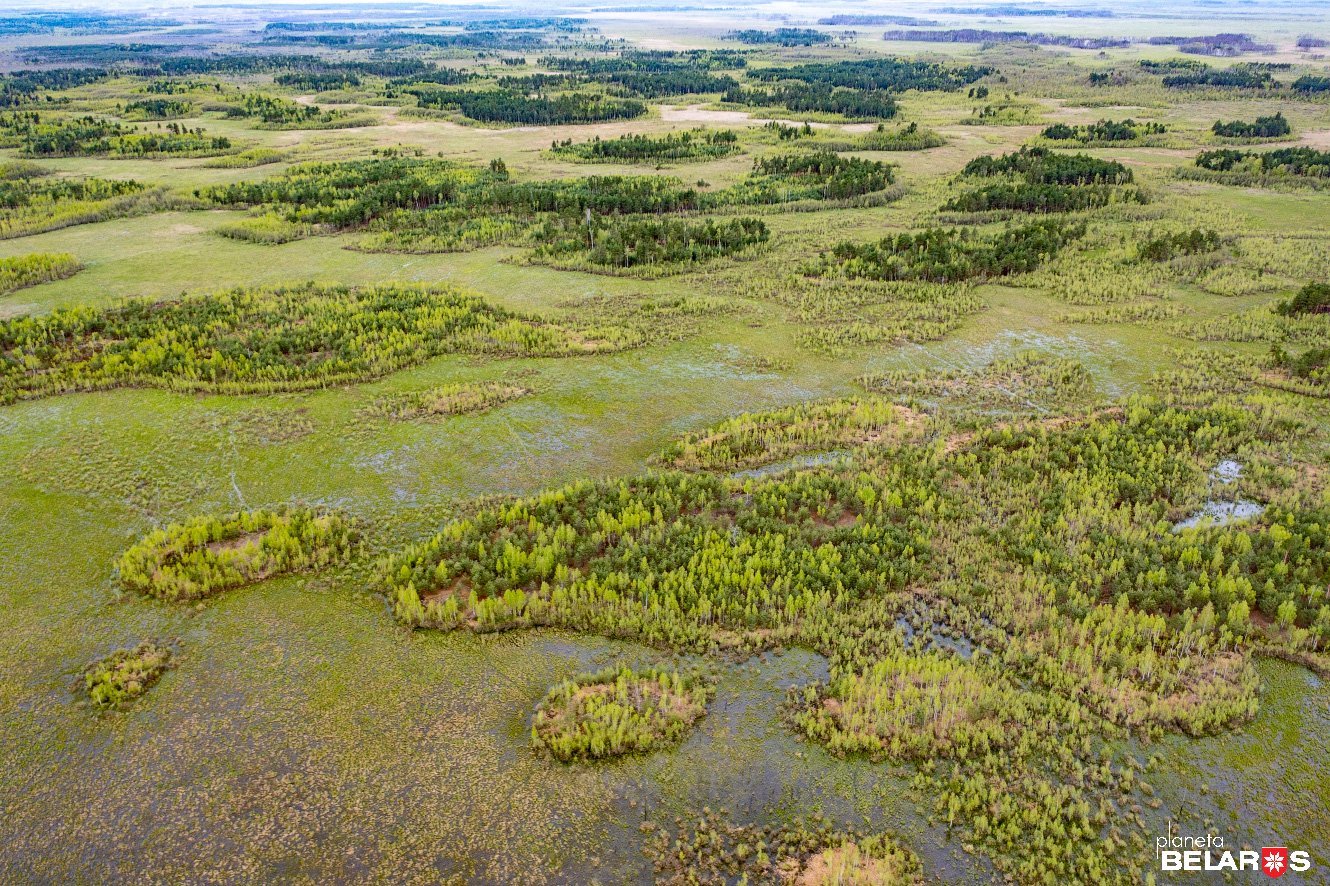 The presence of these factors, as well as the ban on rafting during the fish spawning, result in a very small number of tourists that can get all the necessary permits and organize a kayaking/canoe trip. But  the absence of people in this area is the most interesting thing about the river!

In any situation, must be some solutions to this problem. After learning that the Stviga flows through the territory “Losiny Ostrow (“Moose Island) forestry, I suggested that its head Alexander Bagay tog join me for this trip. "Losiny Ostrov" is a branch of the company  of  "Turovshchyna", which, among other things, is engaged in tourism, has its own hotels in the town of Turov, accepts individual tourists and organized groups. Why not to develop a new tourist route for them?

Alexander agreed, and on the May 08 the expedition starts. 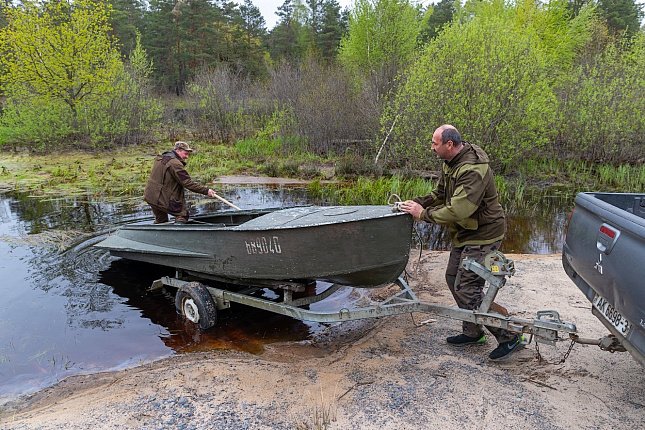 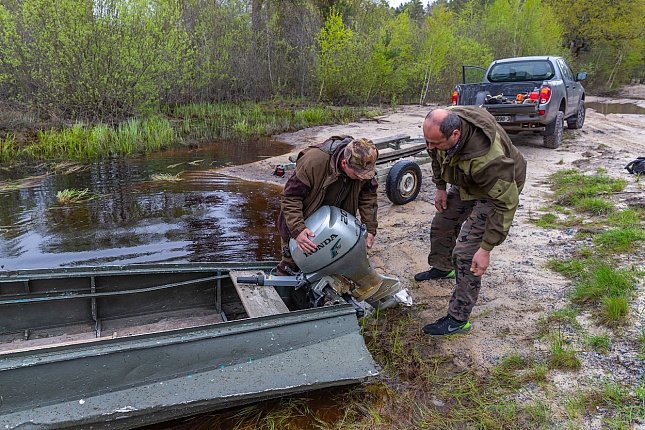 We left Turov early in the morning, the weather was not lovely at all. It was cold and drizzling at times. But we decided not to change the plans, as both Alexander and I had a busy work schedule: it was not so easy to allocate a whole day. But our plan was worth it:  if we organize the water route properly, make a good advertisement, then, of course, there must be potential customers to experience the charms of Stviga. Instead of conventional kayaking, we thought about a more comfortable option with the use of motorboats, which may suit older customers. Imagine: a boat with an electric motor slowly and scielently moves downstream, while you enjoy the views and wilderness of the Polesslocal woodlands.... 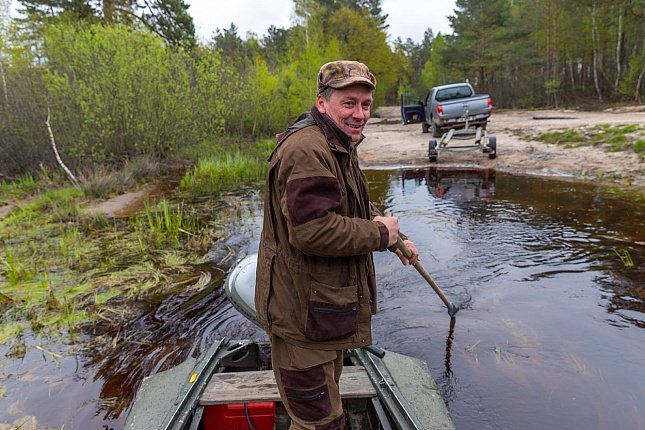 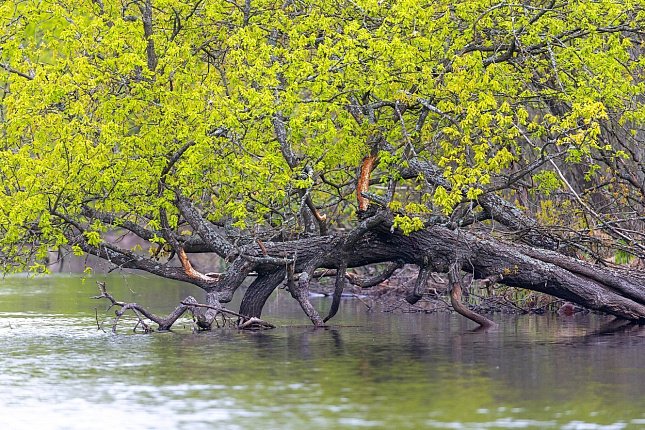 But the Stviga is a very difficult river to organize such trips. Alexander immediately warned me about this, saying that he had taken spare propellers for the engine, that we should be ready to overcome many obstacles and, quite possibly, we will not be able to pass the route in only one day to the end. 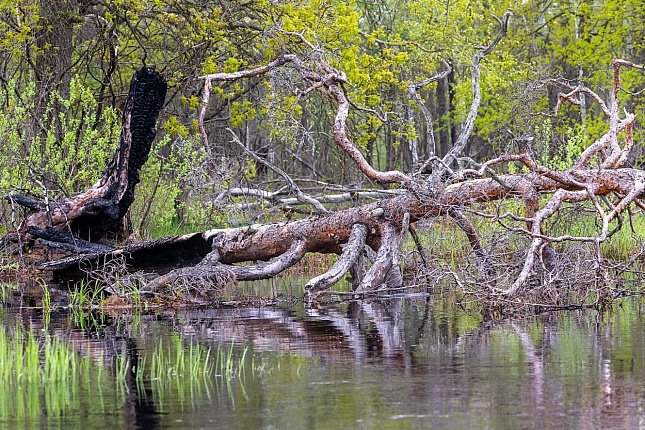 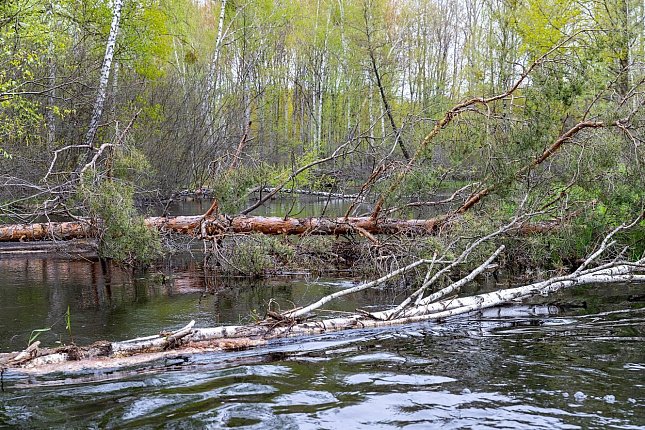 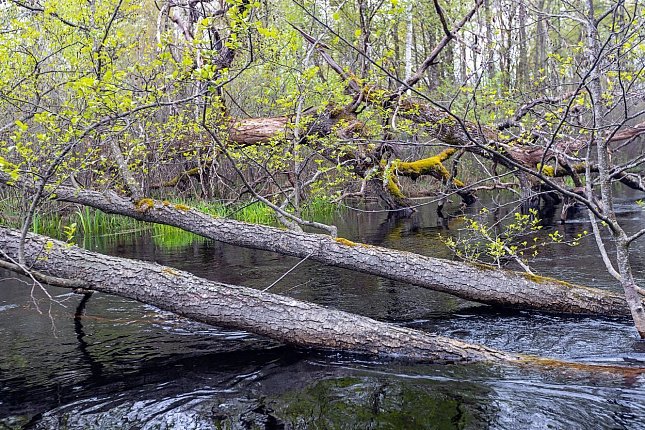 However, in the area of Dzerzhinsk, the river looked to be wide, at first I was even in doubt if it could be blocked by fallen trees at all… 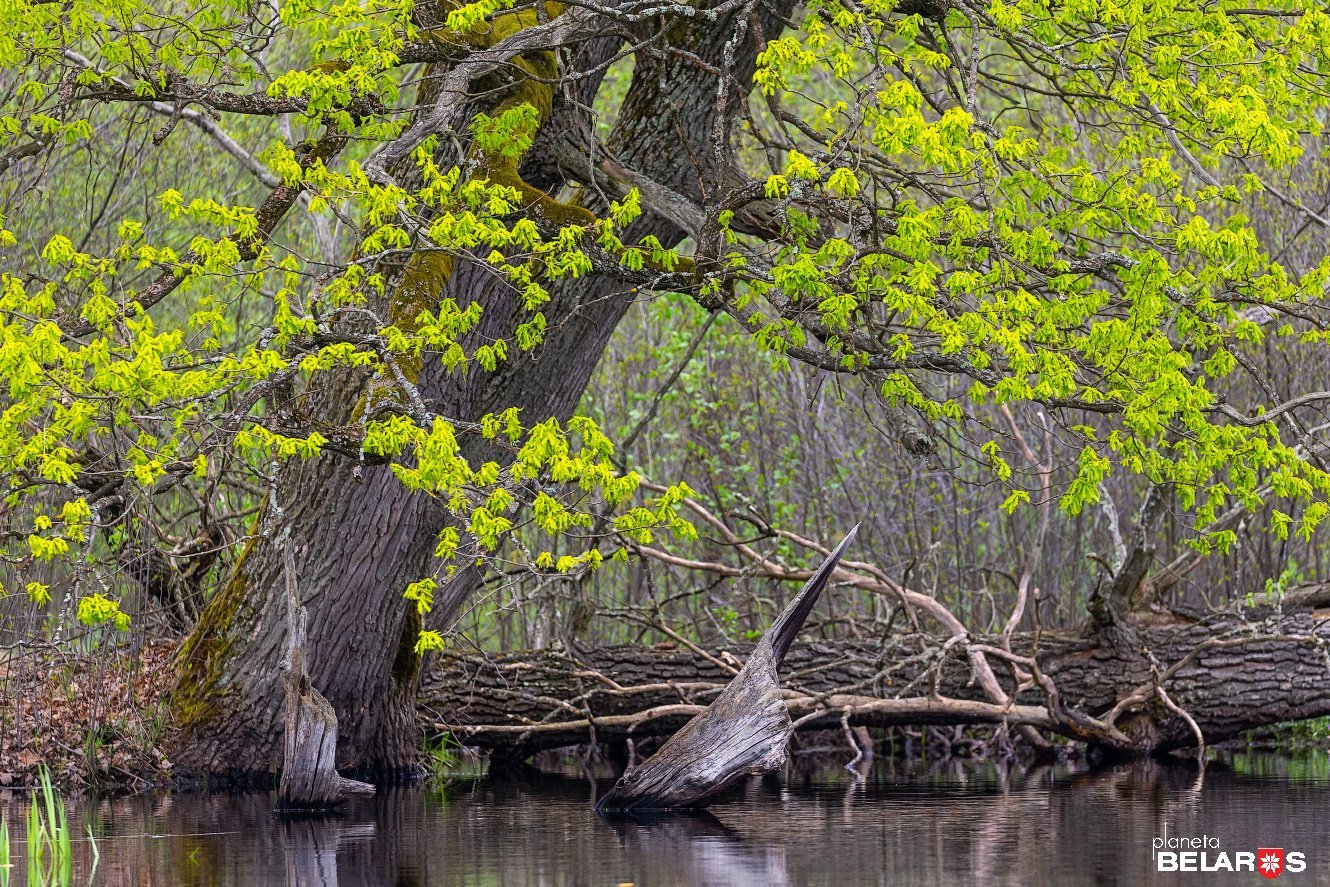 Everything changed when Stviga went through the territory of the Olmansky wetlands. Surprisingly, with each kilometer it was turning more and more narrower, in one place it was less than three meters (10 ft) from shore to shore!

Of course, I wanted to record this moment. I prepared a drone, put it on the bow of our boat, and was just about to touch off…  Suddenly our way was blocked by a fallen oak tree.

The boat hit the barrier, my hands twitched on the remote control, and the drone took off! Trying to detain it, I got the propellers hitting my fingers, the drone approached the head of Alexander, who was dealing with the engine at that moment. Alexander turned his head at the sound, but I managed to raise my flying machine up. This time we were lucky! 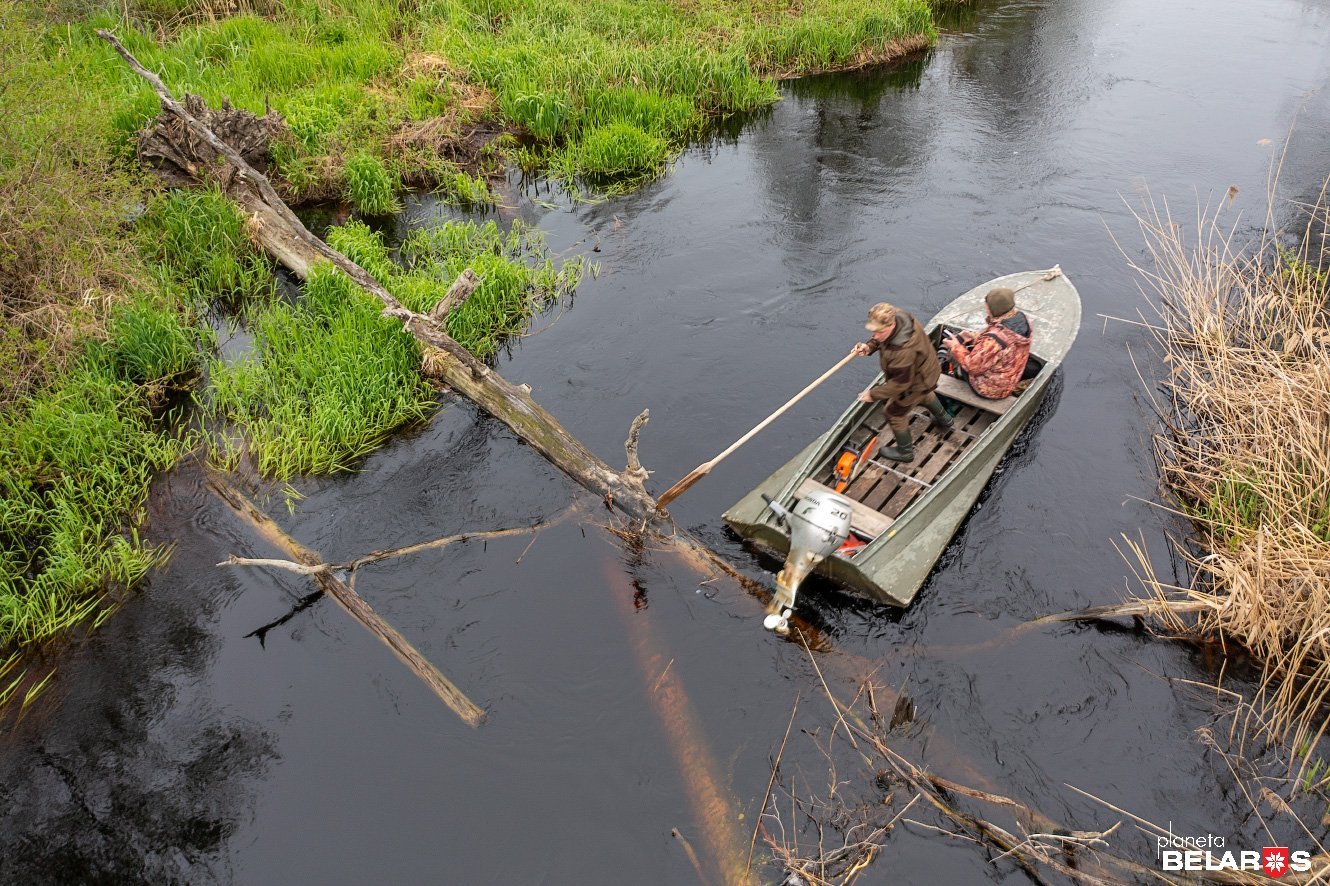 This is the oak tree that blocked our way. 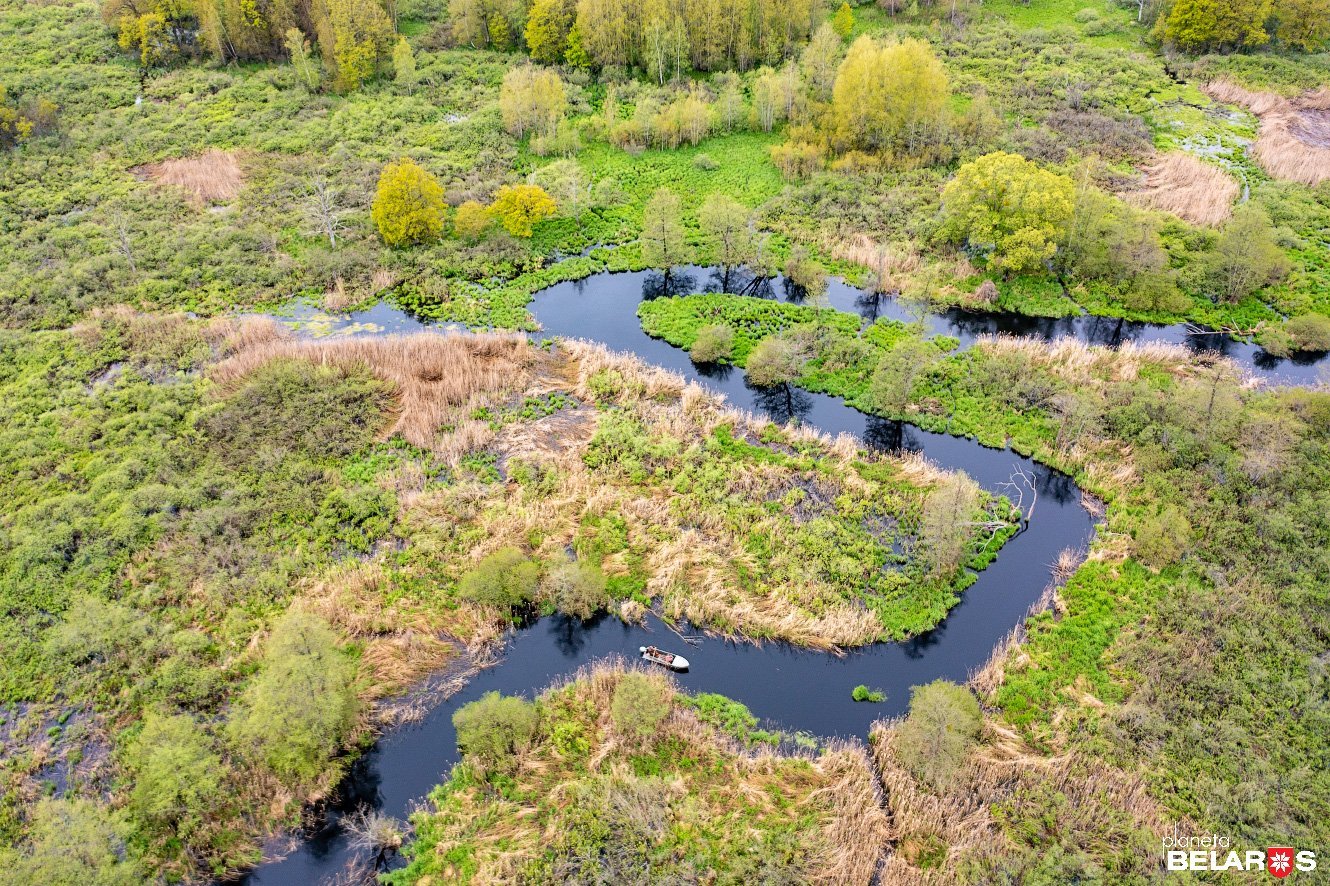 And this is the width of the Stviga River during the highest flood. 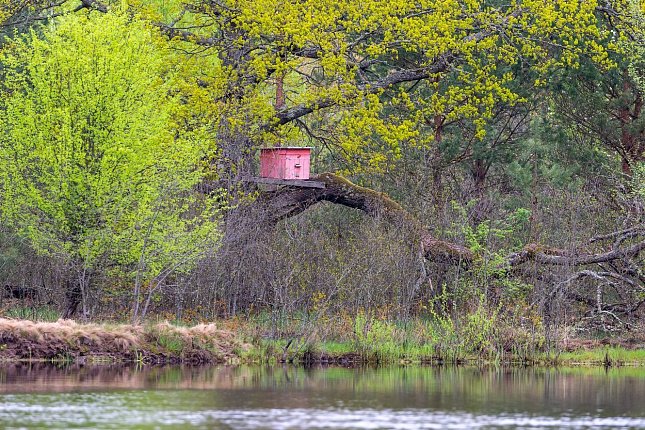 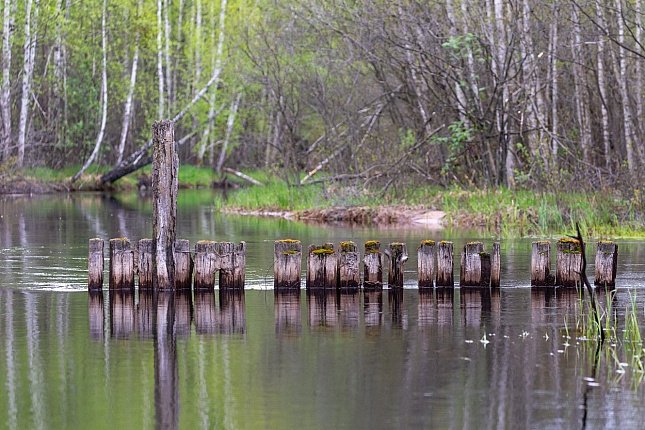 Along the banks of the river, you can see signs that the forest bee-keeping is still being practiced in Polesie. There are remnants of former dams that were made to raise the water level to use the river for limber-wood transportation once upon a time. 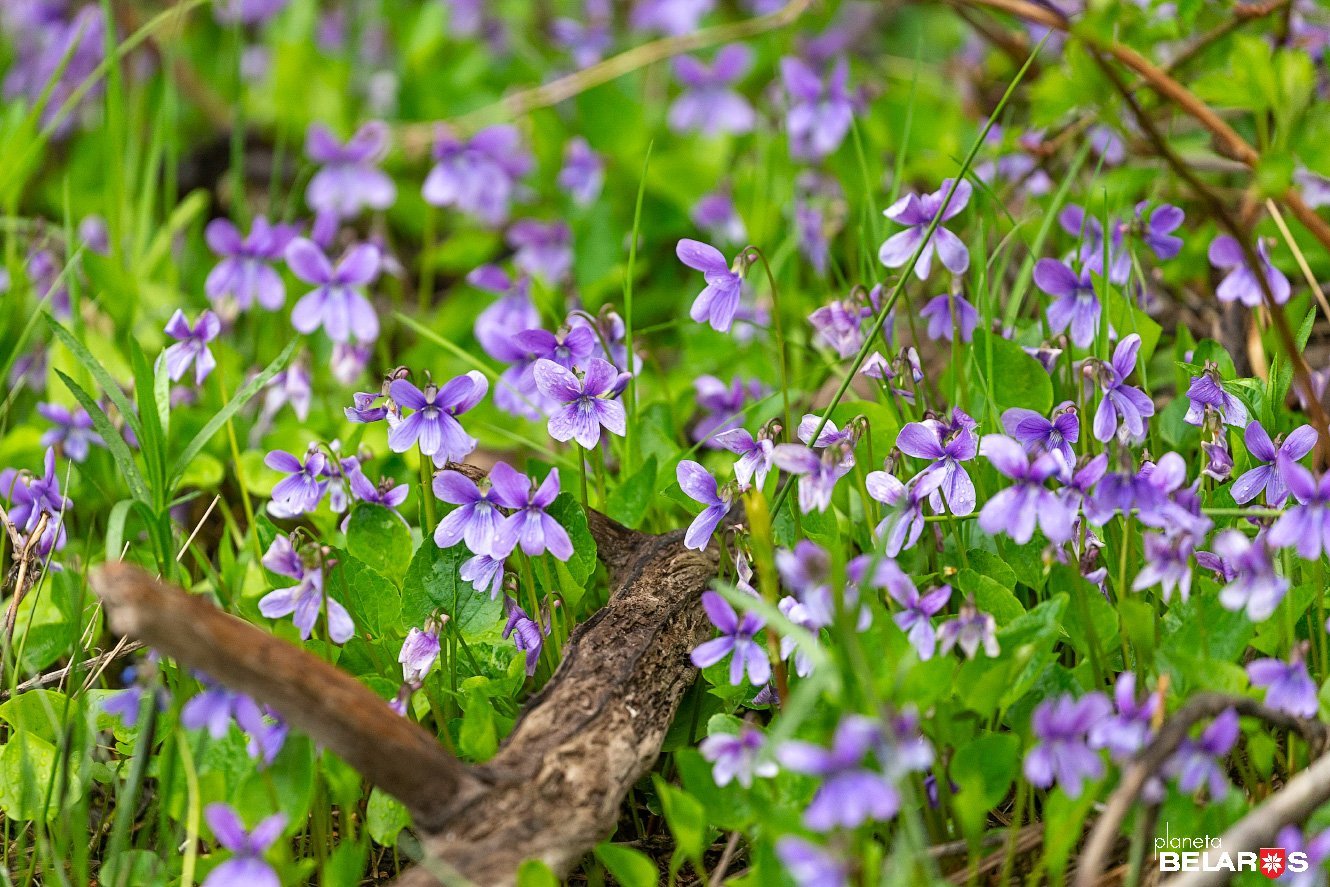 Of course, I couldn’t pass by the beautiful flowers and the unusually tilted aspens. 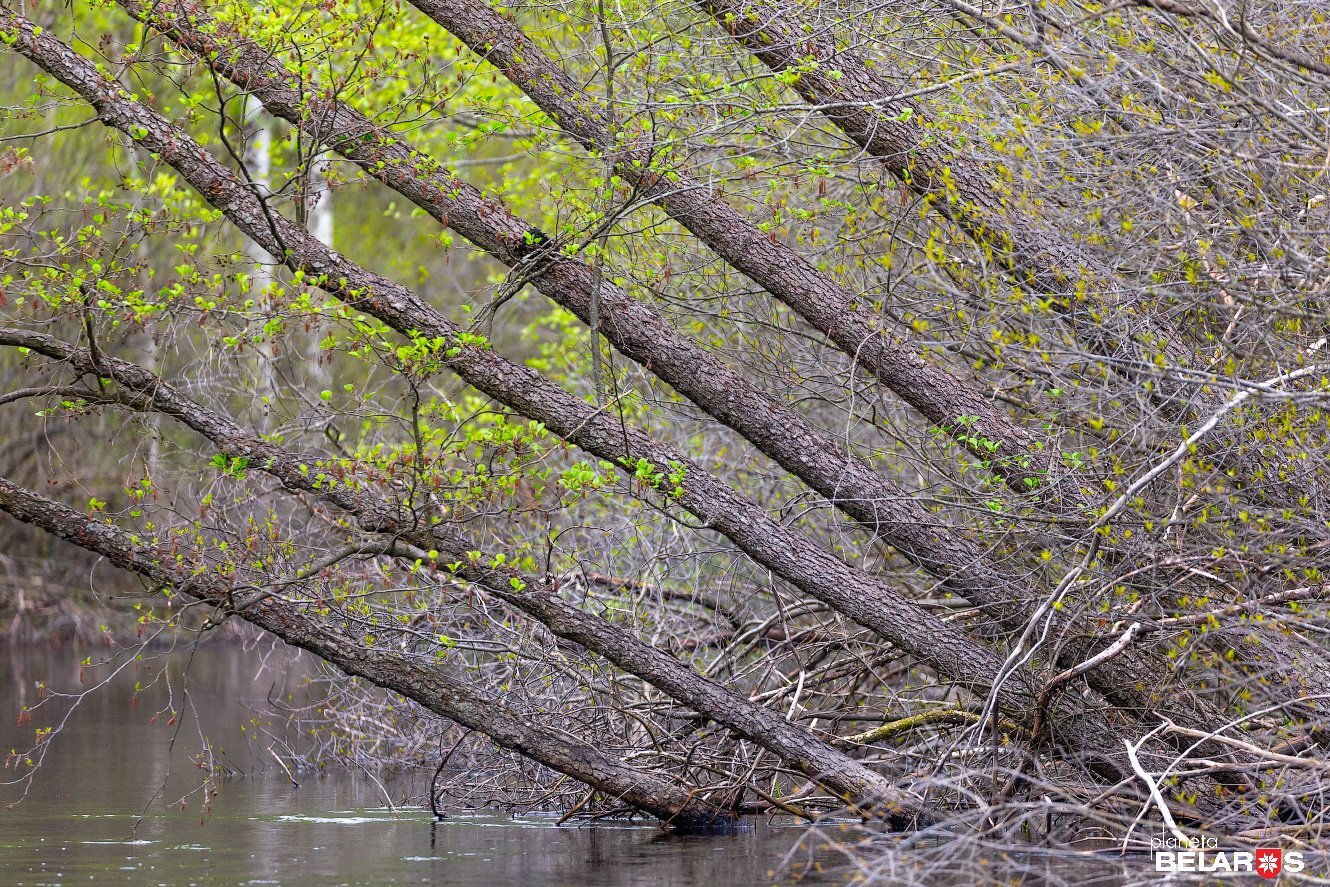 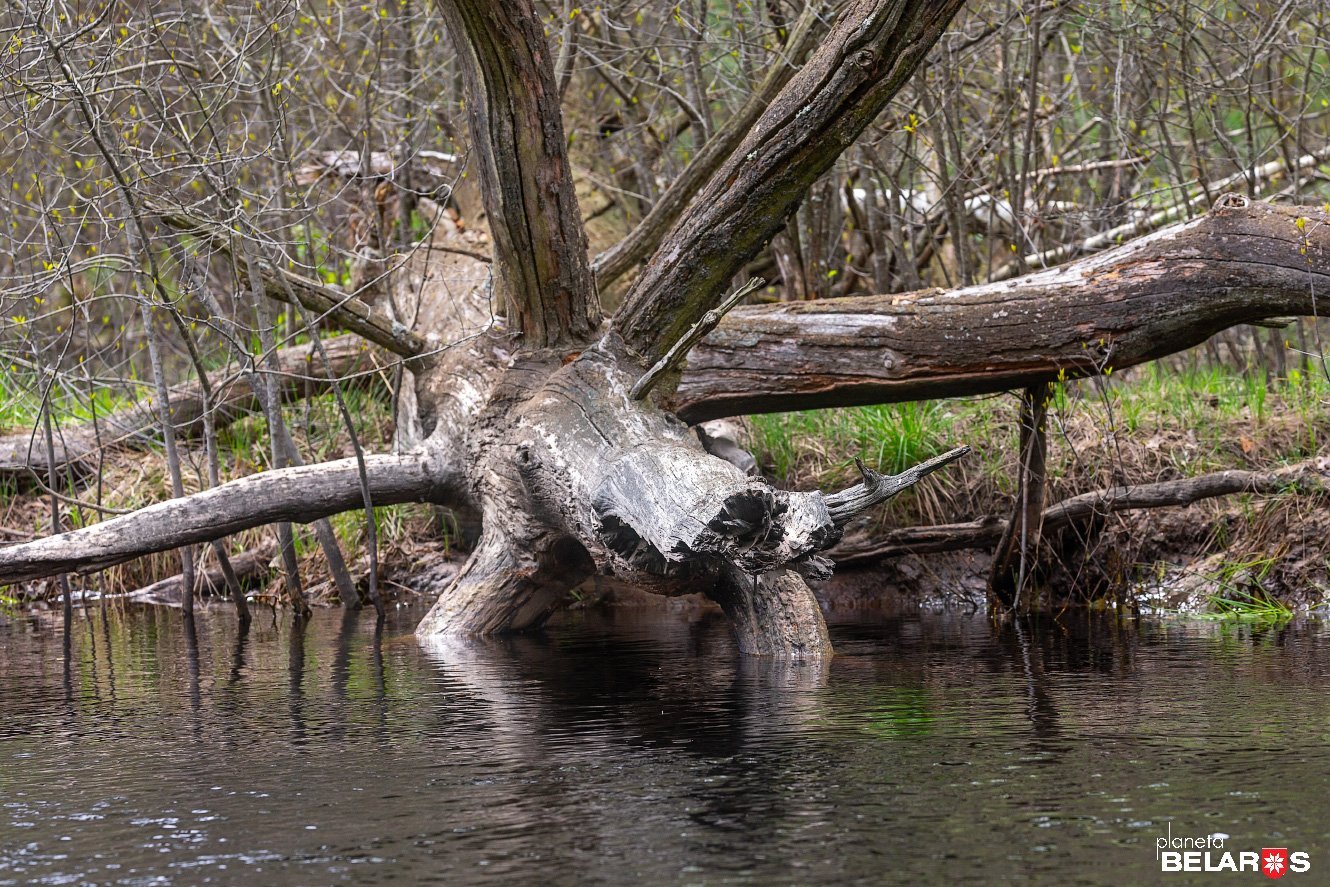 Here's a real forest monster trying to scare us. 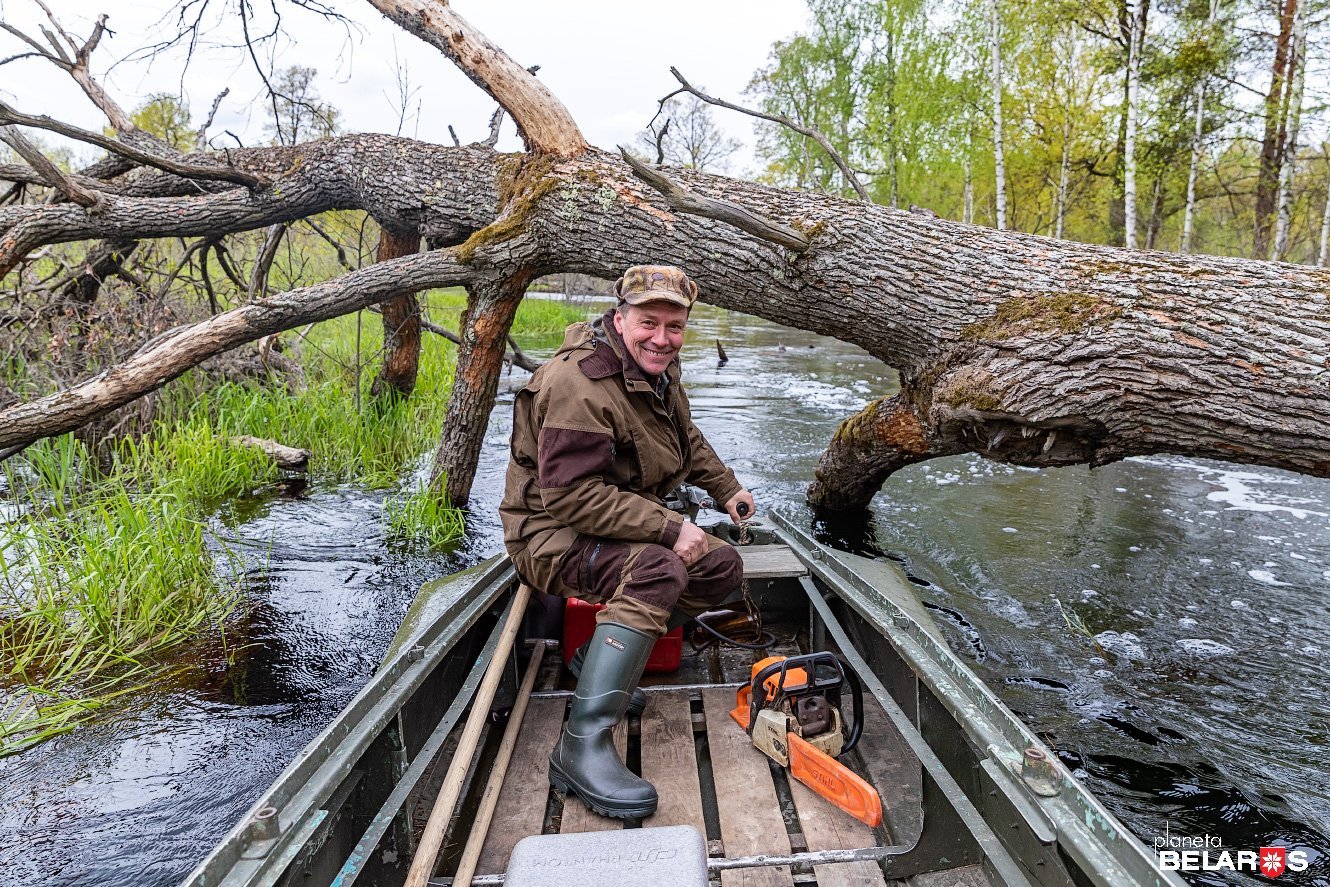 We are still overcoming various obstacles, but, according to Alexander, today the river is very simple due to the high water level. In a month, the blockages will be much higher! 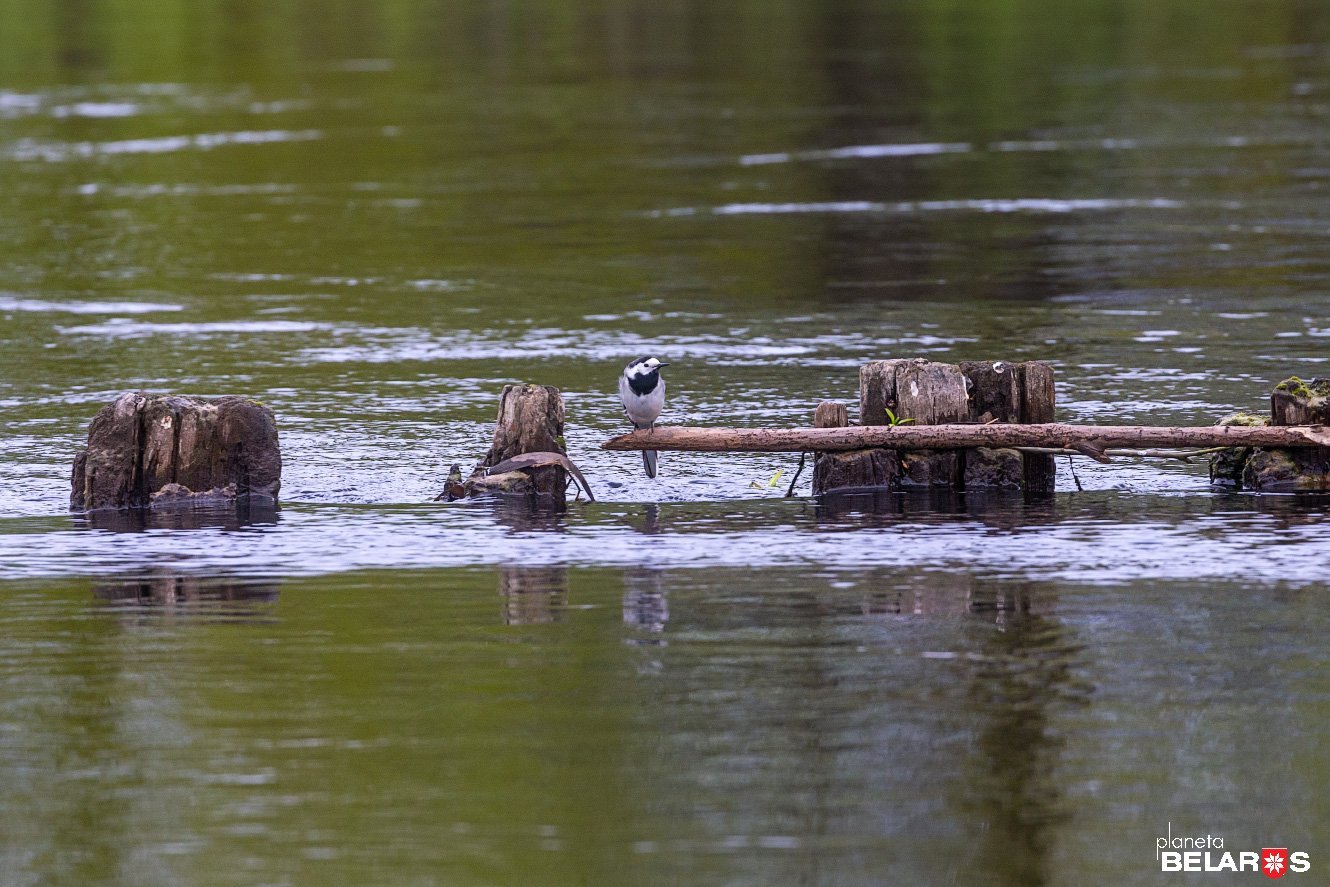 I am surprised by the small number of living things: we have only seen several flocks of ducks, a couple of wagtails, and one black stork. 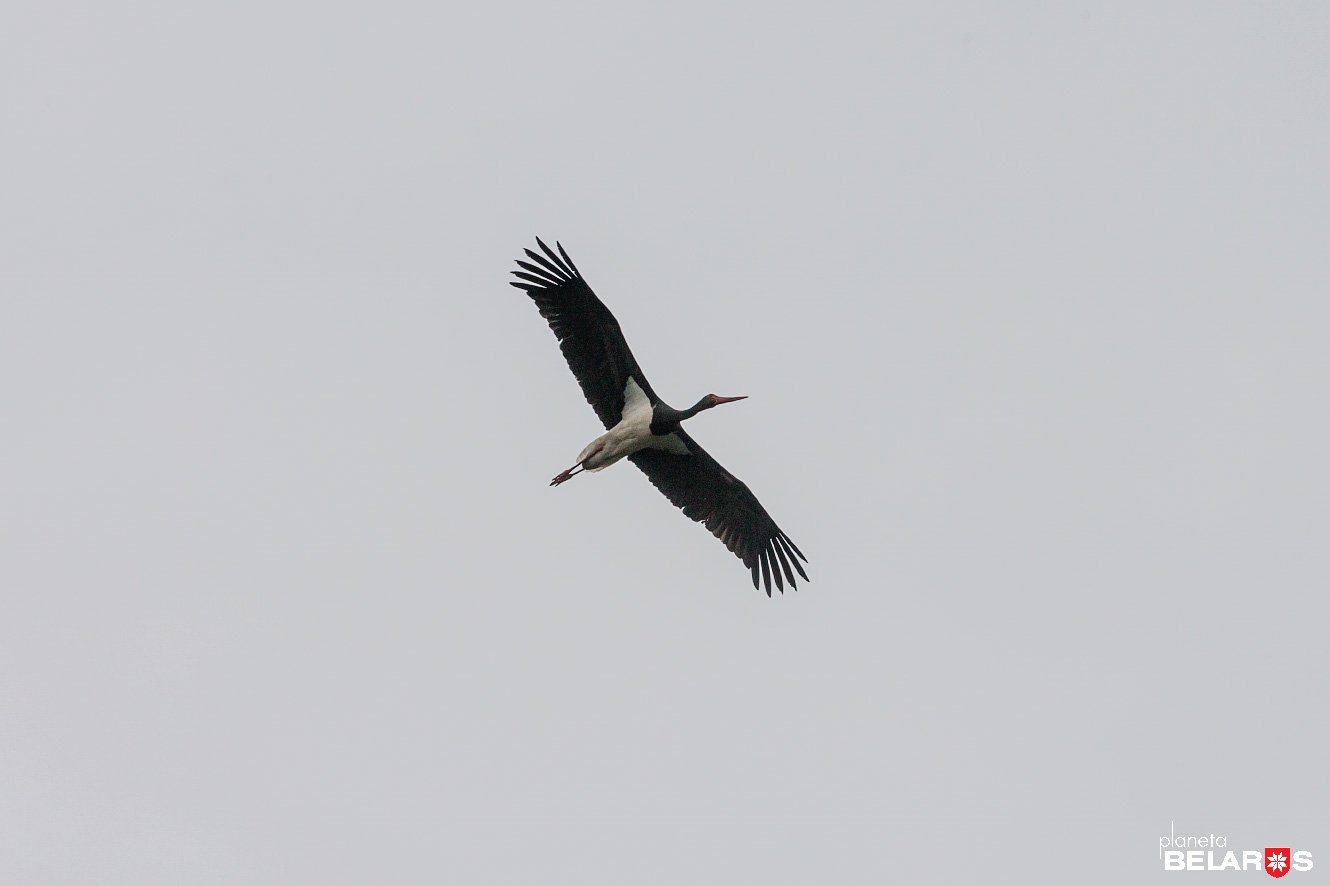 – However, at every turn of the river in its upper course there are traces of the beavers’ activity. 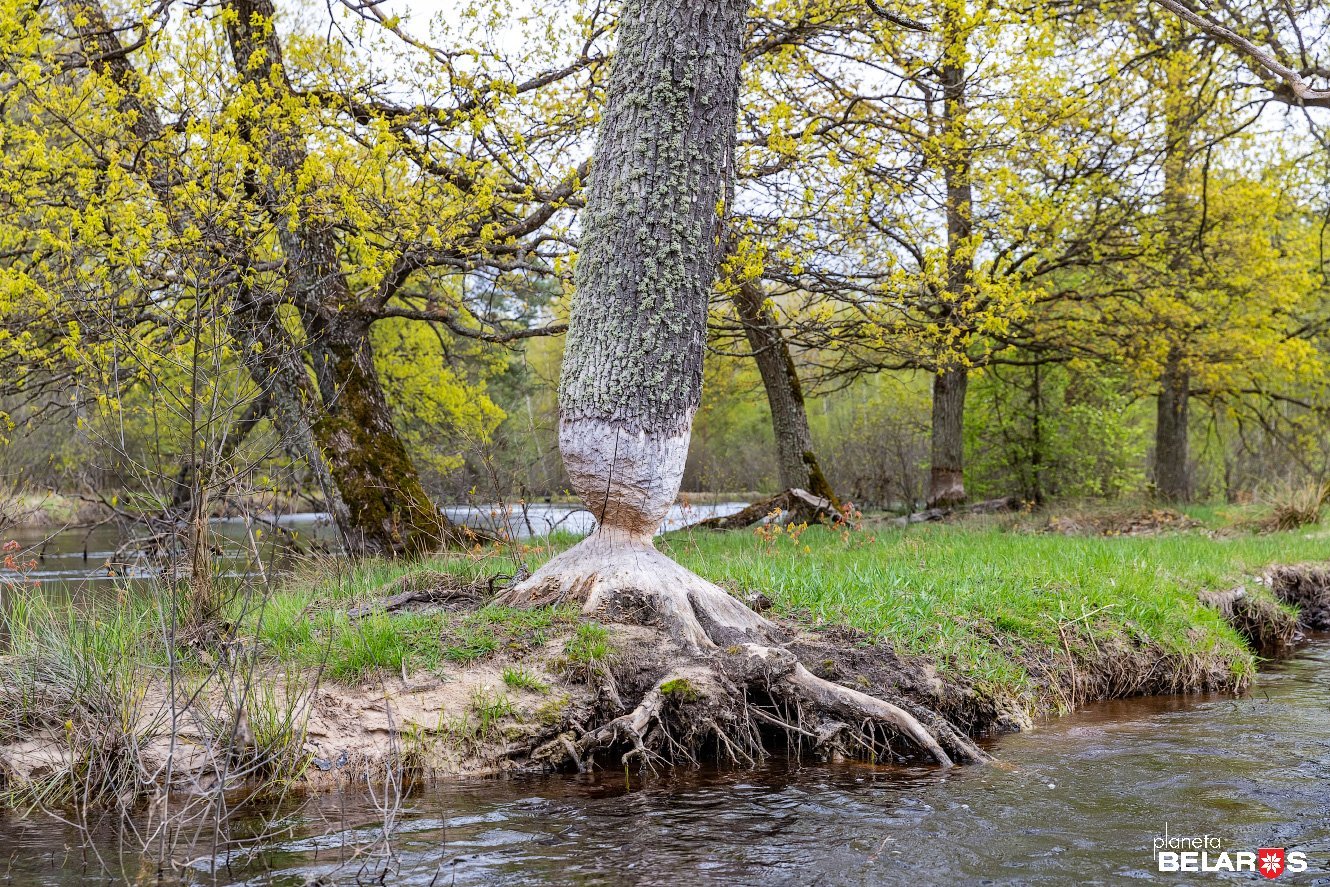 I was struck by their "barbaric" attitude to the oaks. 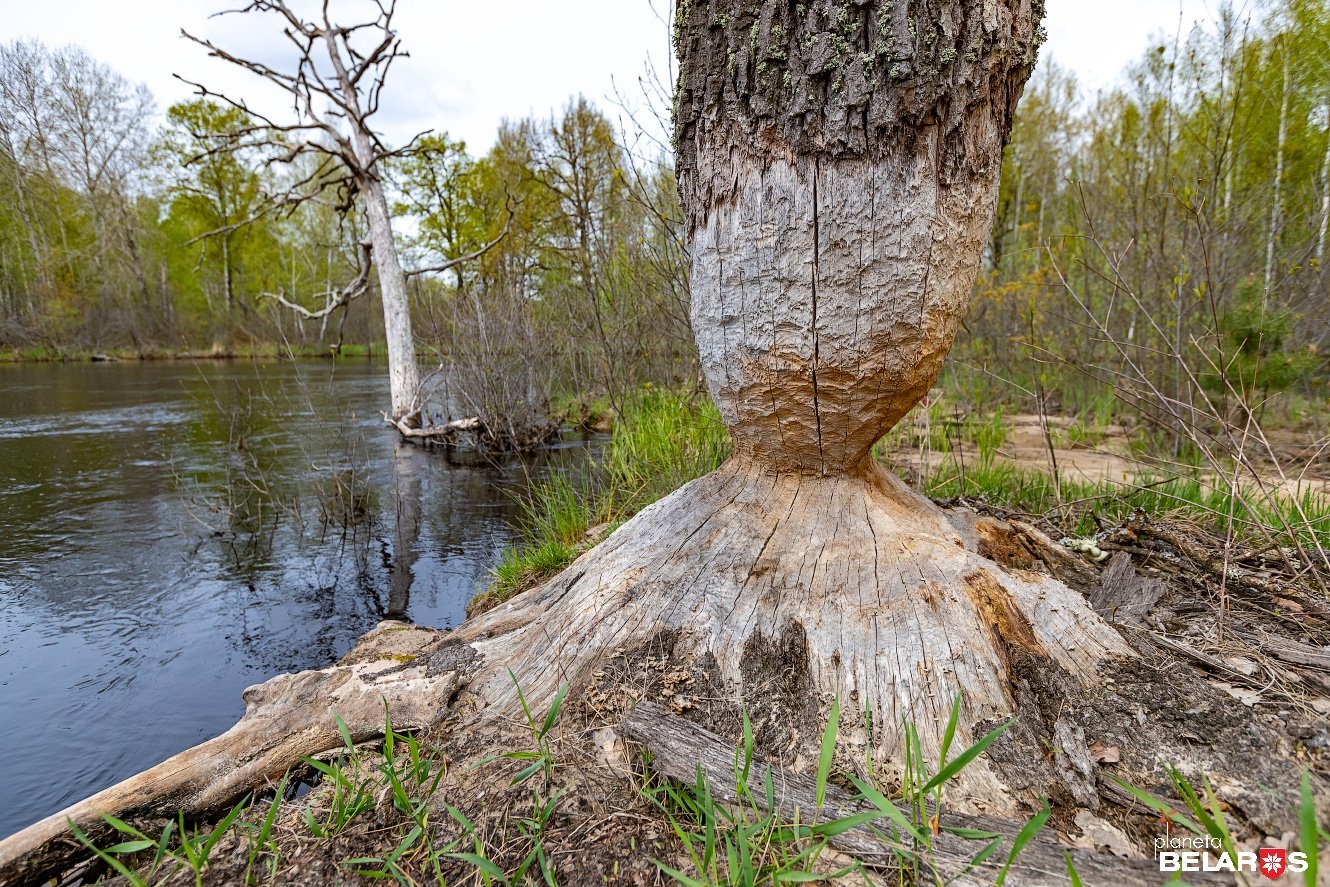 Near one doomed giant we stopped specifically to take a close-up photo of the beavers cut. Feelings  were contradictory: I felt a pity for a mighty tree and was afraid that it will fall on me because of the wind… 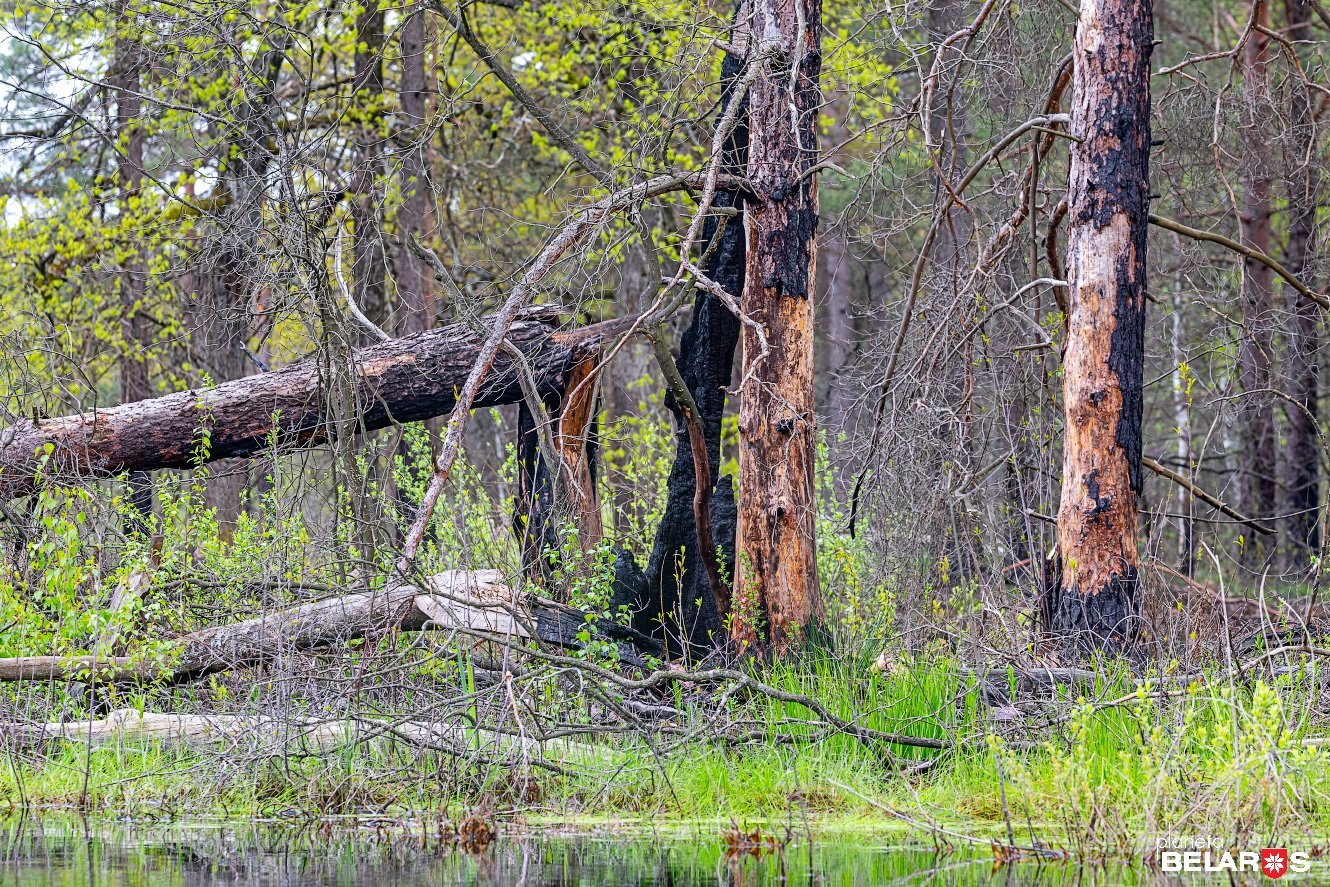 There are many traces of forest fires along the banks of the river. It would be possible to make tragic shots, but for now we have another task. 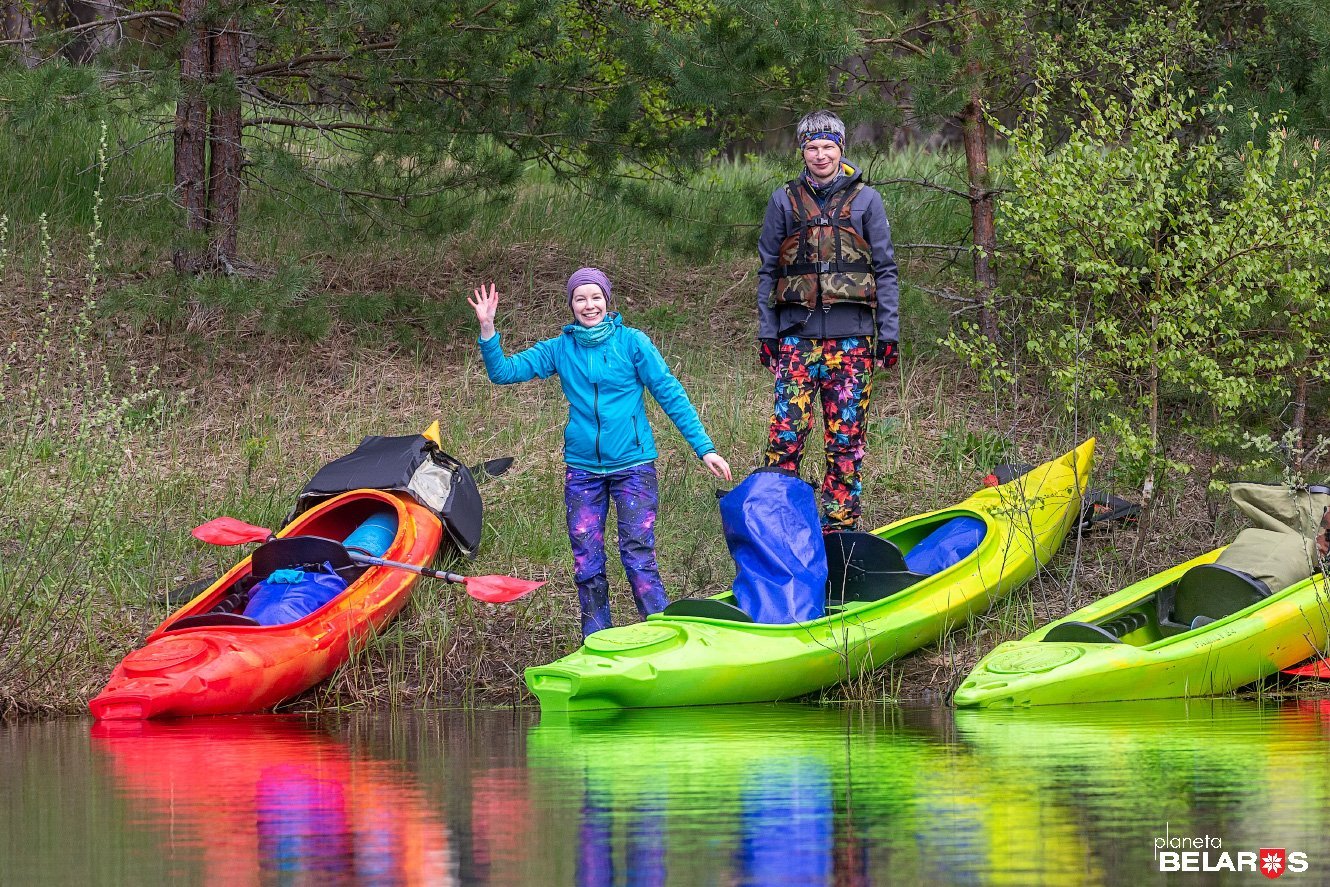 We overtook one group of water tourists and stopped for lunch. 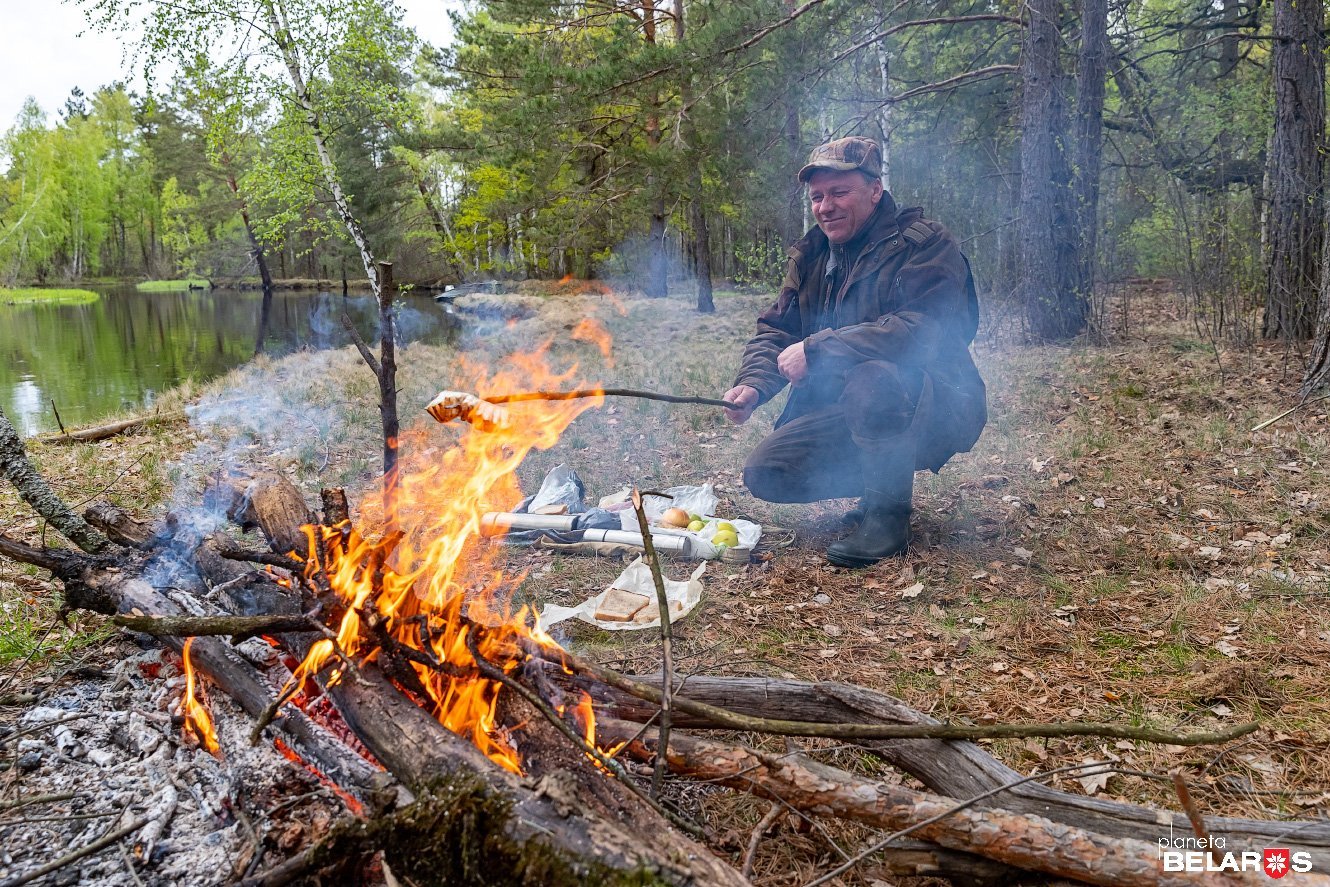 Lard grilled on the fire is a real delight of poleshuks (people of Poliesie)! Immediately I recollected my childhood and the native village of Vanyuzhichi, which is not so far from Stviga. 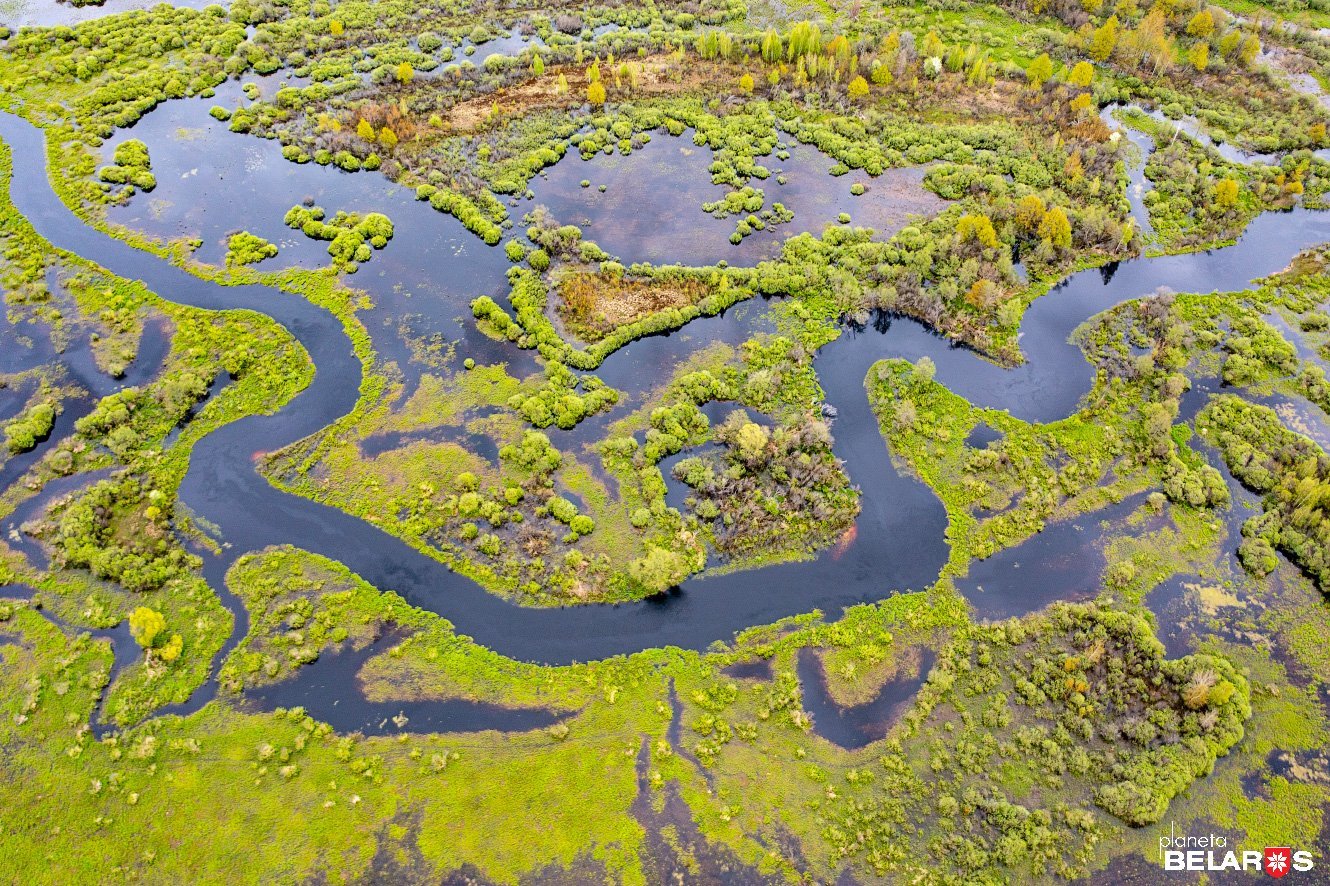 But we need to move on! 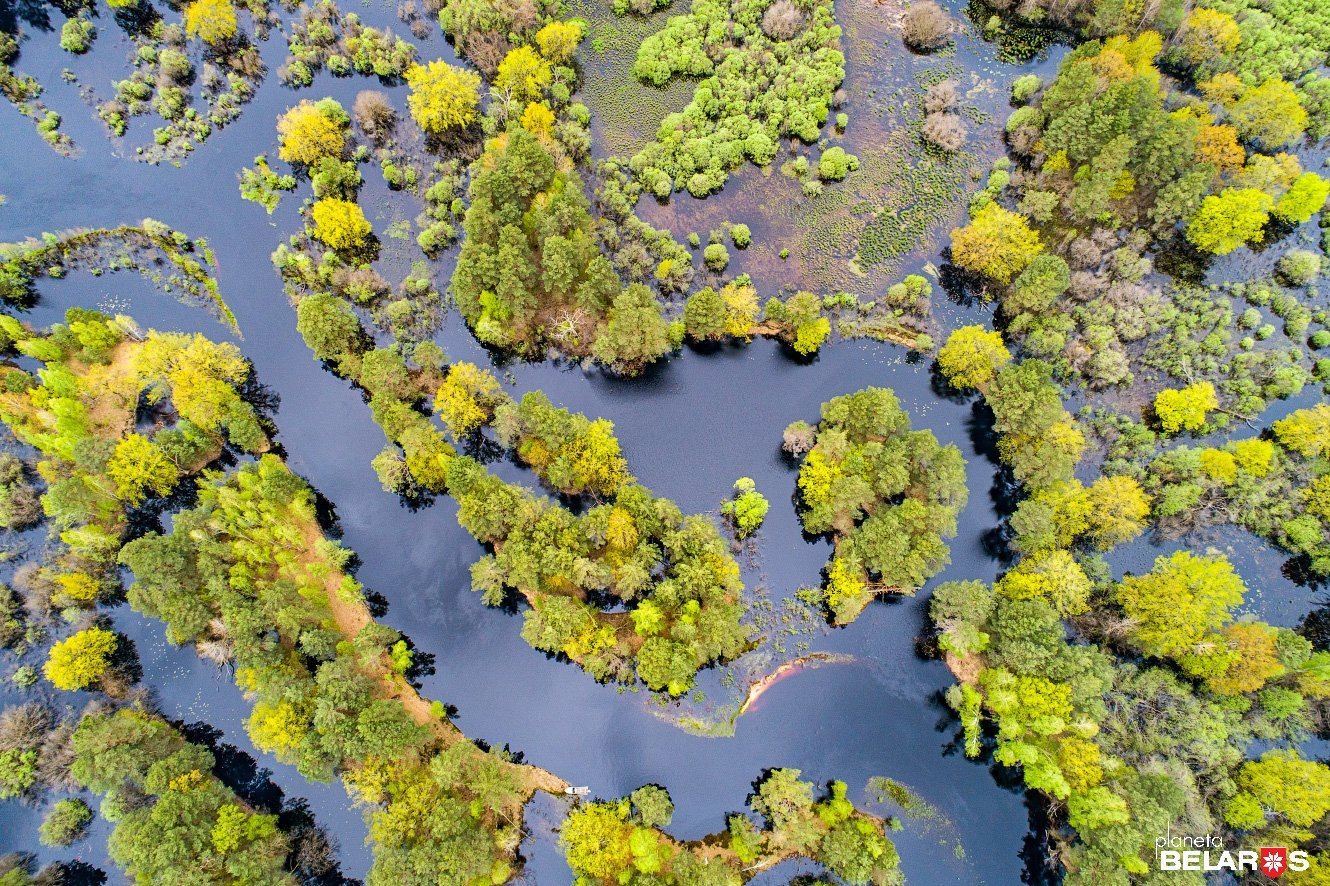 We have to record all the beauty of Stviga. However, it is not so easy to do this: –besides a strong desire it is also necessary that the photo equipment works properly. 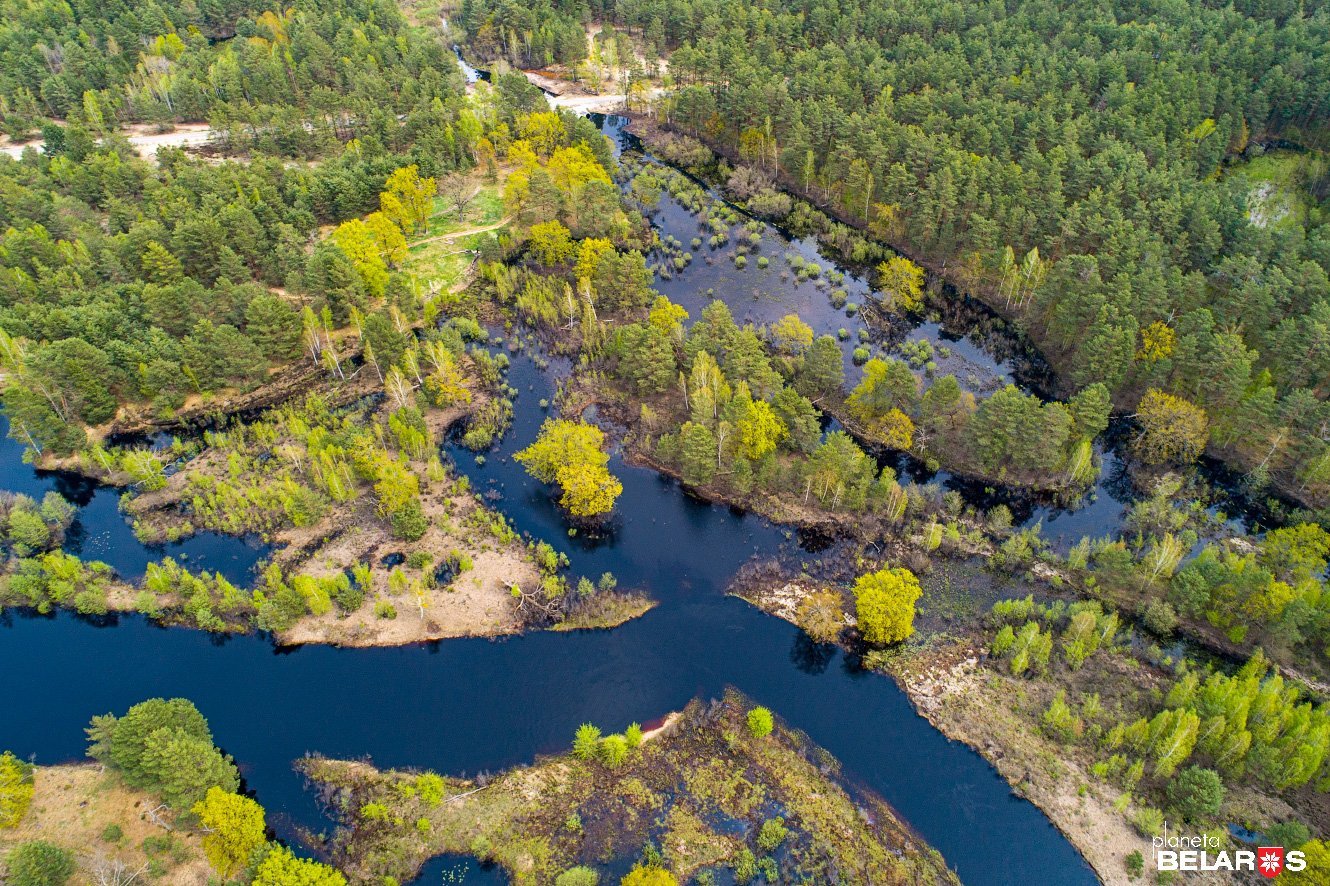 It is at this point, not far from the new bridge over the Stviga, I was unlucky enough to almost lose my drone. But even in this situation, there were some positive moments! Alexander was just looking in that direction, and he saw a “bird” taking a sharp dive down. When Alexander realized that it was not a bird,  he identified the direction and helped me to find my drone. 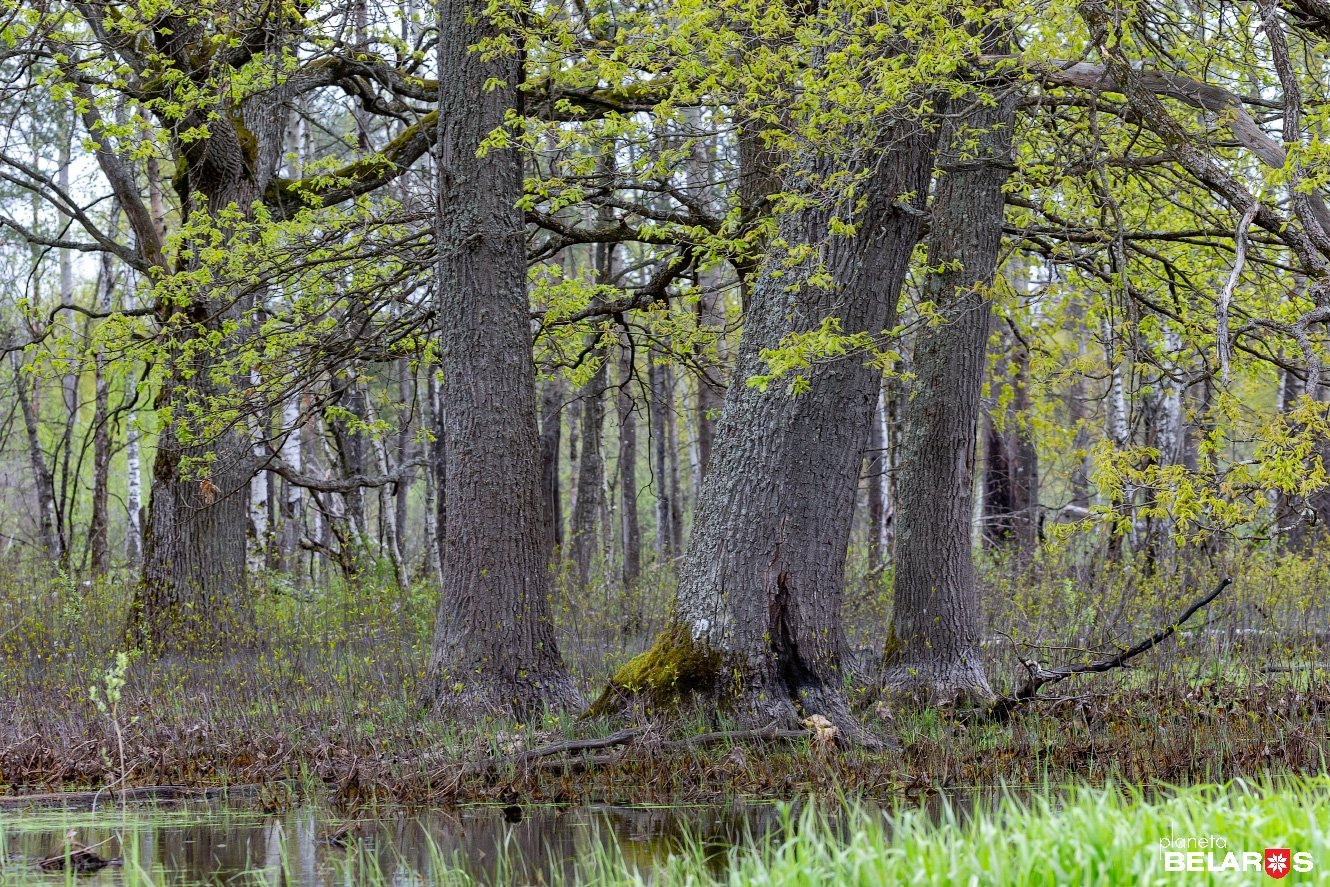 We ended the journey this way, which wasn’t too hilarious.

But I definitely decided that I should come back here again…

Red Deer (Cervus elaphus) in Nalibokskaya Pushcha It was creepy to see this hill of muscles approaching me in a cheerful fighting mood.
Поделиться