May is traditionally the time of interesting observations, but the last May there were so many of them that it is difficult to decide which one to start with. Perhaps the most notable event was the registration of the Little Bunting (Emberiza pusilla), which became only the third in the history of Belarusian ornithology. 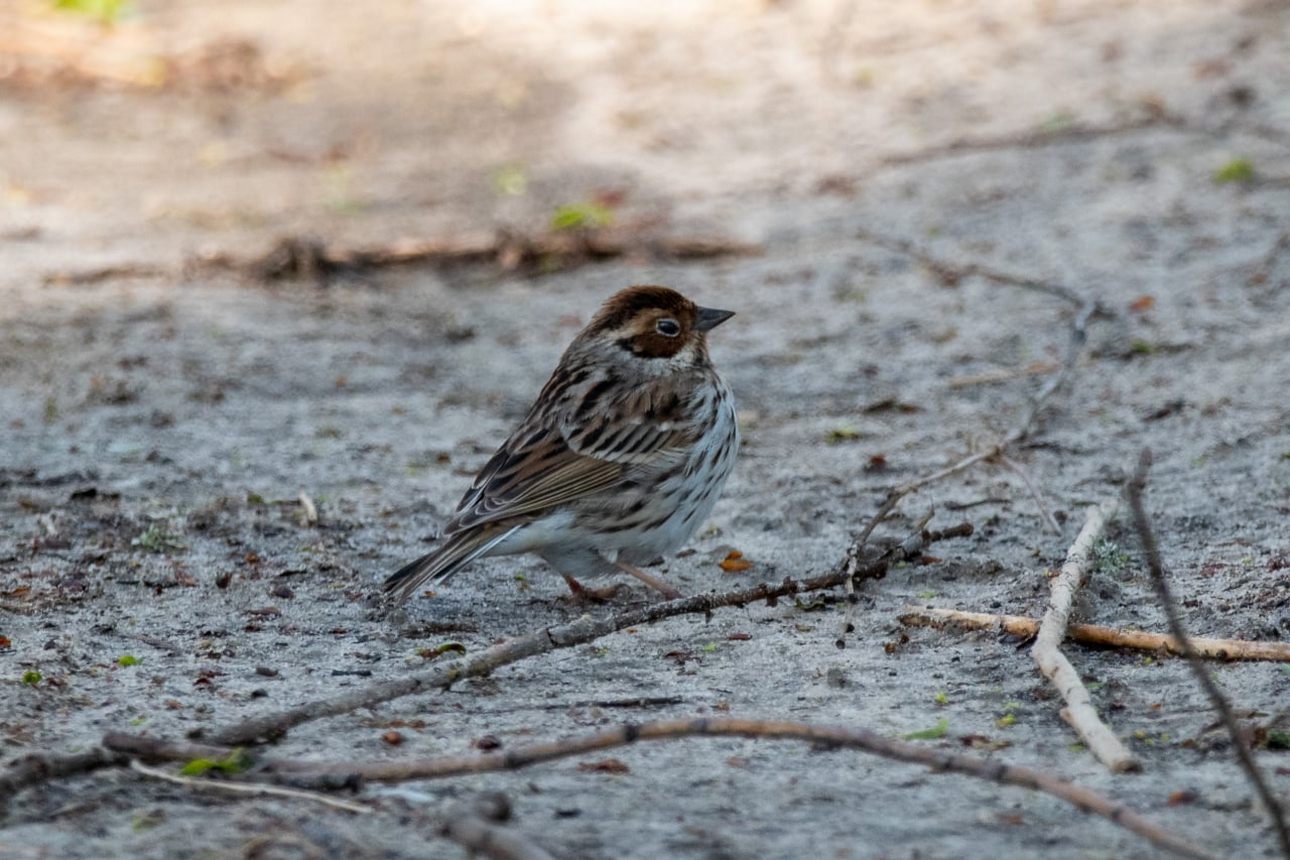 
One individual of Emberiza pusilla was observed near Kremnoye village (Zhitkovichi district). So far, only captured and ringed individuals have been recorded, and only during the autumn migration. This meeting gives grounds to assume that we are talking about a baby Little Bunting that had successfully wintered somewhere in Western Europe and was returning to nesting sites through the territory of Belarus.

Another sensation was the discovery of a pair of Scops owls (Otus scops), which occupied a birdhouse located in the courtyard of a private house in the Kamenetsky district. According to the available literature data, this is only the second case when this species is nesting of on the territory of Belarus (the first one took place back in 1984). 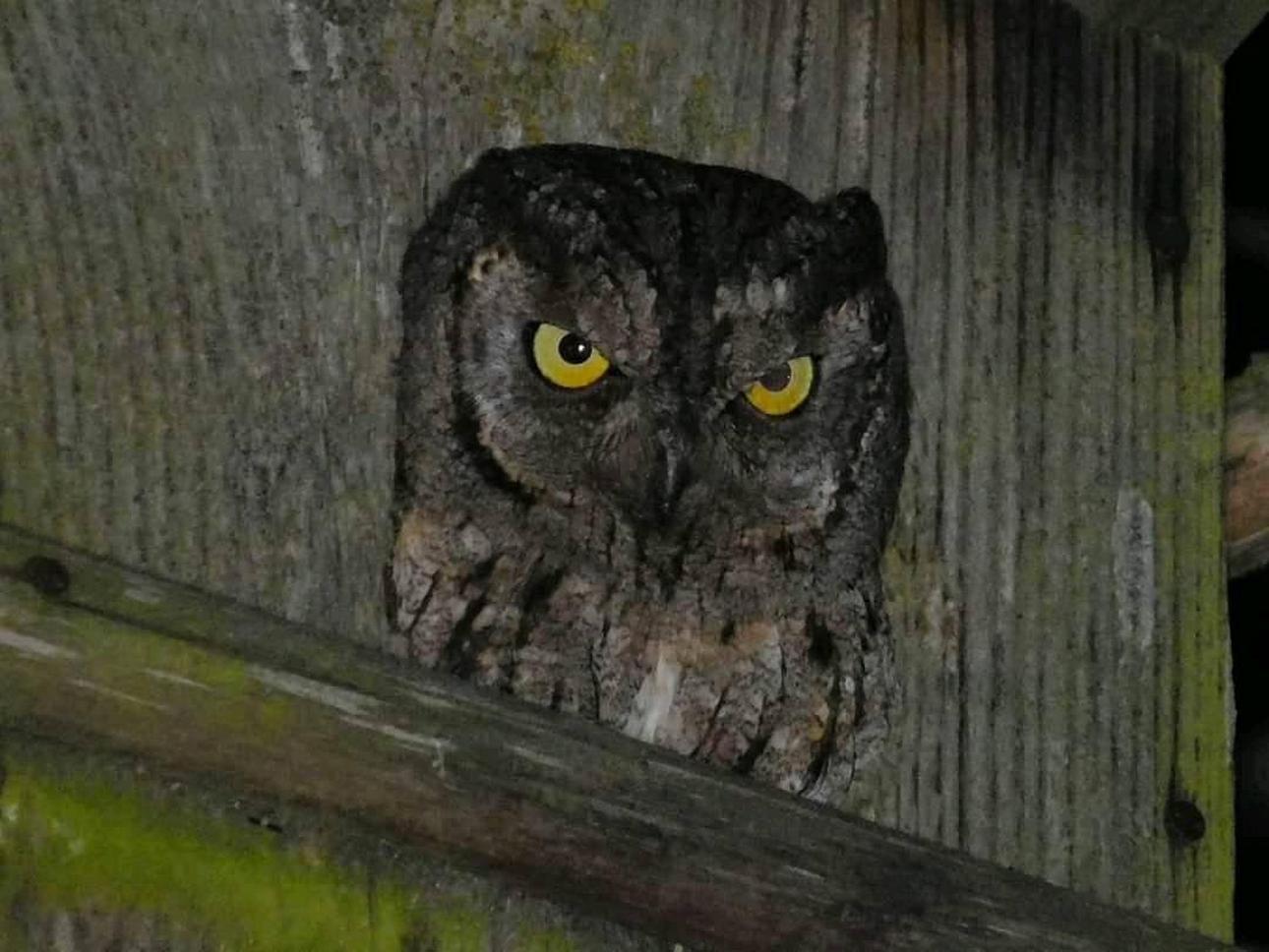 
Comparing to those registrations, other meetings with rare bird look faded. In particular, we are talking about a Purple Heron (Ardea purpurea), which was seen on May 9 at the fish farm "Dneprobugsky" (Drogichinsky district). This species has been increasingly observed on the territory of Belarus in recent years, but it still remains to be quite rare.

In the middle of the month, the sandpipers that nest in the tundra reminded of themselves. So on May 15, a Red-necked Phalarope (Phalaropus lobatus) was registered at the water purification system located near the village of Sinilo (Minsk district). On May 16, a Grey Plover (Pluvialis squatarola) was seen at the fish farm "Volma" (Chervensky district).

On May 23, Broad-billed sandpipers (Limicola falcinellus) were noticed in two places at once: at the fish farms "Dneprobugsky" and "Volma". In the latter case, they were accompanied by a Sanderling (Calidris alba) and a Caspian Tern (Hydroprogne caspia). 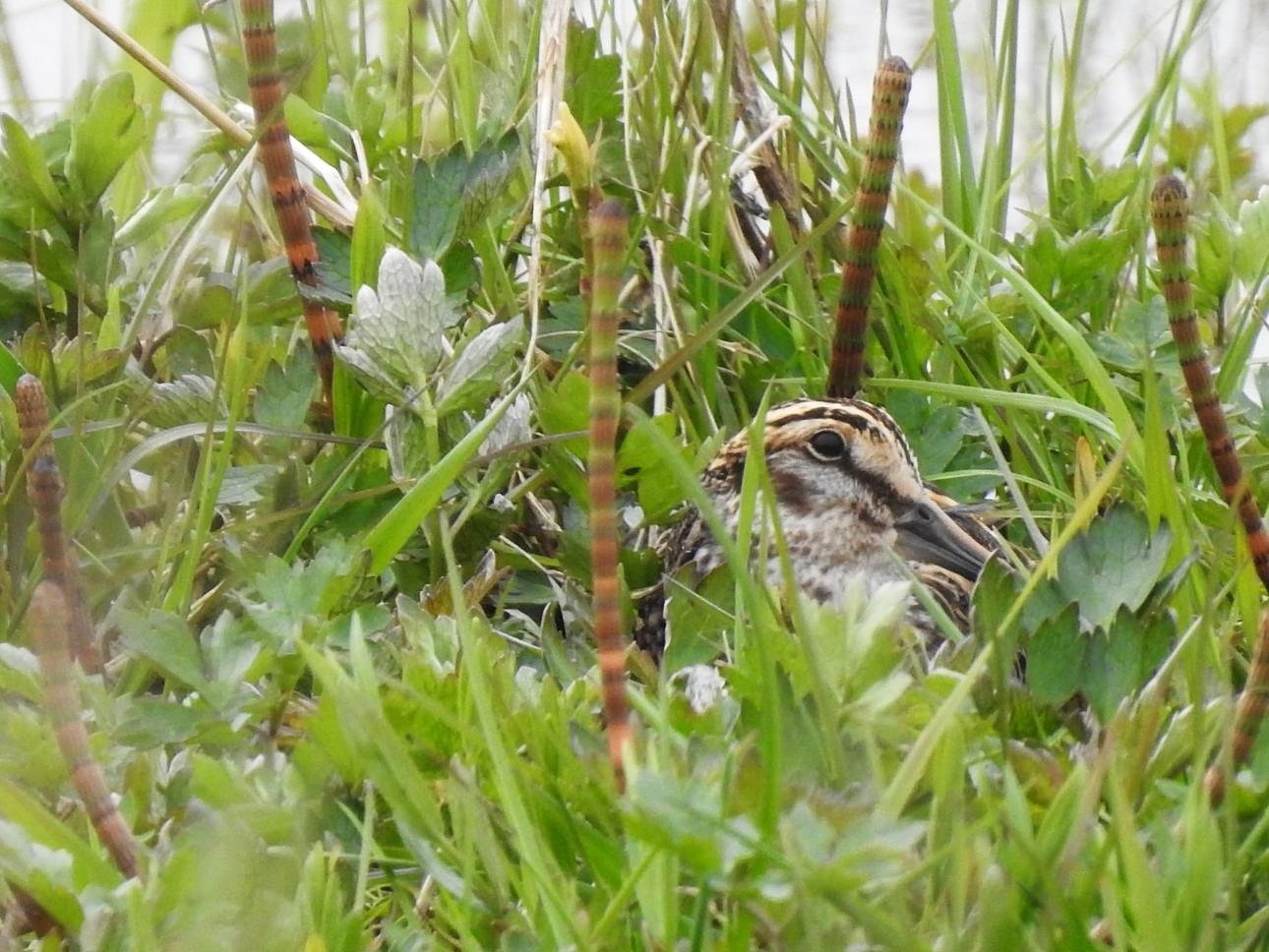 
Sandpipers were observable last month. On May 2 a Jack Snipe (Lymnocryptes minimus) was pictured in the Chervensky district.

On May 3, a Marsh Sandpiper (Tringa stagnatilis) was seen in the floodplain of the Dnieper River on the territory of the Mogilev district. A day later, a representative of this species was also registered at the “Dneprobugsky” fish farm, and one more individual was seen on May 16 near the village of Sherstin (Vetkovsky district).

On May 8, two Pied avocets (Recurvirostra avosetta) were faced at the fish farm "Volma" (Chervensky district). Last month Black-winged stilts (Himantopus himantopus) were observed three times this spring: the first registration was made at the “Dneprobugsky” fish farm on April 4, while two representatives of this species were seen again near the city of Brest on April 10. But still the most interesting observation was made on May 30 when a breeding pair of Himantopus himantopus was found on the territory of the Zhitkovichi district.

The Whimbrel (Numenius phaeopus) was seen twice last month: in the Pinsky district on May 22, and at the “Volma” fish farm on May 29. 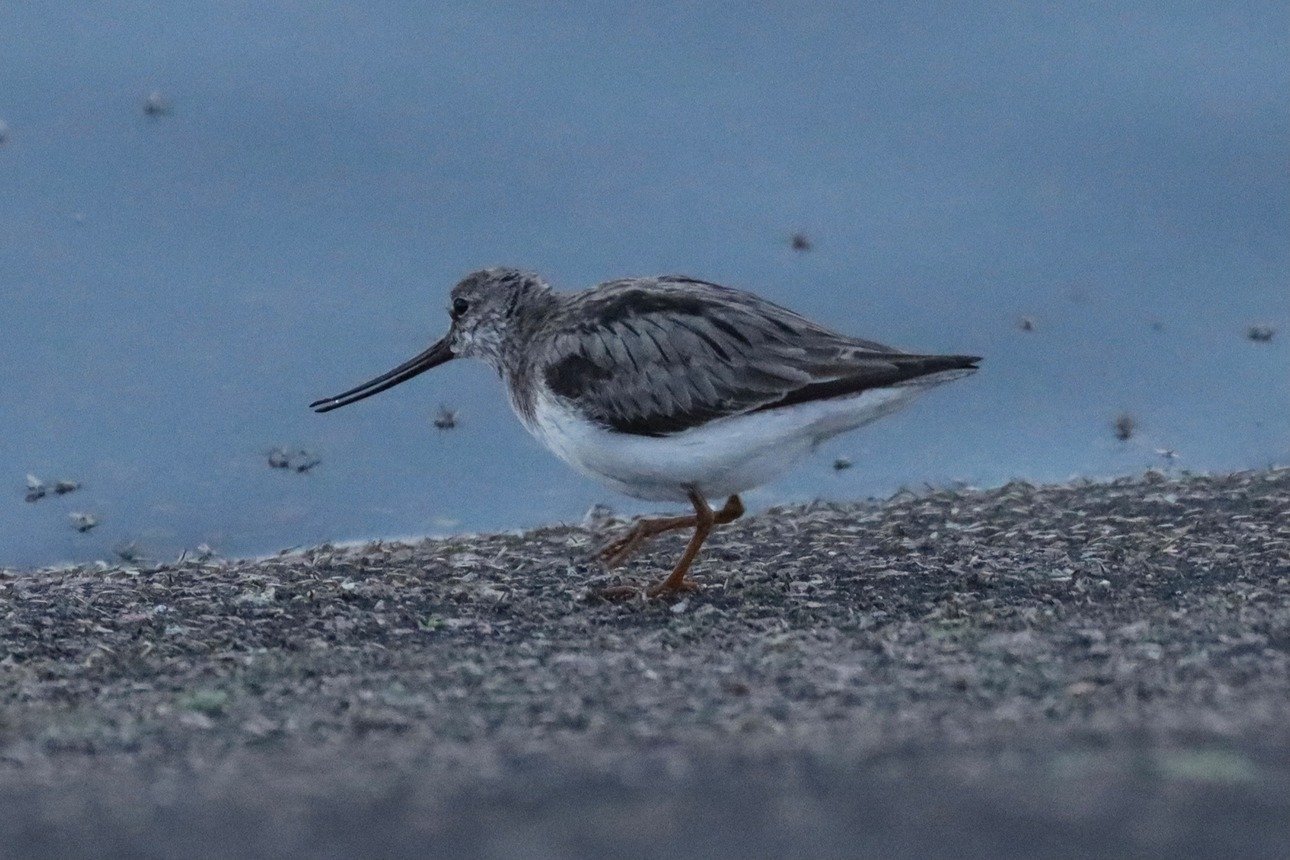 
At the end of the sandpipers’ story, it should be mentioned that whimbrels (Numenius phaeopus) were found on the Dnieper-Braginsky reservoir (which is located in the Loevsky district) on May 9.

On May 8 a Lesser Grey Shrike (Lanius minor) was also noted on the Dnieper-Braginsky reservoir, and on May 1, a group of birdwatchers observed a Mediterranean Gull (Larus melanocephalus) at “Volma” fish farm. On May 11, a Common Shelduck (Tadorna tadorna) was also seen there, and two more representatives of this species were faced on May 9 by a group of birdwatchers at the water purification facilities of the city of Baranovichi. 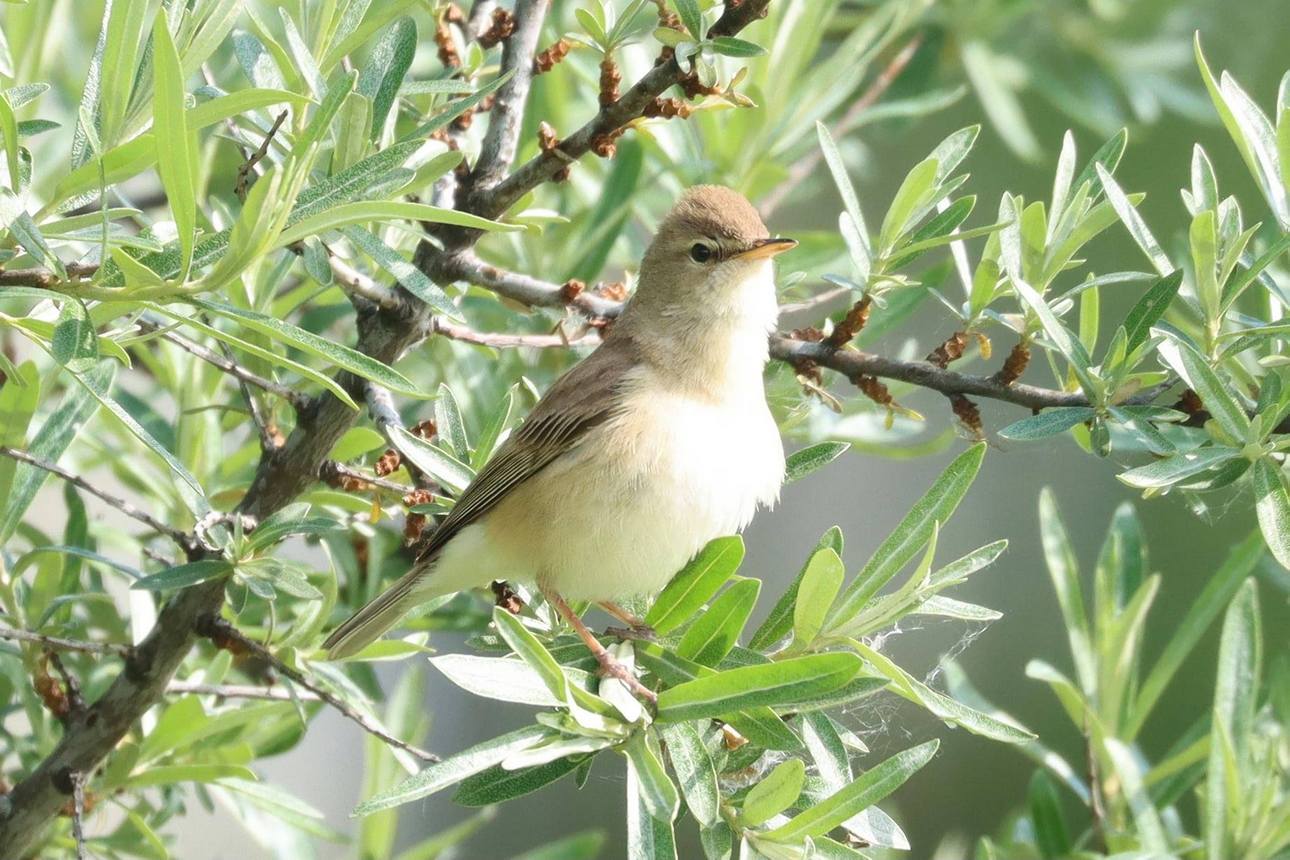 
On May 4, the Tsnyansky reservoir, located on the territory of Minsk, pleased the bird lovers by an observation of a Horned Grebe (Podiceps auritus).

On May 4 a Peregrine Falcon (Falco peregrinus) was registered on the territory of the fish farm "Dneprobgusky". On May 19 another representative of this species was seen in Brest. On May 17, a male Red-footed Falcon (Falco vespertinus) was reported from the territory of the Kamenetsky district. Three days earlier 10 individuals of Falco vespertinus  were seen at once near the village of  Kremnoye (Zhitkovichi district).

It should also be noted that the first European bee-eaters (Merops apiasterthis) this year were found on May 15 near the village of Sinilo, in the Minsk district. The nearby colony of Merops apiasterthis remains the northernmost on the territory of Belarus. 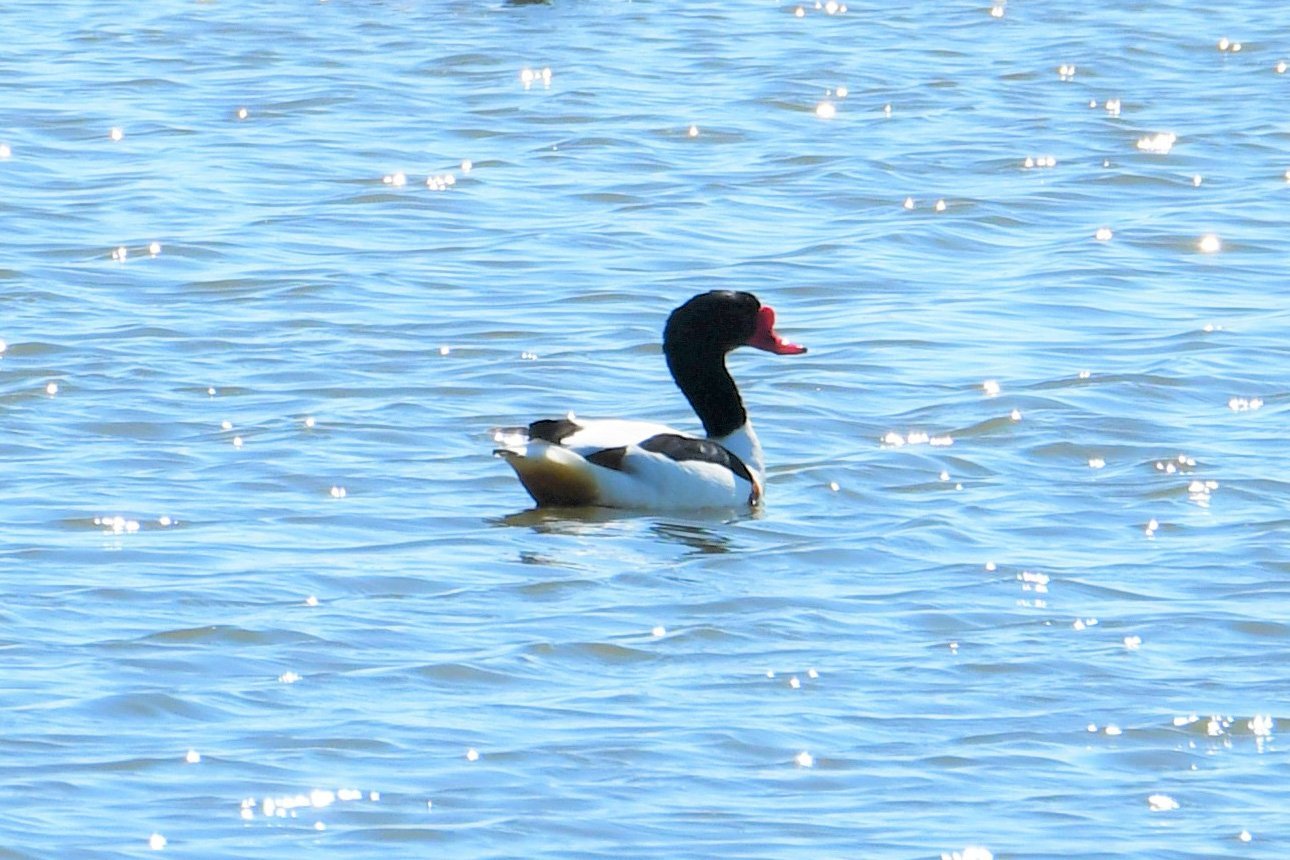 
Last month, there were two registrations of the Booted Warbler (Iduna caligata) at once. On May 31, one male of Iduna caligata was singing on the outskirts of Minsk (before that, representatives of this species had been nesting there for three years in a row), and on May 22 another individual was found in the Borisovsky district.

Tawny pipits (Anthus campestris) were seen only twice: on May 4 in Minsk, and on May 29 in Borisov. On May 8, a red-throated pipit (Anthus cervinus) was also found on the outskirts of Minsk, while another representative of this species was photographed in Borisov on May 16.

Rare birds of July 2021 Usually the middle of summer is not rich in rare finds, but this July was an exceptional one.

Chronicle of artistic counteraction to brown bears I planned to make such a report when the whole project is successfully completed.