Seven fortification cathedrals of Belarus: the prayer and firearms…

The turbulent times led to the construction of religious buildings with a defensive function on the territory of modern Belarus. When it was peaceful, people just prayed here, but in case of a threat they hid inside and defended themselves. Defensive temples were decorated with towers, narrow loopholes, round windows, and belts of machicoulis (hinged vertical loopholes) to shoot at long distances and fight at the foot of the walls. 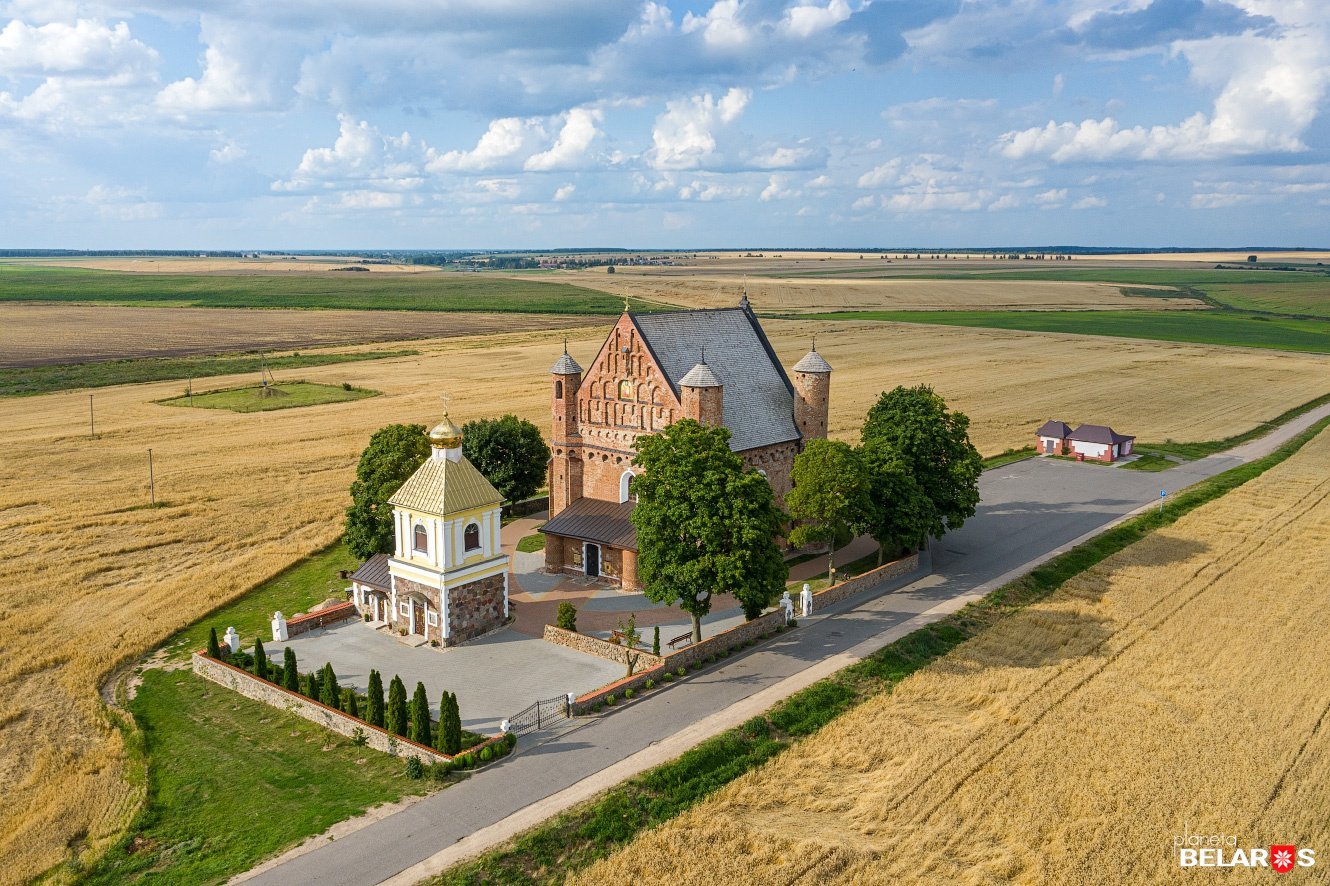 St. Michael's Church in Synkovichi has the appearance of a small fortified castle, completed in the upper part with an oriel. This rare architectural element was used as an observation point. 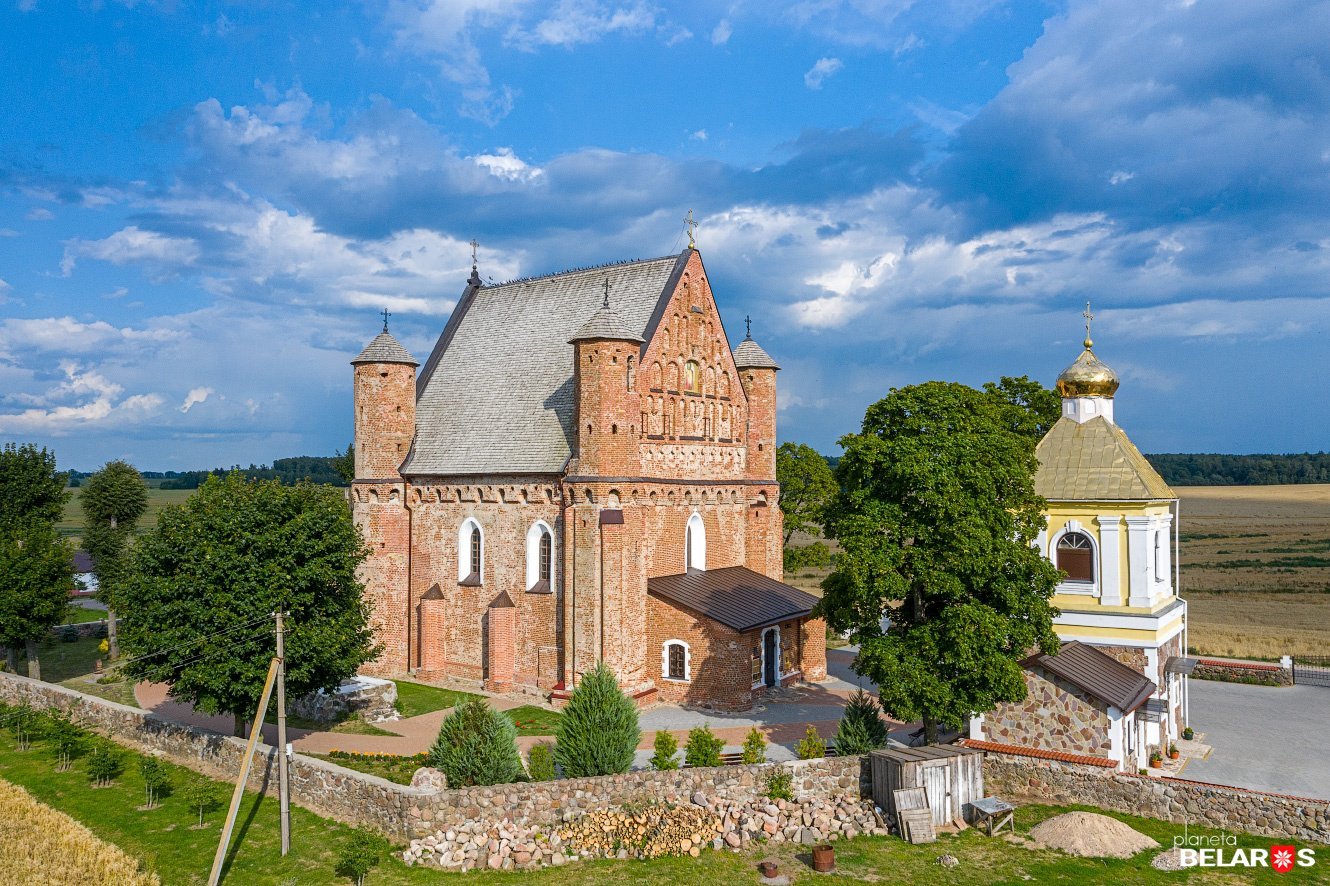 The Synkovichi Church is one of the few and earliest Gothic Orthodox churches of defensive type that have been preserved in Belarus. The thickness of its walls reaches one and a half meters (5 ft). At each corner of the building there is a tower with several tiers of loopholes. Spiral staircases in the towers led to the battle gallery in the attic. Loopholes in the pediment and round loopholes around the perimeter of the upper part of the three walls decorated and protected the temple — through them it was possible to conduct musket fire at long distances. Machicoulis were used in the case of melee. The church stands inviolably in the midst of natural expanses — it still evokes a sense of security.

2. Church of the Nativity of the Blessed Virgin Mary in Murovank
Shchuchinsky district, Grodno area 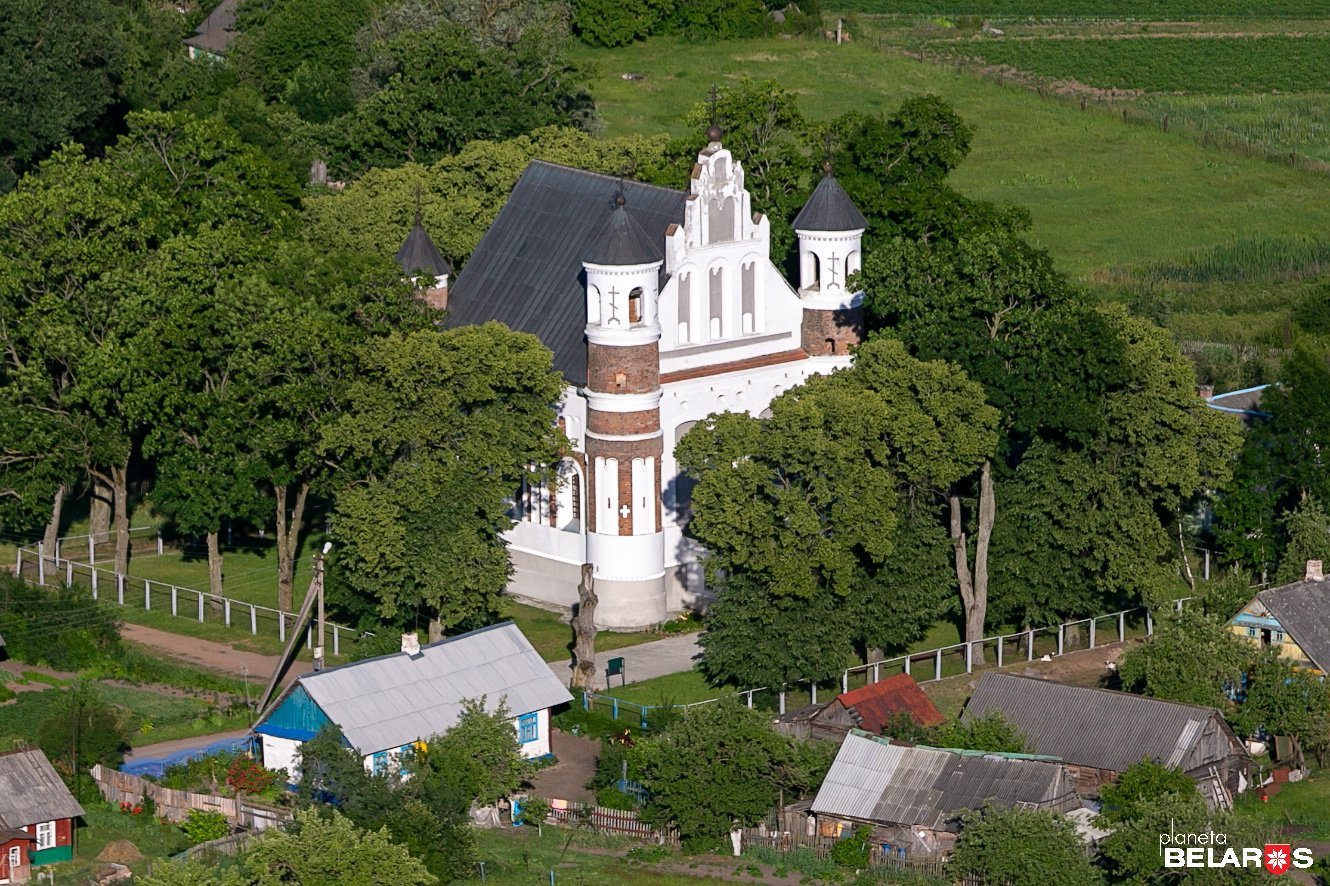 The cathedral in Murovanka was built according to the canons of defensive architecture in a reliable and thoughtful way. For a long time this church belonged to the neighboring estate of Malomozheikovo, whose owner allocated money for its construction. So now the cathedral is sometimes called the Malomozheikovo Church. 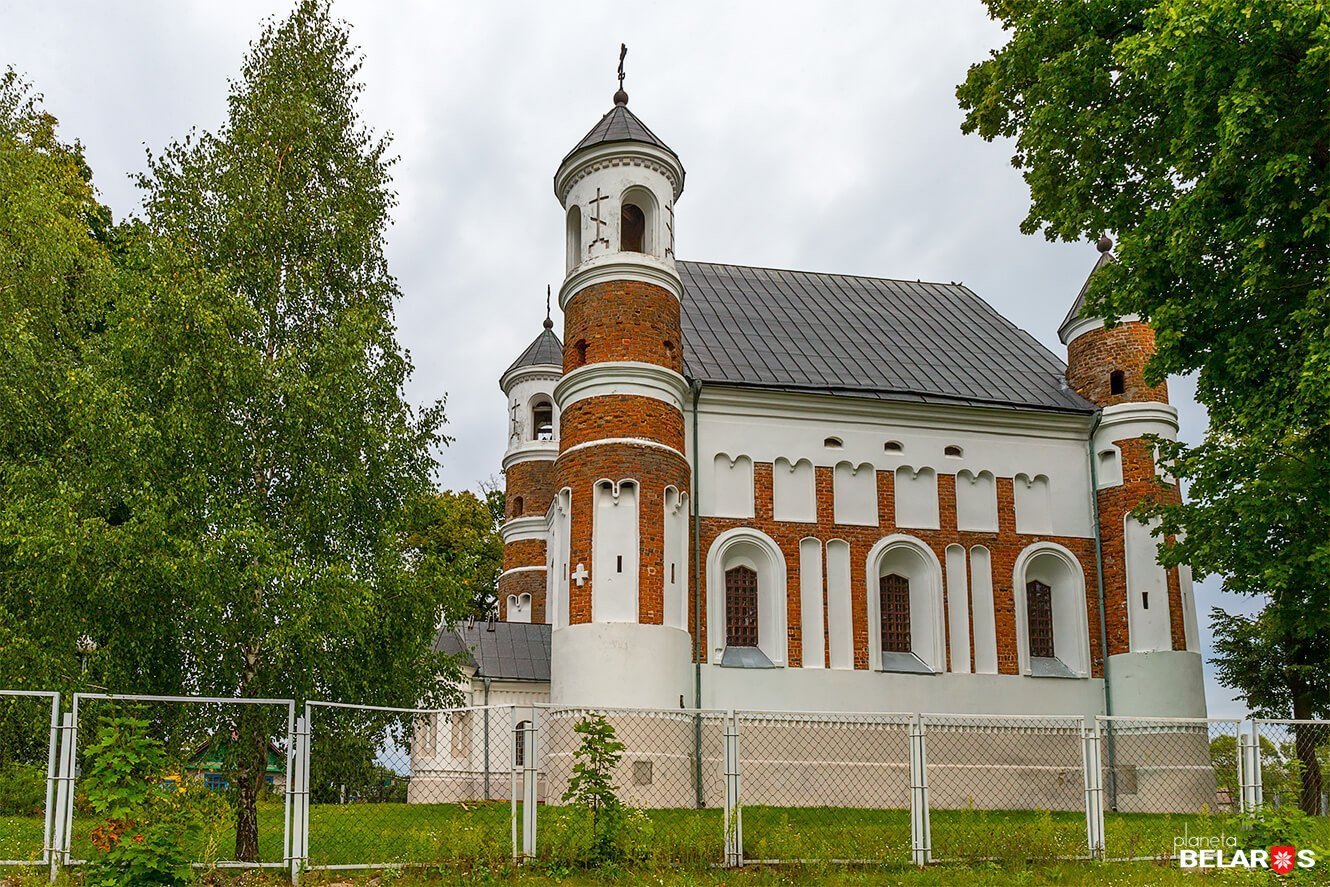 Two-meter (5 ft) walls of red brick and towers from 3 to 4.5 meters (10-15 ft) in diameter reliably protected those who were hiding behind them. Loopholes served for close and long-range combat and gave the fortness-church an invincible and majestic appearance. Numerous wars have tested its strength many times. The church was significantly damaged during the war with Russia in 1654-1667 and in the Northern war (of Sweden against the Russian Empire) of the early XVIII century.

Unapproachable from the outside, the church looks quite small inside. The sound reflectors embedded into the walls create a great acoustics there. 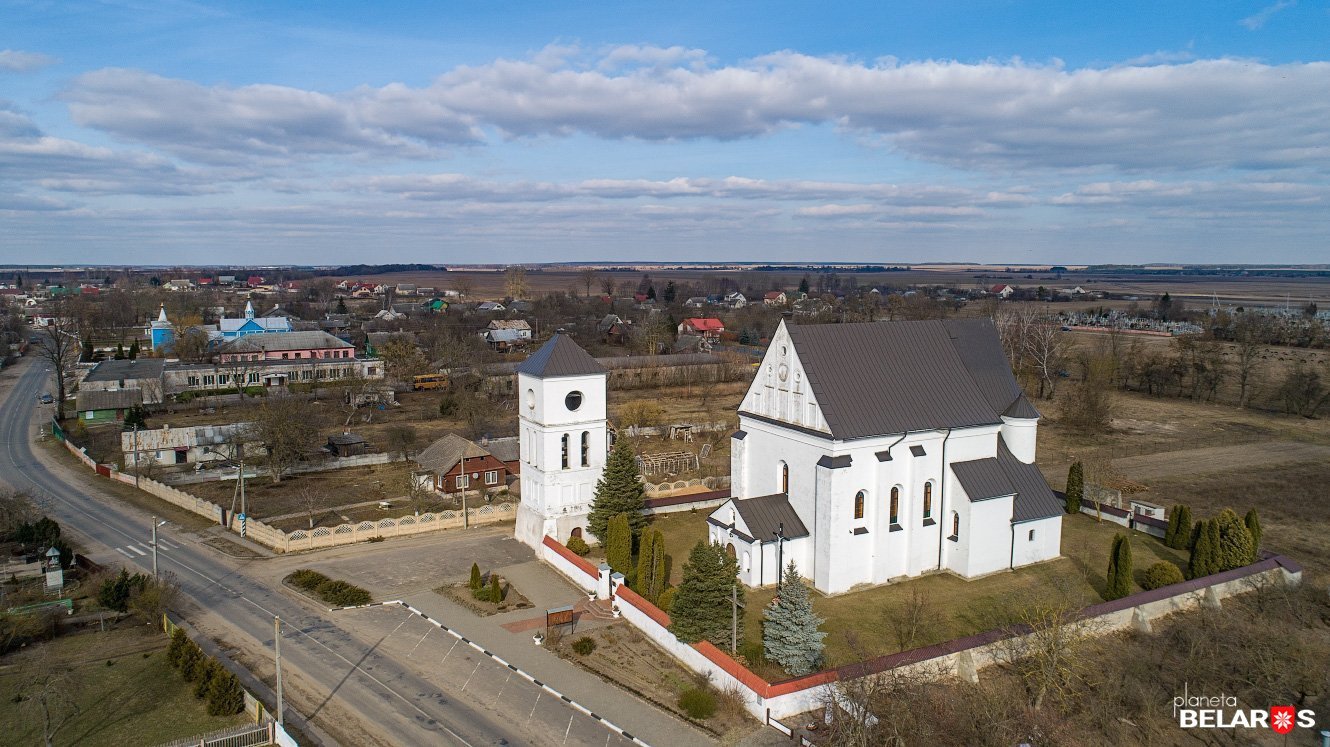 The fortress Church in Chernavchitsy was built by Swiss engineers according to the project of an Italian architect. The result is a rectangular cathedral without a dome with strong walls more than a meter (above 3 ft) thick, a round tower on the southern facade with a twisted staircase to the roof and loopholes on the gable. The floor for the archers was supported on beams that were attached to niches on the walls. 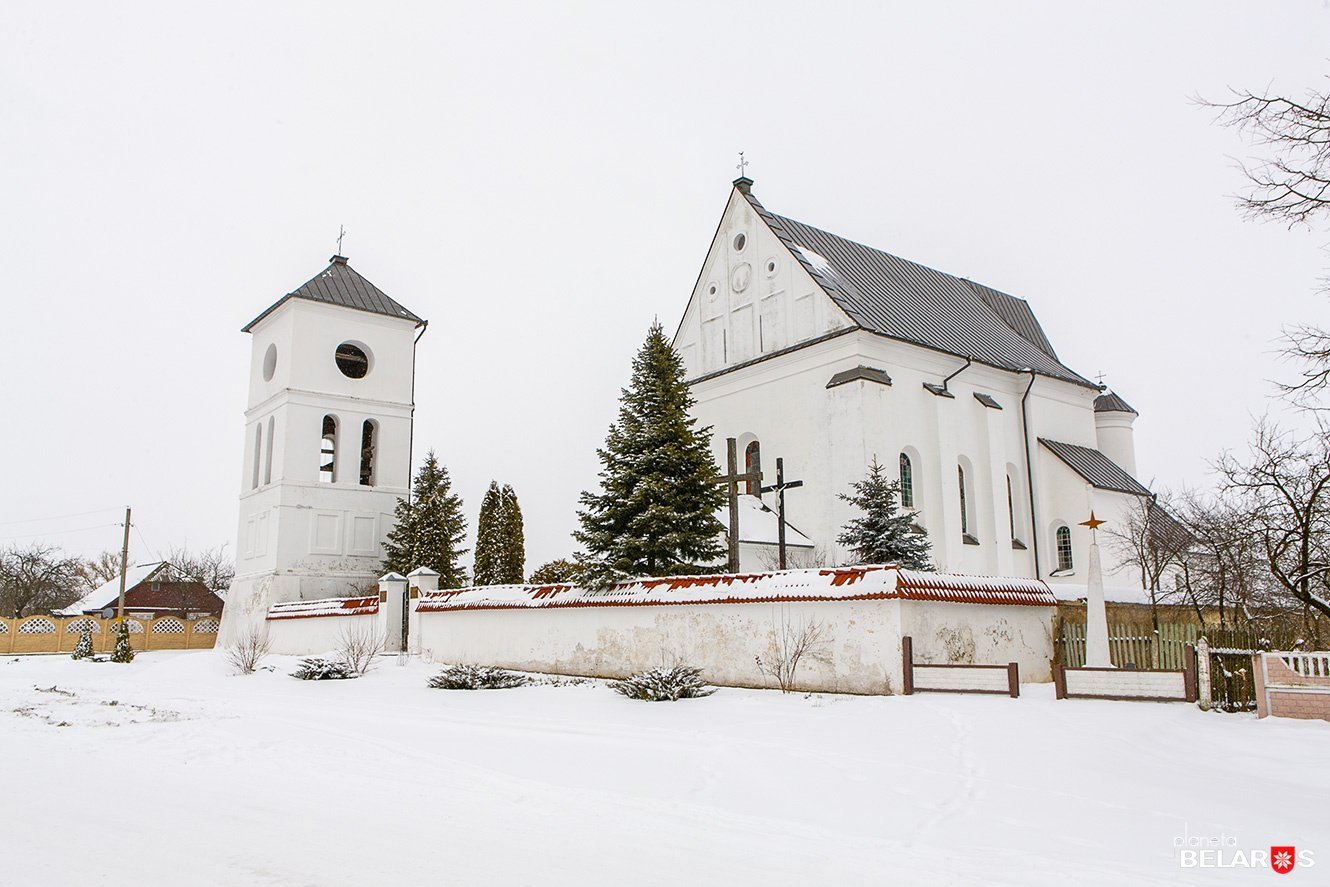 The architectural appearance of the temple combines elements of Gothic and Renaissance, as well as features of defensive architecture. The belfry included in the fence, which is compositionally reminiscent of a castle tower looks especially indestructible. Its location away from the main facade may have been due to the defensive function of the pediment.

The Church of the Holy Trinity stands in the center of the village. The main facade of the temple is turned to the road Brest-Kamenetz. 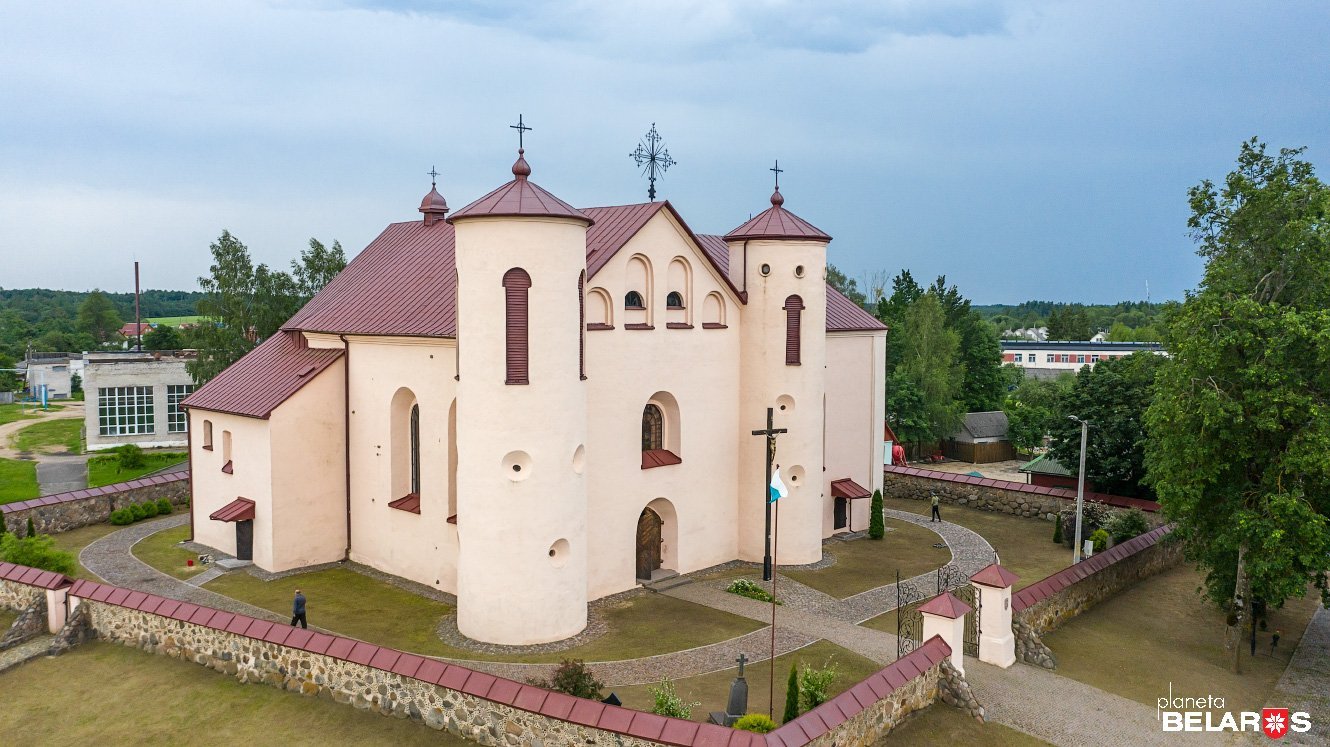 The Church in Kamay is more than four hundred years old. It is one of the few Catholic churches in the country that has operated without interruption since itsfoundation, except for a short period of restoration works. This monument of defensive architecture looks ascetic and majestic. The main facade is decorated with four arched niches with loopholes. Two round towers on the sides are 16 meters (52.5 ft) high and 6 meters (20 ft) in diameter, with high arched openings give the appearance of a fortress to this cathedral. The walls are up to two meters (almost 7 ft) thick. 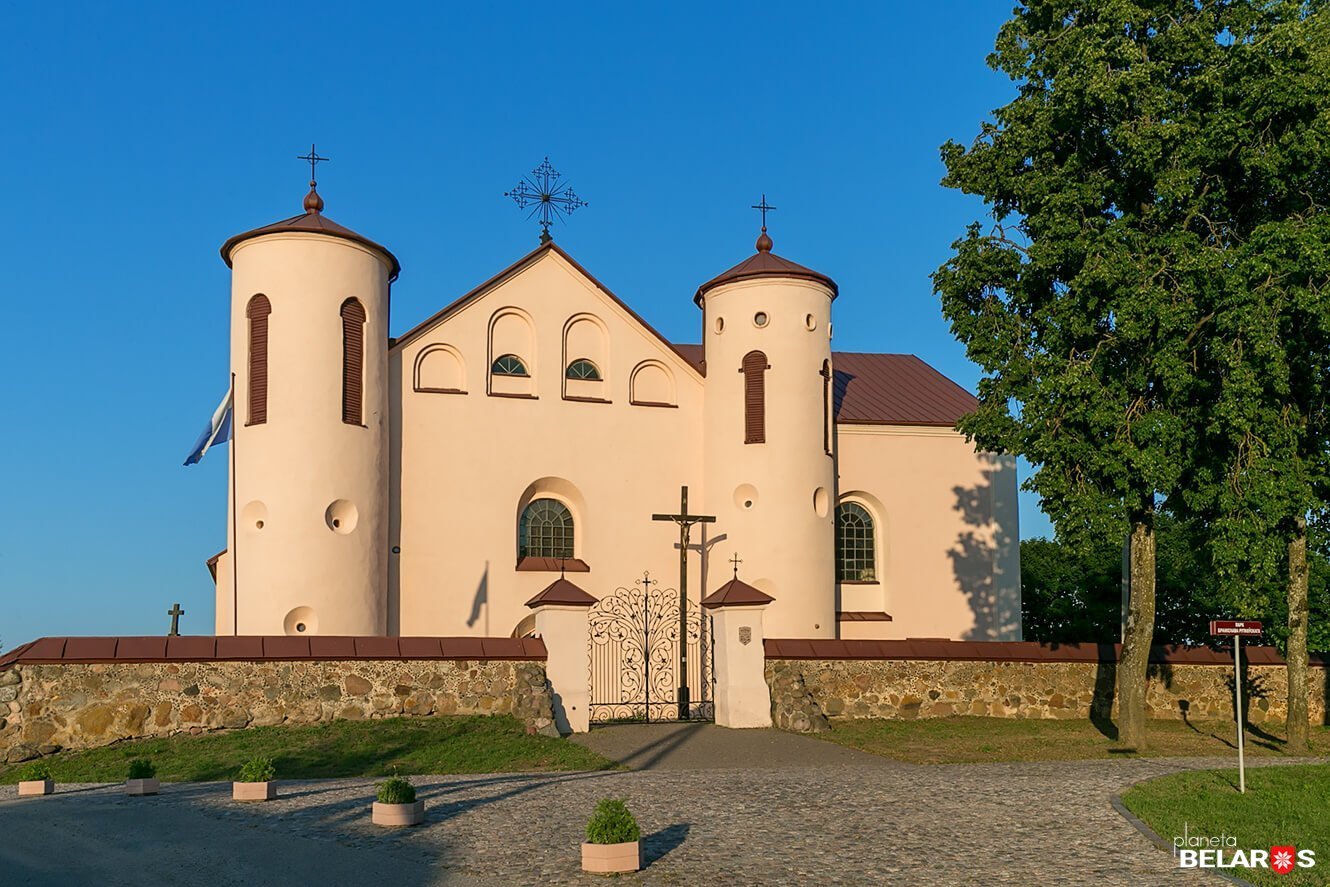 After the Northern war of 1700-1721 the Sweden cannonballs that had significantly damaged the cathedral, were immured into the walls of the Kamay Church. 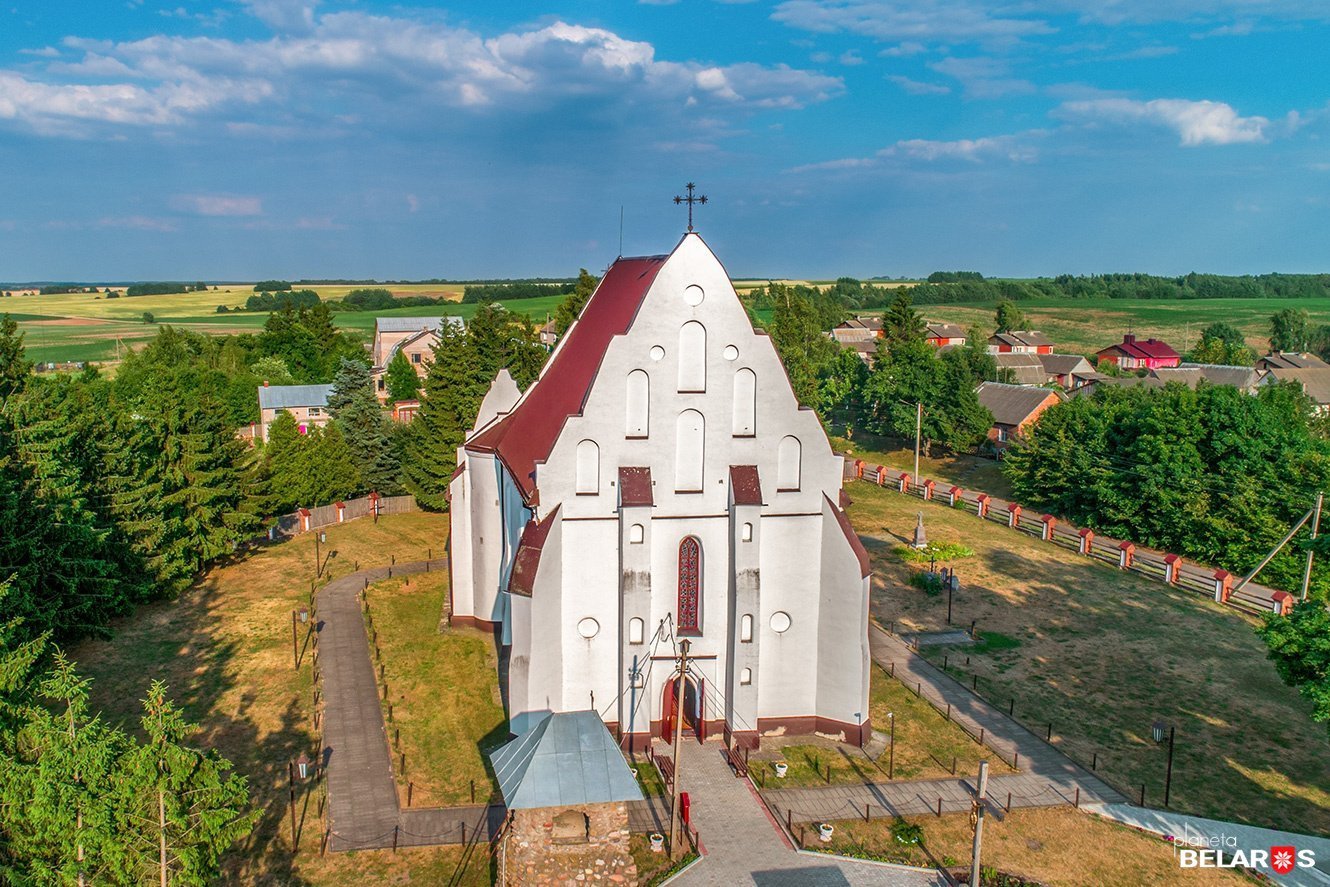 Trinity Church is a rare monument of medieval Gothic which looks like a miniature fortress. The size of the Church together with the apse is 26.4×14 meters (87 x 46 ft). This is one of the oldest Catholic cathedrals built in the 70s of the XV century, later Napoleon Orda (a famous Belarusian and Polish writer, composer, musician, and artist of the XIX century) depicted it in his paintings. 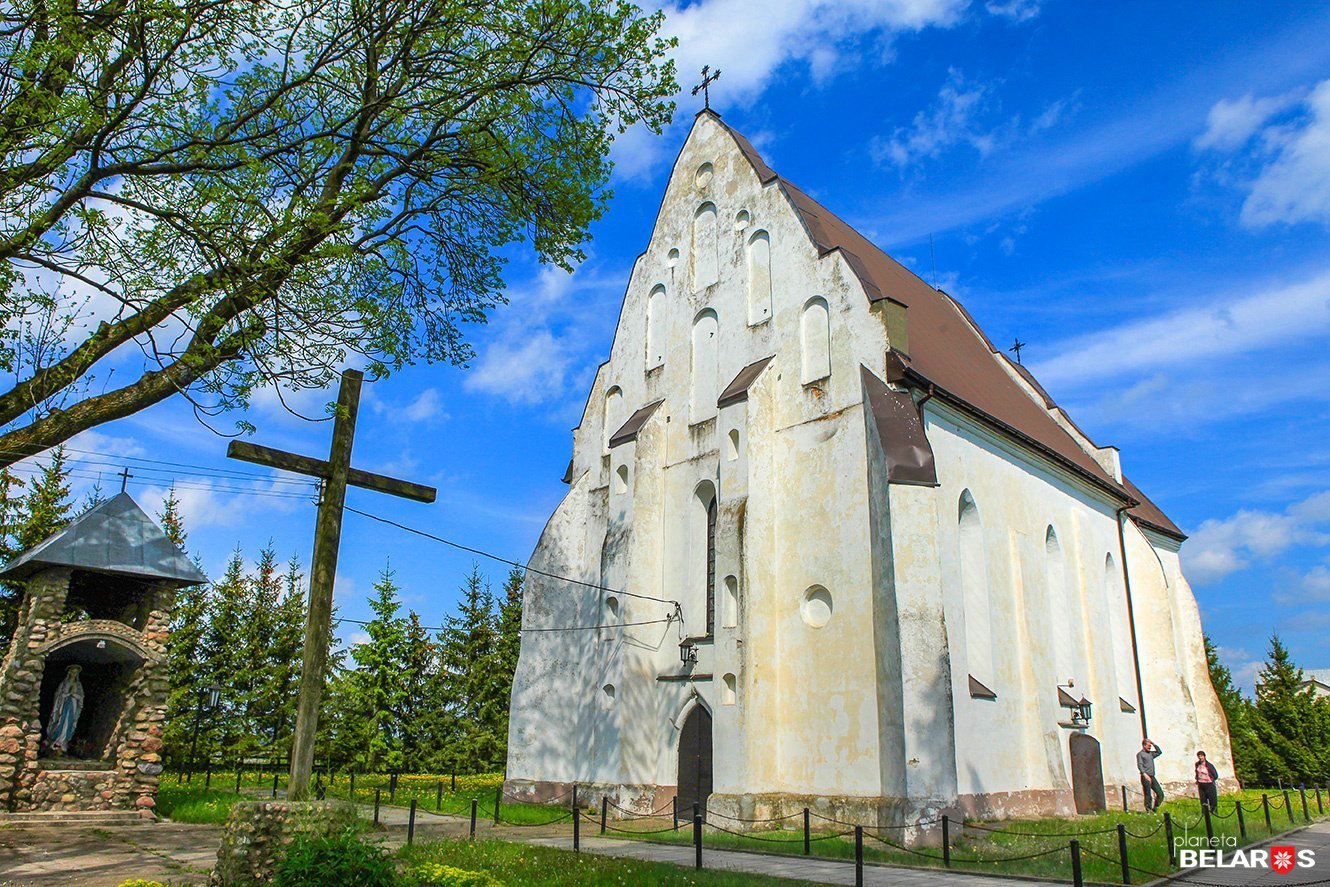 This church has no towers, but it looks restrained and laconic, decorated with a figured shield. The buttresses that strengthen the walls are narrow. Loophole-like Windows and a high gable roof give the structure the appearance of a small fortress. The location of the temple on a hill away from the center of the town also can be explained by the defensive purposes of the construction.

It is known from the manuscripts that originally the Church in Ishkoldi was surrounded by a stone fence with a gate and an earthen rampart. 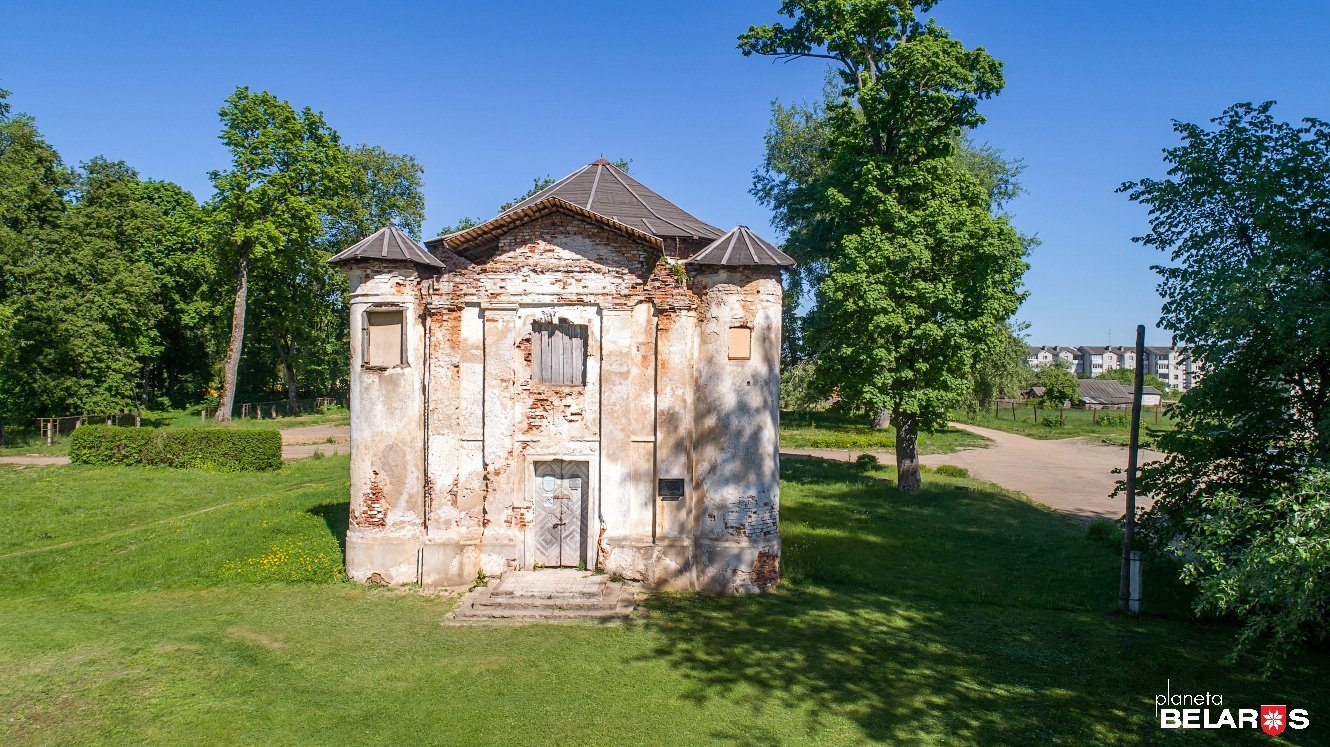 Protestant churches, which were actively built since the middle of the XVI century, were also adapted for defensive needs. Among the most famous examples is the Calvinist cathedral in Zaslavl.

The Calvinist church of the defensive type in the former Kuhtichi estate in Pervomaisk is less known and requires attention, since it is dilapidated now. A small temple was built by the owner of the estate a its inhabitants — at that time the estate belonged to the translator and book publisher Matei Kovyachinsky. In case of danger the local residents were supposed to hide behind the one-and-a-half-meter (5 ft) walls of the church. Towers and a hipped roof make the temple to look as a castle. 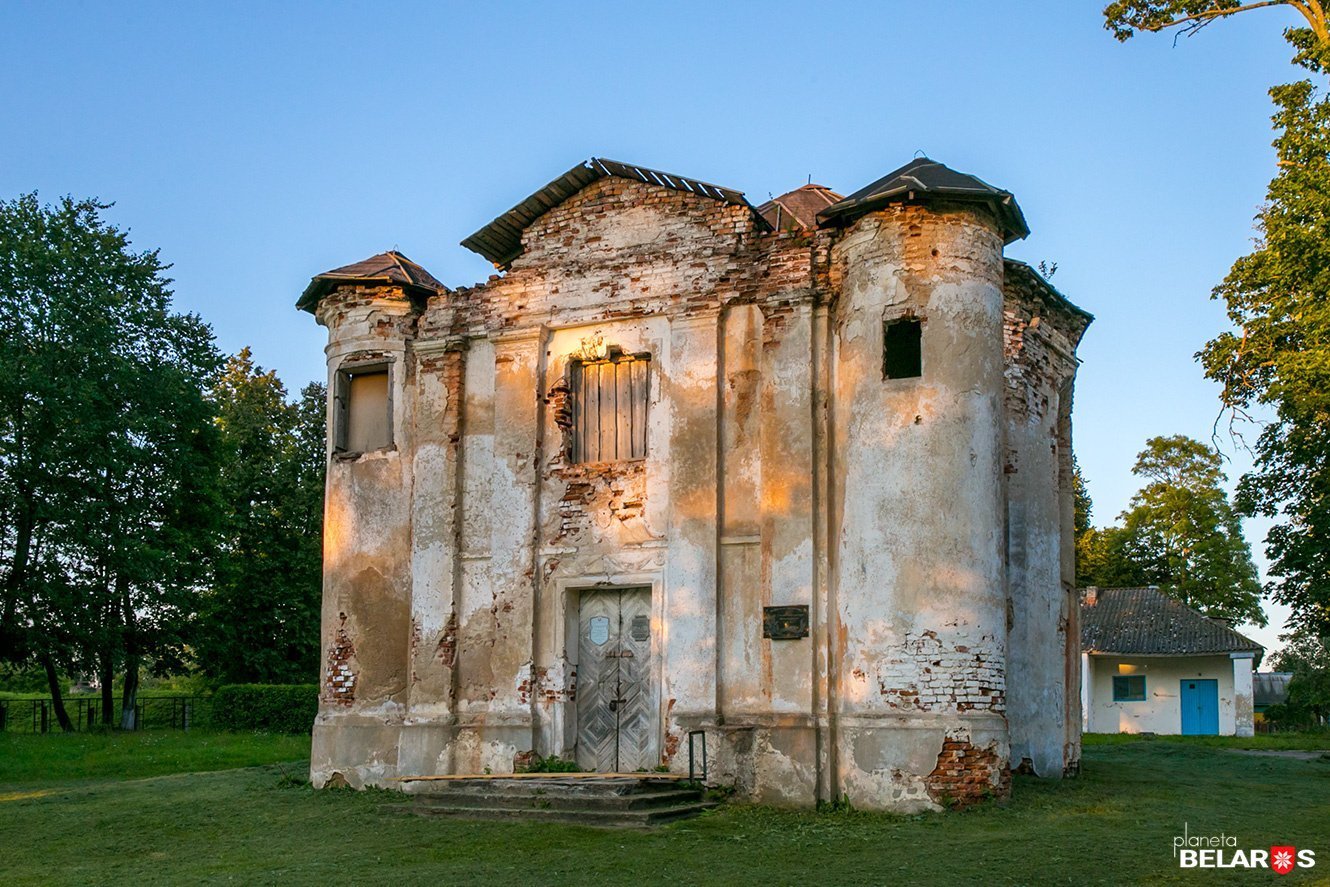 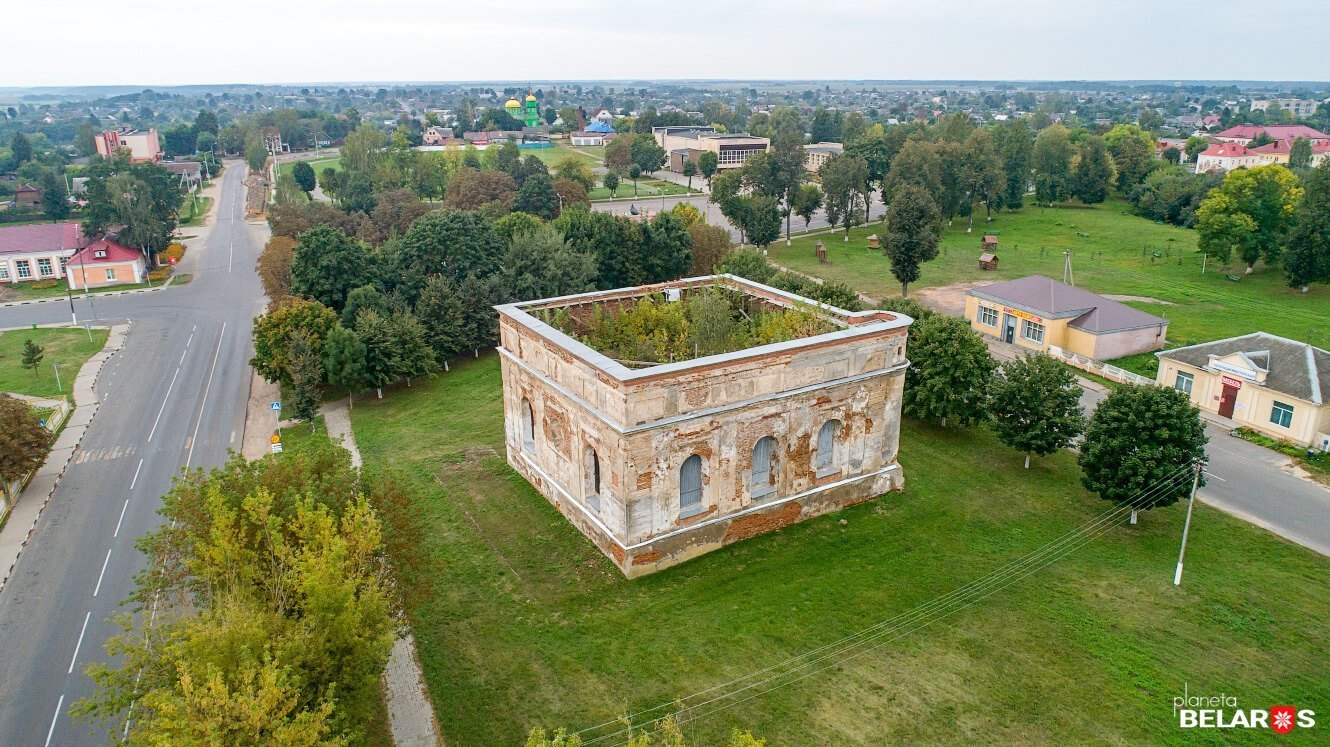 Powerful two-meter (almost 7 ft) walls reliably protected those who sought shelter in the main Bykhovskaya synagogue. The area of the synagogue is 20×21 meters (66 [ 69 ft] with a cylindrical defensive tower at one corner. Steps were connecting the basement and attic, leading to rectangular and semicircular loopholes in the narrow second tier, which was separated from the main facade by a thin cornice. Later, the loophole niches were bricked up. 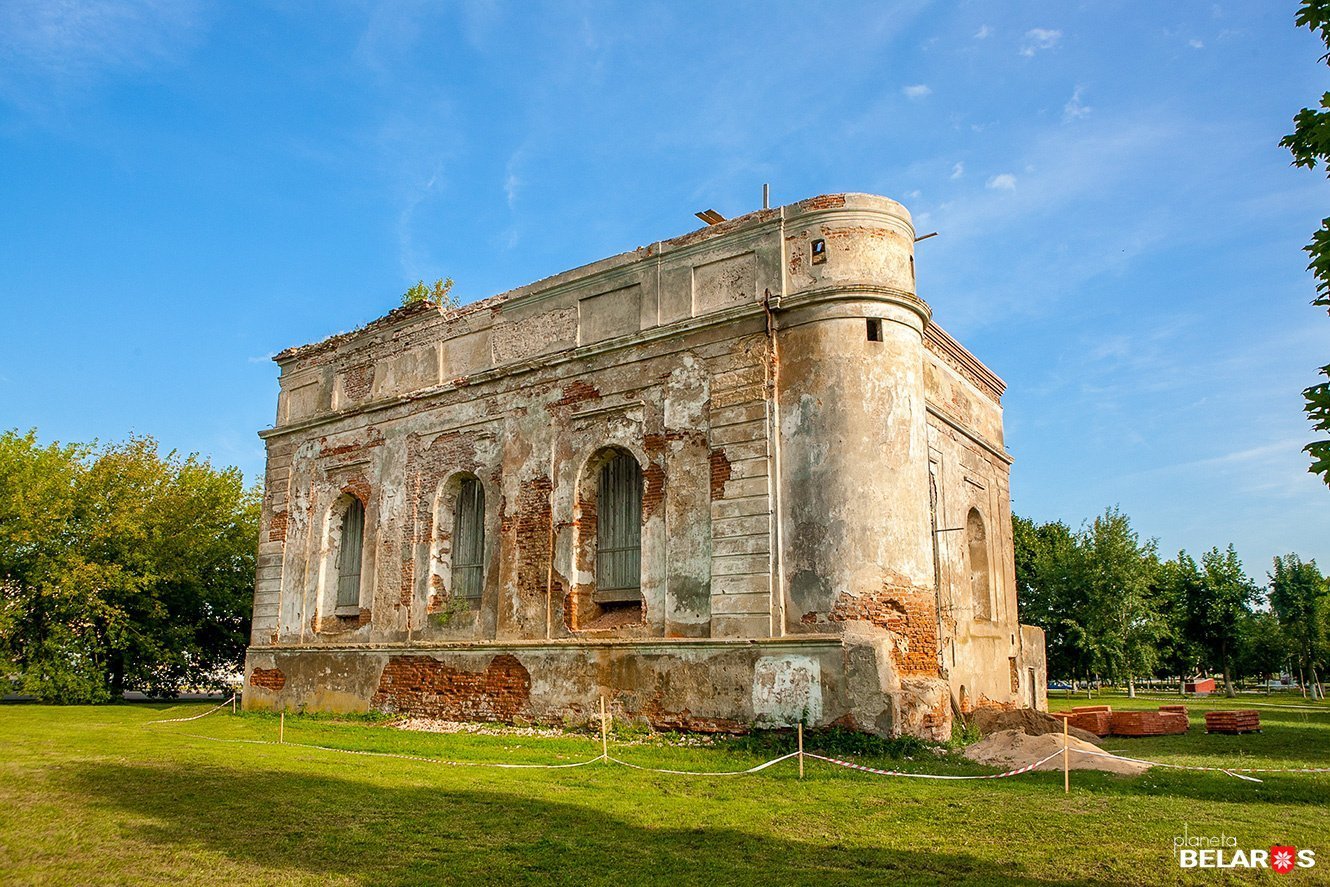 Semicircular windows in the thick walls of the Bykhovsky synagogue are located quite high from the ground  for the greater safety of those who were inside.

The synagogue stood in the North-Western part of the Old Bykhov downtown, not far from the city wall with the Mogilev gate.