The tragedy of the Stasino tract. History of one of the largest graves in Belarus

In 1942, the Germans eliminated the capital's ghetto. The huge foundation pit dug before the war by Soviet prisoners under the underground hangars of the future airfield became the grave for 12.5 thousand people. In Stasino tract Jews, Belarusians, Ukrainians and Russians were shot. There are less than 5 thousand inhabitants left in Stolin itself, although before the war there were about 13 thousand people living here. Today there are two monuments at the site of the shooting, in the middle of the forest.

Stolin and its inhabitants before the war

By the end of the XIX century, the population of Stolin was mostly Jews (according to the 1897 census, 2489 out of 3342 were Jews). From 1921 the city became part of Poland. This period saw the heyday of Stolin's economic activity. By 1941, there were already about 13 thousand people living here (as today), and the Jewish community numbered 8.5 thousand. 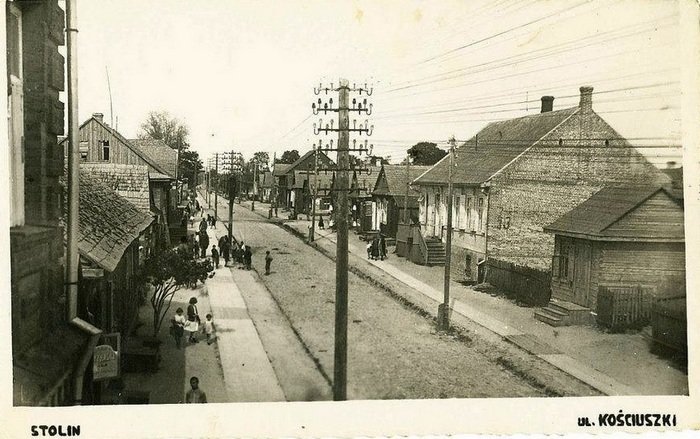 In 1939 the Soviet power came to the territory of Western Belarus. Jewish communities had been liquidated and their property nationalized. Arrests and repression have begun. Leaders of Jewish organizations were arrested and resettled in remote regions of Russia. It allowed them to survive because the fate of the Jews who remained in the capital was tragic. 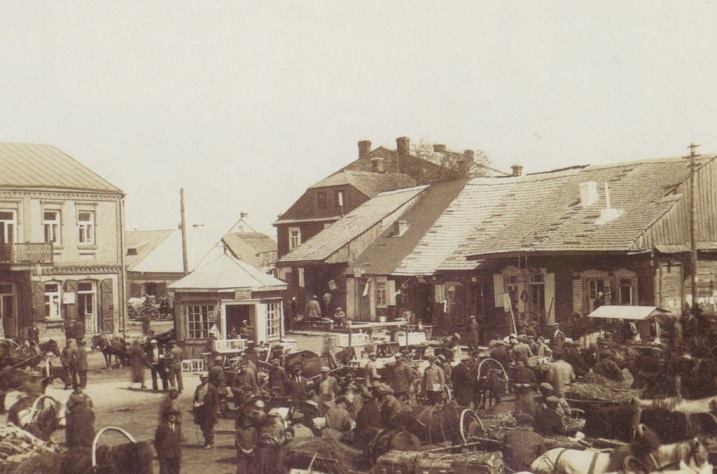 Starting a war, living in the capital's ghetto

After the beginning of the Great Patriotic War Stolin was occupied by the Germans already by July 12, 1941. And in the spring of 1942, the Nazis created a ghetto where they drove the Jews of the city and the surrounding villages. It was organized by the Judenrat, a Jewish government body headed by a Warsaw Jew, Berger.

Many restrictions were imposed on Jews in the ghetto, for violation of which the Germans immediately shot them. Everyone had to wear yellow star patches, and after 7 pm the Jews had to be at home behind closed shutters. 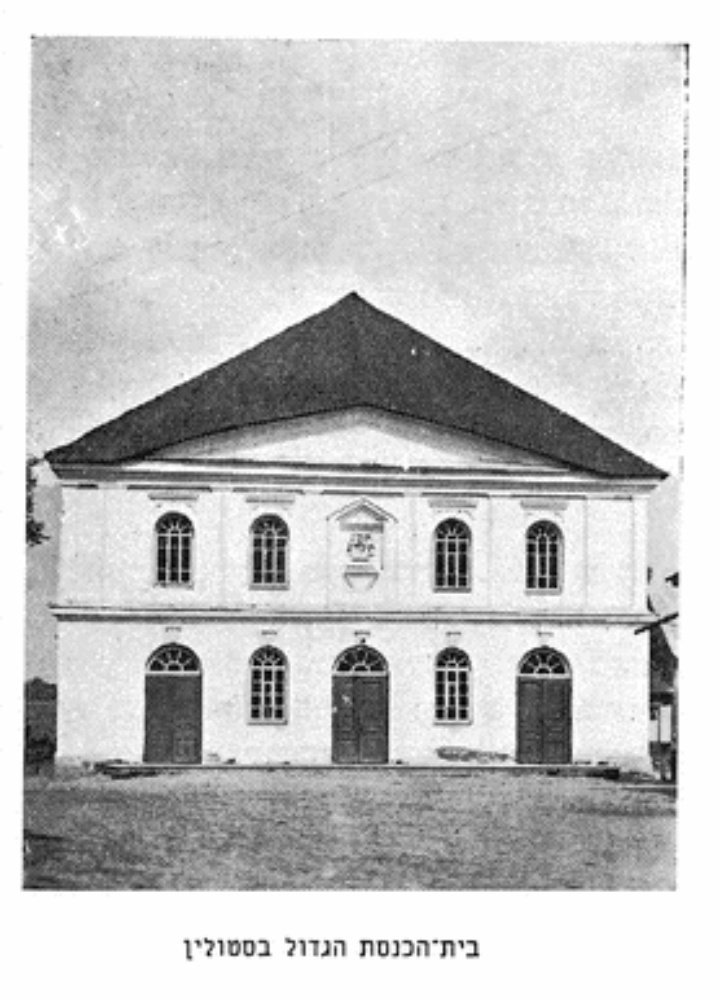 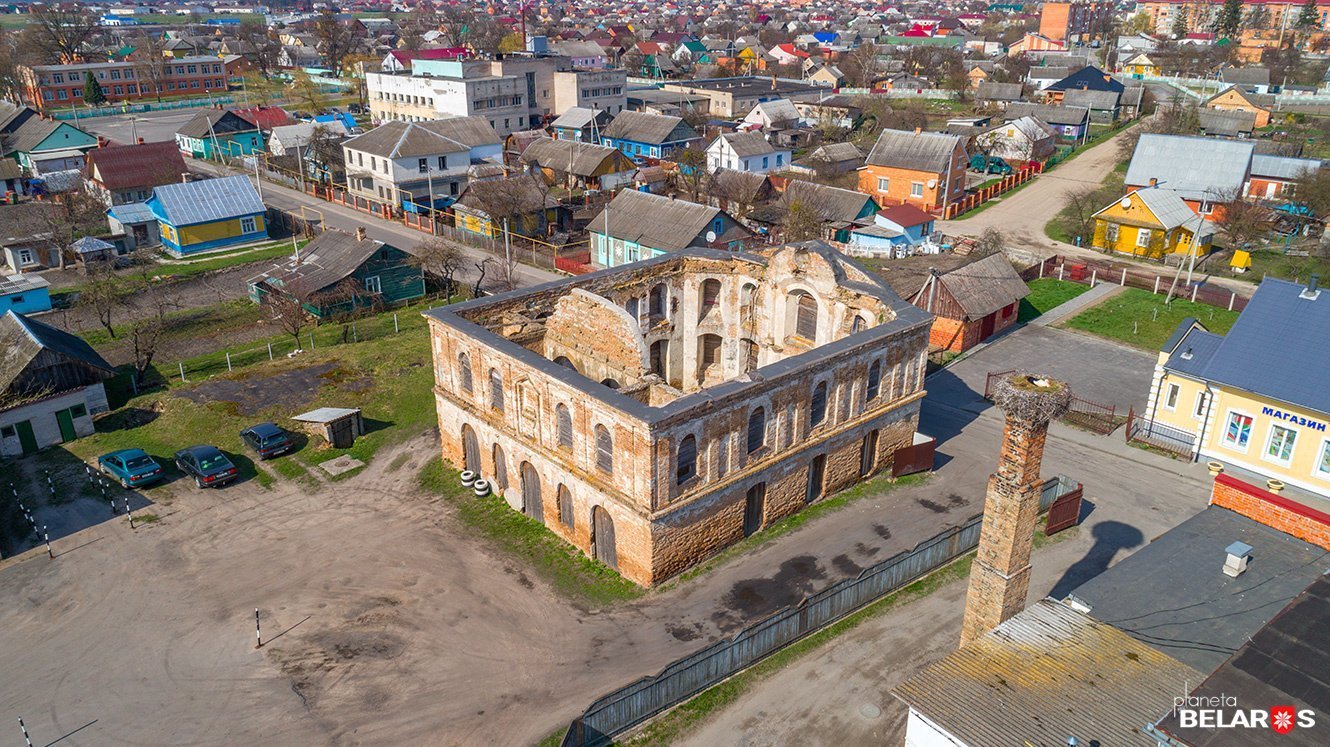 There was hardly any food in the ghetto. Jews working outside could sneak something in their pockets. According to memories, in spring in the cellar of one of the houses managed to hide a cow for a while. There was practically nothing to feed her, and the small amount of milk she gave was supported by the elderly Rabbi Perlov.

Each month the Judiciary was obliged to pay tax on 10 rubles per person and submit a certificate on the number of live persons. Every day, ghetto prisoners were forced to dig ditches a few kilometres from Stolin in the Folkwark of the Valleys. Masters (potters, carpenters) were forced to work almost around the clock.

Up to 12 people died every day from hunger and exhausting labour. It lasted until September.

The liquidation of the ghetto. Shots fired at the Stasino tract

On the morning of September 11, 1942, all Jews in the ghetto were driven to Market Square. People were lined up in batches of 1000 people and taken to the northeast outskirts of the city. There, through the fields, they led to the place of the murder - a huge foundation pit 300 by 100 meters in size and up to 10 meters deep in the Stasinsky forest. 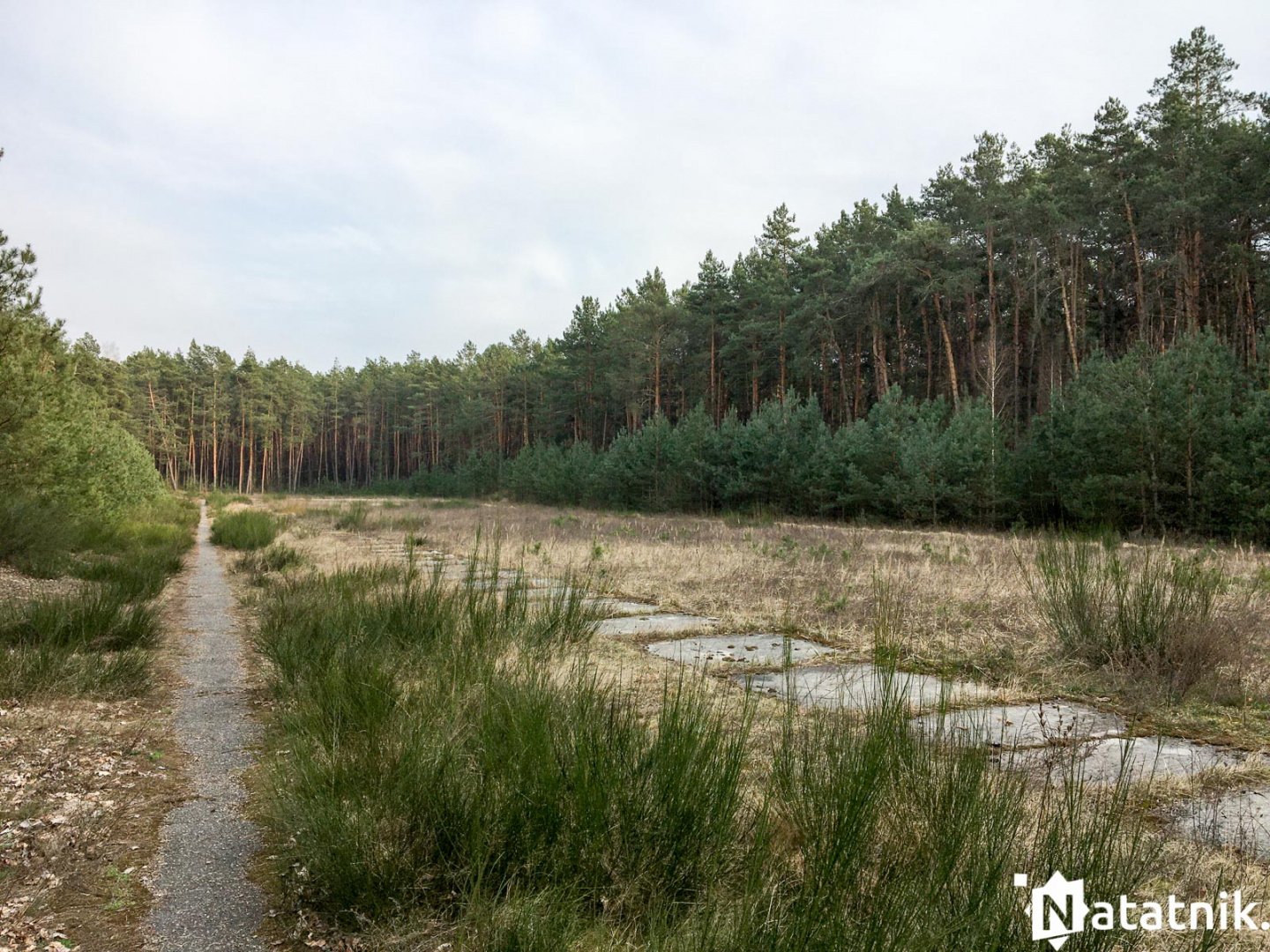 Many of the exhausted fell unconscious on the way and the police at the end of the column pulled them aside and shot them in the back of the head. The bodies of those killed in the carts were also taken to the pit. In front of the pit, people were ordered to undress and put their clothes and shoes together separately. Then the Jews were lowered into the pit, forced to lie in rows with their heads down, and the SS soldiers walked on their bodies and shot them with automatic rifles. In two days, September 11 and 12, all prisoners of the Stolin ghetto - about 7000 people - were killed.

In the book "Memory. Stolinski Wounded indicates that some of the wounded managed to get out of the pit at night. They were hiding in the woods in the Polish cemetery, but they were found there and shot. In the fifth column, which was led before sunset, there were many young Jews. Some of them rushed to escape. Many Germans managed to shoot many, but some managed to escape. When after that escape the Germans collected the bodies of the dead, they also found the body of the dead SS.

The shootings were carried out from 1942 to July 1944. Apart from Jews, residents of other nationalities were also killed here. 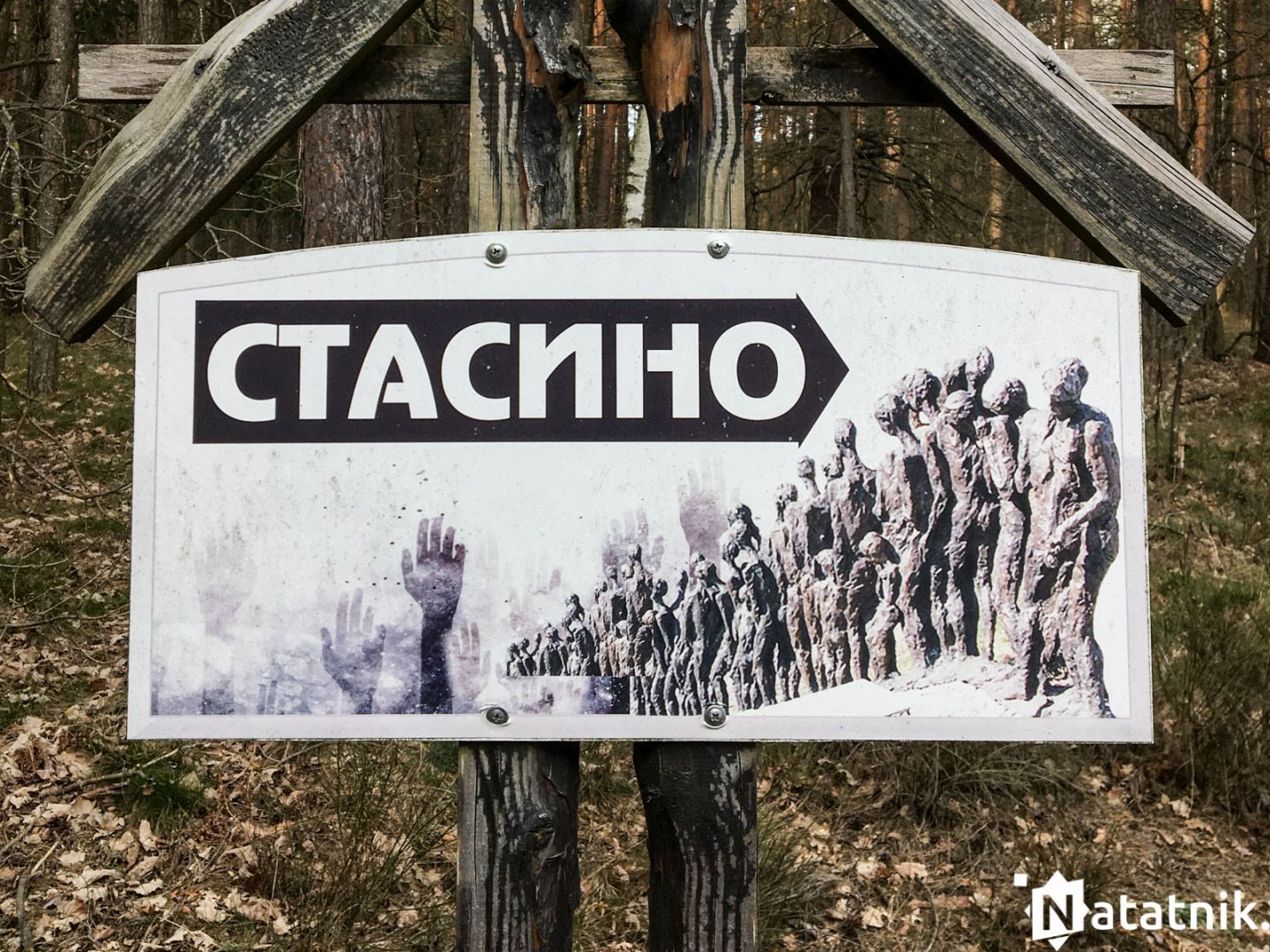 The Pinsk Archives has preserved the "Act on crimes committed by the Nazi invaders in the Stolin district", drawn up on April 14, 1945. The commission, which drew up the act, found that a total of 12,500 people were shot in the Stasino tract over the years. This is one of the largest graves of civilians in Belarus.

Today two monuments have been erected in Stasino tract. One as an open book was erected in September 1993 by order of the Kiev Jewish Community. 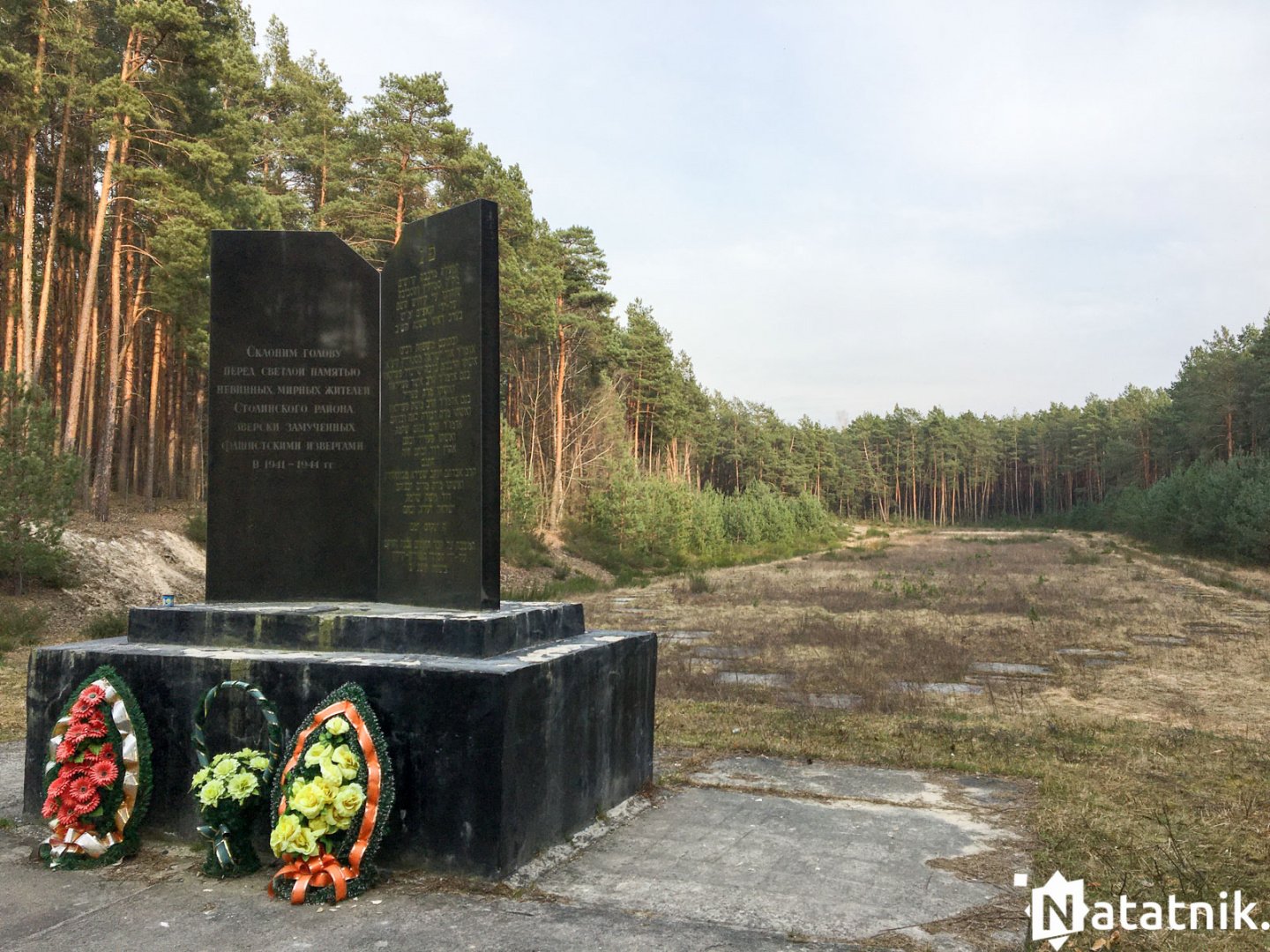 The second - a sculpture of a woman with a child - was made and installed by order of Stolin District Executive Committee in 1969. 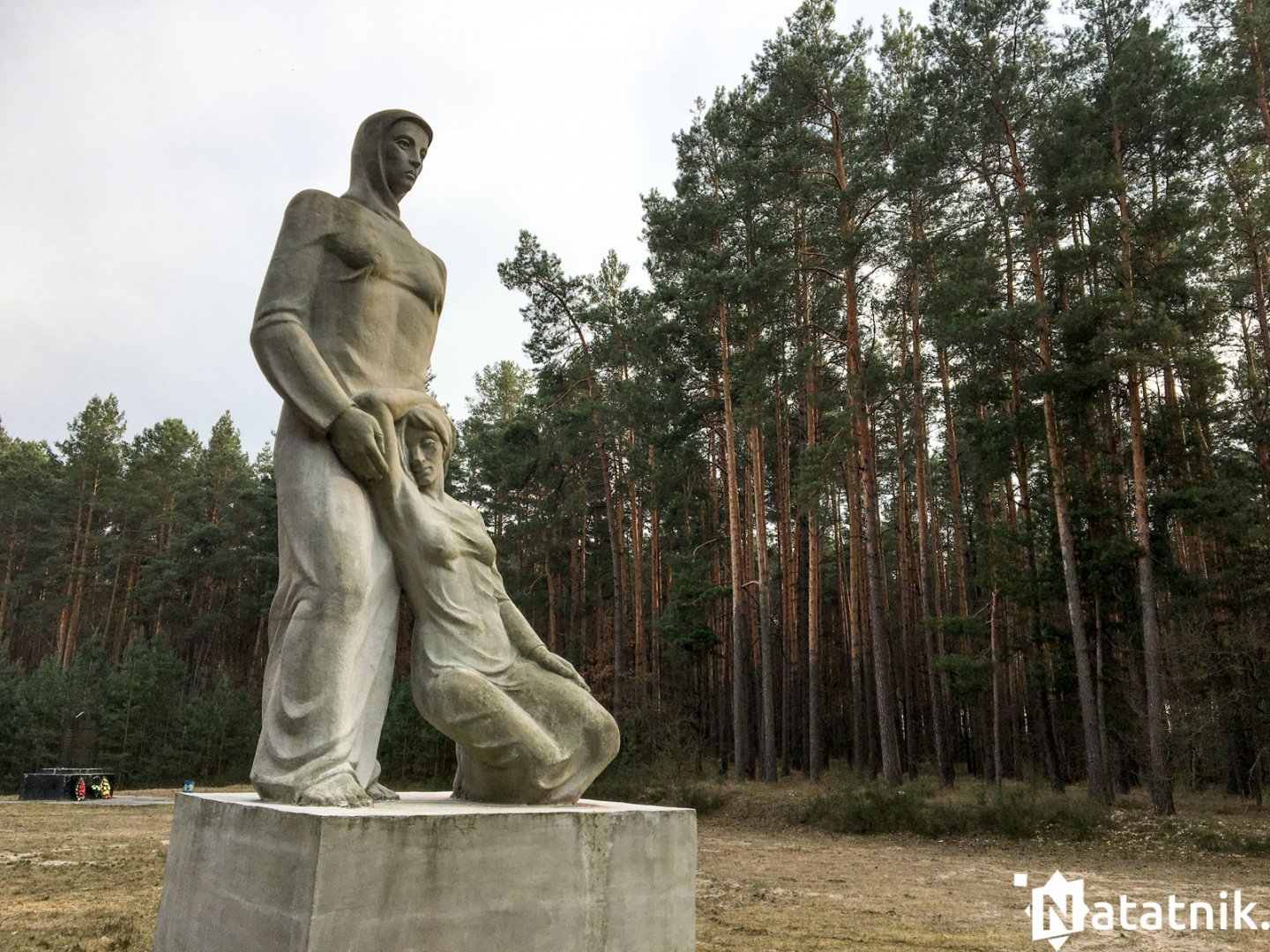 To get to the monuments you need to drive from Stolin on the highway P88 towards David-Gorodka. Behind the village of Mankovichi there will be an exit to the right with a sign.