If you've been thinking about walking along the banks of the Vileysky reservoir, you can't find a better month than November. The water level is already low – water is usually drained from the reservoir during the winter, so now you can get to any spot of the coast that is inaccessible in the summer. Well, only if the November frosts will help you to pass through the muddy slush that has been impassable so recently…

The gold of October has dropped down from the trees, the forest is clear and transparent; only the young growth still has yellowed leaves hanging here and there. And the alder trees do not hurry to throw off their leaves: they’re still quite green and fluffy.

November is a month in which one can face both early autumn and fierce winter. This is what causes the greatest difficulty in equiping before a walk. But it's better to dress warmer, the water is already pretty cold, and the winds of November are not pleasant, especially near a large reservoir.

The unpredictability of the weather encourages you to go ashore at the first opportunity, if you want to enjoy a walk. And if you have a camera, you y have to hope for luck! I will try to illustrate my thoughts about luck with my own experience and photos.

I had already known quite well the not very large, but quite picturesque part of the reservoir's shore, both in its North and in the South. On November 4, snow suddenly fallen, the sky was cloudy, and the weather wasn’t lovely at all… But on the morning of November 5, I was already wandering along the banks of my favorite river Greznitza, which flows into the vileyskoe reservoir. It was beautiful – white snow lied on the trees, and dark water flowed slowly along its bed. And my patience was rewarded! By lunchtime, some gaps started to appear on the sky - it was time to hurry to the north bank, to the Pine Tree!

The frost has already taken a thin layer of ice not only the coastal part of the water, but also a fairly large part of the reservoir. Only on the riverbed of the Vilia River the frost had failed to create an ice shell. The sky was reflected in the thawed areas on the surface of water – it's not even noon on the clock, but you can feel the frost coming. 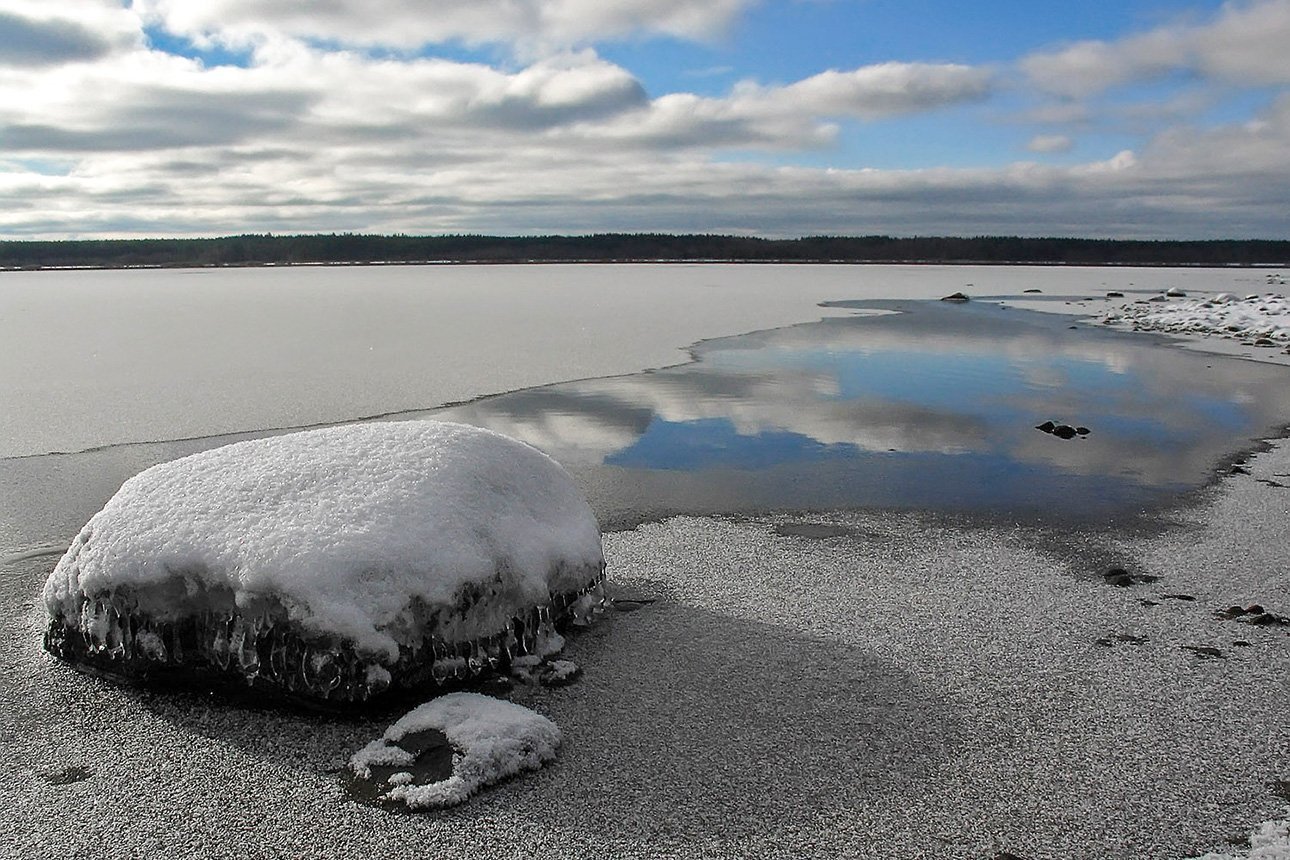 The most magical time comes now, which is so loved by photographers. This magic lasts a little less than 10 minutes that I will always remember. … Magic colors, long shadows from small objects, great light... To see this is an undoubted success, and it does not matter if you have a camera with you – just stay still and enjoy the spectacle… 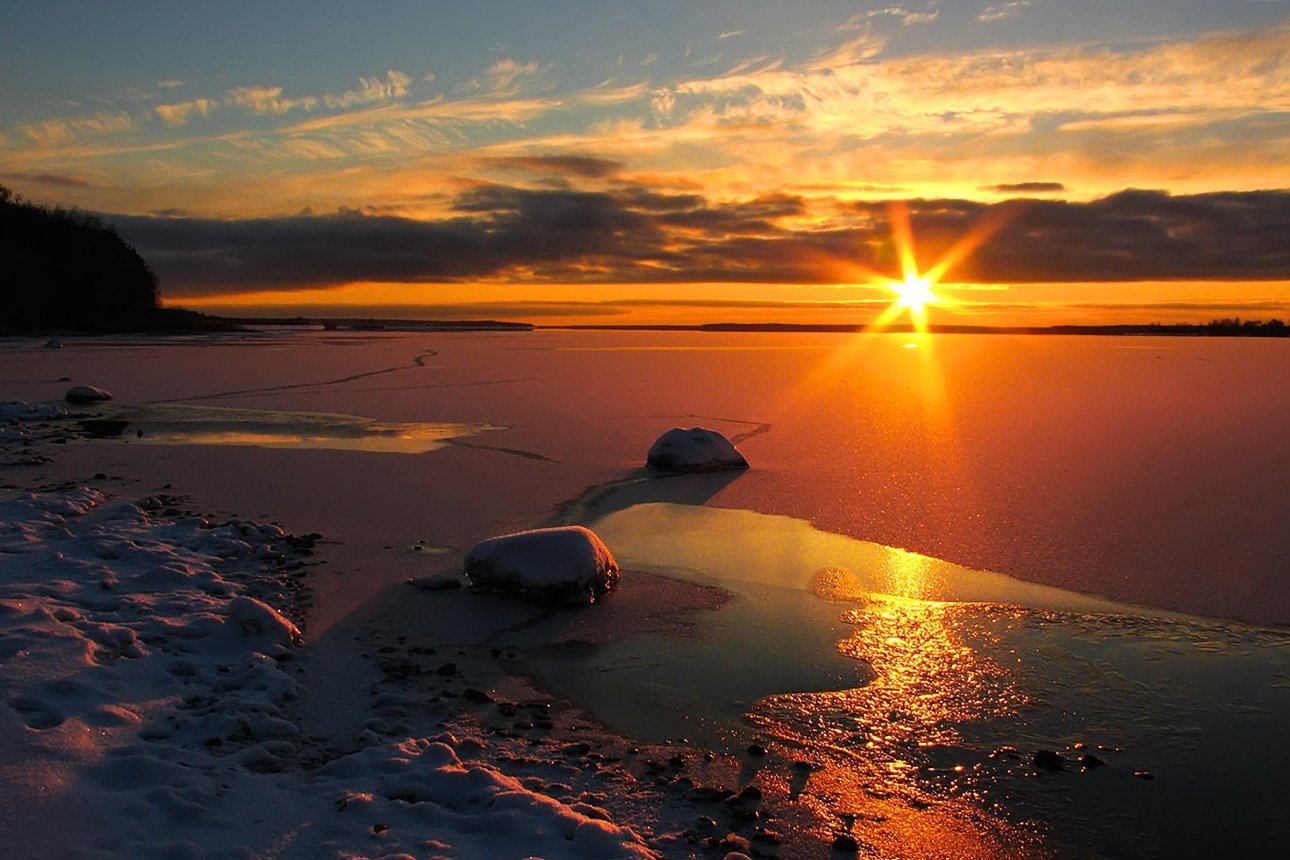 The colorful sunset passed a right signal: in the morning a thick frost enveloped everything around, the night freezing and high humidity had created this beauty! 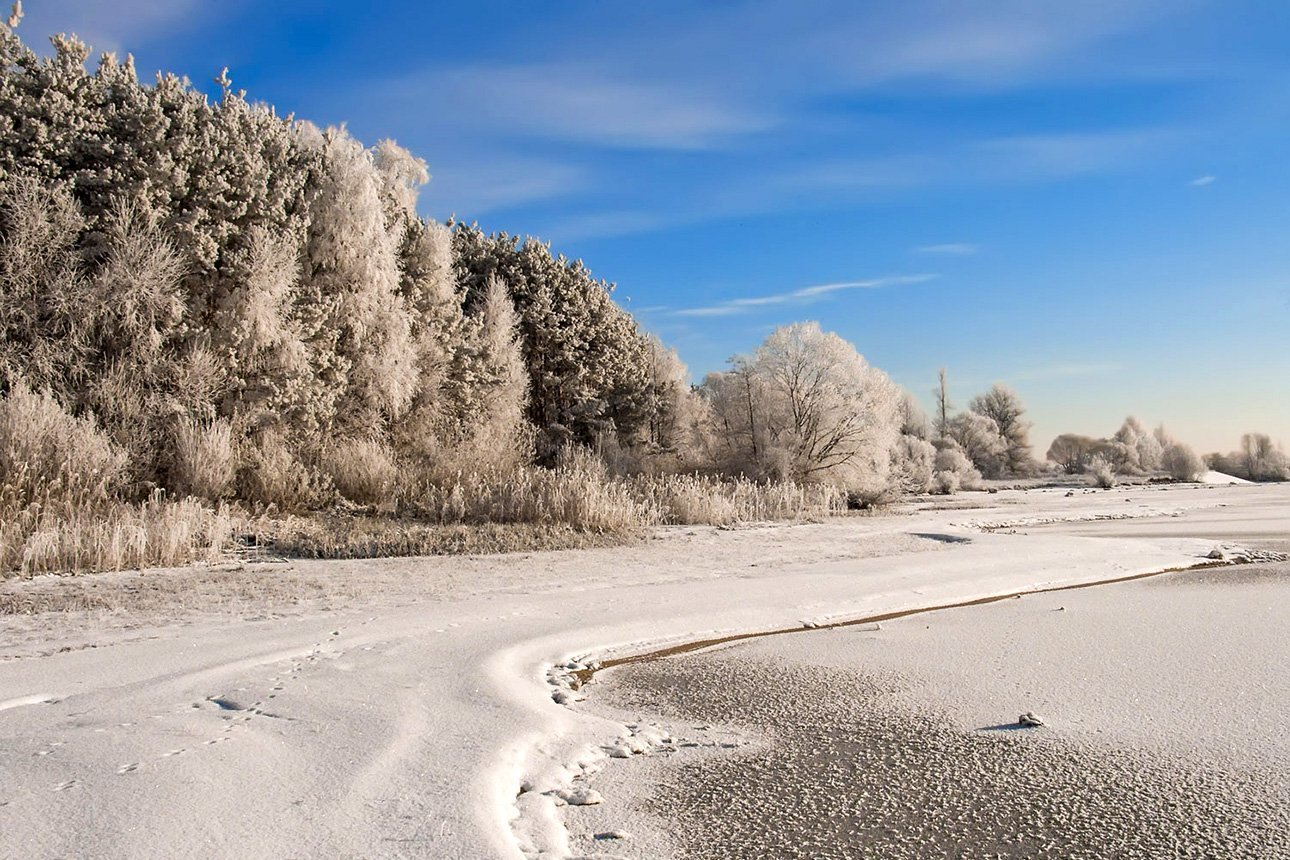 A few days later, the frosts receded, because it was too early for them. And the gray monotonous autumn returned again. Real snow fell only in mid-January 2007, and frosts came even later...

It was November this year, warm and gloomy as usual. But it was necessary to visit my familiar places: at any time of the year I feel great here. Neither wind, nor rain should disturb communicating with Nature. But even in this cloudy month, there are days when the sky suddenly opens for a couple of hours, and the blue, albeit faded, autumn sky is reflected in the reservoir and coastal puddles. Only by the New Year winter came finally to its senses and poured snow, brought frosts that covered all reservoirs with ice. 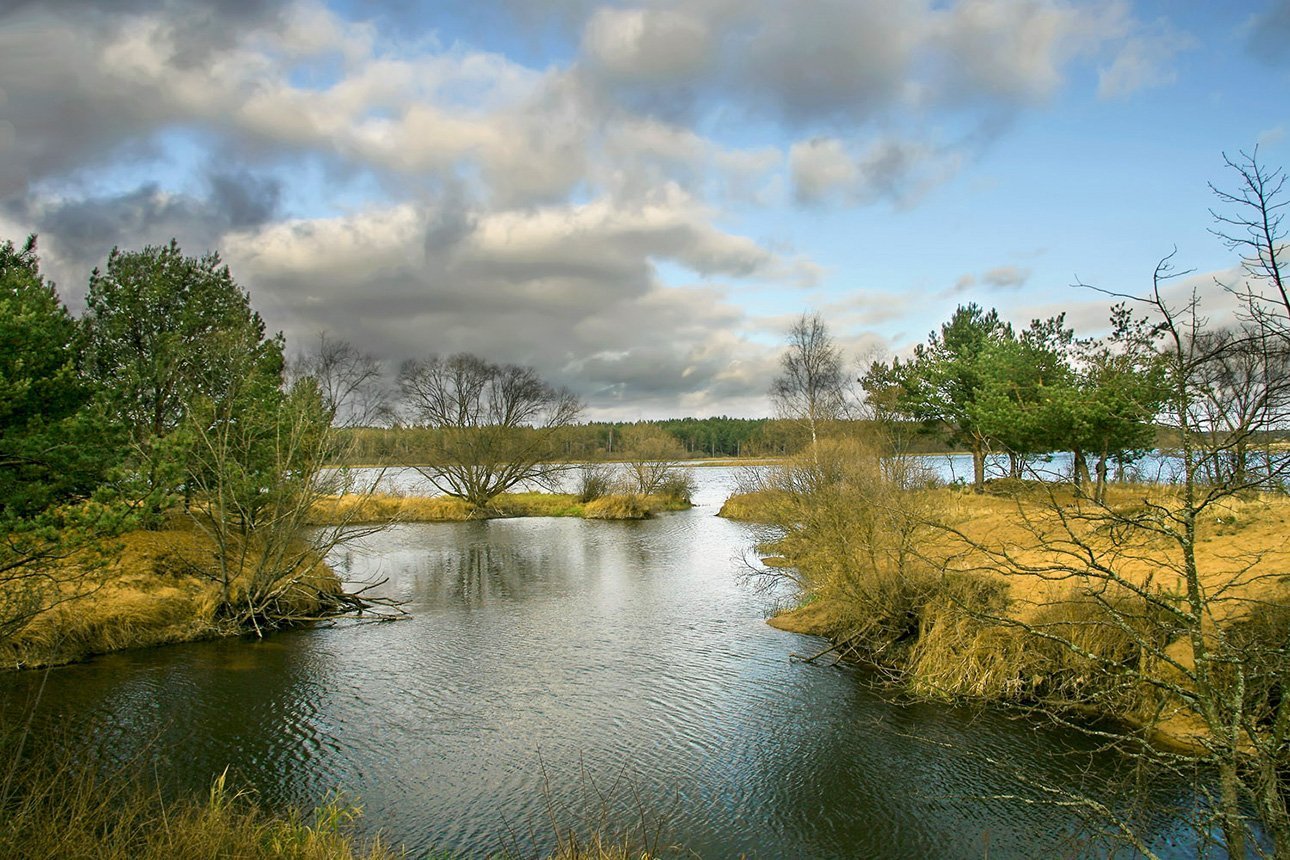 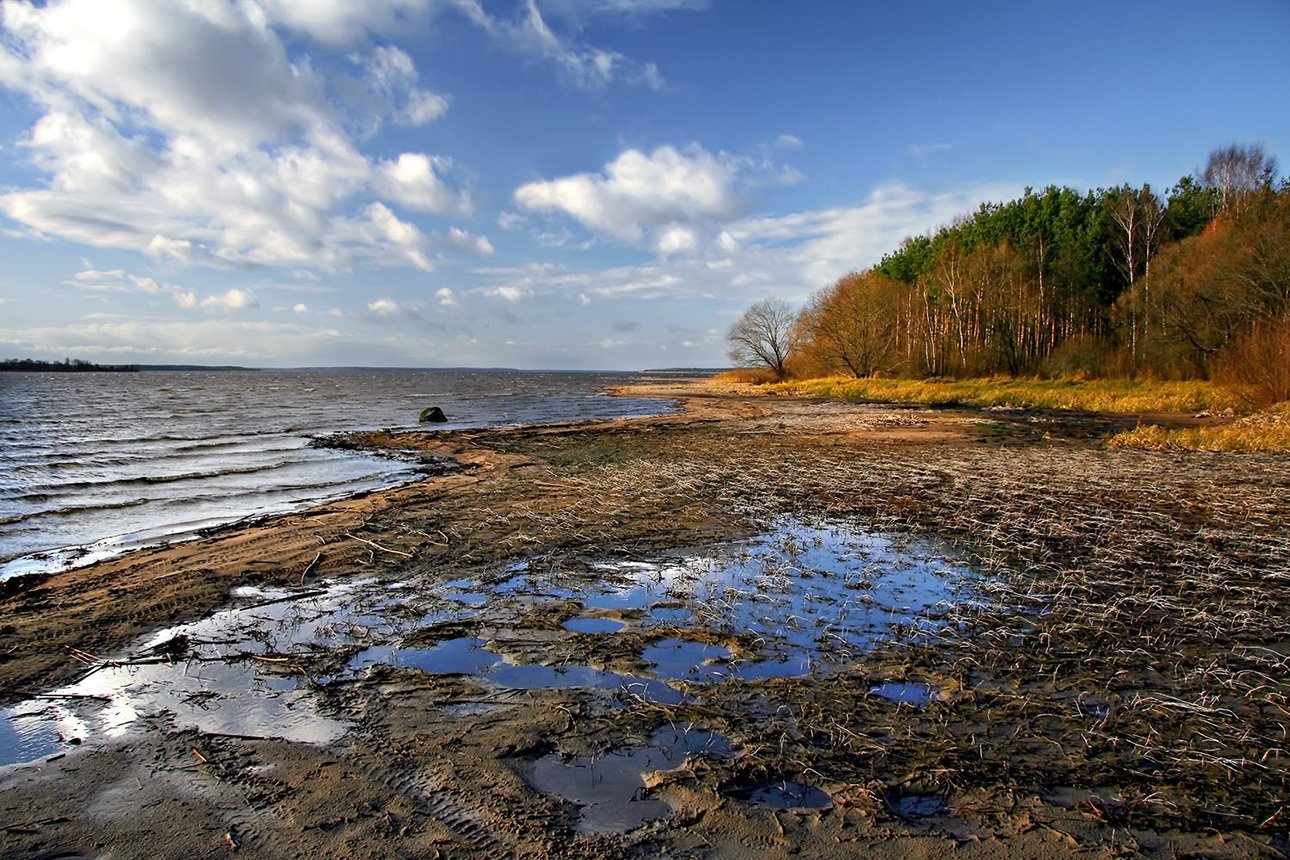 Alas, this year was not pleasing us with the sun as well: only a few evenings in November I was able to see the reflections of the autumn sun. But even such small rays of light give hope for an early spring. And the cardiogram created by the setting sun only increases this hope! 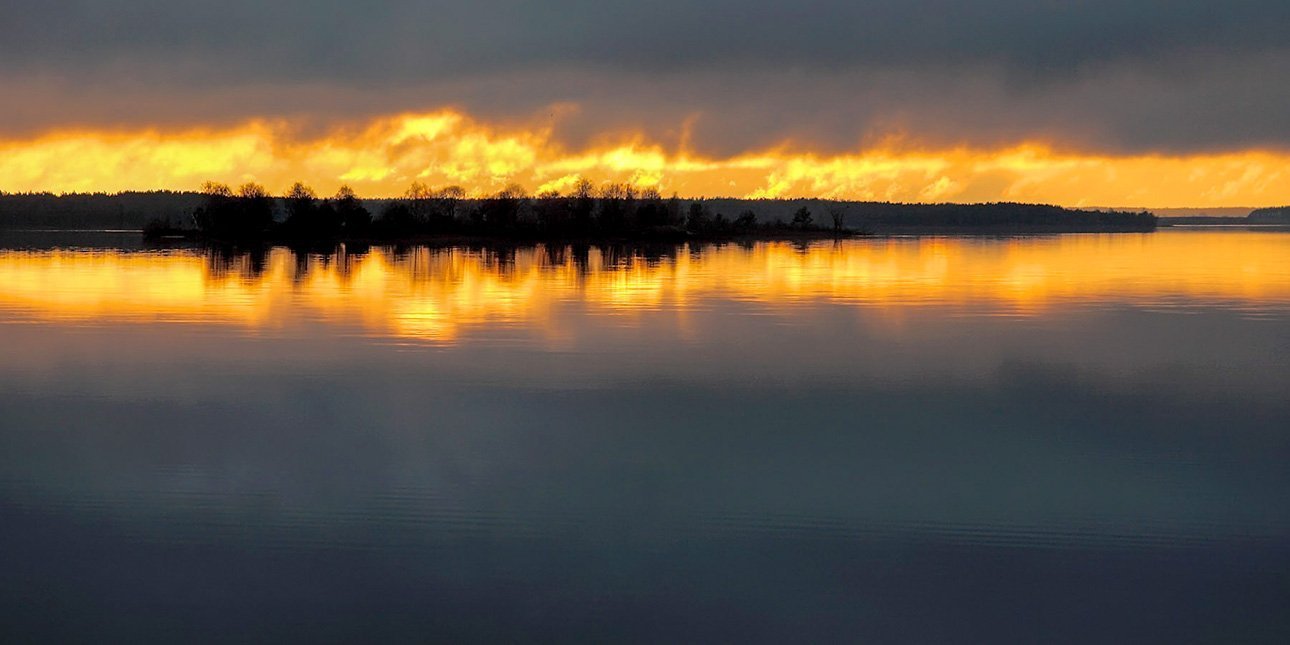 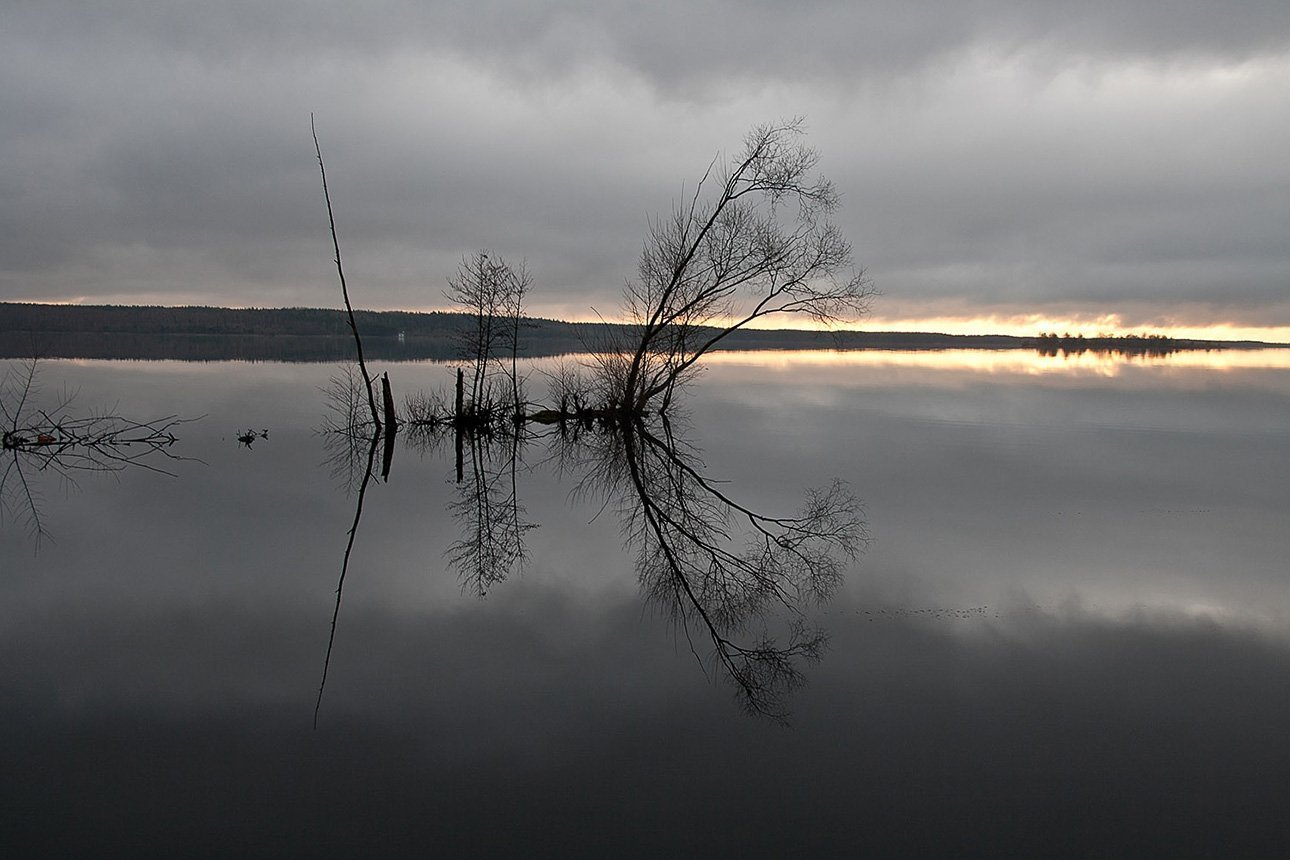 This day unexpectedly made me happy by the beautiful warm weather. The sun shone all day warming a little up the already sufficiently cooled reservoir. And on such days, exposed stumps and driftwood created a fabulous mythical story, which unfortunately can only be observed from ashore in such warm weather…

We approach the snags closer and closer, getting bogged down in the mud deeper and deeper – the excitement tells us not to pay attention to such trifles, and the mind obeys the excitement at such moments. A sudden luck with light and beauty is rare in November, and it is unforgivable not to take advantage of this luck! 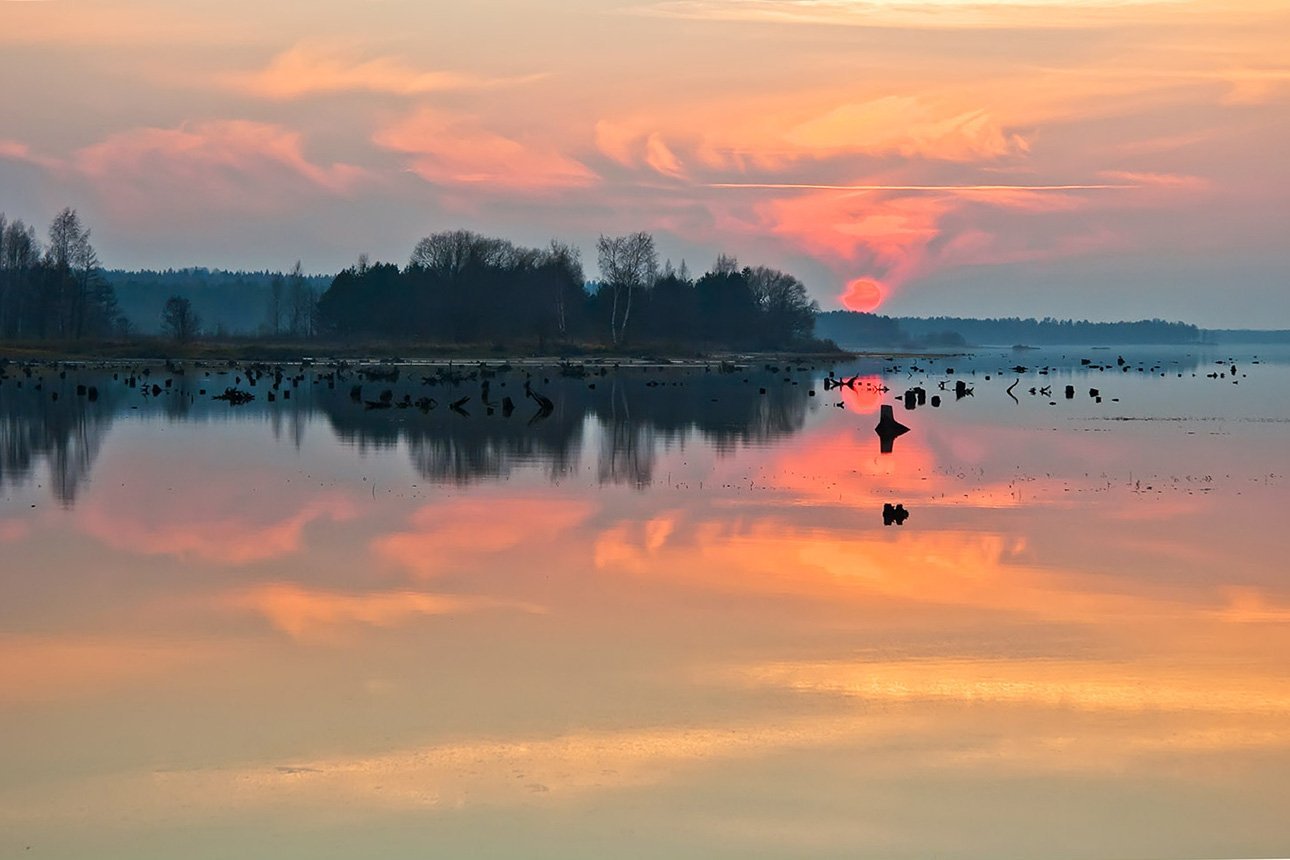 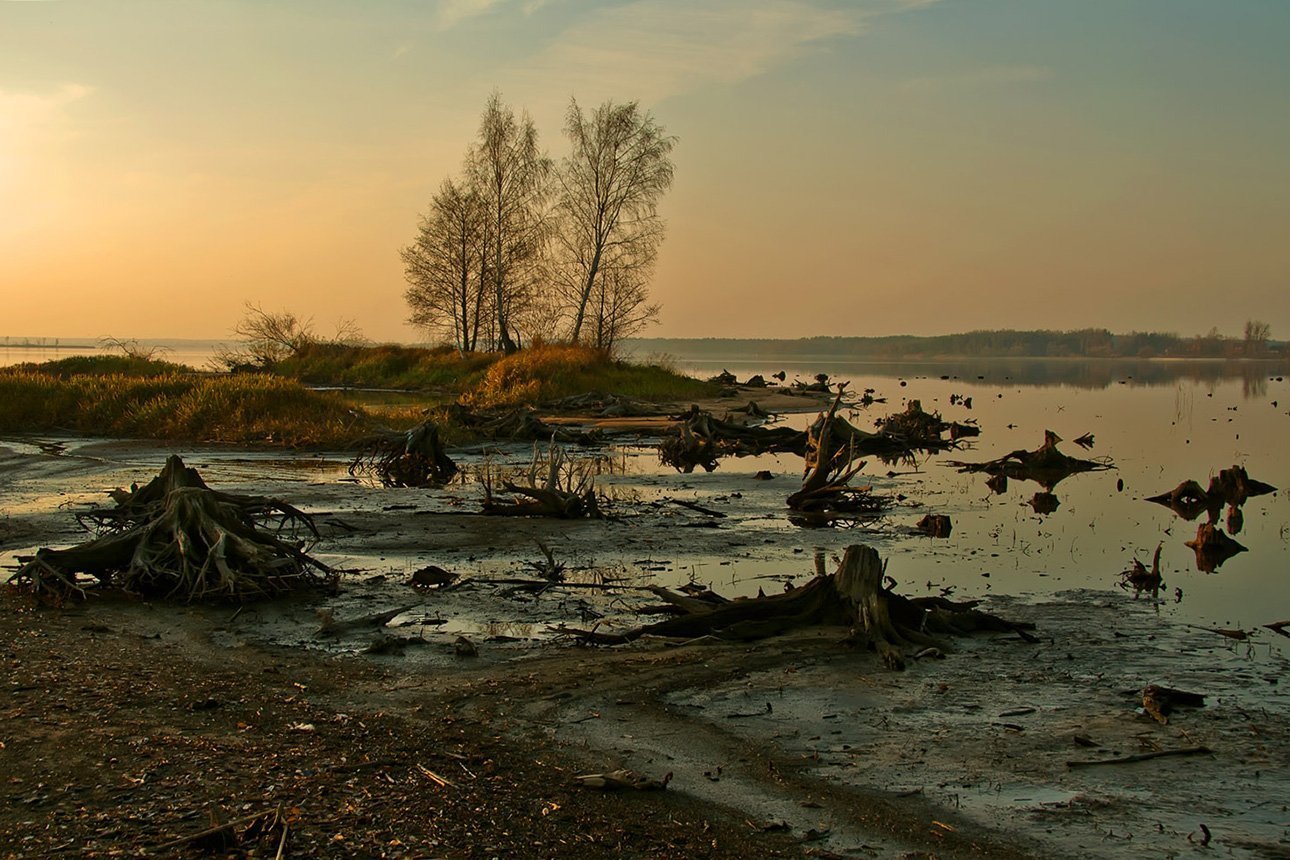 One can hope for a repeat of yesterday's wonderful weather, but not in November! Only in the morning the sun was pleasing us for quite a bit, and then changed his mind for a long time. The wind and drizzling rain did not interfere with the walk. Beautiful shallows, neither observed, nor trodden for the last days and weeks (and maybe even years) by anybody else, cause a sense of admiration – only Nature can create this! 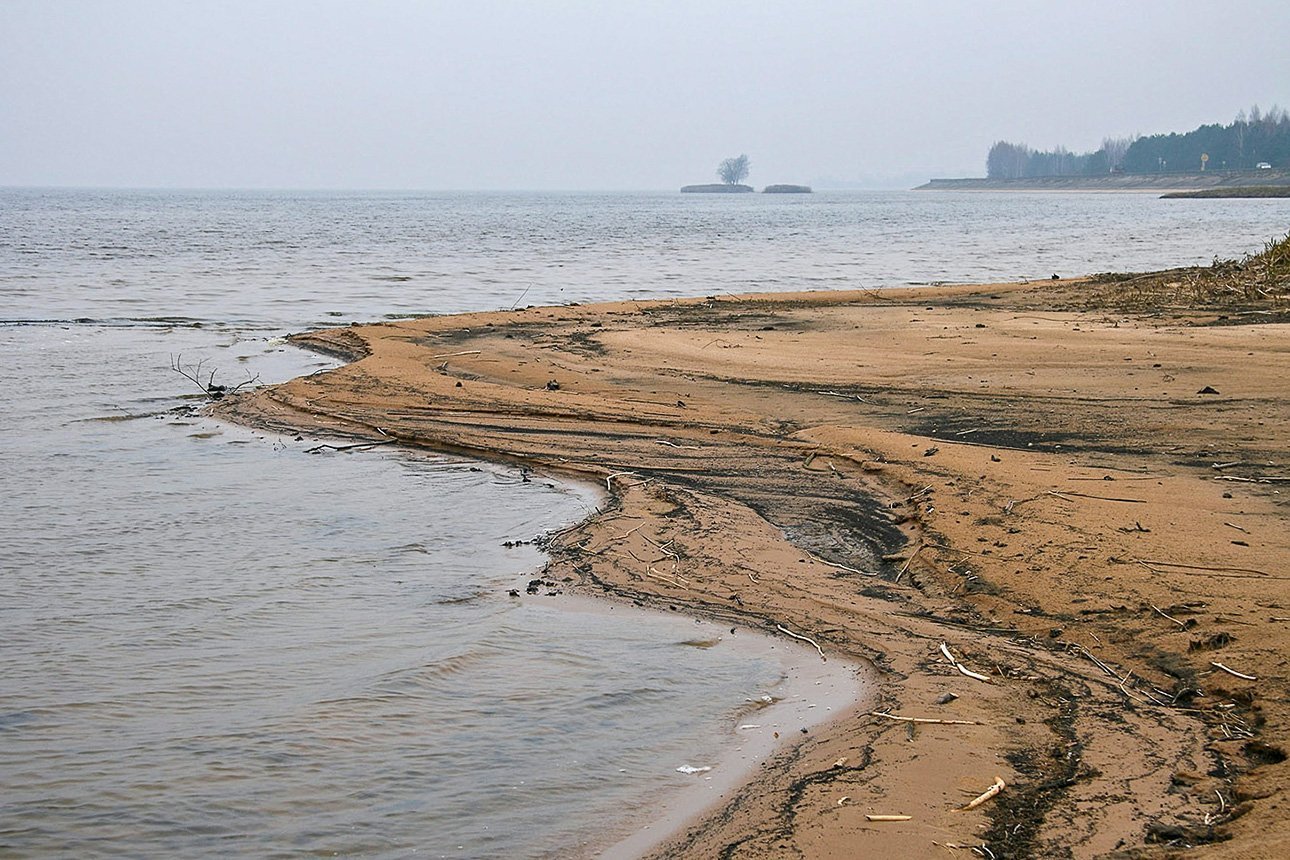 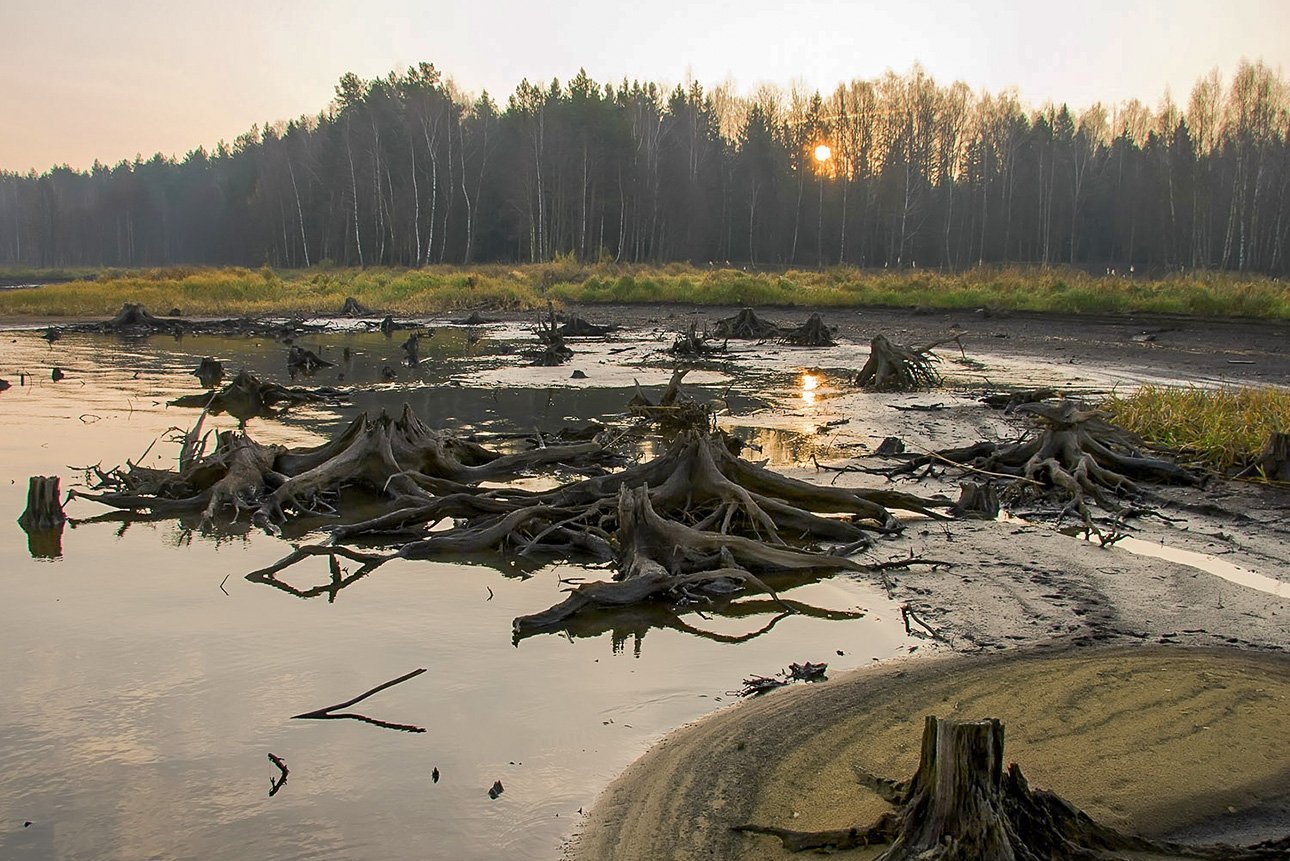 The beginning of November this year was bright, warm and sunny. The shallows that opened up after the descent of the water are picturesque, but not as mystical in the direct light, as when sun is setting. It is not possible to approach them yet because ofthe swamp. 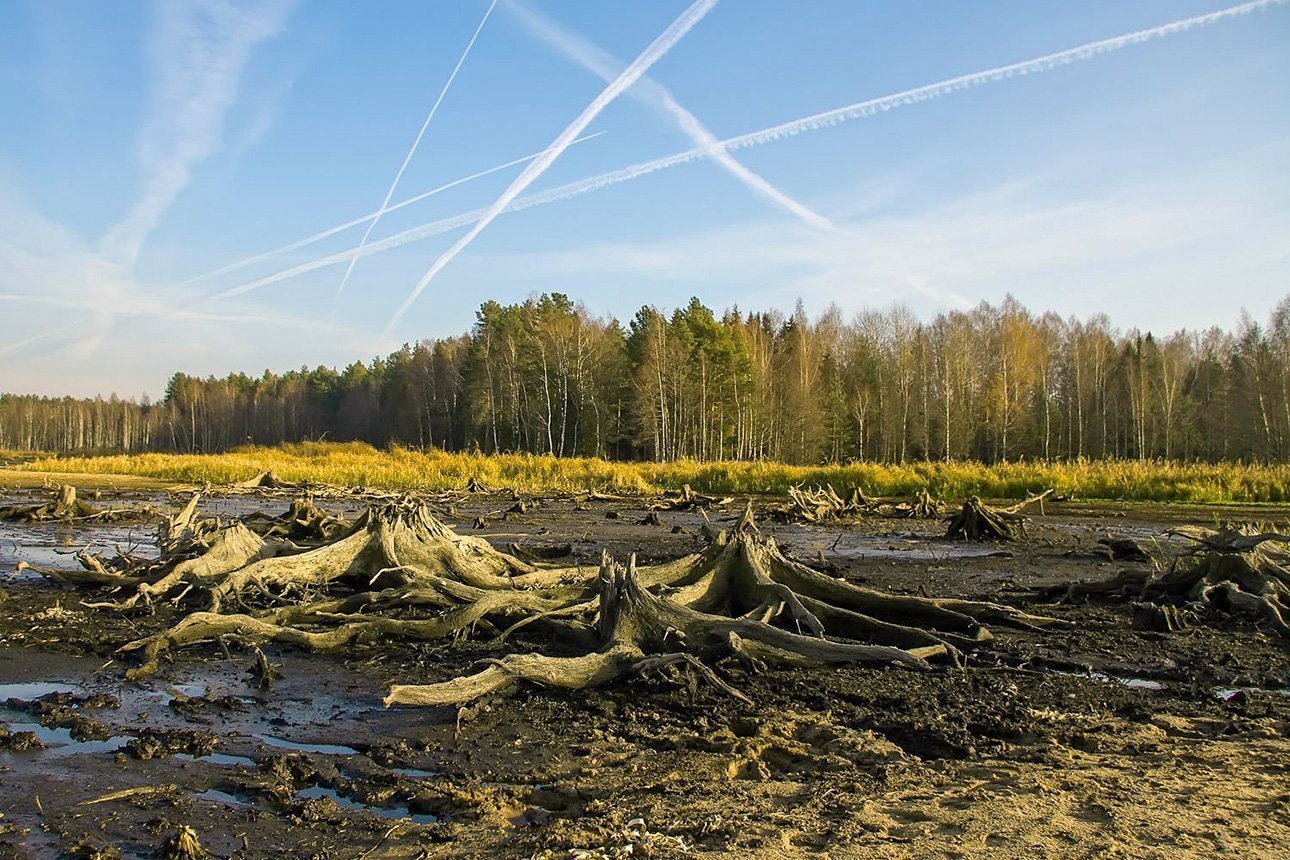 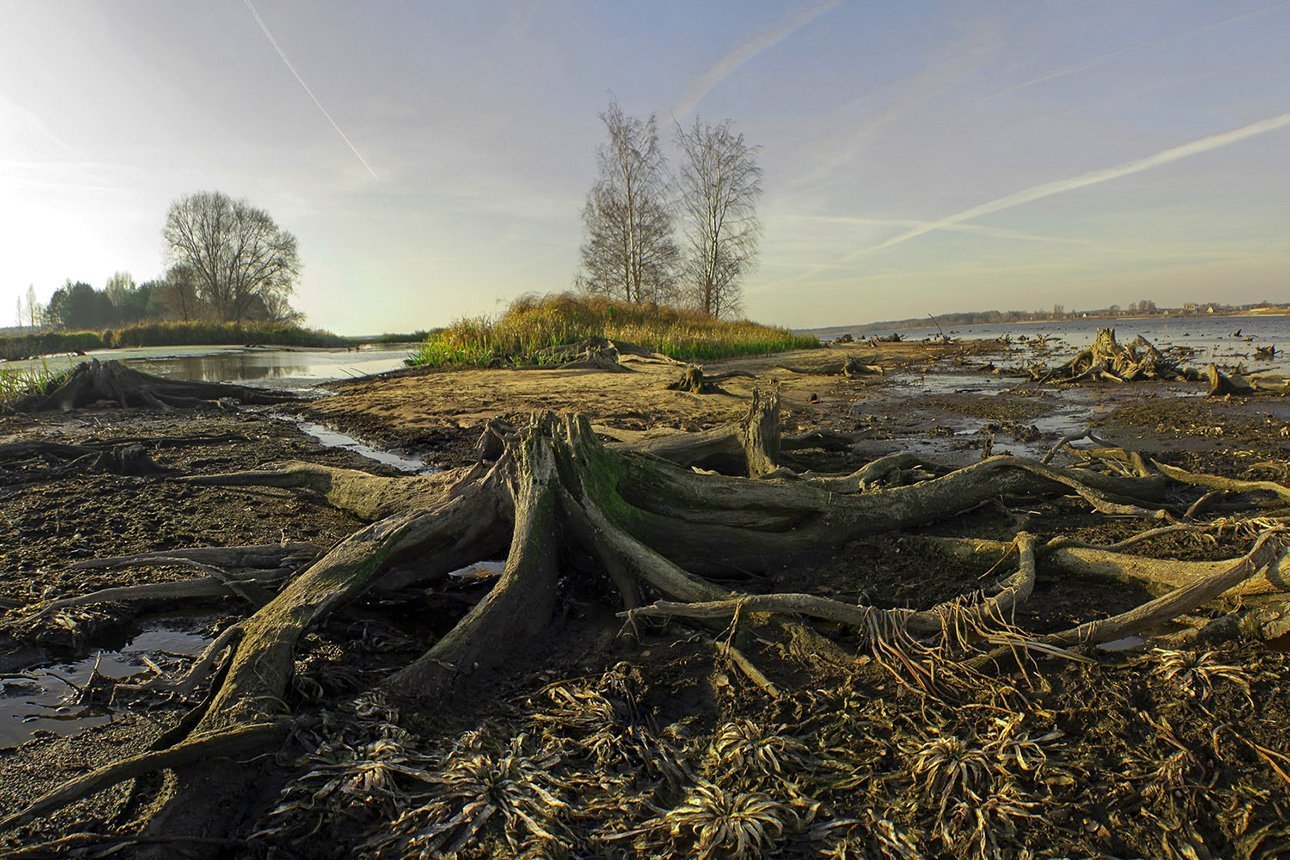 The weather in November can change any day, as we had a chance to see soon. The cold weather came trying to cover all the water with ice quickly. However, it was not an easy thing to do! The cooling water is ready to turn into ice, but a strong wind does not allow it to happen: so the fragile ice flakes are collected by wind near the shore. Only small coves remain indifferent to these changes, because it is not cold enough yet for them to join this performance. 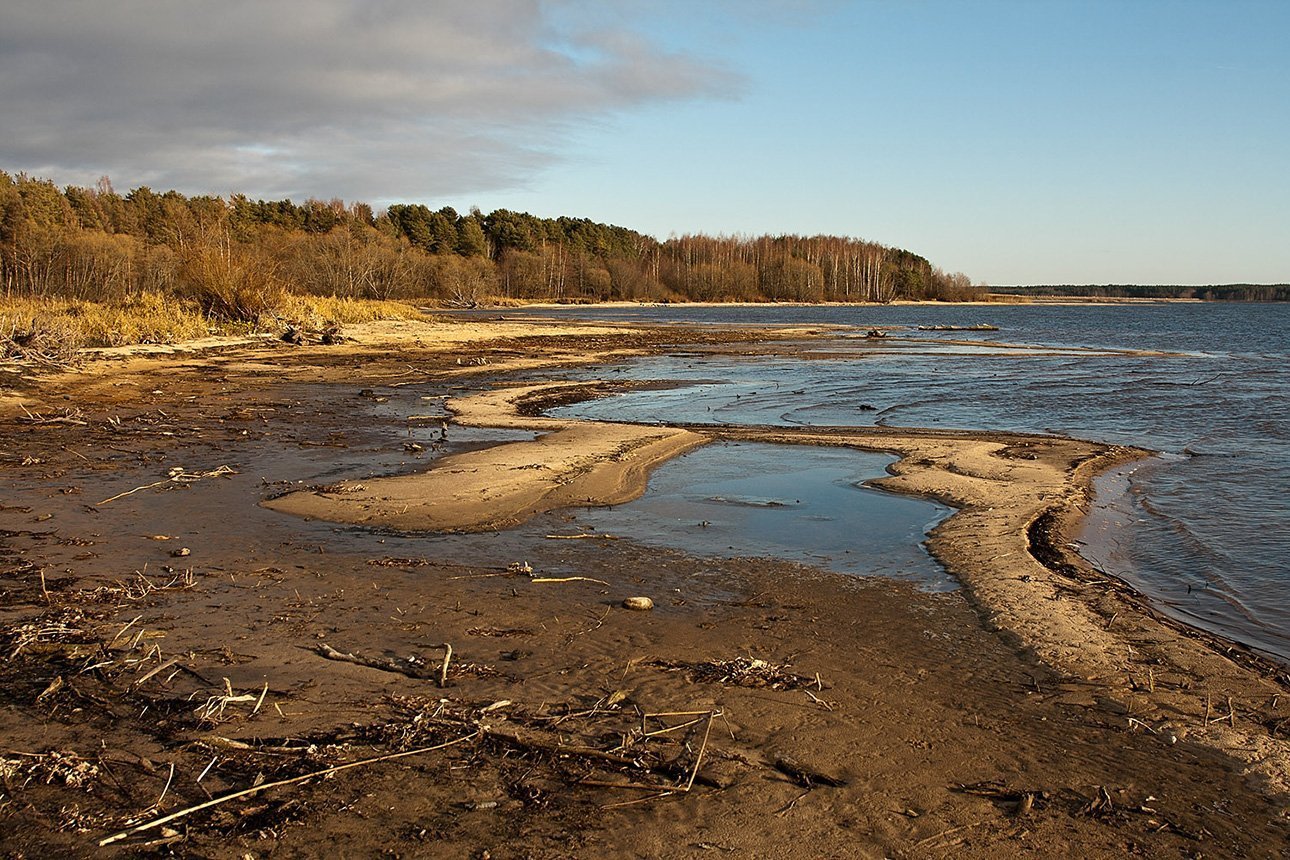 The frost has receded, but there are strong winds that churn the coastal water into foam: a magnificent, picturesque sight, which, however, is not quite comfortable to watch because of the strong wind that penetrates through any clothing. 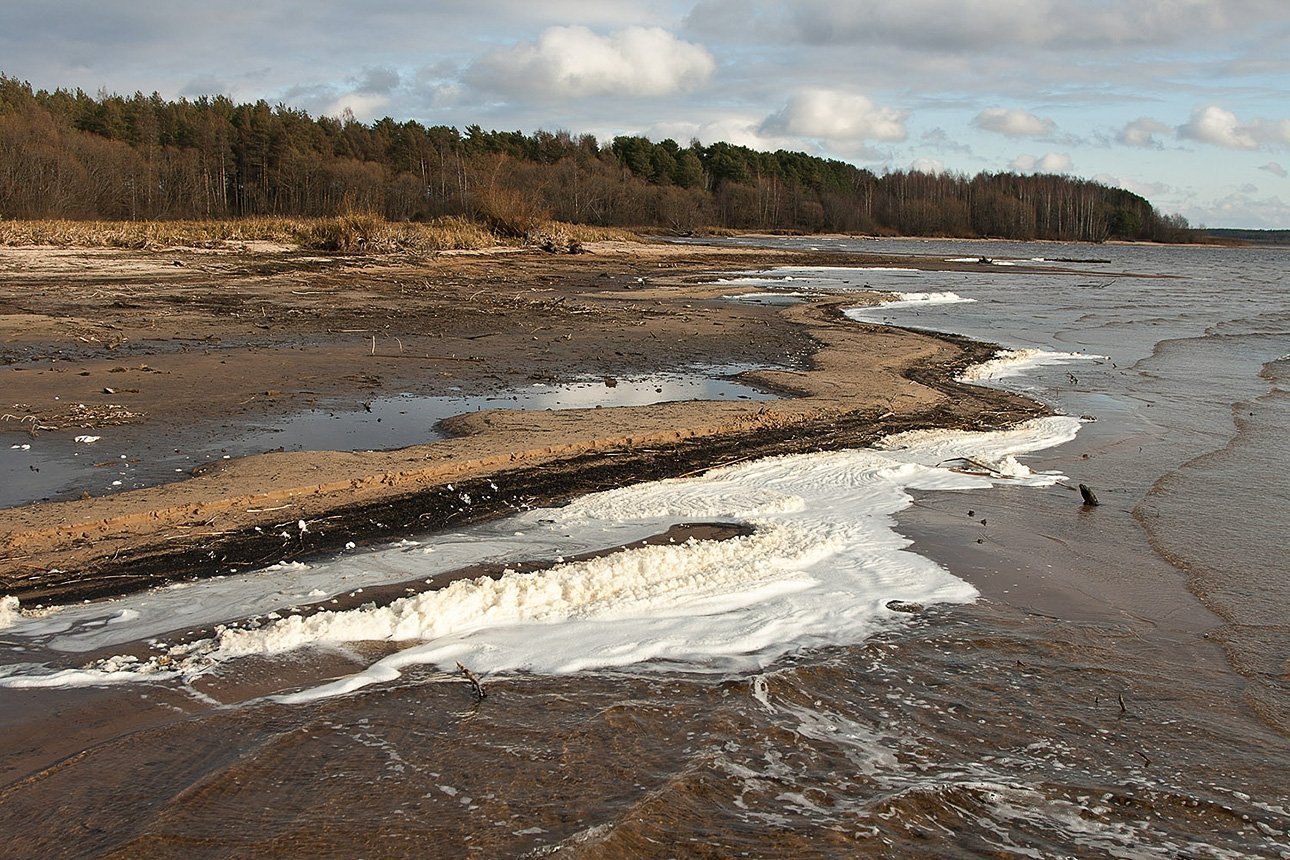 These two photos were taken during the five sunny minutes that were on this day. 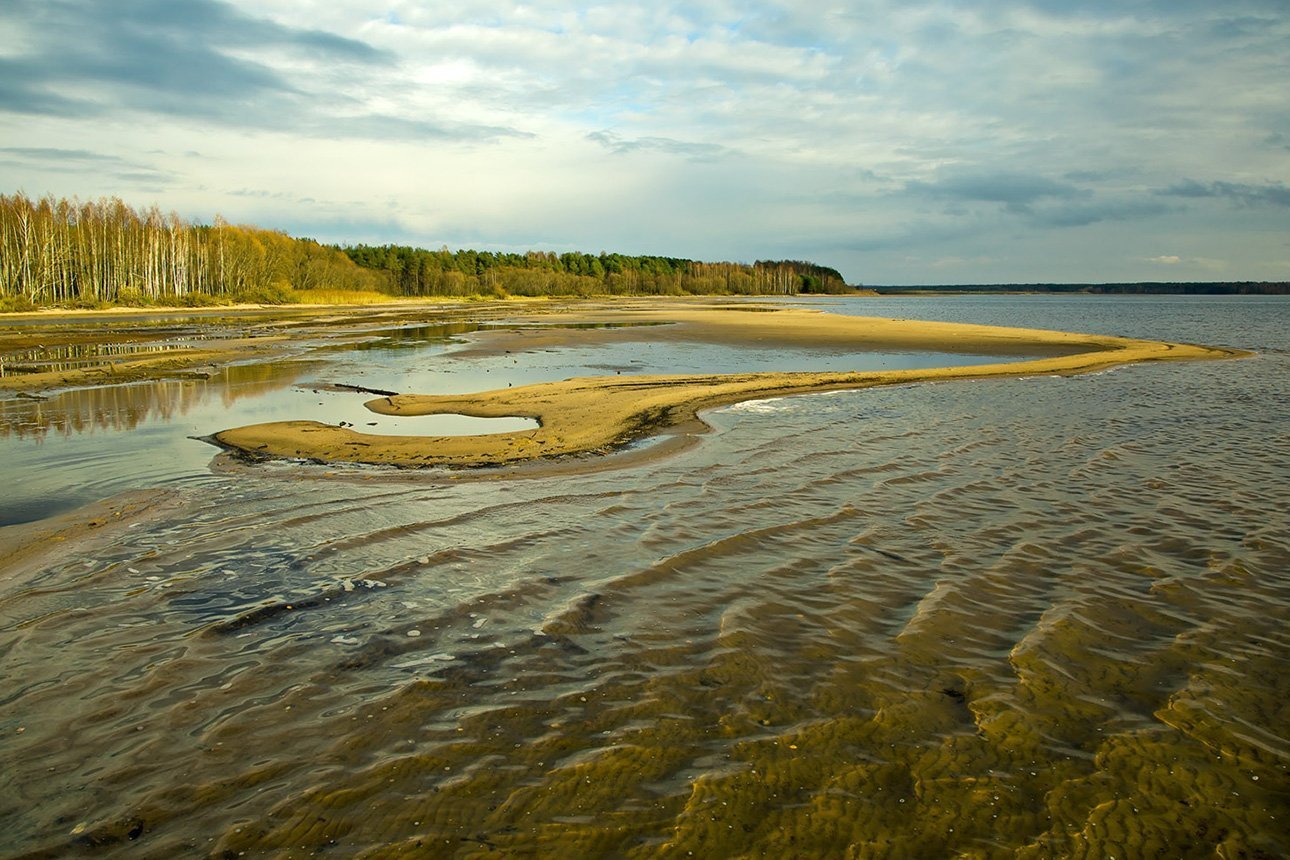 It was a cloudy and ordinary November day, but beautiful precisely because of the snow that had fallen and covered the banks, shallows, and plants. It's nice to walk along the beach on such a day, not thinking about the camera, but just immersing yourself in the natural beauty. 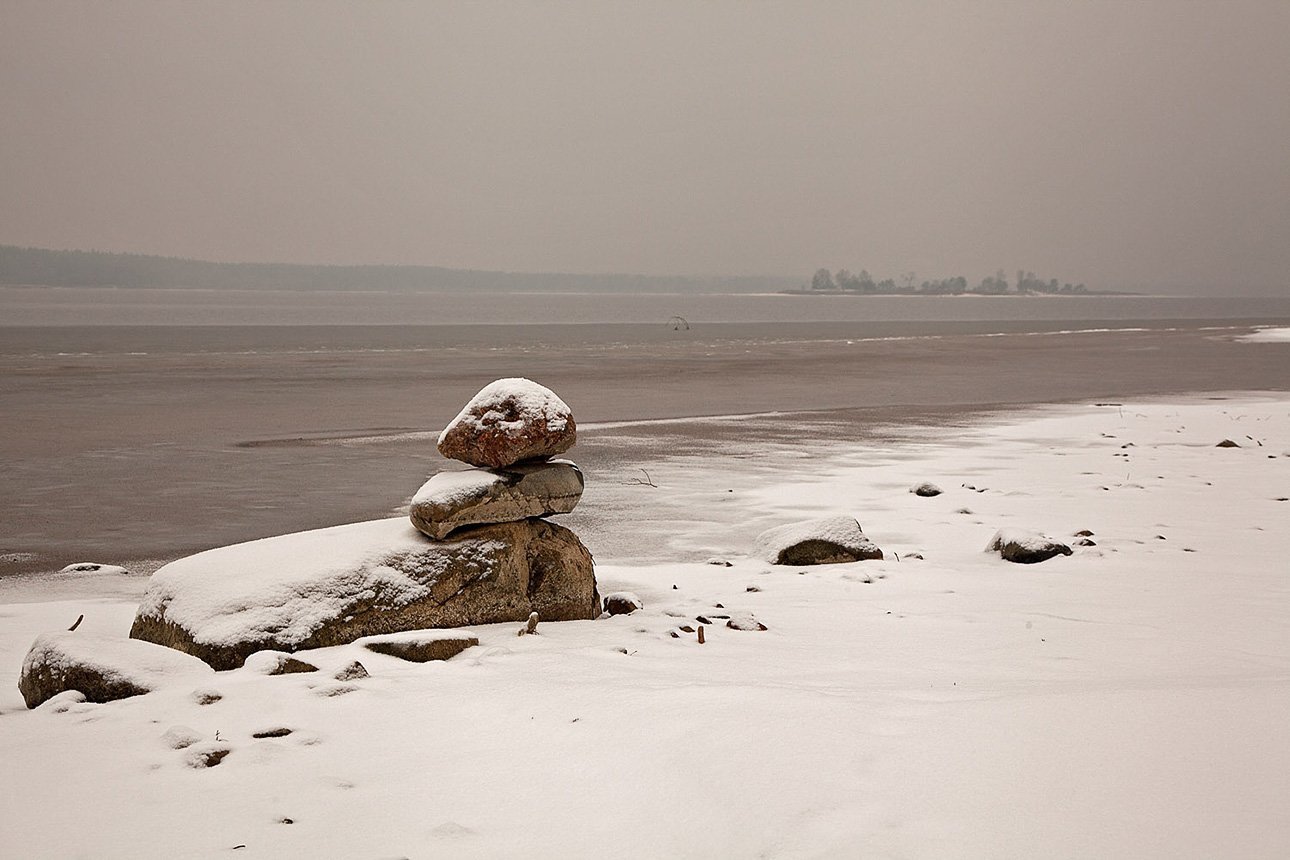 And the next day it was frost and sun! Waiting for the last “magic minutes” of the day, you just have to stay here longer, waiting patiently and hoping that Nature will show you its beauty.

And it is impossible not to walk along my favorite Greznitza River. Once upon a time it used to flow into the Vilia River; now it brings its water to the reservoir without losing its beauty and originality, without caring about its greatness. I have passed it from the mouth to the source in November: it’s the best time for such a walk.

The ice can already hold a person, although one should step on it with caution. This is the most important time for me to visit the valley of stumps, which is not covered with snow yet, but is already accessible. 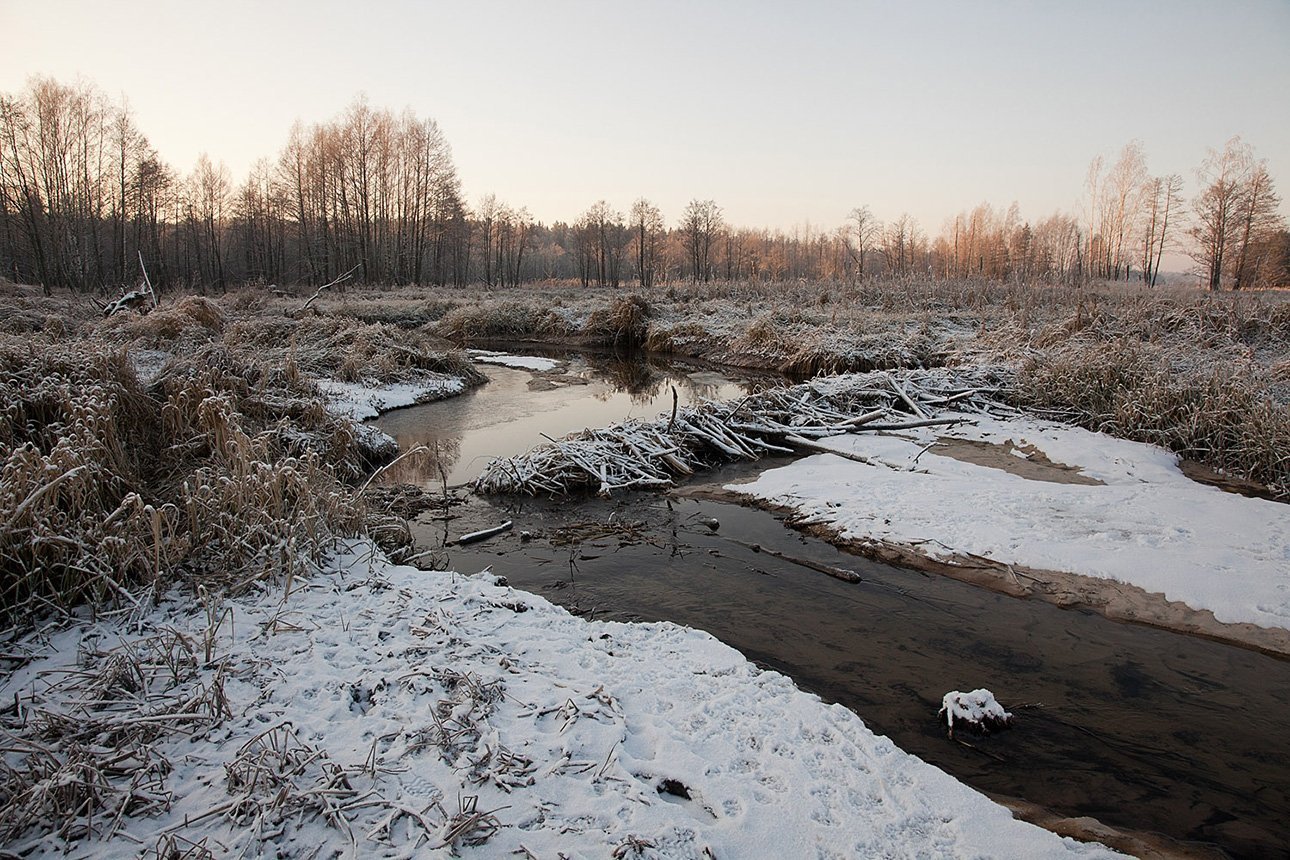 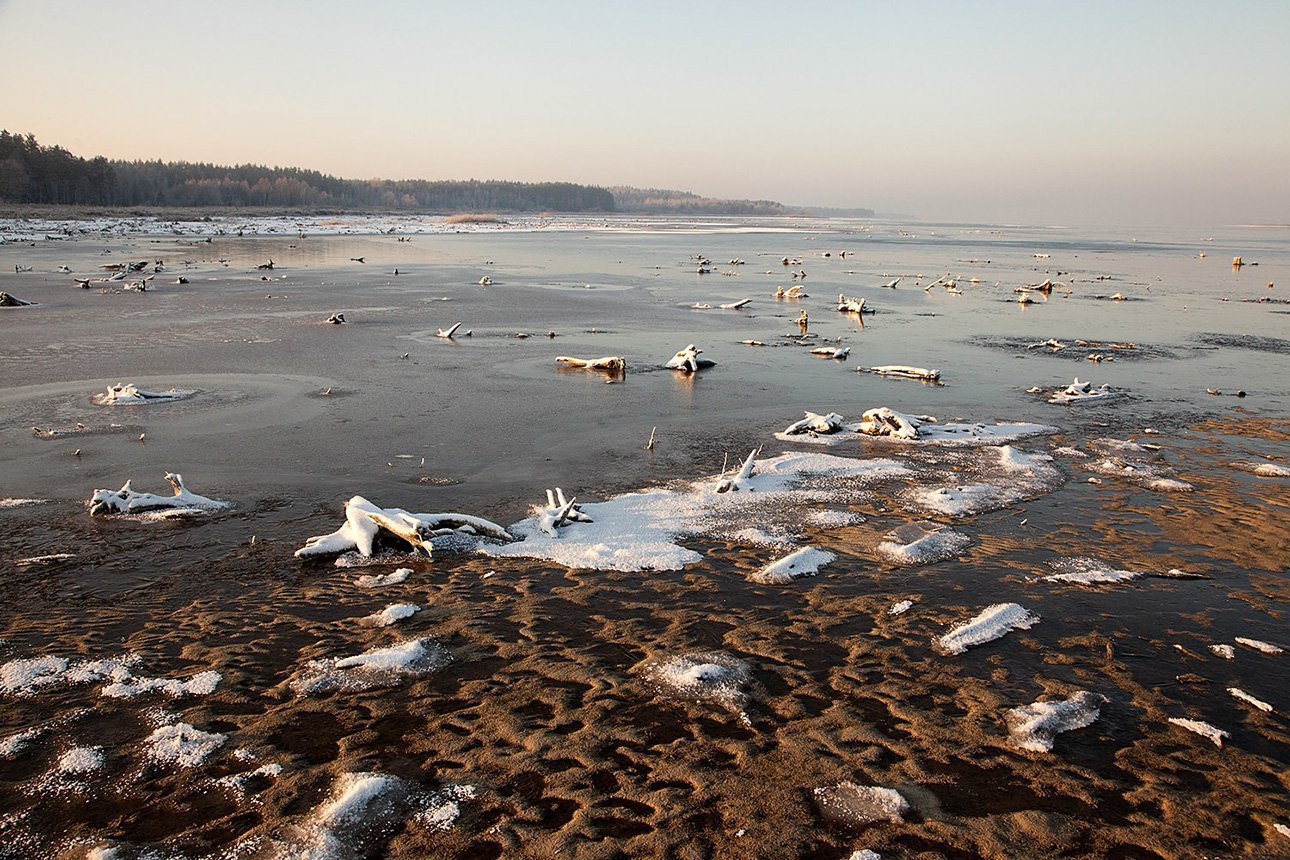 Each of these snags is unique: after all, there was once a forest here, and any of these stumps remembers the time when a mighty tree was standing over its head. Now they appear at the top only in the fall, at the time of low water, and their past life can only be assumed. There are stumps of ancient oaks that may remember Napoleon Bonaparte, as well as stumps of young birches, aspens and alders that did not probably understand what happened to them. I'm very interested in approaching each stump and trying to get a feel for their past life. But one can only approach them at the lucky time of November: the frost had already made an ice road, but the snow hasn’t closed the snags yet. Unfortunately, this walk is not available every year. 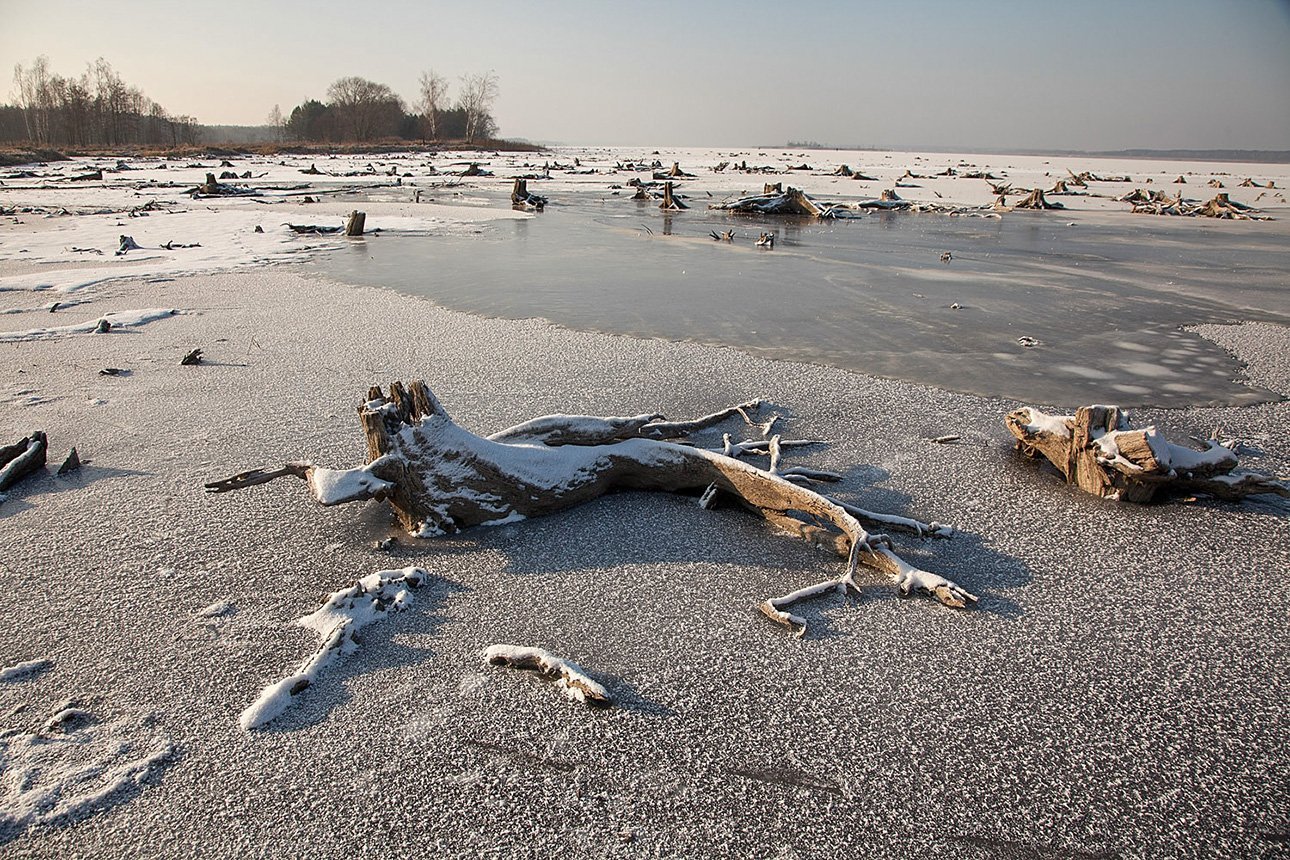 The beginning of the freeze-up always impresses with its thoroughness and scale. To see that is a great success, but if the sun helps to decorate this beauty, then it is doubly good luck. A biting wind drives the waves to the shore, and since the frost has already come, drops of water freeze on all the coastal blades of grass and twigs, gradually turning them into elegant ice sculptures.

The water thickens, and the icy snow flakes on the water surface crawl out to the shore with a rhythmic noise, sighing with each wave of the surf. Little by little, these tiny pieces of ice join together to create floating ice pancakes that are collected by the wind into a single array. A day or two - and the ice near the coast will become quite solid. In frosty weather it increases its area right before the eyes of an astonished observer. 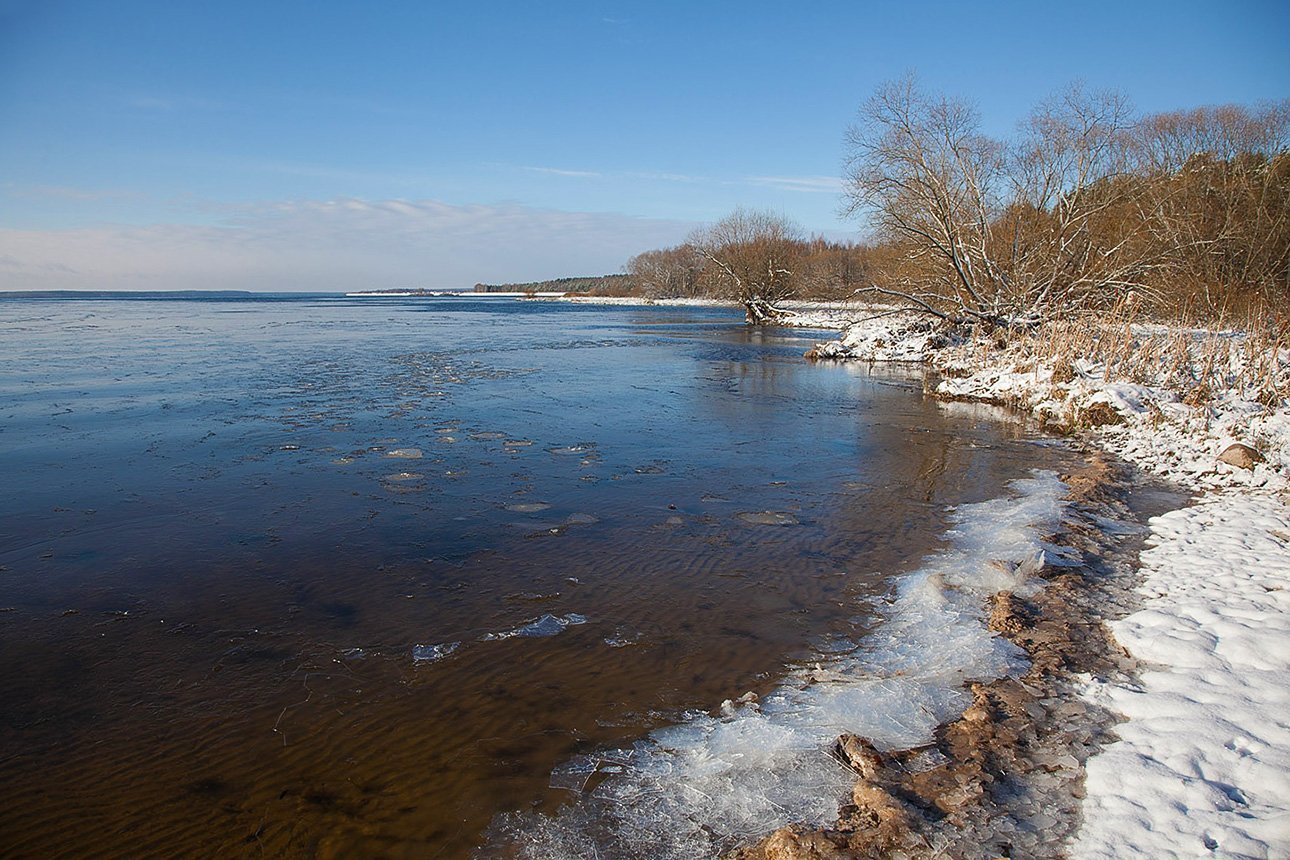 These are my sketches and impressions from visiting the Vileysky Reservoir in November. I sincerely wish all nature lovers to get pleasant impressions and successful photos!

I’ve met the winter “as usually” December 1, 2020. According to the forecasts, it should be shiny in the Lepel and Ushachsky areas. Snow has already covered the ground and trees, but ice is not frozen on the lakes.