Photo “hunting” of moose and deer in Krasny Bor

Publishing house "Riftour "traditionally makes branded calendars for the tourist complex and hunting farm "Krasny Bor" (a part of the wildlife preserve “Paozyorie”). This year we decided to dedicate the project to only one animal species – to the moose. The designer of the publishing house suggested the idea of combining several pictures of moose: in the foreground there should be a large portrait of the animal, and the background should be made by some scene from the seasonal life of this animal, which is typical for a particular month. 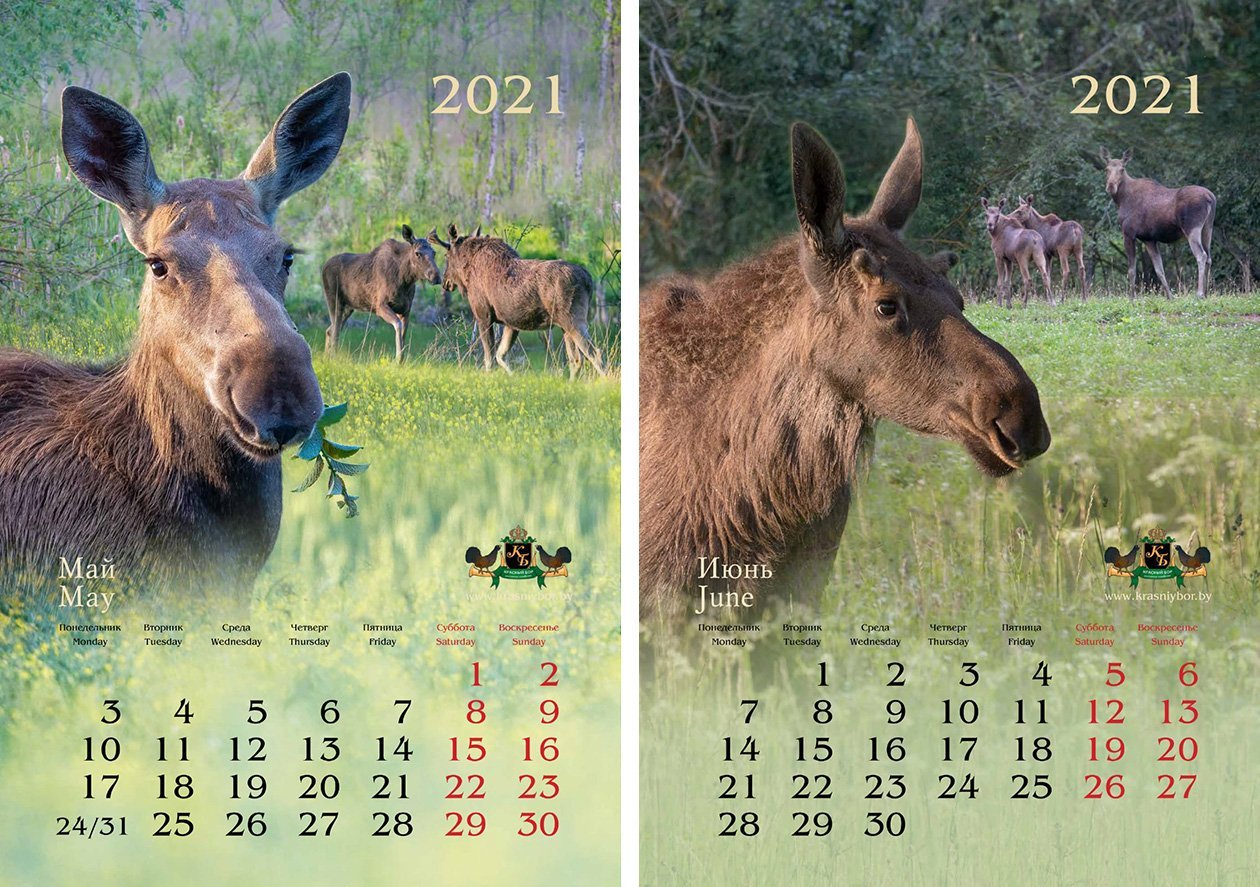 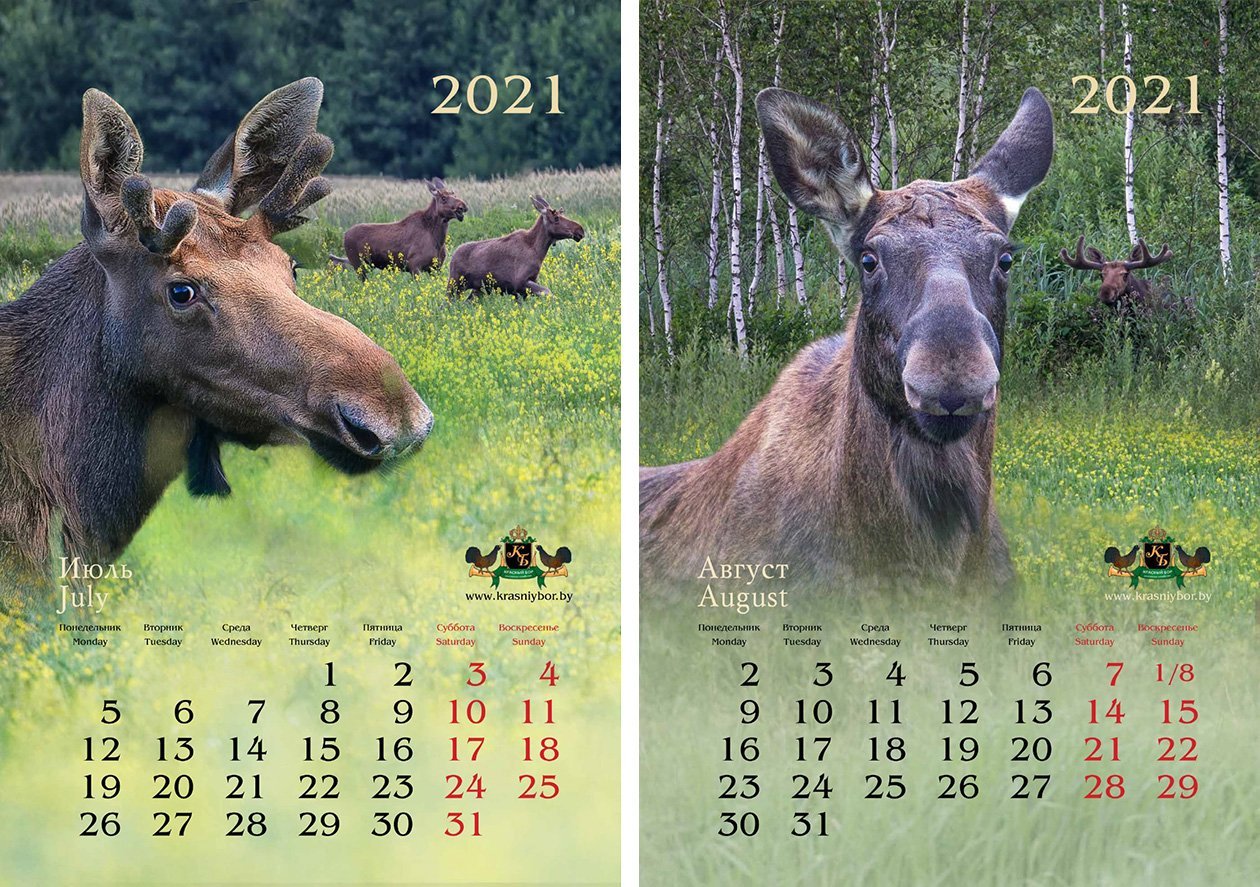 But it turned out that during my entire thirty-year photo-hunting practice, not so many moose have been accumulated in the archive; even more, they had hardly been pictured at different seasons. The problem is that the large format of the calendar required high-quality images to come to the fore, which meant that the portraits of moose had to be taken close-up, so that large size files could be printed.

The most problematic month was September. This is the time of rutting moose. And we needed a representative photo of a moose in September. So, I decided to take a special shot for the calendar. I went to the national Park "Pripyatsky" - in this southern part of Belarus the rut begins earlier. I couldn't find a decent horned bull. Thus, I relocated to the “Braslav lakes”, to a friend of mine. In Braslav district with a large number of open areas, it is easier to shoot moose, and my friend Oleg is the greatest master at luring them. But the trip was also unsuccessful. So, only our favorite Krasny Bor remained. Which is also a place where the cool specialists can help you taking pictures of a moose.

Director of Krasny Bor advised us two huntsmen as assistants. Later we discussed possible locations and shooting options with one of them, his name was Igor.

During the rut moose can be photographed either early in the morning, or in the evening. Morning shooting is preferable: if you find a moose when it’s still dark, you can sneak up on it, or lure it, while the light is getting brighter all the time, and the chances to make good shots increase. In the evening it gets dark quickly; even if you find a moose, you can simply not have enough time to lure it out until the lighting is more or less decent. Thus, it is preferable to take a position somewhere and to stay waiting for the animals to come out. Of course, only very good hunters know where moose are concentrated during the rut.

On the advice of Igor, I drove up to a forest field, left the car and my wife Natalia about three hundred meters away, and went to the agreed point with all the necessary photographic equipment. There on the edge of the field huge bales of hay prepared for feeding of wild animals are stored. You can climb the hay and have get an excellent view of the whole clearing.

It was still two hours before dark, but a herd of deer was already grazing in the field. The animals immediately reacted to my appearance and disappeared into the forest. I took up a position on the bales with hay and waited.

About forty minutes later, a deer and a one-year-old fawn appeared. 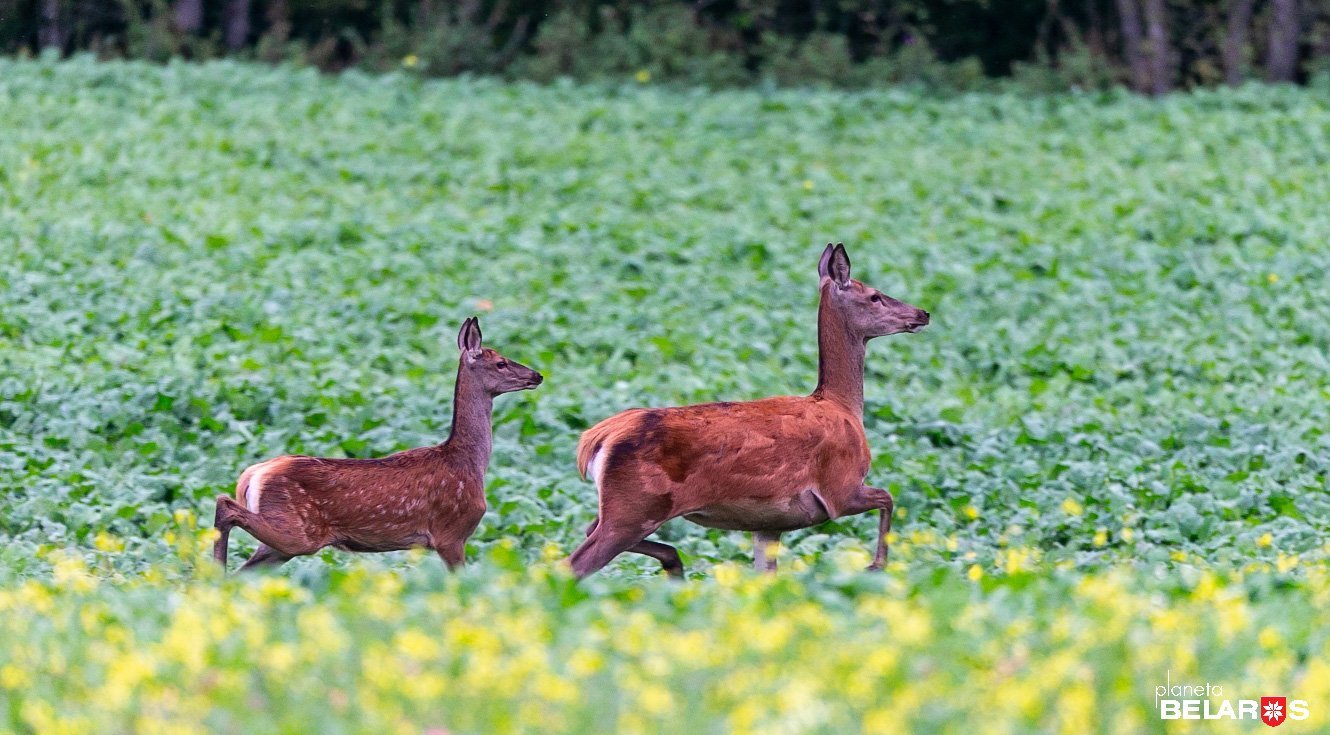 But they didn't stay on the field for long, because the wind wasn't very good: the animals felt my smell and ran away.

But on the other side of the field, a familiar stag and his herd peeked out of the bush. 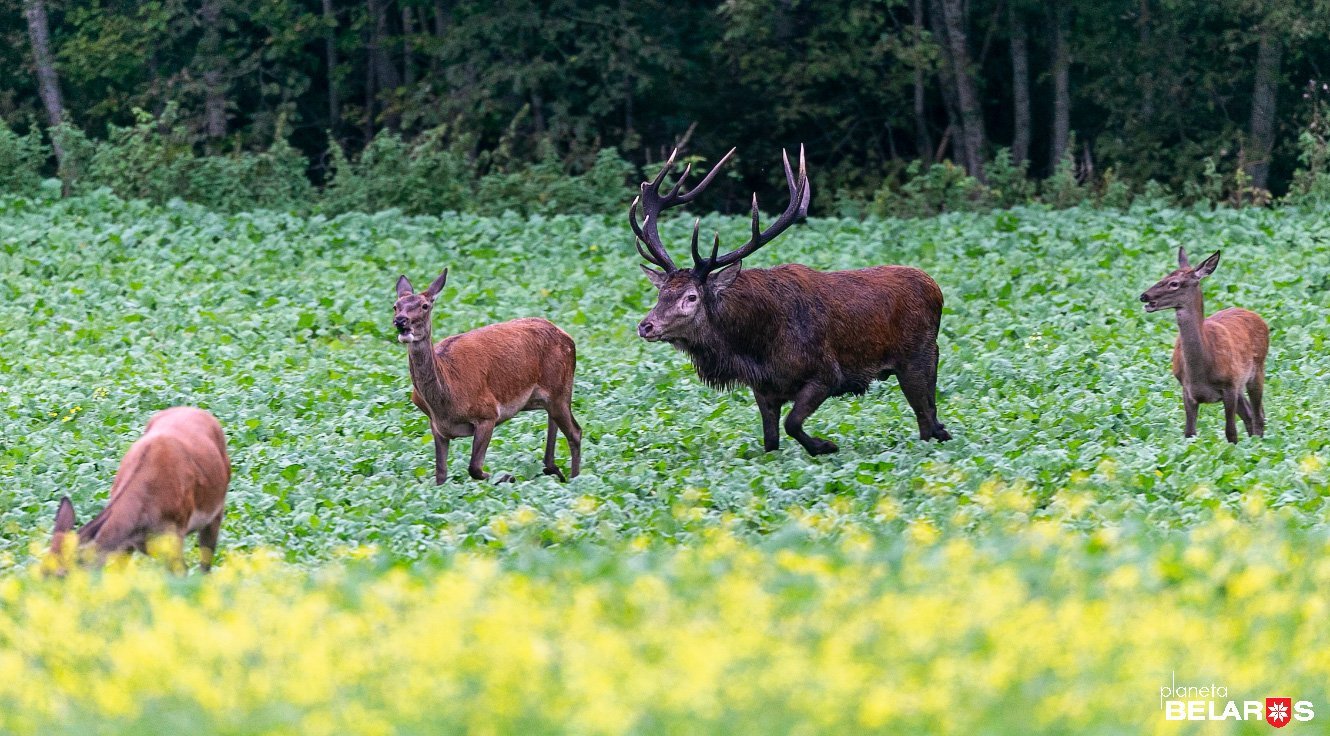 The stag took an interest in the ladies. 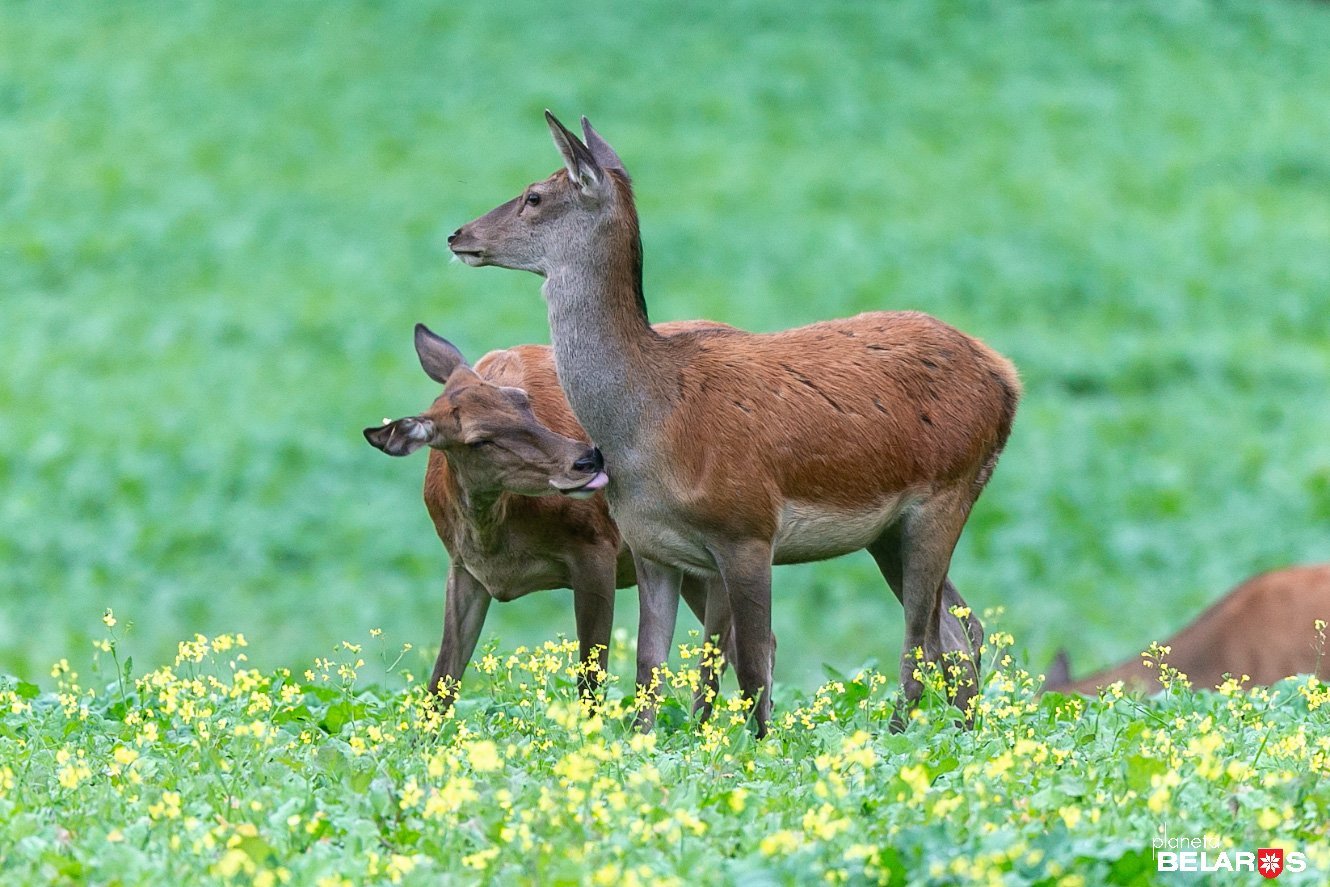 They didn't respond since they were engaged in women's activities. 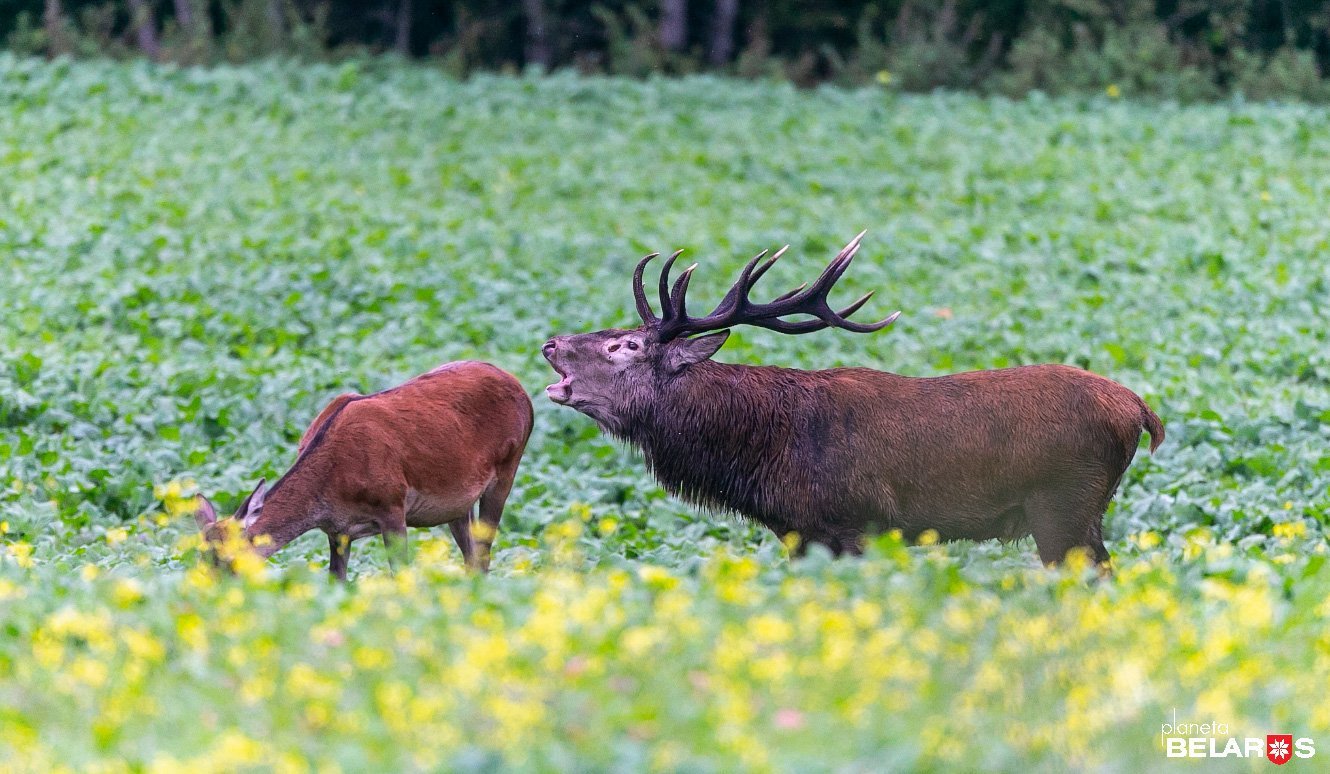 The male roared, telling everyone around that he was the only king and hero in this herd. 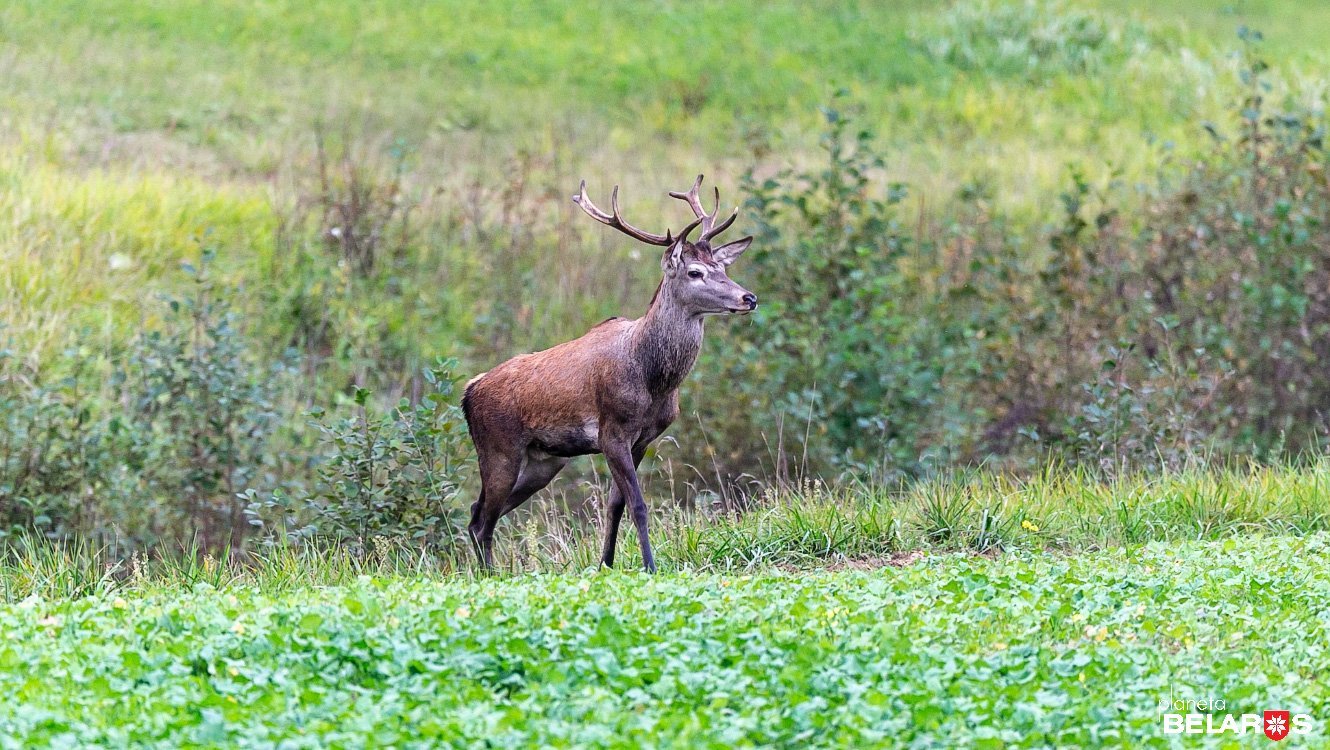 A young deer appeared at the edge of the rapeseed field. Alas, he is still too weak to fight for the harem, so this year this good fellow will not get anything. 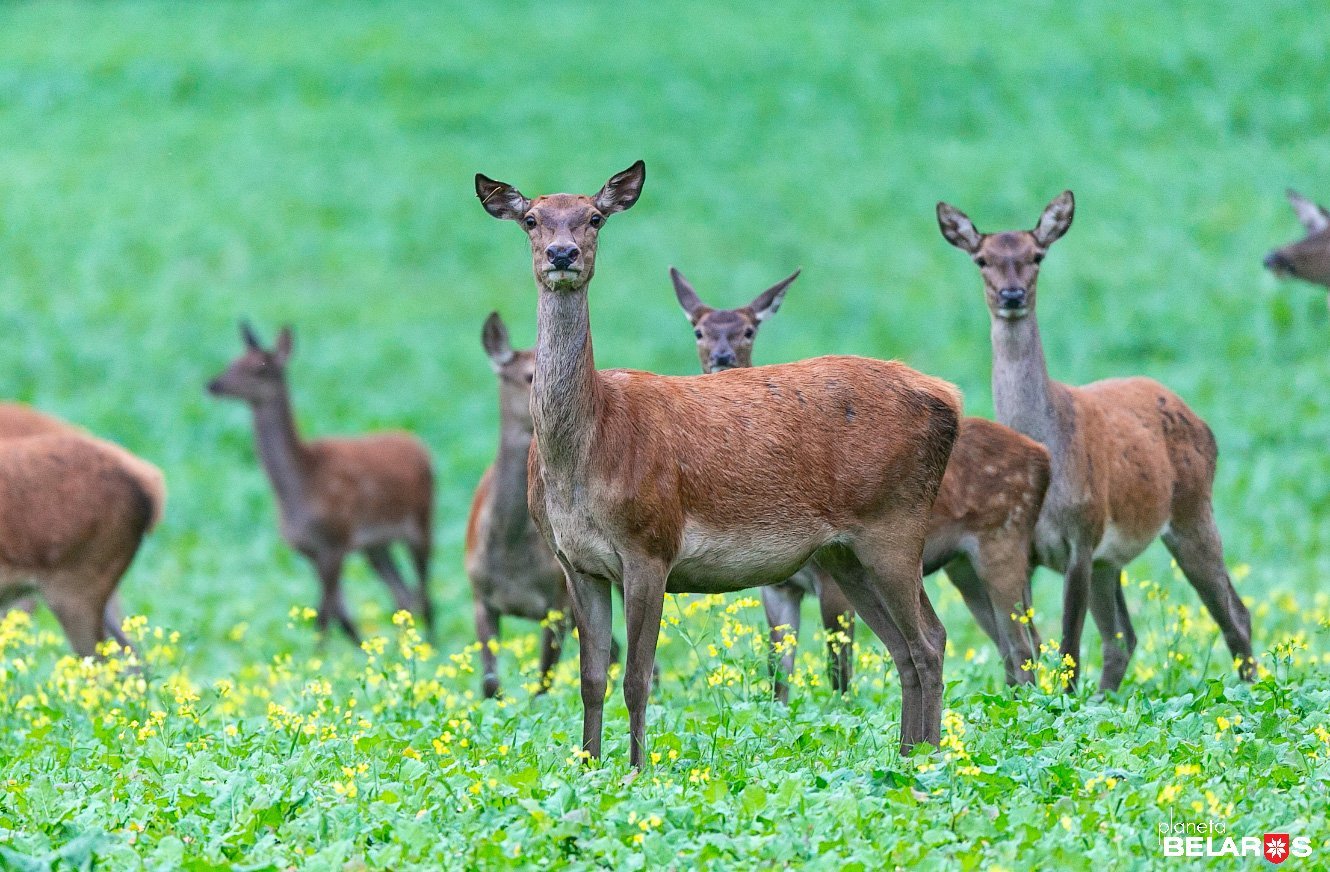 The female deer look in my direction – the wind is changeable; they may have smelled me. But the smell is not strong enough to cause panic.

The deer continues to roar and lazily chase its females. 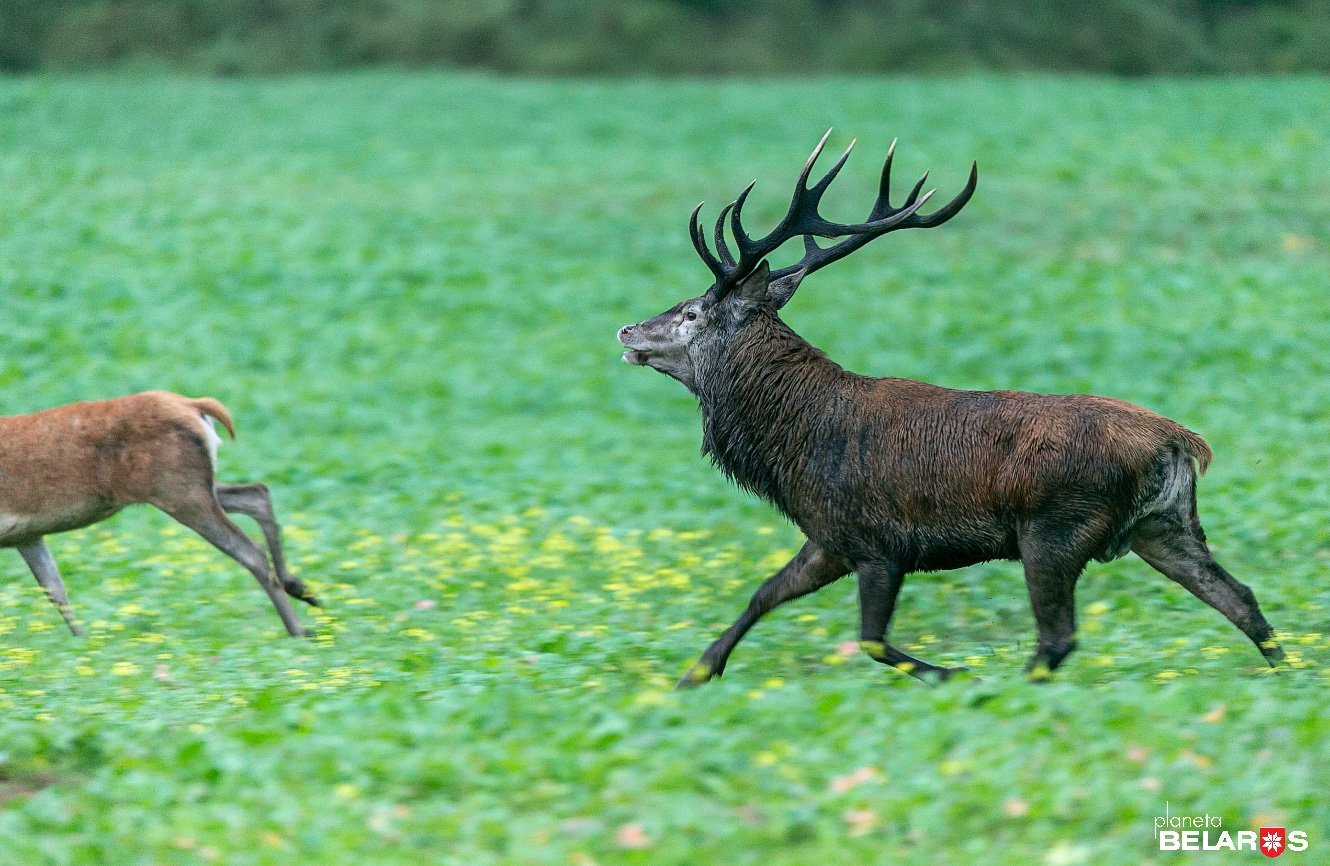 But it demonstrates a completely different speed when a potential competitor approaches the herd. 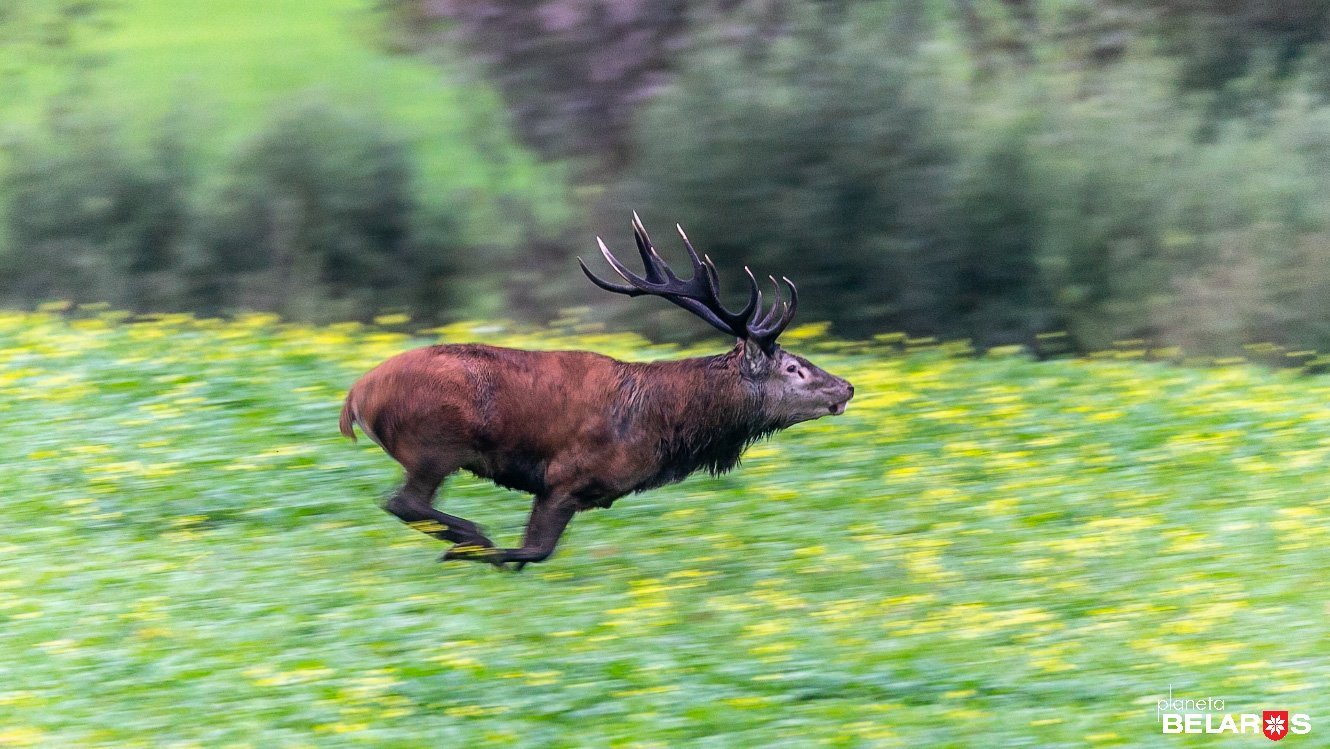 Unfortunately, I can't capture two males in one shot – the young deer runs away from the herd very quickly. 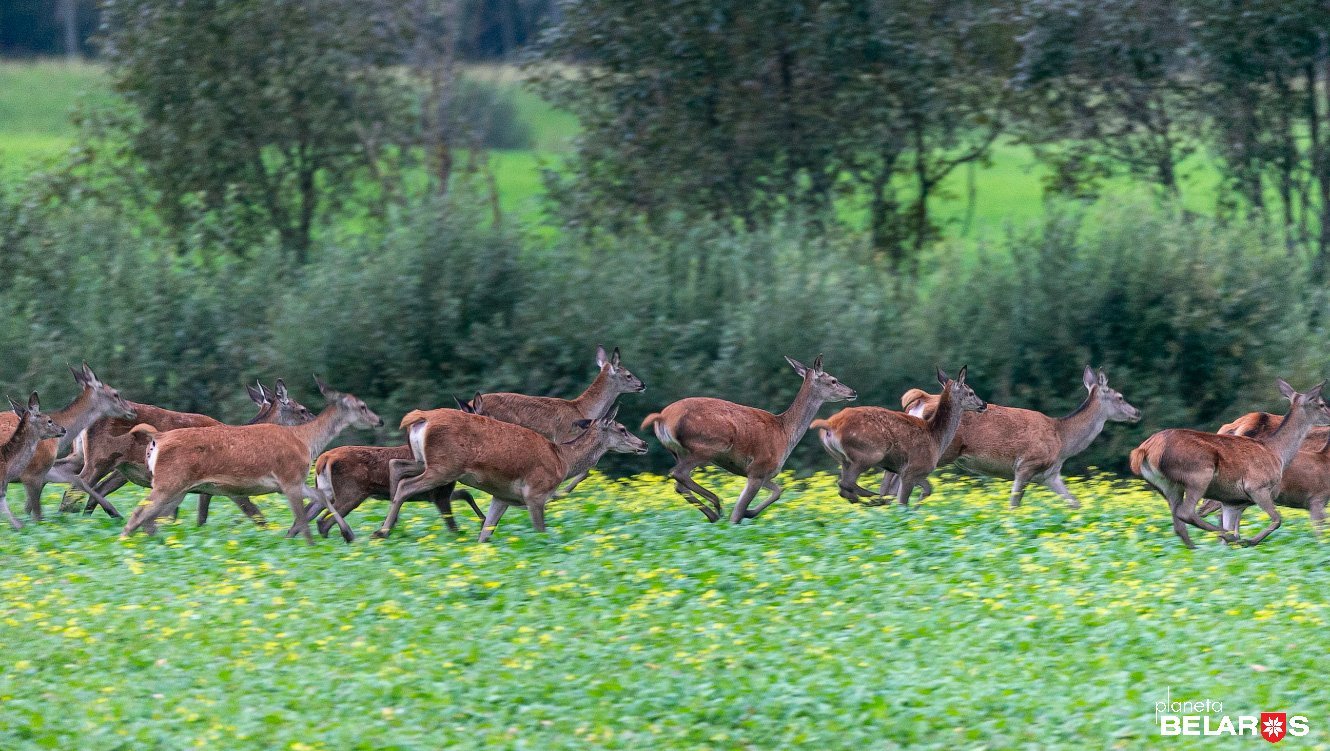 Soon the whole herd left the field, but the moose did not appear on it. 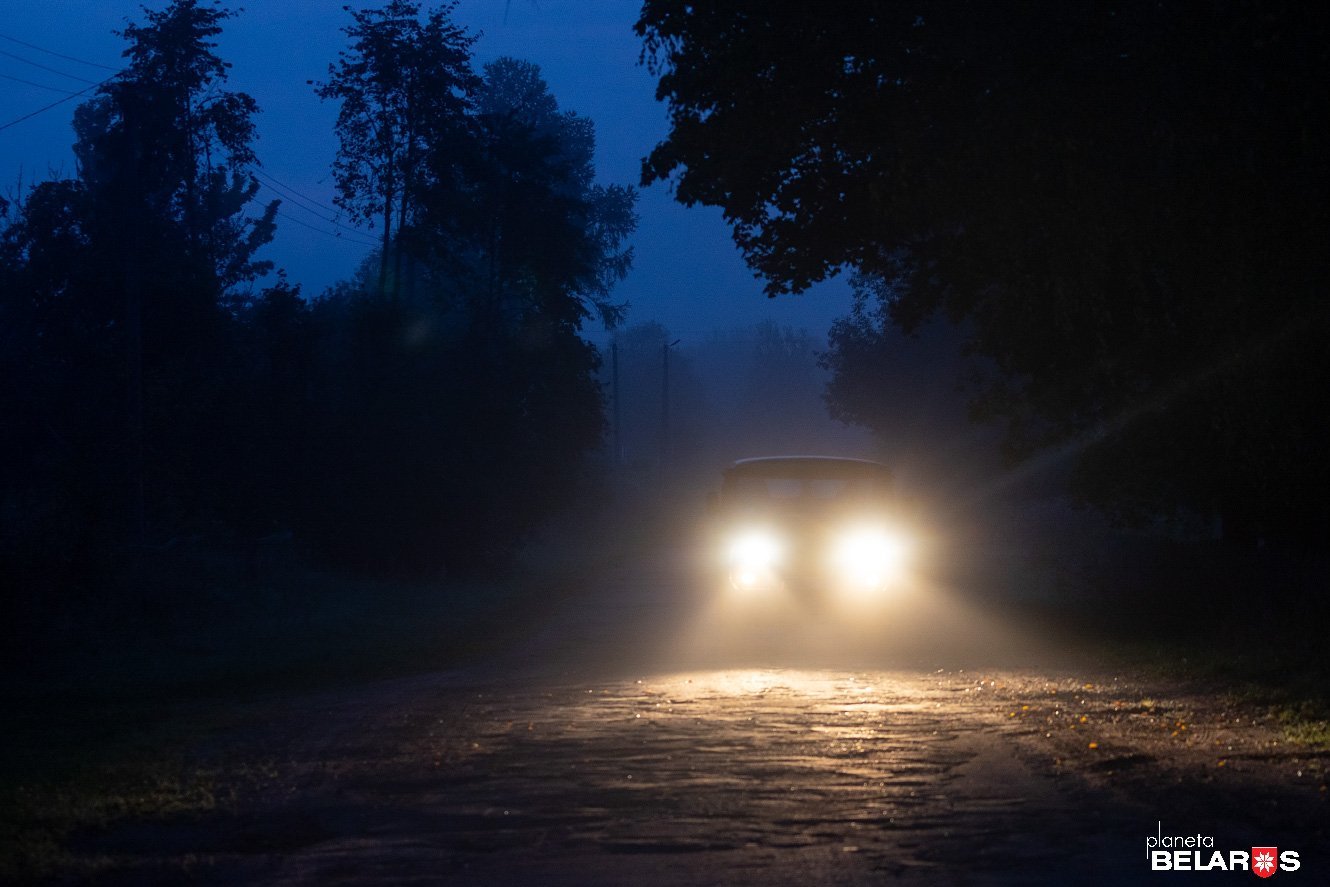 The next morning, I have an appointment at 6: 00 with the second huntsman, whose name was Alexander. He appears very punctually, I take a seat in his UAZ, and we start our trip. It's still dark, and deer are roaring to the right and left. 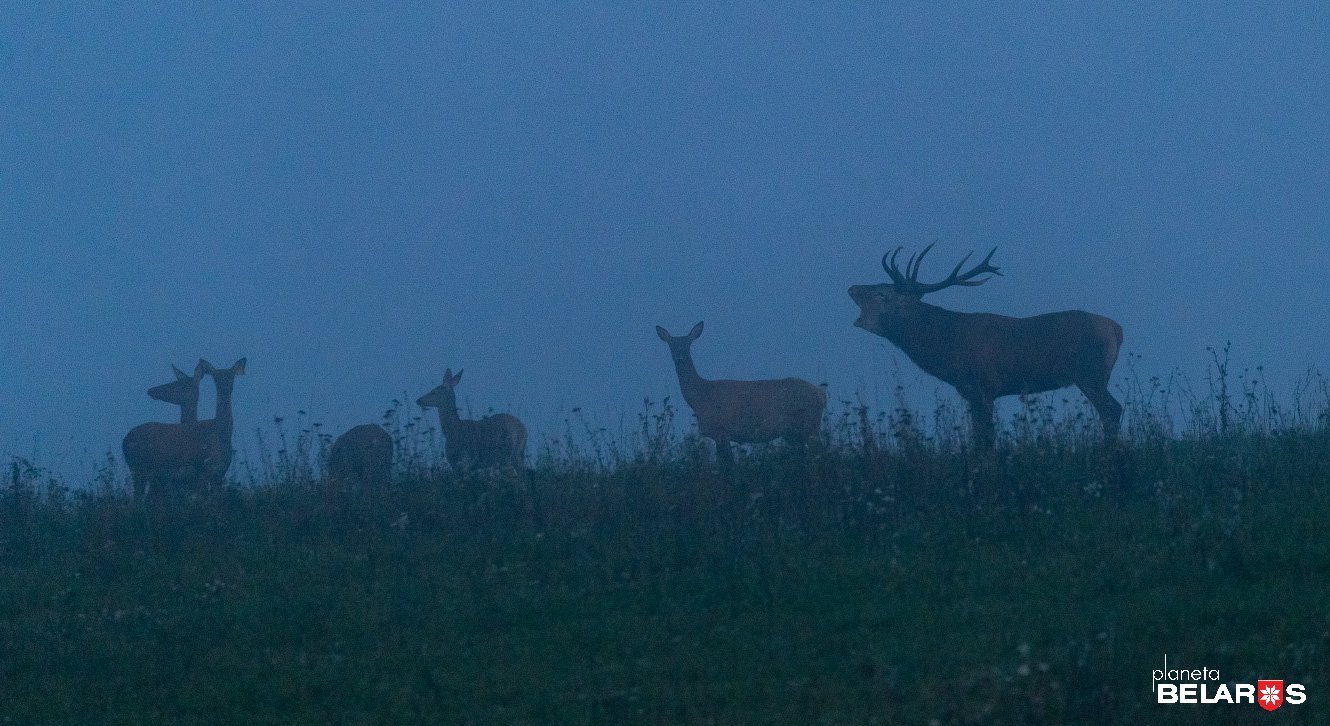 You can even make a silhouette shot against the sky, but I'm interested in moose. 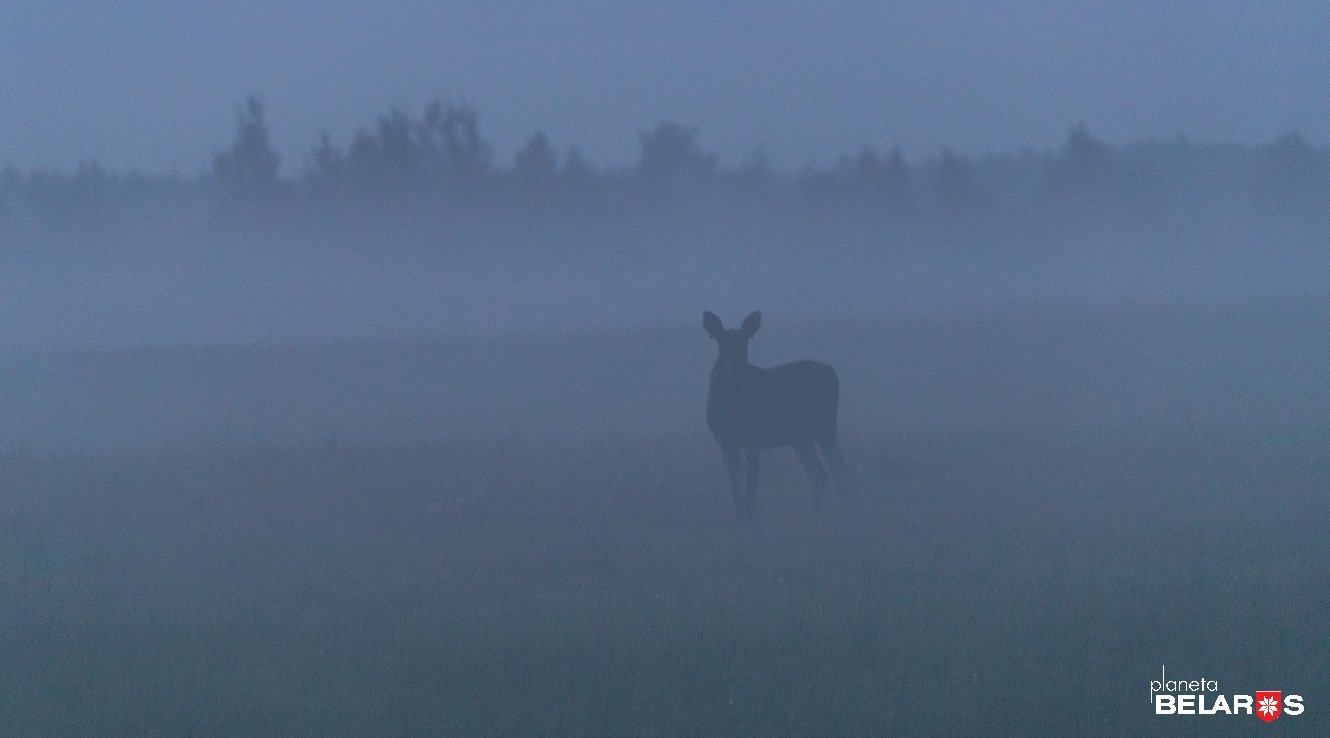 Here is a young male in the fog. 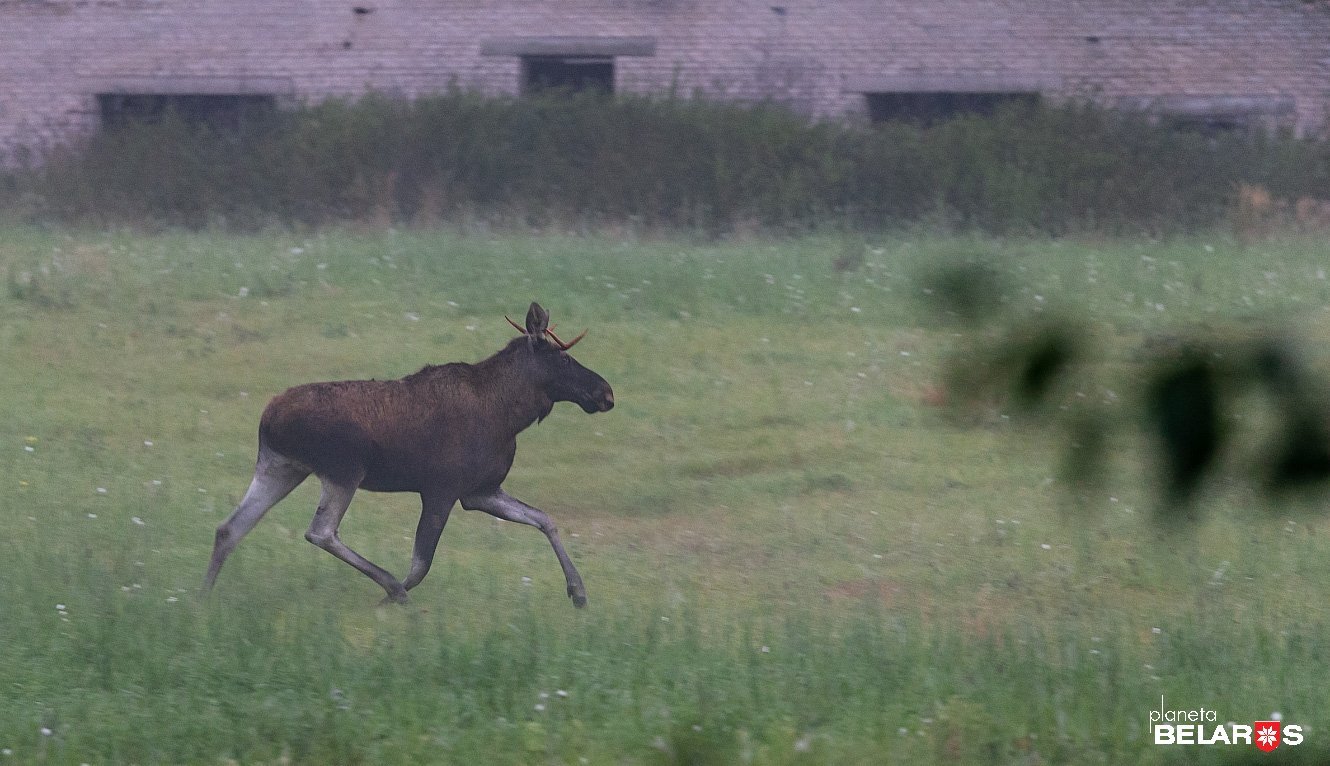 Here's another one running across a field against the backdrop of an abandoned farm. This one looks interesting to me, since the sky is already red in the East, and the landscape allows me to take a picture of a moose on a bright red background. 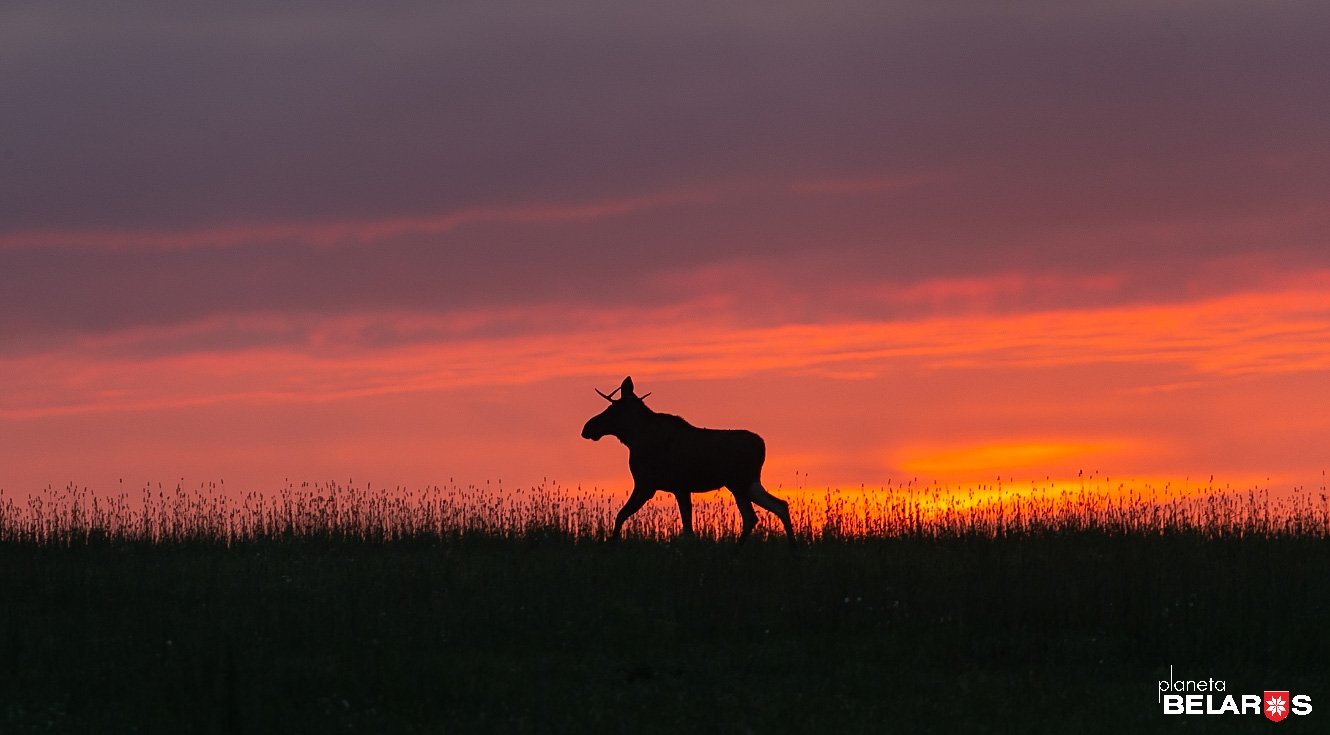 It happens as it was expected: I shift to the left and force the young moose to run up the hill. Of course, if it was a big and old male with huge horns, the shot would have turned out even more spectacular. But we are not in a studio, where there is a line of guys who want to take a photo! We have to work with the material that Nature grants us with.

Dawns. Alexander begins to imitate the calling sounds of a horned moose. 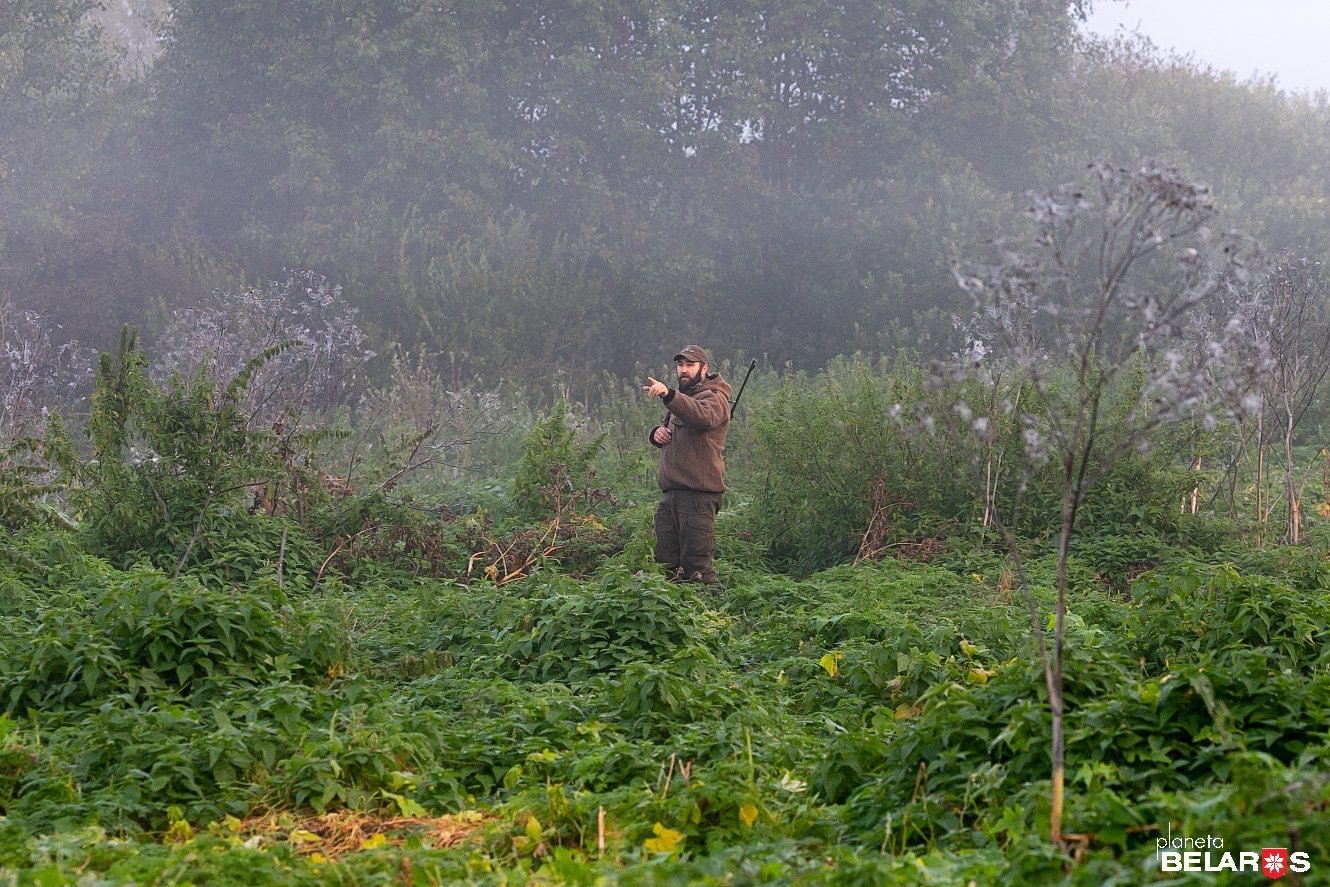 Alexander says there should be a large male. I hear it, too, and move forward. We use the tactics of hunters: the my assistant calls the male, while I’m trying to get in his way.

I hear the male not just responding: it breaks the branches of the shrubs furiously while moving in my direction. I crouch in the tall weeds waiting until the moose comes close enough, and only when it is about fifteen meters away, I stand up to my full height and start taking pictures.

Of course, I have automatic mode enabled, but I only manage to shoot three frames. 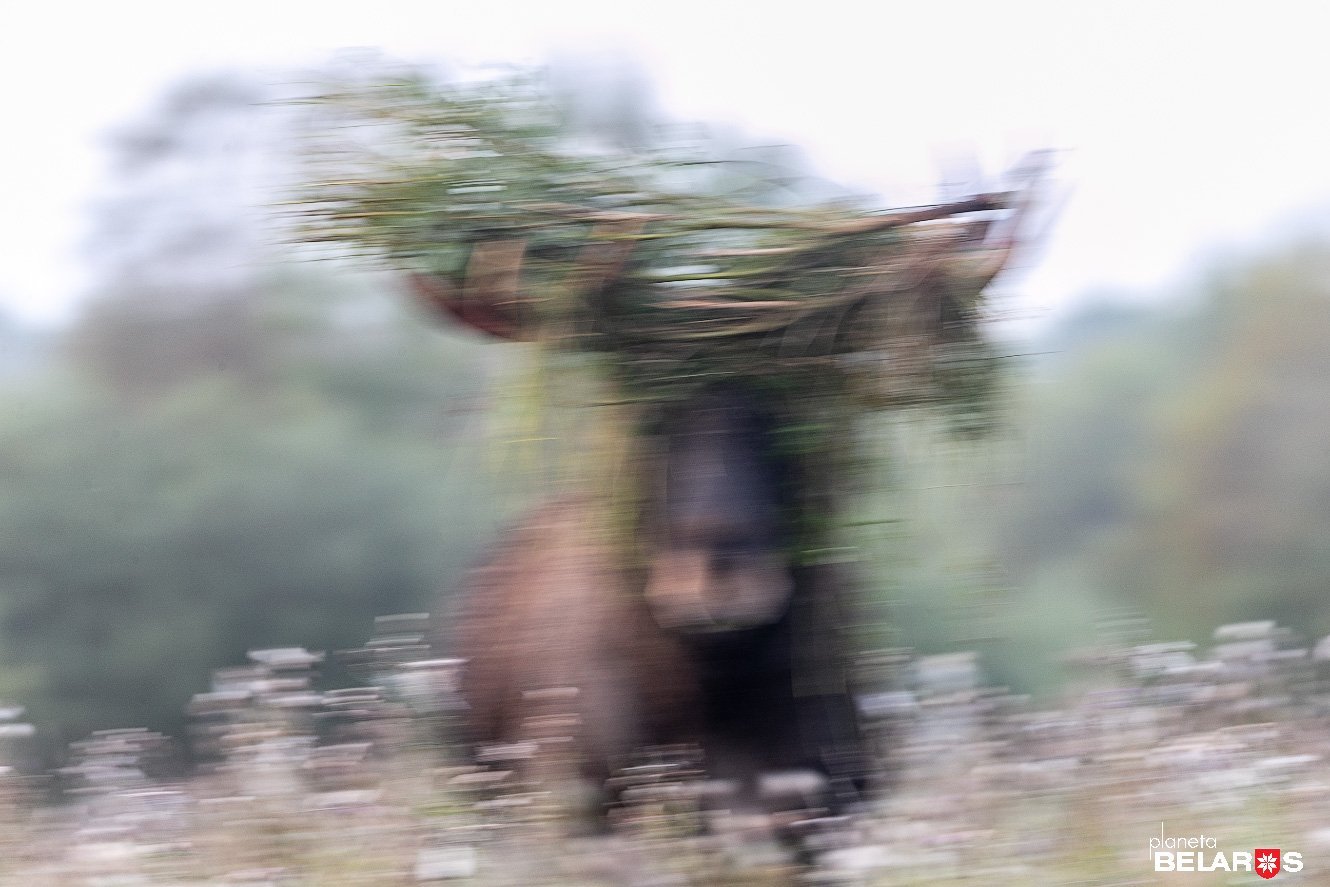 The first one is blurry. 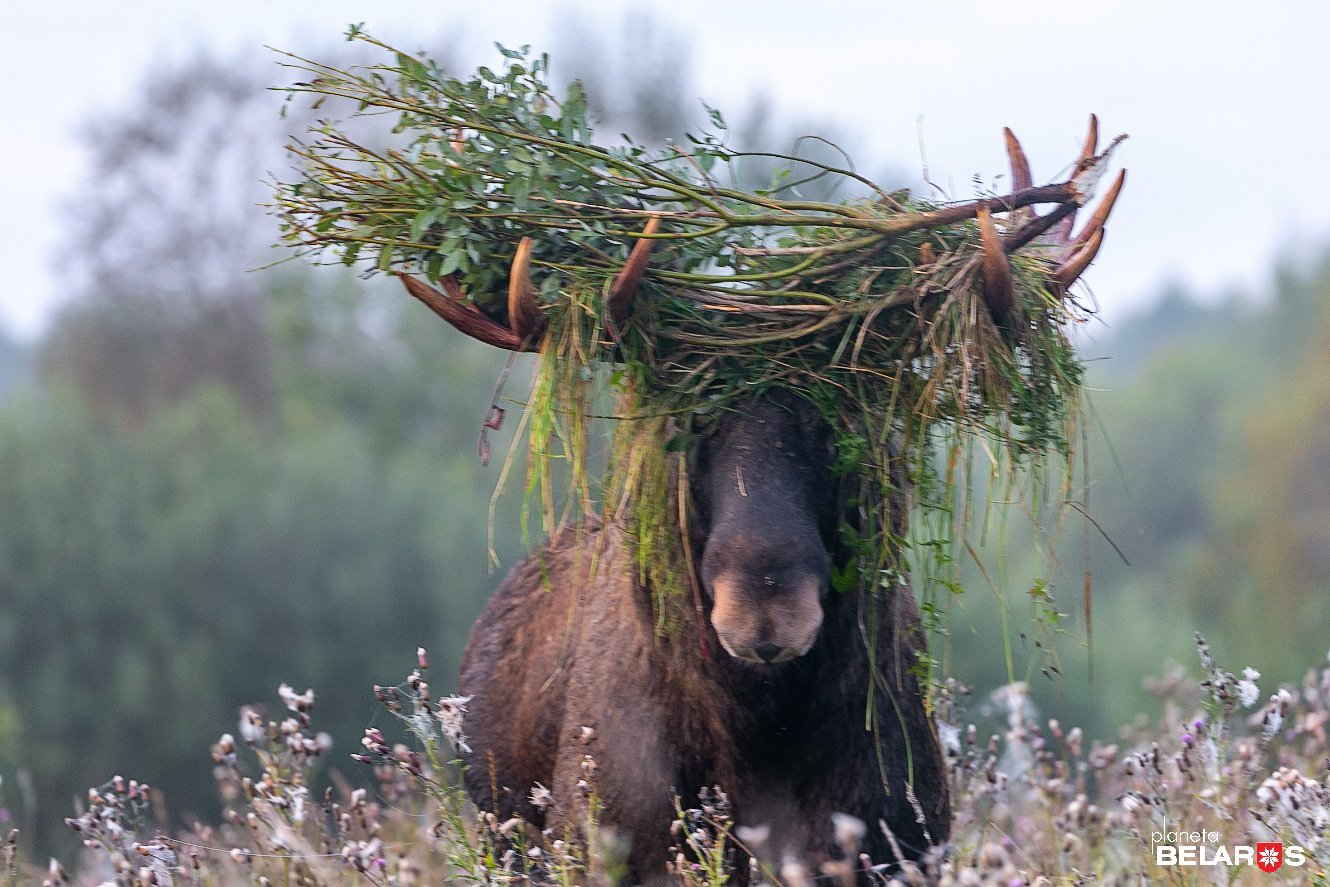 The second is more or less successful: there is a micro – shift, but what a bouquet is on the horns!

The third frame is also blurry, because the moose reacted instantly. 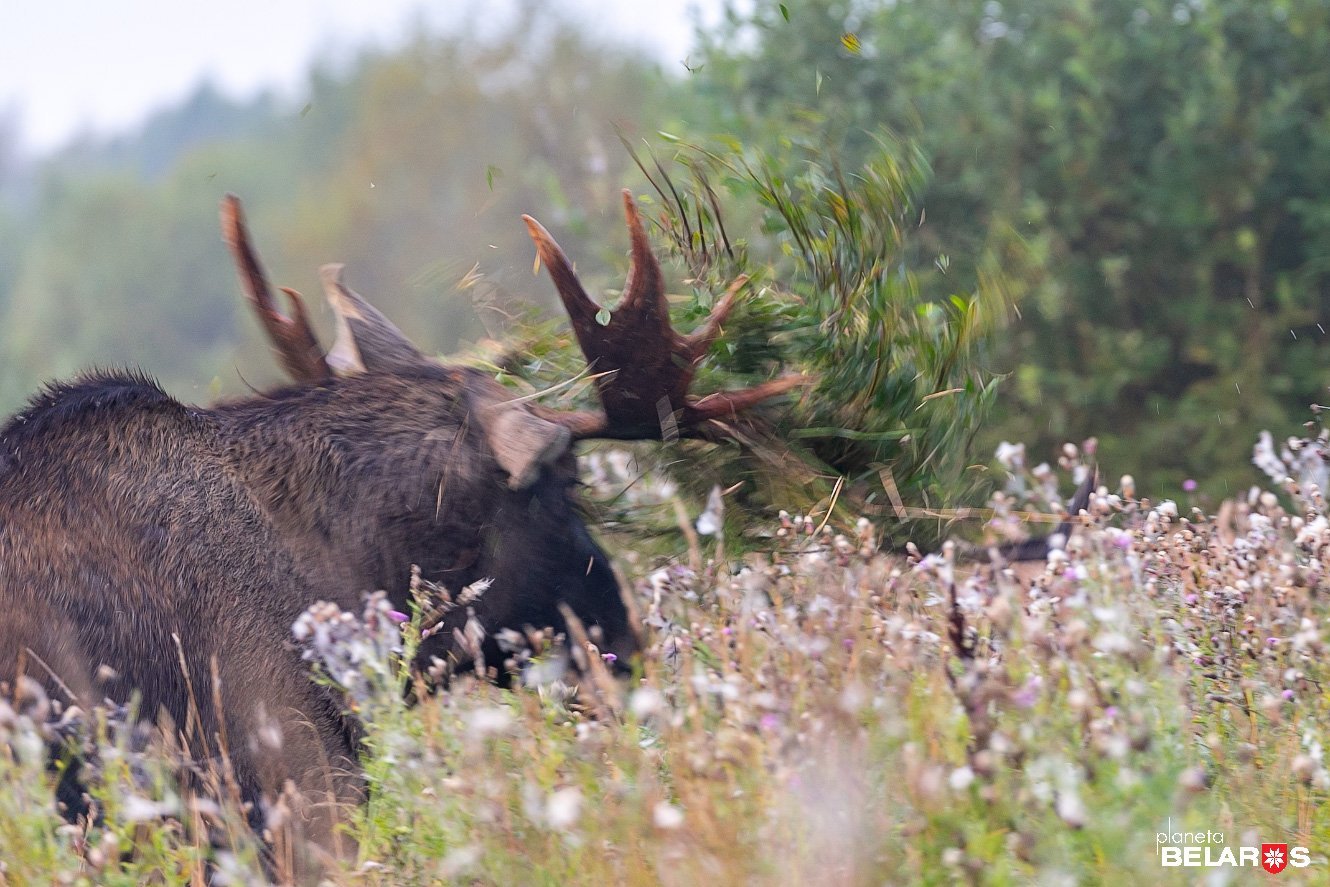 Here it makes a sharp turn; grass and branches drop off his horns.

The moose runs away, the camera does not have time to focus on the animal.

But Alexander calling the opponent (imitating a male moose), then he starts imitating a female. And the bull that has run twenty meters away, stops!

I have an opportunity to take another shot.

Then Alexander and I drive around his land for a couple of hours, but we don't see any more moose. However, we find a large flock of cranes in the field. 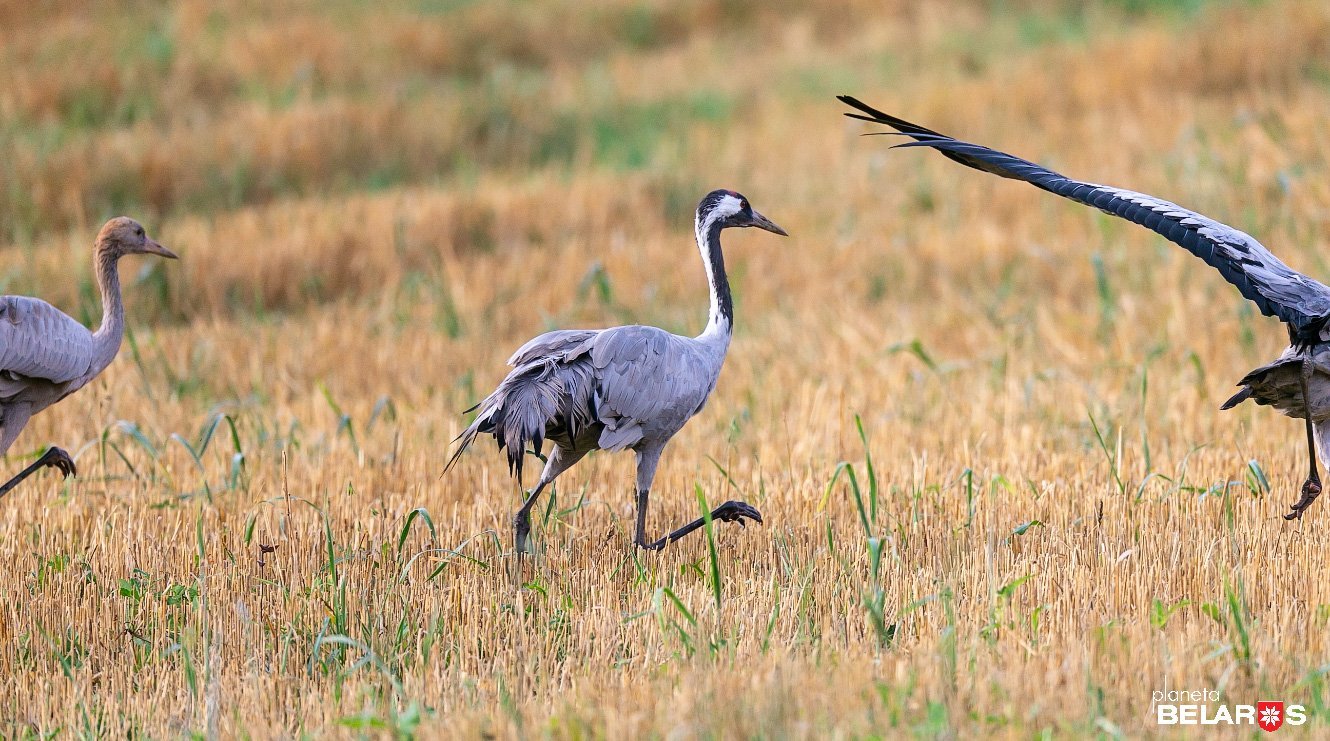 Shooting cranes from a car is not the most optimal way, but some pictures are taken.


After breakfast we travel to Verkhnedvinsky district with Natalia. We take photos of the Orthodox church in Sarye, the Catholic Cathefral in Rositza, and the Sakhonowski oak tree. 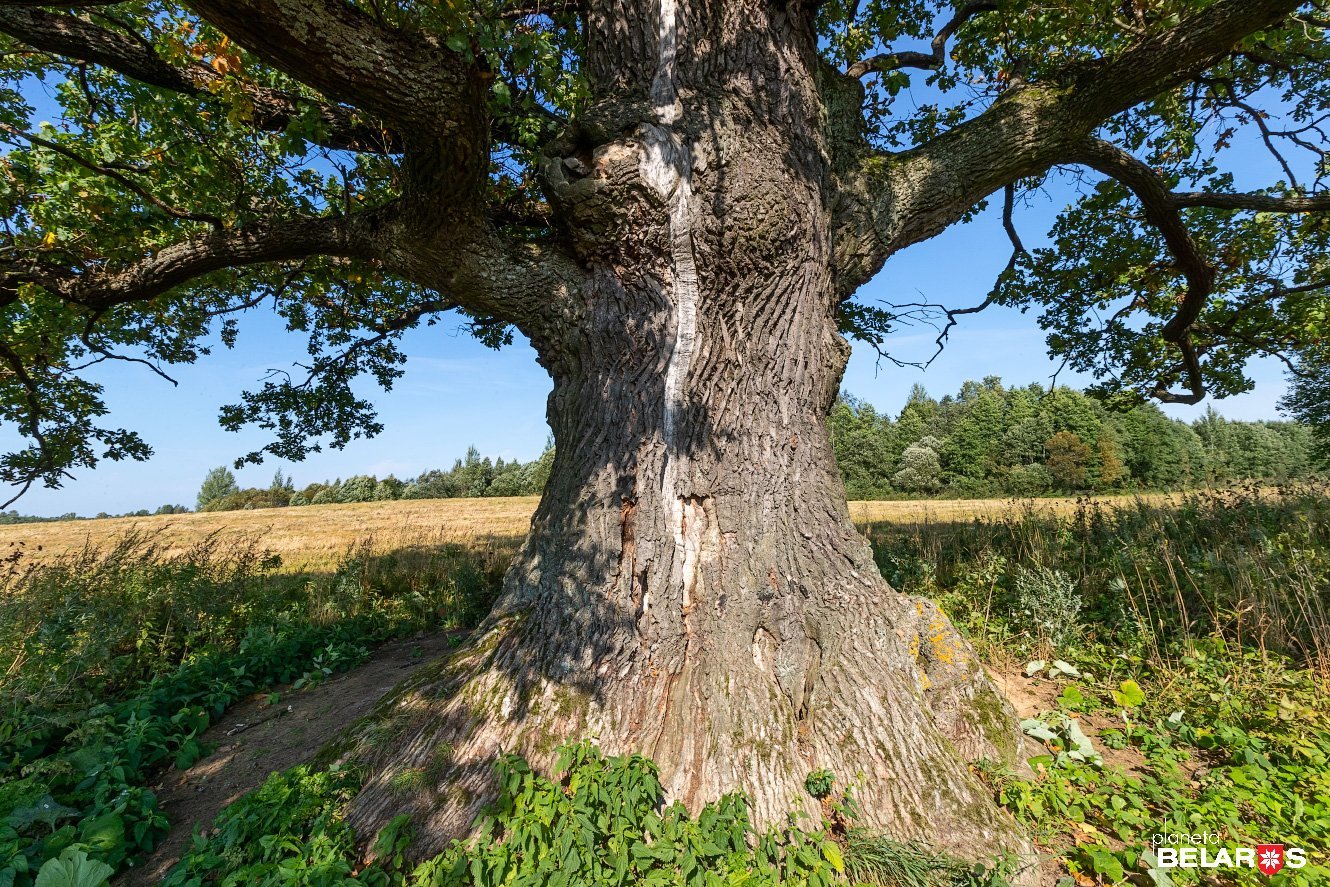 But the most interesting episode of this trip was facing a black stork (Ciconia nigra). 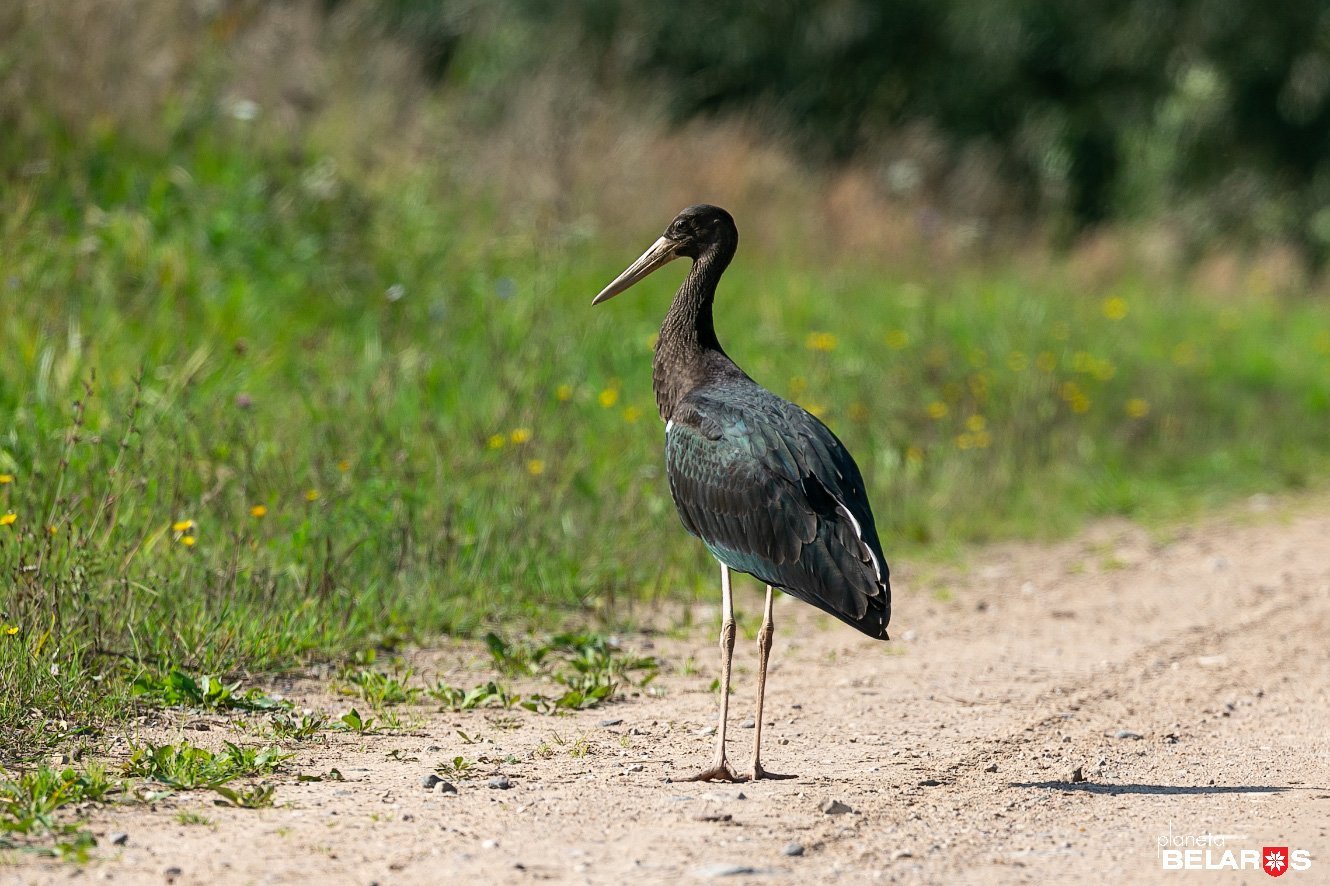 At first it just standing in the middle of a country road; then it started the lunch. 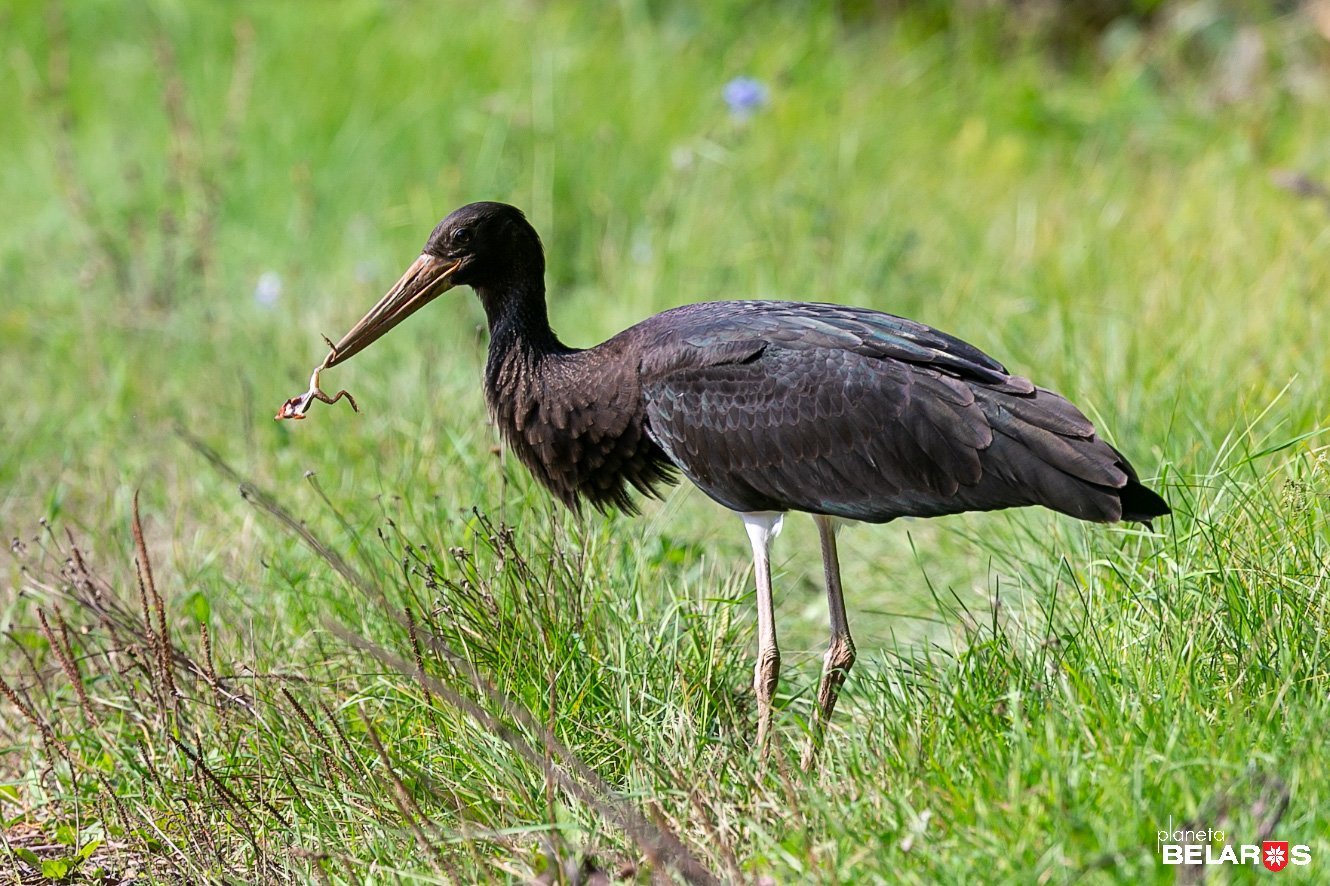 It flew from place to place, we slowly followed the bird and I took some pictures… 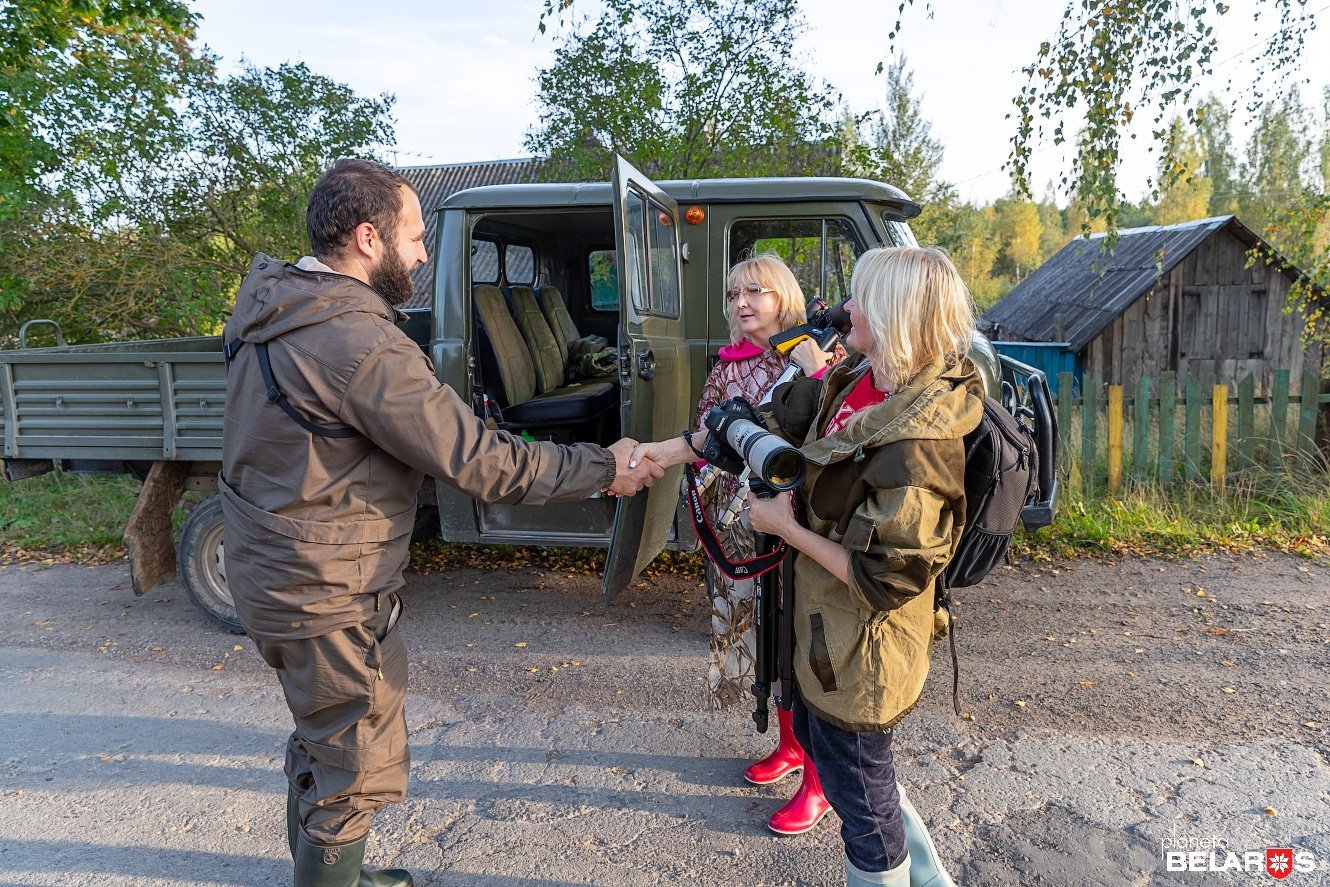 After a lunch at Krasny Bor two friends of mine arrived: they wanted to take a picture of a roaring deer. 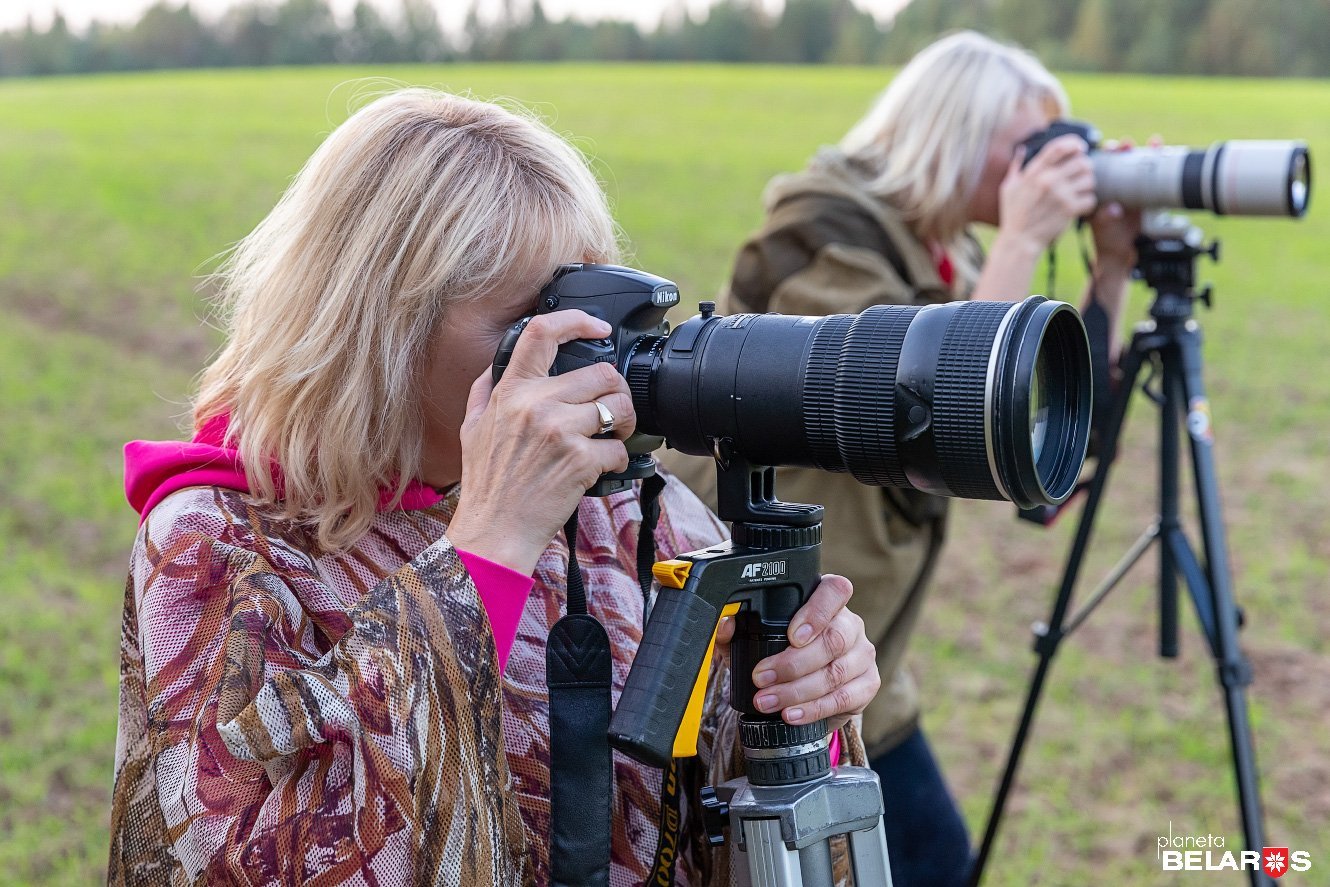 I decided to combine the pleasant things with the helpful ones – both to participate in photo hunting with them, and to take pictures to illustrate the wildlife photographers trips in Krasny Bor.


Here are my friends Irena and Sveta at work.


Here they are crossing a small river to find themselves in a nearby agricultural field.

I don't show here their photos on purpose – we'll make a separate article about those.

I will only share a photo of a tired stag. 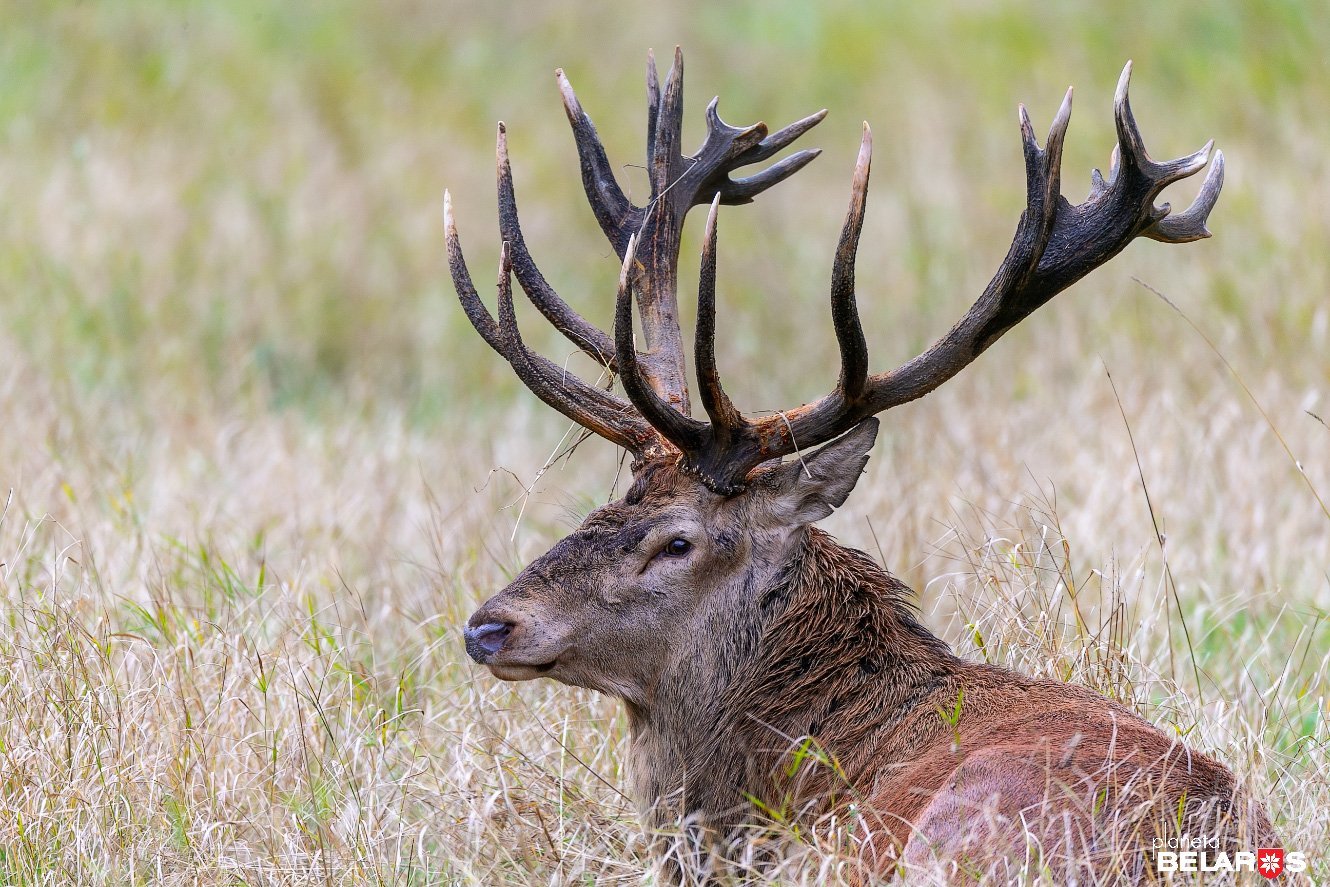 The daytime it was lying near a country road. It must have been a very stormy night for him; as a result he had no energy to run away from our car. 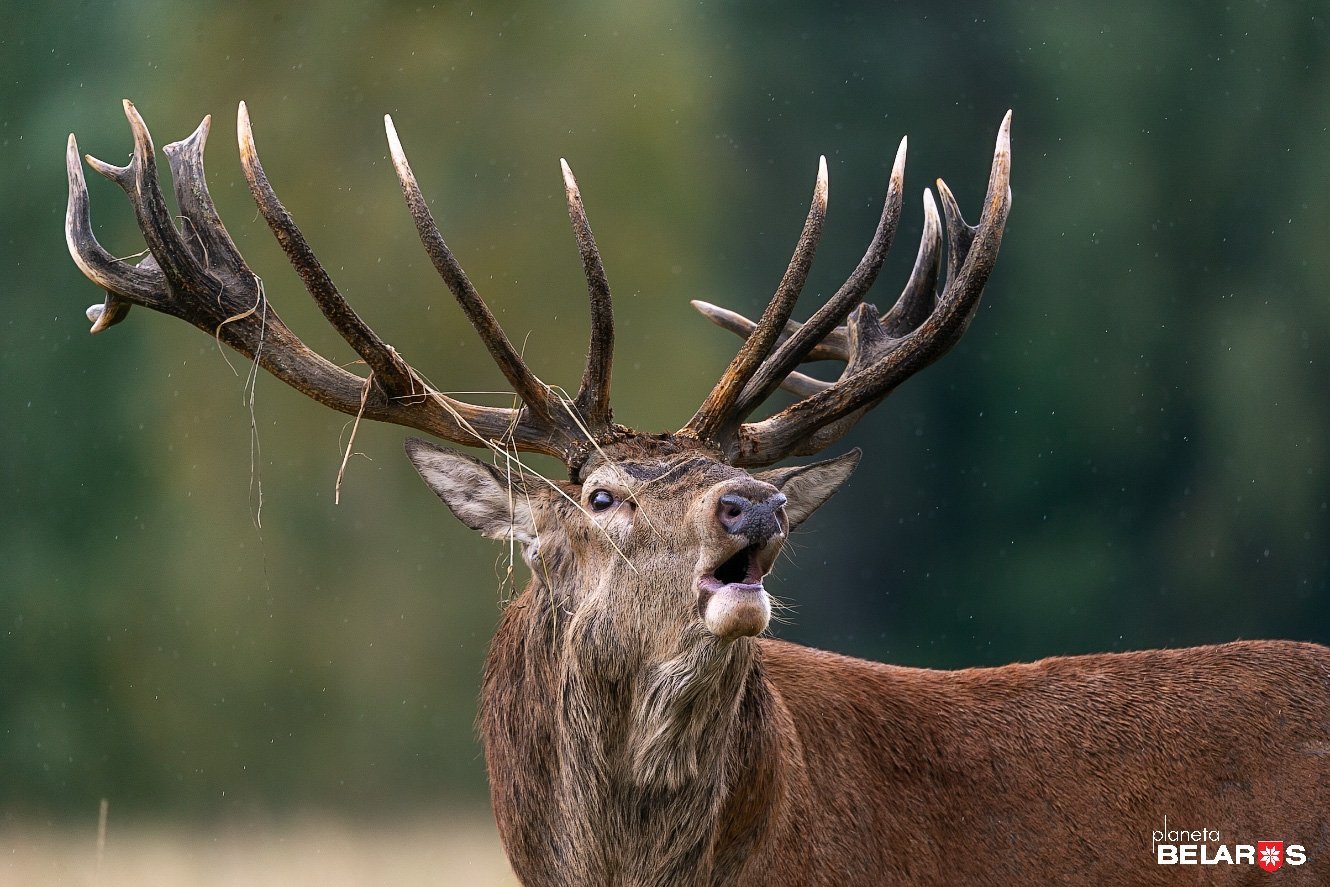 However, he was nice enough to roar a couple of times especially for photographers: indeed, a typical portrait of a deer in September should be like this one…

And here's how our designer Leah Korchazhinskaya used my moose shots. In my opinion, the September calendar page turned out to be very good. And the October one I like as well.

So, a trip to Krasny Bor for moose and deer can be considered as a successful one.

The calendar is being prepared for printing, there will be a wall-mounted version in A2 format and a desktop version. If anyone who loves the Belarusian wildlife would like to have such a calendar, write to us: we can slightly increase the number of copies…

The “dead zone” of Chernobyl: blossoming To shoot blooming gardens, which also had to emphasize the absurdity of the situation and the power of nature, which can correct human mistakes.