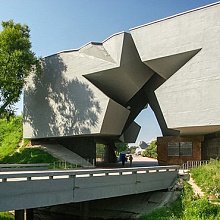 This fortification is one of the most visited tourist places in Brest, as well as in the whole country.

The fortress became a monument to the heroism of the soldiers who were the first to take the blow of Nazi Germany in the summer of 1941. The fortress is a masterpiece of the military engineering and construction: it was built in the 1830s on the spot of the Brest downtown covering four islands. The main and the largest island  (its name was “Citadel”) was surrounded by the solid two-story defensive barracks of almost 2 km (1 1/4 mi) long, and had hundreds of casemates impregnable for artillery. In total, the fortress had four gates, 21 bridges, and over 6 kilometers of defensive ramparts of 10-meter (more than 10 yd) height. Since the very founding of the fortress it was undergoing some permanent improvements, however the construction was not completed up to the beginning of the WW I.

In August 1915, the Brest fortress was occupied by German troops. On March 3, 1918 the Brest Peace Treaty was signed on its territory, in the White Palace. And on June 22, 1941 the Nazi attacked the fortress in a hope to get it in a few hours. The heroic defense of the Brest Fortress became one of the most glorious episodes of the WW II. The remains of 962 defenders of the fortress are buried under granite slabs by the Eternal flame that burns on the Ceremonial square. The memorial complex, which immortalized the memory of their feat, was opened for the 30-th anniversary of the WW II in 1971. (In the Soviet Union and in the today’s Belarus the WW II is called the Great Patriotic War).

After visiting the Museum of Defense in the Brest Fortress (created in 1956) one should definitely have a look at the unique archaeological Museum "Berestye" on the Volyn fortification. This is the place of the original log houses and paved streets of an ancient settlement of the XIII century, which has miraculously survived in the swampy soil along with the household items and culture artefacts of that remote era. Not far from this Museum there are the ruins of the Bernardine monastery of the XVII century, which was a fragment of Old Brest, buried during the construction of the fortress.