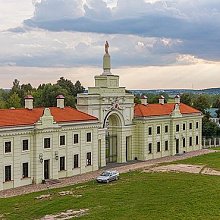 At the beginning of the XVI century Chancellor of GDL Lev Sapega laid a two-storey castle with three towers in Ružany, making it his main residence.

As time passed, the castle was destroyed and rebuilt, and at the end of the XVIII century, thanks to the efforts of the architect Johann Samuel Becker, it became a luxurious palace and castle residence. Kings and ambassadors used to come here, and in the cellars here they say that the treasury of the Grand Duchy of Lithuania was even kept. The northern corps of the palace included the former castle, but the towers were removed and a column portico was added in the style of classicism. The main axis of the ensemble united the palace with the entrance brama, interpreted as a triumphal arch. The side buildings were intended for an art gallery, library (the largest in GDL), arena and theater - the technical equipment of the latter allowed to arrange complex productions with multiple changes of scenery, and in other performances up to one hundred actors and musicians were employed. The architect gave baroque expression to the compositions of the entire ensemble, while the facades were full of classicist decor.

At the end of the 18th century, Sapega was abandoned by the Ružanes and moved to Derechin, and the palace they rented after Sapega's participation in the 1830-1831 uprising was confiscated and transferred to the treasury, but it was still used for production purposes until a strong fire damaged the building in 1914. They were rebuilt in the 1930s, and the Palace of Ruzhany was restored for a short time - after a century's break! - went back to Sapegas. The ensemble was irreparably damaged by World War II. However, thanks to the surviving Becker's drawings in the archives, the restoration of "Belarusian Versailles" began in 2008.

The text of Anatoli Varavva, the guidebook "From Belovezhskaya Pushcha to Polesye Swamps," was used.

Virtual 3D tour of Dmitry Lasko (to expand the window to the full screen, double-click):