Church of the Holy Trinity in Vidzy 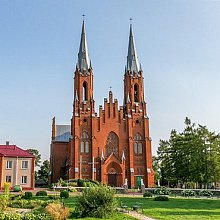 The temple, built of red unplastered bricks in 1909-1913, is one of the tallest religious buildings in Belarus (59 meters). The impressive size of the Trinity Church is due to the fact that at the beginning of the 20th century, the Catholic parish in Vidzy was the largest in Coven province.

After the outbreak of the First World War, in the fall of 1915, Vidzy was occupied by German troops. A few hundred meters from the church was the front line, which stabilized here for almost three years. As a result of the shelling, the neo-Gothic temple was badly damaged. During its renovation in the 1920s, several shell heads were embedded in the walls in memory of the war.

The church was closed in 1948 and turned into a flax warehouse and a gym. In 1989, the temple was returned to the believers and restored.