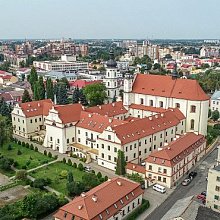 The unique cult complex of the former Franciscan monastery is the only surviving ensemble in Pinsk in the Baroque style.

His memorable silhouette with steep tiled roofs, graceful signature above the Cathedral Church, a four-story bell ringer and figured gables of the seminary is Pinsk's calling card. The Franciscan monastery, one of the oldest in the GDL, was founded in 1396 by the future Grand Duke Sigismund Keystutovich. The wooden monastery burned down many times and was especially damaged in 1648 during the uprising of the citizens who joined the Cossacks. It is difficult to establish the exact time when the first stone buildings were erected on the territory of the monastery. The Church of the Assumption of the Blessed Virgin Mary was consecrated in 1730. The most probable years of its construction are 1712-1730 (but it is not excluded that this ensemble includes earlier brick structures or their fragments).

The church is an amazing monument where the Gothic power of the side walls and the apse are combined with the graceful Baroque facade, the upper part of which is surrounded by an openwork Art Nouveau ribbon. The main aisle of the basilica is adjoined on both sides by chapels. The temple has 7 altars (6 wooden and one knock). The elegant wooden carving, the creator of which is believed to be Vilna master Jan Schmidt and his students, is striking. A real masterpiece - a carved buffalo with a canopy made of a whole trunk of linden. A special place in the church is occupied by a painting by Alfred Romer "The Madonna of Pinska Madonna" (Madonna with bangs), written for this shrine in 1894. The walls and vaults of the church were decorated in the Art Nouveau style by Warsaw artists in 1909. The old organ, consisting of 1498 metal and wooden pipes, was made in 1836. In the crypt under the main altar rests the ashes of the first in the history of Belarus Cardinal Kazimir Swintka. The former shrine of the Franciscans has been a cathedral church since 1925, and in 1996 Pope John Paul II awarded it the status of the Small Basilica, one of three in Belarus.

The bell tower, built in 1817, added another tier in the 1930s and received a new Baroque dome. In the former monastery buildings there is the Administration of the Pinsk Catholic Diocese and the Higher Spiritual Catholic Seminary named after St. Thomas Aquinas, which was revived in 2001. In her cross gallery there are frescos from the beginning of the XVIII century dedicated to the acts of St. Francis.

"The Pearl of Polesie"
Minsk - Lahišyn - Pinsk
All routes