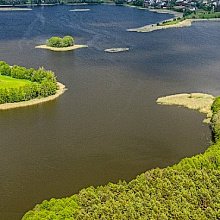 This water body is located 10 km northeast of Braslav and belongs to the Drujka river basin, which in turn acts as a tributary of the Western Dvina. The nearest village is Slobodka, located on the eastern bank. It is crossed by the H2100 road connecting this village with the district centre. The area of the water mirror is 1.49 km2, and the maximum depth is 9.1 m.

In the northwest, the lake is adjoined by agricultural land interspersed with forest and bushland, in the east - by private residential development, and in the south - by the Slobodkovská ozová ridge, which is covered with forest (its height reaches 30 m). In general, the surrounding area is ridgy and hilly.

Poczekh is characterized by a narrow shallow water, which expands only in bays. There are five islands of different sizes. Thanks to the channel, this water body is connected to Lake Nedrovo. The stream connects it with another lake - Ilmenek. Poczek is characterized by a complex coastline.