An ancient cemetery near the village of Jasianiec 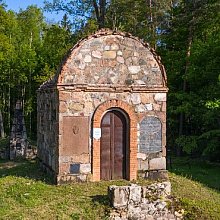 Once upon a time, the Obukhovichi manor was located in Jasianiec, which has not survived to this day. 200-year-old oaks, old linden trees and maples remind us of it. On a sandy hill there is an ancient cemetery, which has been the burial place of the surrounding gentry since the 18th century. Overgrown with tall grass and braided with lush twigs, this cemetery is like a romantic vision from the distant past. Ancestral droplets, tombstones and monuments under which Obukhovichi from Jasianiec, Vendorfa from Golynka, Elenskiye and others are buried have been preserved here. Of particular note is the Wendorf Chapel with a semicircular apse, on whose facades memorable granite tables are mounted.

By the way, the village of Yasenets is also known for the fact that in its surroundings archaeologists found about a hundred mounds covered with dragovites in the XI-XIII centuries.