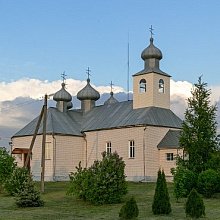 There used to be a wooden church in Malkovichi, which burned down in 1965 as a result of an arson. Its restoration began only after Belarus gained independence. On 17 September 1992, the Church of St Nicholas in Malkovichi, built of silicate bricks, was consecrated. Its appearance can be traced back to the Russian retrospective style, including bulbous heads.