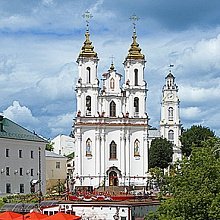 The Resurrection Church was built in 1772 in the tradition of the “Vilna” Baroque by the project of the architect Joseph Fontan.

The funds for the construction were allocated by the Vitebsk merchant Nikolai Smyk. The church was part of the Town Hall (Market) Square ensemble. The architect's task was to erect it on a small plot of land at the corner of two streets and fit it into the ensemble of existing buildings. To accomplish this, the church had to be oriented with the altar to the north.

In 1834, the Uniate church was handed over to the Orthodox and partially rebuilt. After the revolution, it was closed, and in 1936 it was blown up. For the next 60 years, the site of the temple was a green lawn.

In 2000, the restoration of the Holy Resurrection Church began. The reconstruction of the temple in its original baroque appearance was completed in 2009.